The entrance deck with double-height void. Across the harbour is a former prison, built during WWII, that O’Sullivan describes as “fascinating and well worth a look”.

Michael O’Sullivan seems to be the quintessential DIY Kiwi architect of old. Not only has he designed his new architecture studio on the hills overlooking Lyttelton Harbour, he has battled all of Canterbury’s weather conditions to construct it, acting as project manager, carpenter, surveyor, and lighting and landscape designer.

Kevin McCloud of Grand Designs would have revelled in filming this build; cue a pan-in shot of O’Sullivan’s grimacing wind-blown face as his large frozen hands anchor steel ties from the roof to the external wall, while an Antarctic breeze draws in from the south and threatens to swipe off the entire roof and send it down the hill. (Pan out.)

Justine Harvey: Your studio is based in Auckland, why did you want to take on this unconventional architectural process to build another studio in Christchurch?

Michael O’Sullivan: We were doing work with Fletcher, fixing up broken chimneys and repairing people’s broken houses through the EQC and EQR formula. It was a nice thing to help people but, after a year of spending nights in dreadful motels, we thought ‘stuff this’. We were asked to look at designing a house on a section and, when I first went to have a look, Lyttelton reminded me very much of where my dad had come from in Ireland and I thought it was quite lovely.

JH: Where did he come from and why is it similar?

MOS: Castletownbere, at the bottom of Ireland [in County Cork]. The drama of this big masculine landscape, the port and the harbour. Then, in the village, you have these quaint little cottages that are also similar to some of the beautiful suburbs in Wellington. I just found it much more provocative than the flat of Christchurch’s grid.

JH: Lyttelton was originally a Scottish settlement and I imagine the Scotch housing was similar to what you might have found in Ireland.

MOS: Probably but most of them were uninsulated.

JH: I guess they just kept chopping trees down and burning them to keep warm.

MOS: Perhaps that’s why they’re so attached to these chimneys; they have about 200 of them. So we were working on a modest house on this lovely section and the one next door was available and it was cheap – $130K or whatever – so we decided to build an office and establish ourselves down there in the hope that we would gain more work in the area and use it as a satellite office. We were using motels two or three times a week so it seemed like a good idea to have a space to bring clients, to receive people in a manner in which they can see the way we think.

JH: So you built it yourself; did you have any help?

MOS: In the early stages, I had one of my sister’s boys from Westport, who’d drive over on a Friday night to help, and there was another guy I went to primary school with, who I bumped into at the airport and was keen to help. Some of the guys from the office flew down to help too. But most of it was me by myself.

JH: What was the process?

MOS: We built a shed first and brought all the tools down from Mangere. We welded up a double-axle trailer, bought an old truck, put all the tools on it and drove it down. We lived in this uninsulated shed while we were building the studio. I look back and wonder, “How the hell did I do that with no toilet and no running water?” It wasn’t great but summer was lovely; you could go for a swim in the ocean at the end of the day. I would take the 6.00am flight from Auckland on Friday and return at 10.00pm on Sunday; I did that every weekend last year, except five. And I’d work at the university [The University of Auckland’s School of Architecture and Planning] from Monday through Thursday.

JH: Why did you decide to build it yourself?

MOS: It’s a lot more satisfying than it is to sit behind a computer, plus we couldn’t get a carpenter down there and also the cost. A lot of it was prefabricated in Mangere and taken down in three container loads: all the windows, the steel joinery and the furniture that we built. Everything else was built on site. Every weekend we’d schedule the next week and, on Monday, we’d place orders with the local supplier and he made sure that, at 9.25am on Friday, everything turned up. It was an exercise in scheduling and coordination that actually went really smoothly.

JH: What was the starting point for the design?

MOS: It had to be efficient, small and affordable: not necessarily in that order. It had to sit at the top of the site to be in proximity to the services and to embrace the gesture of the big view into the harbour. And, on the road side, it needed to be robust enough to resist any further loose rocks coming down the hill and to maintain privacy. I wasn’t worried about garaging cars. It’s really a monastery.

JH: It must be a totally different experience from being in your Shortland Street studio in Auckland.

MOS: Once you’ve arrived down there, you categorically have to give yourself an hour to fall asleep. It’s so beautiful as a retreat. I’ve been doing some conceptual work down there and it’s great having the accomodation underneath the studio. We’ve had a couple of master’s students from The University of Auckland, who are currently working for Fletcher, who’ve been staying there for a few months, and we’ve had other groups of architecture students stay there.

JH: Do they pay you for accomodation?

MOS: No, they just keep it clean and make sure it’s all ready to go when we come down for meetings. They just pay for the gas, power and the bar bills.

JH: Did you change things as you went along?

MOS: Yes, we changed heaps of things as it evolved. The beauty of doing it yourself is that you can see things on site that go beyond the drawings. It amplifies the end result if you’re there all the time. You gain the finer understandings of the environment: sun, wind and views. Plus, compression and expansion inside the space: at one stage, we had this little slither of an elevated void that made sense in the drawing but, when you started building, it was just mean. So we opened it up to make it more proportionately appropriate. All manner of adjustments were made but that was probably the biggest one.

We also had to create ease of building on such a steep site; it was important to minimise wasted energy so I changed the cladding materials. I’d also specified using beams around the decks, taken from the wharf as they were wrecked in the earthquake, but manhandling them was prohibitive so we binned that idea. And even things like buying our own scaffolding, instead of hiring it, was cheaper, although it makes for an interesting procedure if you’ve never done it before. Some guys wouldn’t use it so I had to give them a tummy rub and back pat and say, “You’ll survive”.

JH: I read somewhere that your dad was a carpenter. Did you learn from him?

MOS: Yes, the old man built big infrastructure projects – bridges and commercial buildings – and, as kids, we went along and helped out. We learnt heaps on site with him so every weekend I took one of my own kids down to help work on the building site. The lineage of the office space was based on the way we do things. You arrive at a dramatic double-height void, then you’re taken through from preliminary design to developed design to working drawing presentations.

JH: How did you deal with working outside in the harsh weather?

MOS: In the middle of winter, it was freezing. Sometimes it was like horizontal sleet. When welding, it’d take ages to strike; you ended up having to heat up the rods to get the moisture out of them and ready to go… It was a shit load of work. I can’t believe I did it in a year. You watch a weather front roll in and go, “Okay, we’ve 20 minutes to put everything down,” then the weather would roll in and go ‘bang’; it’d hit you. People would drive past and say, “What are you doing?”

JH: I guess you really value a place once you’ve gone through that to create it. It’s interesting that some architects like to build for themselves and some don’t.

MOS: It’s not for everybody.

JH: Perhaps, they think they might change their minds so much it’ll never be finished. If there’s a client at the other end, you have to finish it, whereas, if it’s for yourself, it’s never ending.

MOS: When you’re living in that shed, I tell you, you make decisions pretty quickly.

JH: Well that’s the way to do it then. 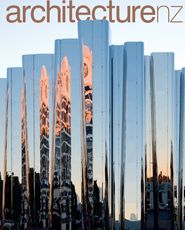 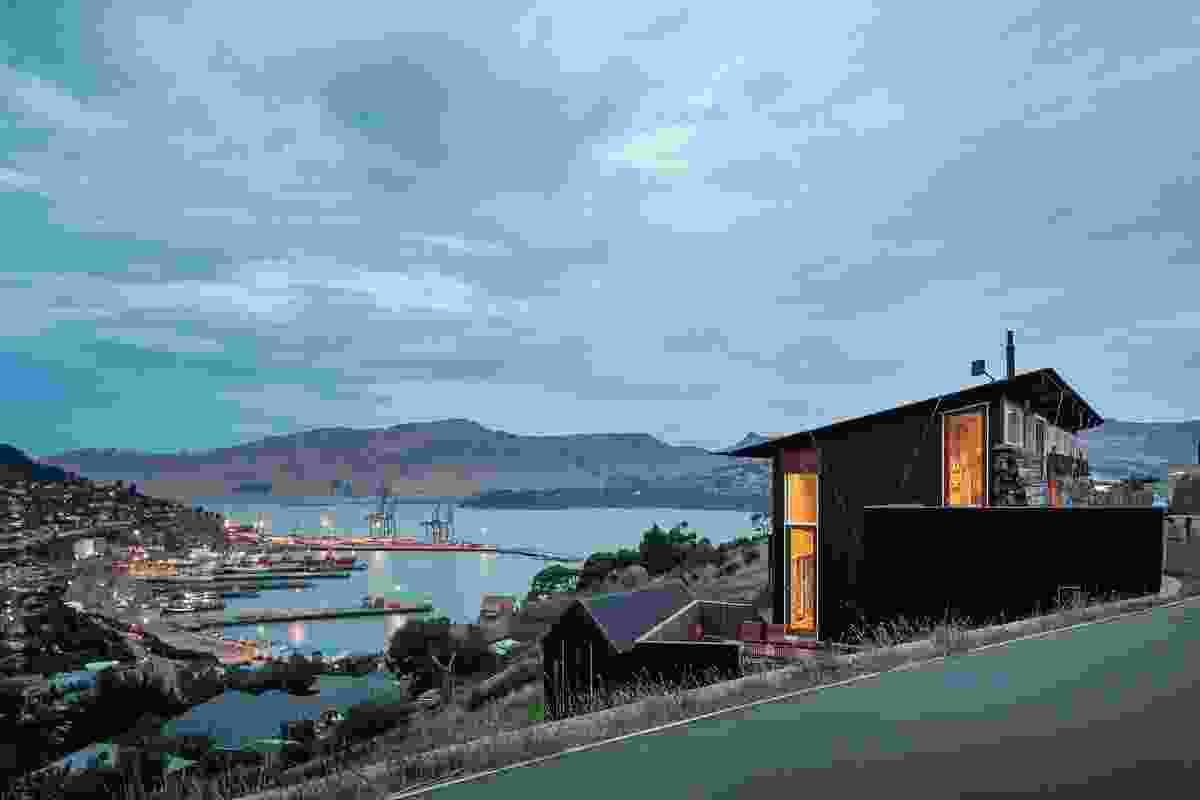 The entrance deck with double-height void. Across the harbour is a former prison, built during WWII, that O’Sullivan describes as “fascinating and well worth a look”. 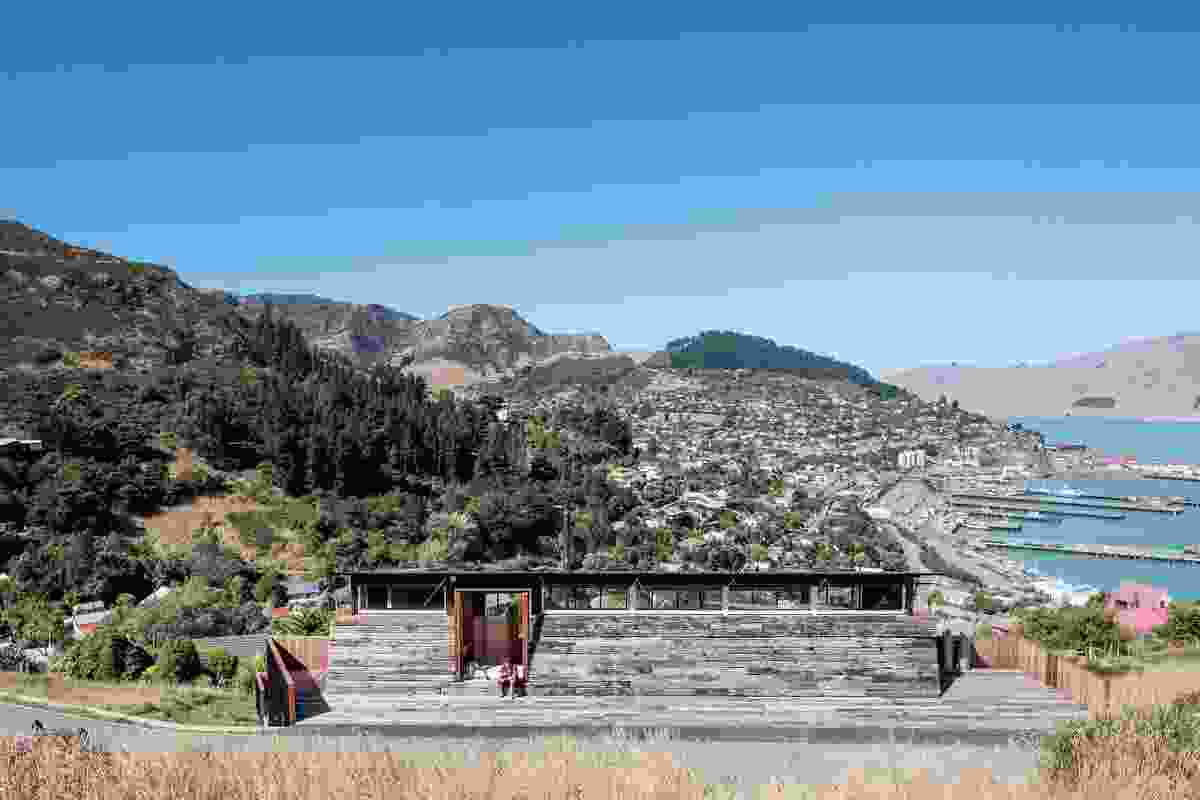 The western elevation at the top of the site needed to be robust in the event of rocks coming down the hills behind the site. The façade utilises weathered but robust timber taken from an old wharf at the nearby port. 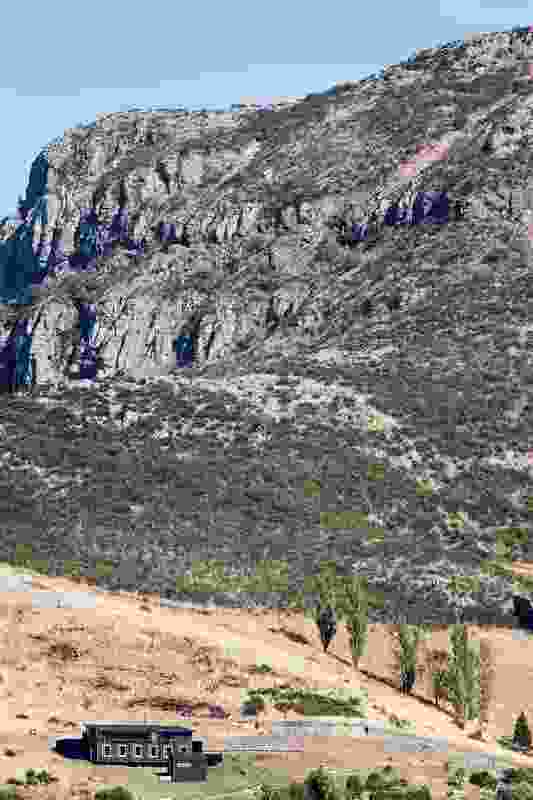 Sited overlooking Lyttelton Harbour, with a goat farm in behind, the O’Sullivan Studio is a beautiful location for an architect’s office. 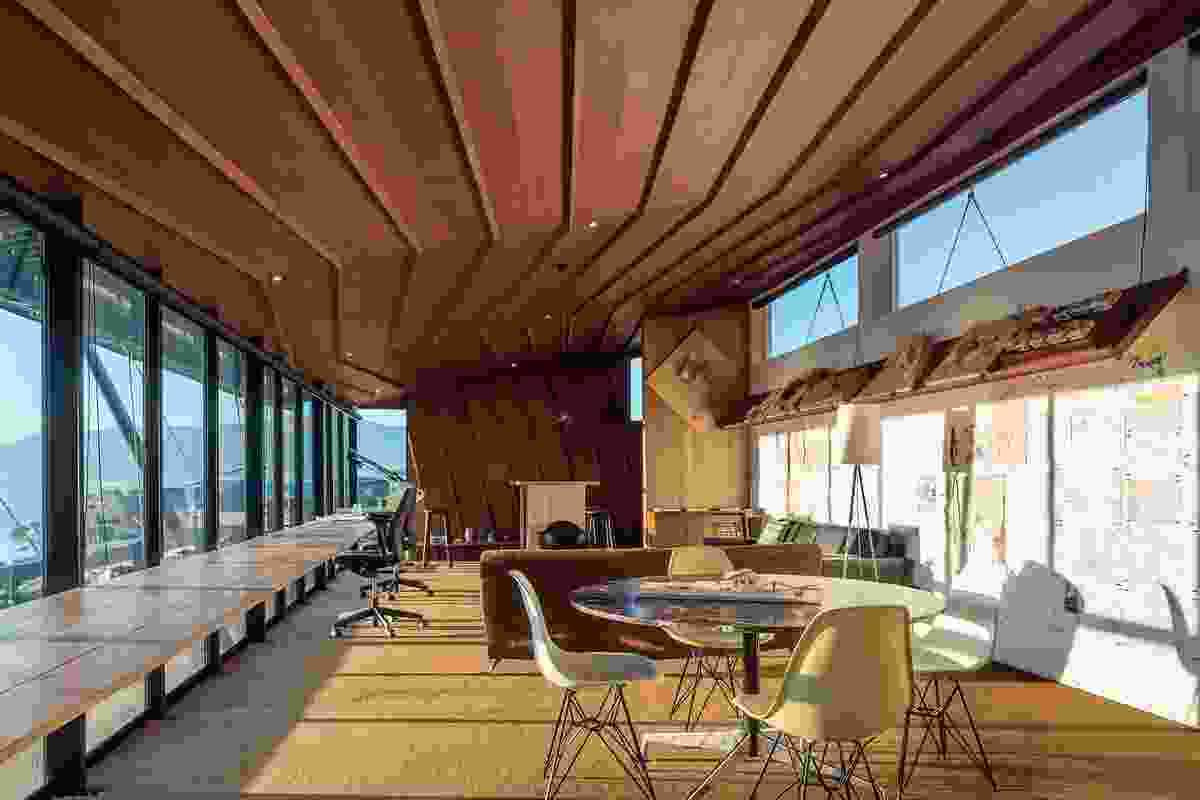 The folding ceiling references neighbouring hills and is constructed in quarter and crown cut mahogany. O’Sullivan designed and built the timber furniture; the workbench against the window is a Miesian detail. 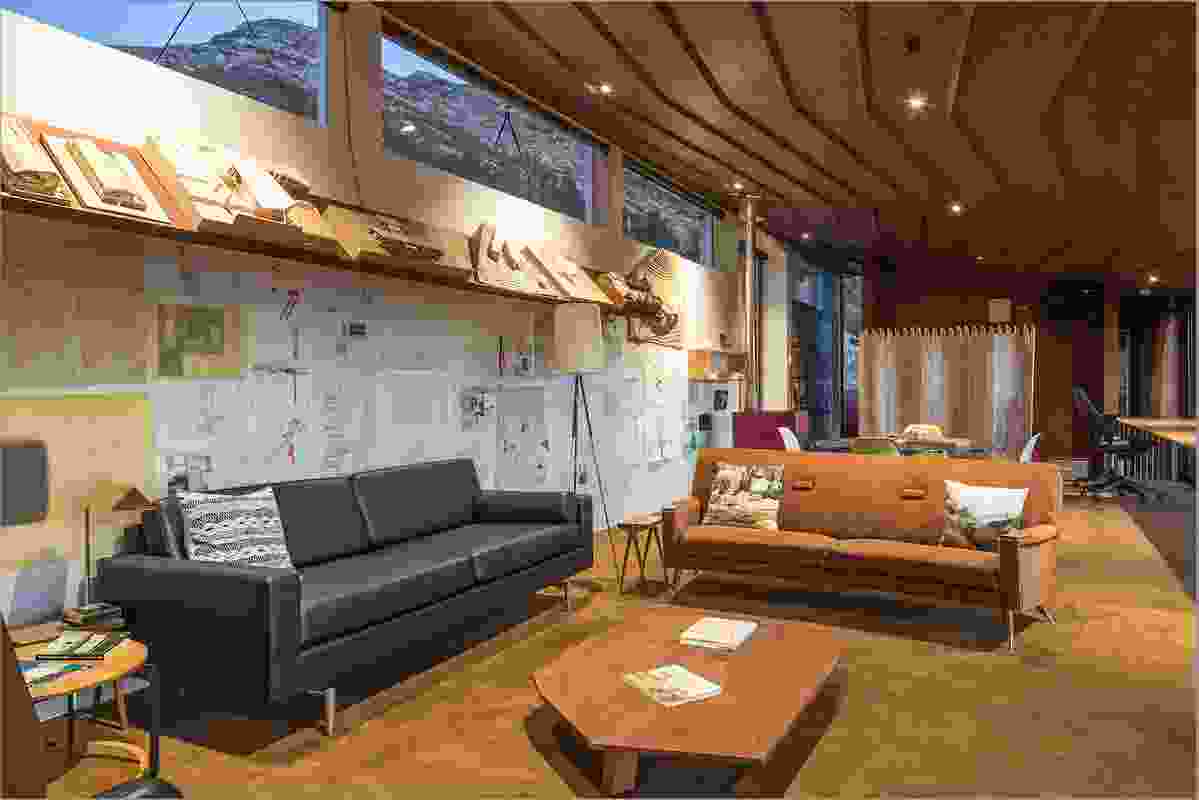 The lineage of the office space relates to the architectural working process. 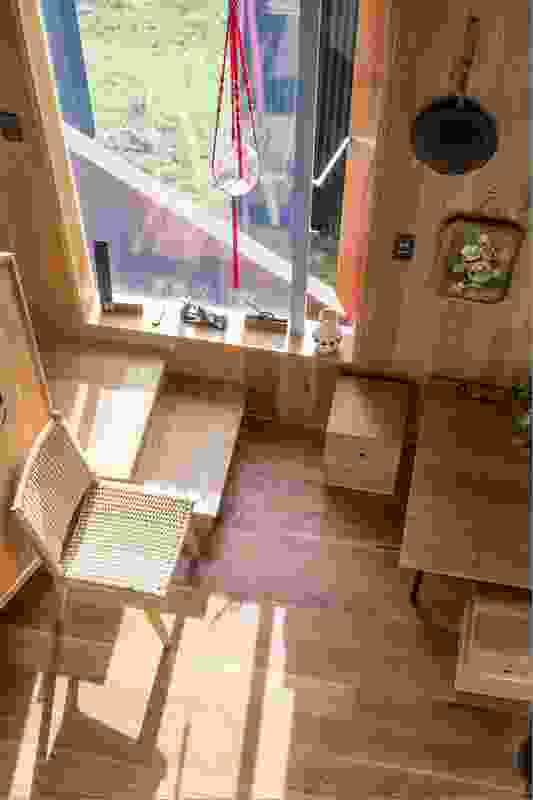 The accommodation underneath the studio gets plenty of sunlight. 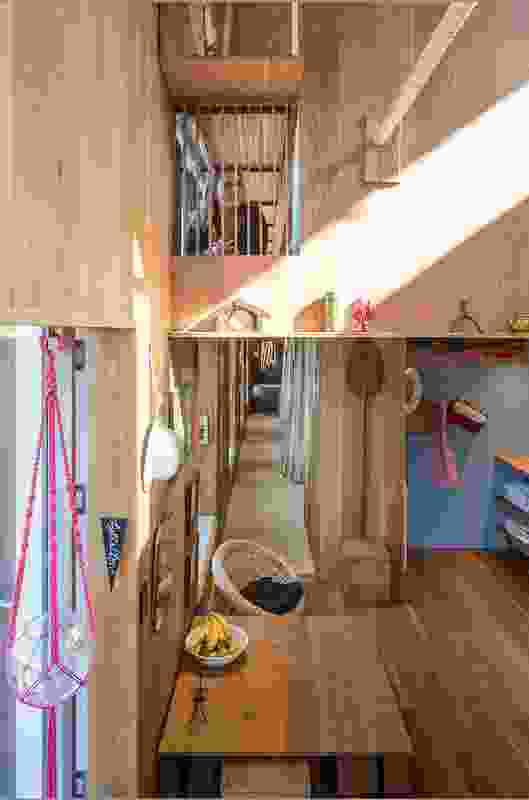 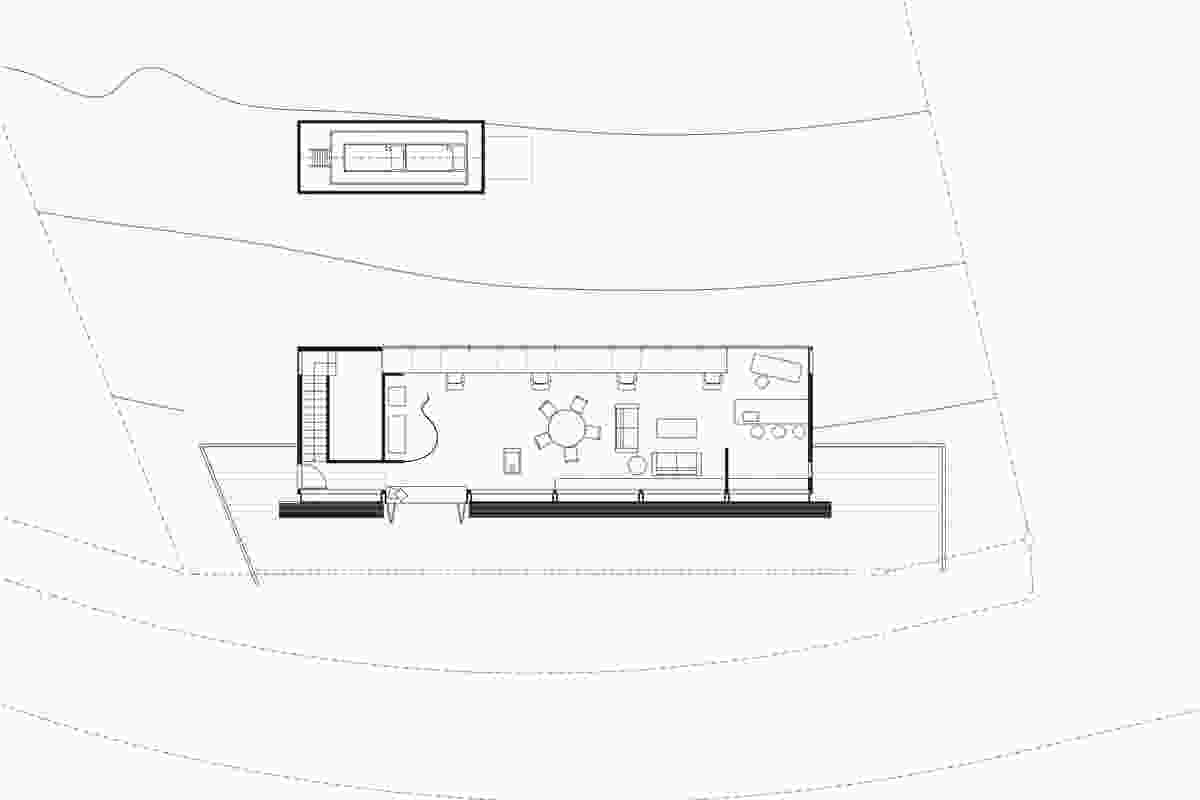