Recessive yet bold: Outside In House

This purposefully recessive, distinctively contemporary alteration and addition to a rundown bungalow by MODO celebrates the house’s architectural lineage while providing room for modern living.

The rear extension is articulated as a distinctly new pavilion, maintaining a respectful distance from the old house.

With any alteration and addition project involving an old house, the extent to which the existing structure should be physically changed and extended is somewhat of a dilemma. On the one hand, one could argue it is not worth all the effort (and money) to repair a tired, slumping, wobbly old building designed in and for a different social milieu. On the other, these longstanding structures connect us to the relatively recent past and retain significant cultural value, reminding us of how things were once done as well as being vessels for the memories of those who lived there before. In the case of the fourth owners of a rundown, two-storey, vaguely Queen Anne style home in Melbourne’s bayside suburb of Williamstown, the desire to maintain the integrity of the old house and the stories that came with it led to the conception of a set of purposefully recessive yet boldly contemporary alterations and additions that accommodate the modern needs of the family of four.

The primary addition is in the form of an approximately fifty-square-metre extension to the rear. On first impression, this new addition does not seem so different from a typical open-plan backyard reno containing the standard suite of kitchen, dining and living areas. However, the careful manner in which this deceptively simple white box has been composed and positioned sets it apart, in both a comparative and a literal, physical sense. The extension is articulated as a distinctly new pavilion that is deliberately positioned just next to the old house, careful not to touch it too heavily, maintaining a respectful distance, as it were. This separation is expressed (and made watertight) with a metre-wide strip of thin steel-framed glazing that affords views down to small pockets of revegetated garden, up to an ornate dormer window of the old house and beyond to the brick chimneys and terracotta gargoyles of neighbouring roofs. This gap, along with the stark white material finishes in the pavilion, works to frame the old house as a distinct ornate structure, while from a functional point of view it permits a wash of natural light into the rear rooms.

An element that further enhances this sense of distinction between the old and the new is the matter-of-fact way that the external weatherboards and timber windows of the existing house have been preserved along the rear interior wall of the new pavilion. The weatherboards also add necessary acoustic attenuation and visual texture to the largely plain surfaces of the open-plan space. At the southern end, the weatherboards are cleverly incorporated into the finely detailed kitchen joinery, subtly blurring what is old and new, interior and exterior, and cladding and cupboard door.

A small room created in the centre of the thoughtfully reworked existing residence spatially connects the house to the extension. Labelled on the plan as a library, this space also acts as an entry lobby, a fireside sitting area, an indoor plant nursery and a spatial funnel that directs light borrowed from the extension into the depths of the old house. Mounted on the northern wall of this room are a series of thin, white, folded-steel shelves, behind which is the housing for a frameless glass pocket sliding door that when closed provides acoustic separation between the public zones of the ground floor and the private domain of upstairs. Much like the design of the pavilion itself, both of these new insertions are as thin and recessive as possible to allow the unique qualities of the existing house to proudly sit forward.

The ground-floor rooms of the old house have been meticulously restored to celebrate and highlight the spatial and ornamental features of this particular style of house, including the tall ceilings, intricate leadlight windows and dark-stained timber wall panels and strapping. The grandeur and darkness of these spaces perfectly complement the brightness of the upstairs and the restrained whiteness and humble scale of the new extension.

I spent some time looking around and discussing the project with the owner (who is also the builder) and one of the last things he said to me on my way out the side door was, “Could you mention Jimmy in the article?” Jimmy was the site supervisor for the construction and largely responsible for the fine craftsmanship evident in the repair of the existing house, having carefully disassembled, labelled, sorted and reconstructed large parts of the building that had fallen into disrepair over its ninety-or-so-year lifespan. Jimmy and the rest of the build team – owners, garden designer and architect – should be greatly commended for the respectful and bold manner in which this tired building and surrounding site have been brought back to life, through the careful repair and alteration of the house and garden, as well as the sensitive way in which the contemporary addition frames, connects and ultimately heightens the experience of each part of this revitalized dwelling.

Recessive yet bold: Outside In House 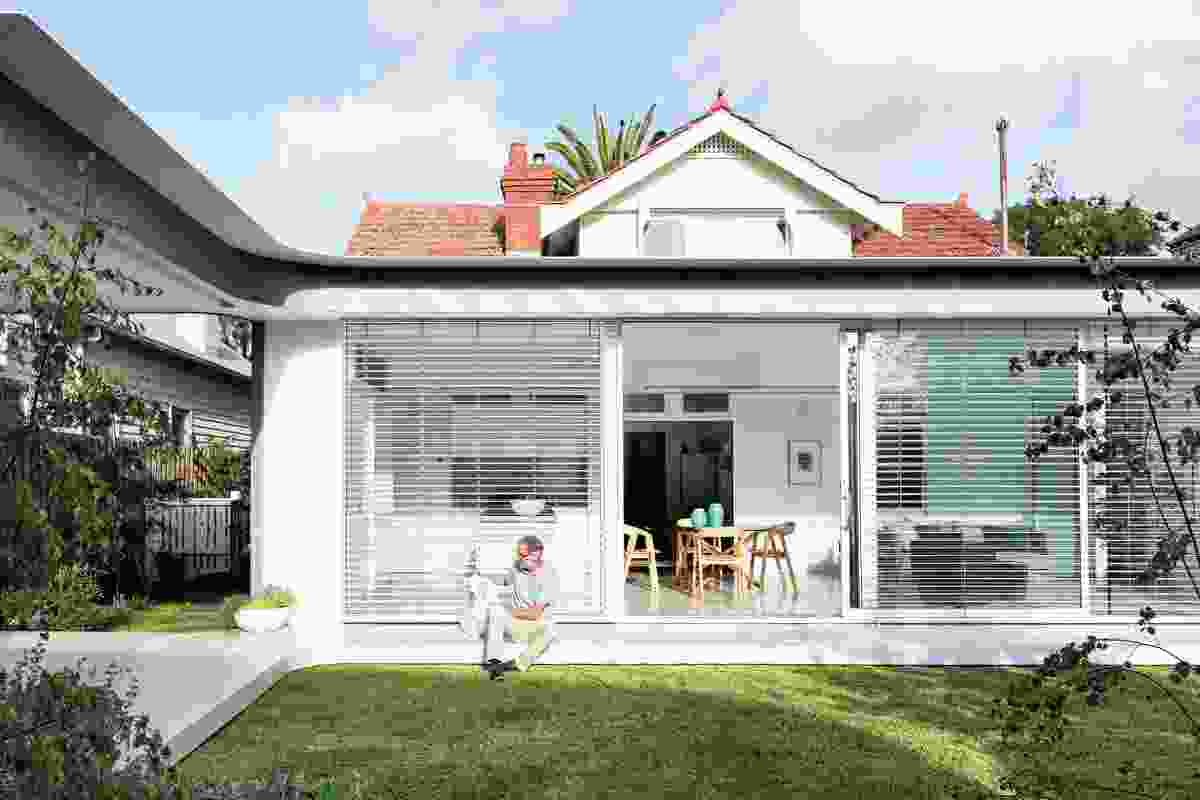 The rear extension is articulated as a distinctly new pavilion, maintaining a respectful distance from the old house. 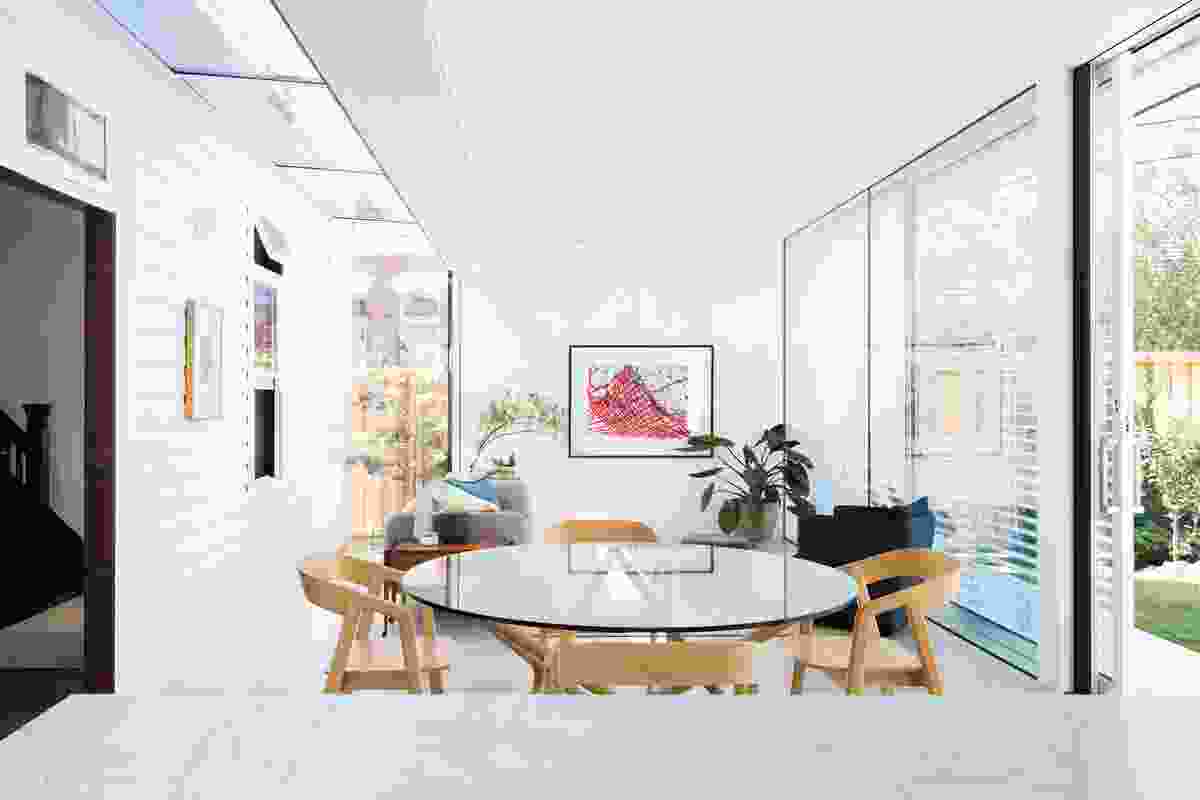 A metre-wide glazed gap frames the old house as an ornate structure and brings natural light into the rear rooms. Artwork: James Butt. 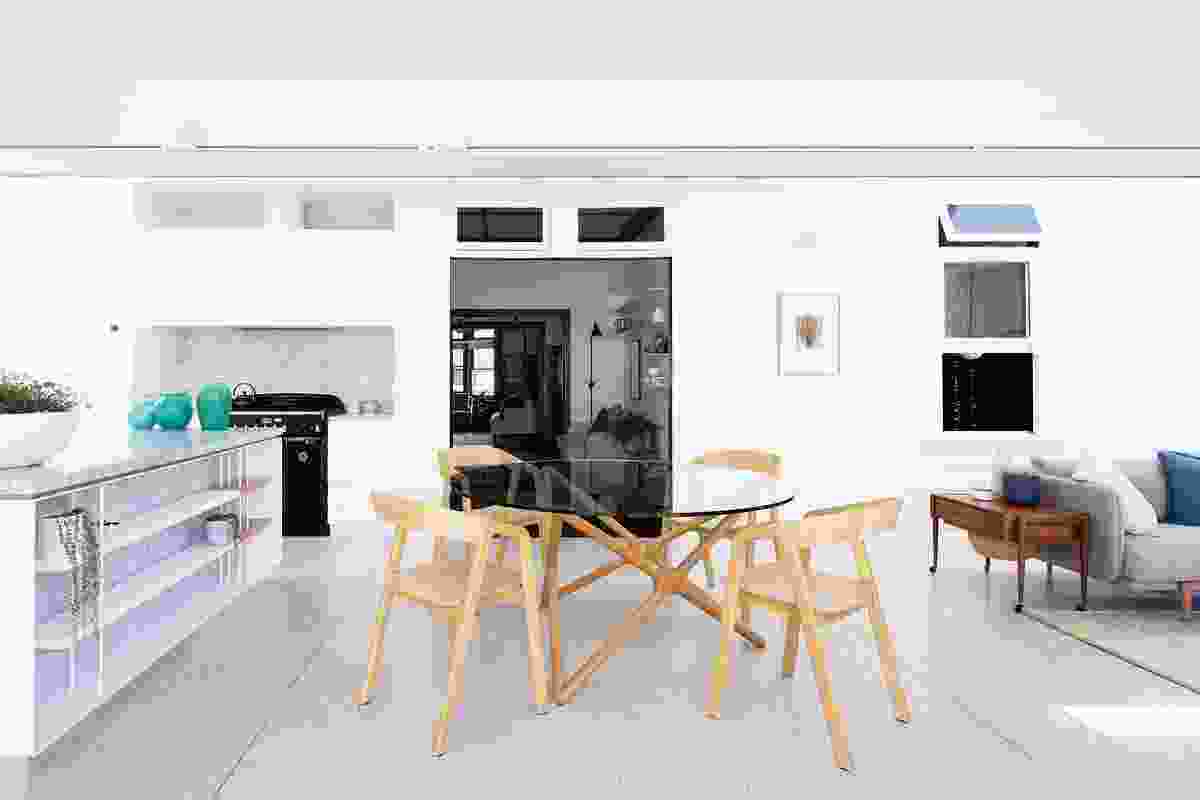 The extant weatherboards have been cleverly incorporated into the finely detailed kitchen joinery. 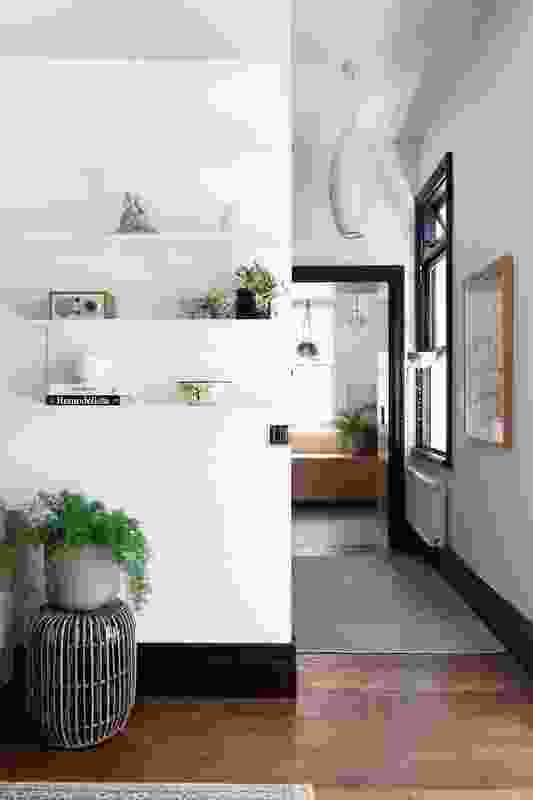 Dark-stained timber features and high ceilings have been highlighted in the meticulously restored old rooms. 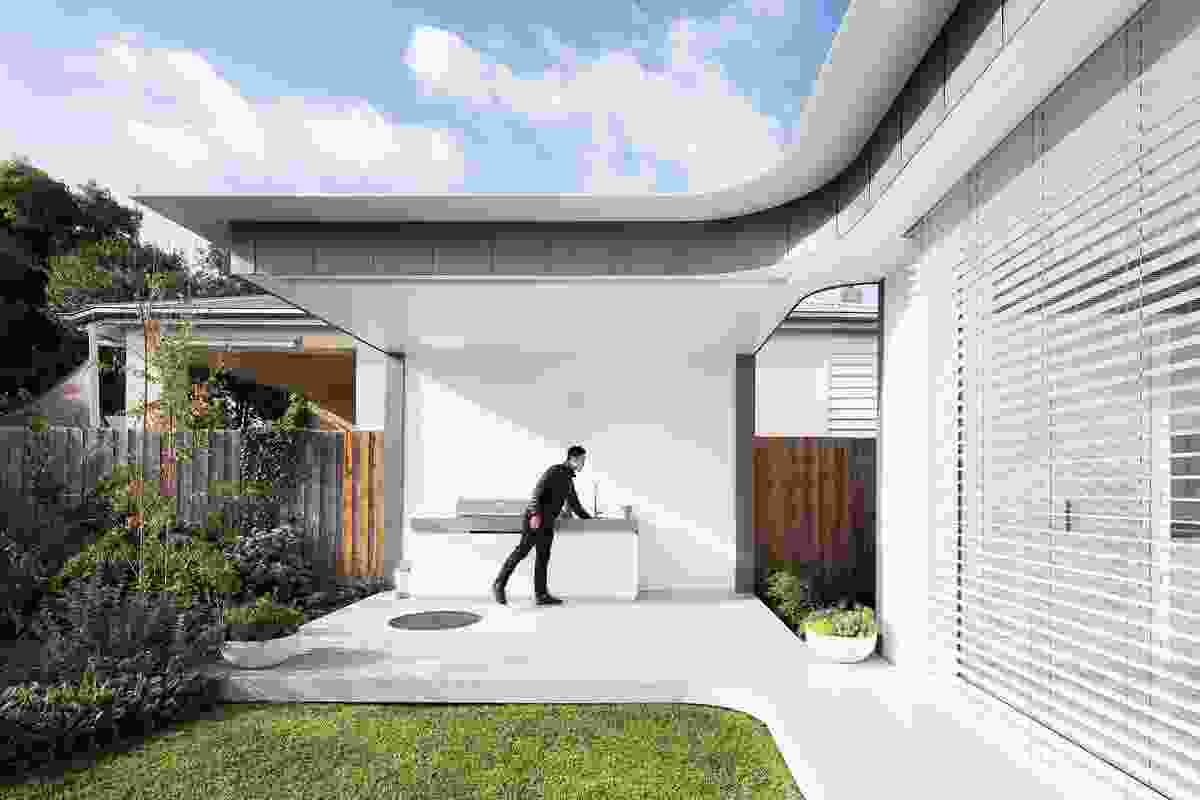 The roof and floor planes of the rear pavilion curve gently around to form a barbecue area.