A game of solid and void: Oxlade Drive House

A pragmatic response to climate and the threat of flooding by James Russell Architect produces surprisingly other-worldly results in this house in Brisbane’s New Farm.

Black melamine lines the interior of the living spaces, which have a strong connection to the outdoor courtyards.

The Brisbane suburb of New Farm is a peninsula formed by the serpentine course of the Brisbane River winding downstream past the city towards Moreton Bay. Oxlade Drive House by James Russell Architect is positioned in this inner-city enclave, not far from the low-lying edges of the tidal river.

When the neighbourhood was inundated by floodwaters in January 2011, Oxlade Drive House was under construction and the tide threatened the raised courtyards of the ground floor. Good planning ensured these areas stayed dry but in a state of flood, the conceptual vision of an Asian long house – an elongated, timber structure elevated on stilts and resilient to flooding – was easily imagined.

The timber-clad, gable-roofed building is a response to an immediate neighbour of equal scale, materiality and profile. The architect was conscious of the dialogue between this new house and its historic counterpart and it was this consideration that directed ideas about the dwelling’s form and facade. Efficiency also played its part – the repetitious shed-like frame that extends the length of the site is consistent with an ideology of economy.

The uniformity of the extruded gable-roofed box is amplified by its wrapping in black shadecloth. This textile skin disguises interruptions made along the length of the building, where two courtyards are positioned between three habitable zones. This game of solid and void is divulged only by the roof, which materializes to make shelter over rooms and disappears to ensure courtyards are open to the sky. The sheer layer of dark cloth remains continuous, regardless of the openings made behind it.

Entry and circulation occur along the south-western length of the house, where an outdoor laneway gives address to doorways into rooms and stairs inside. This thoroughfare maintains a direct line of vision from the front door to the pool at the back of the site, while distributing movement in parallel with a narrow service zone. In the central habitable zone, comprising the main living and dining spaces, the efficiency of this system ensures that the short ends, adjacent the courtyards, remain unobstructed. Sliding glass doors are employed to maximize the opening of these rooms out to the double-height spaces of the paved garden courts.

Upstairs, three children’s bedrooms are arranged side by side and are accessed from the corridor via individual robes. Separate toilet, basin and shower rooms are discreetly distributed along the service zone between the rooms and corridor. This allows for the flexible arrangement of the three bedrooms, which can be connected or made private via sliding walls, depending on the preferences of the three young children as they grow older.

The positioning of the main bedroom and ensuite, on the other side of the smaller courtyard closest to the street, balances separation from, and connection to, other zones of the house. The double-height courtyard in between ensures that direct and diagonal views between children’s bedrooms and living spaces are possible – from upstairs to downstairs, over and through garden spaces. The obvious benefit of this arrangement is cross-ventilation, but a more important benefit is the sense that individual zones remain part of a cohesive “village.”

The cloth-bound courtyards of this home are both the lungs and the heart of the building. Stepping into them is a fully immersive experience. Sunlight is tempered through the tight weave of the textile, softened enough to provide warmth but not heat. Humidity seems slightly elevated, more like a microclimate supported by creeping vines and surrounding growth. When it rains, the shadecloth filters the water droplets, dissolving showers into mist to make a garden immersed in fog. The magnificent canopy of a neighbouring camphor laurel tree adds another layer of filtered sunshine and an amplified cooling effect to make a garden sanctuary of the outdoor room.

It is difficult to imagine that a family would agree to live in a house wrapped in shadecloth, yet the story of how this evolved suggests a very rational response to a fairly conventional brief. The clients and their three children had moved to Brisbane from Sydney. They wanted protection from insects and hotter weather, better access to outdoor space and a house that could be permanently open to breezes. The domestic application of an industrial product fashioned in this way proves to be a genuine response to a set of genuine concerns.

Of the many systems at play in this house, it is the atmosphere captured by the pair of shadecloth-covered courtyards that is most memorable. The practical benefits of privacy and shade are important fundamentals, but more than this is the liberty granted to a family with young children to move more freely in the grounds of their home. The conversation about the interface of enclosure and environment is recurring in the work of James Russell Architect. At Oxlade Drive House, the augmentation of the natural world through a fine textile filter makes this exchange seem otherworldly.

A game of solid and void: Oxlade Drive House 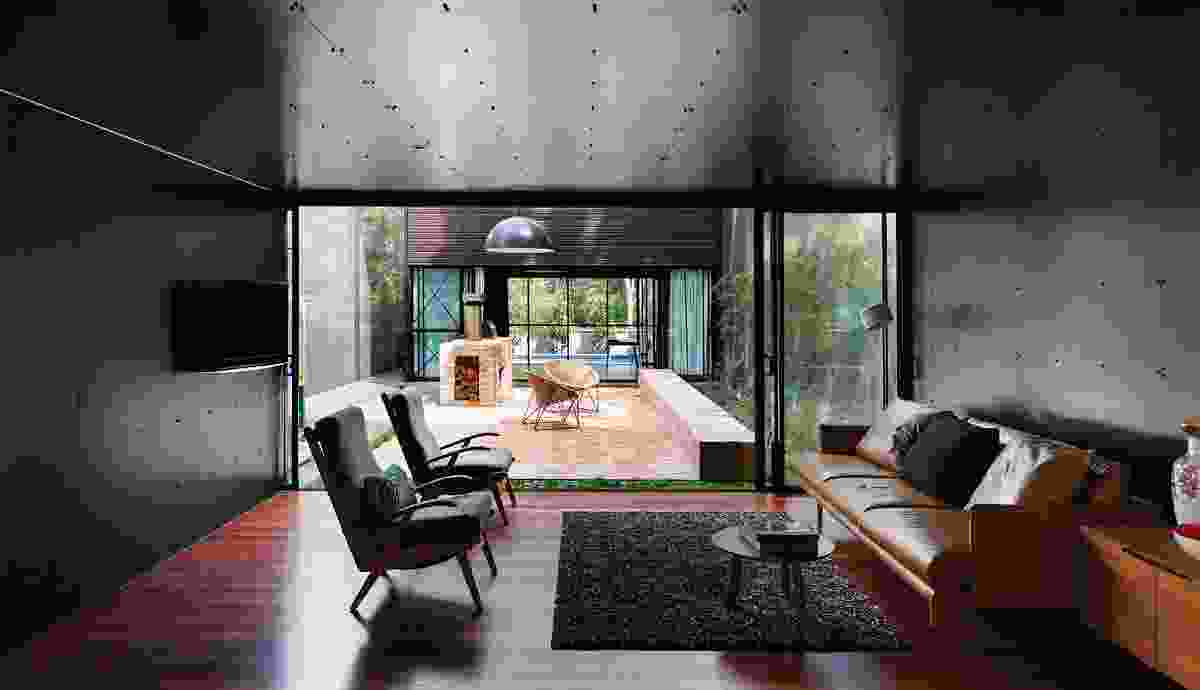 Black melamine lines the interior of the living spaces, which have a strong connection to the outdoor courtyards. 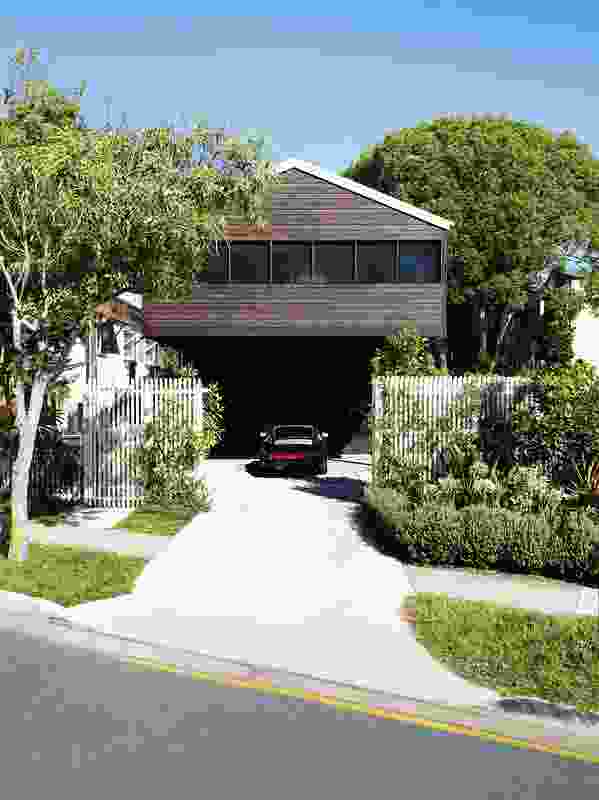 The timber cladding and gable roof of the house reflect the form and materials of an immediate neighbour. 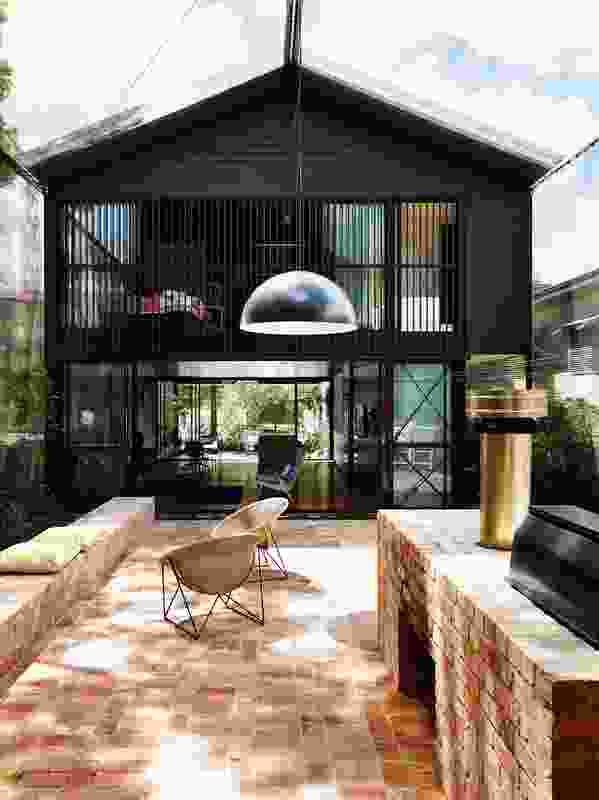 A sheer layer of shadecloth wraps the courtyards and unifies the three buildings that form the project. 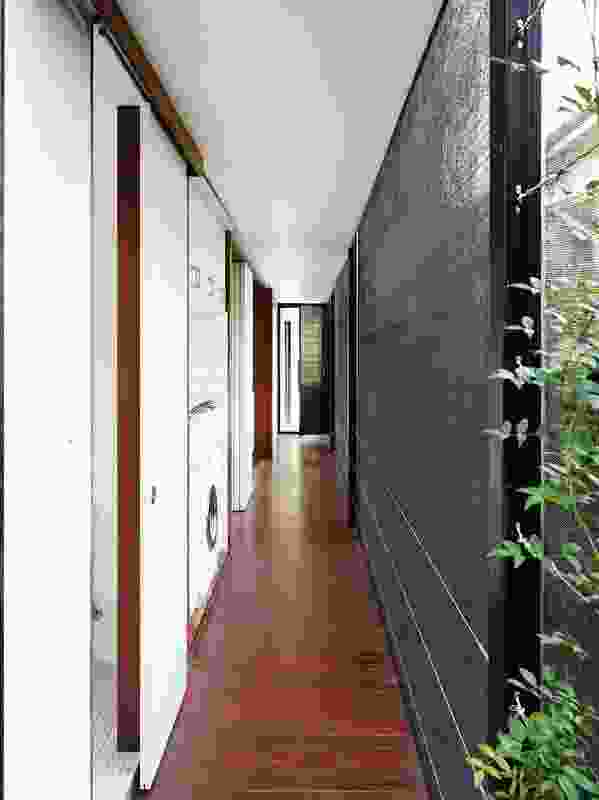 A corridor separated from the elements only by shadecloth serves as the house’s primary circulation. 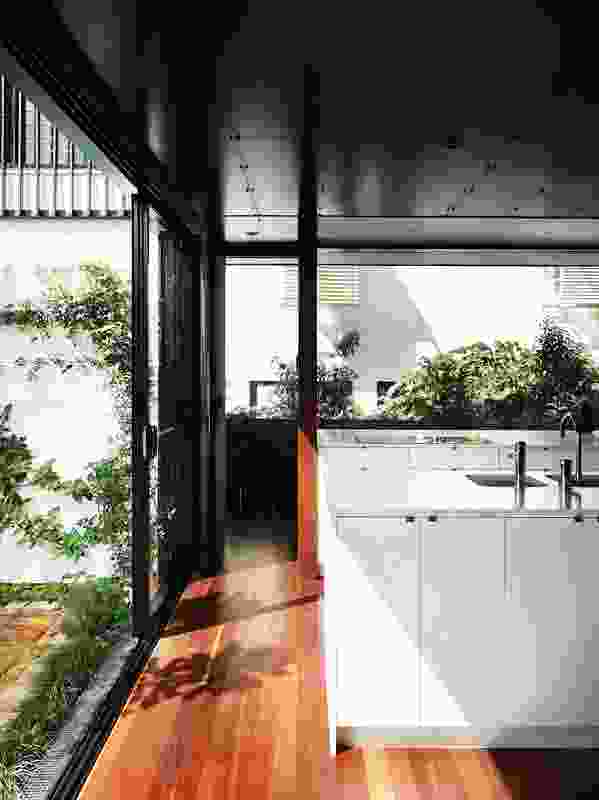 Sliding glass doors maximize openings out to the courtyards. 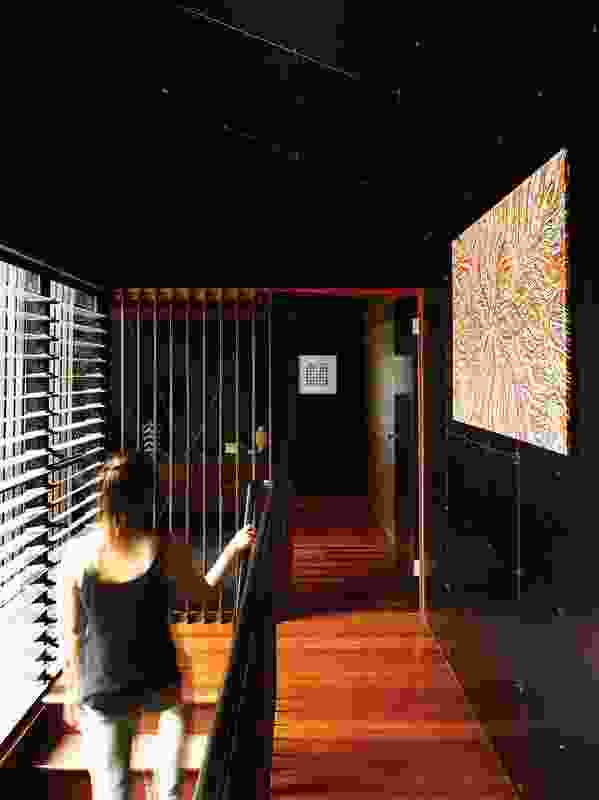 An economically simple, shed-like frame has been used throughout the project. 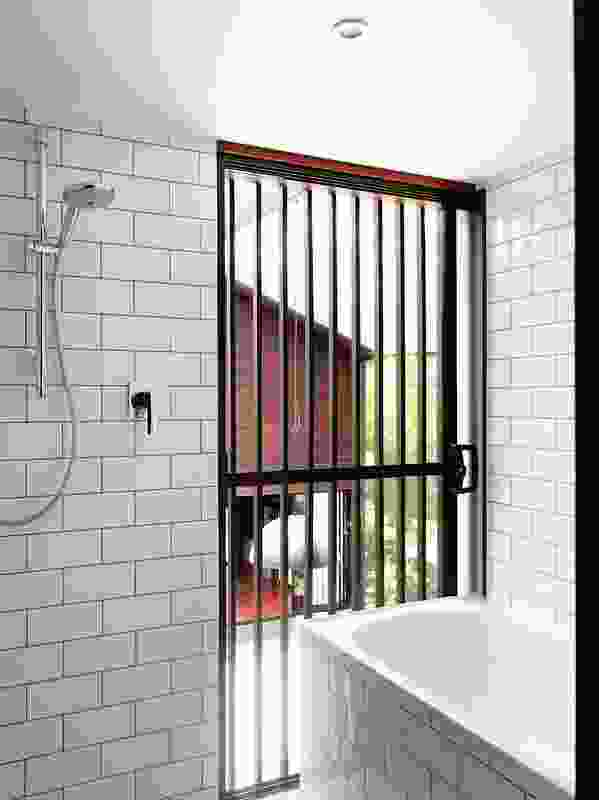 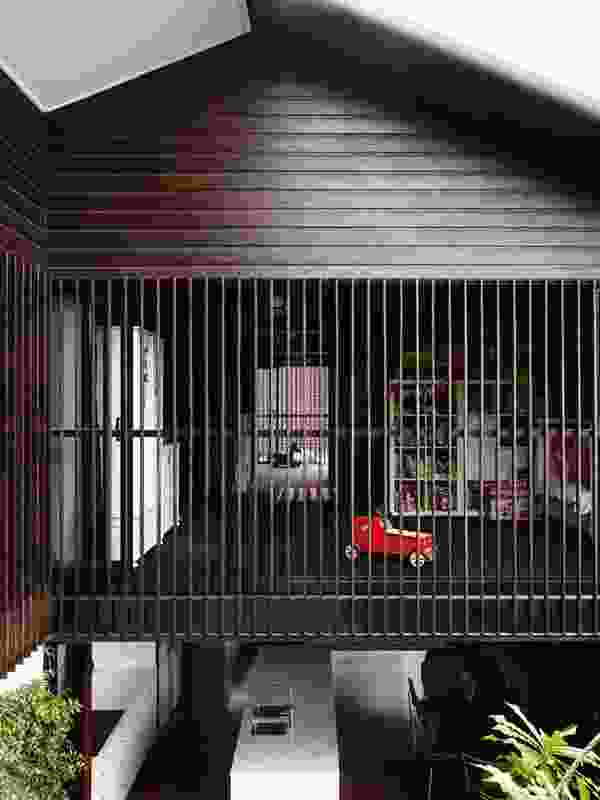 Direct and diagonal views between children’s bedrooms and living spaces are possible – from upstairs to downstairs, over and through garden spaces. 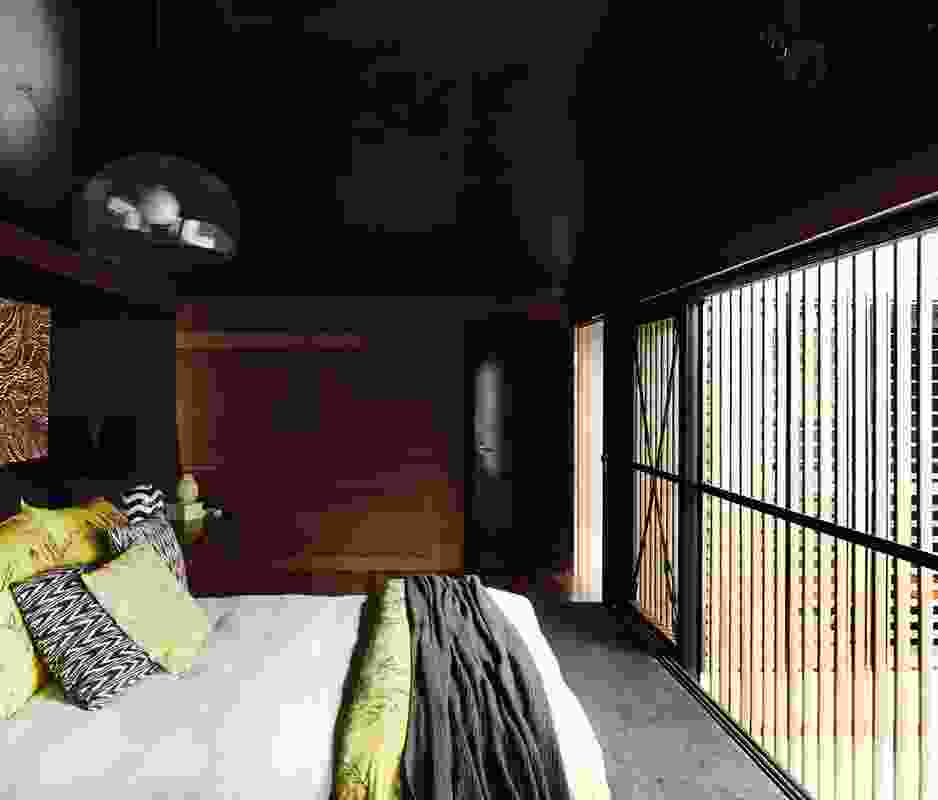 The positioning of the main bedroom and ensuite, on one side of the smaller courtyard closest to the street, balances separation from, and connection to, other zones of the house. 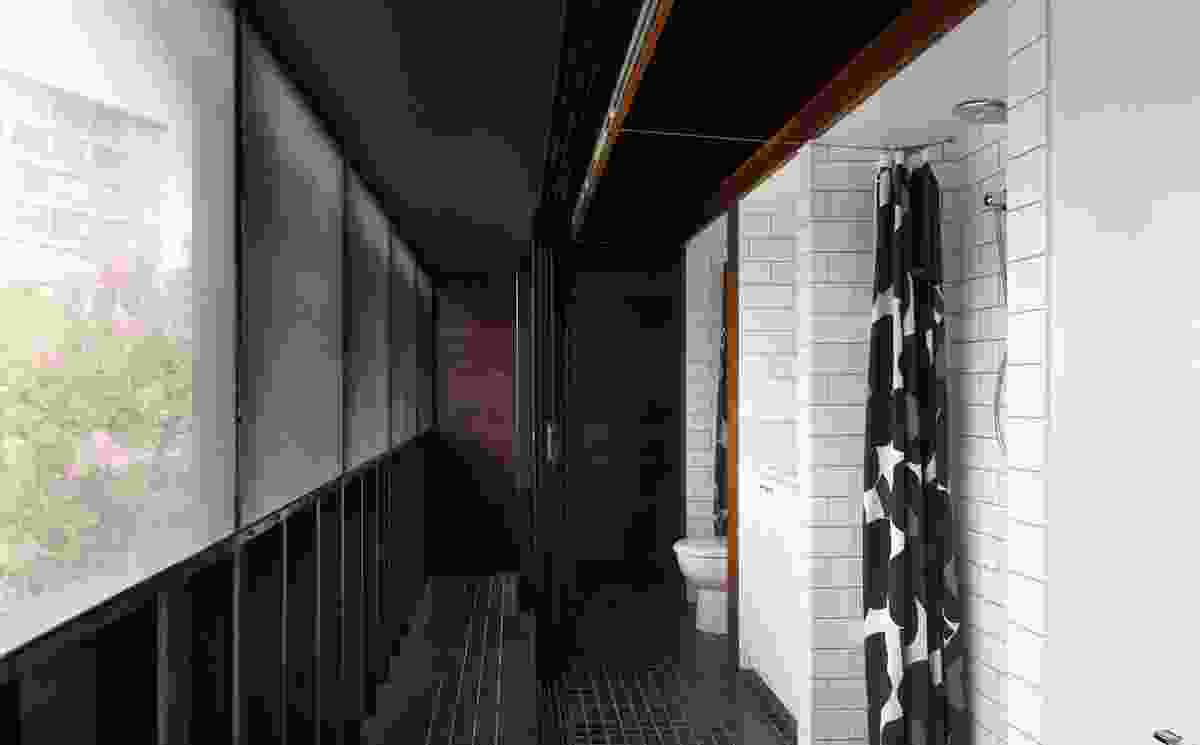 The ensuite to the main bedroom faces directly onto the street side. 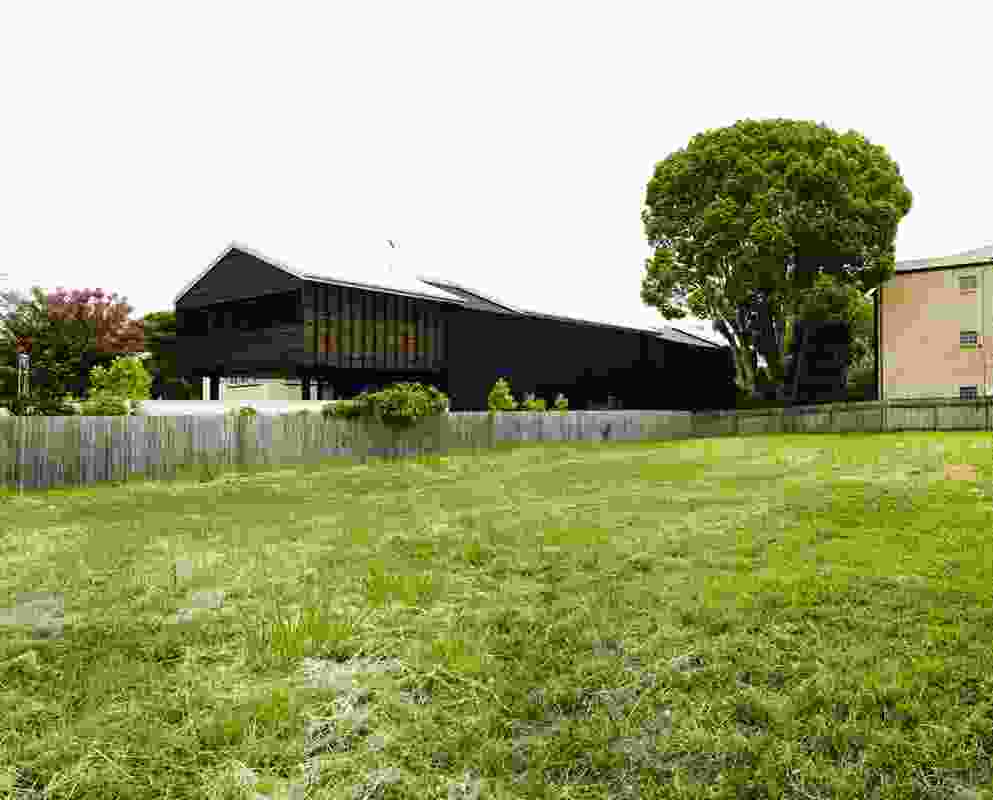 The uniformity of the extruded gable-roofed box is amplified by its wrapping in black shadecloth.