This addition to a four-room cottage by Kieron Gait Architects challenges room-making conventions and encourages its owners to share in the “magic” of treehouses and cubbies.

The sunken living room ends in a brick-floored courtyard beside the back garden.

The inner-suburban enclave of Paddington, Brisbane, maintains a sublime balance of order and chaos. Order comes in the form of nineteenth-century, residential subdivisions that materialize as an assortment of fences demarcating plots roughly ten metres wide and forty metres long. Chaos ensues where the uniformity of this grid collides with the natural order of ridges and gullies and the unruly tangle of a subtropical landscape. Charm results from historic cottages, balanced on timber stumps and sprouting pyramid roofs that follow the rise and fall of the terrain in a lyrical cadence that plays out across the neighbourhood.

Such delightful conditions set the scene for the transformation of this traditional four-room worker’s cottage sited on a characteristic, elevated plot in Paddington. When the team at Kieron Gait Architects first took pen to paper they were drawn to the symmetry of the cottage plan and the central corridor dividing its four humble rooms. Concept sketches explored opportunities to extend this central axis into the backyard. A neat diagram resulted, which described a suite of living spaces and courtyards plotted along an extended central spine with a parallel staircase inserted to access city views from an upper-level sleeping chamber.

The success of the diagram lies in the way many new spaces conform to the dimensions of the old cottage, particularly on the western side of the corridor. Along this edge the bathroom, pantry, kitchen and dining room are systematically organized in three-metre-deep portions with the effect being that contemporary spaces have a modesty of scale that is in keeping with the traditional rooms at the front of the house. As the backyard approaches, the rigour of containment gradually dissolves until eventually sliding glass doors give way to a floor-to-ceiling, cantilevered corner opening. As the oblique view opens out to the lawn the ceiling lifts against the western wall and a high-level corner window draws the eye skyward.

The eastern edge is arranged more informally than the western, with a staircase and sunken living room terminating in a brick-floored courtyard beside the back garden. The peninsula formed by the lounge room extending to the side boundary enables views south to the old cottage and north to the backyard. Solid vertical shutter windows act like gills to draw light and north-easterly breeze inside. The angle of each shutter controls the size of the window aperture, and subsequently views to a frangipani tree and the glorious dappled shadows cast across walls and floors inside.

The transition from the old cottage to the contemporary extension is marked by the widening of the hallway to incorporate the new staircase and landing. Polycarbonate wall cladding delivers a soft, warm light, filtered through the vertical timbers of both the exterior facade and the staircase balustrade. The luminance is serene and not dissimilar to candlelight at particular times of the d ay. The blackbutt timber walls, floors and staircase absorb and reflect the golden hues of this space beautifully and bring a resonance to the shadowy surfaces of ceilings and expressed timber framing, which are both painted black.

While concrete floors and brick garden walls ground the lower floors of the addition, the upper floor is expressed with the light ness of timber. A black vertical timber “veil” establishes the uniform containment of a simplified rectilinear form. The timber screen is eroded in just a few places, coinciding with window openings on the eastern facade and window to the sky carved from the north-west corner above the dining room. The most alluring spaces occur where timber screen continues beyond the point at which polycarbonate rain screen and interior linings terminate. The “birdcage” and outdoor shower are two such spaces – glorious, sheltered outdoor rooms contained within the veiled enclosure but open to the elements.

Designed to satisfy a brief for a daybed, the “birdcage” extends from the bedroom to create a garden room that supports the daily ritual of quiet reflection. In this space the vertical rhythm of the timber battened screen intensifies the sense of prospect and refuge, breaking only to frame a view of rolling hills and the distant city skyline. On the equal and opposite corner of the upper floor an outdoor shower accommodates the ceremony of bathing beneath subtropical skies. The smallest room in the house is made extraordinary by virtue of its minimal enclosure.

Drawing inspiration from both cottage and site with an architectural response tailored to the particular dynamics of the dwellers, Kieron Gait has proven his skill in the delicate business of merging historic cottage with contemporary architecture. What sets this work apart is the balanced sense of order and chaos that has allowed a building, planned with rigour and delivered with extraordinary execution, to possess a sense of playfulness and fun. In challenging room-making conventions this home encourages a young couple and their baby to return to the innocence of childhood and revel in spaces that share in the magic of treehouses and cubbies. 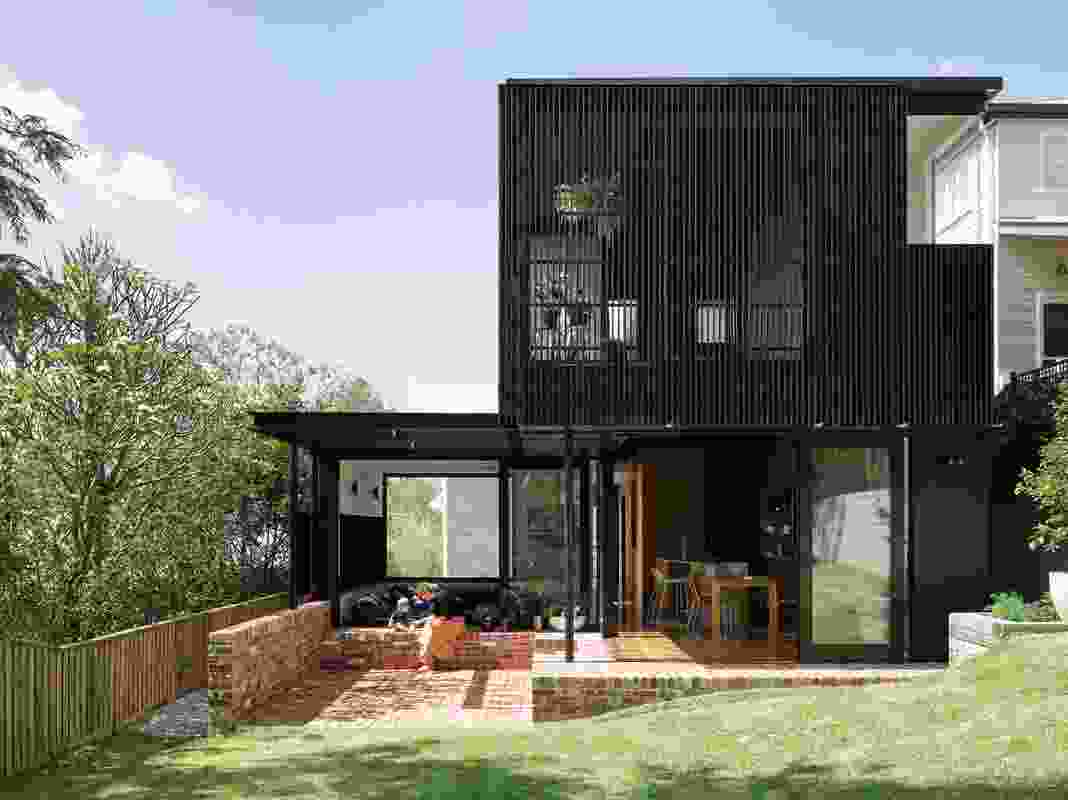 The sunken living room ends in a brick-floored courtyard beside the back garden. 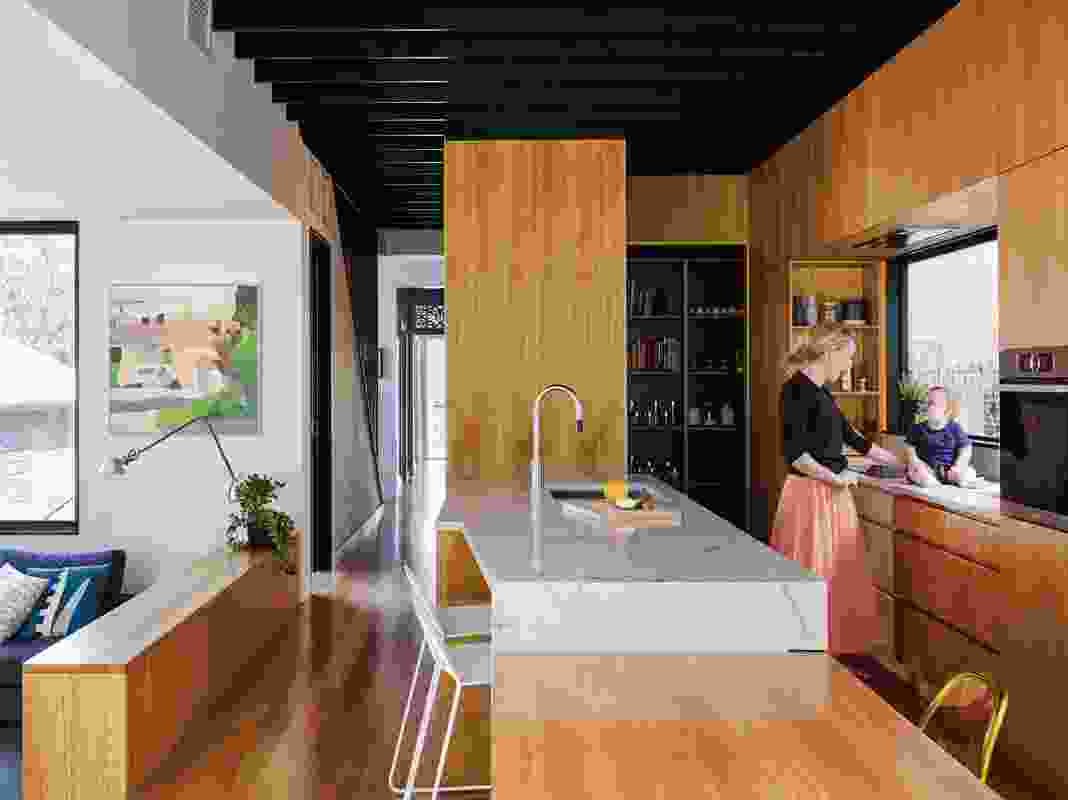 The abstract shape of the island bench cuts a place for perching and references angles seen elsewhere in the home. Artwork: Michael Muir. 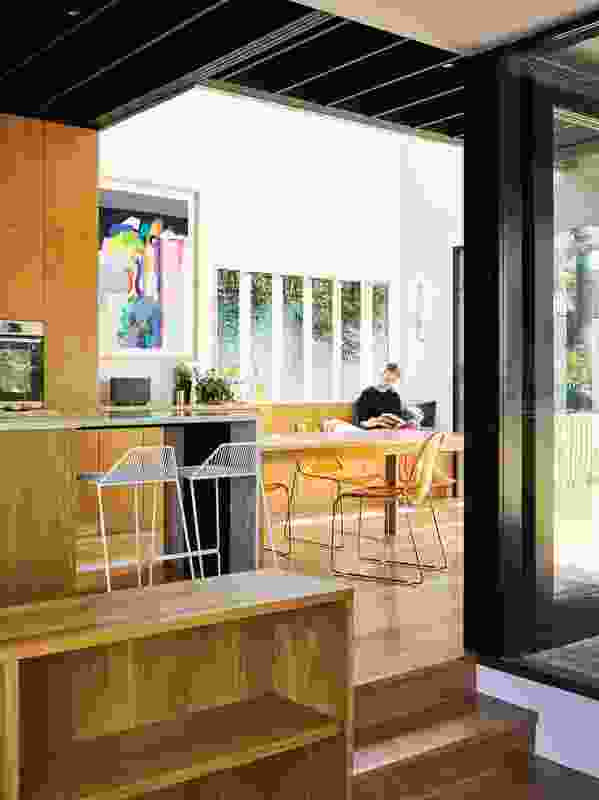 A banquette seat is built into the back wall of the dining room as a continuation of the kitchen joinery. Artwork: Ali McNabney-Stevens. 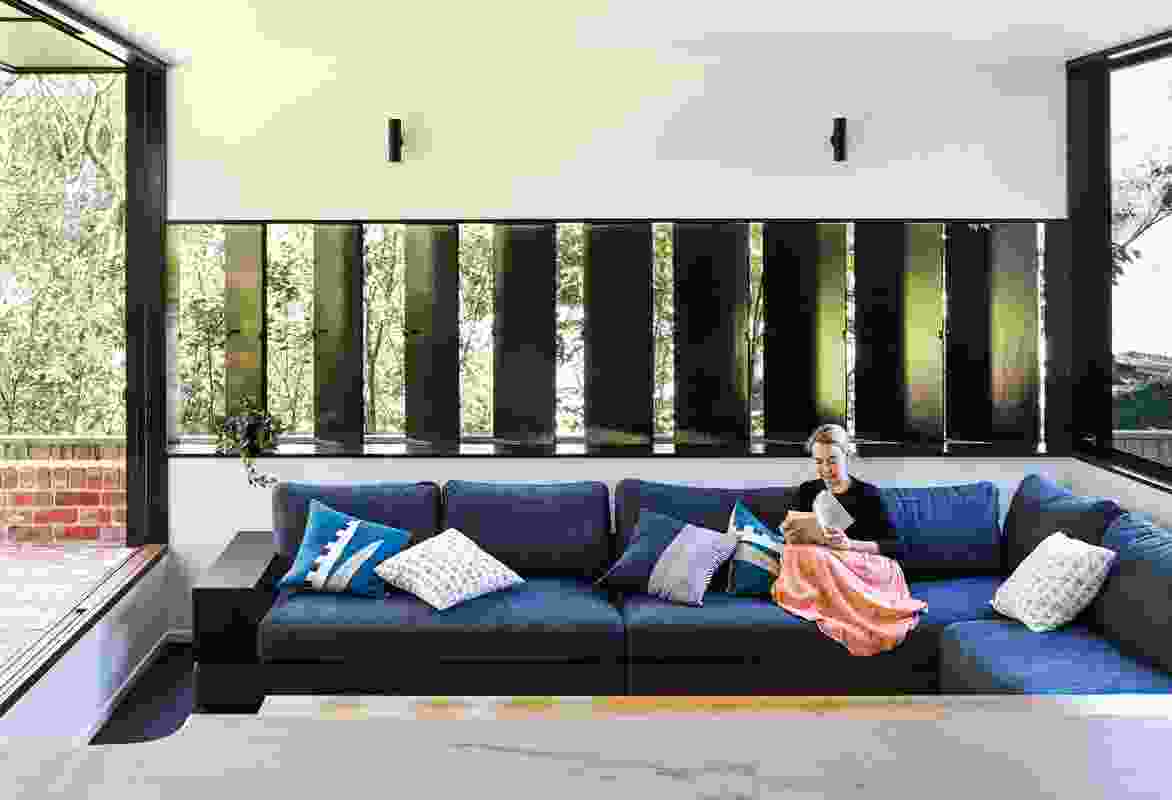 Solid vertical shutter windows act like gills to draw light and the north-easterly breeze inside. 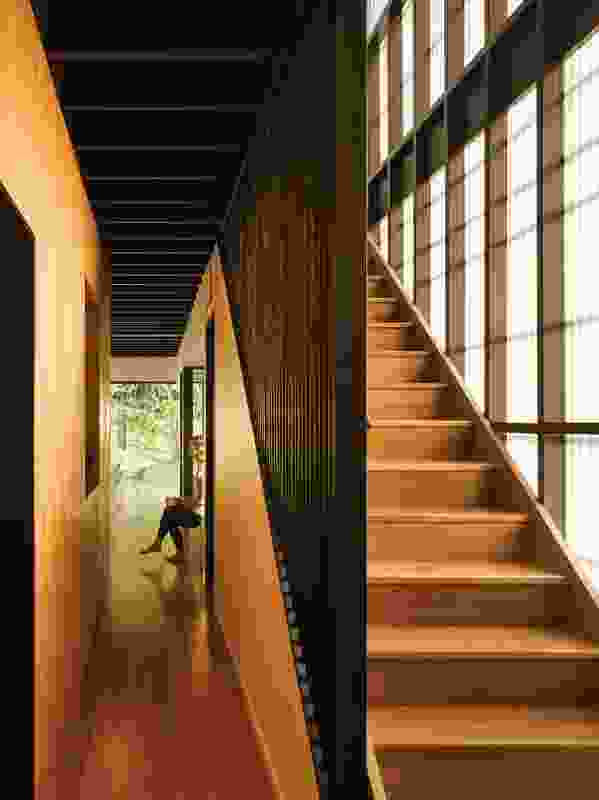 The stair leads to an upper-level bedroom that offers views to the city. 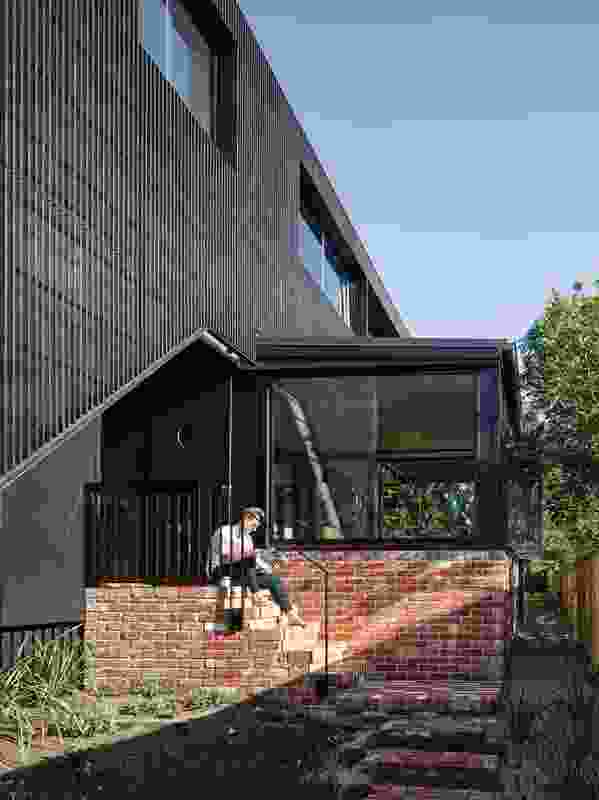 The cantilevered living area, which offers access to the garden from both ends, is wrapped in red brick. 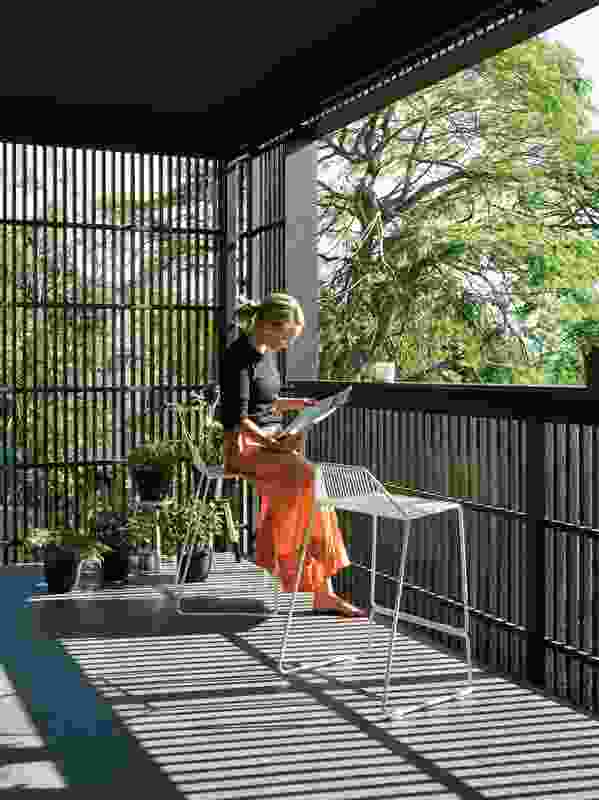 The “birdcage” extends from the bedroom to create a garden room that supports the daily ritual of quiet reflection. 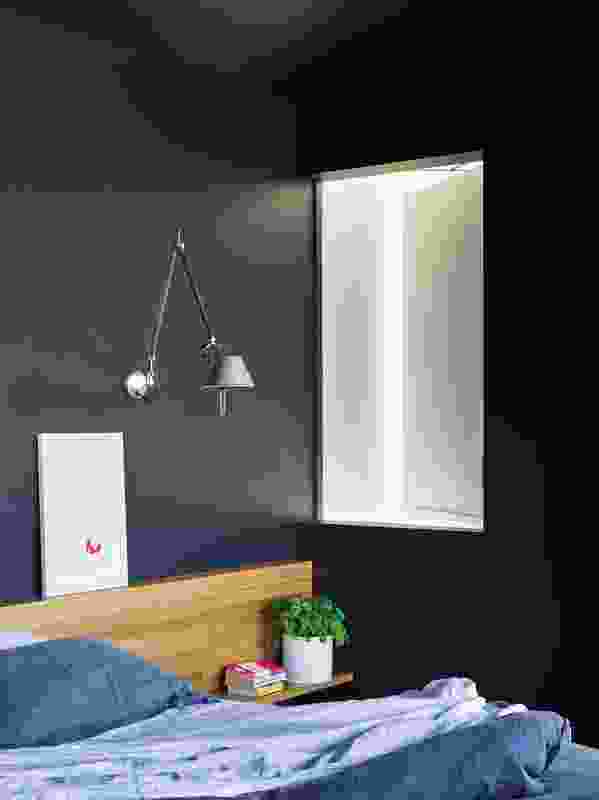 What sets the house apart is the balanced sense of order and chaos that allows it to possess a sense of fun. 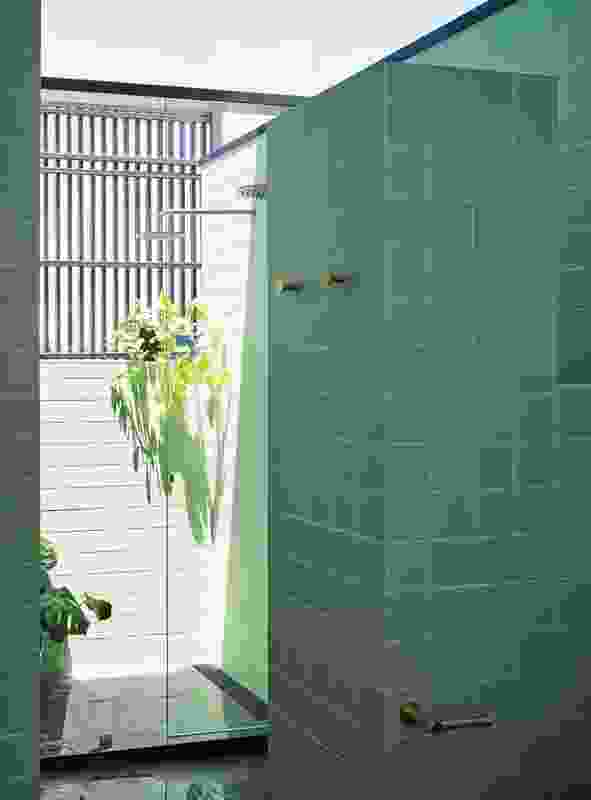 The shower is a glorious, sheltered room contained within a veiled enclosure but open to the elements.

The contemporary spaces were designed with a modesty of scale that is in keeping with the original rooms. 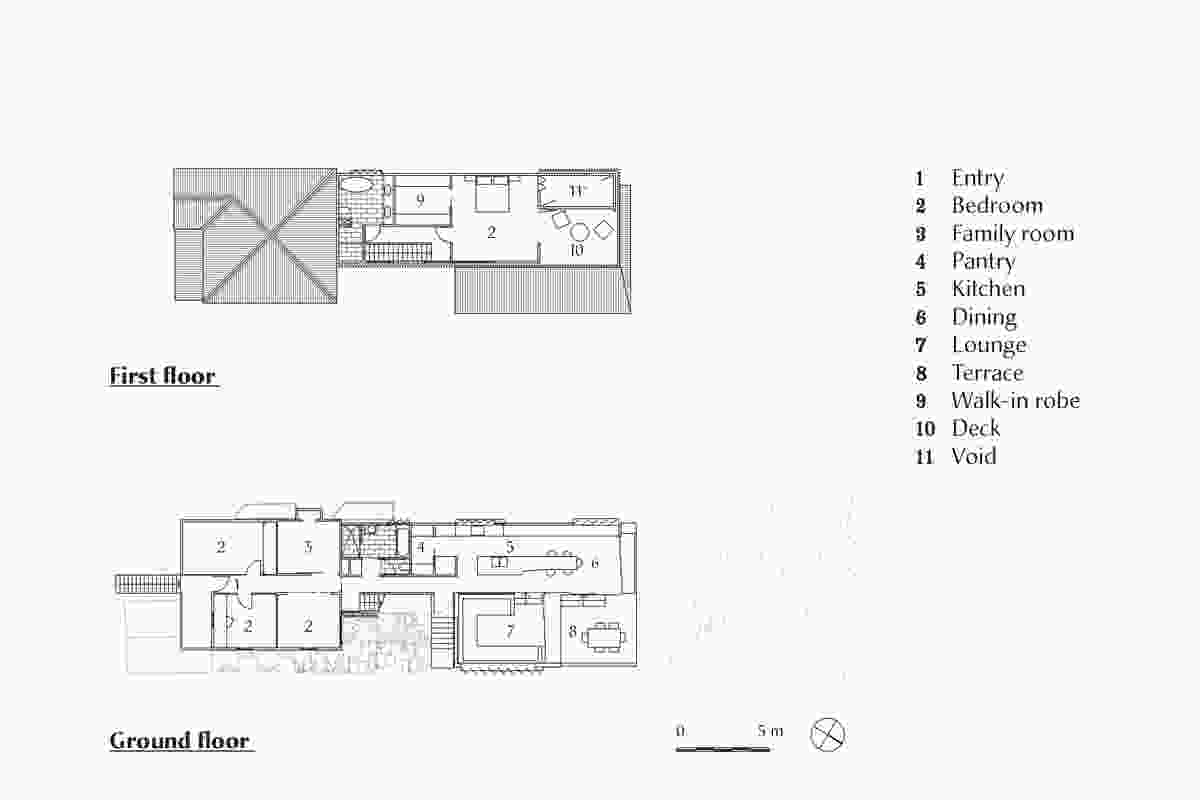