Trifolium by AR-MA, the second pavilion in the Sherman Contemporary Art Foundation's Fugitive Structures series, invites viewers to participate in the problems that it poses.

How do we move away from talking about what a building looks like to discussing what it does? In a globalized economy, the immovability of architecture has meant that images have taken over as the primary means of communication. Nowhere is this more apparent than in the world of digitally produced architectural forms. There is an assumption with these types of buildingsthat they will always look better as animage – too often we’ve been disappointed when the real fails to live up to the rendering. In this context, Trifolium’s main success is that we can talk about it as an experience rather than just a process, model or form, and definitely as more than an image.

What a building “does” is not simply a result of what people in architecture “do.” Buildings also impact bodies and shape human experience in multiple ways. The program of the architectural folly exacerbates this idea, because what it “does” is based purely around its material effects.

A conversation with AR-MA founding director Robert Beson reveals the prerogatives of the project. Despite his reputation for digital dexterity, Beson has been researching the field of atmospheres for several years now and speaks passionately about what drives his projects: a frustration with flatness – the flatness of roofs and the flatness of experience. His approach to making is not about simply employing digital technologies, it’s about an entirely different kind of thinking. Beson describes the design process through a series of questions:

“What can you do to coalesce form? How do you create a system or meta environment that has properties and difference embedded into it, like a weather map? How do you create a differentiating system that, like weather, coalesces architectural properties? Is there another way of thinking about this problem besides extruding lines up from a page?”

At a time when architects are losing more and more control to consultants and manufacturers, this technology becomesa way of reconnecting designers with the means and methods of making.

Beson’s description conveys that his thinking is shaped by his parametric design tools. Rather than seeing a design project as a linear sequence of ideas and actions from concept through design development to completion, the individual components of a project are understood in terms of their relationships to each other. Beson describes it thus: “Everything is connected, you can’t pull any individual thing out and look at it in isolation.” For Trifolium this was played out in the extreme, with AR-MA responsible for the design, fabrication, logistics and installation of over three thousand unique components. The automation of design to fabrication pipelines and the use of robotic technologies allowed for the integration of manufacturing, management and delivery of these components into a final structure. At a time when architects are losing more and more control to consultants and manufacturers, this technology becomes a way of reconnecting designers with the means and methods of making. While extravagantly futuristic in appearance, Trifolium has become a prototype of what is possible for architectural practice. “The project was about refining the relationship between the formation of the material and the formation of the architecture so that the two things are co-dependent,” Beson explains. “They’re not isolated – everything is thought of in unison. How a material gets to the factory, how it’s worked on, how you protect it and send it to site, how you retrieve it and get it together … it’s a different way of thinking – the whole thing becomes a system.”

Architects often describe their job as problem solving. But for Beson, within the complexity of this systems-based approach, the question is one of problematizing, a process in which each project tries to find or reframe a problem. The viewer might interpret Trifolium as a problem machine, an amassing of multiple problems that don’t disappear once the project is completed but rather continue to pose questions. When I ask Beson what problems were identified in Trifolium, he sighs and says “so many …” before launching into an extensive list.

“What are the spatial qualities of inhabiting a continuous space? How do you resolve the often-opposing tension of difference and continuity in the same space? What would happen if we thought about architecture in the same way we thought about making a car – with very little tolerance? What if you made a building like you make a plane? What would happen if you made every single one different and unique? What kinds of problems would that throw up? How do you deal with the joints? How do you start to think through tectonics when the building becomes so radically different from what we’re used to seeing?”

The pavilion becomes an invitation to participate in the problems that it poses. Instead of being treated as passive consumers, visitors are provoked to reflect on and consider what’s around them.

The “problem making” that is inherent in AR-MA’s process is also experienced in the project itself, which activates a certain kind of engagement. The pavilion becomes an invitation to participate in the problems that it poses. Instead of being treated as passive consumers, visitors are provoked to reflect on and consider what’s around them. This is not a question already solved and presented by the architect. As Beson says, it requires thinking and it forces you to ask questions about it and about your relationship to it. What we end up with is space that is a topography of experience, that is not singular, that is not didactic and that, as a result, becomes a much more fascinating experience.

Despite the novelty of Trifolium’s form, there are some surprisingly familiar issues being addressed: blurring the inside and the outside, framing the landscape and even “touching the earth lightly.” These have become tropes specific to an Australian, and particularly a Sydney, architectural identity. AR-MA’s project proposes that instead of assuming that such an identity is based on style or form, perhaps we should consider if it hinges on spatial and thus experiential concerns. Trifolium presents a new way for architecture to explore issues that may well be specific to our particular cultural, environmental and social ways of life. In the process, it also presents a future way of inhabitation, one that is dynamic, responsive and absolutely exhilarating.

AR-MA’s Trifolium is on display at the Sherman Contemporary Art Foundation until 13 December 2014. 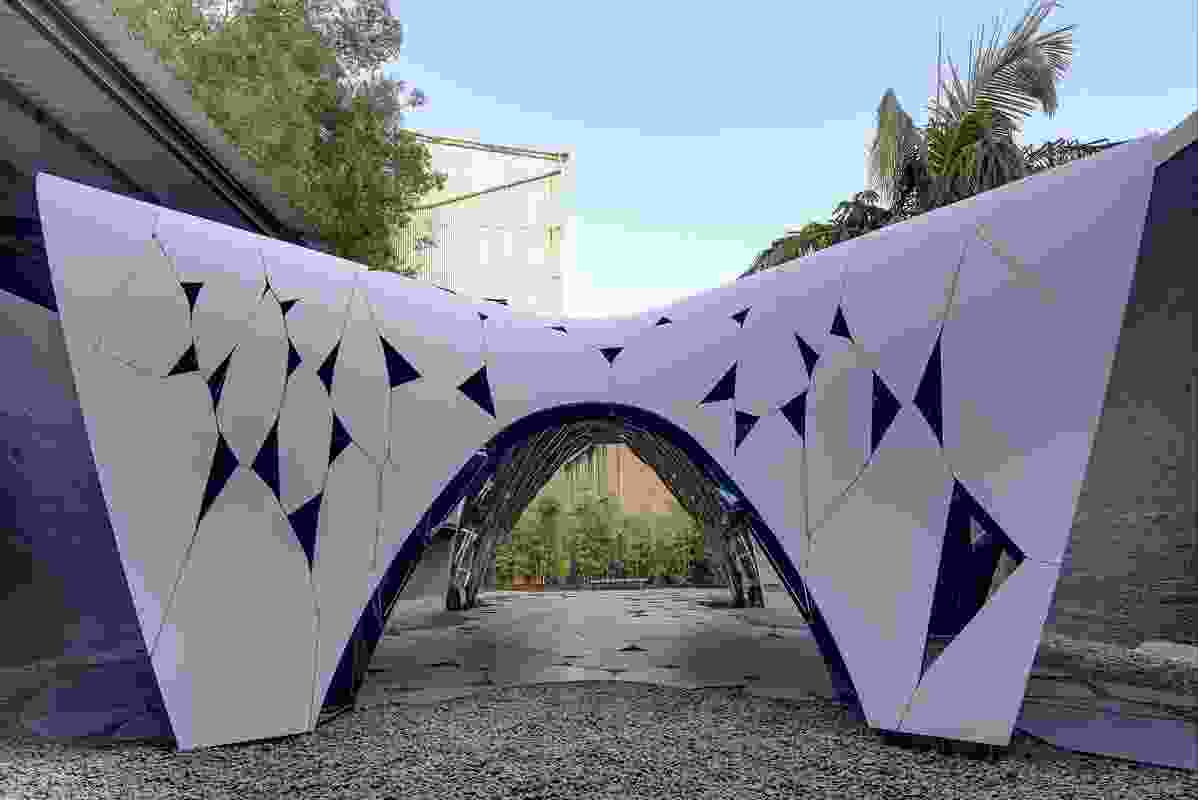 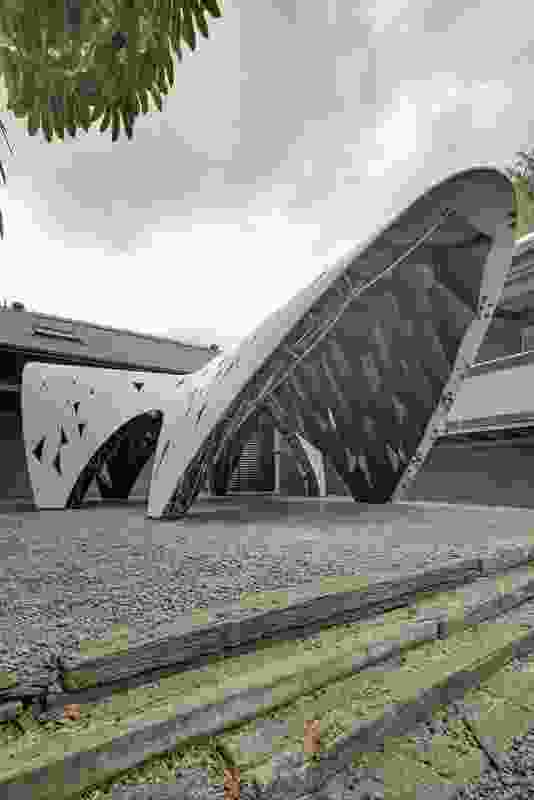 Trifolium is made from more than three thousand unique components. 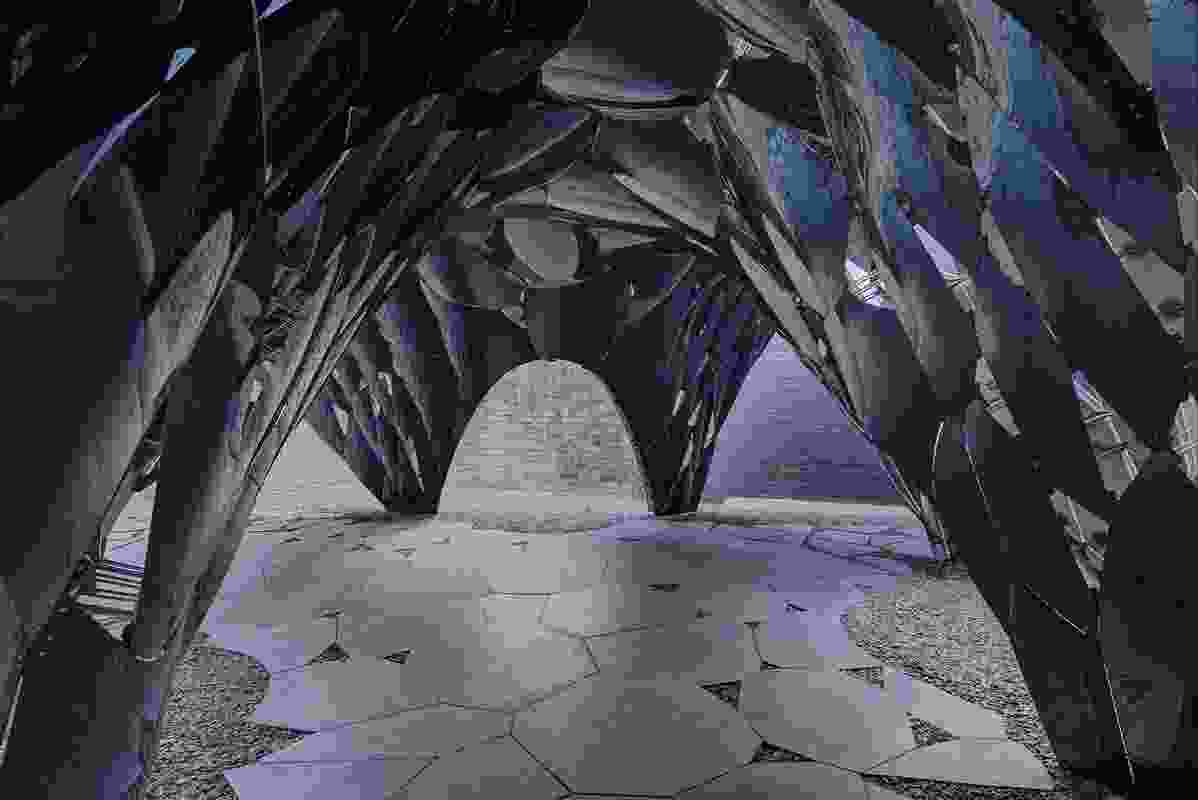 Curved panels of mirror-polished black stainless steel line the inside of the pavilion. 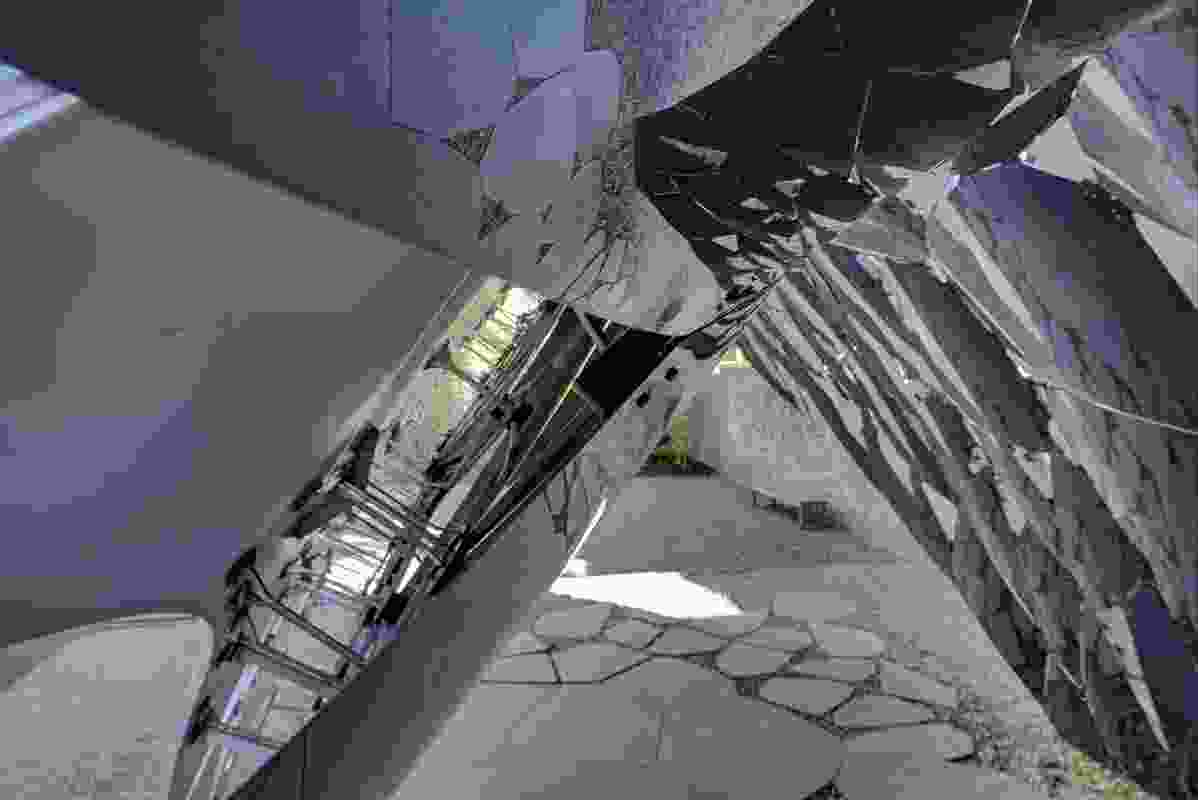 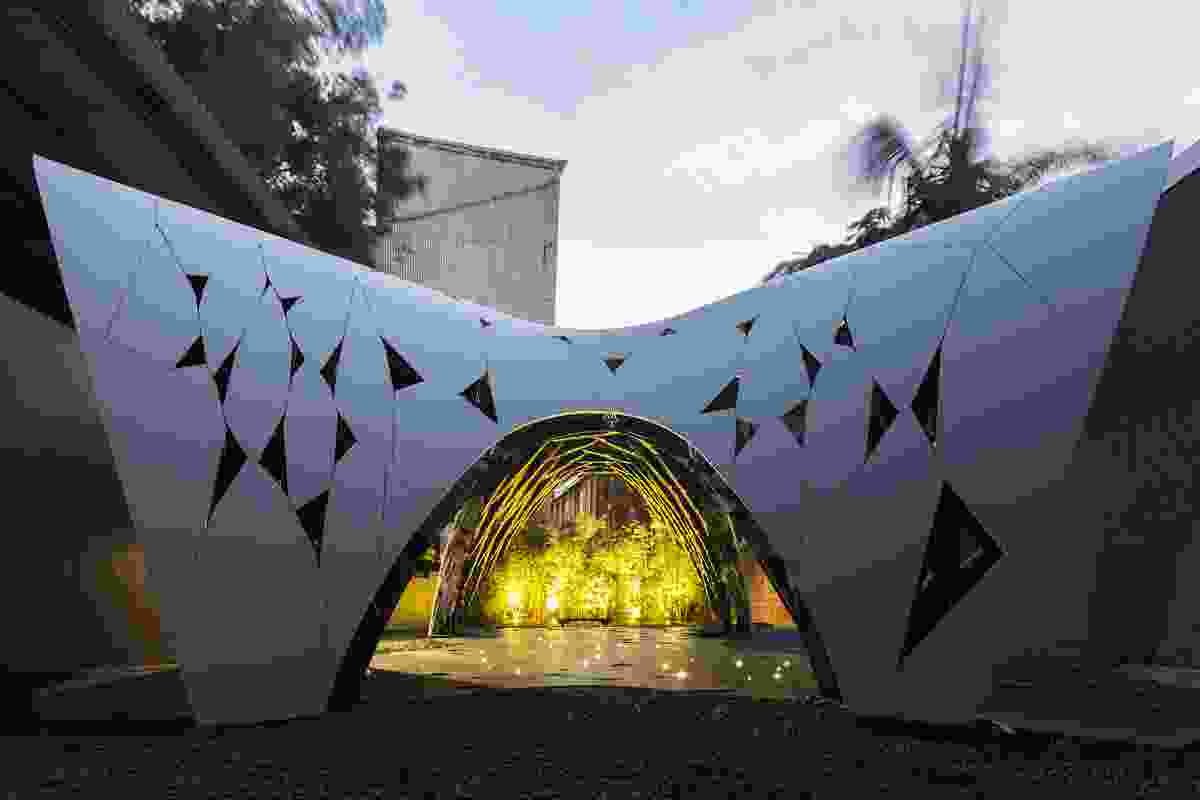 Fibre-optic lighting set into the concrete pavers illuminate the pavilion after dark.