Housed in the iconic Art Deco Paramount House in Sydney’s Surry Hills, this shared office designed by Woods Bagot is both thoughtful and handsome.

A compact bar provides a hotel-like offering to foster a collegial atmosphere. Artwork: Jim Morrison Was Here (2014) by Ben Quilty.

For people outside the design profession, it is often the finished product that most represents what designers do. Yet for those within the professions of architecture and interiors, the reality of practice is embedded in the processes and dynamics of teamwork and collaboration. The success or failure of a completed project is, more often than not, demonstrative of the efficacy of the team – the client, contractors, consultants and designer. Commonly today, the procurement and delivery of most mid- to large-scale projects does not favour an integrated collaborative approach; instead, each parcel is bundled up into its discrete billable and deliverable segments. Rejecting this mode of working, Woods Bagot and The Office Space (the client and builder) have collaborated on Paramount to produce an interior of outstanding quality, both in terms of its design integrity and aesthetic beauty.

Paramount is The Office Space’s latest venture into co-working environments, housed in the iconic Art Deco Paramount building in Sydney’s creative boomtown of Surry Hills. It is a clear maturation of the concepts first tested twelve years ago in The Office Space’s initial co-working set-up, in a warehouse on neighbouring Reservoir Street. Naomi Tosic, one part of the husband-and-wife client/builder duo, says that with Paramount they were looking at “evolving an offer to set them apart,” specifically shifting the notion of co-working spaces from brightly-coloured packing-crate-furniture-filled start-up spaces to something more sophisticated, a “boutique serviced office.” Tosic likens this evolution to the levels of service provided by hotels – the general offer of co-working facilities are like hostels and Paramount is a luxury hotel.

Alvaro laments that without this robust and involved process there is no “direct push and challenge, or prototyping” emerging from a design process, often leaving the designer’s role as merely choosing a series of finishes, fittings and furnishings from a shopping list.

With the keywords of “luxury” and “bespoke,” the Tosics approached Woods Bagot with “no preconceived ideas” of how the design was to develop. This leap of faith was aided by the fact that Boris Tosic would be building the scheme. With this rare synergy between client, constructor and designer, Woods Bagot principal Domenic Alvaro notes that it acted as a “catalyst for innovation” as all parties involved were “able to script every aspect of the project.” Working directly with the Tosics and the extended network of artisans they shared allowed for “pioneering work” to take place as part of the Paramount project, or as Alvaro prefers to see it, “real R and D – design plus making.” The engagement, exploration and dialogue between the designers and the makers are “some of the biggest missing aspects of the profession.” He laments that without this robust and involved process there is no “direct push and challenge, or prototyping” emerging from a design process, often leaving the designer’s role as merely choosing a series of finishes, fittings and furnishings from a shopping list.

The design responds to the curves that shape the exterior and interior of the building. Using an existing wood-panelled, curved interior wall as a datum, the modular set out of the office spaces slip in an offset manner. Replicating the gesture of the sensuous Art Deco curves over and over again to create the office modules was the only aspect of the design that was embedded in CAD processes. The rest of the detailing, says Woods Bagot head of interiors Todd Hammond, was done through sketching on-site by Boris Tosic and his team. It could be tempting to speculate that at a time when building information modelling is seen as essential to innovative design, resorting back to a dialogue between designers and builders, communicated through conversations, pen and paper, has resulted in a project of such excellence. Hammond justly notes that it “can’t be benchmarked in the sector,” a statement that anyone who has experienced the space would find hard to refute.

The totem of this collaboration is the brass sculpture (that also functions as a kitchen island) by Morgan Shimeld. Where it would have been all too easy to produce a marble-clad, waterfall-edged island in the middle of the shared kitchen space, Alvaro and Tosic opted to work with the sculptor to produce a unique centrepiece to the project, responding to the internal geometric and material games of the scheme – cherry wood, walnut, brass, mirrors, leather and limestone. The level of crafting on the piece is not the run-of-the-mill kitchen joinery job; its finesse and sculptural presence is more akin to a piece of art.

It is hard not to eulogize this project, but it is rare to come across such design dedication in an office environment.

It is hard not to eulogize this project, but it is rare to come across such design dedication in an office environment. Credit is deserving of the Tosics for actively choosing to invest in design, for not skimping on quality and for believing in the role of good design in relation to innovative work practices. Woods Bagot also deserves praise for its commitment to the clients and their vision, lending expertise and enthusiasm to this small-scale Surry Hills gem.

A compact bar provides a hotel-like offering to foster a collegial atmosphere. Artwork: Jim Morrison Was Here (2014) by Ben Quilty. 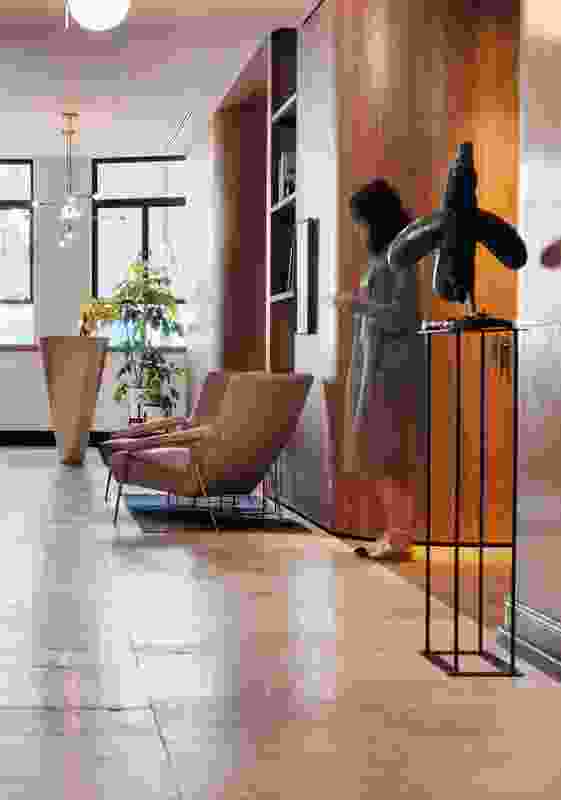 The waiting area gives visitors a sense of what paramount offers – an elegant mix of domesticity and hospitality in an office setting. Sculpture: Charles (2011) by Thomas Campbell. 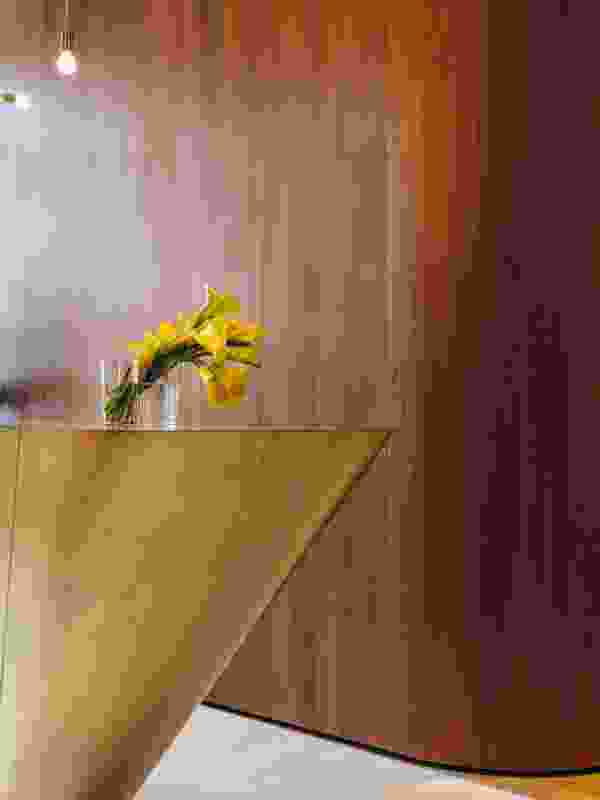 The kitchen island, appearing more like a brass monolith, was made by sculptor Morgan Shimeld. 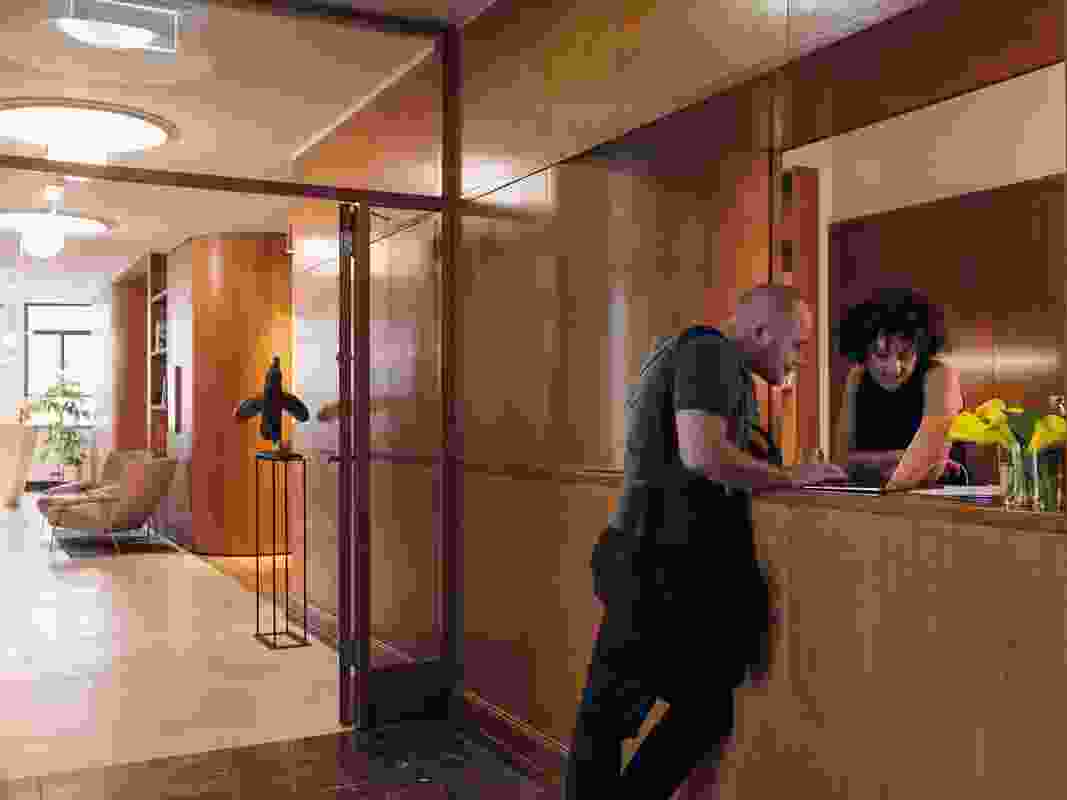 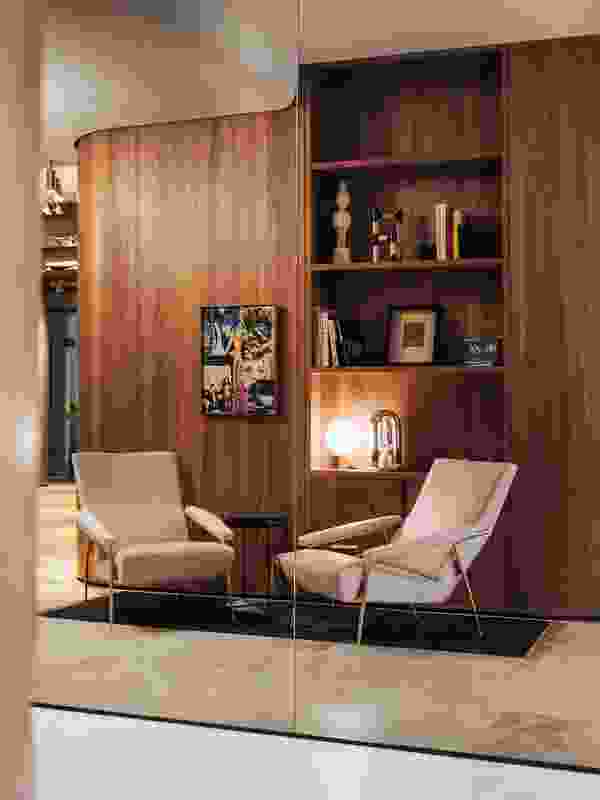 The client wanted paramount to reflect the successful professionals that work there. Artwork: Untitled (1970) by Richard Larter. 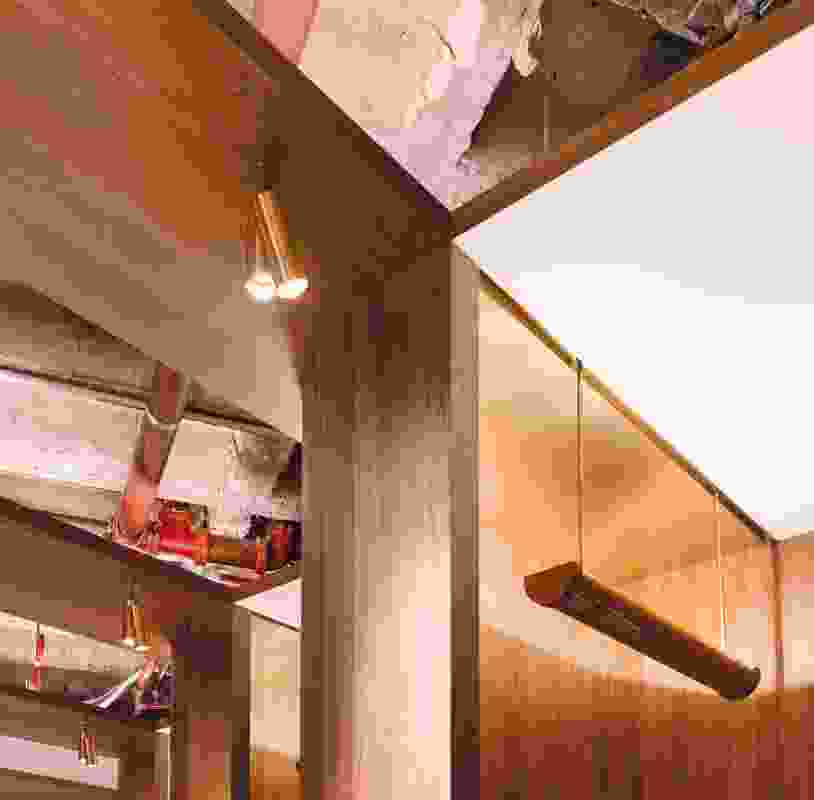 A three-dimensional feature ceiling of timber and brass links the individual elements within the office. 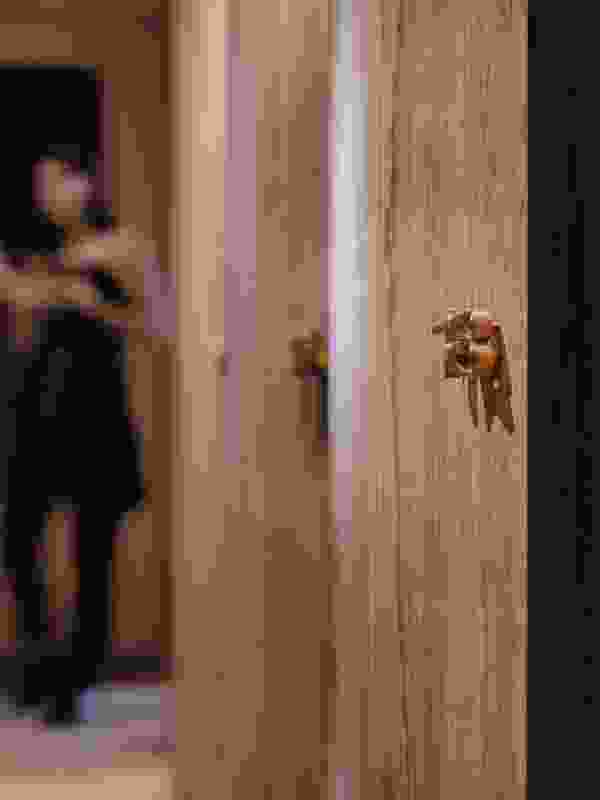 The bass office numbers were designed by Sydney studio DAAST. 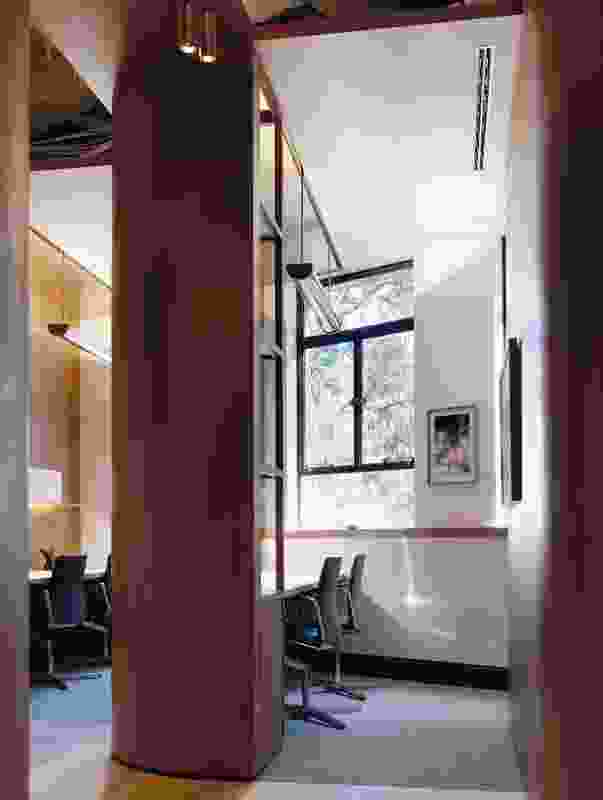 The suites optimize natural light and most have views to the street and Park. Artwork: Night in the city (2007) by Mark Humbly. 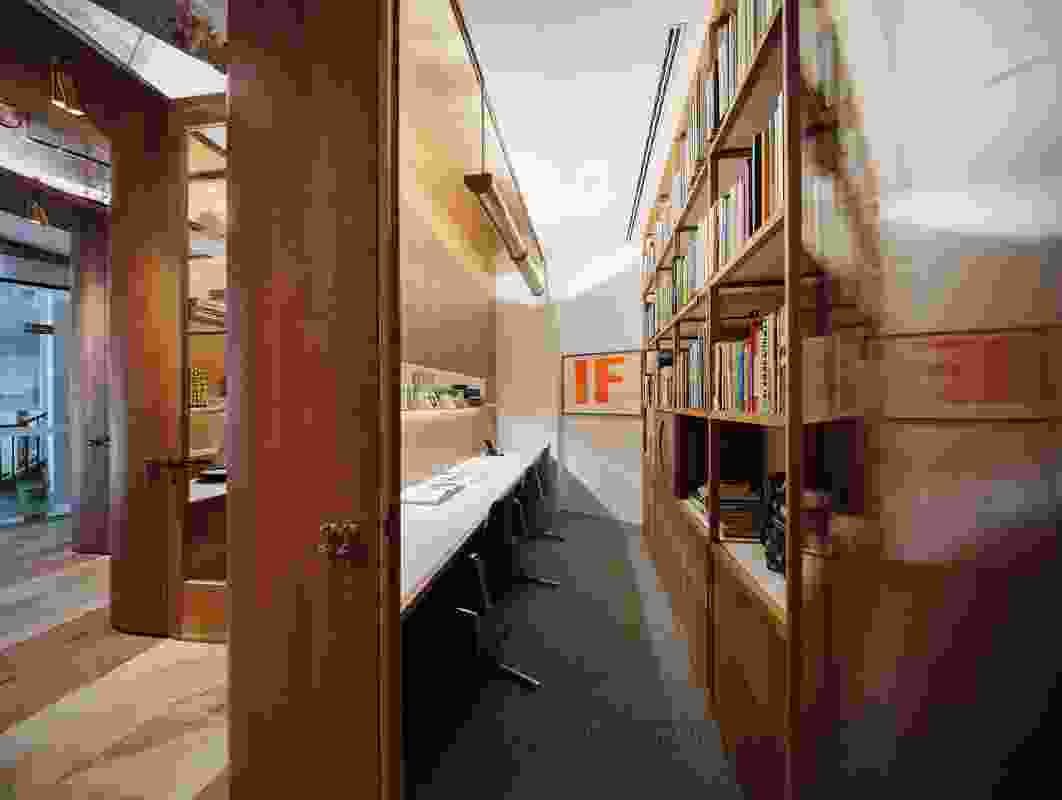 The suites are semi-enclosed for acoustic privacy. Artwork: If (1965) by Corita Kent.

The building’s form is echoed in the curved office suites. Artwork: Meaner (1985) by Julije Knifer. 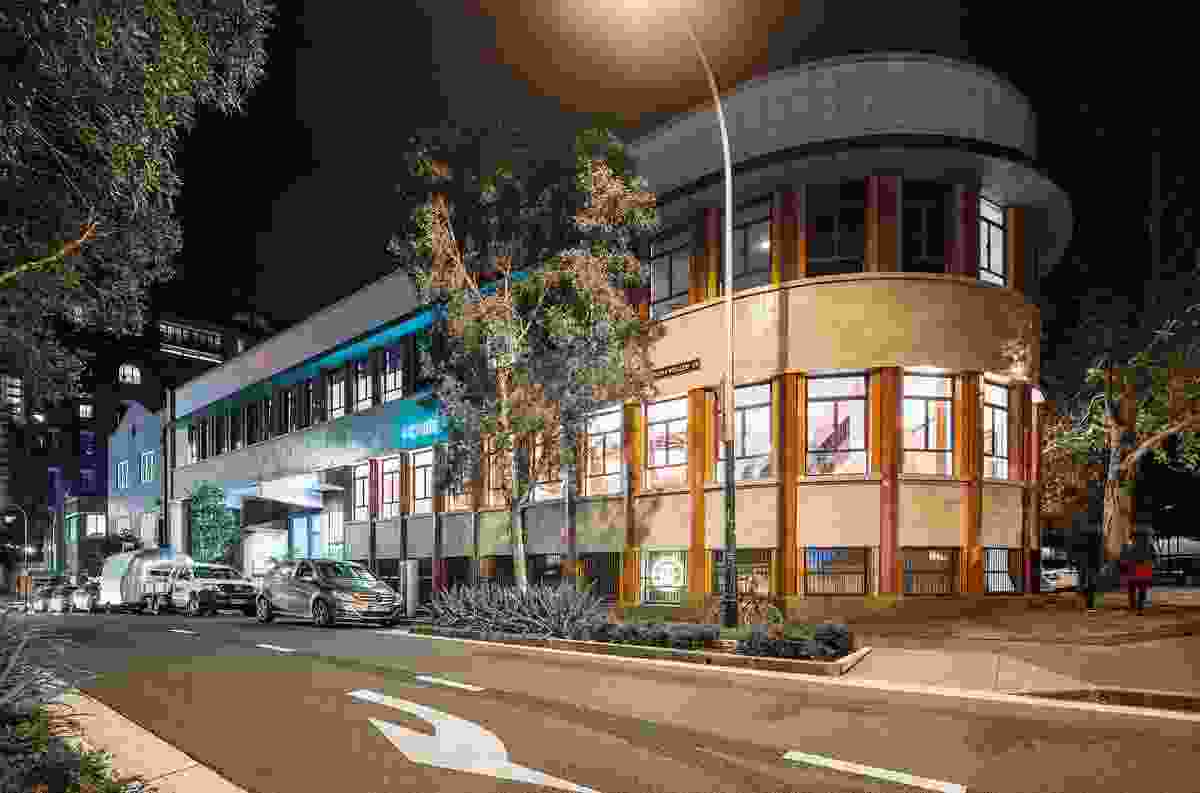 The heritage building set down a certain geometry for the interiors. By celebrating the original fabric of the Paramount building, a stronger design outcome was achieved.