Parks, piers and boulevards among final proposals for Barangaroo South

Designs of the public spaces for the last unplanned areas of the Barangaroo South development in central Sydney have been unveiled. A public waterfront walkway, an “amphitheatre-style” pier and a one-hectare park are among the developments proposed by Lend Lease, with landscape architecture practice Grant Associates responsible for park and garden design. The Barangaroo Delivery Authority said the proposal fulfils the Authority’s commitment to delivering more than half of Barangaroo as open public space, although this figure has been disputed by the City of Sydney which says that the developers have inflated the figure by including roads servicing the casino.

Grant Associates is known primarily for its work in the UK and Asia, including the 2012 World Architecture World Festival Building of the Year-winning Gardens by the Bay complex in Singapore with Wilkinson Eyre, Atelier One and Atelier Ten. In Australia, the practice collaborated with Cox Richardson Architects on the masterplan for the Royal Botanic Gardens in Sydney.

The area covered by the plans encompasses the seaward area around the contentious Wilkinson Eyre-designed, 75-storey Crown Sydney Hotel Resort building. Initial plans placed the casino tower over the water, which led the NSW government to mandate that the building be built on land. Lend Lease and Crown then moved the building onto foreshore land previously earmarked for a public park.

The independent NSW Planning Assessment Commission (PAC) approved the Crown proposal on the condition that a promenade be built to provide public access along the shoreline and that Hickson Park be increased in size to compensate for the lost park space. Australian Institute of Architects NSW chapter president Shaun Carter described the decision as “disappointing” to ArchitectureAU at the time, arguing that “reading the PAC assessment [the PAC] clearly had significant misgivings about the proposal,” and that PAC “felt their hands were tied over the Casino Control Amendment (Barangoo Restricted Gaming Facility) Bill 2013,” a separate piece of legislation governing the casino specifically. In announcing its decision the PAC said “it had no power to direct relocation or to change the associated legislation and, therefore, accepted that the Crown Sydney Hotel Resort would remain in the location mapped.” A legal challenge mounted by local residents that attempted to clarify the commission’s authority failed in December 2016.

The promenade appears in the proposal as Waragul Walk, a 30-metre-wide boardwalk and path that “hugs Sydney Harbour along the entire length of Barangaroo.”

The proposed Hickson Park sits behind the Crown tower and has been designed to offer a different experience to the other parkland developments in Barangaroo. Barangaroo Delivery Authority design adviser Bob Nation said, “The Reserve catches a lot of direct sun, as will the western-facing parklands in Central Barangaroo. Hickson Park will get the northern sun in winter, but will be more sheltered from the wind and the hot western sun in summer.”

The park will be connected to the harbour by a 113-metre-long “grand tree-lined boulevard” that will empty onto Watermans Cove, a curved “amphitheatre” at the centre of the development that will allow visitors access to the water “to take their shoes and socks off and dip their feet in Sydney Harbour.” The design is fully accessible. The Cove would neighbour the three commercial International Towers by Rogers Stirk Harbour and Partners and the One Sydney Harbour residential towers by Renzo Piano Building Workshop.

The Barangaroo Reserve, a park at the northern end of Barangaroo designed by Johnson Pilton Walker in association with PWP, was completed in 2016 and won a National Landscape Architecture Award.

The plans will be put on public exhibition as part of a development application to be lodged with the Department of Planning and Environment.

Parks, piers and boulevards among final proposals for Barangaroo South 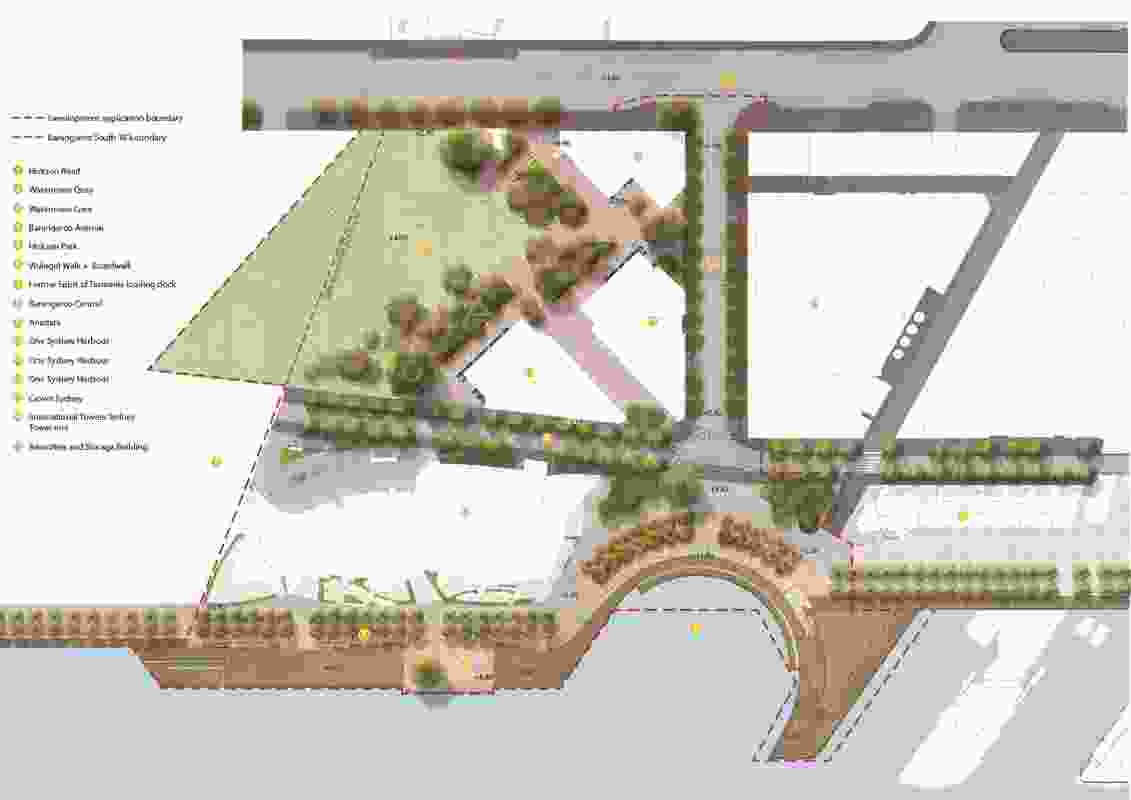