A sensitive reworking of a traditional cottage has transformed not only the house but also its owners, who initially felt indifferent about the prospect of renovating.

The double-storey addition reinterprets the form of the heritage cottage to become its “bigger sibling.”

After she had lived in her renovated house for several months, homeowner and client Gillian sat down to write a list for her architect. She was somewhat surprised at how easy she found it to compile more than thirty-five bullet points to describe the joy she and her husband, Richard, experience in their new home. But no-one was more surprised than their architect, Philip Stejskal of Philip Stejskal Architecture. “It was quite unusual to receive such a list,” Philip says. “It’s the first time that we’ve had client feedback documented so formally.”

The couple had bought the house – a picture-book corner cottage in South Fremantle, Western Australia – for Richard’s mother in 1990, when she moved to Australia. She lived there for twenty-six years before she passed away. At that point, Richard and Gillian carried out a cosmetic overhaul, repainting inside and out and removing the carpets for polished timber floors before renting out the tiny house for four years.

More recently, the couple undertook a more substantial renovation – they wanted to enlarge and update the home without sacrificing any of its charm or their precious family memories. “We hadn’t planned to build a house at this stage in our lives, but because we had this lovely cottage, and we knew how this great corner block worked with the weather, it made sense,” Gillian says. “Before we started this project, I wasn’t interested in building, or houses, or the things in them.” But while they began the renovation somewhat reluctantly, they couldn’t be happier with the outcome.

On the advice of friends, Gillian and Richard had engaged an architect and builders. They found an easy rapport with local architect Philip Stejskal and gave him a short wishlist: “I wanted a plumbed-in dishwasher, because for twenty-five years I’d wheeled one across the kitchen floor every night; a garage, because I’d never had one; and a pitched roof, because we had one of those [on our existing home] and I liked the sense of space,” Gillian says. “And I wanted it to feel like a beach house, with white weatherboards and a bougainvillea growing up over it.”

The first scheme that Philip presented had a flat roof and was quickly dismissed by the couple, but his second response nailed the brief. Opting to keep the cottage’s two original rooms, Philip removed several lean-tos, creating space for three pavilions at the rear. One contains the main suite, the second includes a bedroom, family bathroom and laundry, and the third is the new double garage, accessed via the side street.

Philip arranged the new forms around three courtyards on the diminutive block, two at the northern side of the house and one to the south. These now function as a productive fruit and vegie garden, a gathering space and a utility court with a washing line and an outdoor shower.

The two rear pavilions are topped with a first-floor “great room,” accessed via a whitewashed timber staircase in the relocated main entrance. The rooms downstairs, which are accessed via a traditional hallway, echo the compressed dimensions of the original dwelling, although they boast more natural light and garden outlooks. These spaces give little hint of the surprise that awaits upstairs: a single room containing kitchen, dining and living areas has openings on four sides that offer district views in every direction. The pitched roof gives this space its own character while tying it back to the front cottage, now viewed as the “little sibling” on this site, Philip says.

“The front cottage has no eaves, which doesn’t fare well in this climate. To use the archetypal pitched-roof for the extension, and rather than introducing eaves, we thickened up the walls of the first floor and placed windows into deep reveals, except to the north where we’ve installed attached horizontal sun shades,” he explains.

The use of black accents to define the openings and the structural ring beam imparts a sense of solidity and containment to this elevated space. The black-and-white interior is softened by sculptural grey curtains and a palette of muted colours on the outdoor shutters, derived from a photo taken by Philip at nearby South Beach on a squally winter’s day. The shutters can be closed against afternoon sun or storms, or opened up to direct breezes through the space.

The project has helped to establish Gillian and Richard in their new neighbourhood and opened their eyes to the rewards of renovating. “From the kitchen sink, I can see people walking, bicycling or driving past,” Gillian says. “If I’m out the front gardening, people often stop to ask about the house. They are fascinated that we’ve owned the block since 1990, and that we didn’t want the renovation to be a huge change.”

Although Gillian initially had little interest in renovating, she now appreciates the process. “After we moved in, when I saw the different shadows, the ways the light worked and the lightness in the rooms, I couldn’t believe it,” she says.

Every couple of weeks, as Gillian observes changes in the seasons or the surroundings, she sends Philip another message. Sometimes she includes photos – of kookaburras in the Norfolk pine at breakfast time, or the sunrise from the kitchen window – with a brief note of appreciation. For Philip and his team, these messages serve as a welcome reminder that architecture has the capacity to deliver an evolving series of unexpected delights. 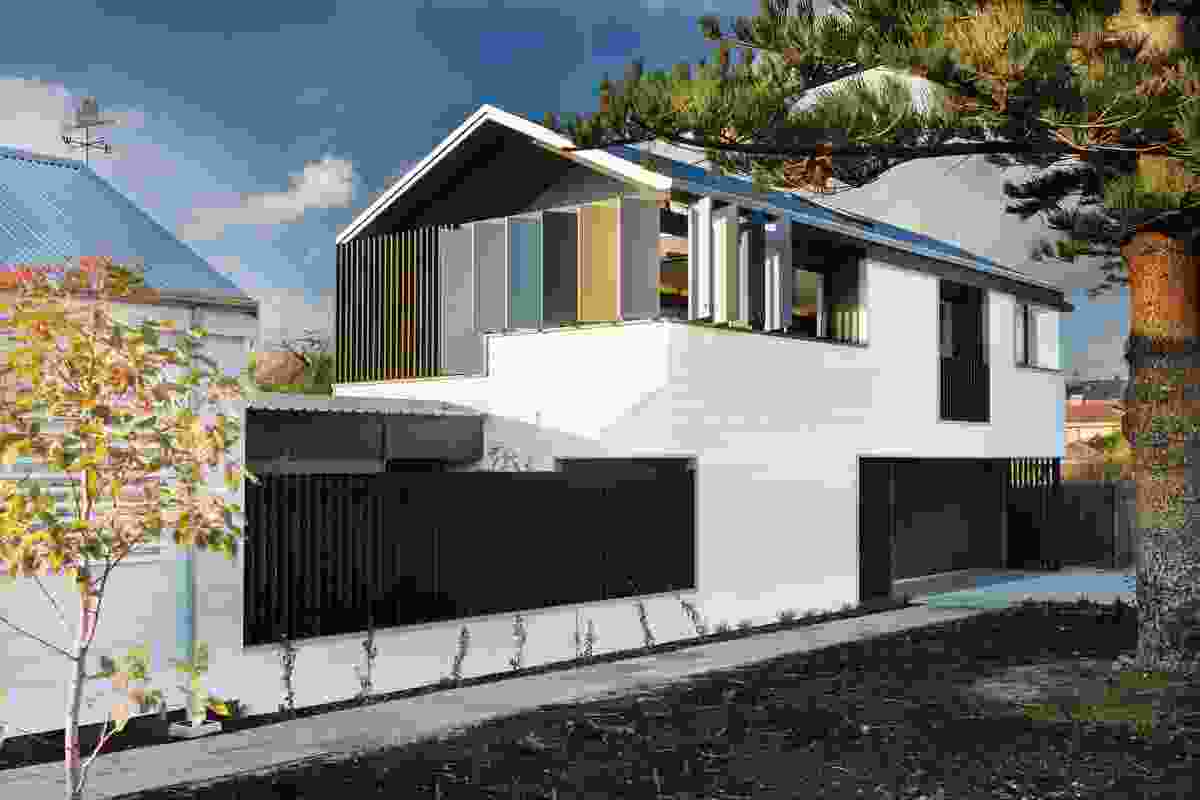 The double-storey addition reinterprets the form of the heritage cottage to become its “bigger sibling.” 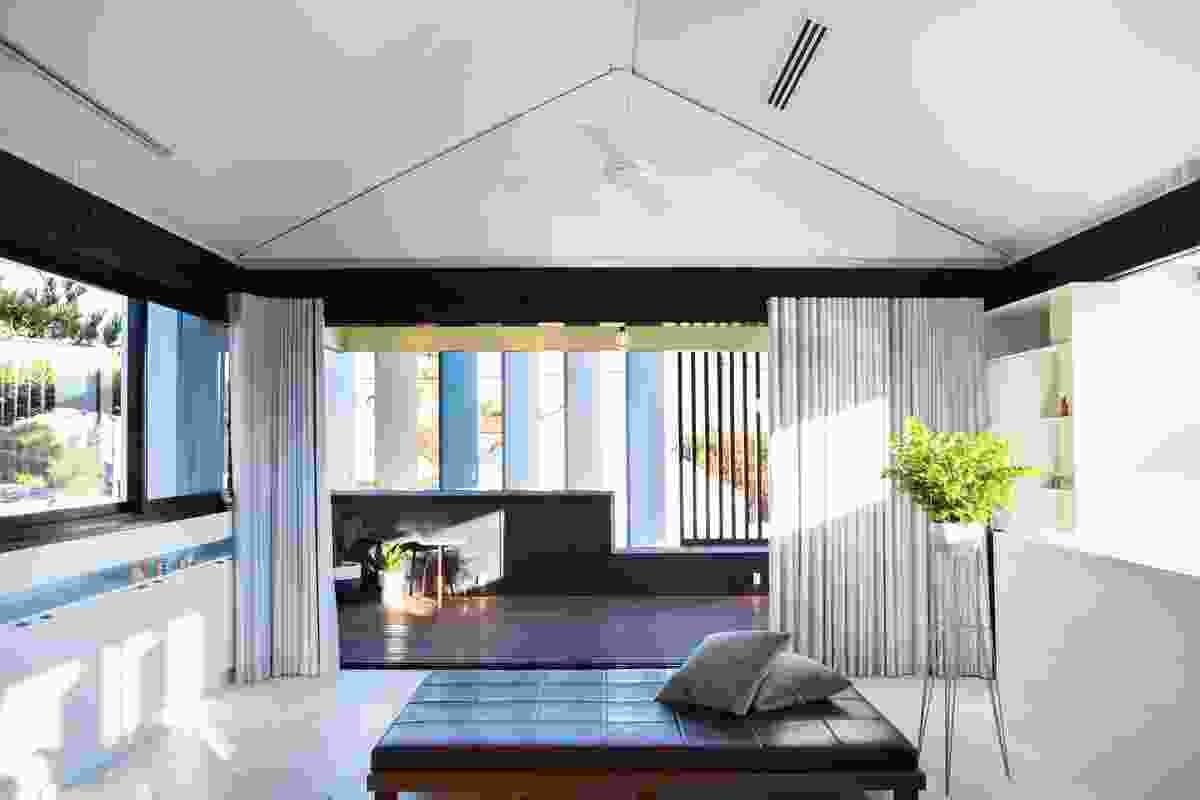 The black-and-white interior is softened by sculptural grey curtains and the muted colours of the outdoor shutters. 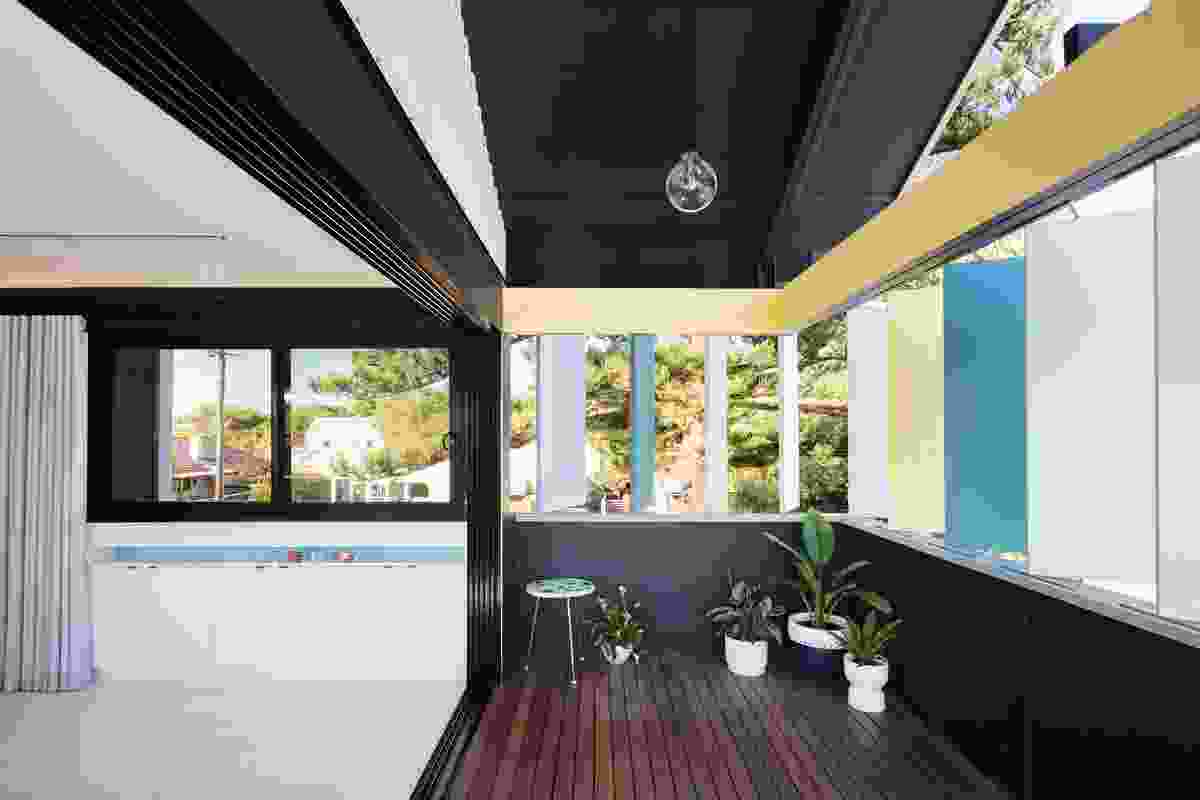 The shutters can be closed against afternoon sun or storms, or opened up to direct breezes through the space. 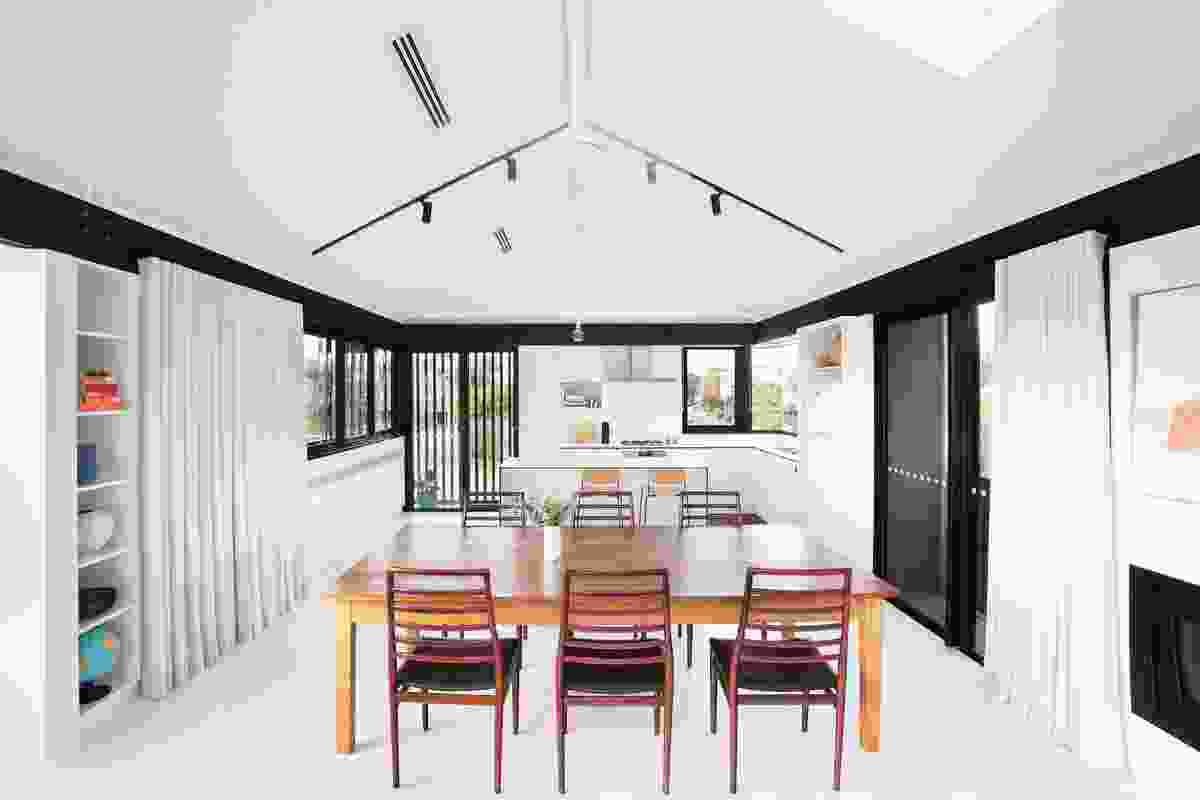 The main living space has openings on all four sides that offer plentiful light and district views in each direction. 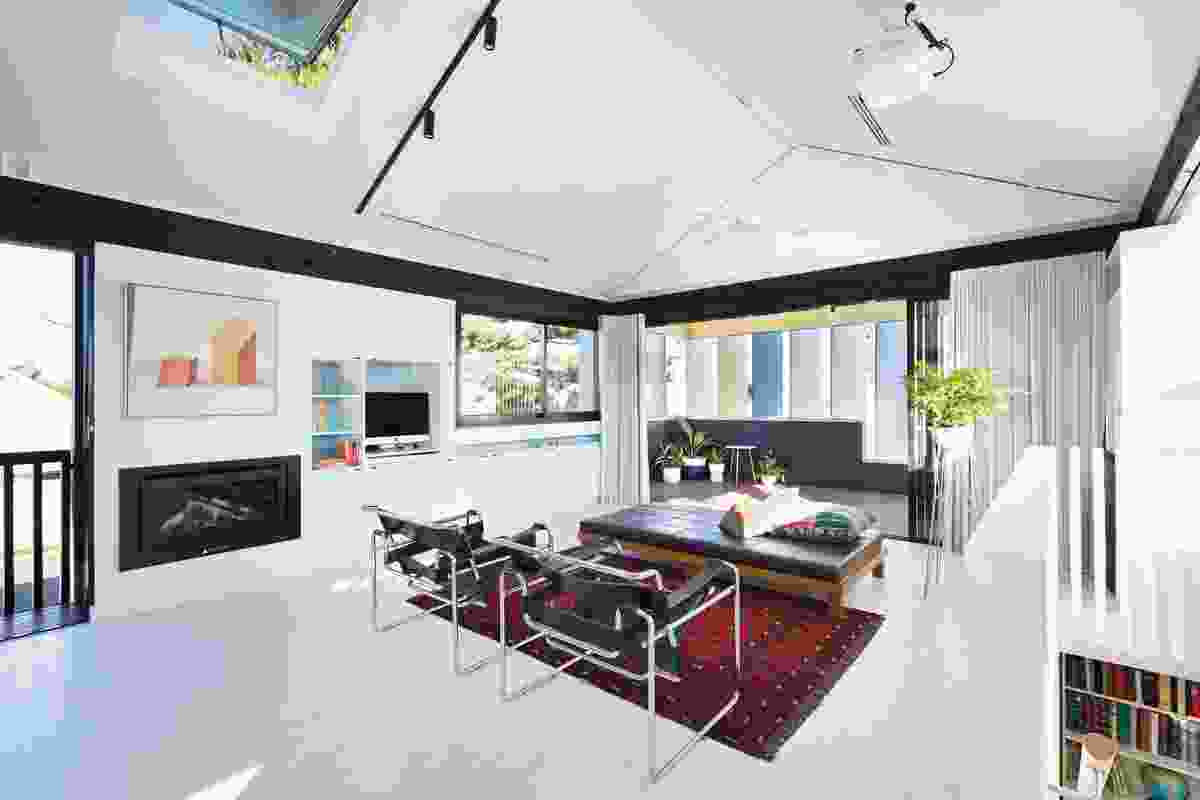 A pitched roof gives the new space its own character, while also referencing the form of the original cottage. Artwork: Ron Nyisztor. 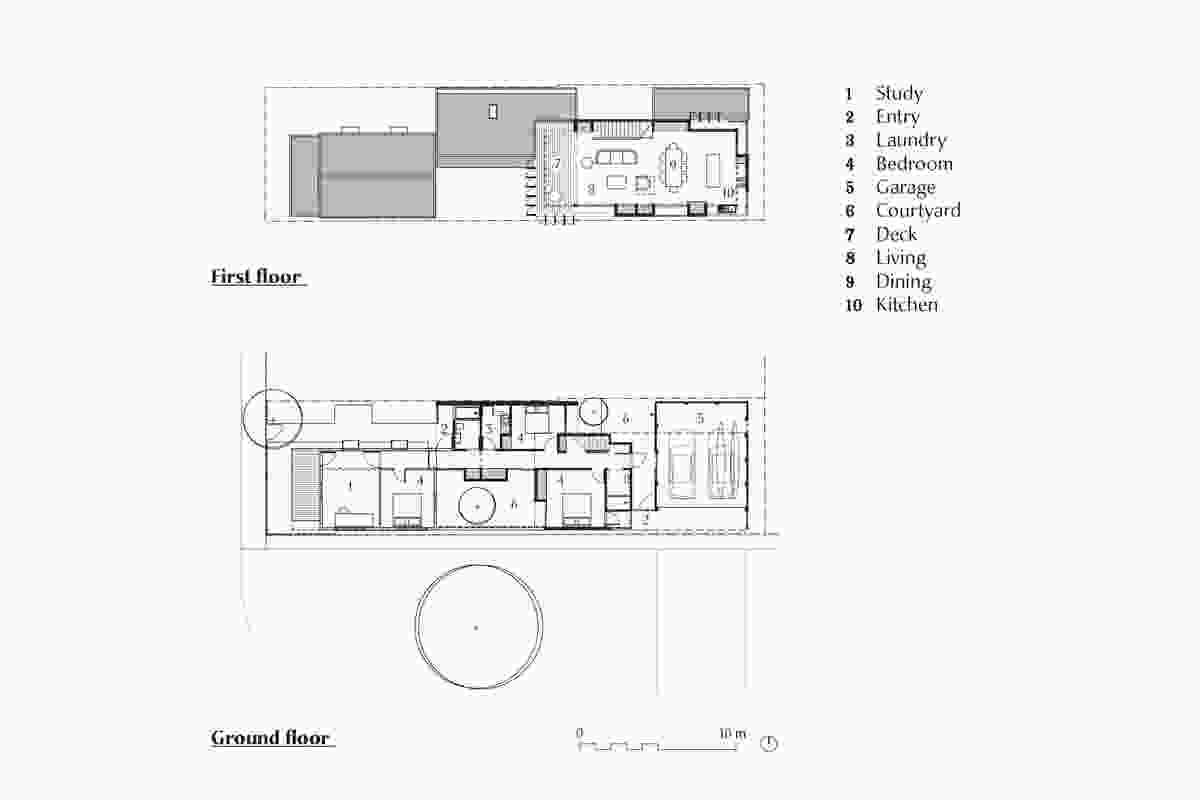