Not just another inner-urban renovation. This unique design has been expertly tailored to suit the needs of its clients.

A lowered “bulkhead” corridor ceiling emphasizes the transition from the original house.

The story of this renovation starts in familiar territory: a relatively dense and intact Victorian streetscape, the property in question a single-fronted freestanding weatherboard house kept largely intact at the front and, one suspects, somewhat more radically altered at the back. This staple of the inner-urban architecture world typically throws up few surprises, but with the team from Architects EAT on the job, the script has been subtly rewritten, resulting in a residence that is anything but generic.

In broad terms, the pattern of the house is what one might expect. The front half of the original house has been retained, forming two bedrooms and their associated bathroom. The spatial arrangement of the original house is typical of the period: a long hall on the western side, with rooms arranged shotgun-style on the eastern side. The designers have chosen to work with this organizing schema rather than to fight it, and the new part of the house – a substantial extension on the rear half of the block – is ordered by the continuation of the circulation spine down the western boundary. On entering, the visitor is offered a long view down the length of the house, the full length of the block, terminating in a staircase winding up to the master bedroom suite.

From the “old” house, one steps down into the new open-plan living space. To emphasize the circulation pattern in the house, and to create a sense of transition from the old to the new, the designers have created an area of lowered ceiling that forms a bulkhead. Clad in timber with a charcoal stain, this lowering of the ceiling stands in sharp contrast to the adjacent living space, where the pristine white ceilings soar up to their full 4.2-metre height.

The living space extends out into a private courtyard, which is the “lung” of the house, and allows light and air inside. The courtyard responds to a modest need for outdoor space, and it has been carefully designed to manage heavy downpours and to avoid flooding. This is an important consideration as the rear part of the house is partly subterranean, primarily to keep down the overall height of the house. The backdrop of the courtyard is the only two-level part of the residence, a wing that contains a jeweller’s workshop below and the main bedroom suite above.

The facade of the main bedroom is the only external elevation visible in the architecture, and in the interests of privacy as well as aesthetics, the designers have completely clad this elevation in timber battens over a glass wall. The architect describes the impression from the interior as a “tree house” effect. It has more in common with the custom of providing screened, private rooms in traditional Middle Eastern houses, which overlook the busy, more public spaces of the house below.

This question of passive surveillance is an important one, and the house is sharply divided by a subtle hierarchy. The “public” zone comprises the original house and the living spaces. These lead to the courtyard, which, with its flanking, modest library wall, forms the dividing line. Moving past this point, one enters the private zone of main bedroom and ensuite on the upper level, and secure jeweller’s workshop on the lower level.

The workshop is a unique space that was purpose-designed for one of the house’s two owners, who runs her business from the site (although she exhibits her pieces elsewhere). To meet the pragmatic requirements of the craft (low light levels for soldering), and in response to the preciousness of the materials and pieces contained within, the workshop is recessed back from the upper facade and is dug into the ground. Despite this, it is still possible for the jeweller to sit at her computer and see deep into the public part of the house, by virtue of a recessed, wide, horizontal slot window.

The palette of the house is typical of Architects EAT’s portfolio and portrays a preoccupation with texture and subtle materiality expressed in neutral tones, rather than bold colour or “featurism.” The exposed walls of the new part of the house are simple, concrete blocks painted white, and the soft texture catches the changing light. This is most apparent above the kitchen splashback, where the skylight bathes the wall in light. Similarly, the raw polished concrete floors show evidence of the trowel marks of their making, a process that the architect describes as “exciting” in each new project because the outcome is hard to predict.

In creating this home, the designers at Architects EAT have responded to a combination of constraining site factors and a desire for a subtle, finely balanced hierarchy of function and internal privacy. The result is a house that is unique to its site, and to the needs and desires of its appreciative client. 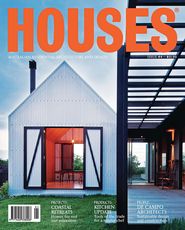 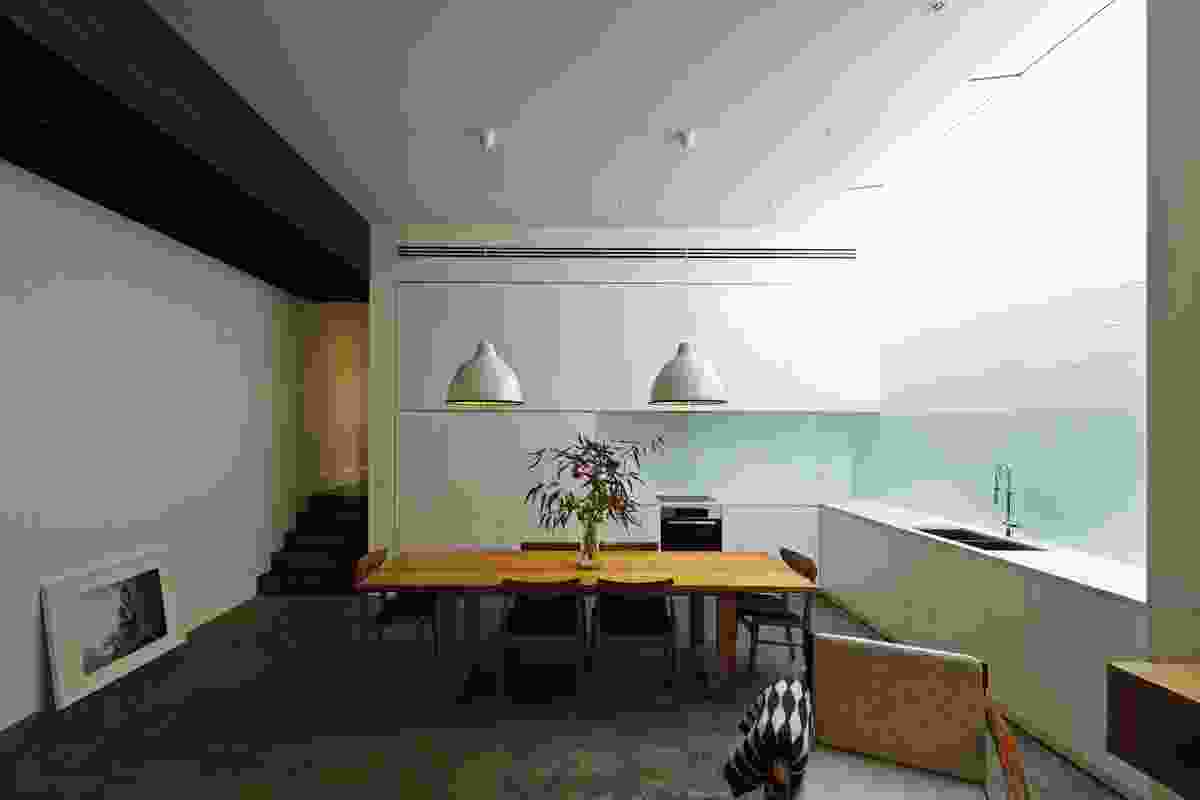 A lowered “bulkhead” corridor ceiling emphasizes the transition from the original house.

The new kitchen and living space of Parure House looks across a courtyard to the new main bedroom suite and studio. 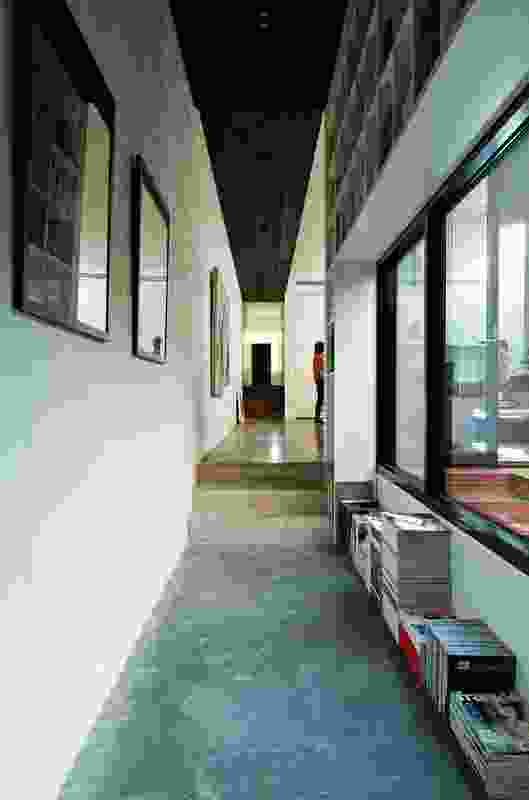 The library wall flanks the courtyard. The original western corridor now extends the full length of the site. 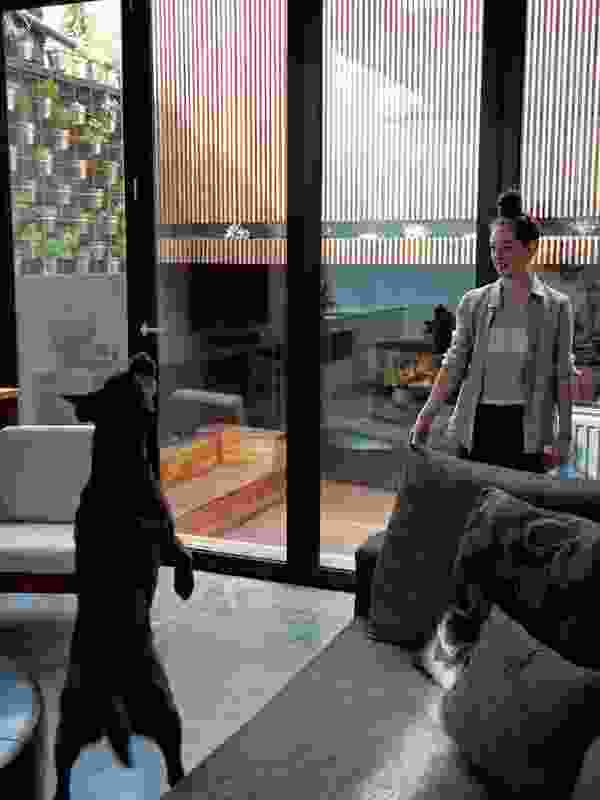 Looking across the courtyard from the living room. 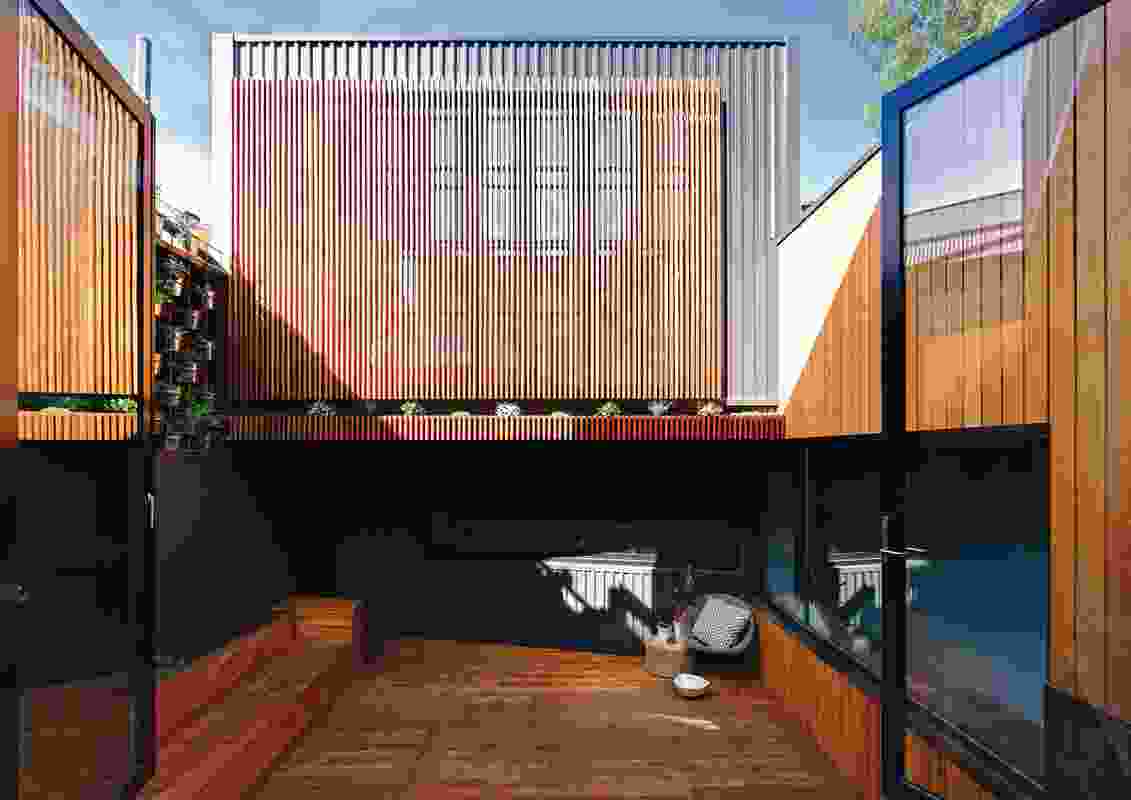 On the far side of the courtyard, the “tree house” main suite, with its timber battens over glass, overhangs the sunken studio. 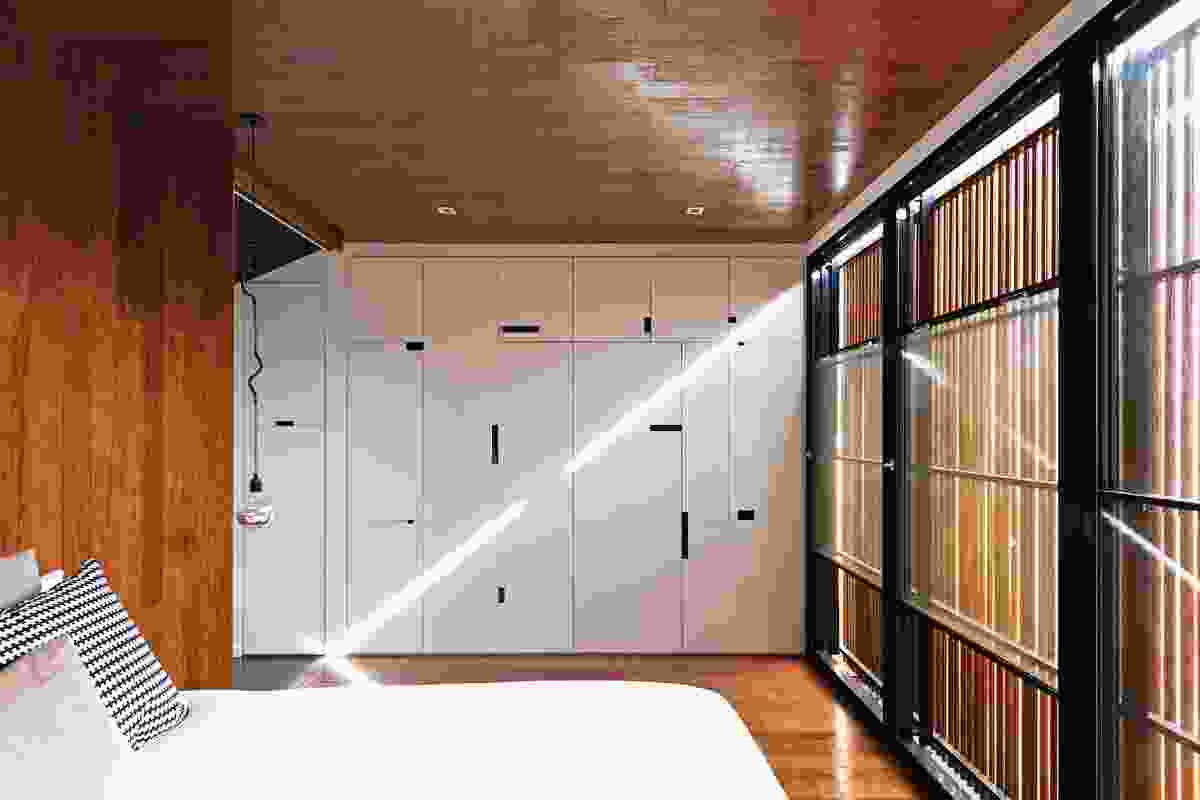 Sunlight streams into the main bedroom, which provides a filtered view of the courtyard. 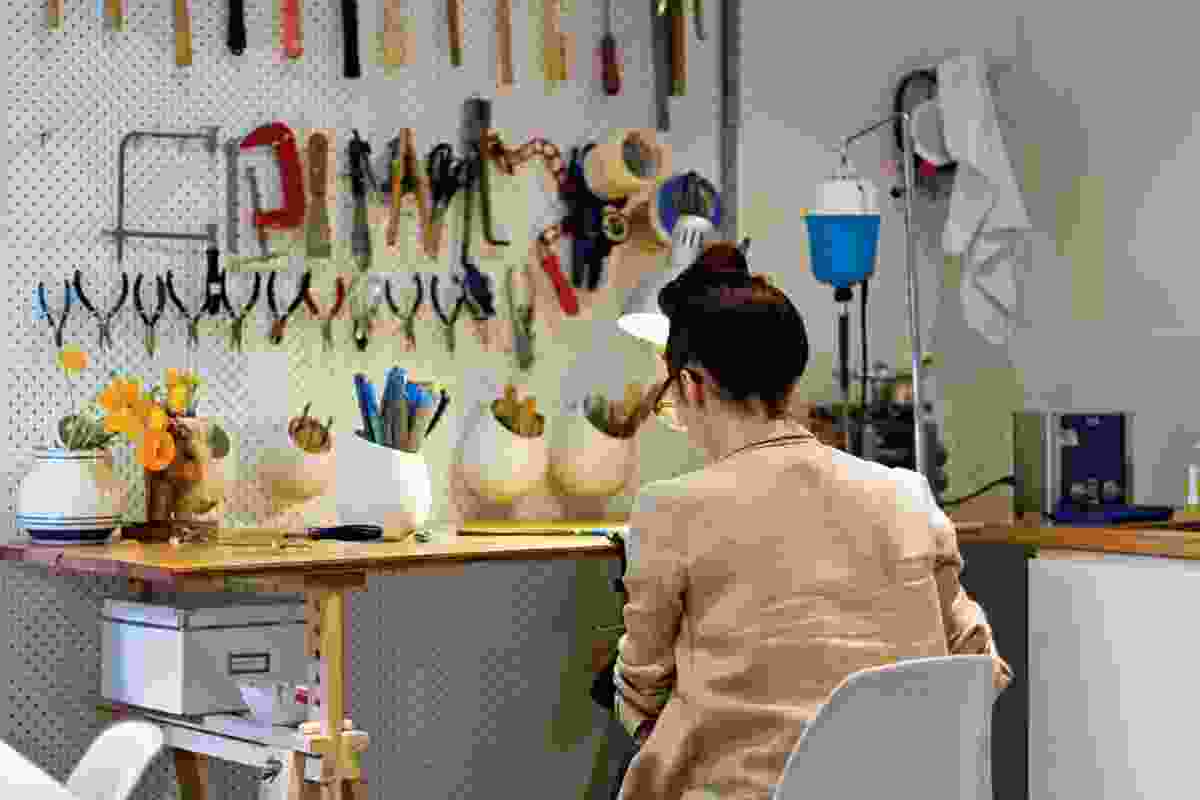 The jeweller at work in her secure studio, which features the low light levels needed for soldering. 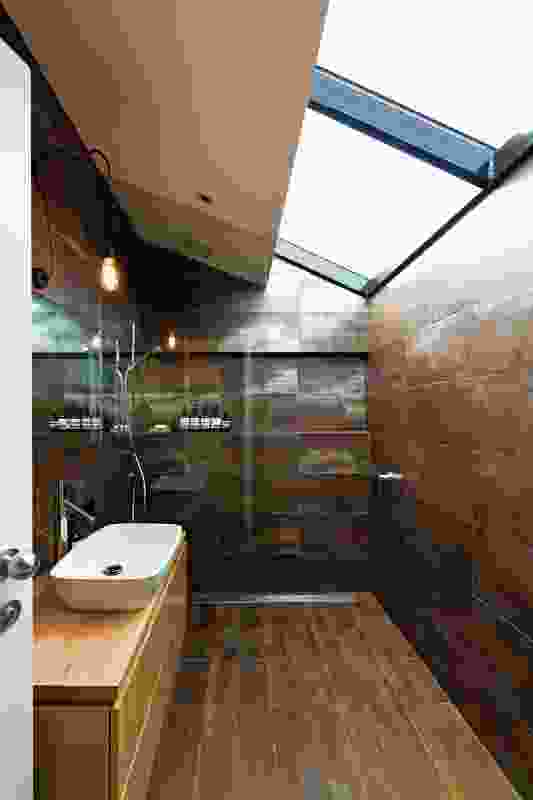 In the bathroom, as throughout the house, natural light is emphasized by simple, strong materials.