Living the dream: trekking in the Everest (Khumbu) region of Nepal, the looming peaks of Everest, Lhotse and Nuptse before me.

If the weather gods are favourable, the Khumbu region of Nepal is heaven in October. Clear blue skies, brilliant sunshine and pure mountain air, coupled with the spectacular panorama of the majestic Himalayan peaks. This is the setting as you trek ever upwards.

On route to the villages of Khumjung and Kunde lies a grove of stunted fir trees atop a low ridge and a commanding rusticated stone stair, almost Inca-like, leads the happy trekker to the Hotel Everest View, Syangboche, Nepal, at 3,880 metres above sea level. A low-lying horizontal form with flat roof, stone paved terrace and stone buttress columns. As my trekking party headed for the terrace and Gorkha beers, I had the opportunity to explore this unexpected ‘Wrightian’ find.

Its dry-stone masonry walls bear a discernible pattern and subtle variations in the alignment of blocks: some protrude, others recede. Architectural theorists might describe this as ‘techne’ – evidence of the craftsman’s hand. Though it’s principally single-storey, the building’s easy spatial flow is achieved through the interplay of half levels. From entry, guests move into the main building, going up a half flight of stairs to the casual dining and lounge areas, guest rooms and outdoor terraces, or a half flight down to the formal dining area and lower terraces.

A sense of absolute calm prevails through the interior. The humility of this very simple stone lodge echoes the Nepali people – humble in the presence of the mighty peaks surrounding them. Rather than the obvious use of glazing en masse, the architect has positioned picture windows at key nodes in the floor plan, gradually revealing the breathtaking views in a way that carries more impact than an obvious panorama might.

Familiar details catch the eye: lacquered timber ceilings continuing as a single planar surface, a timber panelled door to the entry vestibule, slate floors – warmed in the lounge and dining areas with richly coloured and textured rugs – and the beautifully proportioned mullion spacing to window fenestration. In this valley, with the sheer verticality of the nearby looming peaks – Everest, Lhostse, Nuptse and Ama Dablam all around, the hotel’s horizontal and heavy-block construction anchoring it to the earth underscore this as a place of shelter, and a sublime moment of architecture in the great Himalayan landscape.

It was some three years after attending a talk by the late Australian mountaineer Lincoln Hall that I found myself living this particular dream: trekking along the main walking route in the Everest (Khumbu) region of Nepal. Flying in aboard the tiny 15-seat Twin Otter aircraft, we rose above the clouds that blanket the polluted and chaotic city of Kathmandu. This is the first real glimpse of the majestic Himalayan peaks, and all heads in our two-metre wide plane are turned, smiles abound, cameras click.

Our trek began from the very Tyrolean village of Lukla at 2,800 metres above sea level. In the brilliant sunshine it’s like looking through a polariser – enhancing colours in the clean air: the cobbled stone paths that run through the village, the marigolds and lupins in bloom among lush vegetable gardens, the children at play on stone thresholds and dogs that yawn, give a lazy stretch then go back to sleep. Our destination was Gokyo Ri and the Renjo La pass, some 5,400 metres above sea level.

There are no roads or vehicles here – everything is carried in and up. The early days of our trek had taken us through the villages of Ghat, Monjo and up to beautiful Namche Bazaar. We crossed and recrossed the Dudh Kosi river on steel suspension bridges that sway more as you reach their mid-span over a 200-metre drop below. The altitude gain brings a noticeable change in the scenery as we pass through fir, juniper and rhododendron forests.In Namche the surrounding mountain peaks merge with the sky; such a contrast to our flat Australian landscapes.

From Namche, the green forests give way to dry glacial moraines that surround the villages of Khumjung and Kunde. The great peaks loom – Everest, Lhotse, Nuptse, Ama Dablam (dubbed the Matterhorn of the Himalayas). As we rise above the tree-line bad weather sets in and we walk in deteriorating conditions of snow and sleet till we are eventually marooned for two days 4,770 metres up in our little orange tents at Machhermo base camp. With the onset of avalanches close by we decide to change our trekking itinerary and head on down to Tengboche and from there back to Lukla.

Despite best efforts, I found no details about the original architect(s) of the Hotel Everest View, Syangboche. The hotel is dated as having opened in 1973. Further information on the hotel and associated activities can be found online. 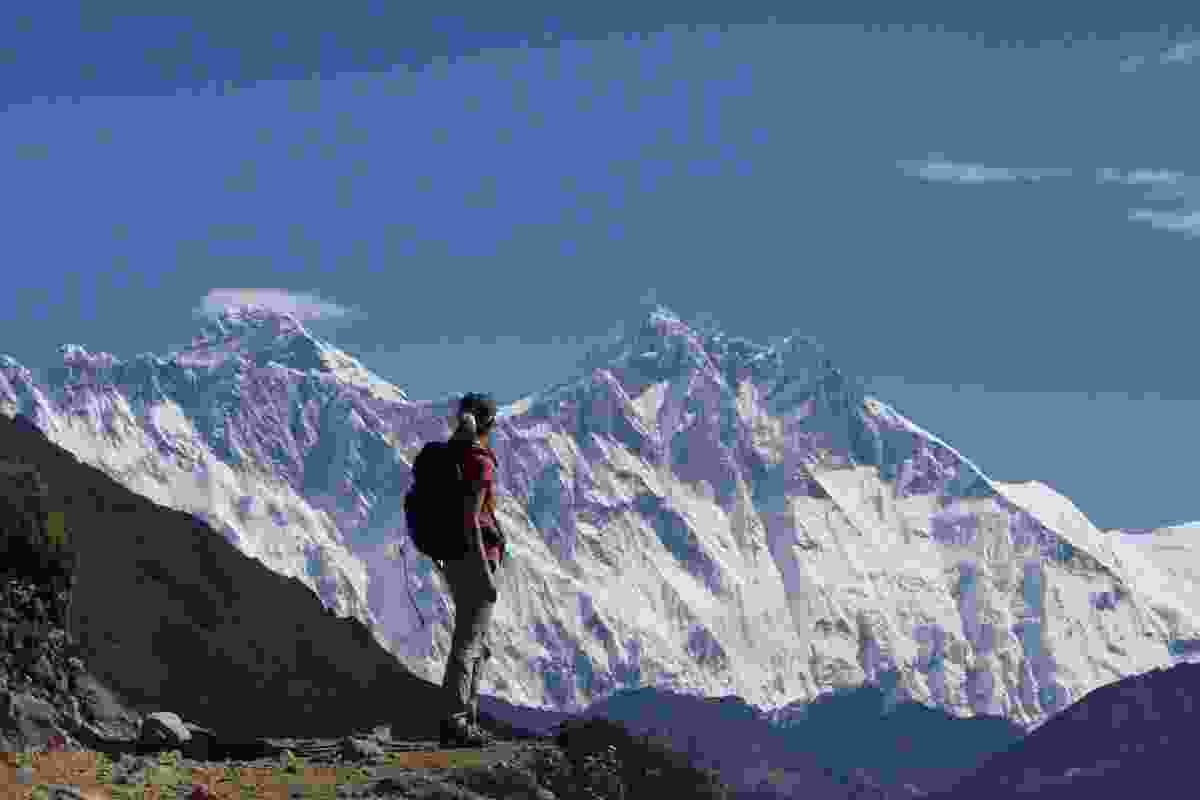 Living the dream: trekking in the Everest (Khumbu) region of Nepal, the looming peaks of Everest, Lhotse and Nuptse before me. 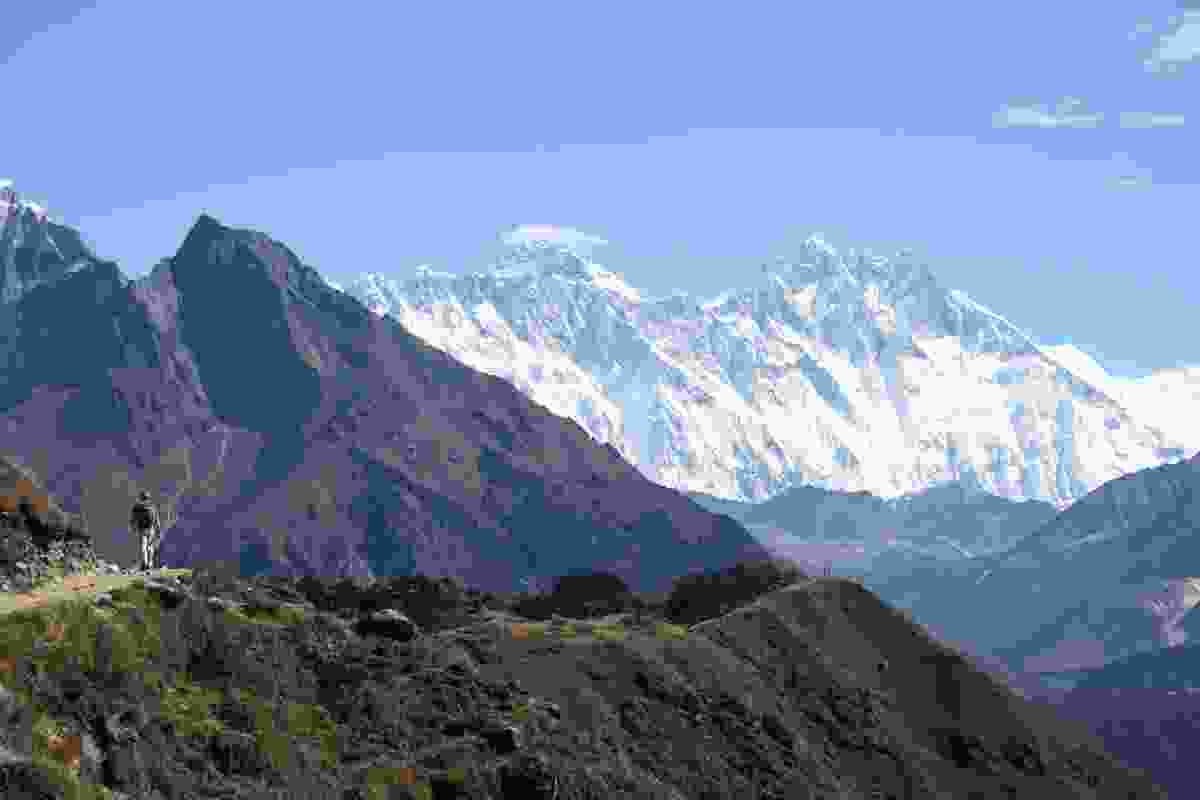 Along the walking route in the Everest (Khumbu) region of Nepal. 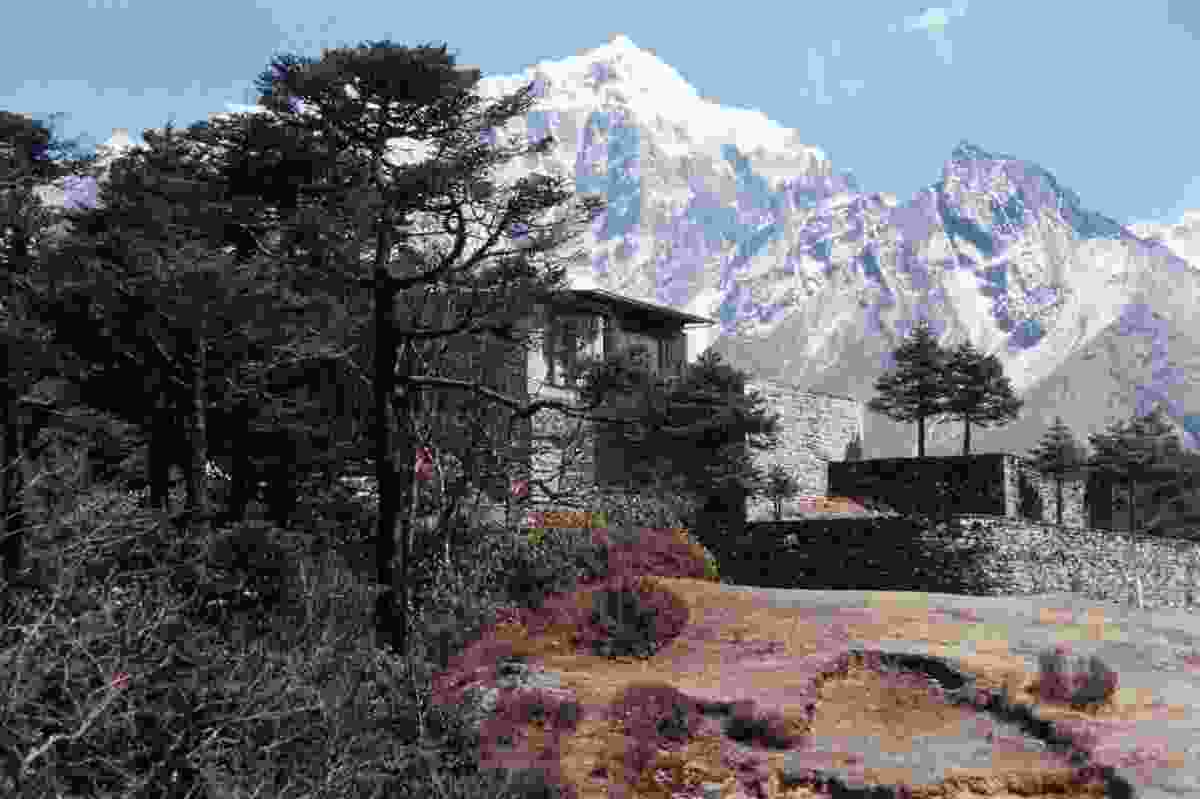 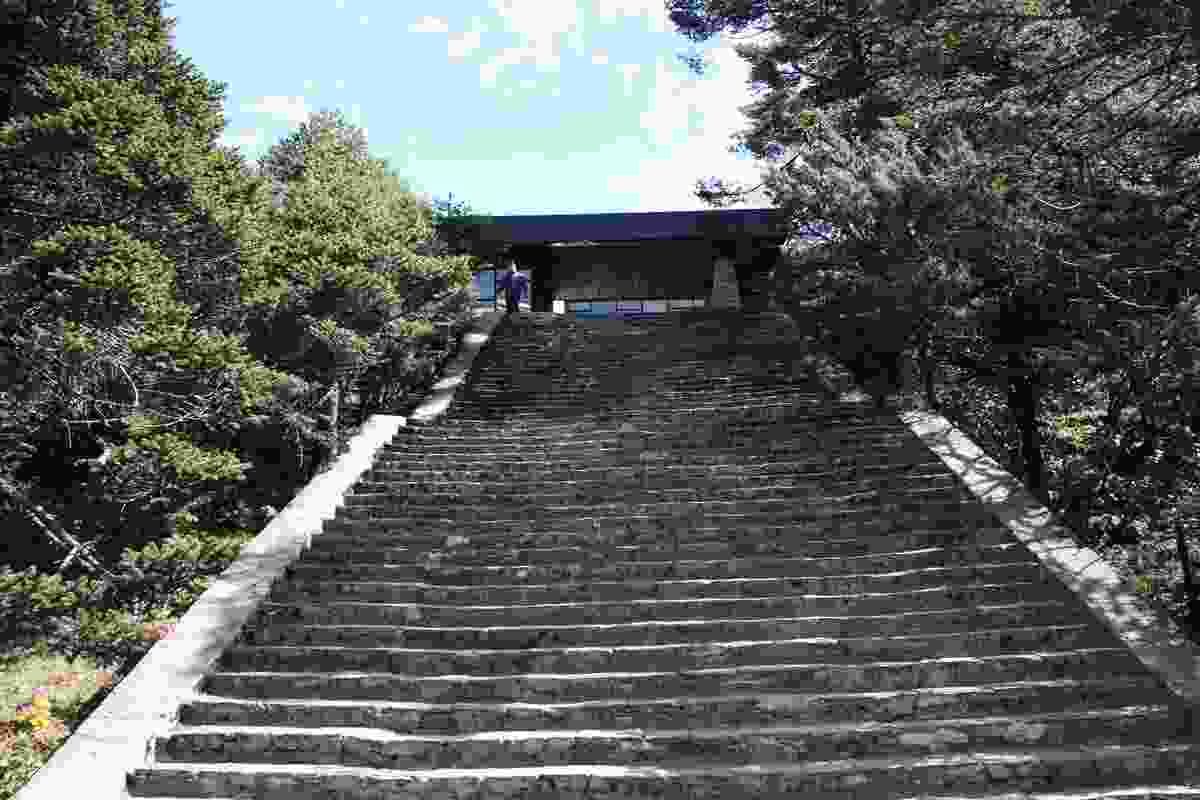 The grand stair that takes one up to the Hotel Everest View, Syangboche, Nepal. 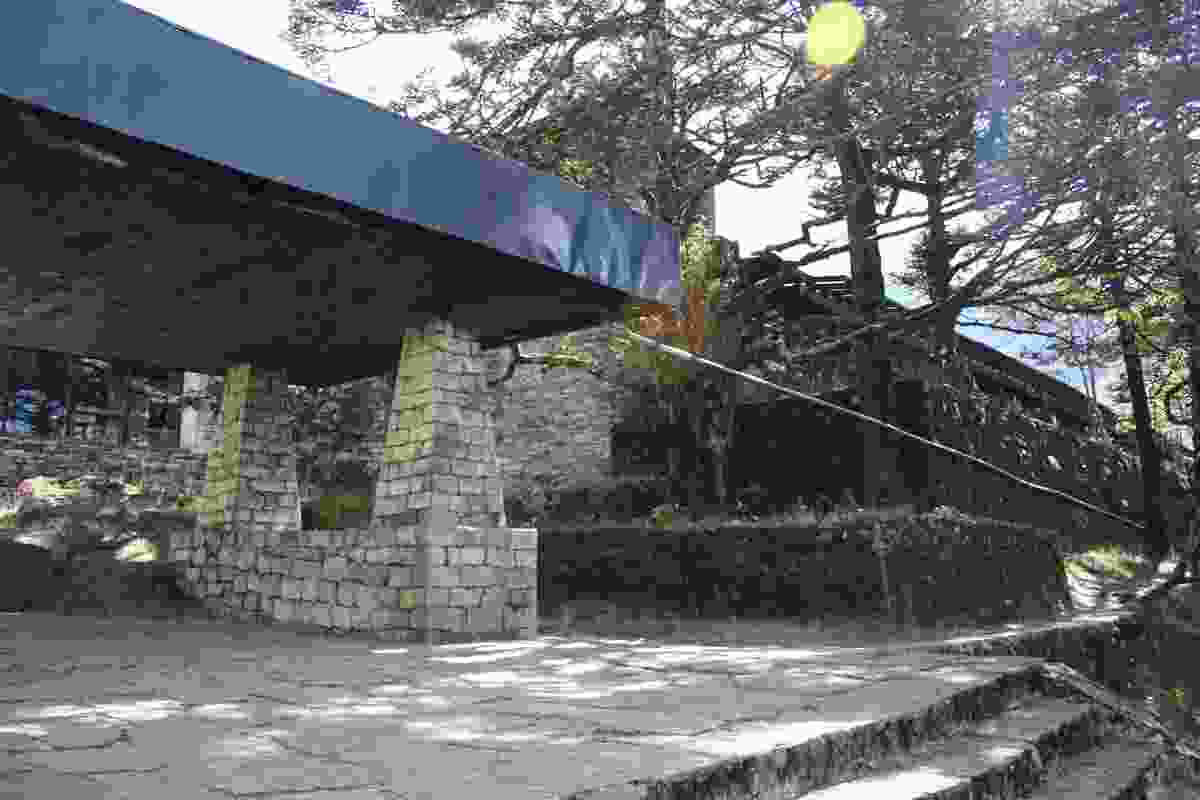 A low lying horizontal form in the spirit of Wright with flat roof, stone paved terrace and buttress-like columns. 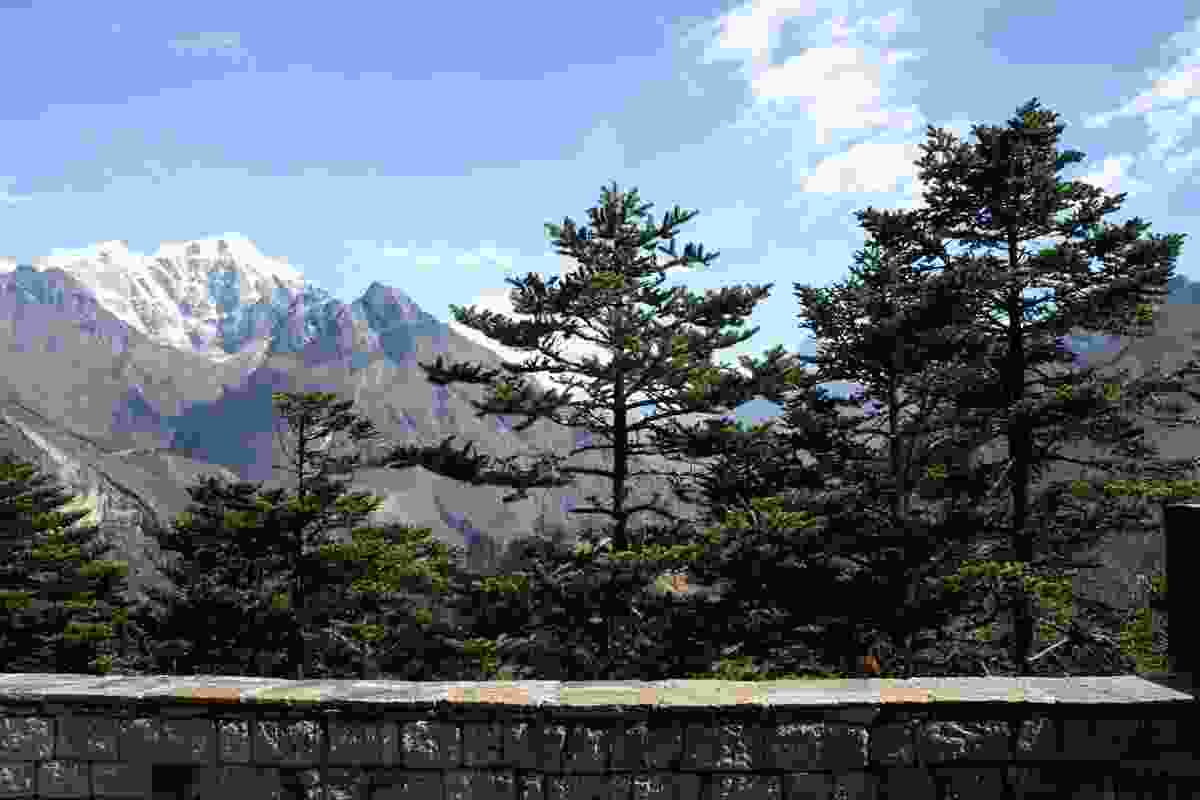 View from the terrace of the Hotel Everest View, Syangboche, Nepal. 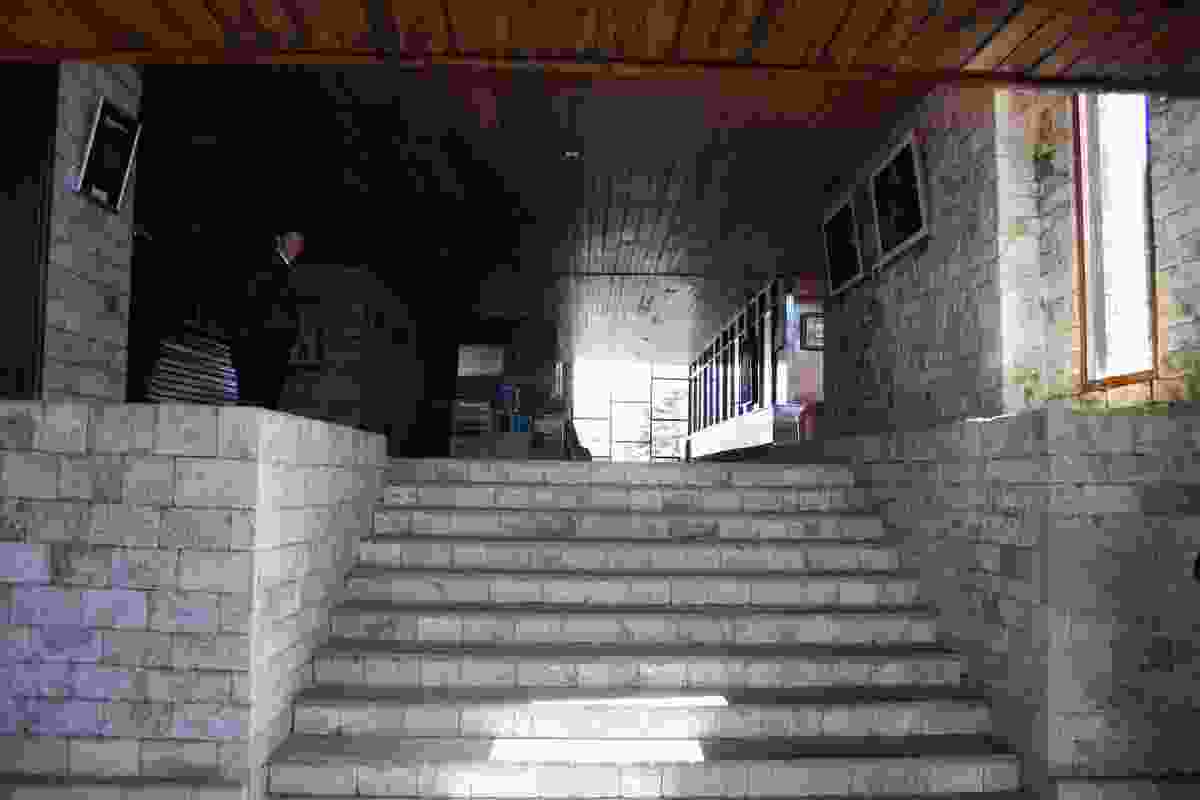 An easy spatial flow is achieved through the subtle interplay of half levels; a half flight of stairs takes guests up to the main building level. 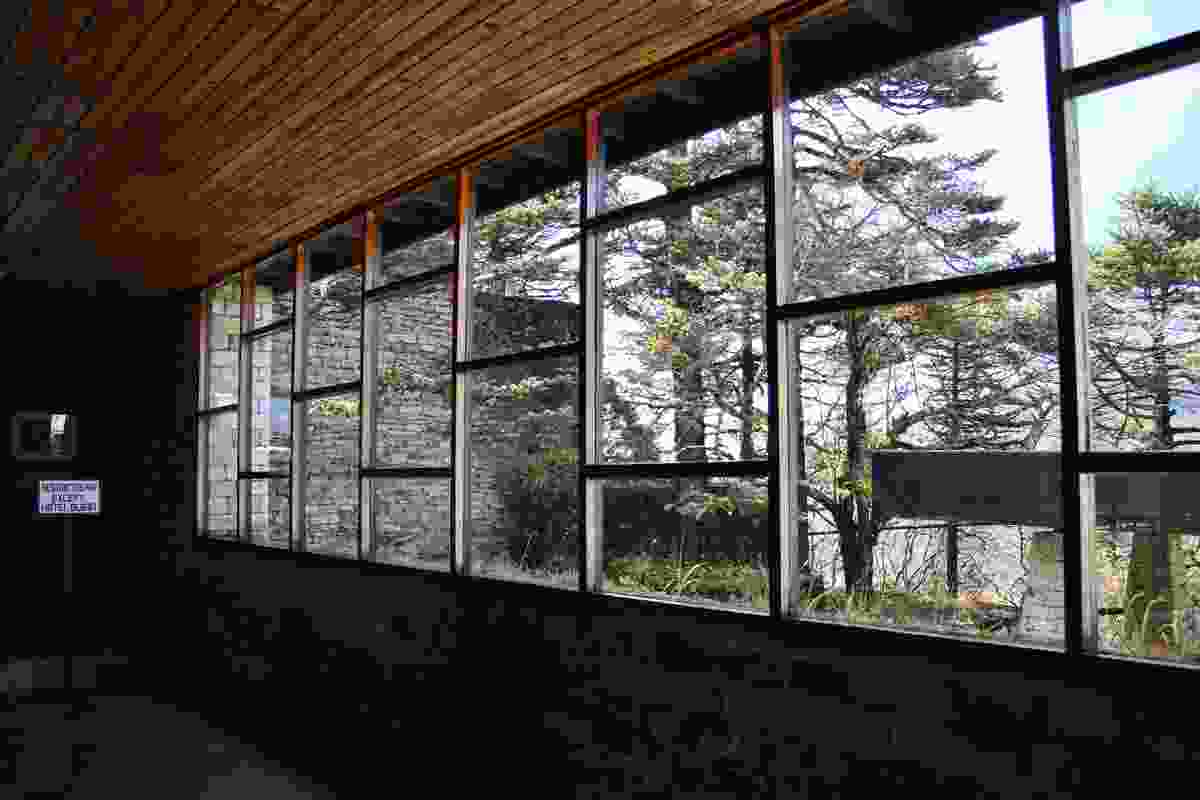 View of the well proportioned and timber framed picture windows. 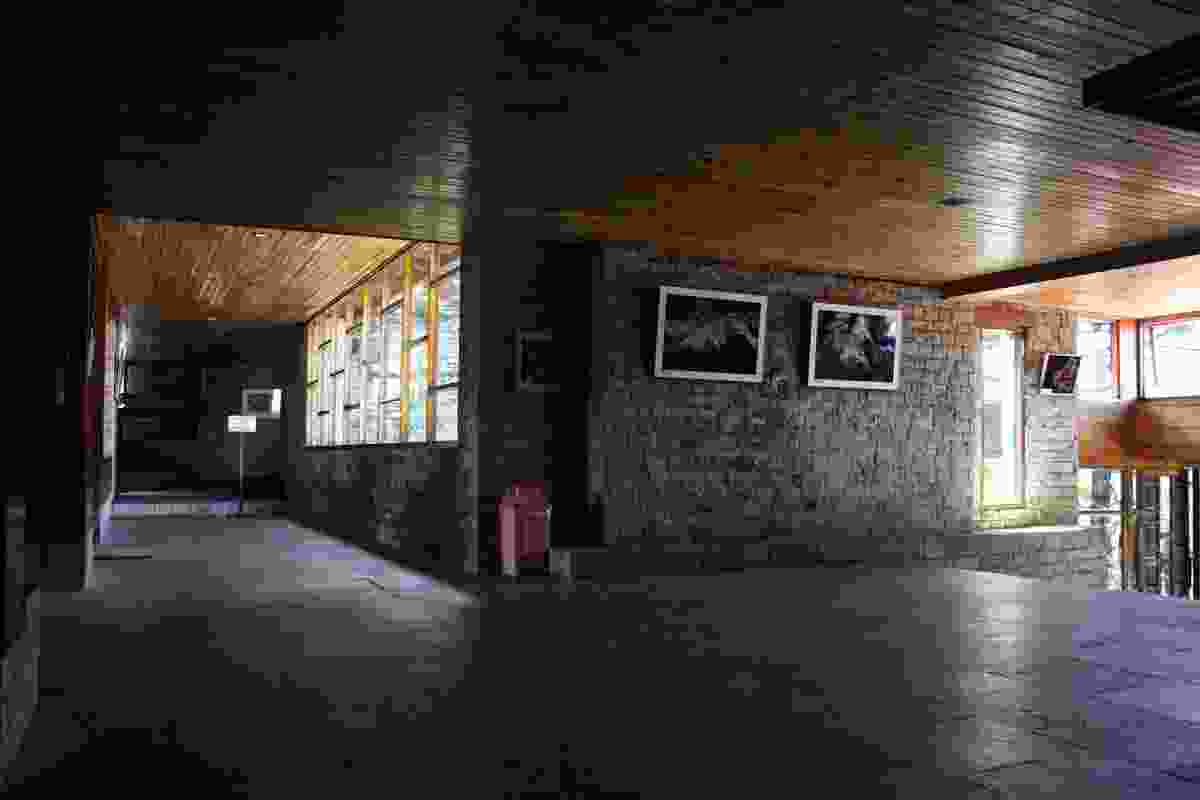 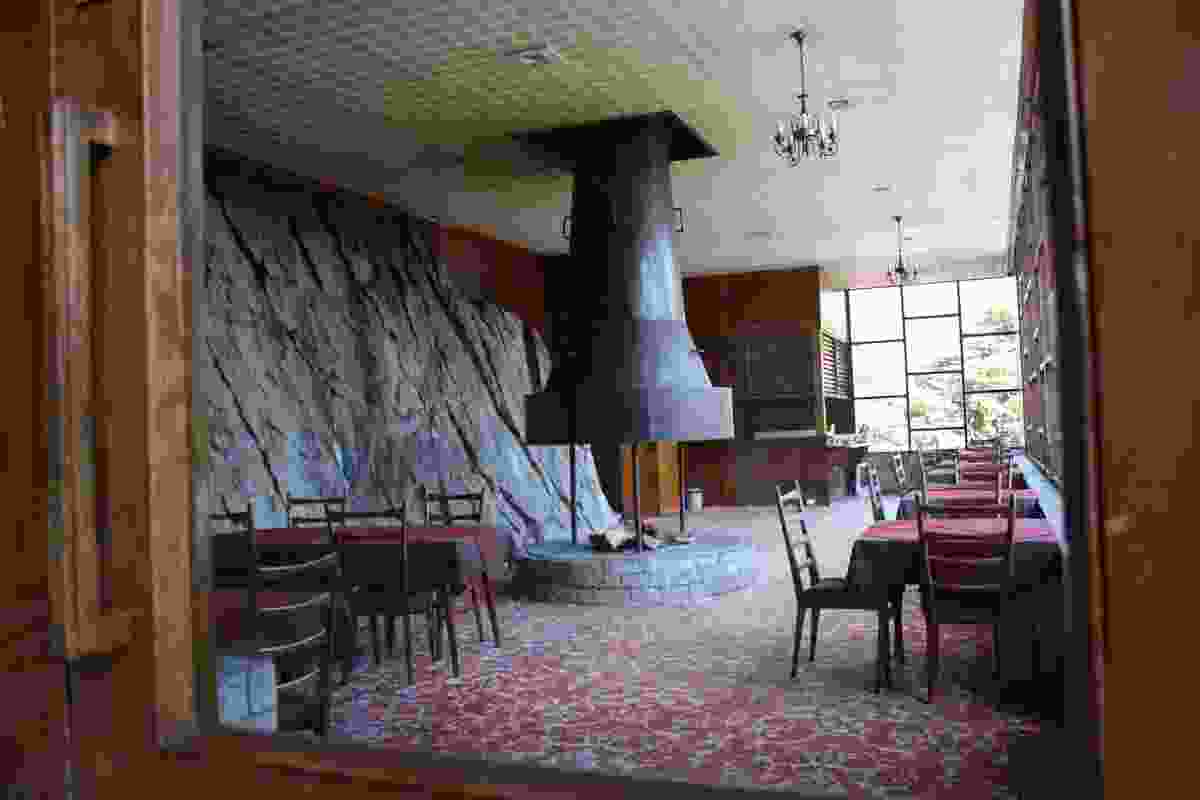 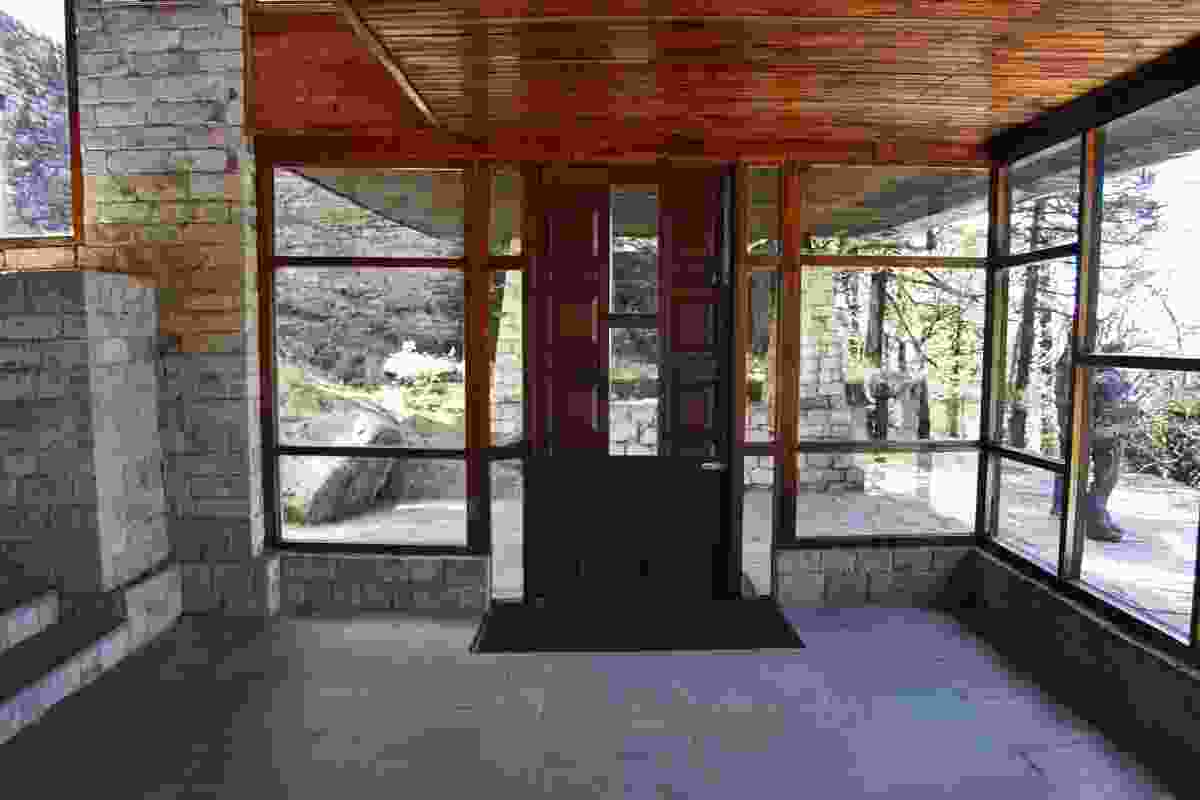 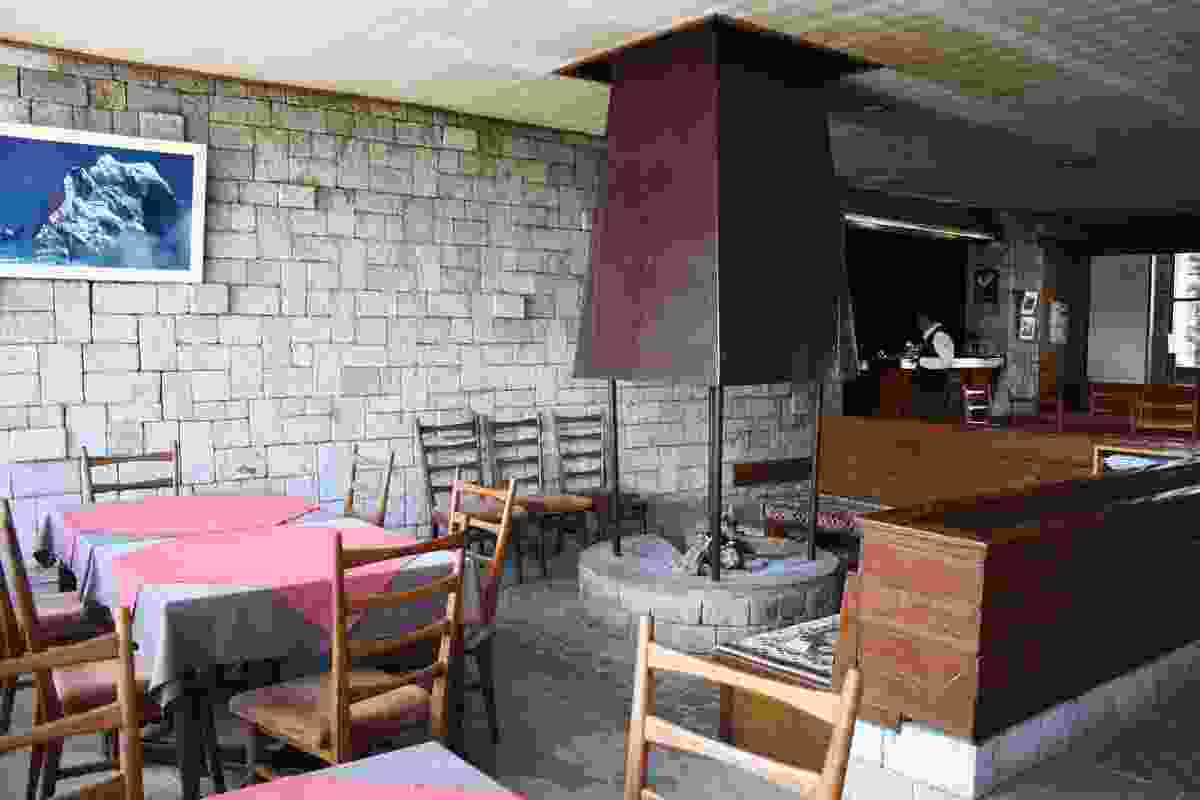 The casual dining and lounge areas feature dry–stone walls. The craftsman’s hand here may be described as “techne.” 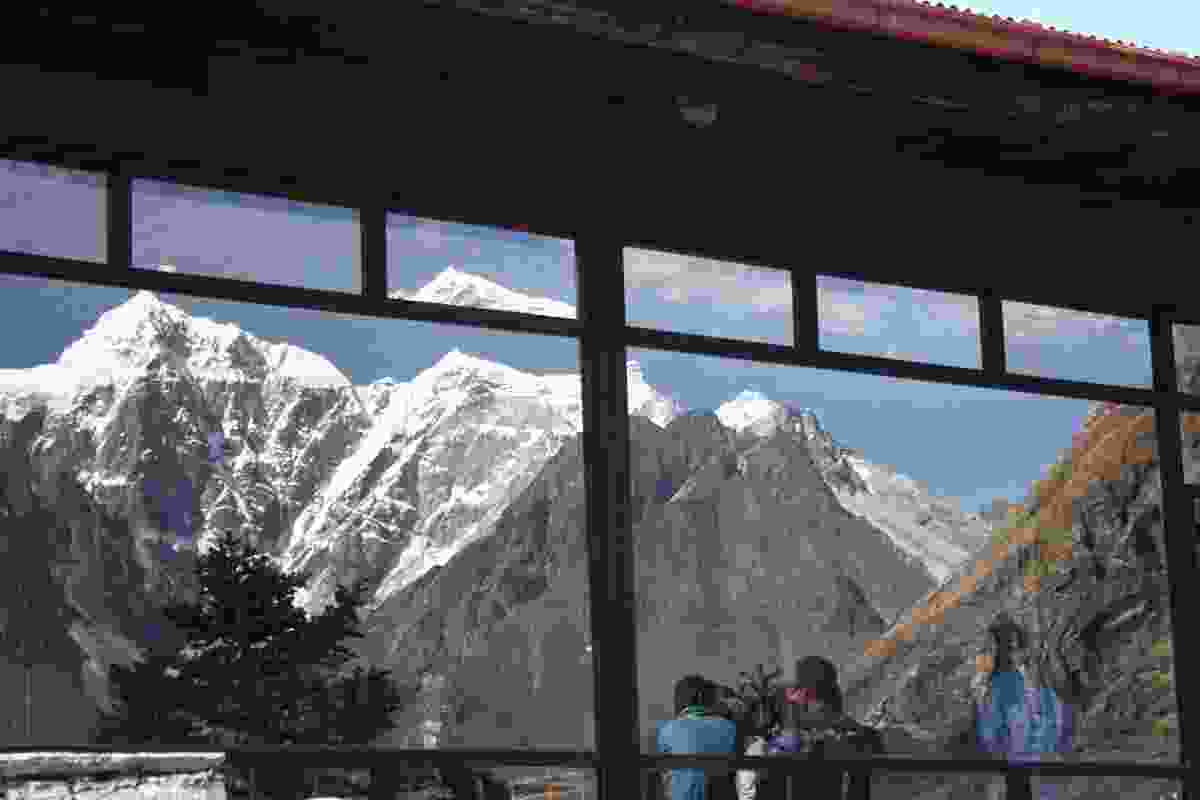 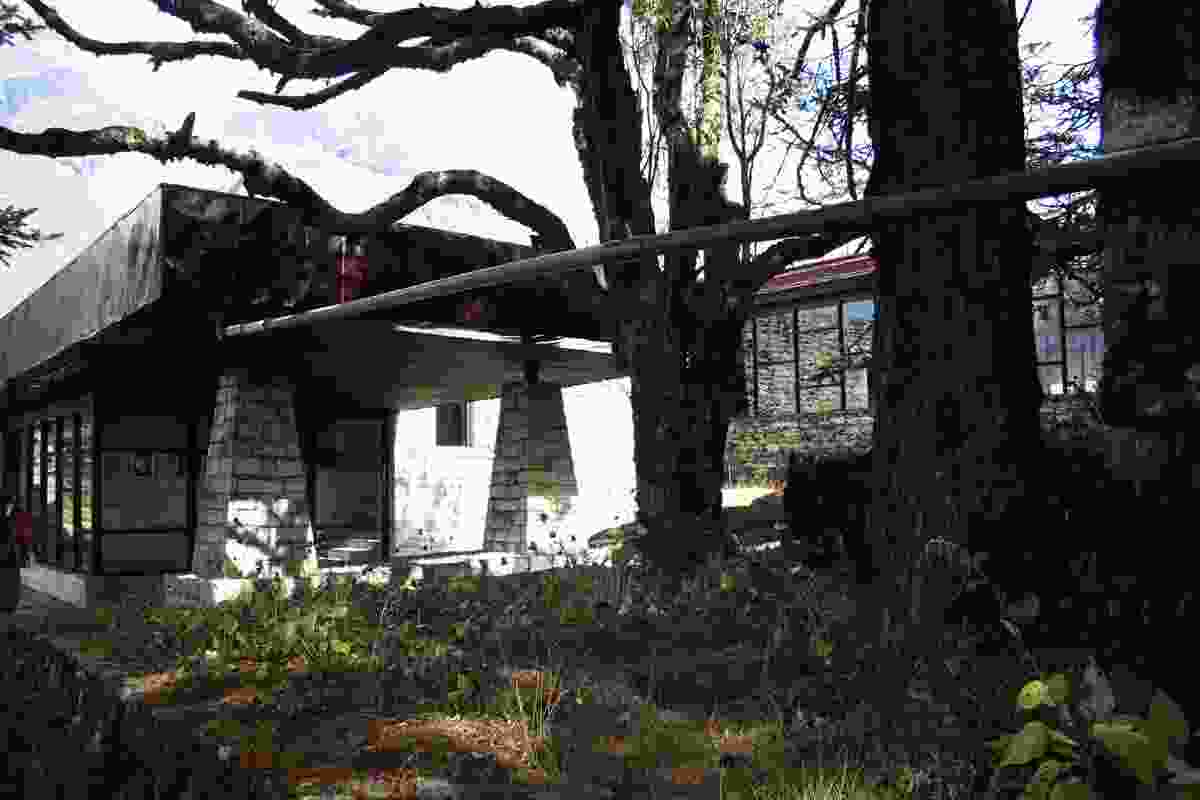 The Wright-like form of the Hotel Everest View. 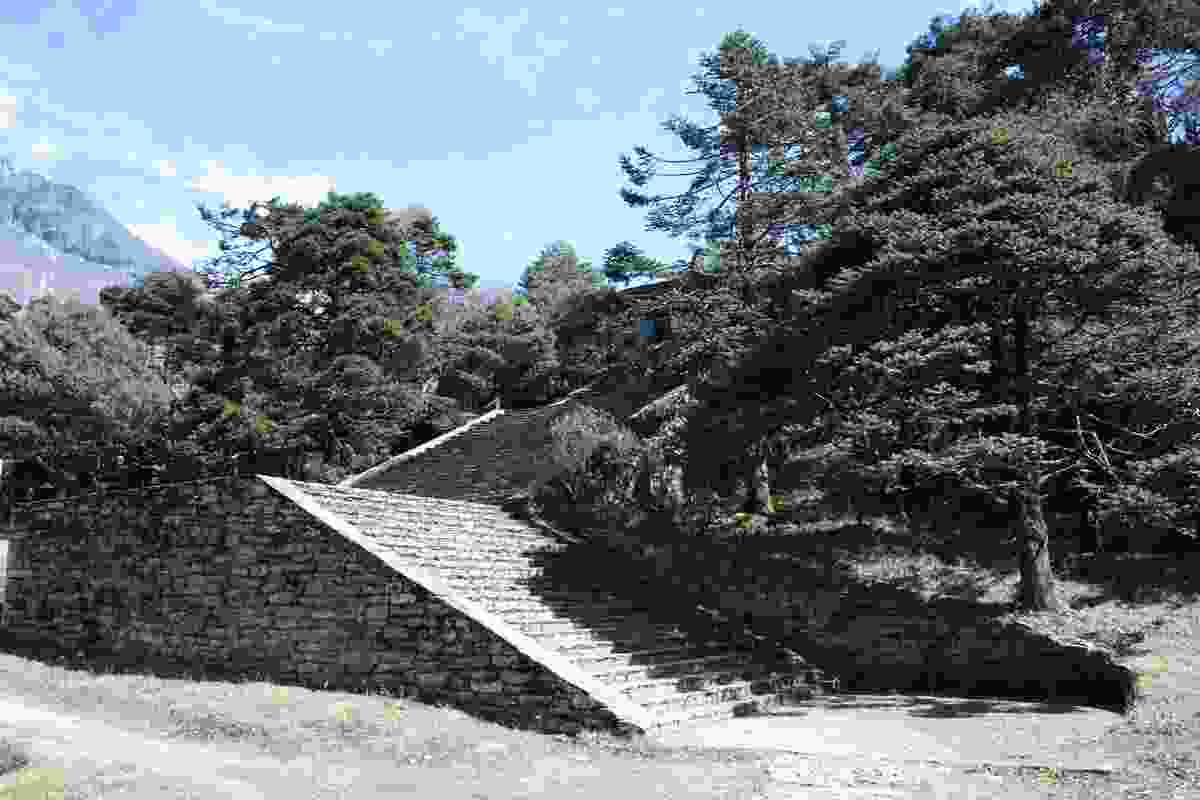 An Inca-like stone staircase leads to the Hotel Everest View. 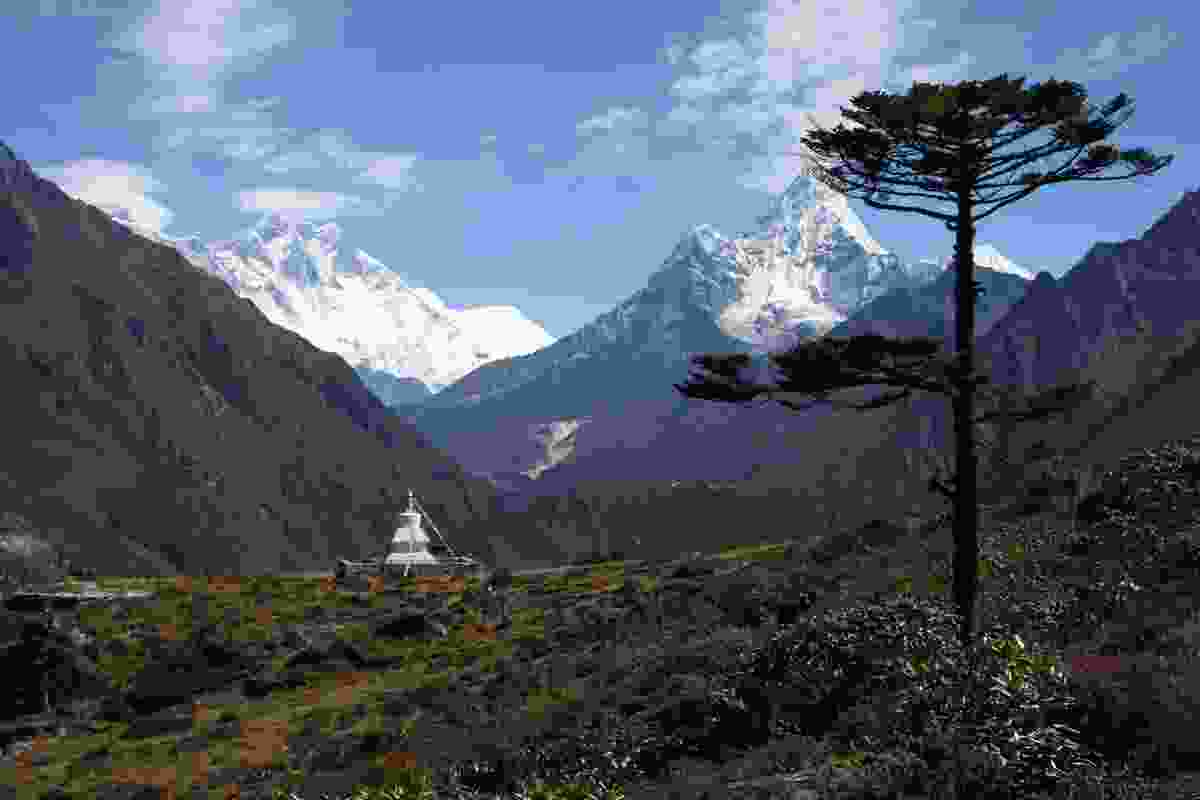 View of mighty Ama Dablam en route to the village of Khumjung after leaving the Hotel Everest View. 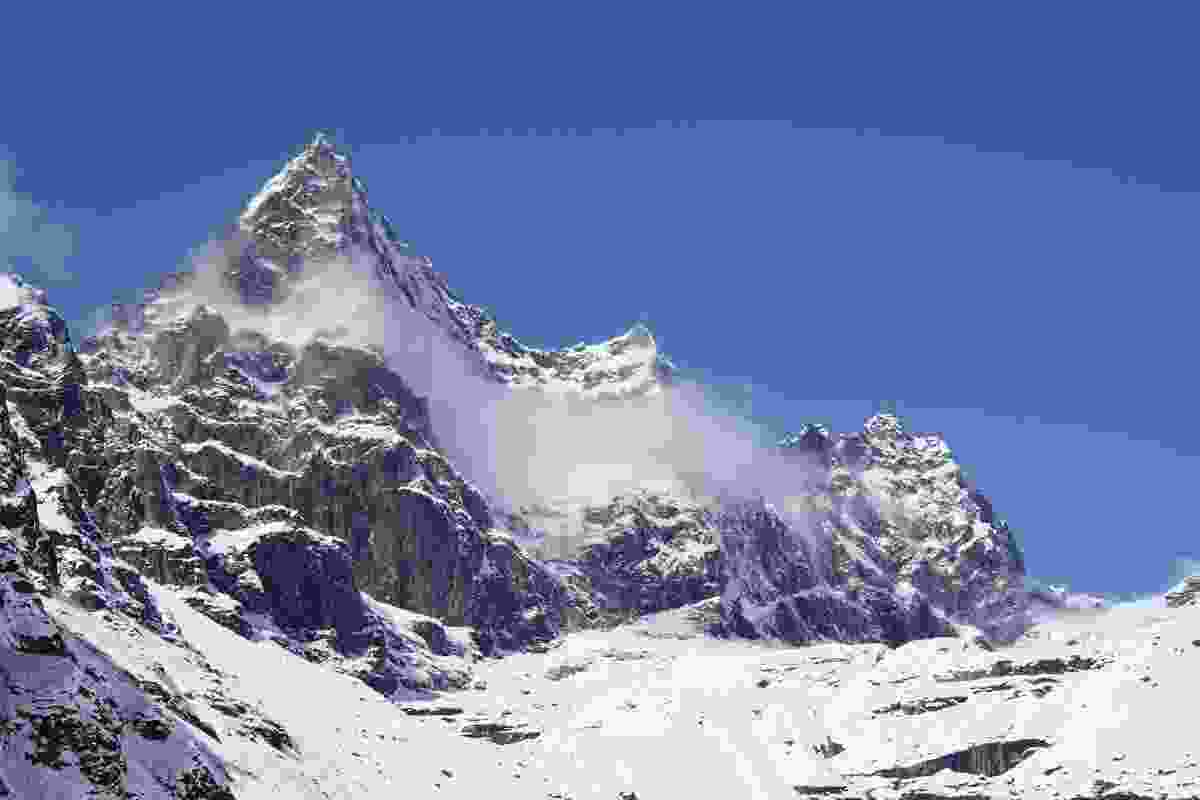 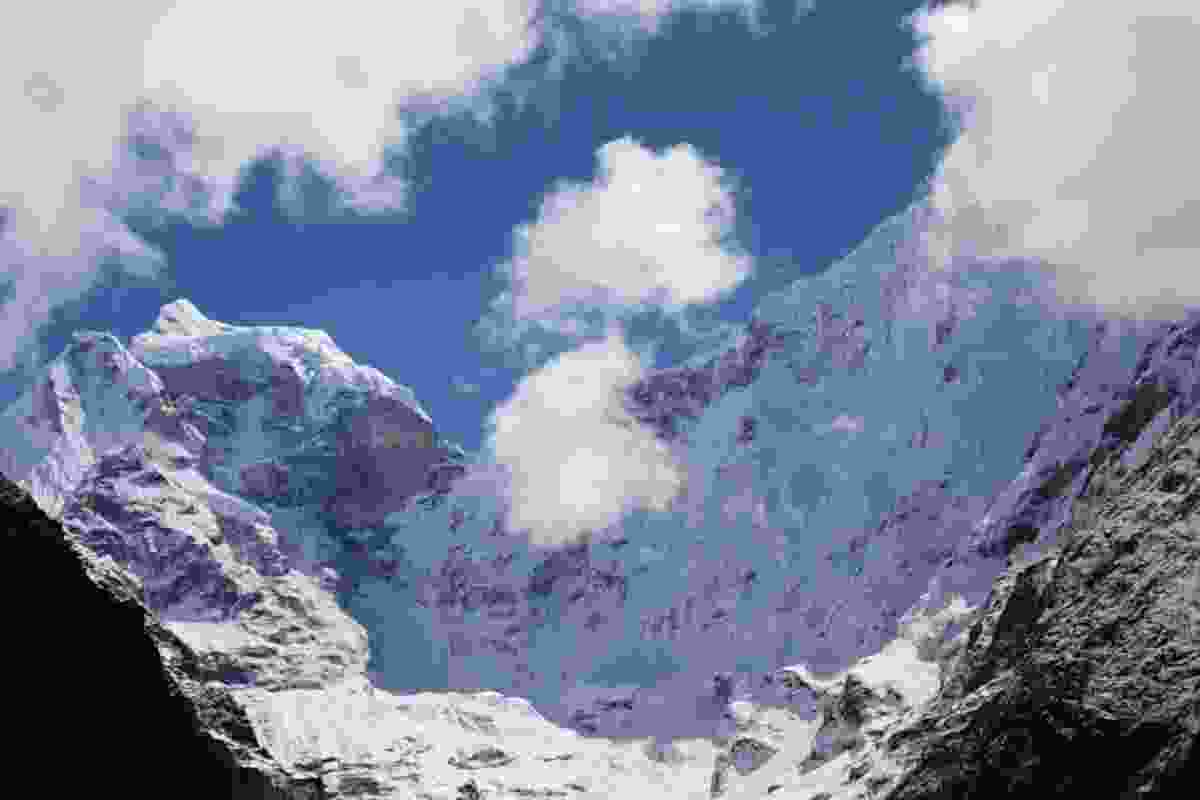 View of Thamserku from Tengboche Monastery. 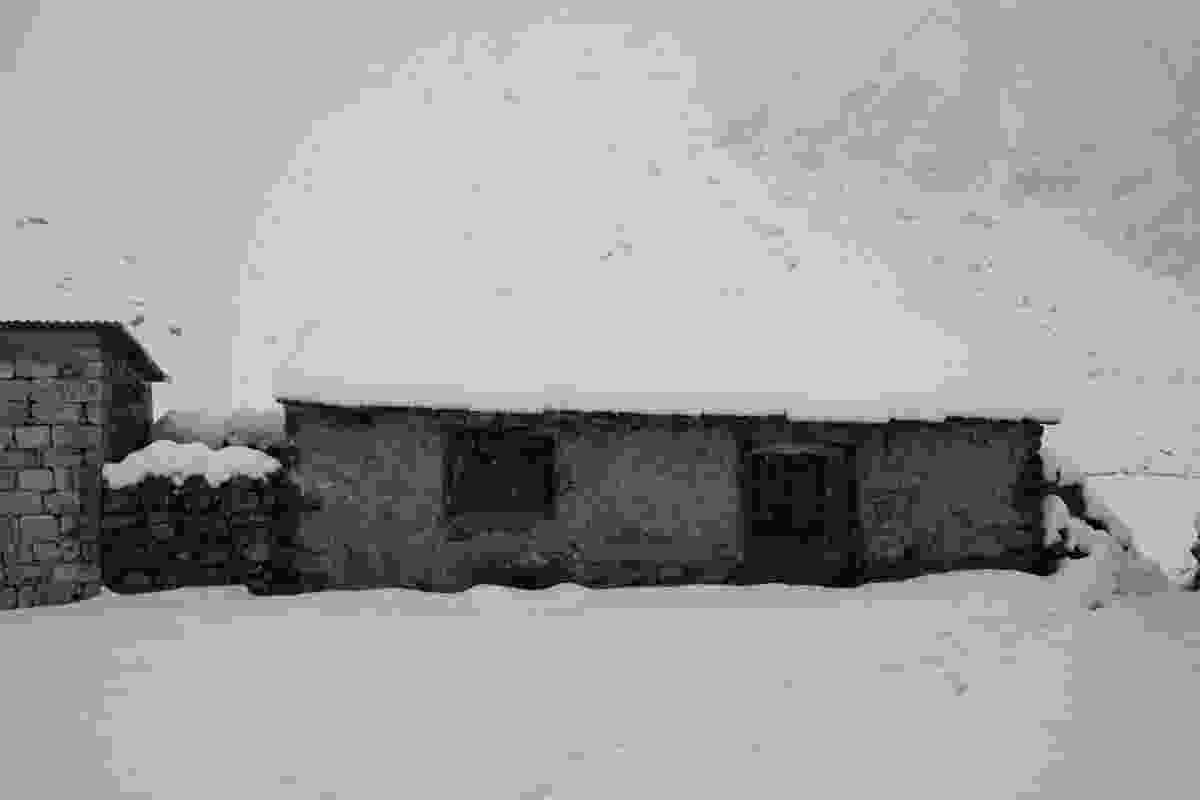