Despite starting a practice during the Global Financial Crisis, Philip Stejskal has, in the decade since, completed modest alterations and additions and elaborate new houses. Rachel Bernstone spoke to Stesjkal about his approach to residential architecture

Doing more with less is a fundamental goal of many young architects, but time, maturity and growth often blunt those early idealistic notions. In the case of Philip Stejskal, who took on his first solo project ten years ago, this characteristic could be a natural consequence of starting a practice just after the global financial crisis, but I suspect it is inherent to the architect himself.

After graduating from the University of Western Australia in 2001, Phil worked at a large firm in Perth and then Darwin before travelling overseas, then joining Coda in Fremantle. “[Coda founders] Kieran and Emma knew that I wanted to go out on my own and they made it possible by suggesting that I go part-time,” Phil says. Once the private jobs morphed into a fledgling practice, he launched Philip Stejskal Architecture (PSA) in 2011. His Fremantle-based team now includes Yang Yang Lee, Louise Allen and Julia Kiefer. Recently, the practice has expanded to include a Melbourne-based satellite studio, led by one of Phil’s long-time collaborators Claire Holmes.

The firm’s first project – Bellevue Terrace Alterations and Additions (see Houses 101) – won the national Australian Institute of Architects Award for Residential Architecture – Houses (Alterations and Additions) in 2014, an unusual feat for an emerging practice. On a small budget, the rear of the four-room cottage was reimagined by repositioning the bathroom along the southern wall, making way for a new indoor/outdoor room. Terraced steps down to the garden bridge the 1.5-metre height difference.

With a north-facing light scoop and operable shutters, the diminutive addition embodies Phil’s work in a perfectly formed nutshell. It’s modest and compact, in keeping with the worker’s cottage itself, but explodes the living experience with a “Queensland” style verandah. The project gives credence to the idea that small-scale projects can produce whimsical and joyful spaces.

“Regardless of the weather, the owners can pivot the panels to bring in light and air,” Phil says. “It was completed four years ago and they use that space all the time – all year round – by opening the glazed sliding doors that connect it to the kitchen. They can relax out there or entertain by bringing out a large table that fits across the room.”

I ask whether PSA would consider new work at this scale and Phil says they have several jobs underway with similar or smaller budgets. “We don’t turn down any projects,” he laughs. Of course, that’s a prudent business approach in a depressed market, but I think it speaks to his belief that every project – large or small – presents opportunities to explore the “bill of rights for human habitation,” as defined by Michael Sorkin in his book Local Code: The Constitution of a City at 42 Degrees North Latitude . Described as a “prescription for urban health,” the six rights comprise the right to space, sunlight, fresh air, privacy, community and tactility.

All of those rights were in short supply at South Terrace Alterations and Additions 2 in Fremantle, a single-fronted Victorian terrace that Phil reworked over four years, concluding in 2015. “We were forced to ‘gather’ light at a high level, using a roof form that reaches up with scoops and the roof terrace at the rear of the block,” he explains. “And we were able to carve out a north-facing courtyard with a day bed, and a main bedroom suite upstairs that provides access to the roof terrace.”

Phil reworked the plan and incorporated storage within circulation spaces to achieve better flow and connections to the new courtyard. The use of off-the-shelf materials, including lattice screens and Bunnings double-glazed windows, helped to reduce costs while addressing privacy, sun control and thermal comfort. Upstairs, the balcony floor is made of mesh grating that works in concert with clerestory windows to bring northern light deep into the block.

“The budget on this one was more generous, which allowed us to execute some spatial flourishes to get light, and to use brickwork instead of blockwork. The cabinetry was a big component, but it still has a certain economy to it,” Phil says. “We left many of the materials – like the concrete floors and ceilings – in their raw state.”

Having learned early on that working within tight constraints – whether site- or bu dget-related – encourages innovation to flourish, Phil admits that tackling a tabula rasa project can be daunting. PSA was engaged to design the front house of two at Calais Road in Wembley Downs, Perth, a subdivided block for three generations of one family. The new two-level house occupies the footprint of the original home and is surrounded by the existing terraced garden. Appearing single-storey from the street, it offers the opportunity to age in place with a main suite on the ground floor.

Taking its cues from the suburb’s mid-century modern origins, the design borrows that era’s massing and materials with a stone blade wall that defines the entry sequence and continues inside. Several recesses are carved into the solid form to introduce light and connect with the garden on both levels. Obviously it feels different from the earlier Fremantle projects, but there are similarities too, such as the use of timber battens for privacy and sun control.

PSA’s latest project – the Blinco Street House in Fremantle, completed in 2017 – was commissioned by an offshore shiftworker. He wanted a home that was grounded and private, allowing him to retreat and decompress after weeks away before re-entering the world. The entry sequence responds to that brief with a dark, secluded moment of pause before the front door, which opens to a circular entry hall.

This “library” space of books and objects prompts the owner to reconnect with his “shore life.” It leads to a combined kitchen/living/dining area, with high ceilings and windows, which opens to a garden that will become a lush outdoor room over time. Upstairs, three bedrooms and a bathroom are shielded from the street by a fully operable lattice facade, with screens that tilt in and out for sun control and privacy, allowing the owner to re-engage on his own terms.

The interior material palette is restrained, although it features slightly more elaborate finishes than earlier projects, such as glazed bricks in the splashback and Paperock benchtops. “We spent some extra money on materials and the intricacies to set up that play between public and private, and between the dark and grounded lower floor and the lighter second floor and roof terrace,” Phil says.

While he enjoys designing bespoke houses, and this one is a triumph, Phil is equally concerned with adapting and improving mass housing. In a bid to make architecture more accessible, he’s working on a series of plug-in modules that address fundamental design deficiencies in the vast majority of houses.

“We were working from the premise that 80 percent of housing stock, half of which is facing the wrong way and has no access to northern light, could be improved using a modular system that is tailored to the almost universal specifics of the ubiquitous project home,” he says. “It’s a way of affordably improving the sustainability and spatial amenity of existing houses.”

For this architect, the idea that everyone should have access to a certain standard of sustainability and wellbeing at home, regardless of their budget or means, is a strong motivating force. And that desire to pursue spatial romance and delight – for everyone, not just a select few – seems likely to intensify over time rather than diminish. 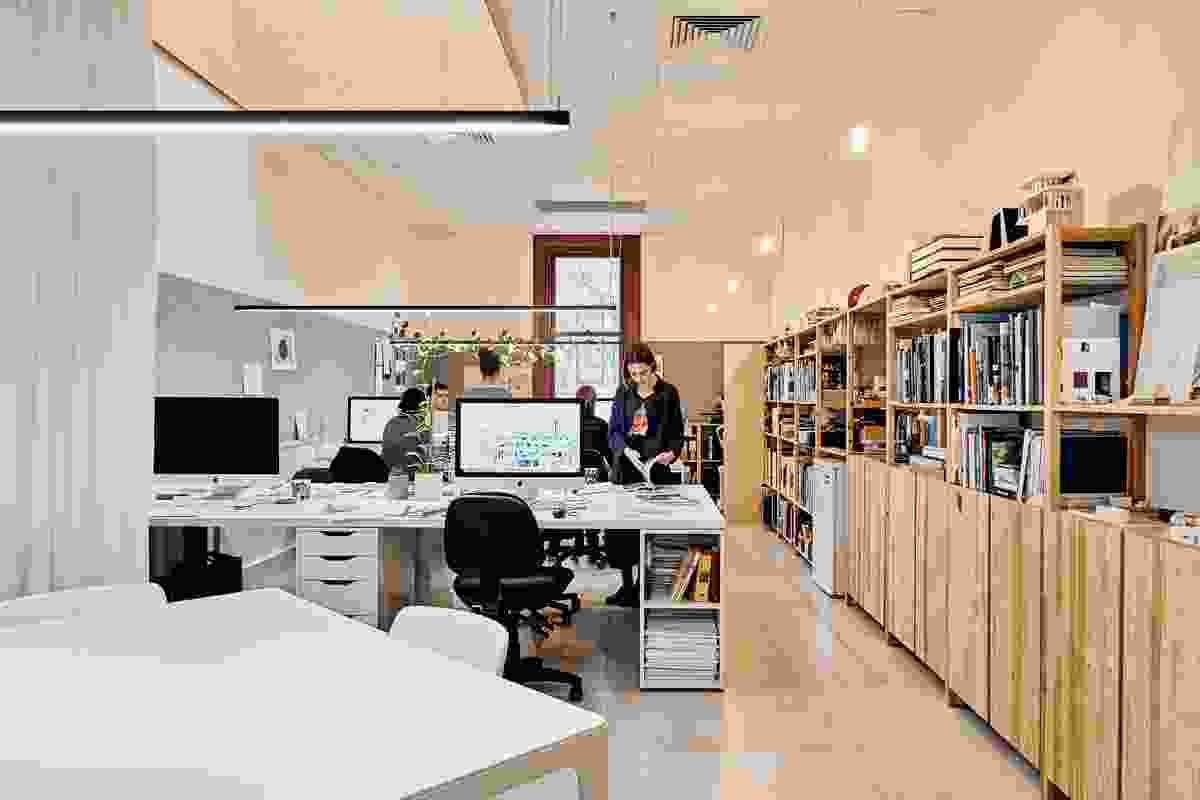 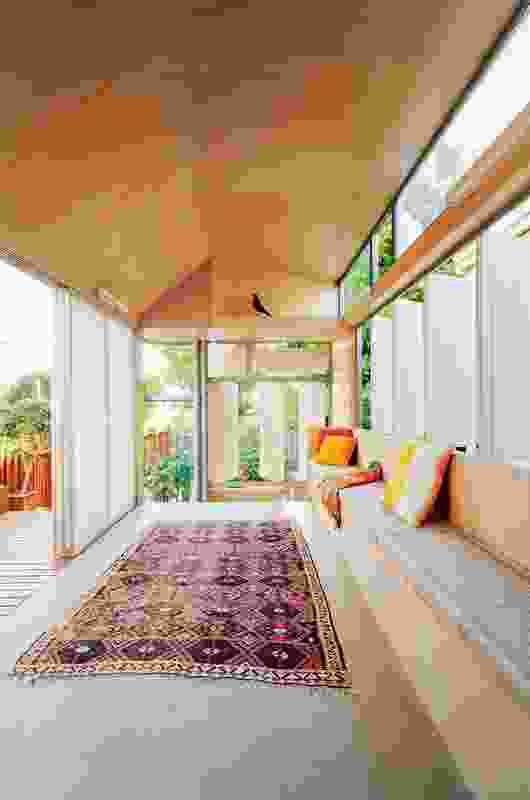 Bellevue Terrace Alterations and Additions in Fremantle (2013) involved the clever addition of a new indoor/outdoor room on a small budget. 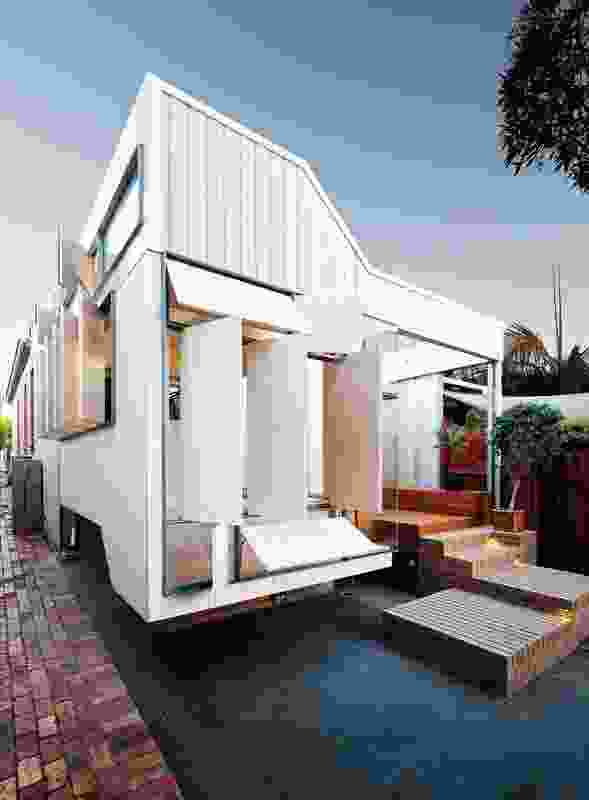 Artfully arranged terraced steps lead from the Bellevue Terrace addition down to the garden 1.5 metres below. 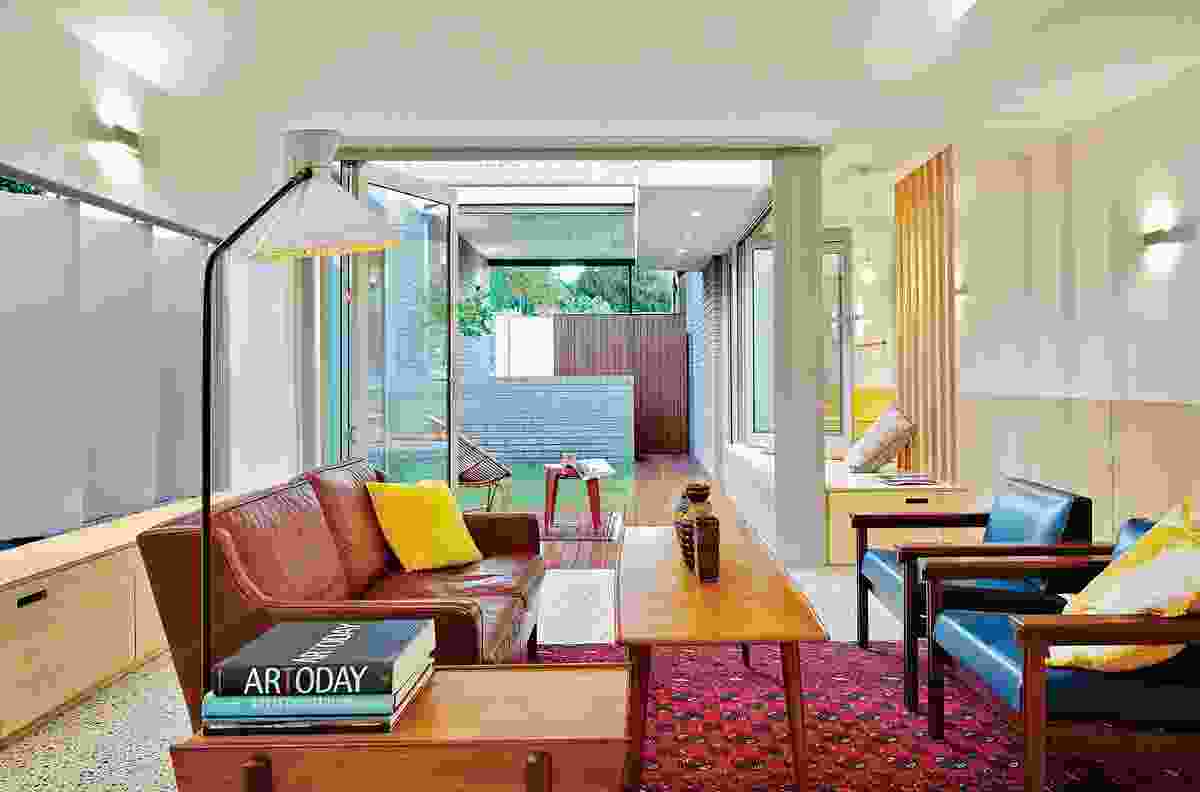 For South Terrace Alterations and Additions 2 (2015), the architects brought in light by carving out a north-facing courtyard. 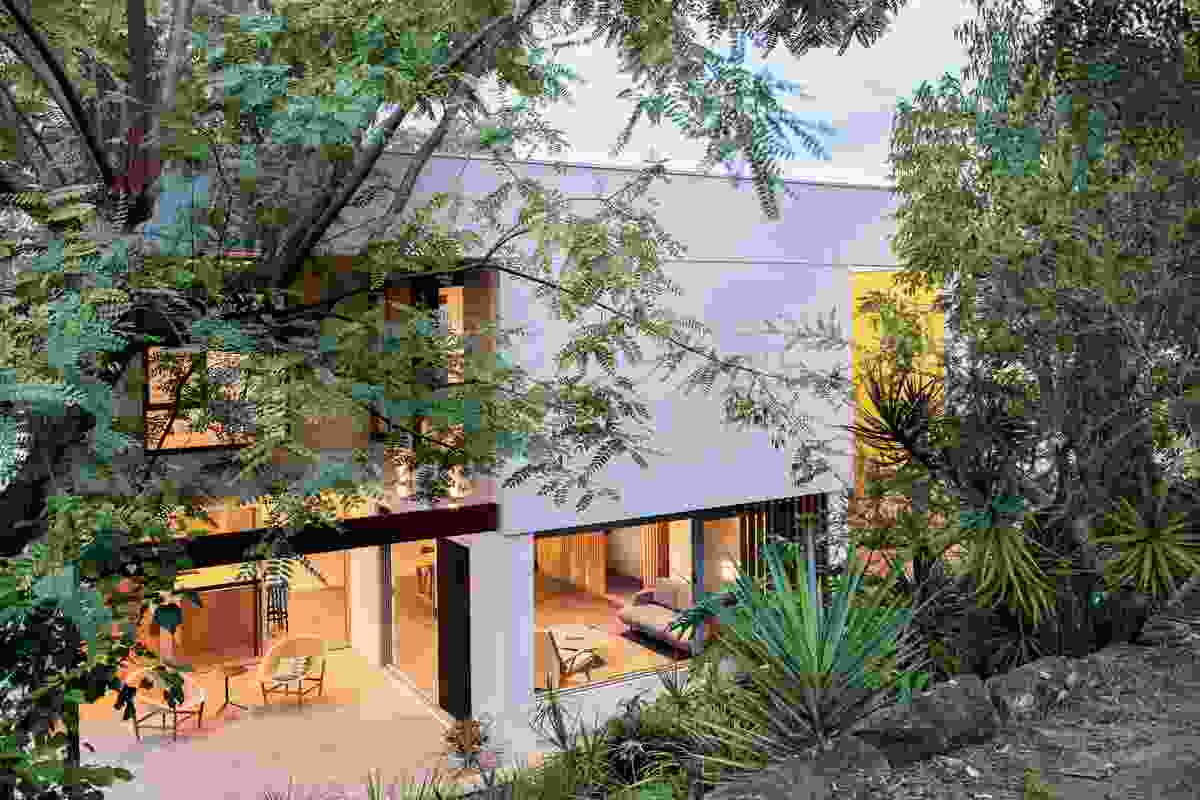 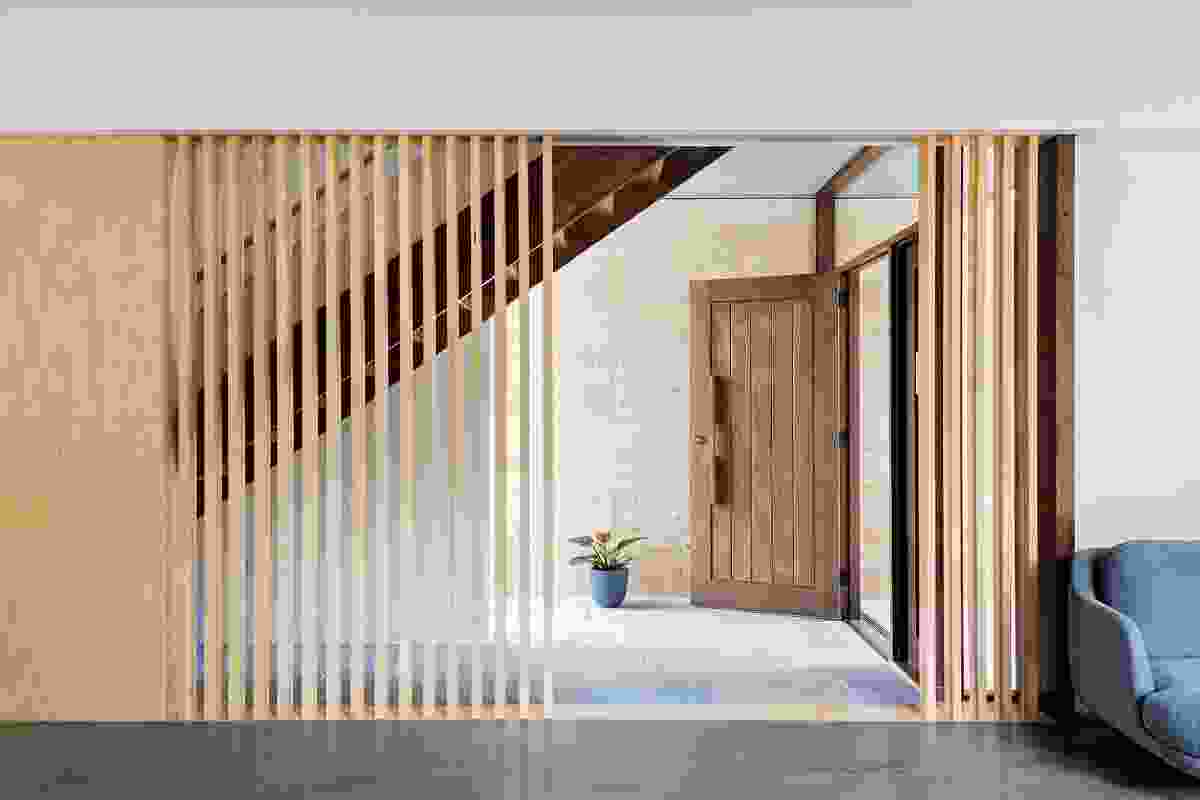 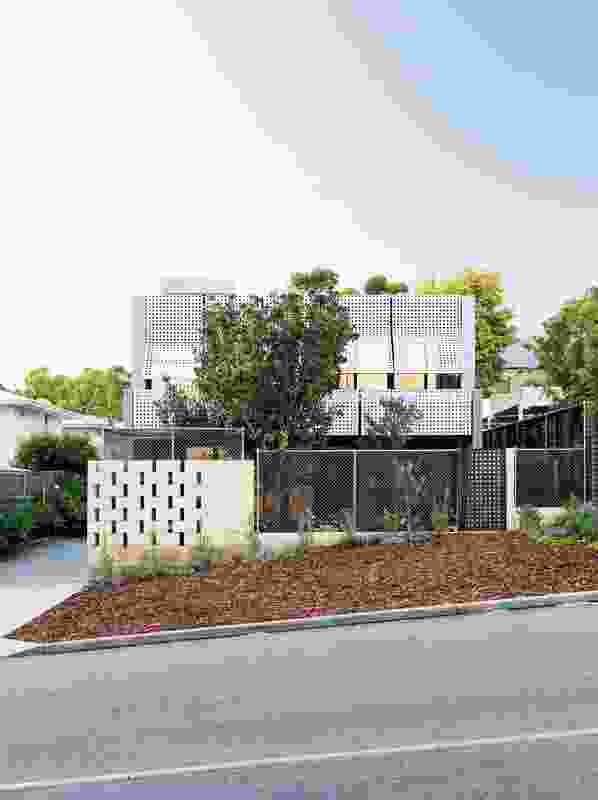 The upstairs rooms of Blinco Street House (2017) are shielded from the street by an operable lattice facade. 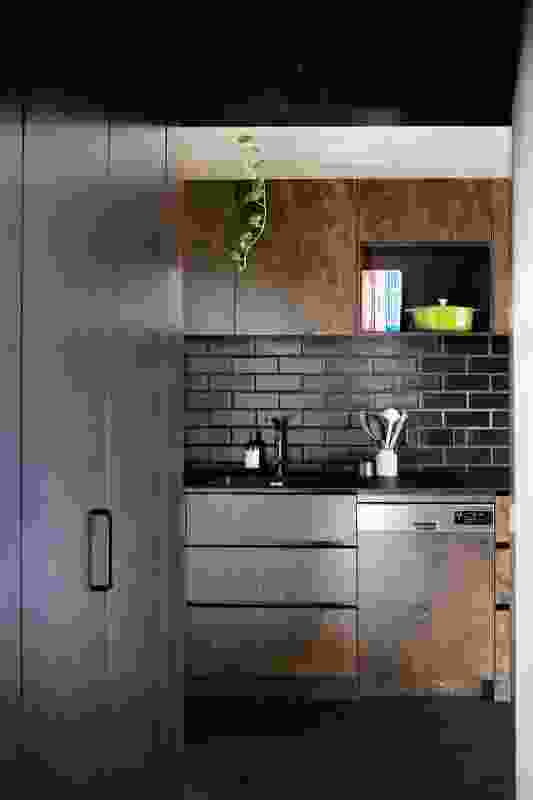 Blinco Street House features more elaborate finishes than earlier projects, such as glazed bricks in the splashback and Paperock benchtops. 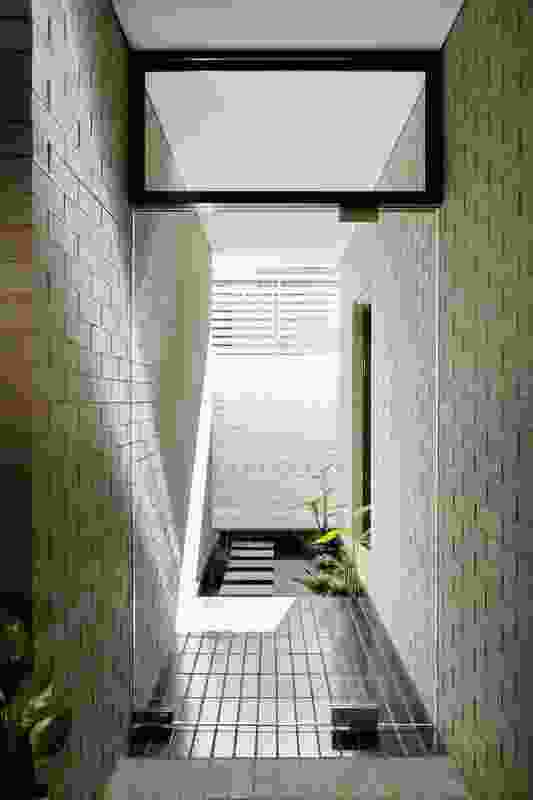 An internal pond contributes to a dark, secluded moment in the entry sequence at Blinco Street House. 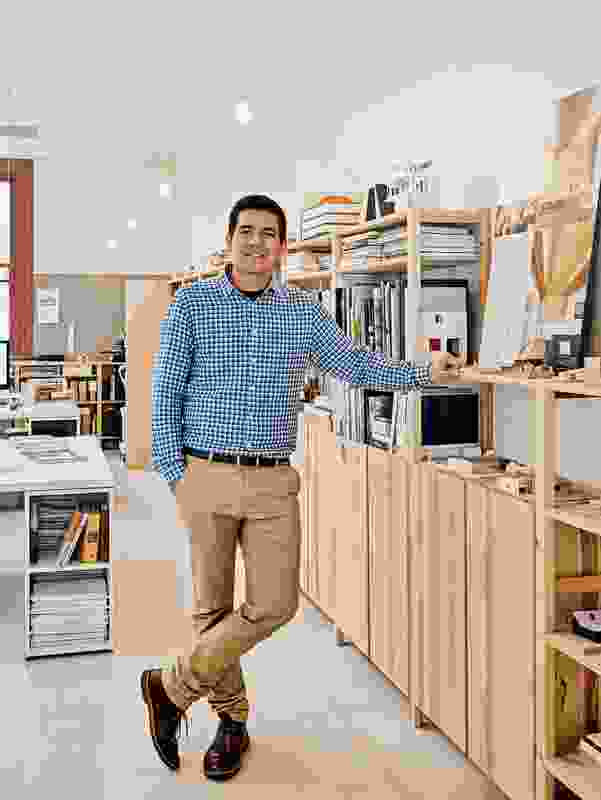