This characterful addition to a beach shack in a former coal mining village in New South Wales, by Barnacle Studio, speaks to its historical narrative and neighbouring ancient landform.

Rather than demolish the original cottage, the designers and their clients opted to refresh it with an extension that addresses the street and landscape.

Coledale, north of Wollongong, is a small seaside town and historic coal mining village that occupies a narrow stretch of land between the Illawarra Escarpment and the Tasman Sea. Prior to more recent development, the town’s houses were predominantly fishermen and miners’ shacks and holiday cottages – “small, single-storey, cobbled together and home built,” says Morgen Figgis, who co-founded Barnacle Studio with Mignon Steele. As the area has become more urbanized, the older houses have been renovated or rebuilt, and often doubled in height and footprint. “The expectation of what people want in their homes is now incompatible with the old building stock here,” Morgen explains.

Piz House – named after its owners, Pete and Isabel – represents a conscious departure from this norm. The couple, who have two young children, purchased the original two-bedroom cottage as a means to downsize. They wanted a more contained home, to live with less and to have the natural environment at their doorstep. The fact that very little had been done to the cottage was also of great appeal; one room, like a “caravan annex,” had been added and the porch closed in. Pete and Isabel engaged long-time friends Morgen and Mignon, to refresh the cottage and to create a north-facing, front extension that would address the landscape and the street.

The addition houses a sunroom, kitchen and dining area. Formally, it’s simple: a skillion-roofed rectangular volume that projects outward from the cottage, hovering above the land (and the nascent garden). “It’s like a ship and the garden will become like the sea,” says Morgen. He had imagined the former owner – a “real character” in Coledale – as a sailor, who would watch the fishing boats come in. “In some way you make up a narrative that allows you to get into the creative process,” Morgen says.

Constructed with prefabricated wall and roof panels, the addition is positioned on the eastern side of the property for views of the steep escarpment to the north-west. Windows slice through the building and rise to a peak in its northernmost corner, mimicking the shape of the landform, the pitch of the roof and the slope of the street. A fibreglass awning, propped on angled poles, extends above the windows and also lifts in the corner to accentuate the building’s form and composition. The striking fenestration is both functional and decorative. Operable windows are placed high and low for ventilation; painted timber panels and patterned glass provide variation and privacy; and larger fixed windows offer views of the distance rather than foreground. Louvre windows on the east and west allow for cross ventilation and a large sliding glass door opens the room to the deck and courtyard.

Inside, a long sofa sits beneath the northern windows, where it is bathed in natural light, while the raised floor affords it privacy from the street and passers-by. In the same space, a dual-colour tiled splashback mediates the transition between the material palette of the light-filled sunroom and the kitchen’s darker joinery. Triangular details occur as a motif throughout the room and are used as a solution to joinery and lighting elements, including the drawer pulls, shelving and island supports, as well as the vintage pendant above the dining table.

The exterior is clad with pale green vertical boards, a subtle variation to the light cream horizontal boards on the original cottage. Mignon selected the colour to highlight the form of the addition, and as a respectful contrast to the landscape. “We didn’t want it to be too eye-catching, but wanted it to be fun and lively,” she says. The same colour scheme continues inside, together with flourishes of coral for a relaxed, beach cottage vibe.

Having removed the annex, Morgen and Mignon reconfigured the original house around a central hallway that leads to the backyard from the entry. The compact cottage comfortably accommodates two bedrooms, a family room, studio, bathroom andlaundry. Wide, double-door openings increase the sense of space in each room, as if borrowing from the hallway and adjacent spaces.

The interior is an idiosyncratic collection of original, found, recycled, second hand, new and custom-designed pieces. “We were trying to reinvigorate that old character of the beach shack so that it speaks to the historical narrative of the house, but doesn’t get weighed down by it,” says Morgen. Each door is different and the flooring varies throughout: original floorboards, sanded-back parquetry and coralcoloured concrete. “For some people, the different floors would be intolerable,” says Mignon. “We calmed everything else down so that they became the texture to work with.” The effect is quirky and playful yet coherent. It reflects the personality and style of Pete and Isabel, and it is fun and robust for the kids.

“It’s a nice case study in how to deal with a small, old shack without having to knock it down,” Morgen says. “And the addition makes a positive contribution to the built environment and community.” 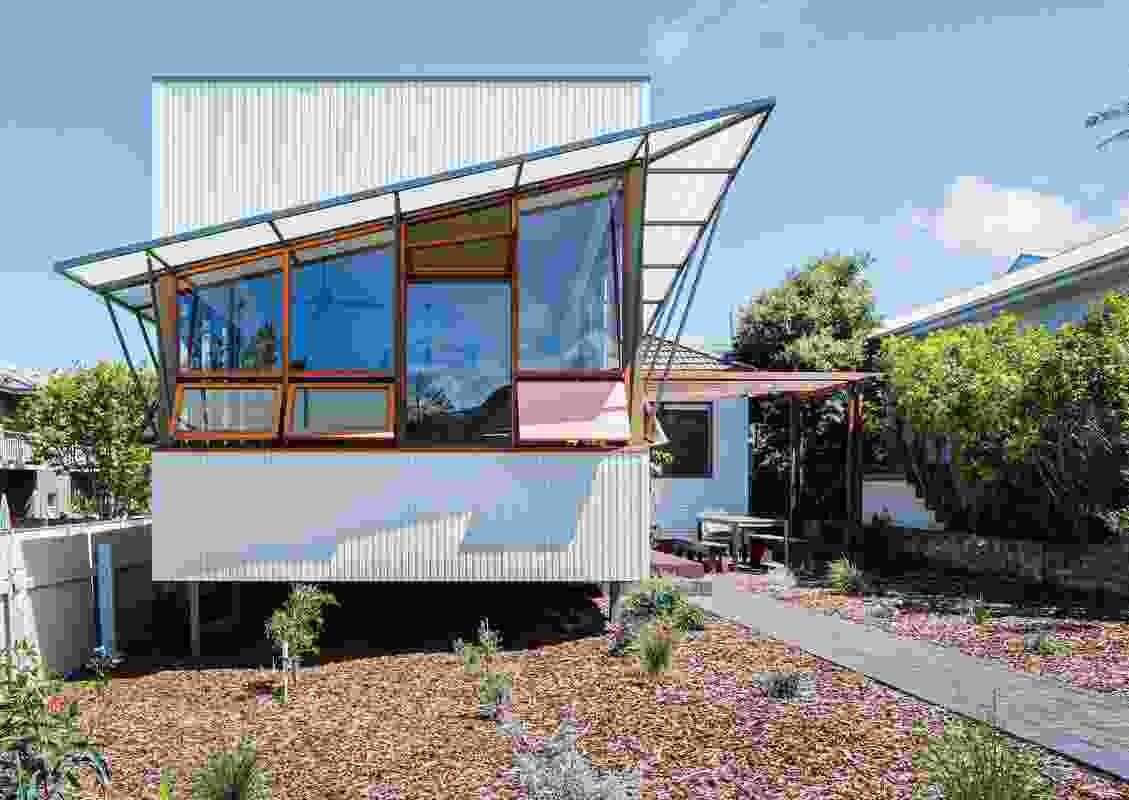 Rather than demolish the original cottage, the designers and their clients opted to refresh it with an extension that addresses the street and landscape. 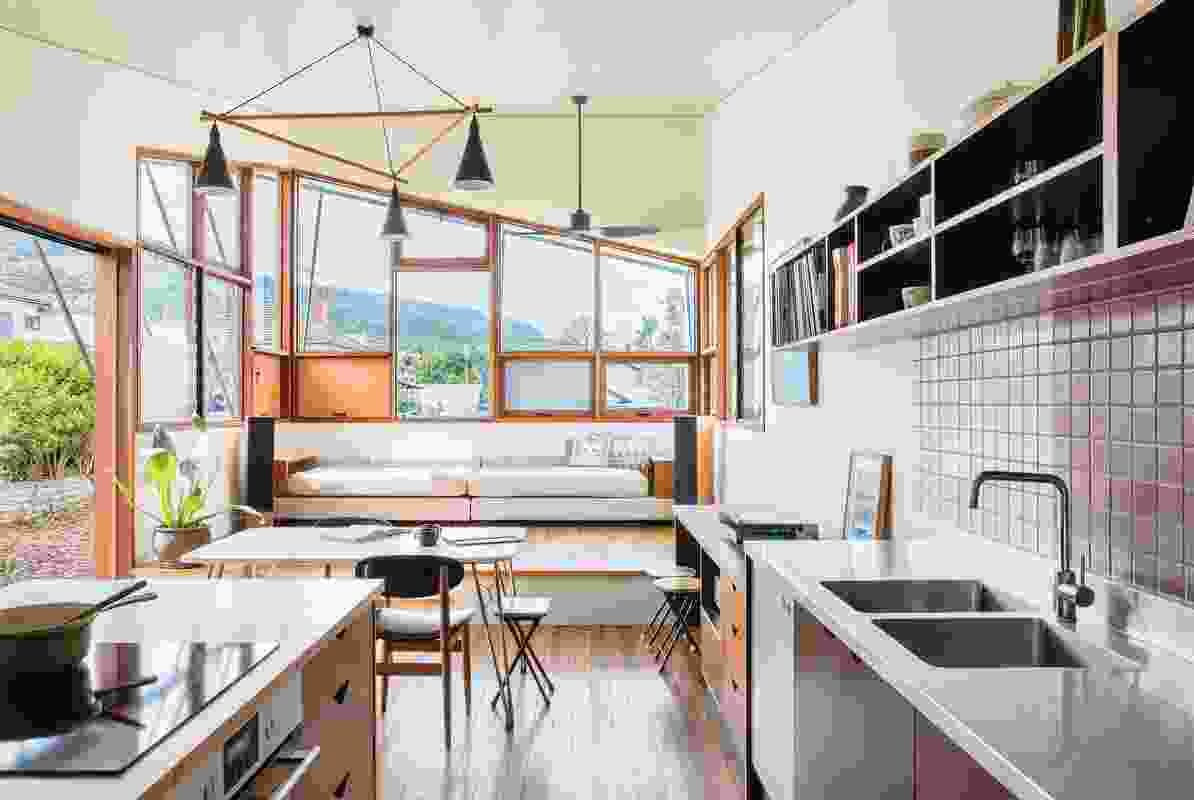 Functional and decorative windows rise to a peak, mimicking the shape of the steep escarpment to the north-west. 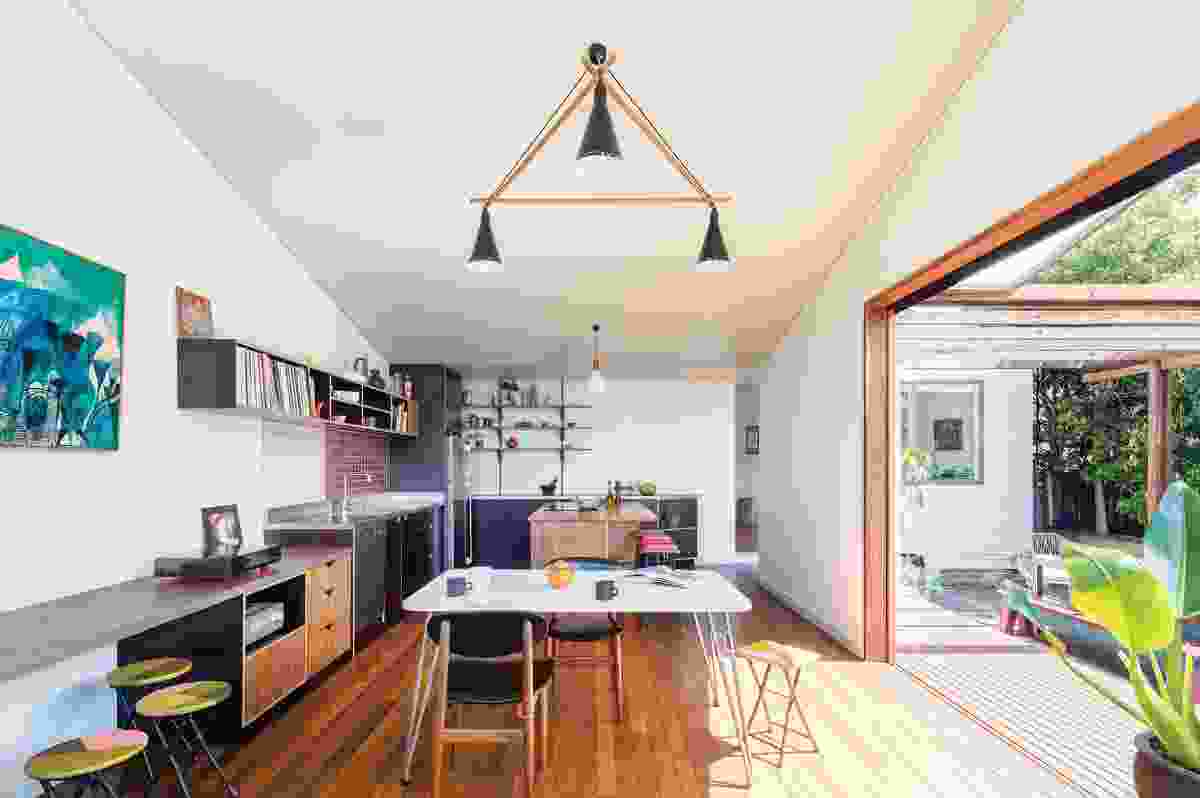 A triangular motif occurs in details throughout the extension, which houses a sunroom, kitchen and dining area. Artwork: Mignon Steele. 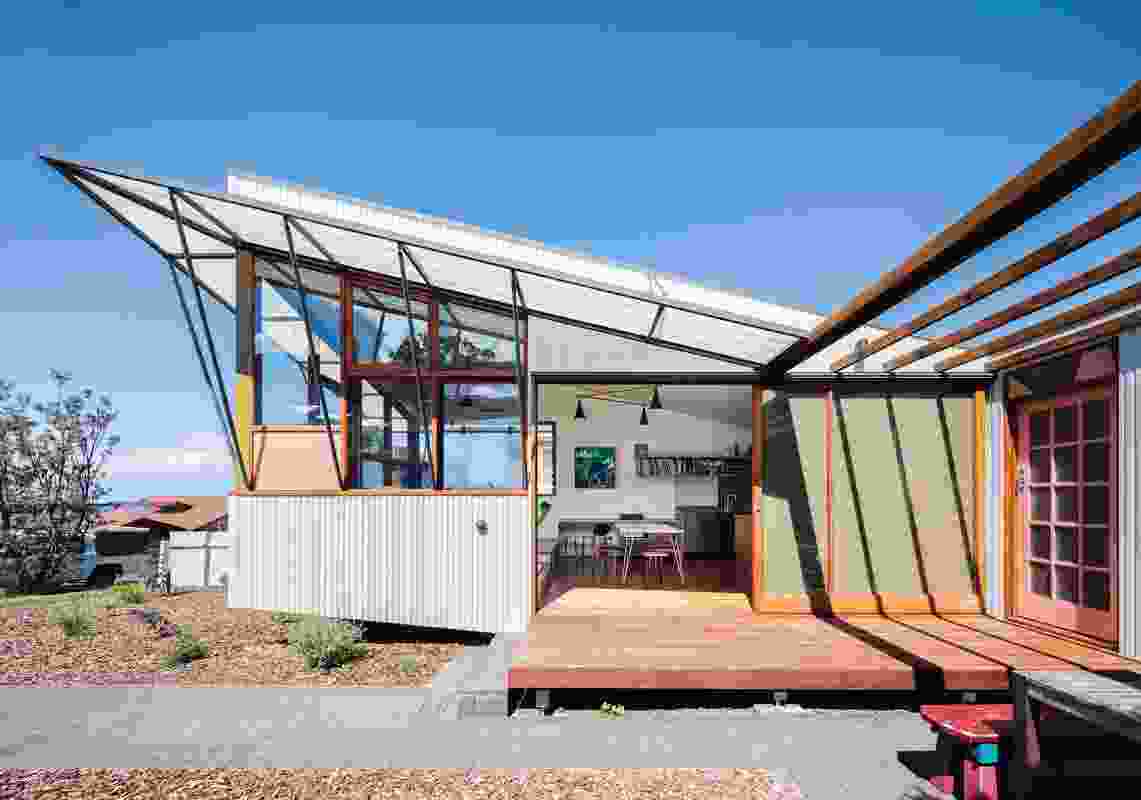 The skillion-roofed addition projects outward, hovering above the nascent garden like a ship over water. 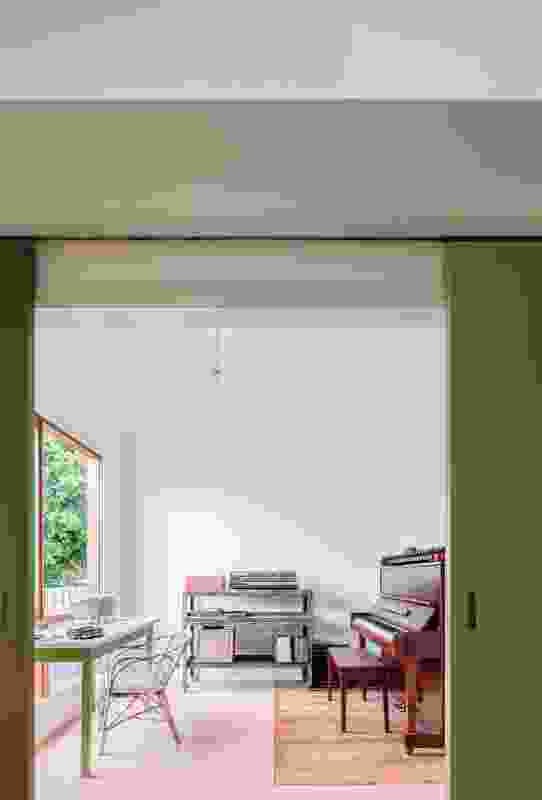 Coral-hued concrete is playfully juxtaposed with the home’s original floorboards in an idiosyncratic, coherent scheme.