The revised design for Southbank by Beulah, designed by UN Studio and Cox Architecture.

The mixed-use development, which would become Australia’s tallest building if approved, is designed by Dutch practice UN Studio and Cox Architecture.

Their two-tower “Green Spine” design beat out five other proposals in a design competition involving some of the world’s biggest name architecture practices. A statement from Beulah notes that the design has been refined since it was announced as the winner in August 2018, with input from the state government’s planning department and the City of Melbourne.

While the original winning design envisioned the tallest tower reaching a height of 356.2 metres, the proposed height put forward in the planning permit application is “in the vicinity” of 360 meters. A spokesperson for Beulah told ArchitectureAU that “The final height will be largely dependent on the planning outcome process.” Australia’s current tallest tower is Q1 on the Gold Coast, at 323 metres.

Slated for a site on the corner of Southbank Boulevard and City Road, the development would include a 4,000-square-metre fresh food marketplace at street level, with a series of stairs and stepped terraces leading up to the retail spaces and a “BMW experience centre”, with commercial offices, hotel, conference spaces, private residences and more above. In total the so-called “lifestyle precinct” will spread across 270,000 square metres.

Beulah’s managing director Jiaheng Chan said the development would be an “extension of the famous Arts Precinct.”

“We look forward to working alongside all parties to play a part in unlocking the area’s true potential and solving the urban pedestrian realm by creating a green and culturally vibrant Southbank.”

During the design competition in 2018 the Victorian government came under some criticism for what some saw as its apparent support for the competition. Treasurer Tim Pallas officially unveiled the six proposals at a glitzy symposium in Southbank, while Victoria’s government architect Jill Garner chaired the competition jury.

Melbourne Greens councillor Rohan Leppert told The Guardian at the time that “it does look like quite a conflict of interest.”

“It gives the strong perception that planning decisions can be made by going around the planning system if you’ve got a big enough and expensive enough PR campaign,” he said.

The project’s proposed height would be in violation of planning controls.

Beulah’s Jiaheng Chan said the tower would improve the urban environment on City Road and create an internationally significant landmark. The “twisting” towers will feature balconies and terraces nestled in the curves of the façade. Double height pocket parks will feature throughout, while at the top of the tallest tower their will be a publically accessible “sky garden”.

“We believe this project will significantly support the wider transformation of the area by creating a green active connected urban environment that invites and encourages an enjoyable experience for both residents and visitors,” he said. 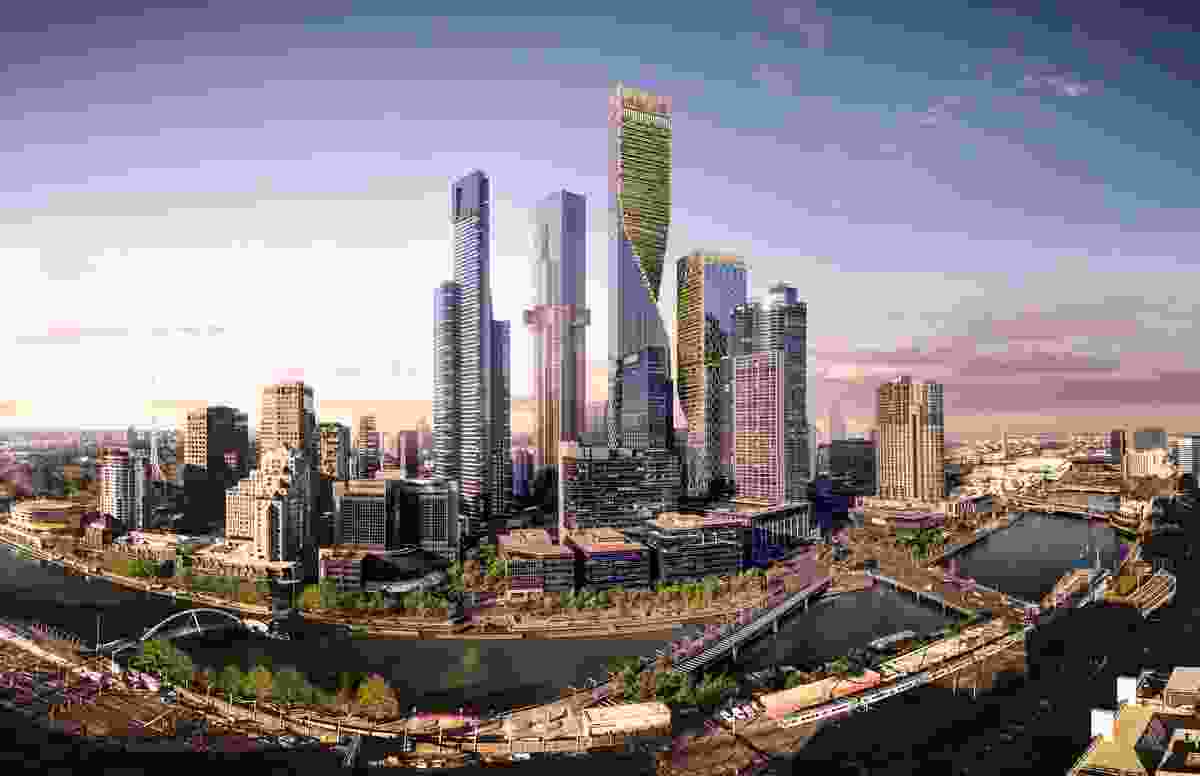 The revised design for Southbank by Beulah, designed by UN Studio and Cox Architecture.