With this house at Point Lonsdale on Victoria’s Bellarine Peninsula, NMBW Architecture Studio has cleverly arranged rooms and non-rooms under a striking roof form.

The detailing of thresholds and connections at the Point Lonsdale House by NMBW has been carefully considered – such as this protruding bay window from the kitchen.

The design of Point Lonsdale House by NMBW Architecture Studio is highly disciplined, both formally (its plan is basically a nine-square grid) and constructionally (its build was constrained by its location in a bushfire zone and by access issues). And yet this house does not project a sense of the aesthetic minimalism or knitted up constructional poetry that architects often take such restrictions to license. Rather, despite its discipline the house is possessed almost of a whimsy that perhaps responds to the way we might live in such a holiday place as Point Lonsdale. Located on Victoria’s Bellarine Peninsula, Point Lonsdale still has a low-key vibe, more shacksville than suburb or resort. Nestled behind the dunes, Point Lonsdale eschews the view. It’s as if the house’s aesthetic order – apparent in everything from plan arrangement to the location of handy hooks for towels and nooks for holiday paraphernalia – not only allows its inhabitants to hunker down comfortably in it, but quietly promotes this. Here, formal order facilitates domestic ease.

The plan of the house places four clearly defined rooms at the corners – two bedrooms, a sitting room with a fireplace, and a kitchen. The front entrance and a bathroom take up the centre bay on one side, while on the other side are further service spaces and access to a back porch. The middle bays in the other orientation are the main living spaces. Above these is a large attic space under the pitched roof, which can accommodate anything that might be needed: extra beds, games, movie nights for family and friends. Here, glazed gables orient our gaze to the sky and, at one end, to the top of a Norfolk Island pine some way off – a borrowed view of a minimal kind – the pointed top of which echoes the shape of the gable. Sills at attic level are too high for looking directly out or down, but light falls from the gables through voids on either side of the attic, and through a glazed area in the middle of its floor, to the spaces below.

The four corner rooms at ground level are carefully composed to indeed be read as rooms rather than abstract volumes. Each has a ceiling in the form of a white plasterboard cap that emphasizes the room’s volumetric specificity. Each has a bay window projecting from it, a sort of minor room that underlines the room-like qualities of the space from which it extends. Each has enough joinery to allude to the conventional elements of a room interior – wall panels, door, window frames, jambs and cornice. Unlike the sills in the attic, these are all perceptually just suited to human scale. Each room has a threshold between it and adjacent areas that creates a distinct separation. This threshold quality is especially apparent in the repeated framing expressed in the bay windows. On the bay that projects from kitchen to backyard, this produces a kind of theatre for enacting hospitality. Other spaces – the ground-floor living areas, the attic, the carport and the back and front landscape spaces – are by comparison much less fixed. The carport is particularly evasive. Its plan geometry is distinct from that of the house’s primary plan figure, but the disposition of its constructional elements takes cues from the layout of those in the house proper. At the entry point this contrast between formal and constructional organization makes a frayed edge, a gesture of indeterminacy that is the first thing a visitor encounters, a light veil over the geometric discipline to come. To me, the difference in the qualities of the spaces in the house – those confidently expressed as rooms versus those less bounded – has a social logic: rooms offer opportunities for composure; non-rooms offer social exposure. In these latter areas, it is furniture that defines what the space expediently lends itself to be. Over all of this hovers a big roof, a primary signifier of shelter.

While these descriptions help us understand the house as built object and social proposition, they do not exhaust the sources of the house’s design and the potential lines of its interpretation. In an era such as ours, which does not particularly hold with architectural principles, the provenance of design ideas has to be understood as contingent or circumstantial. By this, I do not mean merely that physical circumstance is the driver, though there is nevertheless a degree to which NMBW’s Point Lonsdale House can be read as a response to context. It sits where it does on the site, for example, because the house previously on the site was there – an intention to maintain the trees at the front and the back established the parameters of its positioning. “Circumstance” implies beyond this sort of thing the particular histories and trajectories that client and architect bring to a project, and possibly how they might anticipate the responses of others who encounter it. One thing I learned that the client brought was an insistence on a pitched roof. They also brought some Moroccan tiles that decorate the two bathrooms, and presumably other things reflecting their own tastes and interests.

What histories and trajectories did the architects bring? Consistent with an approach the practice has taken in other work, this design alludes to locally found precedents of construction, form and materials. NMBW principal Nigel Bertram pointed me to two nearby houses relevant to the Point Lonsdale House. Arts and Crafts period pieces, these are modestly built with roughcast rendered walls, dark-stained timber, high roofs and verandahs, and sit squarely on their well-treed sites. Yes, there are visual connections with the NMBW project, for example the exterior fibre cement boards of the new corresponding visually to the render of the old. But such allusions hardly explain NMBW’s house at all – they are rather like another veil, a first level of connection over others that are much wider ranging. One such connection that immediately struck me was with the Los Angeles work of Rudolph Schindler – concrete slab walls contrasting with frank timber joinery. Another, which Bertram volunteers, is with the work of Kazuo Shinohara: the concrete again, the big roof, the play with floor levels to suit the site and the programmatic response – all have Shinohara resonances. And the nine-square grid has long been an architectural plaything. It’s vaguely pleasurable to find these allusions. But rather than pinning the project down, such observations point to how broadly the circumstances of any design may be drawn. This is to be valued: not the list of identifiable references, but referentiality itself. Sure, the critic is left hopelessly trying to locate the work through visual clues, the previous work of the architects, leads and slips that become increasingly speculative. It is a measure of the architectural quality of this house that it can knowingly play along with such potential scrutiny and yet keep evading it. 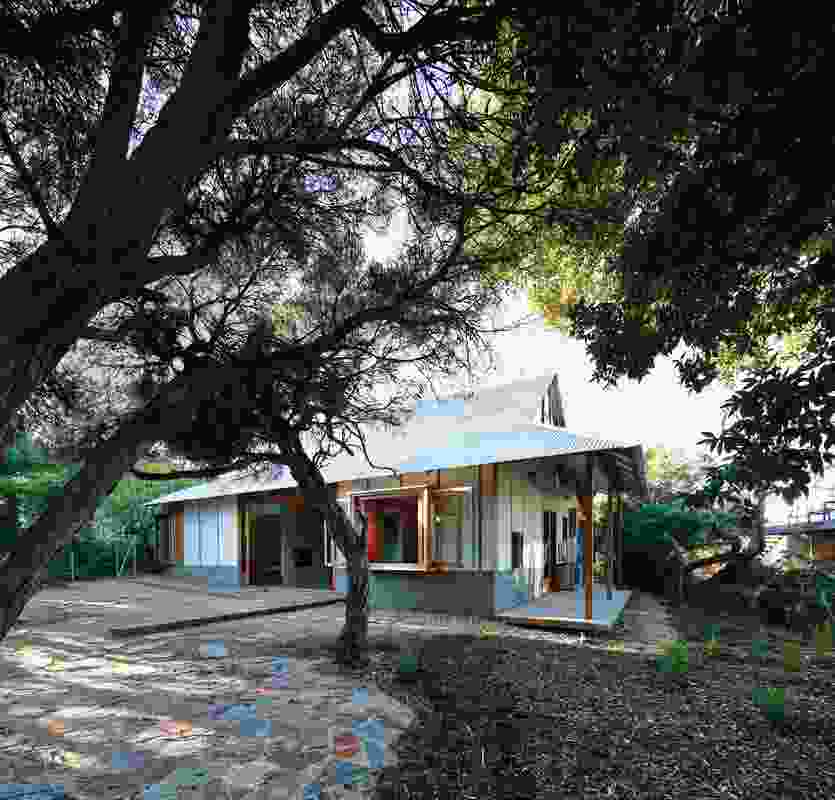 The detailing of thresholds and connections at the Point Lonsdale House by NMBW has been carefully considered – such as this protruding bay window from the kitchen. 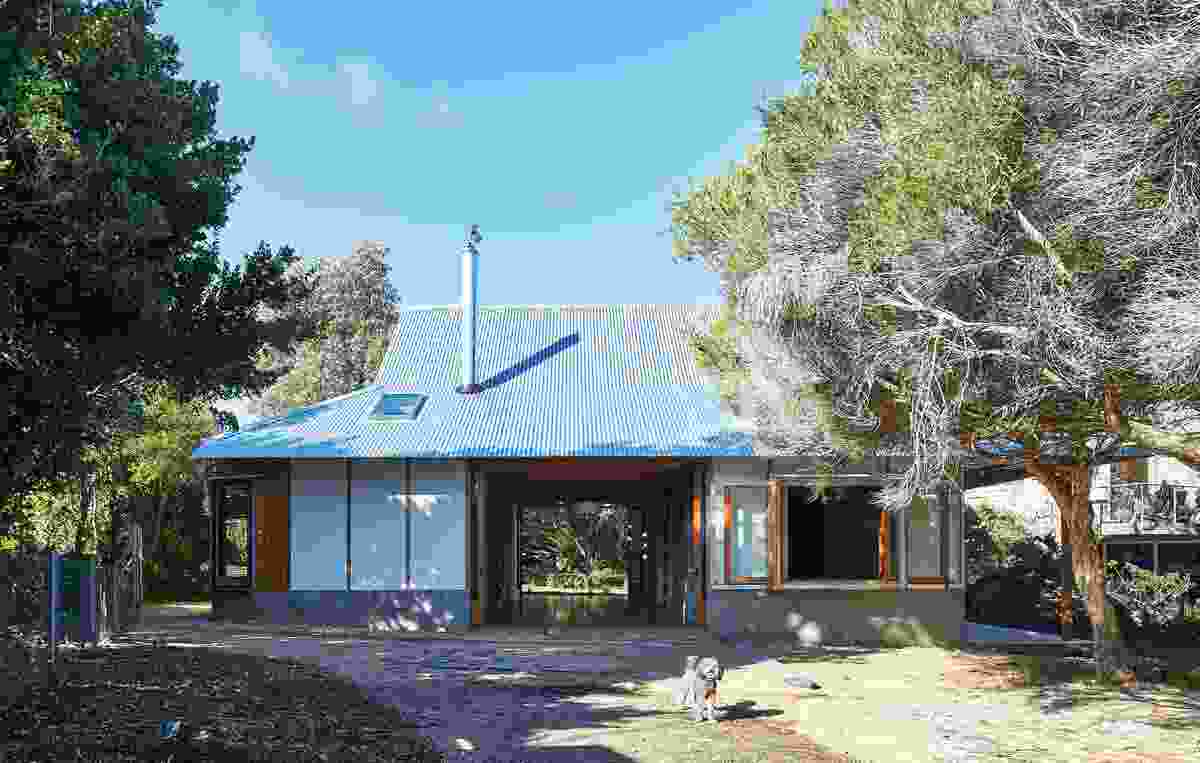 Planned according to a nine-square grid, the design places four defined rooms at the corners of the house, which sit under a striking pitched roof. 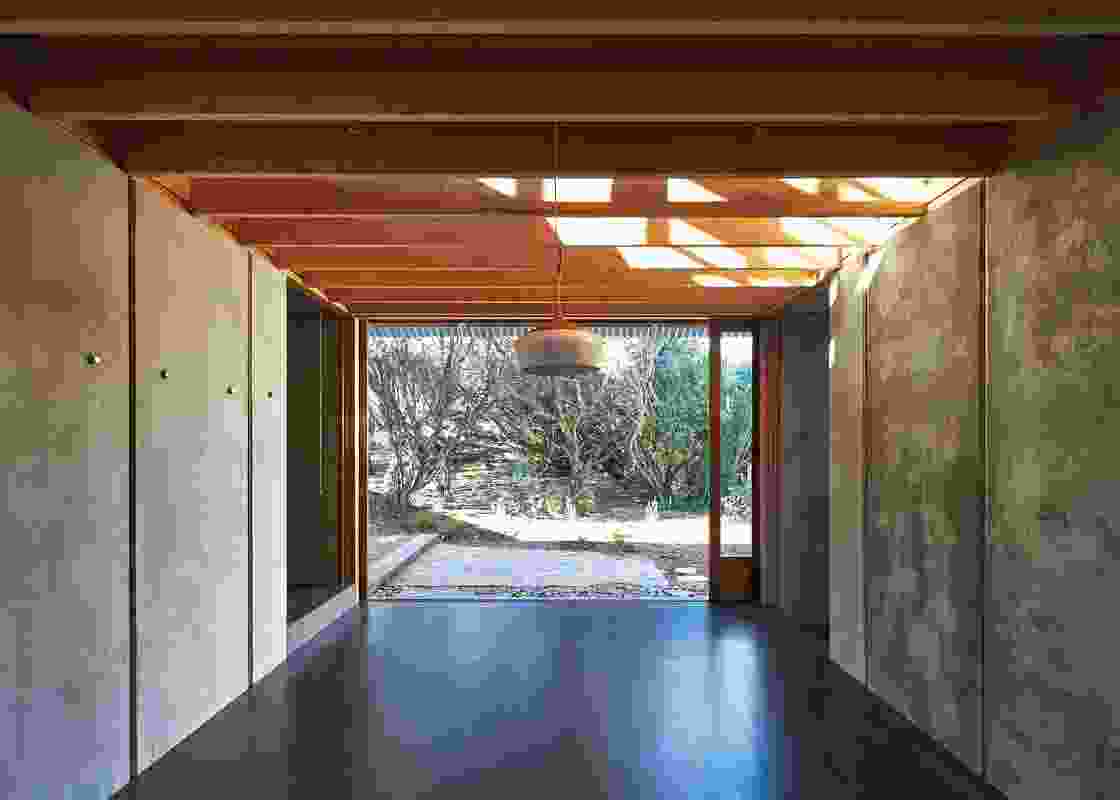 A play on the nine-square grid allows an open bay to run centrally through the house, providing a “common space” that can open to the elements at each end. 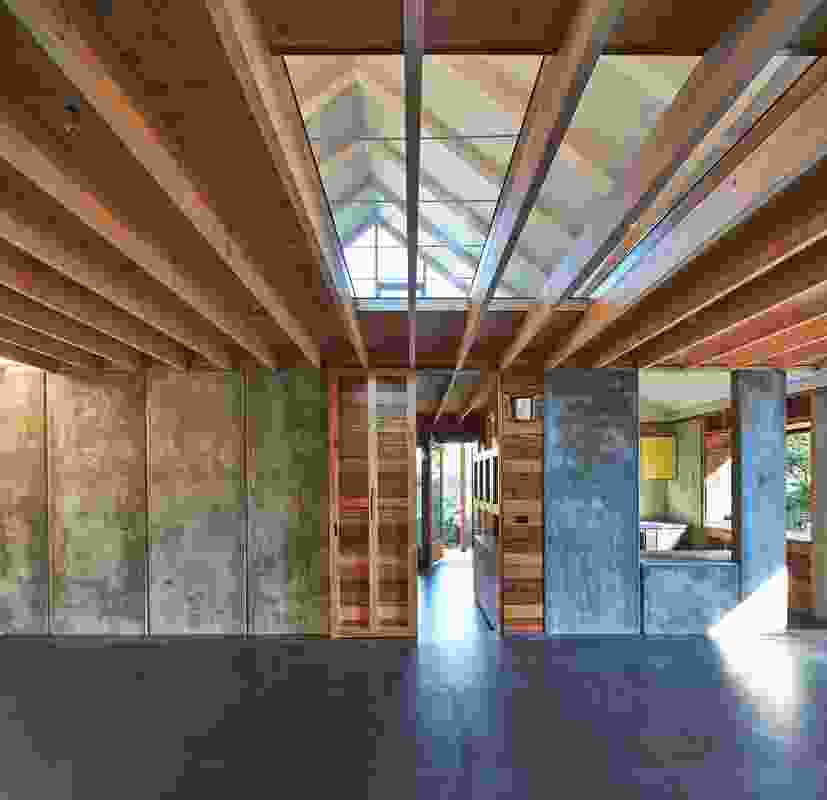 Light enters the attic through the glazed gable ends and is then filtered via a glass floor in the attic to the central common space. 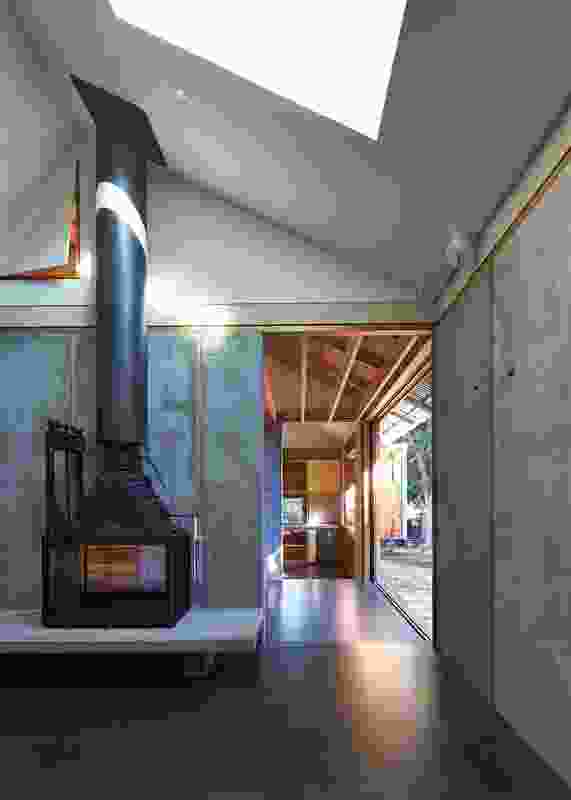 A playful triangular cut in the wall above the fireplace provides a link between the attic space and sitting room. 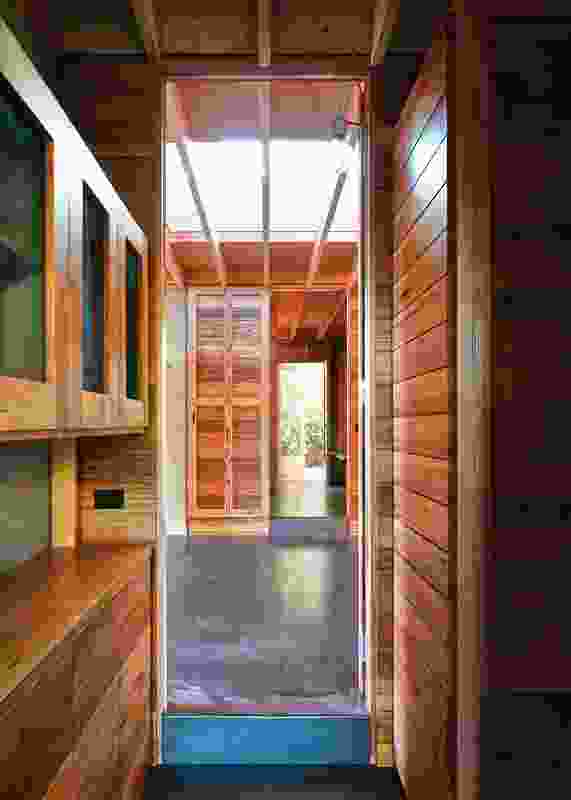 The rich colours of the timber joinery and dark concrete floor are illuminated by the light that filters through the glass floor of the attic above. 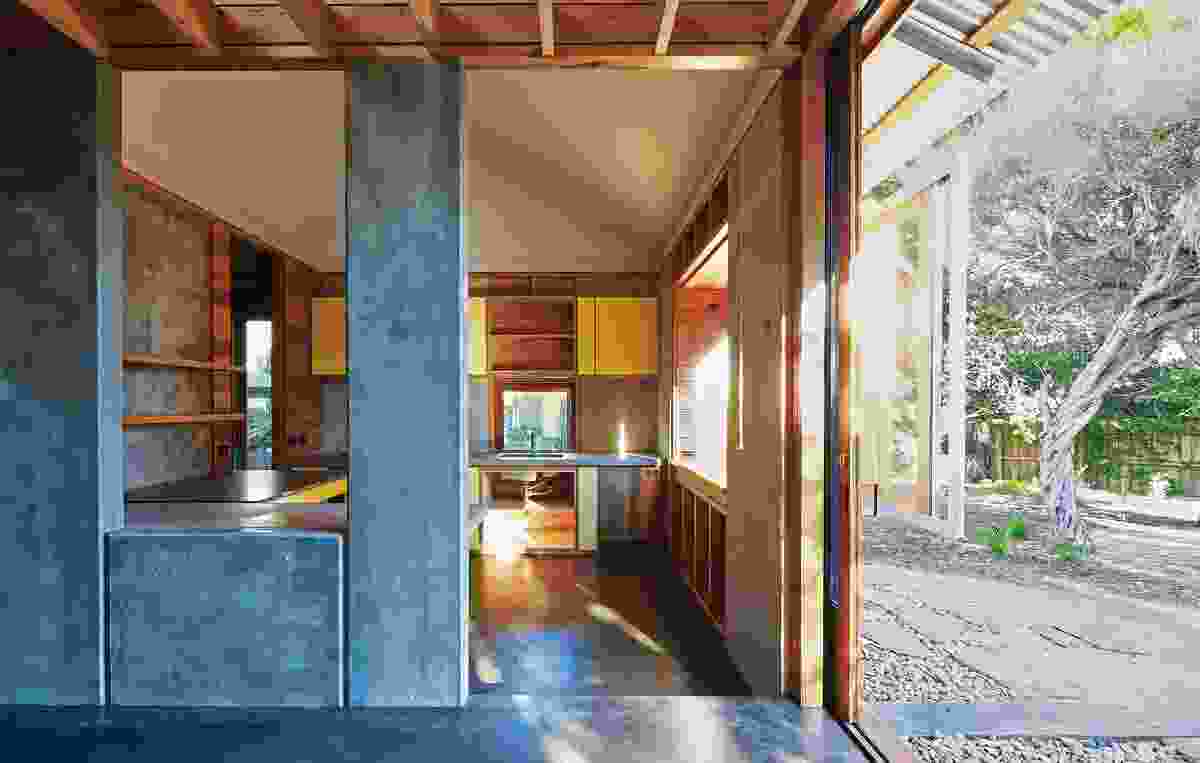 The bay window that projects from the kitchen to the backyard acts as a “kind of theatre for enacting hospitality.” 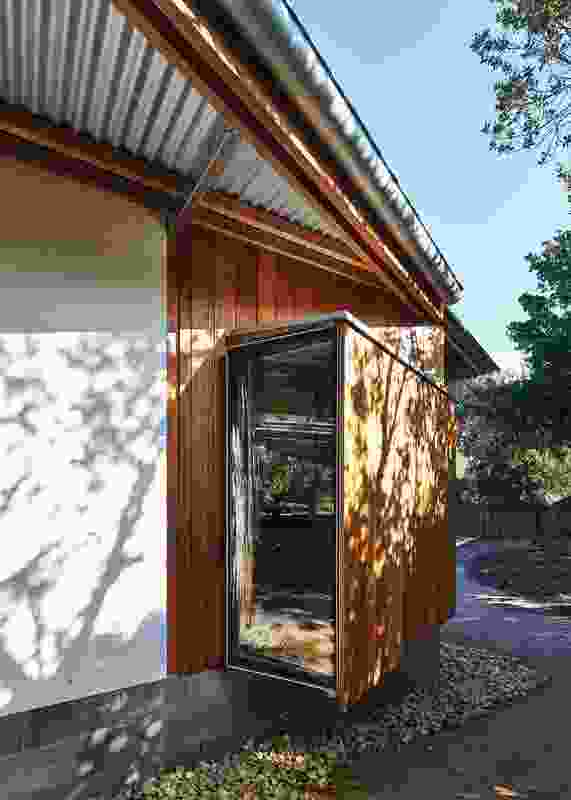 The skewed faces of the windows at the north and the south of the house are parallel to the site’s perimeter rather than being aligned to the house itself. 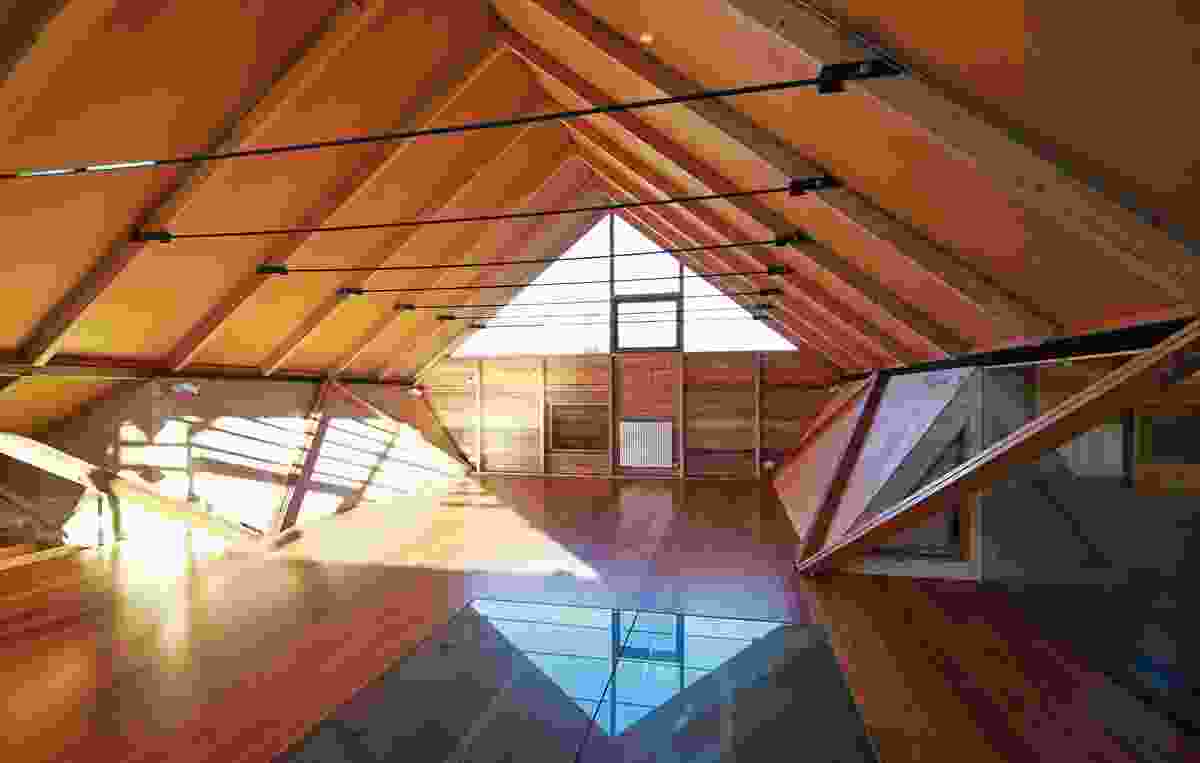 The large attic space can accommodate extra beds or a space for games and movies. 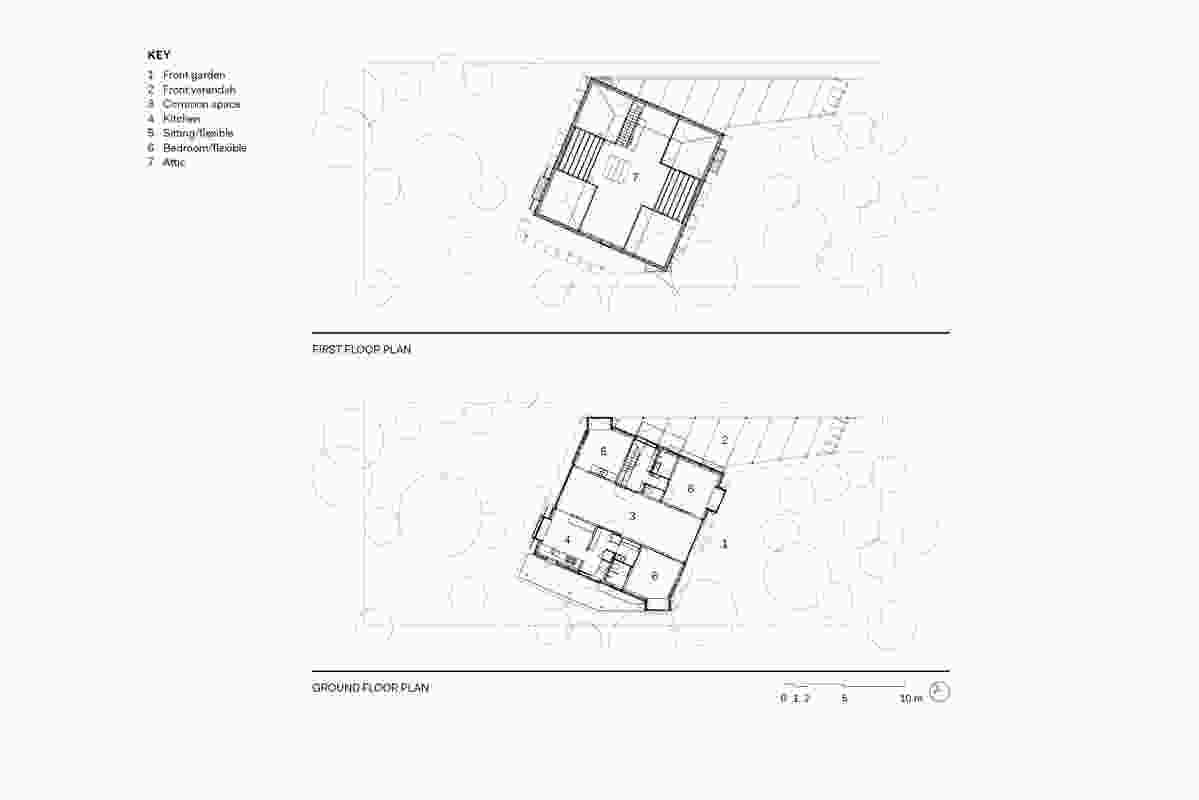 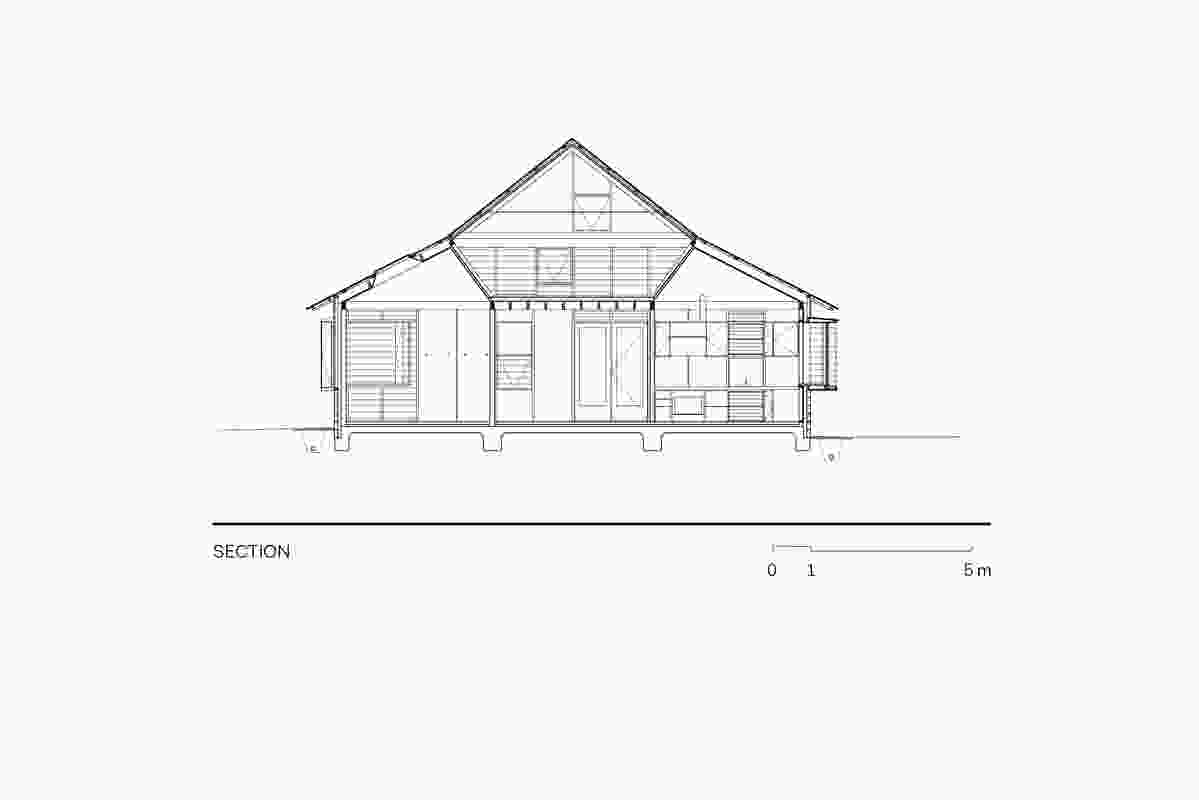