A simple pavilion formed from the remnants of an existing shed, this “thrillingly simple” project by Dominic Finlay Jones Architects makes the most of its majestic site.

From the forest the house presents as a simple, silvery grey trapezoid, its a roofline in tune with the tumbling slope.

A little pavilion sits on a hillside, facing due north, with breathtaking views panning west over the rise and fall of ancient mountain structures formed by the crucible of the Tweed Volcano, and east to the vast Pacific Ocean caught in the embrace of Cape Byron.

This modest building in northern New South Wales, known as Possum Shoot Shed, is a temporary dwelling: a sometimes “crash pad” for a couple and their grown children and a stage on the journey of creating a more permanent home further up the hill. It’s a place for “elegant camping” made from remnants of an existing shed that, while “not quite liveable,” offered up enough intact material in the form of corrugated sheeting and timber boards to enclose and ingrain the new structure with storied textures.

The property used to be a banana farm. Once cultivation ceased, weeds took hold, but the new owner is progressively loosening this grip through considered clearing and rehabilitation, having already planted 3,500 indigenous trees on the eastern slope and, to the south behind the shed, a hillside garden.

Access to the shed is from the north-western corner of the site. A narrow, winding roadway runs beneath the property, lined with a thick barricade of forest. As you emerge from this green enclosure and into a cleared patch of hillside, the views to the north-east and out to sea open up. The shed sits on a levelled contour, reoccupying the location of the original structure. Approached obliquely the new shed reads iconically, the end elevation a simple, silvery grey trapezoid marked by sliding panels covering two simple openings and a roofline in tune with the fall of the tumbling slope.

Between the gravel drive and the shed, broad, flat stones are set naturalistically into the casually manicured lawn, gently stepping up beneath the half arches of a stately palm to the threshold – a semicircular miniature patio – of the rust-protected door. An alternative path is set a little lower, also as a stone-stepped traverse, past an outdoor shower attached to a refashioned telegraph pole and up onto the elemental platform of a hardwood deck.

The shed is structured by a series of five steel portals that create four bays. In a 1:2:1 relationship, a central space for cooking, eating and lounging is bookended by two bedrooms, the one to the east for the early-rising parents and the one to the west for the late-sleeping children. While accommodating this diurnal sense of family inhabitation, the cardinal layout of spaces in coalition with the profiling of the cross-section also facilitates cross-ventilation. Four manually operated louvre panels in the south wall flush air into the high volume with no need for mechanical assistance.

A “big move” of a full-height south-facing glass wall infuses the central space with the grandeur of nature. The subtle act of canting this wall inward above door height somehow aligns the scale of the sheltered space to the hillside. Architect Dominic Finlay-Jones describes this invitational connection as a “living painting.” The garden planted on the hillside that fills the view is symbiotically protected from prevailing winds by the very pitching roof that makes the southern connection so grand.

From within the thrillingly simple interior, washed in the gentle light of the southern sky, full cycles of the days and seasons are read as the garden comes alive with changing colours. This close-up reading of the site through its unique conditions is counterpointed by the sweeping arc of macro landscape spectacles available from the northern side of the dwelling: the sun emerging daily from the Pacific horizon and setting behind Mount Warning and the ranges encircling the Tweed Caldera.

Not everything about Possum Shoot Shed was designed up front, opening a serendipitous space for improvised and responsive collaboration with the builder and other local makers, which is vital to the processes of Dominic’s practice as it pursues the design of “low-tech and even no-tech things that work.” Believing that there is a spirit in this part of Australia that embraces the connected ingenuity of people, Dominic loves working here for the rewards that come from the “beautiful places and the beautiful ideas” that this landscape enables.

As another house will soon be built further up the hillside, closer to the scenic ridge, the making of Possum Shoot Shed was a kind of relationship test for the architect and client. As the clients researched the local profession, Dominic’s practice emerged as one of three prospective choices. An appreciation of the processes and outcome of their previous work, particularly The Farm at Byron Bay, was the “on-ramp” for their connection and subsequently the aesthetic direction of Possum Shoot Shed. And since the client will be active and on site for the construction of the next house, the success of the dwelling goes beyond the outcome of its completion and enjoyable occupation: it was a proving ground for bigger things to come. 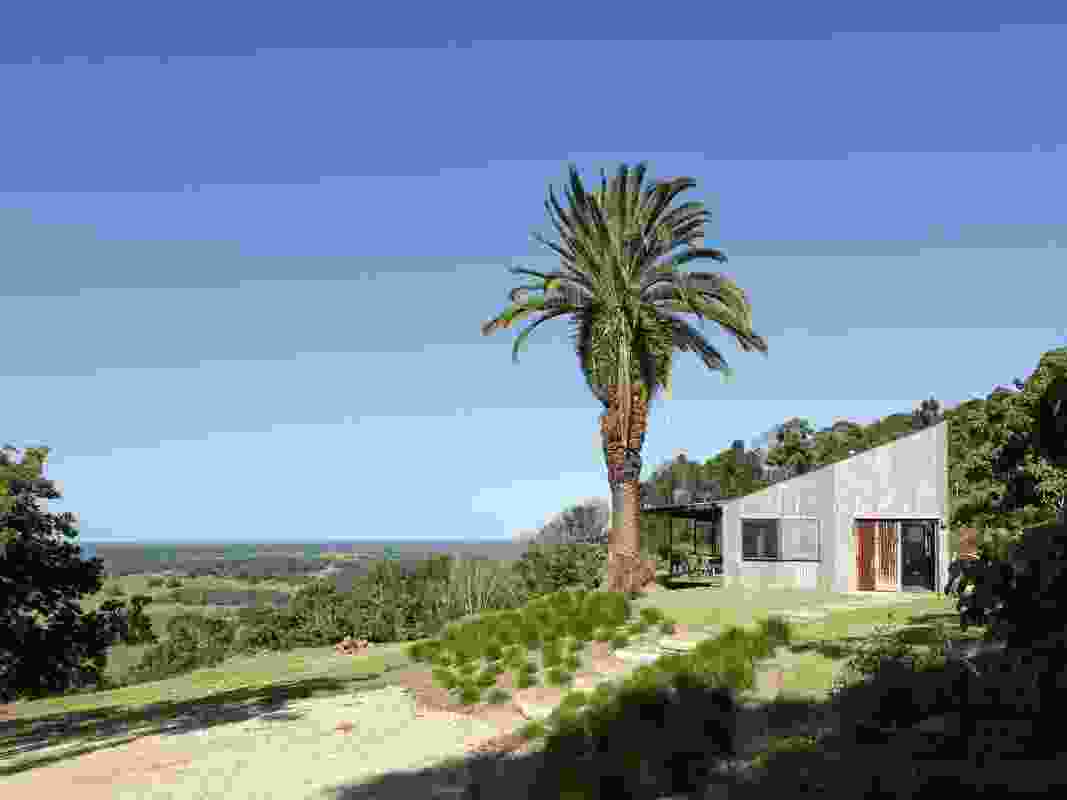 From the forest the house presents as a simple, silvery grey trapezoid, its a roofline in tune with the tumbling slope. 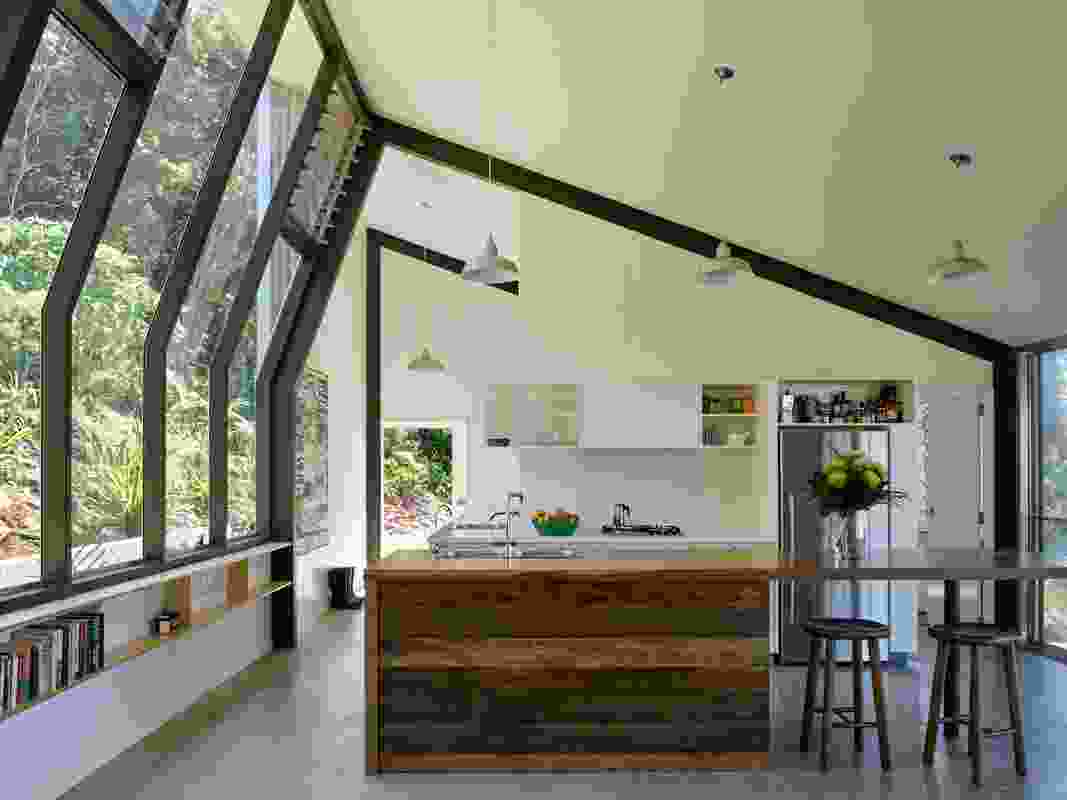 The pavilion is divided into four bays, with the two outer bays devoted to bedrooms and the inner two as living space. 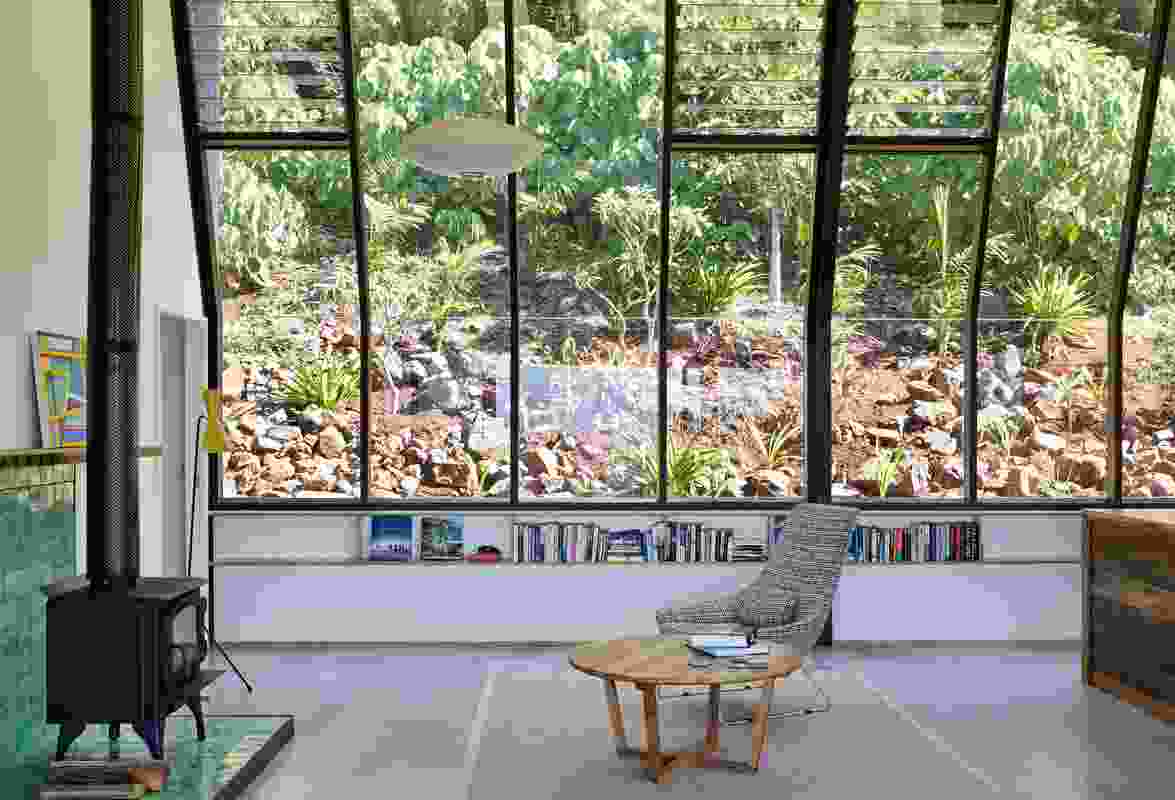 A south-facing glass wall aligns with a hillside garden to create what the architect describes as a “living painting.” 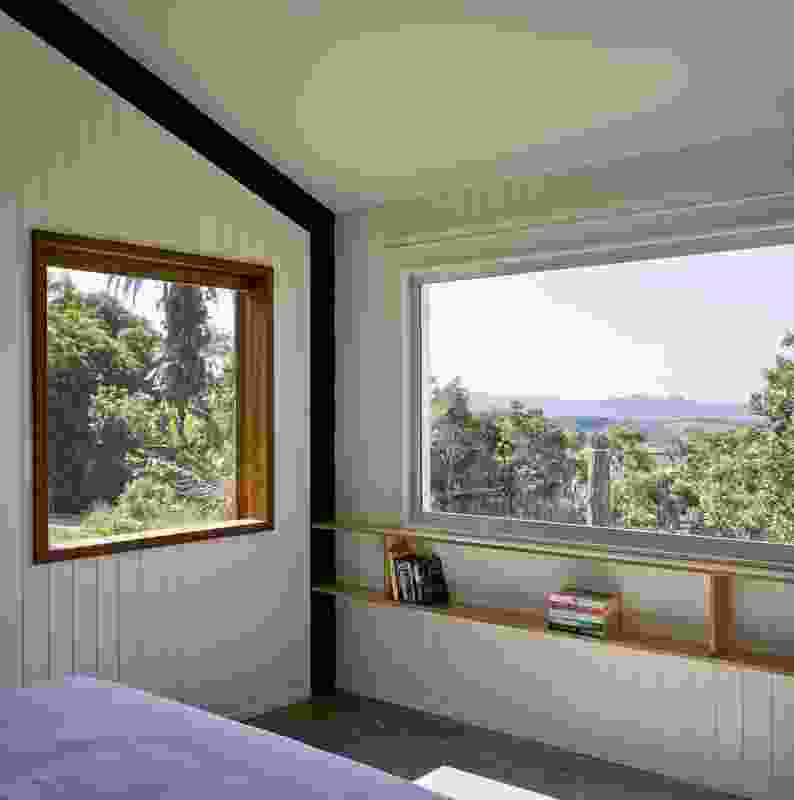 The macro landscape spectacle offered by the northern frontage counterpoints close-up views to the south. 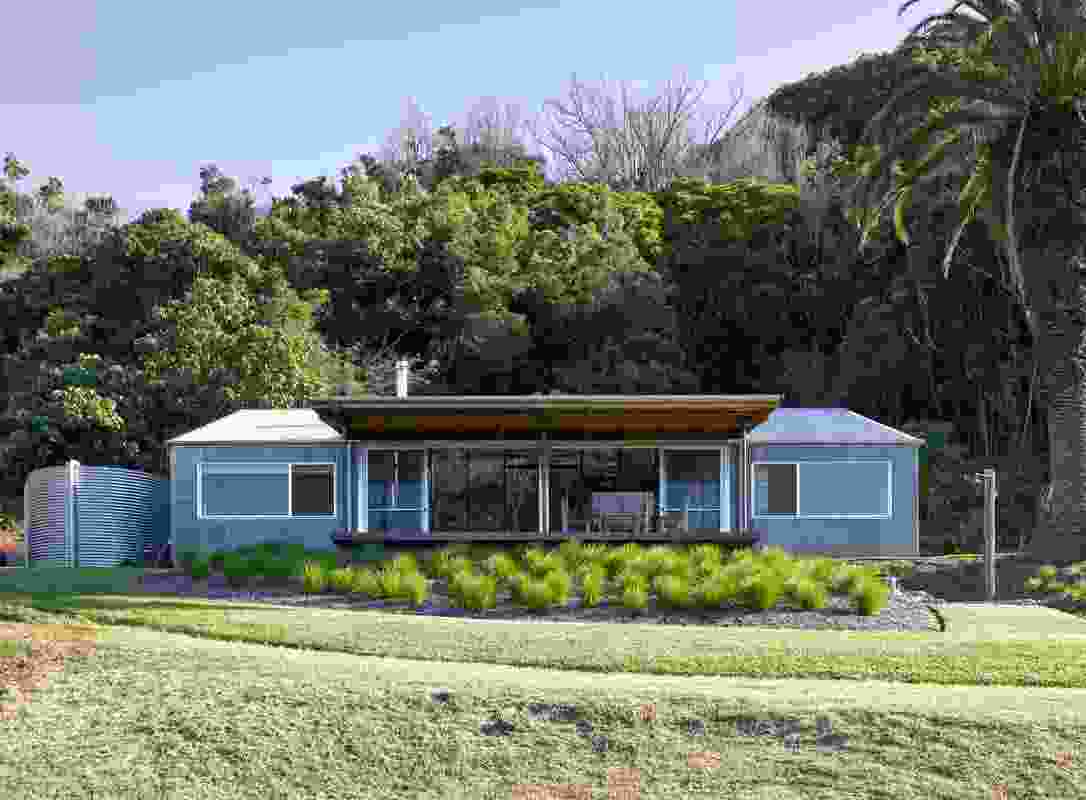 The owner is progressively loosening the grip of weeds on the old banana farm site through considered clearing and rehabilitation. 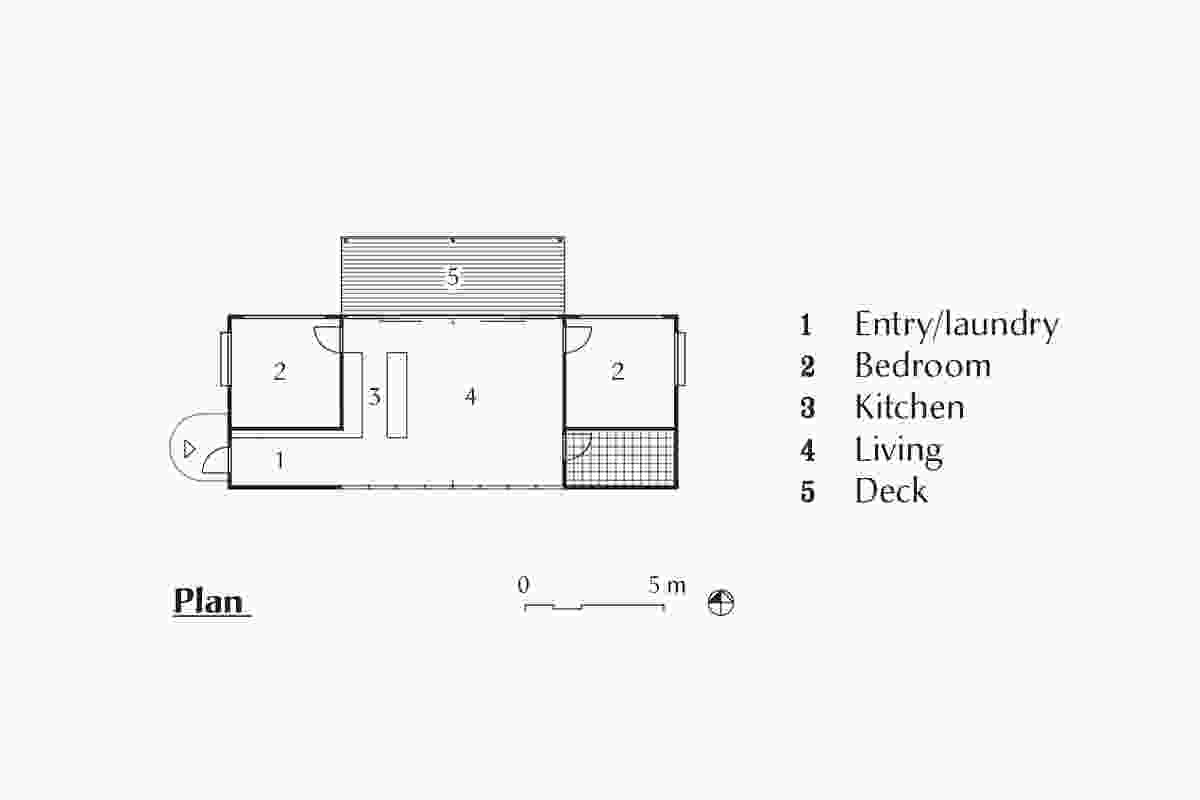 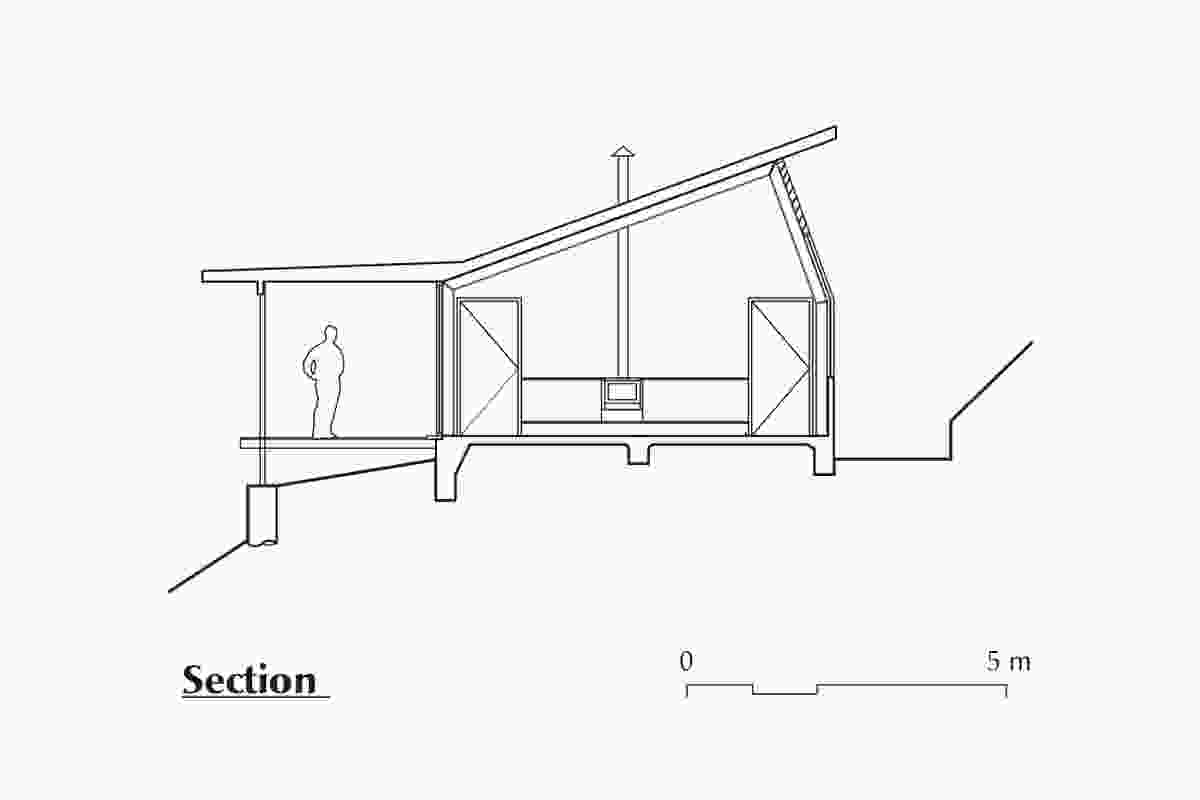