One to One Wall House: HY William Chan

Contributing to this building project, described as the centrepiece Biennale installation by the creative director, David Chipperfield, has been a once-in-a-lifetime experience that will no doubt influence my learning and future practice of architecture.

Creative zeal and energy for both architecture and people is one of Anupama’s strengths. Her project shares a relationship to Chipperfield’s theme of Common Ground by physically and architecturally transposing her original house into the context of the exhibition space, Venice’s historic Arsenale. The project explores the connection between old and new as well as breaking cross-cultural boundaries.

A key feature of the house are its hand-made Indian clay bricks which merge with the striking heritage-listed Venetian brick columns of the Corderie – formerly Venice’s naval rope factory. In Anumpama’s words, it is “seamless and integrated, the Indian brick and the Venice brick – the architecture is ‘one’.”

Speaking to Kieran Long, renowned architecture critic and Chipperfield’s assistant director, the construction of the Wall House One to One has stood out in the preparations for the Biennale.

“Just seeing a building being built inside a building is breathtaking. “We knew what she wanted to do but we couldn’t have possibly anticipated the experience of seeing it.” —Kieran Long

“Just seeing a building being built inside a building, seeing the bricks next to these bricks seeing that effort, it is breathtaking – that was a wonderful moment,” he described. “We knew what she wanted to do but we couldn’t have possibly anticipated the experience of seeing it.”

Although there is a strong connection to the original house and historic exhibition space, the project isn’t about time. Instead, it is “timeless” as Anupama states. The bricks, interlocking tubes and filler slabs have all been hand-made in Auroville, India. The traditional works of art were shipped to Venice and are now showcased to the international architecture community is a celebration of the emotion, effort, culture and people of India.

The cultural differences and language barriers were challenging, and teamwork became imperative in such an environment. To be able to learn and work alongside the others has nbeen immensely rewarding during this time.

Long said our collaborative approach to the construction was really ambitious but sincere and adaptable. “To see all of you guys working together – that was amazing,” he said. “One thing that definitely surprised me was the excellent level of execution. In general, if you go through [the Wall House], it is of a very high level. It’s not easy for people to do in an exhibition context with no time and no money.”

The journey has not been easy, to say the least, but what has been achieved is remarkable. To be involved with the Venice Biennale, to help build a house in two months, to be exhibited next to Zaha Hadid, to actually exhibit architecture at an architecture biennale and to represent Australian architectural talent on the international stage – all of the intense late nights have absolutely been worth it.

Of itself, Wall House One to One is a true testament to what “common ground” can achieve within architecture. The Vernissage preview of Wall House One to One and the other International Architecture Exhibitions at the Venice Biennale begins today with the public opening on Wednesday 29 August 2012. See a brief background article about the project here.

One to One Wall House: HY William Chan 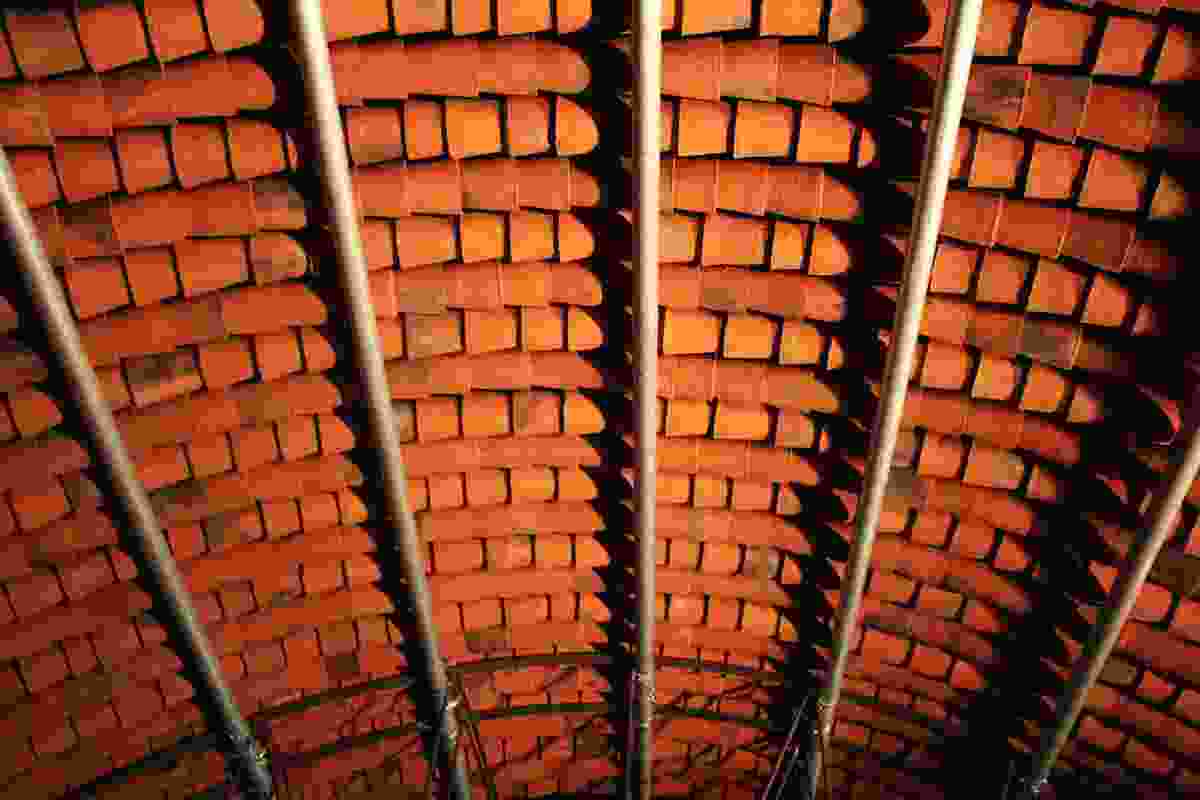 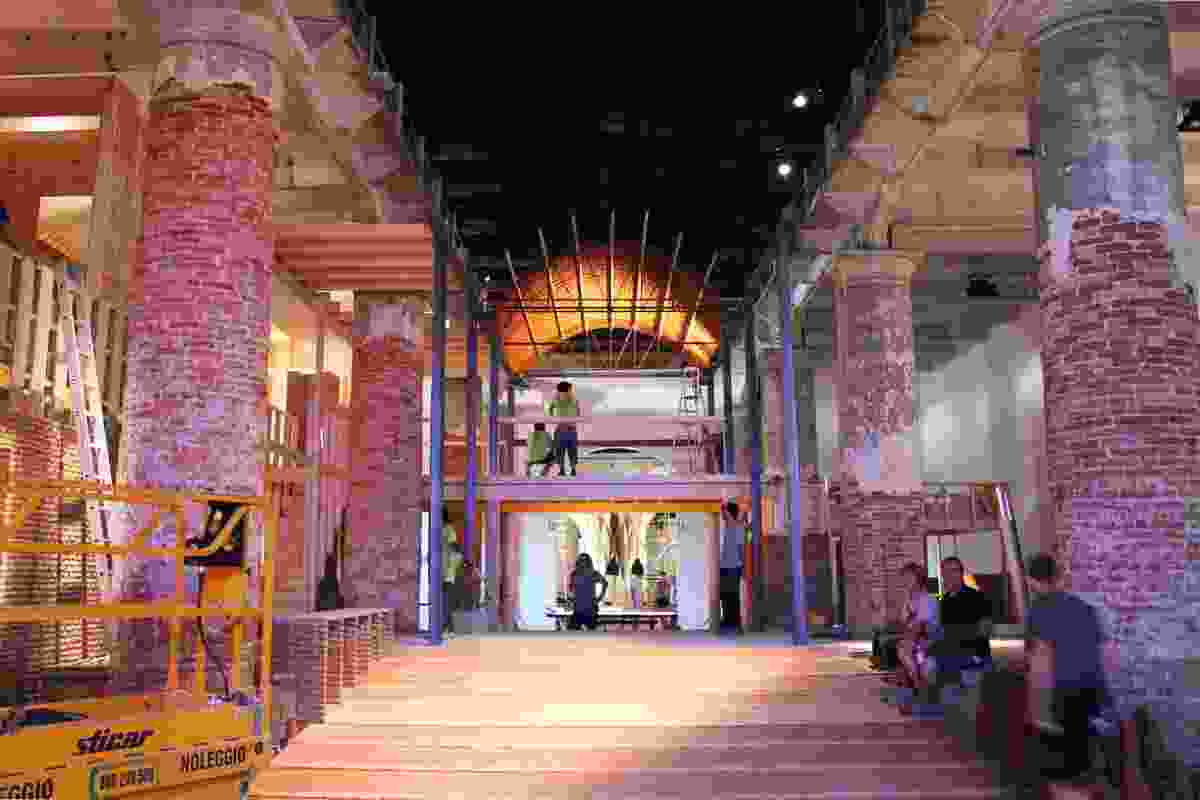 Final preparations being made to the Wall House One to One exhibit. 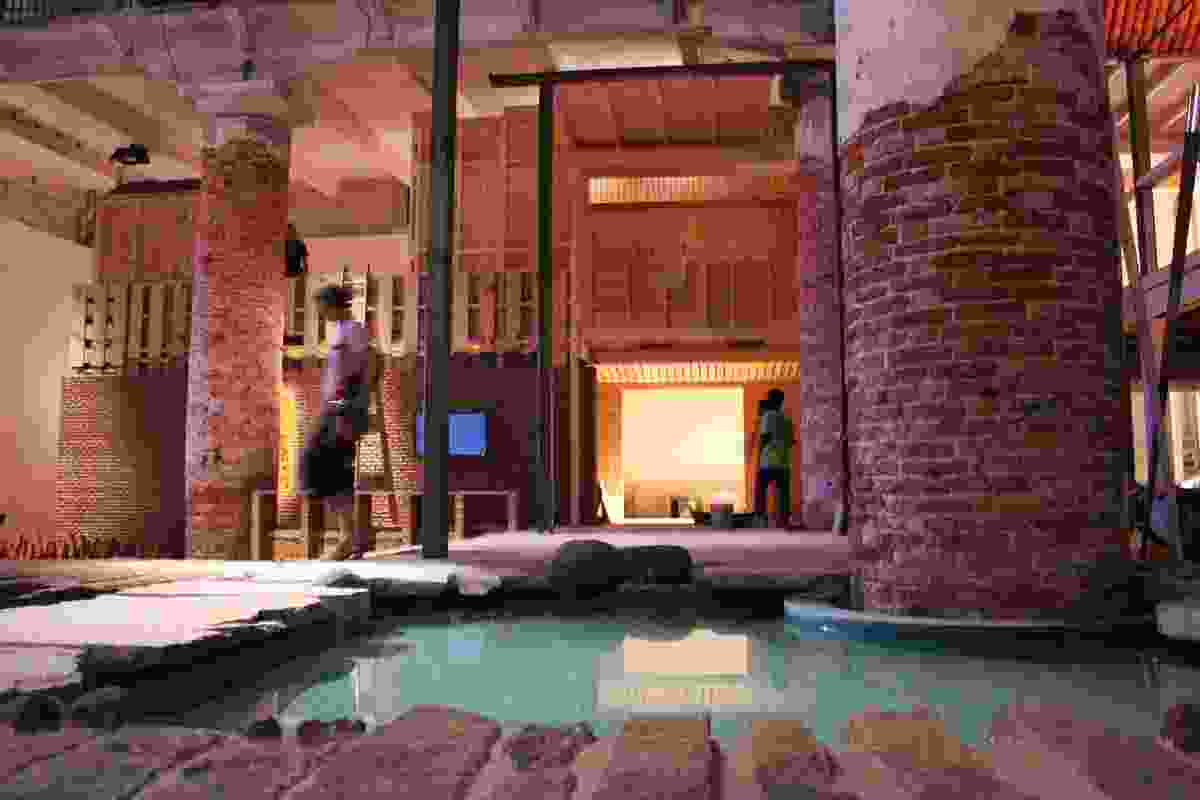 Brick column of the Arsenale’s Corderie extend from the landscaped pond. 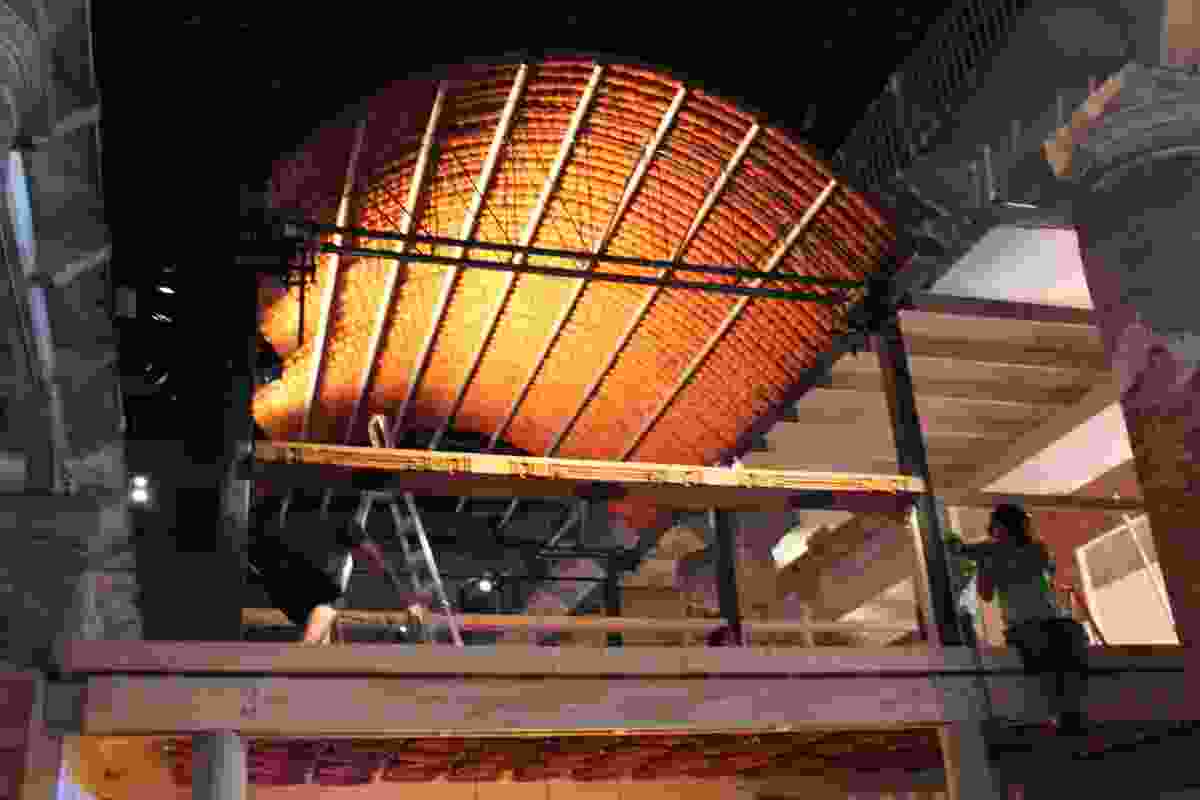 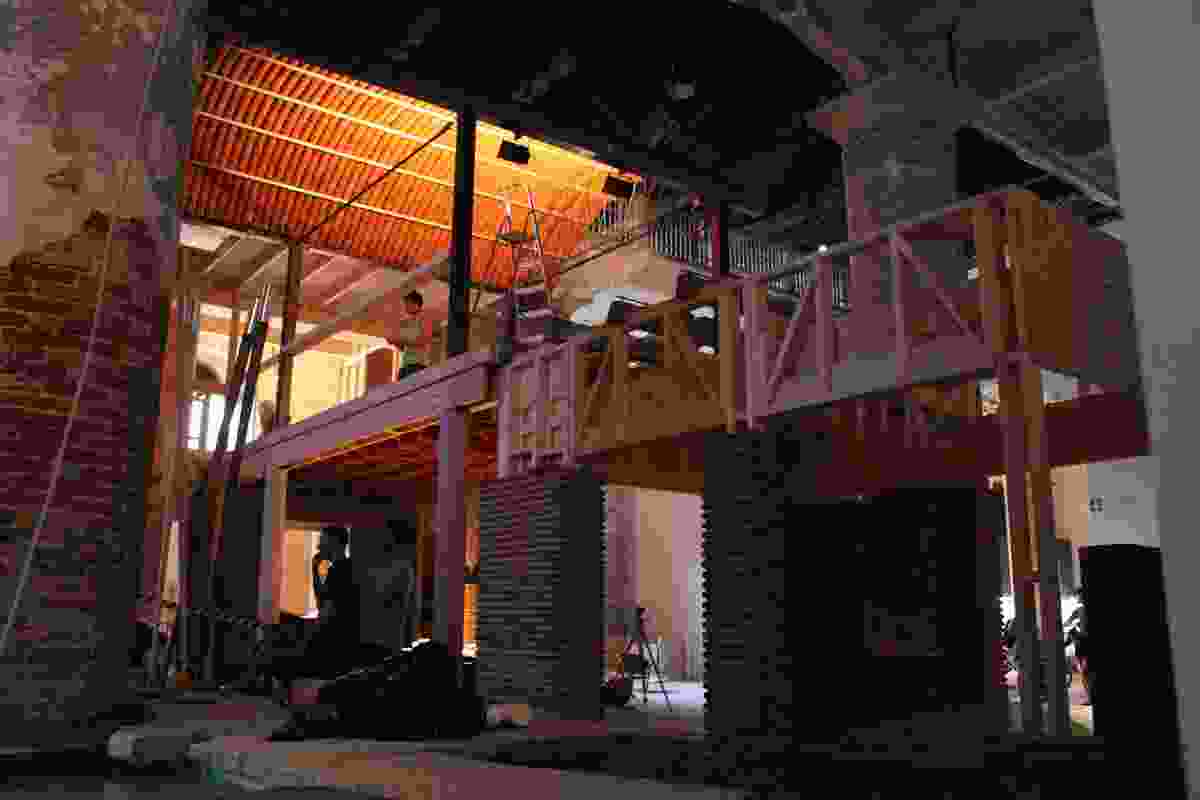 Mezzanine level with the main vault created from terracotta pots. 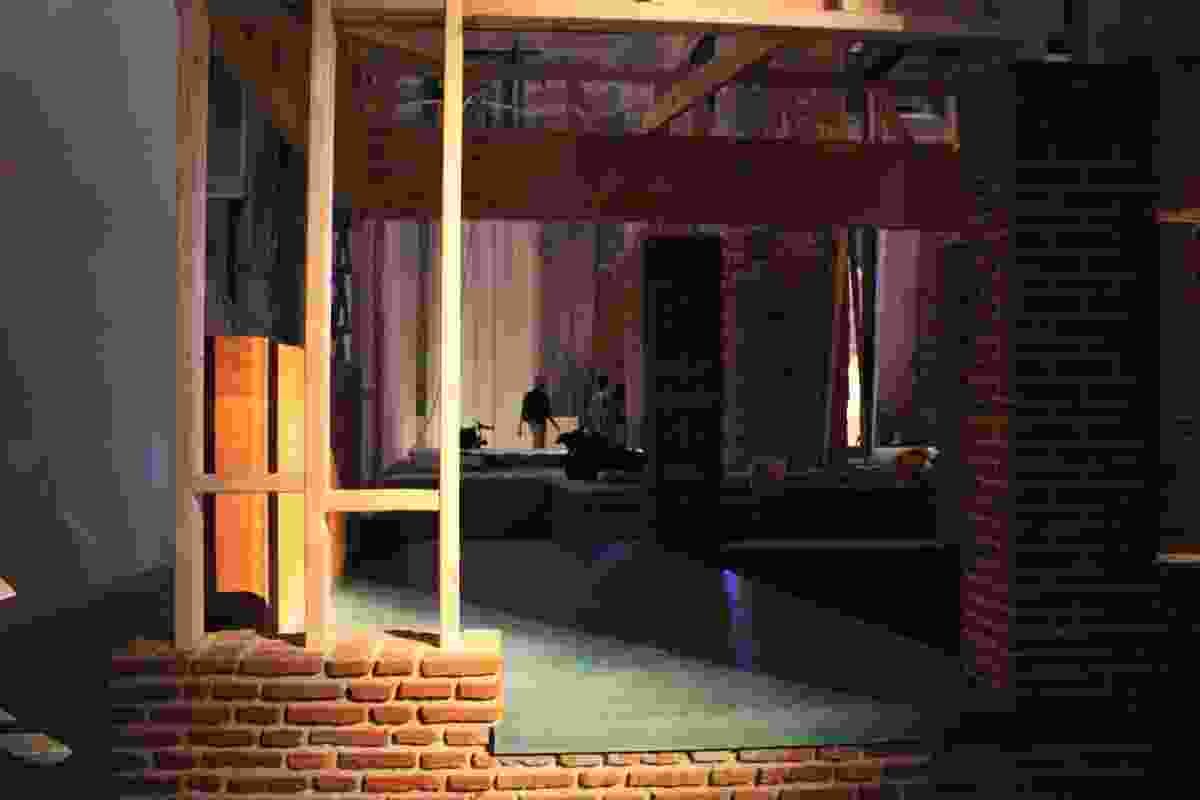