Postcards from Japan: Part I

A series of temporary housing and community building projects by Shigeru Ban are underway in northern Japan. Professor Andrew Barrie from the University of Auckland journals his travels through the area.

I’m on the road in Tōhoku, the region of northern Japan devastated by the ‘3/11’ triple disaster of earthquake, tsunami and nuclear accident. I’m heading for a town called Onagawa on the Pacific coast to visit a post-tsunami temporary housing project by Shigeru Ban. I stayed the night in the city of Sendai, arriving after dark as a typhoon blew in. In the morning light, I could see downtown Sendai was bustling and damage-free, and even looked freshly washed by the storm.

The first stop on today’s journey to Onagawa was Matsushima, where we had to transfer from train to bus due to damage to the rail lines. Located on the coast with almost three hundred tree-clad islands populating a picturesque bay, Matsushima is regarded as one of Japan’s most scenic spots. An attendant at the station told me the tsunami had washed in across the road from the adjacent sea wall, but due to the protective effect of the local geography, the water had only reached the height of the gutter.

Once on board the bus, it was clear we were moving into the disaster zone. A stretch driving parallel to the railway made clear why the trains weren’t running – the poles supporting their overhead power lines were tipped over at odd angles and the lines themselves were hanging snapped and useless. Soon we were passing through coastal villages where it seemed every other house had been removed, leaving tall grass growing up through the concrete foundations. Many of the still-standing houses bore the scars of the tsunami – eaves crudely bashed away, windows pushed in, and gouges on the walls. Most of the damage was on the seaward side of the buildings, and it was easy to imagine the rush of water, neighboring buildings, cars, and other debris sweeping inland. From time to time, we drove past gigantic, straight-sided mounds of debris, all sorted into types – chunks of concrete, shards of timber house framing, even one of mattresses, curtains and household fabrics.

My destination, once the sleepy fishing port of Onagawa, has been erased. The town’s dense network of roads and footpaths now serve plots of gravel and weeds. With the debris cleared away, the first impression is not of a town destroyed but absent; less of a wound than a scar. Looking closer, signs of what was lost are scattered in the gravel: kitchen utensils, shards of crockery, pieces of circuit board, and everywhere pieces of broken roof tile. The only buildings remaining are three concrete buildings, including the local police station, that were yanked from the ground by the force of the water. They are almost complete, but like trees felled by a storm, they’ve been tipped over on their sides, their torn foundations hanging out in the air. There is a proposal to leave them where they lie as a memorial.

Nothing permanent has yet been rebuilt. The current plan is to raise the ground level of the whole town by 8.5 meters by leveling some of the surrounding hills and filling the valley where the town was located. It’s an astonishingly ambitious plan, but it’s hard to know how much comfort it will create, given that the shape of the bay created a funnel for the tsunami, such that the incoming water reached a level of 15 metres.

The height of the wave can be clearly seen on the steep hills that enclose the town. The salt water killed the pines, leaving a horizontal band of dead trees ringing the now empty valley. Most of the towns along Japan’s northern coast are wedged into small bays surrounded by steep wooded hills, and the key problem with temporary housing is finding sufficient unoccupied flat land. This is exaggerated by the low density achieved by the Japanese Government’s standard-issue single-story temporary housing. These buildings are also characterized by the flimsiness of their construction – residents can easily hear their neighbors talking on the phone, and even cigarette smoke drifts between units. While these buildings have a nominal life of two years, the reconstruction might well require four or five, so these discomforts will endure.

Ban’s temporary housing sets out to adress a number of issues. Using two-and three-storey blocks, Ban easily accommodated 189 units housing about 400 people on his site – a baseball field in the local sports park. (Surreal scenes ensure – views down the access lanes are terminated by baseball dugouts and a large grandstand). With a primary structure made from old shipping containers, the houses could be built quickly and so work on Ban’s site was completed in a little over two months. These new structures are more solid than the standardised housing. The vertical stacking of the housing units also leaves space on the site to meet another pressing need: a lack of community facilities. Ban has provided three community buildings – a cardboard-tube framed ‘atelier’, a tent-roofed market, and a community center whose shipping container perimeter and pitched roof make it a something of a miniature of Ban’s under-construction Cardboard Cathedral.

Onagawa, which lost around a thousand of its citizens to the tsunami, faces enormous challenges in its rebuilding. Ban’s intelligent contribution will make the process of working and waiting a little more bearable.

Postcards from Japan: Part I 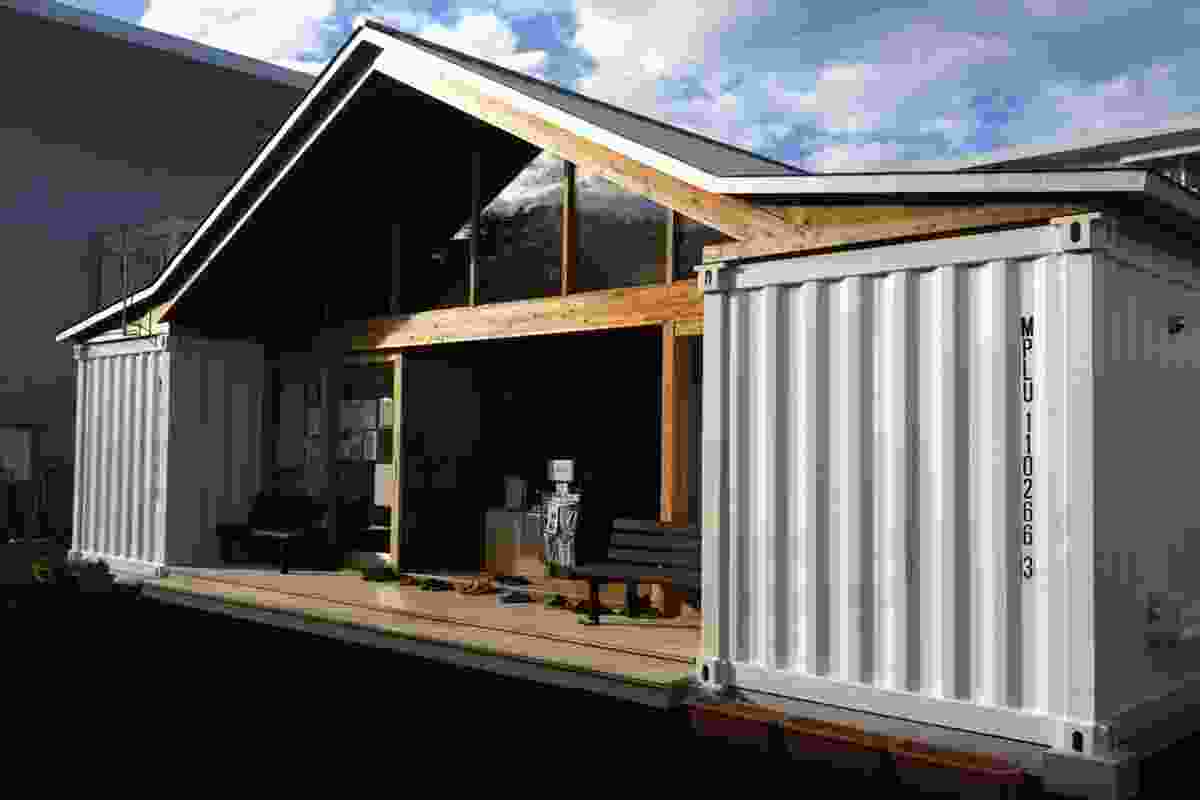 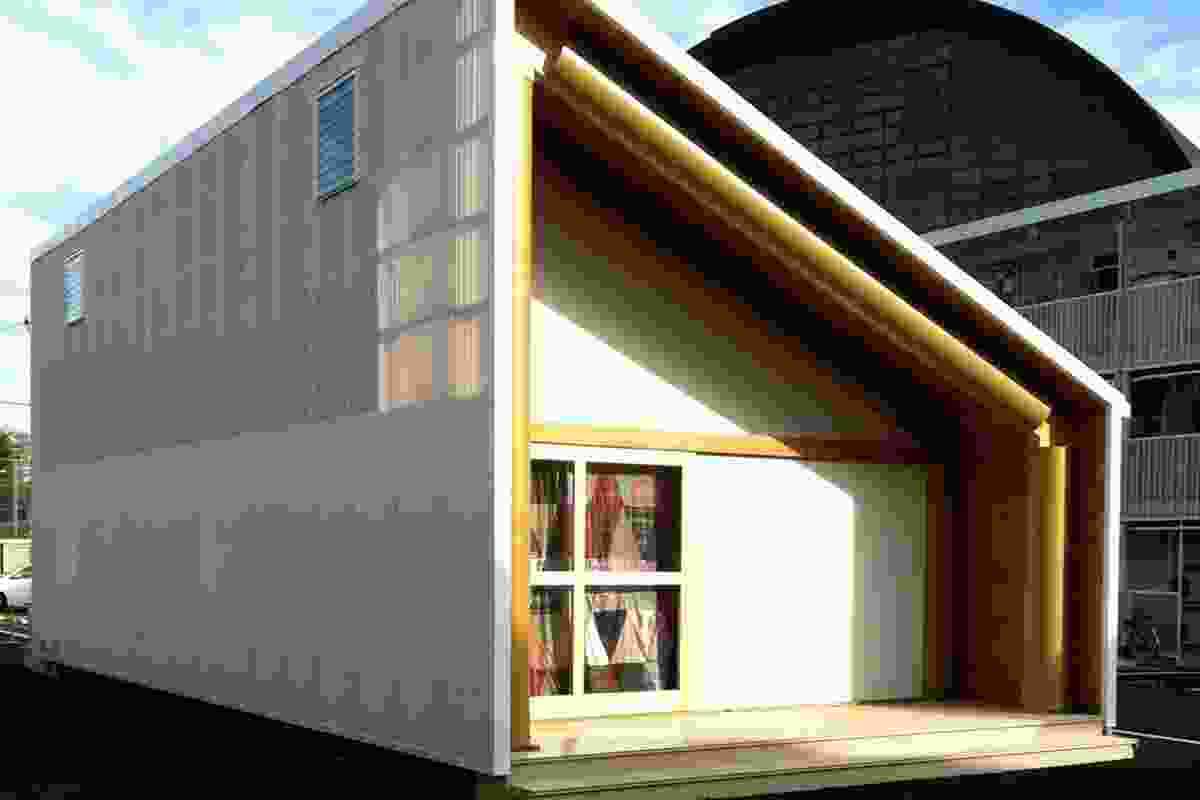 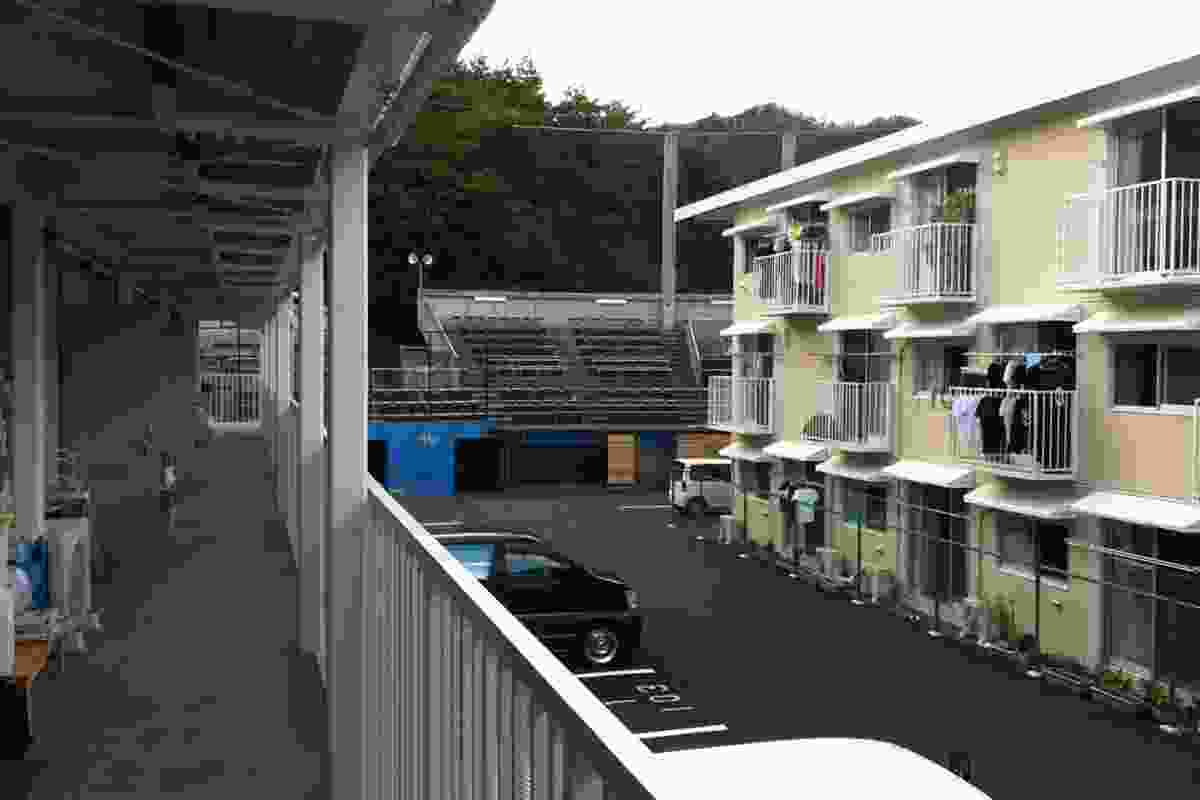 Ban’s housing units have been laid out in a baseball ground, ringed by a grandstand. 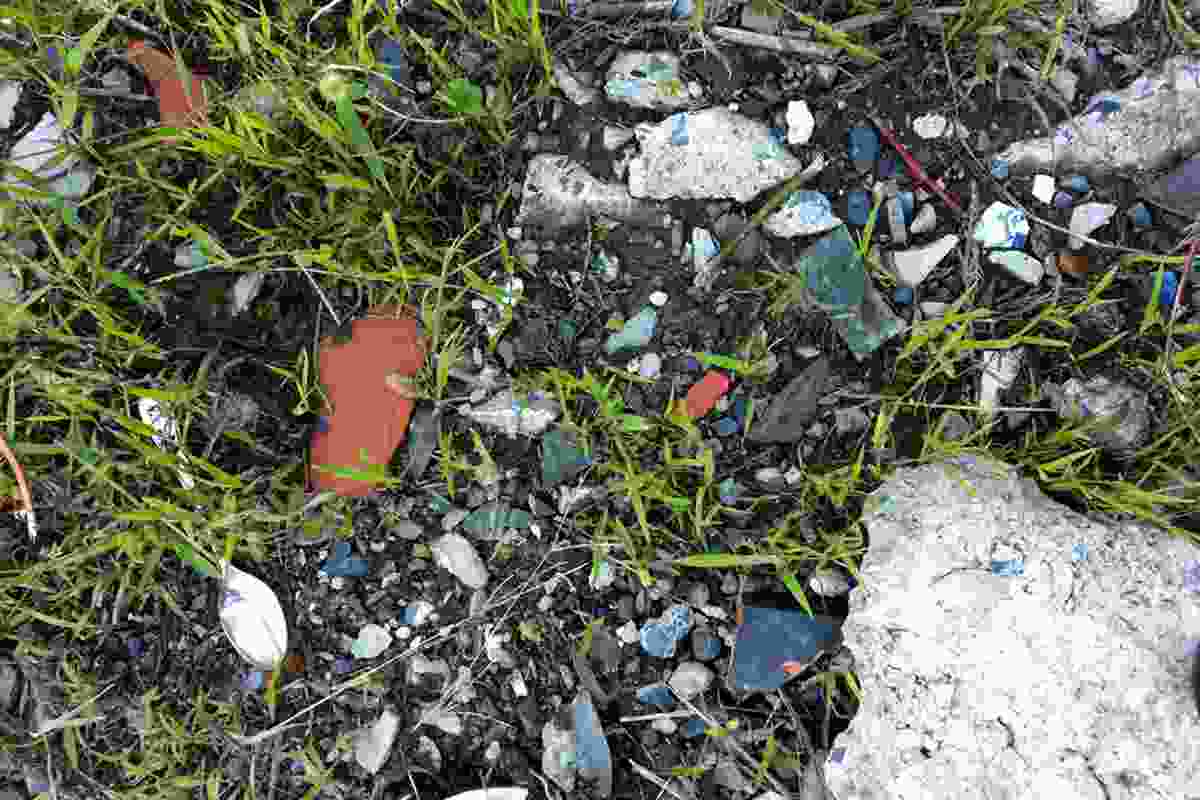 The town is gone but hints of the lives lived there remain in the rubble. 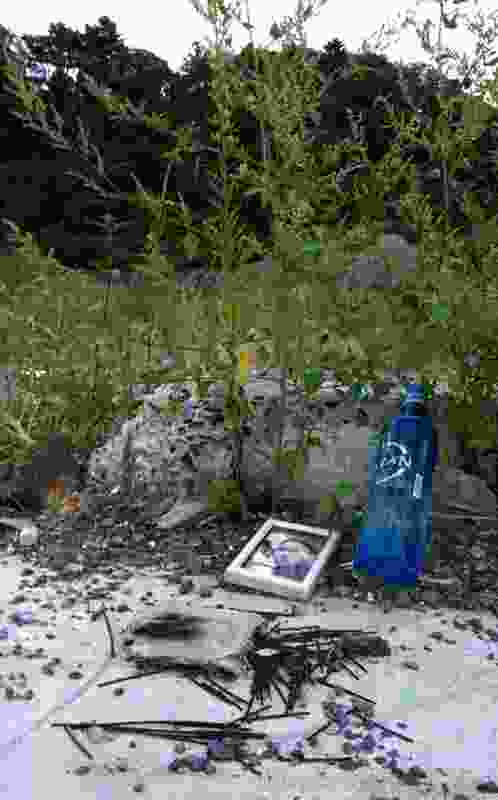 A photo, incense, and Japanese liquor form a makeshift shrine. 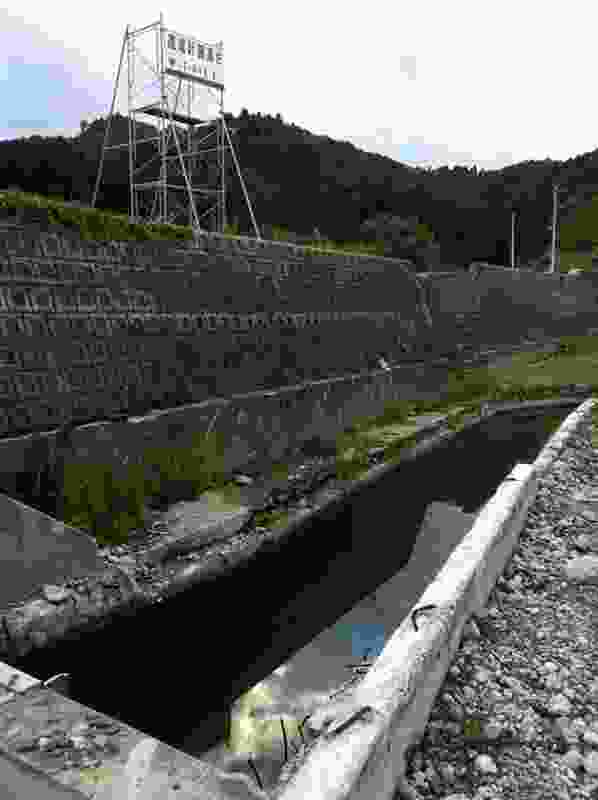 A tower erected to show the height to which ground level will be raised. 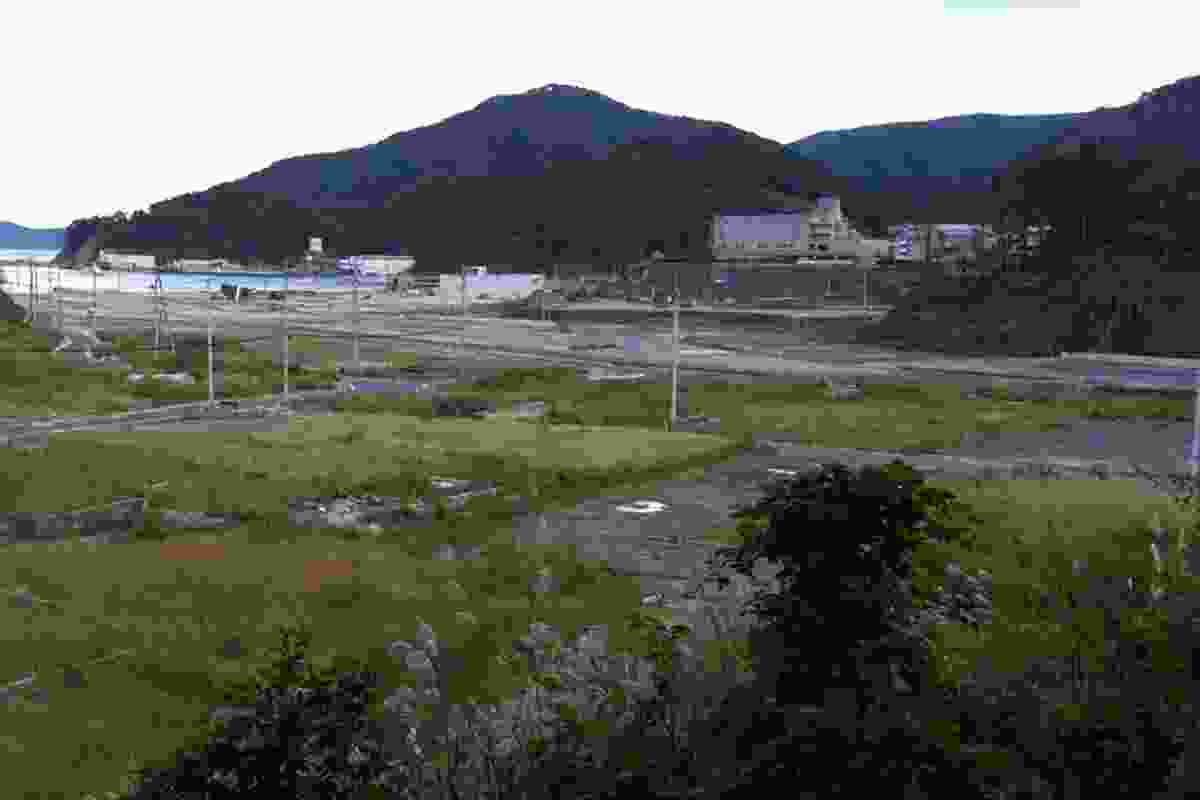 The valley where Onagawa once stood. 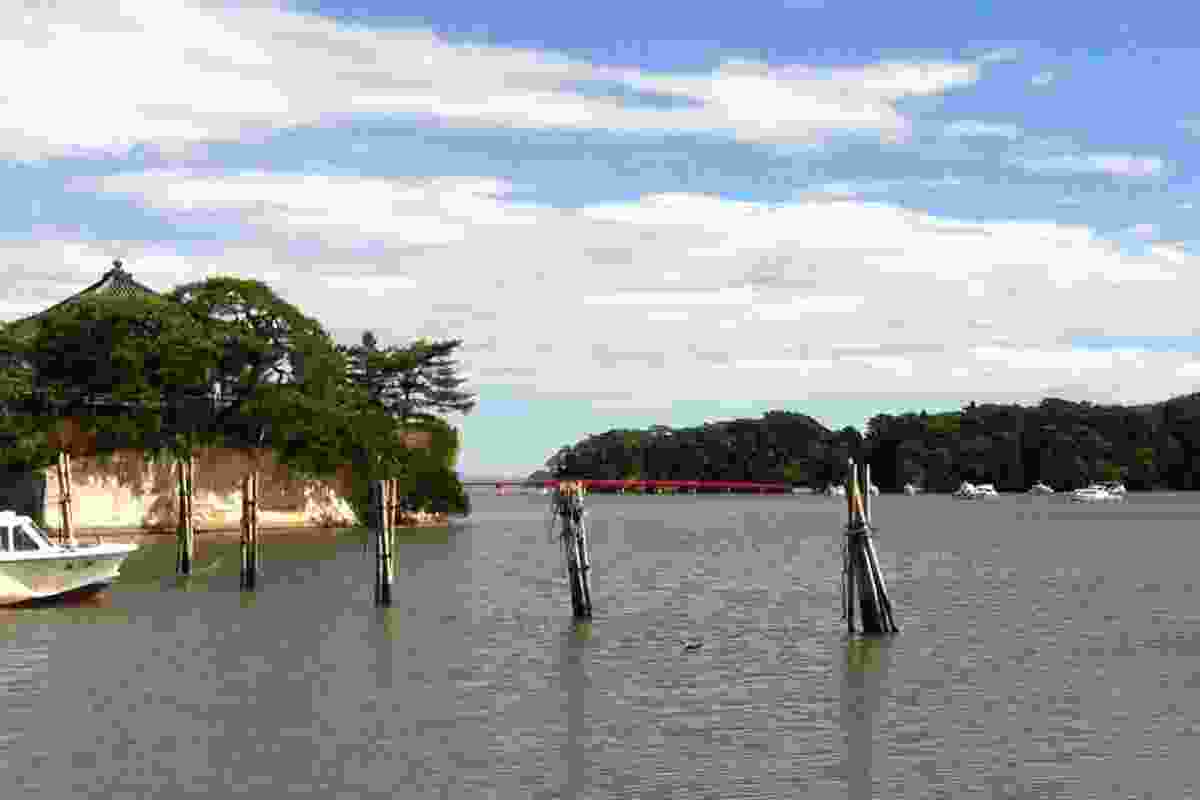