The MTC Theatre and Melbourne Recital Centre project was successfully procured through an interactive tender process, an unusual model for government work. Graeme Kaye of Major Projects Victoria outlines the process and the rationale.

Right from the beginning, back in 2002, it was clear that the Melbourne Recital Centre/MTC Theatre project was unique. With no appropriate music venue between the 2,600-seat Hamer Hall and smaller venues such as the 330-seat Melba Hall in Royal Parade, a new recital hall was needed to fill this critical gap in Melbourne’s cultural infrastructure. In addition, the Melbourne Theatre Company had been searching for a new home since the closure of their theatre in Russell Street in the early 1990s.

The State Government appointed Major Projects Victoria (MPV) as responsible for the delivery of the project. Project managers were briefed, architects and acousticians were engaged and the process to design and deliver the project began in earnest. A large and diverse group of stakeholders was consulted and the design began to take shape. Stakeholders included Arts Victoria, the MTC, the University of Melbourne, The Australian Ballet, the City of Melbourne, the ABC, the Victorian Arts Centre, the Victorian College of the Arts and a number of individual performing artists.

The next big issue to tackle was how best to deliver the project. What delivery model would best suit this complex project? A number of factors influenced the decision, including:

The decision was made to continue the design process while deliberating on delivery and procurement models. It was determined that the design would be substantially complete by the time the head contractor was appointed; however, the procurement process should be structured in such a way that their input could be sought and incorporated during the process. This meant that contractor(s) would work with the design team during the detailed design stage to resolve design and buildability issues.

This process had a number of important benefits for the project. These included the following:

Historically major public projects have been delivered under fully documented lump sum contracts. Over the past ten years this has been found wanting and MPV has devoted significant effort to developing newer delivery approaches, which are more suited to the complexity of modern construction. Lump sum delivery model was considered, along with others, during the evaluation process. Other models considered included managing contractor, construction management, design and construct, negotiated, guaranteed maximum price and alliance.

Following an intensive evaluation, and taking into account the complex nature of the project, the decision was made to deliver the project under a design and construction model, with a guaranteed maximum price. It was felt that this form of delivery would afford the project team the best opportunity to achieve the key non-negotiable quality standards within a controlled price.

The procurement process to select a head contractor to manage the delivery of the design and construction of the project is summarized below.

Stage 1: Expression of Interest
A request for EOI was sent to thirteen appropriately qualified contractors on the government panel, seeking information about their organizations, their experience and expertise, their methodology, their key personnel and project teams, and their expertise on similar projects. Assessment criteria were heavily weighted towards the project team and towards the individual qualities of the project team members.

Stage 2: Shortlist
A shortlist of five contractors was compiled following the assessment of the EOIs, with the successful organizations proceeding to the next stage.

Stage 3: Information exchange
Shortlisted contractors were requested to submit information on a construction management plan and program. They were also asked to tender on profit and off-site prelims (such as staffing, site accommodation, insurances, et cetera) based on the construction budget. Documentation, including cost plan, was issued to tenderers for information and comment.

Stage 4: Request for Tender
The selection process reduced the field to two contractors at this time. The successful tenderers participated in a process (separate from each other) of evaluating and identifying design improvements while working towards a Guaranteed Maximum Price (GMP). The aim of the process was to work with the contractors to test the design and look for buildability savings.

Following the completion of this procurement process, Bovis Lend Lease was selected to deliver the project.

To those outside the project, the process may seem rather long and complicated. However, time and the successful completion of the project have shown that it was worth the effort. Feedback from all concerned confirms that the interactive tender process was a key factor in the success of the project. The process gave all participants a better understanding of each other, their respective roles, the project complexities and why decisions had been made that led to the design as it stood. It allowed all concerned to contribute to providing the best possible solutions that responded to the brief and enabled the project to be delivered ahead of time and under budget.

All in all, a great advertisement for the collaborative approach to the successful delivery of all projects.

Graeme Kaye is a project director in the Department of Innovation, Industry and Regional Development Major Projects Victoria. He was the project director for the MTC Theatre and Melbourne Recital Centre. 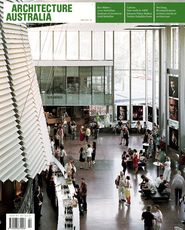