A composition of Washington palms perforates the paved area at the entrance to the pool.

Design has always been about fashion. However, in the last ten years the image has dominated and changed design discourse fundamentally. The early 2000s saw a surge in themed design books about project types such as infrastructure or bridges. During this period theory was unpopular, so these themed titles were not discussing projects as site-specific responses, precedents or typologies from which strategies could be learned, but were compilations of decontextualized images. As digital cameras and mobile devices connected to the web and media-like blogs, this abstraction process continued to become a globalization of design imagery, and “reference image” literacy became a sign of relevance or even good taste. Thus, it could be expected that a project in Sydney would be comparable to one in say, Barcelona. But places are different, aren’t they?

Sydney’s Prince Alfred Park is a good place to examine this question because it is both generic and specific. The 7.5-hectare park in Surry Hills, which has recently been reinvigorated by Sue Barnsley Design and Neeson Murcutt Architects, successfully includes almost all the major trends in international landscape design, including a green roof, landscape infrastructure, water-sensitive urban design and multi-use elements for cross programming, but does so in a way that locks into its site as a highly specific situation, with a unique history and context.

Richard Aitken and David Beaver addressed this dynamic between the international and the local in an article they wrote about Prince Alfred Park, published in the Australian Garden History journal (vol 1 no 3). The article discusses the park’s transition from agricultural land in the mid-nineteenth-century, when it was called Cleveland Paddock, to its development for the Metropolitan Intercolonial Exposition of 1870, designed by architect Benjamin Backhouse. The park is discussed in relation to nineteenth-century global trends in parks, such as them being sites for spectacular exhibitions, greenhouse technology, and the incorporation of the “iron horse,” or railway, in parks such as Parc des Buttes Chaumont in Paris by Jean-Charles Adolphe Alphand. For Aitken and Beaver, Prince Alfred Park’s incorporation of global trends is seen in “machine age symbolism,” in the use of lights and the park’s adjacency of the railway line. But he argues that in these terms the design is flawed, due to its shape and it being interrupted by the school on Cleveland Street, which prevents it from having a promenade. The dynamics of the site – the result of the paddock being cut by a railway line – disrupts the park’s potential to link Sydney to international trends.

I would argue that it is this odd shape that gives the park an interesting circulation, and opens it up rather than simply fringing it as a perimeter promenade might have. From the south-west corner the topography sweeps a wide path down into the park, overlooking it, and separating the intense activity adjacent to the railway from the familiar historical grass and tree park to the east. As an effect of the amalgamation of South Sydney Council with the City of Sydney, and the gentrification of nearby Redfern, this new promenade is very active, and is an important piece of the new bike link between the city and the inner west.

The program on the site is arranged along the railway line and to the corner of Elizabeth Street and Central Station, perhaps symbiotically with the activity along the adjacent railway line.

The question “what are parks for?” has always been difficult, particularly due to the emphasis by modernism on program, which is evident in the adage “form follows function.” Correspondingly, sport and fitness activity provides a clear program that landscape architecture can hold onto. In contemporary design discourse, program has also been a rich source of design generation, where there is a hybridization of programs that produce ambiguous functions that offer multiple uses. In contrast to this, the design for Prince Alfred Park takes an infrastructural approach to program, where programs are organized in relation to each other and to circulation, but where they are autonomous of each other, which is of course logical in terms of the ability of these programs to function as real sport rather than improvised adult play. The program on the site is arranged along the railway line and to the corner of Elizabeth Street and Central Station, perhaps symbiotically with the activity along the adjacent railway line. These activities include tennis courts, fitness stations, playgrounds, basketball courts, an activity centre for yoga and a new pool. The emphasis on activity is one that comes from the history of the site and from contemporary council recreation planning, which is working hard to ensure access to exercise options for city residents, demonstrated by other recent leisure centres including the Ian Thorpe Aquatic Centre in Ultimo.

Though the two areas separated by the path – the sports park and the historic park – are quite different, they are unified by an eclectic approach that skews the international trends in a decidedly local direction. The Sydney foreshore projects that have recently won international acclaim can be seen as local examples of an international trend of post-industrial projects, such as Landschaftspark Duisburg-Nord. However, their means of engaging with the local tends not always to valorize the epic or muscular archaeology but instead to find fine-grain relationships with overlooked traces or material fragments. Like much Australian film, Australians have an obsession with things that seem trivial, even daggy to outside eyes. This can be clearly seen at Cockatoo Island in JMD Design’s engagement with municipal details but gets a new twist at Prince Alfred Park as the design uses historical reference and collects diverse approaches to detail together in a nonetheless integrated way. While I could argue that this too reflects an international re-interest in postmodernism, it is done here with greater sophistication and less heavy-handedly than it was during that period. This contemporary eclecticism is in itself a reference to the eclecticism of the Victorian period when the site was first developed, when exhibitions such as that held on the site in 1870 comprised collections of disparate curiosities.

The path is overhung by numerous light poles that use a standard luminaire. Each light pole features an arm that angles up or down, like a flamingo’s neck, which, with the topography, make the path a three-dimensional tube that one moves through and looks down onto from Cleveland Street.

The redesign of the park includes a number of areas of grassland, a local instance of a trend towards perennial or naturalistic planting. One of these areas is on the south edge along Cleveland Street, while the other is the planting treatment on the “green roof” of the new pool building. Though this grassland is currently made up of indigenous species, in order for it to sustain itself and survive it will have to become rambunctious – a term Emma Marris uses in Rambunctious Garden: Saving Nature in a Post-Wild World (New York: Bloomsbury, 2011) to describe cosmopolitan ecologies that regenerate.

Before the railway or the 1870 exhibition, the site was called Cleveland Paddock, and the grassland on the south edge, overlaid by figs that remain from the nineteenth-century design, is now called Prince Alfred Park Meadow in reference to this earlier land use. This edge – the only piece of amenity on Cleveland Street – is magical. It features a pair of seemingly directionless crossed axes of existing trees, one planes and the other brushbox, and is now without paths; relics of a presumably disappeared circulation system. At the space between and at the end of them, arcs of benches and barbecues create some sort of punctuation to the crossed axes. The edge of the meadow has a narrow path where it meets the broad swathe of grass in the centre of the park, and its elevation makes them the best seats in the house. The view of the city is panoramic and the courts at its base with their lights give it a sky-blue edge.

The pool building on Chalmer Street also has a green roof. This sophisticated building’s covering with vegetation was a requirement of the brief – the client was adamant the park was primarily a “green” space and wanted the building to be somewhat camouflaged. An embankment that creates a bowl with the pool at the centre mirrors the angled green-roof plane. Vents rise out of the green roof, which has a 1950s Brighton resort feel because of its colours, and is at the same time slightly high-tech, perhaps Richard Rogers meets Humphrey B Bear. This whimsical air is continued in the use of umbrellas on the pool bank, a Martha Schwartz moment that cannily provides shade without a monumental structure, allowing user customization.

Like the Metropolitan Intercolonial Exposition of 1870, Prince Alfred Park is an odd collection of styles. While the elements that make up the project might seem generic, perhaps faddish, their eclectic combination reflects a very particular and detailed response to the site that is ultimately, for me, the project’s most interesting aspect; it responds to the nuances of found planting arrangements, redirecting axes and resurrecting drainage patterns. As much as the project wheels out all the hip stuff of contemporary landscape design, it also tunes them to the site in a meaningful way.

At the 2014 NSW Architecture Awards Prince Alfred Park + Pool upgrade won the Sulman Medal for Public Architecture, The Lloyd Rees Award for Urban Design and was a joint recipient of the City of Sydney Lord Mayor’s Prize. 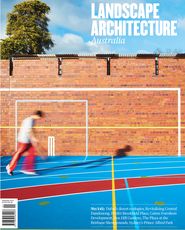 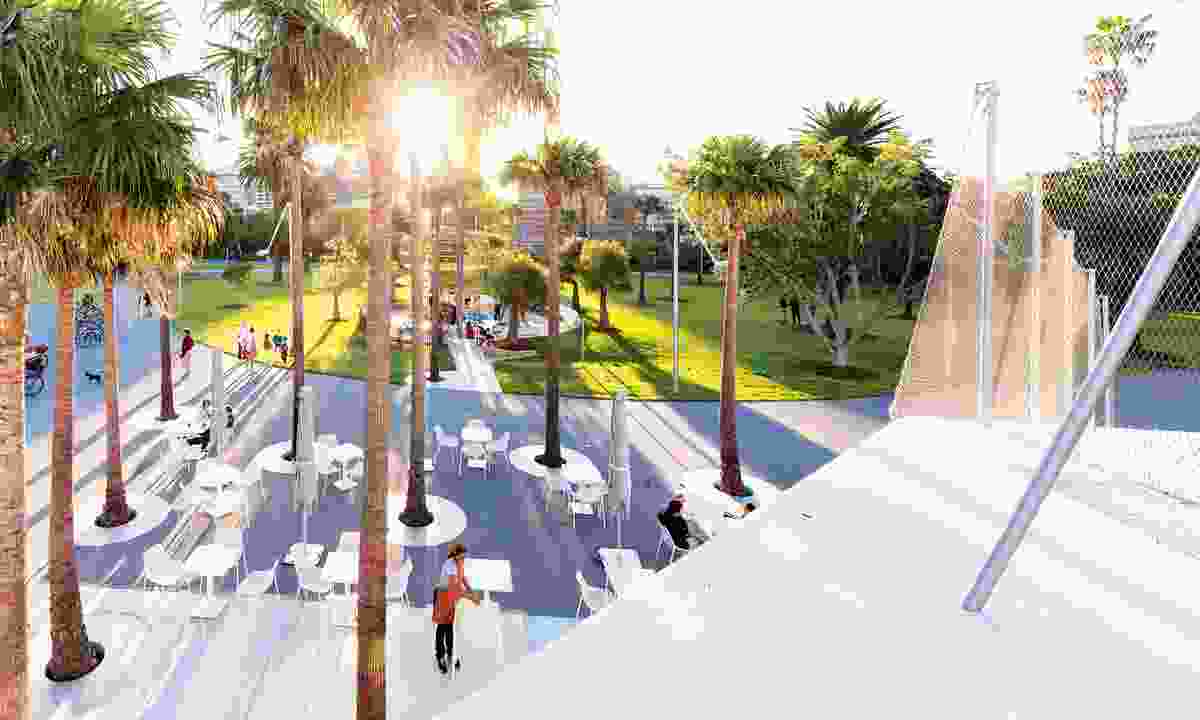 A composition of Washington palms perforates the paved area at the entrance to the pool.

A flexible grid of yellow unbrellas provides shade without the use of a monumental structure. 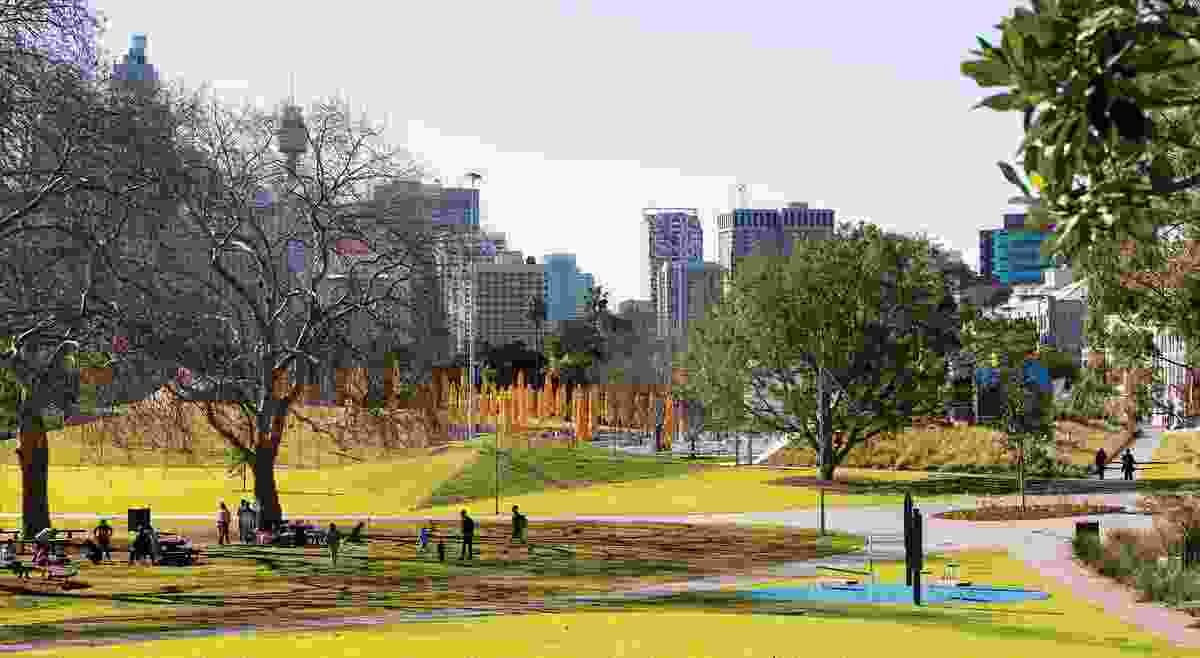 The faceted roof of the Prince Alfred Park pool appears to fold from the landscape. 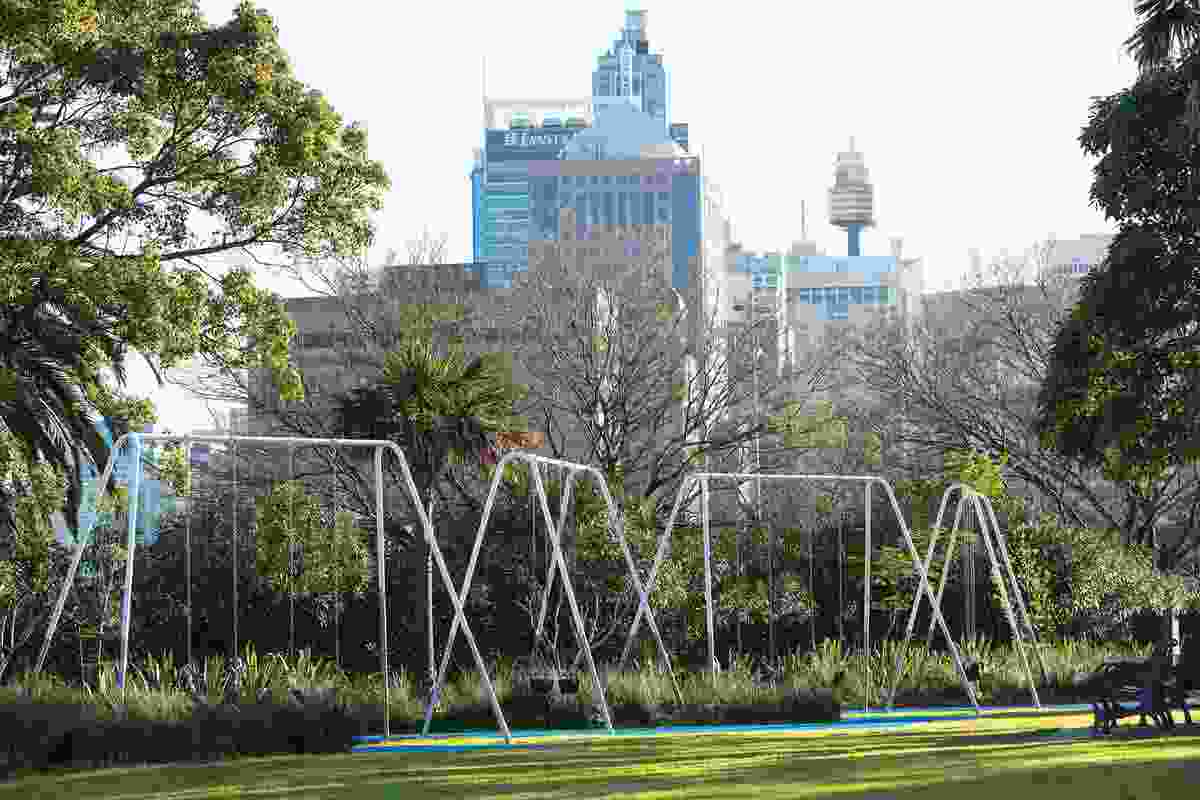 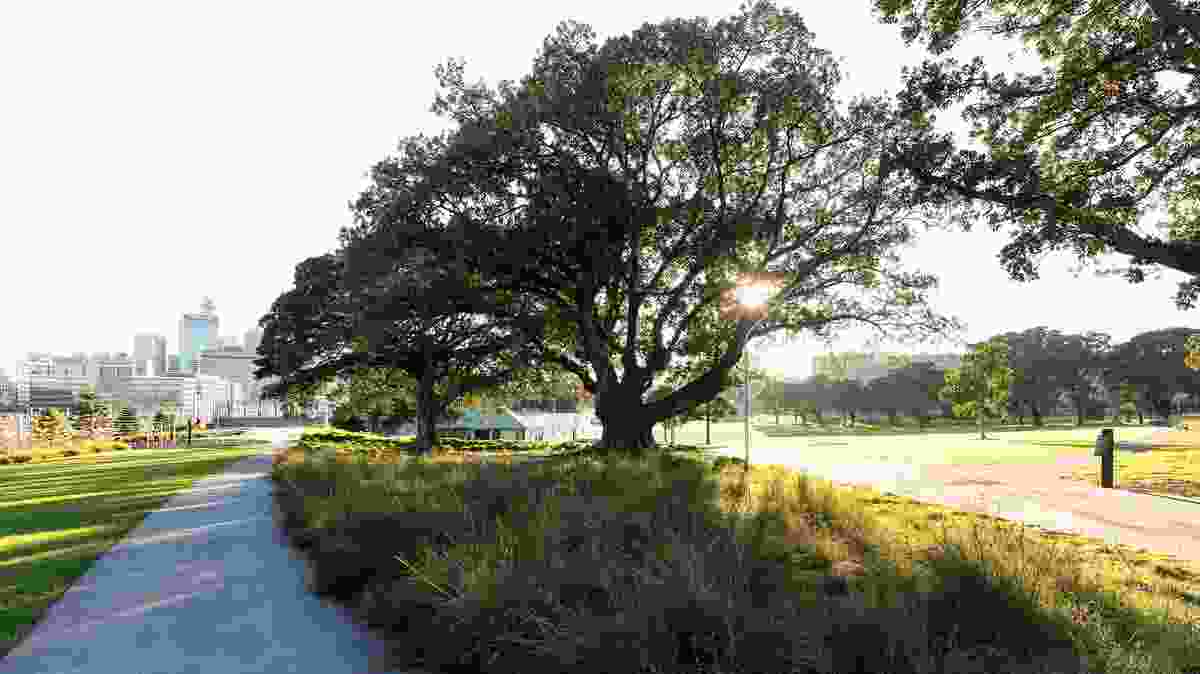 The edge of the meadow has a narrow path where it meets a broad swath of grass. 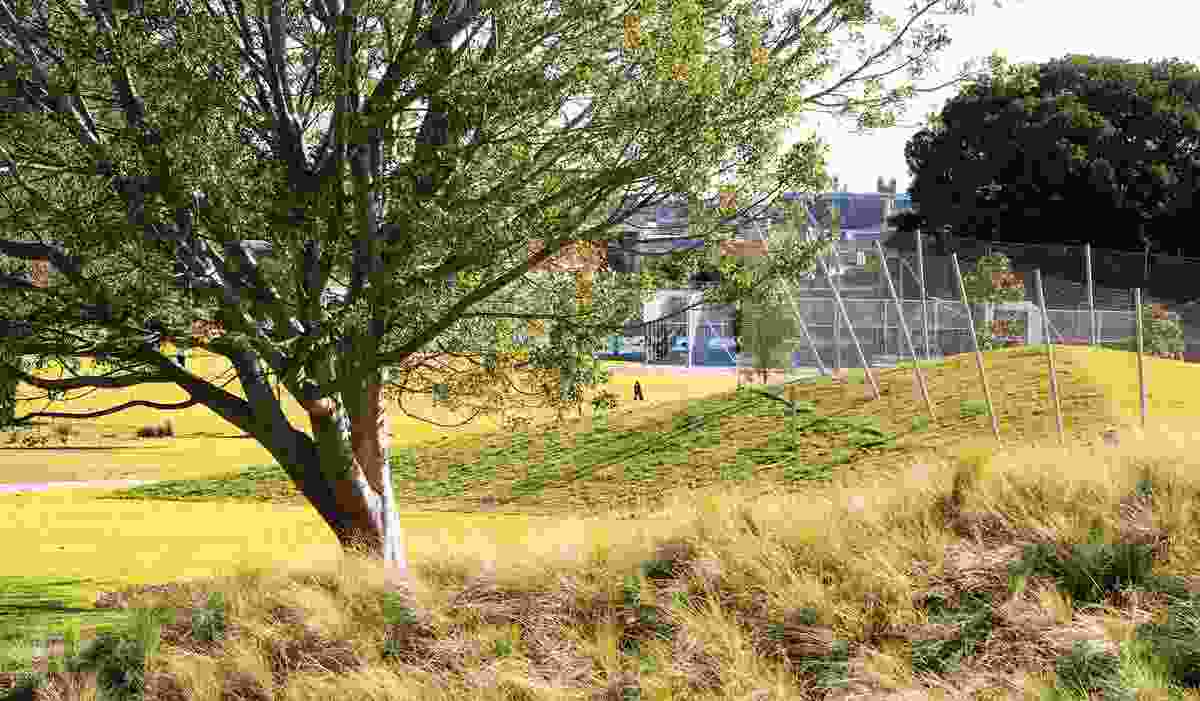 The planting treatment on the “green roof” of the new pool building features indigenous grasses. 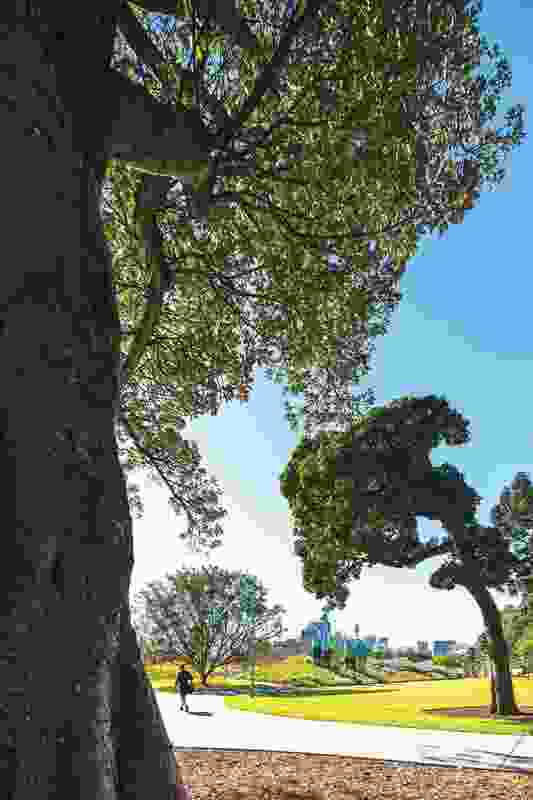 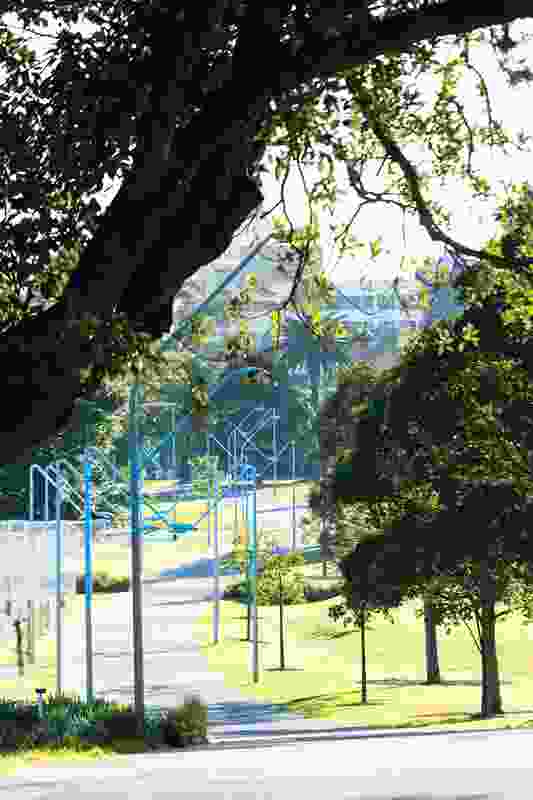 Streetlight poles at Prince Alfred Park each features an arm that angles up or down like a Flamingo’s neck. 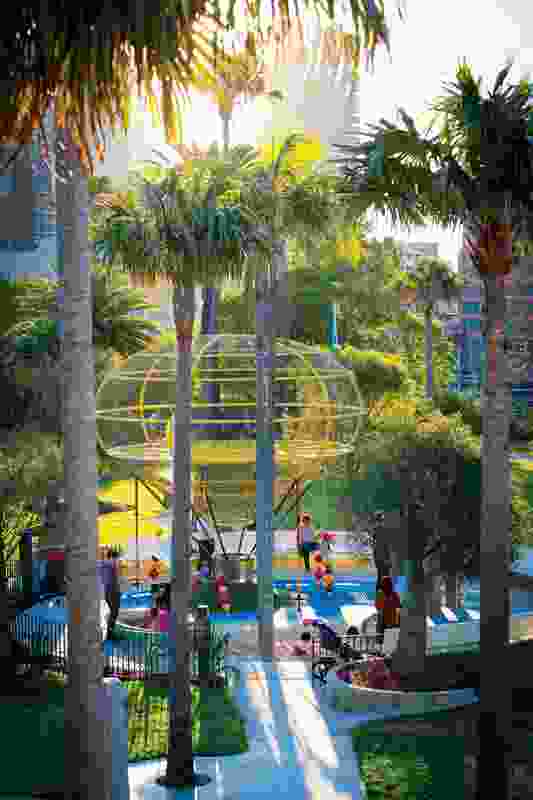 A circular play-ground caters for the park’s younger visitors.