The thoughtful body of residential work by Matt Gibson Architecture and Design demonstrates an enthusiastic and rigorous approach to the dualism inherent in many projects.

Matt Gibson and his team in the practice’s Collingwood studio.

As I listened to Matt Gibson and Martyn Weaver of Matt Gibson Architecture and Design, it struck me that recognizable patterns emerge from within almost all of their projects, forming a narrative thread through the catalogue. While remarkably consistent across that catalogue, these repeating patterns unfold within each project in a different way. Matt Gibson Architecture and Design is a practice built around the exploitation of dichotomies. This is hardly a searching insight; Matt himself says as much when describing the firm. What is surprising is the rigorous consistency of this idea as it emerges from within the practice’s folio.

Many of the projects undertaken by the firm over the last decade and more have been renovations and refurbishments of terrace houses, inner-city single- and double-fronted dwellings that were significantly transformed by the designer’s effort and attention. Starting with a historic dwelling out front, the insertion of a new and largely open-plan rear volume ensures that the dichotomy is “hardwired” into the framing of the architectural proposition. This dynamic between an older and often historic existing “front house” and a new, open-plan extension to the rear is the main dichotomy that characterizes this body of work and it was evident in many of the projects I reviewed with Matt and Martyn.

For example, in the Mary Residence in St Kilda, a historic double-fronted two-storey terrace house was reshaped to the desires of a new owner by the rigorous grafting on of new work at the back. The restoration of the “front house” created a series of historically proportioned spaces, with attendant detail and decoration. The transition to the new wing at the rear is marked by a formal and spatial gap. The rear building, abstracted from the proportions of the front facade, frames an extruded interior/exterior space that can be completely opened up by the occupants. A wall-hugging banquette extends from within, emerging through a frameless glazed panel to the exterior and defining the edge of the rear courtyard. An additional side courtyard connected to the gap between old and new allows light into the deep plan, breaking down the sense of containment and constriction that is typical of terrace dwellings.

The Abstract House also exemplifies this pattern. Again, a historic “front dwelling” was retained and the spaces within restored, along with their elaborate entablatures and other details, creating a series of grand rooms. Behind it, in an interpretation of a clearly articulated planning diagram, an open-plan pavilion has been inserted, once again with an articulated architectural “gap” between old and new. An internal courtyard brings light right into the centre of the plan and displays the rich patina of the party wall, its textured brickwork standing in stark contrast to the crisp d etailing and spatial definition of the new pavilion.

The Abstract House demonstrates another critical element of the Matt Gibson approach, a clear circulation spine connecting front and back. In fact, you can open the front and back doors of the Abstract House and see straight through from street to courtyard. In this case, the circulation spine is on the alignment of the central hallway of the historic house, but in other projects it falls off-centre.

If anything, the Courtyard House interprets the new/old, front/rear, interior/exterior dichotomies with even more enthusiasm and rigour. The Matt Gibson team exploited the existing conditions of this rundown dwelling in order to build hard up against the side and rear boundaries, framing a large courtyard that separates the open-plan living spaces from the main bedroom suite. Along with an additional light court, the courtyard extends internal spaces and provides surprisingly rich cross views. The strongly defined circulation spine connecting old and new emerges once more, this time along the eastern boundary.

Looking beyond this initial understanding of the duality of the design proposition and the dwelling – the old/new dichotomy in particular – each project is characterized by an overlay of smaller, architecturally expressive dichotomies that apply to different parts of the design. Sunlight and darkness, heaviness and lightness, the rustic and the pristine – all play their part. Perhaps the most significant of these is the fluid movement between interior and exterior.

In the Kooyong House, as in the Mary Residence and the Abstract House, there is an extension of interior space from the ground plane of the new open-plan rear part of the dwelling out into a tightly and formally contained courtyard. The courtyards in houses by Matt Gibson are often an extrusion of the architectural and spatial frame of the new constructions. Here, the seamless transition between interior and exterior is reflected in the detailing of the door and window tracks, a signature detail developed with the manufacturer to ensure that whole glass walls dividing interior and exterior can disappear as the occupant desires. Kooyong House is the perfect example of this, but it applies to many of the firm’s other projects as well.

In all these projects, the essential architectural proposition involved the articulation of a newly defined, open-plan rear pavilion in relation to an original, often historic, front building. The rigour with which this is pursued is admirable, but something interesting happens to the approach when a project arrives that is not based on this pattern.

The Concrete House is a departure for Matt Gibson. In this case, the entire dwelling was a new build with no new/old dichotomy to rely on. What happened is revealing in that the designer sought out a new kind of dichotomy – one based on formal and spatial relationships. The contrast in the Concrete House is between the contained, hovering upper form (the big concrete-framed box) and the less contained, open-plan lower building. So even in this project, the pattern remains consistent – the project is still founded on an overarching dichotomy, just one with a different makeup.

There are an infinite number of variables in the construction of an architectural oeuvre and in a designer’s lifelong search for essential architectural expression. In the face of such overwhelming abundance, the thoughtful and rigorous reduction of repeated architectural propositions to just a few factors is to be applauded. Far from limiting the life’s work of the designer, it allows enormous variation to emerge from what are, ultimately, self-imposed and disciplined constraints. The practice of Matt Gibson Architecture and Design is constrained in such a way and the work is all the better for it. 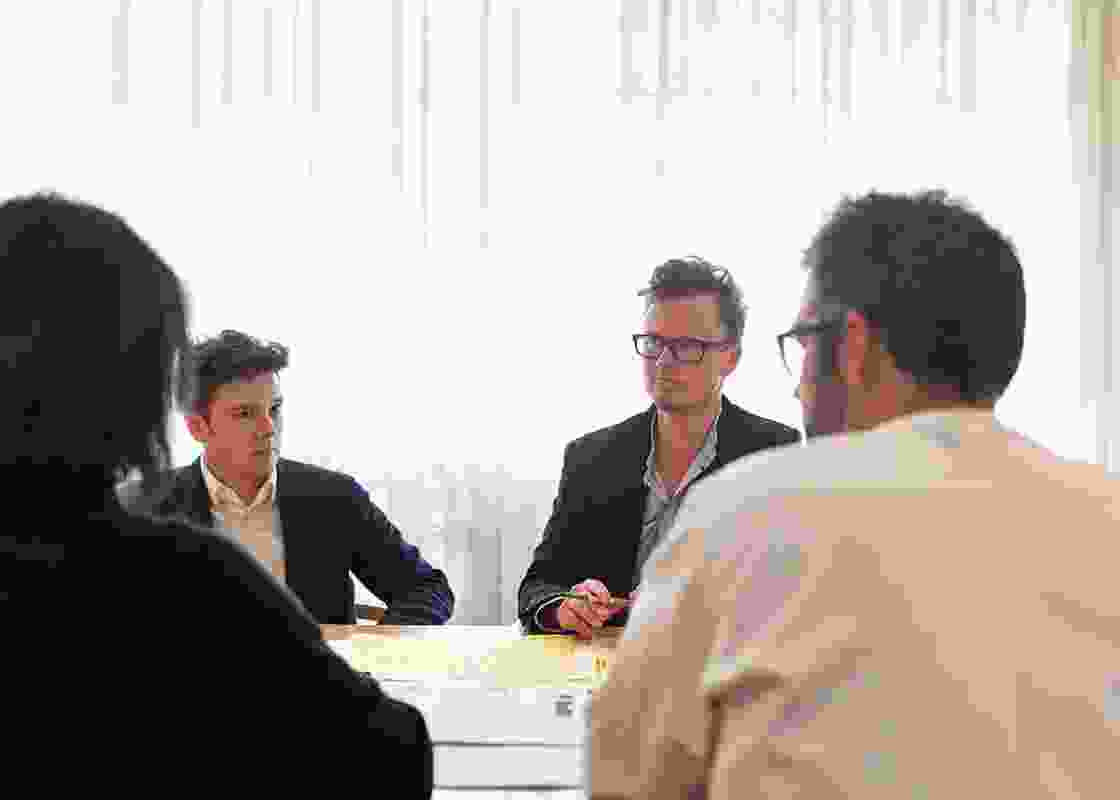 Matt Gibson and his team in the practice’s Collingwood studio. 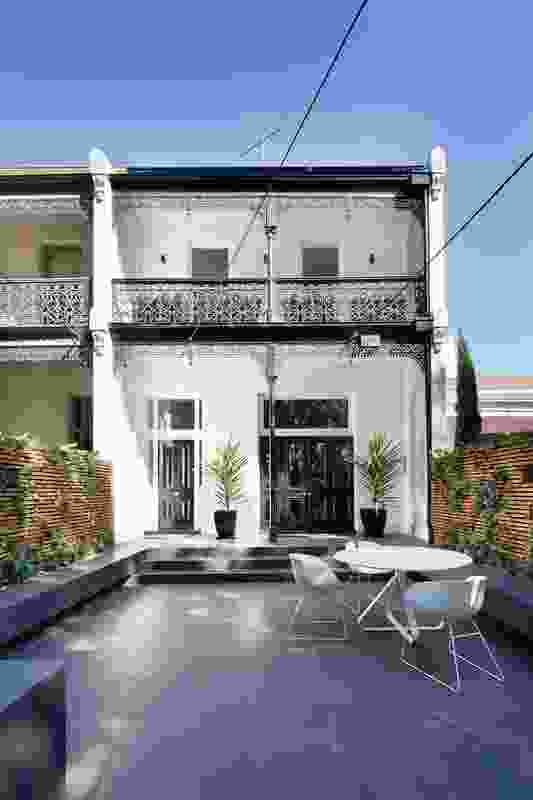 At Mary Residence, a historic double-fronted two-storey terrace was retained and restored. 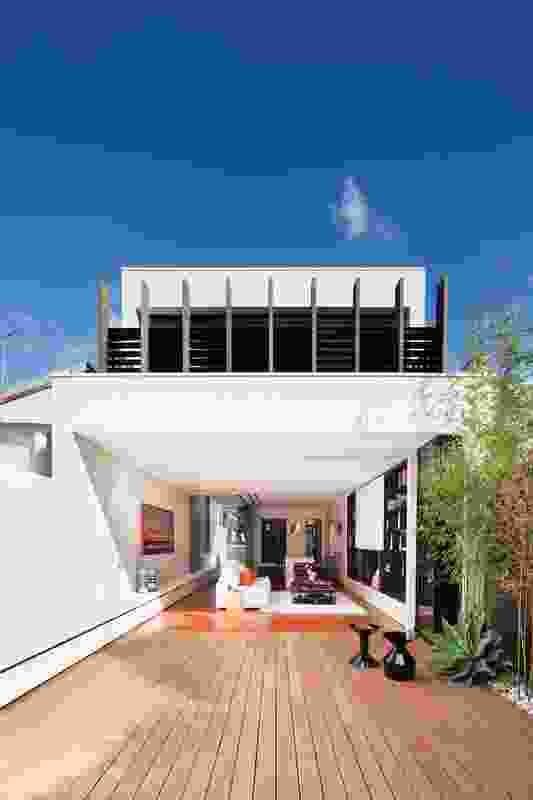 A new, open-plan extension was abstracted from the proportions of the Mary Residence’s front facade. 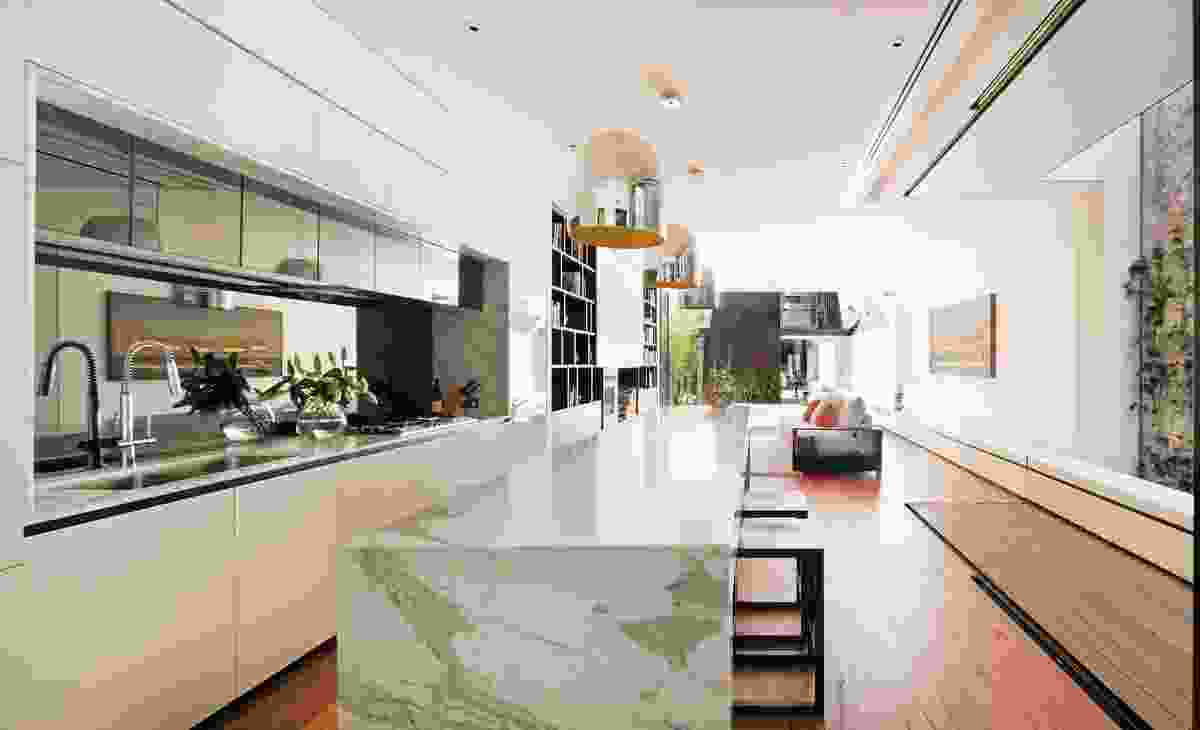 A narrow side courtyard allows light into the deep plan of Mary Residence and connects old with new. 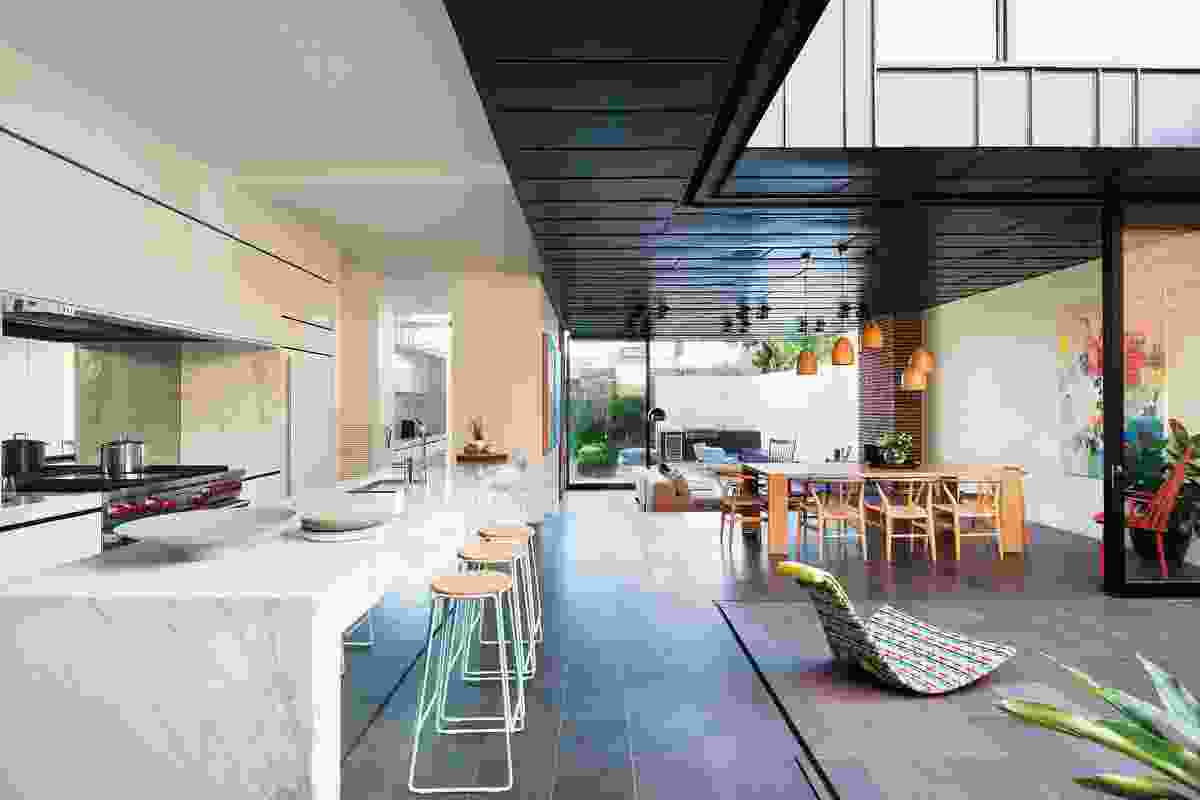 A new pavilion at the rear of Abstract House is connected to the existing house via a generous courtyard at the centre of the plan. Artwork: Laelie Berzon, Elastic Heart, 2015. 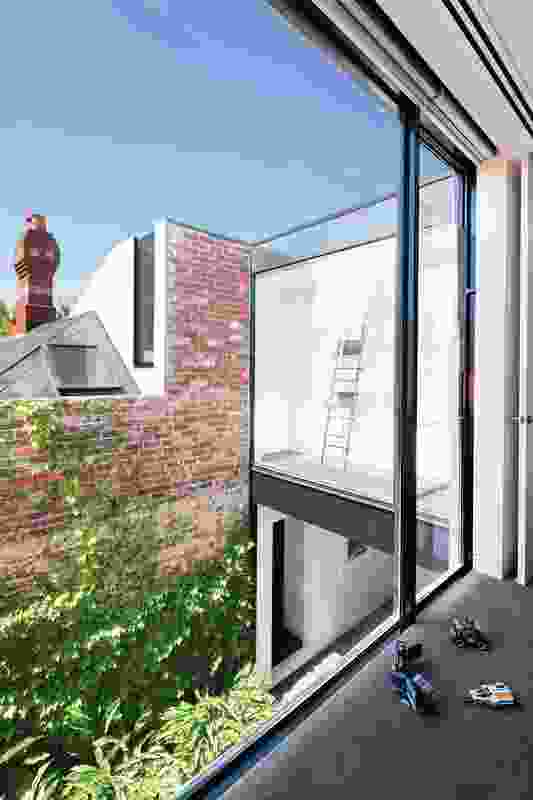 The textured brickwork of the party wall stands in stark contrast to the new work at Abstract House. 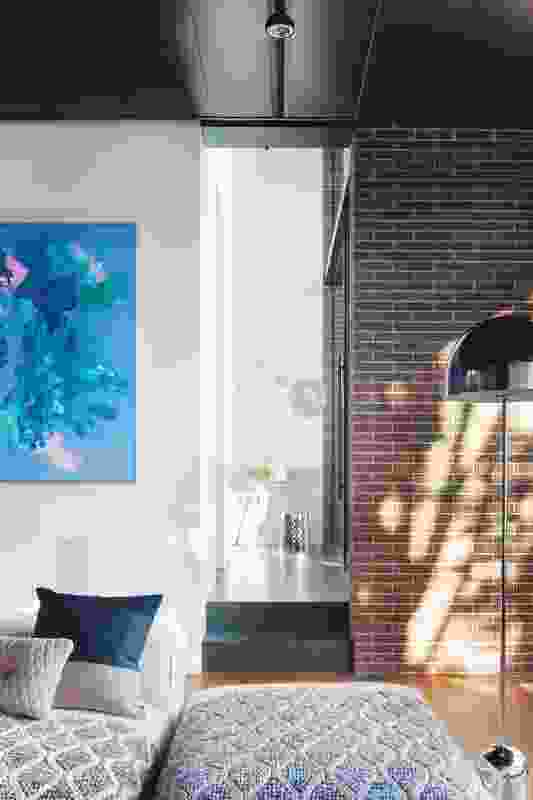 A layering of materials is a defining element of the practice’s work, as seen here at Abstract House. Artwork: Katie McKinnon, Mosaic Leatherjacket, Snapper and Sea Lettuce, 2015. 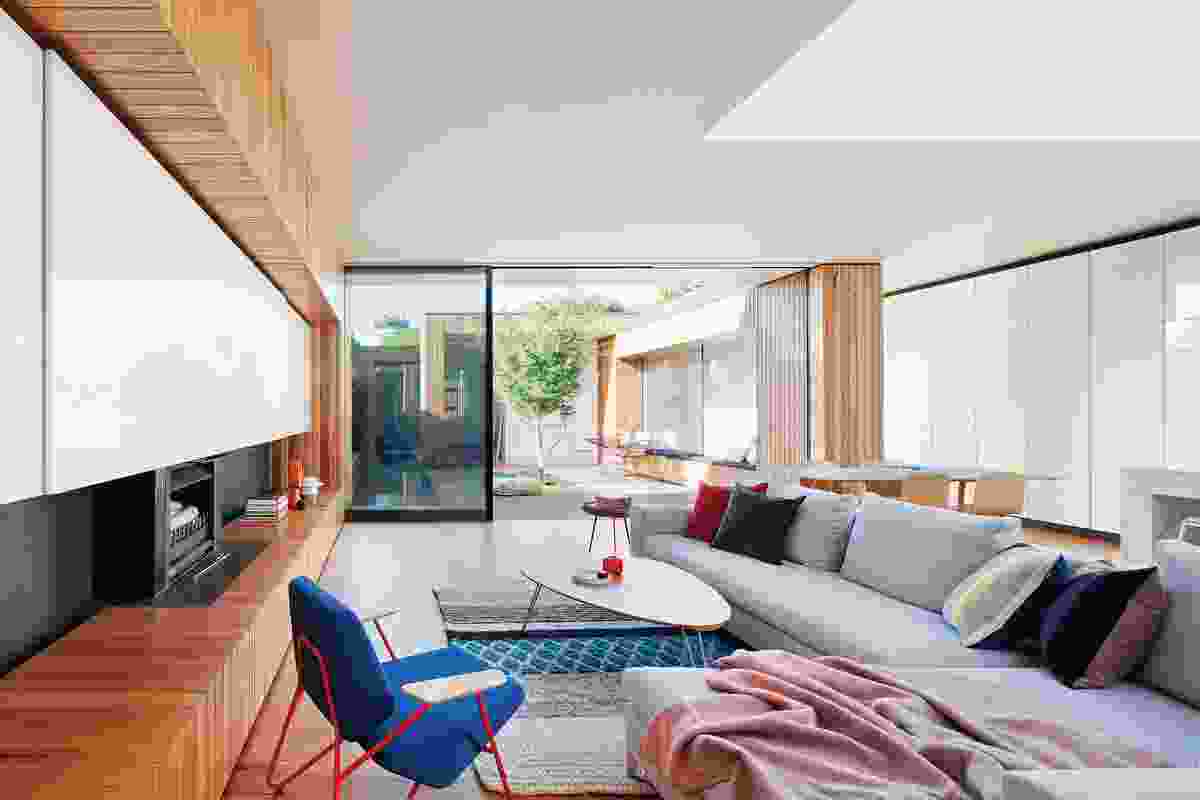 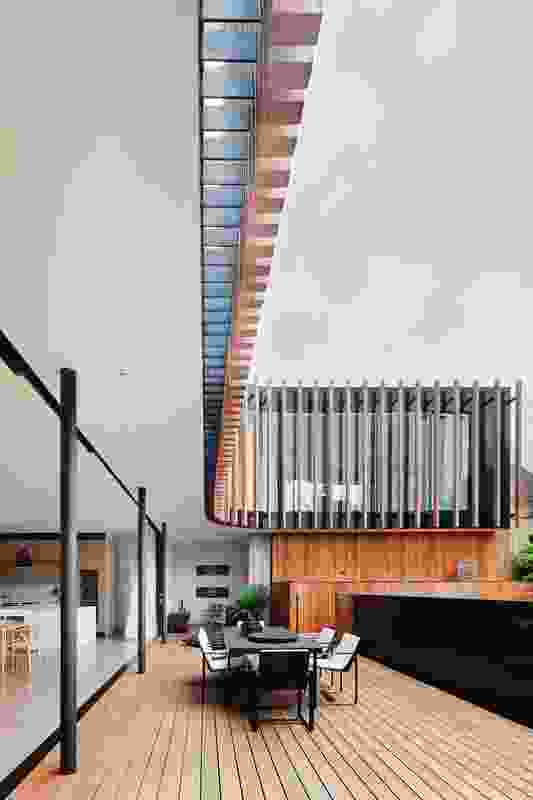 Signature detailing of the door and window tracks, developed with the manufacturer, ensures that boundaries between inside and outside are blurred at Kooyong House. 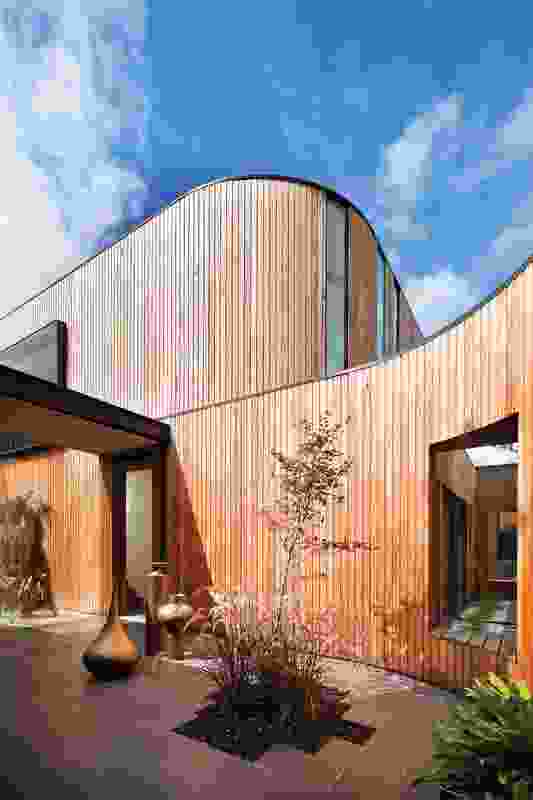 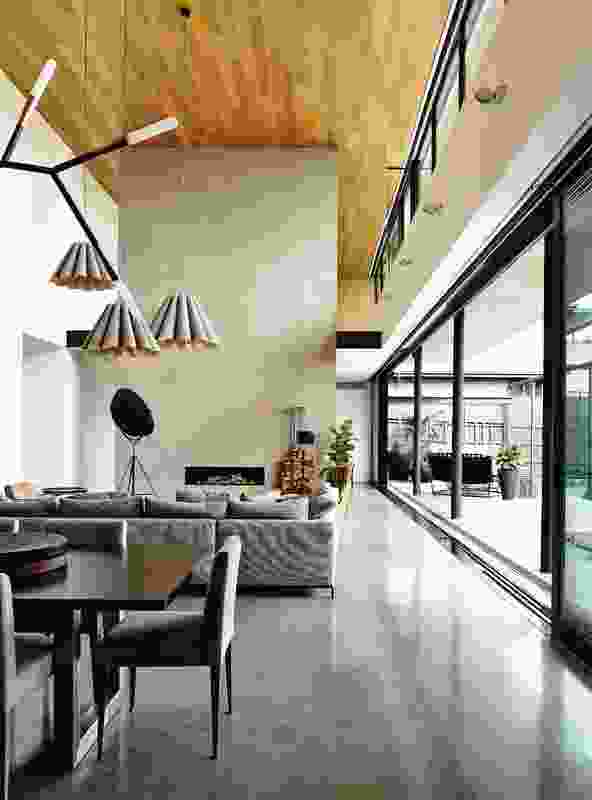 Although Concrete House was a new build, the practice approached it in a similar way to alteration and addition projects. 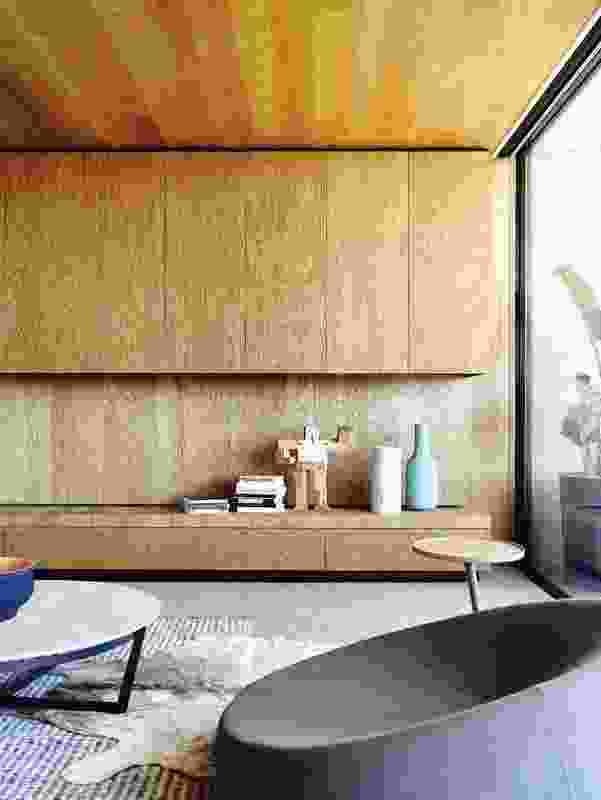 Joinery details at Concrete House are consistent with the architectural intent of the dwelling. 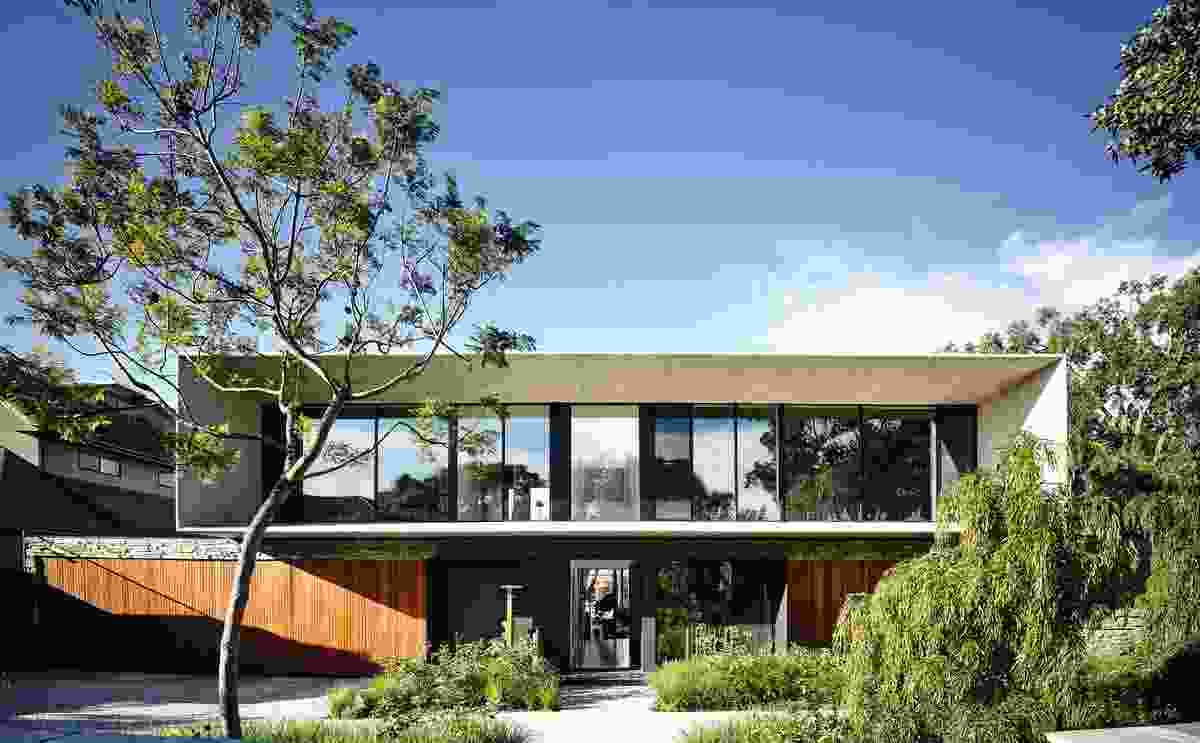