The National Institute for Dramatic Art at Kensington, Sydney, is being redeveloped by Hassell with Peter Armstrong to provide a stronger street address and a new focus for the campus. The scheme includes a major foyer with a glass wall along Anzac Parade, a glazed vestibule leading to the existing school, workshops, a sound stage, a directors’ theatre and a 750-seat performance hall. The hall will occupy the foyer as a sculptural object, and will be wrapped with a ‘veil’ shielding galleries, control booths and other facilities. The veil has both solid and translucent sections and will filter fresh air through the public spaces. At night, it will be dramatically illuminated.

SYDNEY: WHARF 8 OVERSEAS PASSENGER TERMINAL
Working to ‘savage’ budget cuts by the Sydney Ports Authority, Jackson Teece Chesterman Willis has refurbished a cargo shed at Wharf 8, Darling Harbour, to relocate the city’s temporary overseas passenger terminal from Wharf 10. Because ships berth on less than 50 days a year, it also serves as a function centre. The main intervention is a large blade awning which marks the south entrance and screens western sun. The graphics were produced by AA’s designers, Holliday Martin. Photo Bart Maiorana.

KUALA LUMPUR: WATER GARDEN
A Kerry Hill-designed residence in Kuala Lumpur is complemented by a Martin Palleros landscape including this 25 metre swimming pool, surrounded by a similarly black water garden. Palleros is an Argentinian, Florida-educated, architect-landscape architect who now bases his pan-Asian practice, Tierra Design, in Perth. He is working with Hill on Amanresorts at Margaret River, WA, and Curtis Island, Queensland, and significant urban design and residential projects in Perth, Singapore and Thailand. He shares the Perth office with Andrew Lian,a UWA architecture graduate who was a colleague in Singapore during the mid-90s. 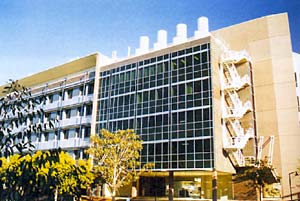 SYDNEY: AUSTRALIAN TECHNOLOGY PARK BIOMEDICAL BUILDING
At the Australian Technology Park in Redfern, TGP has completed a biomedical building which offers inexpensive facilities to young high-technology companies. The wedge-shaped complex is split into two facades: one denoting offices to the east and the other incorporating sun-screen/catwalks for the western laboratories. The interior is designed for maximum flexibility. On the roof, air handling equipment is exposed. 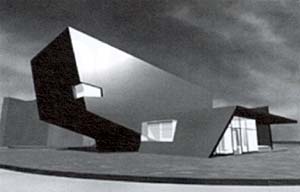 WERRIBEE: LECTURE THEATRE
Morgan McKenna in Melbourne has gone to tender with a 250-seat lecture theatre for the Victoria University of Technology’s Werribee campus. Planned as the first stage of a larger facility which will also include a campus reception wing, assembly foyer and break-out rooms, perhaps eventually becoming a conference complex, this pavilion will provide a new public address to a campus originally masterplanned by Crone Ross. Design architect Michael McKenna says the steel-and-glass design is influenced by Melnikov’s Rusakov Club (1928) and Shinohara’s Centennial Hall (1987).

PERTH: WESTERN AUSTRALIAN MARITIME MUSEUM
White sails will billow from Perth’s Forrest Landing promontory in the Cox Howlett & Bailey Woodland concept going ahead for the Western Australian Maritime Museum. Two local maritime analogies are being projected from the architecture: America’s Cup-inspired sails (also selected by the WA government for Hames Sharley’s Barrack Square belltower) and building forms reminiscent of the clinker-built luggers which were often shipwrecked on the sands of Broome. At the Maritime Square main entry, a proposed memorial wall will lead into the orientation hall. The principal gallery (double-height) will be curved to recall the interior of a giant ship’s hull.

LONDON: BAYSWATER APARTMENTS
On a north London site bombed by the Luftwaffe in World War II and since left vacant, Australian architect Russell Jones is planning an infill block of three two-level apartments. Noting an acute British shortage of tradesmen up-to-speed on the detailing of modernist buildings – forcing up the costs of smart work to prohibitive levels – he has developed a simple system of stack-bonded, mortar-brushed brickwork for the two flank walls; tied together by two expressed precast lintels. Internal finishes will include limestone paving and Douglas fir floorboards, doors and window frames. 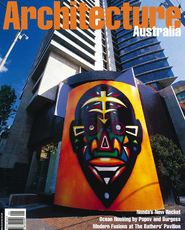