Continuity and evolution in public Sydney

Camilla Block (Durbach Block Jaggers) reflects on the themes of architectural continuity and evolution in the publication, Public Sydney: Drawing the City.

Perhaps we painted on our own skin, with ochre and charcoal, long before we painted on stone. In any case, forty thousand years ago, we left painted handprints on the cave walls of Lascaux, Ardennes and Chauvet. We made our paints from the bones of the animals we painted. No image forgets this origin. The future casts its shadow on the past. In this way, first gestures contain everything; they are a kind of map.1

I have never seen the Caves of Lascaux. From images, I imagine a vast array of paintings, hugging the complex surface of caves. The placement of the individual animals and figures translate the form of the rock, its pigment, shadow and light.

Partial erasure and overlay are endlessly accommodated. Incomprehensible to the eye as a whole, the beauty of these paintings is understood in series.

Some of the paintings are bold, some recessive. One exaggerates the contour for the roundness of a belly, another stands steady on a streak of colour. Partial erasure and overlay are endlessly accommodated. Incomprehensible to the eye as a whole, the beauty of these paintings is understood in series. Rock art is “… constantly overwritten, created through a multiplicity of interventions as a kind of multi-authored collage … A process of accretion through a skilful integration of new marks with previously existing ones…”2

But the whole has something that makes its impression memorable. The cave underlying these works is revealed not overwhelmed, its natural contours determining and present. The variety of the paintings is underwritten by an even-enough painted language that makes for a messy cohesion, not chaos.

How did these painters do this? How did they add in such a way that the whole was not destroyed? What is the quality of the whole that is so accepting, that it allows for so much diversity and change? There is something analogous in this approach to the way in which cities are made, a collective endeavor, made over time. Great cities are made with a sensibility that reveals and coheres, makes new and preserves.

The sequenced drawings in this book of Macquarie Street trace the origin and evolution of the Rum Hospital, Queens Square and the State Library. These plans and elevations are so revealing, so dense, they give us a picture not only of what is, but how we got here. They have the quality of a stop motion film, documenting change, of alterations and additions at a city scale. Topography and street alignment are established and hold steady, a consistent scaffold. Governor Macquarieʼs proclamation of the alignment of Macquarie Street and Hyde Park in 1810, was a profound act of vision and leadership, making a street of sites for our prized civic buildings.

Each built stage is its own beginning. But also, if you look closely, the first form often lives within the next, and gives clues for the next iteration. Built incrementally in kindred architectural languages, staged sometimes by circumstance, sometimes by forethought, this street of buildings is now appreciated whole, but was made in series, in time. Inherited buildings are accommodated, elements are retained, subsumed, remade. Stairs are reused, circulation extended, rooms added, entries shifted.

Some uses are stable, some alter many times. Some pieces are erased, some kept immaculately. Temporary buildings last while edifices crumble. St James Church stays steady, the State Library grows steadily. The wings of Macquarieʼs Rum Hospital, become the Royal Mint and State Parliament, while the centre is demolished for Sydney Hospital. The courts move to the Barracks and then to a tower at Queens Square. A prefabricated iron building, brought to Sydney from Melbourne in 1856, was used as a temporary parliamentary chambers. With an added classical street façade and lined with the packing crates it was shipped in, it still stands today.3

Architecture begins with a way of seeing. Place has many elements, natural and artificial, given and interpreted. The way they are seen and collated, a critical process.

Architecture begins with a way of seeing. Place has many elements, natural and artificial, given and interpreted. The way they are seen and collated, a critical process. What are the innate qualities of a setting, what should be treasured, what could be edited? When designing, these qualities of circumstance are described and translated, locking into a sequence that makes space for the new. What is made intuitively at Lascaux, architects do analytically, systematically and intuitively.

“Context” is our canvas, our cave. It is a source and a resource. Sites are rarely empty. Ignoring their inherent armature is a form of fundamentalism, “a text without context.” Our approach need not be additive, “blending in,” or coercive “the new, separated and pristine.”

As these drawings of accretion demonstrate, civic architecture comes from a suggestive empathy, inclusion of the past, a clearing for the present and an opening to the future.

A launch and discussion of the book well be held on 16 April, 2013, at Tusculum, Potts Point. Read David Holm’s (Cox Architecture) review of the book.

Continuity and evolution in public Sydney 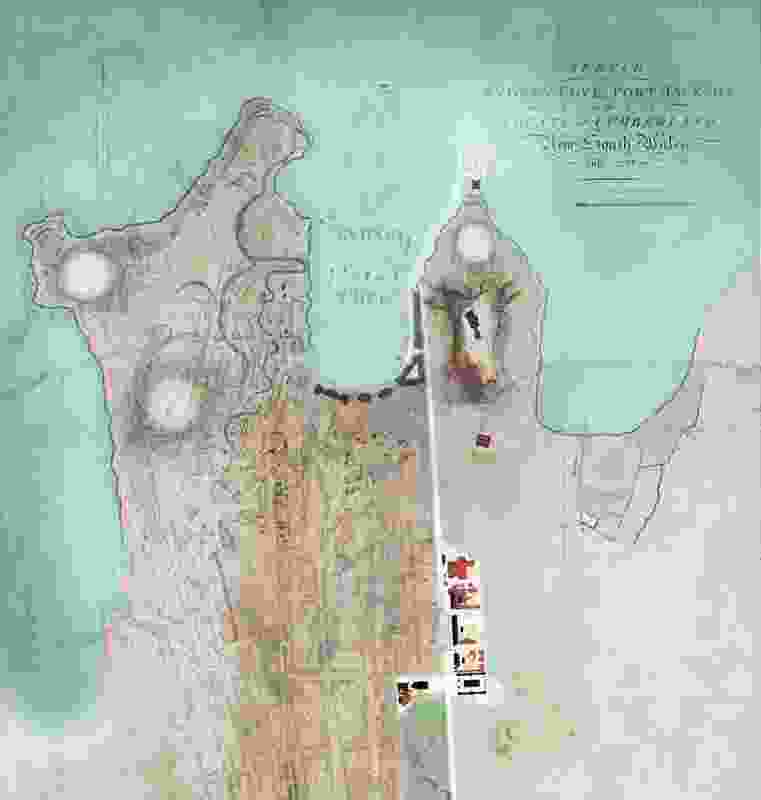