Located in an area where underground coal mining is planned, this house has been cleverly designed by Fergus Scott Architects so that limited floor area touches the ground.

The house consists of a central communal space touching the ground, with a cantilevered sleeping wing floating on either side.

Building a house on a country property comes with a range of logistical issues, including those relating to requirements such as the supply of infrastructure (power, water and access), transporting building materials and equipment to the site, dealing with bushfire regulations and finding a reliable local builder. In parts of the Hunter Valley in New South Wales, there is now an additional consideration that affects design and construction: underground mining. Crown rights to minerals and petroleum means that land ownership is not even skin deep.

When the owners of Quorrobolong House bought this Hunter Valley property, they knew that longwall underground coal mining was planned for the area. While they suspected the start date might be delayed due to a falling coal price, they decided to plan for the “inevitable” by incorporating measures that would allow their new house to accommodate minor subsidence.

Fergus Scott Architects came up with an ingenious solution: limiting the part of the house that touches the ground to a central communal area (kitchen and dining) and cantilevering a sleeping wing – which can be cranked up or down if necessary – on either side. To the east of the living area is the main suite (walk-in robe, ensuite and bedroom), while to the west is the guest wing, with three bedrooms, two bathrooms and a larger room at the western end that can serve as a secondary living space or additional sleeping accommodation. These two wings consist in part of huge precast concrete beams that sit on piers.

“We wanted the house to have a masonry content, but obviously not a small unit like bricks or blocks,” says Fergus. “Instead we needed the masonry to be monolithic so the house could have a degree of adjustability. The precast beams are simply supported and can be adjusted at each end. They form the cradle for a lighter structure – a series of steel portal frames.”

Wedged between each pier and the underside of the beams are small stacks of galvanized steel shims, each ten millimetres thick, hidden inside a dark steel cover. Inside the house, halfway along the longer, western wing, a narrow cork seam slices across the recycled karri floor to line up with a fine rib of polycarbonate wedged between two steel fins in the external walls. A hidden expansion joint is scribed across the ceiling and the roof sheets above it are lapped. The same elements can be found on either side of the central core of the building. In the event of any movement, or the wings needing to be jacked up or down, these slip joints will allow the building to flex and can be easily repaired.

“We’ve taken a shadow line through all the claddings at those points of the building,” explains Fergus. “If a crack is going to occur, the idea is that it will occur along those lines. It’s not foolproof, but there is a level of in-built adjustability.”

Viewed front-on, the house is streamlined and elegant, its roof line angling down from a near-central apex to either end. Its two wings hover above the ground plane, allowing water to flow unimpeded down the gentle slope of the land. The external walls are divided into three horizontal elements: the concrete beams, which form the lower part of the walls up to sill height; a band of jarrah cladding incorporating shuttered operable windows; and fixed panels of glazing above. This clerestory glazing captures northern light, provides views out into the trees and allows the visual continuation of the ceiling plane so that the roof appears to float.

The tapering lines of the building are further accentuated by angled front corners, which project out towards valley views ringed by a distant mountain range. The colours of the materials – soft, grey concrete and warm, reddish brown timber – pick up the tones found in the trunks of the surrounding spotted gum and ironbark trees. From some viewpoints the house melds into the bush.

While the building’s structural elements are, in Fergus’s words, “rigorous and hardworking,” his favourite aspect of the house is the sequence of spaces viewed from the entry, which form a strong transverse section across the main, linear body of the building. Here, sheltered by a portico, a pair of jarrah-clad doors swings open to reveal a view across a paved courtyard, through the dining area and out to a lawn terrace and the view. “We wanted to engage the building with the landform so it wasn’t just hovering above it,” Fergus explains. The northern courtyard provides a sheltered outdoor space for use in winter, while the summer lawn terrace, partly shaded by the building behind it, draws lines out from the building, connecting it and its inhabitants to the landscape. 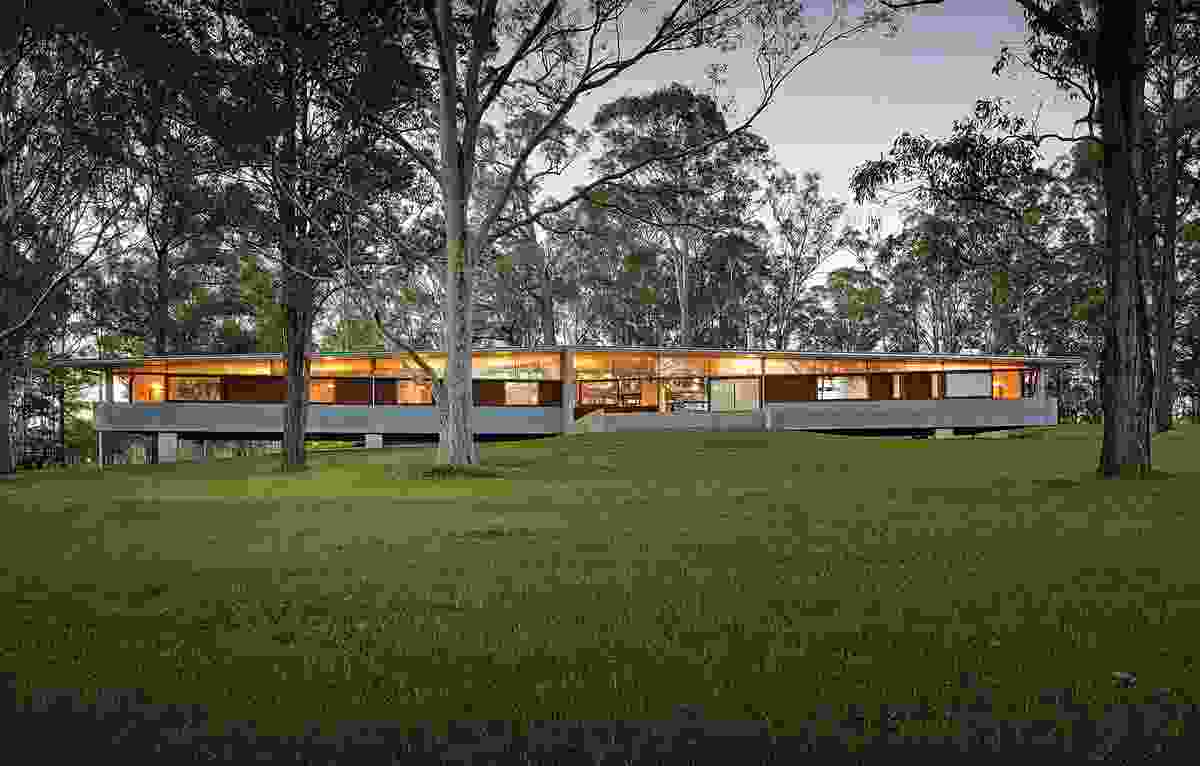 The house consists of a central communal space touching the ground, with a cantilevered sleeping wing floating on either side. 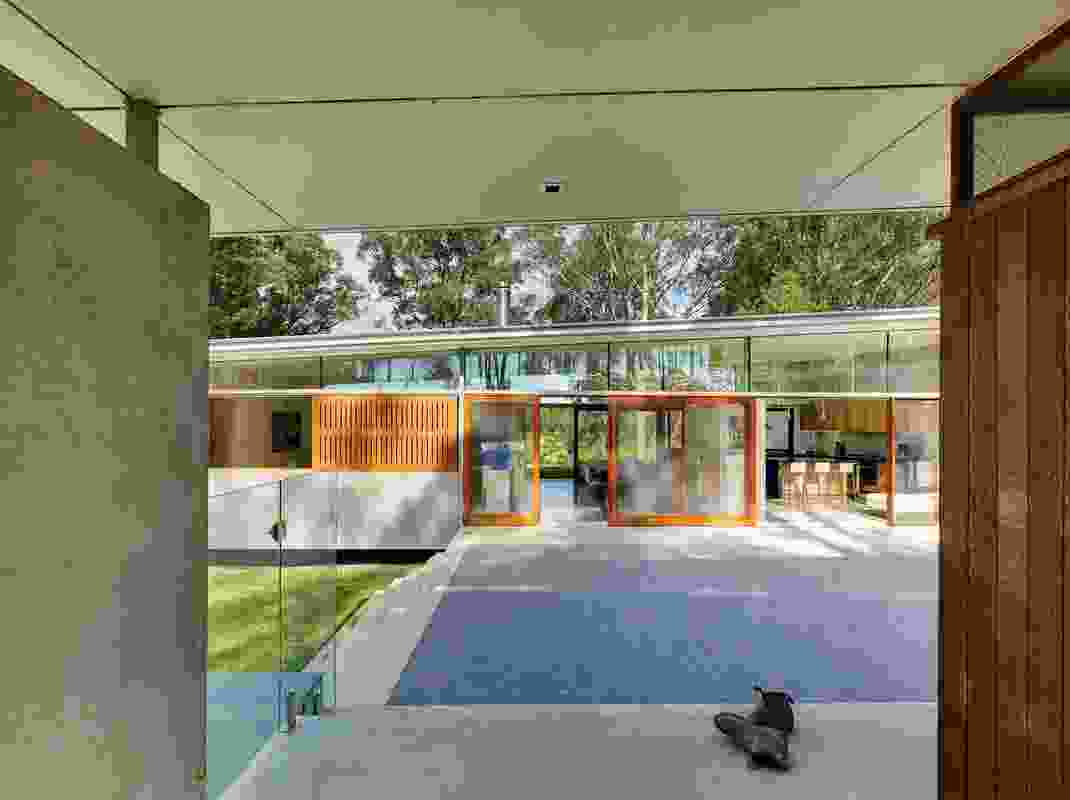 The dining and kitchen areas connect the northern courtyard and the grassed terrace. 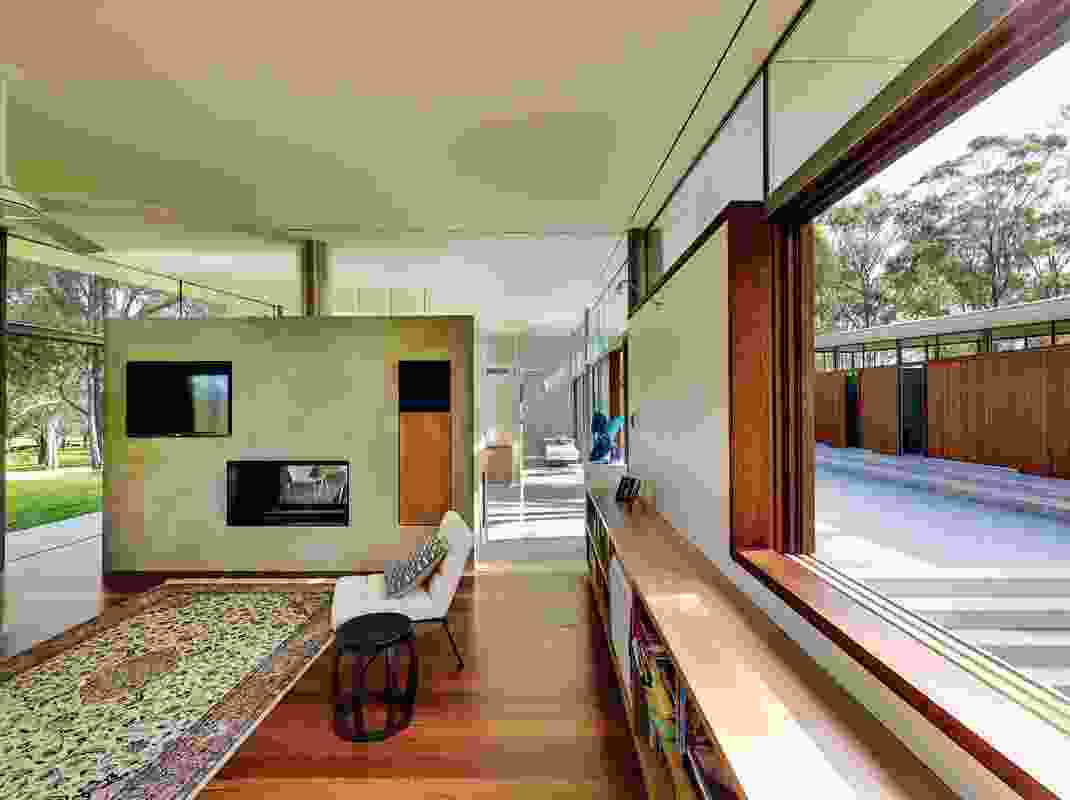 The interior’s grey concrete and reddish brown timber pick up the tones found in the trunks of surrounding trees. 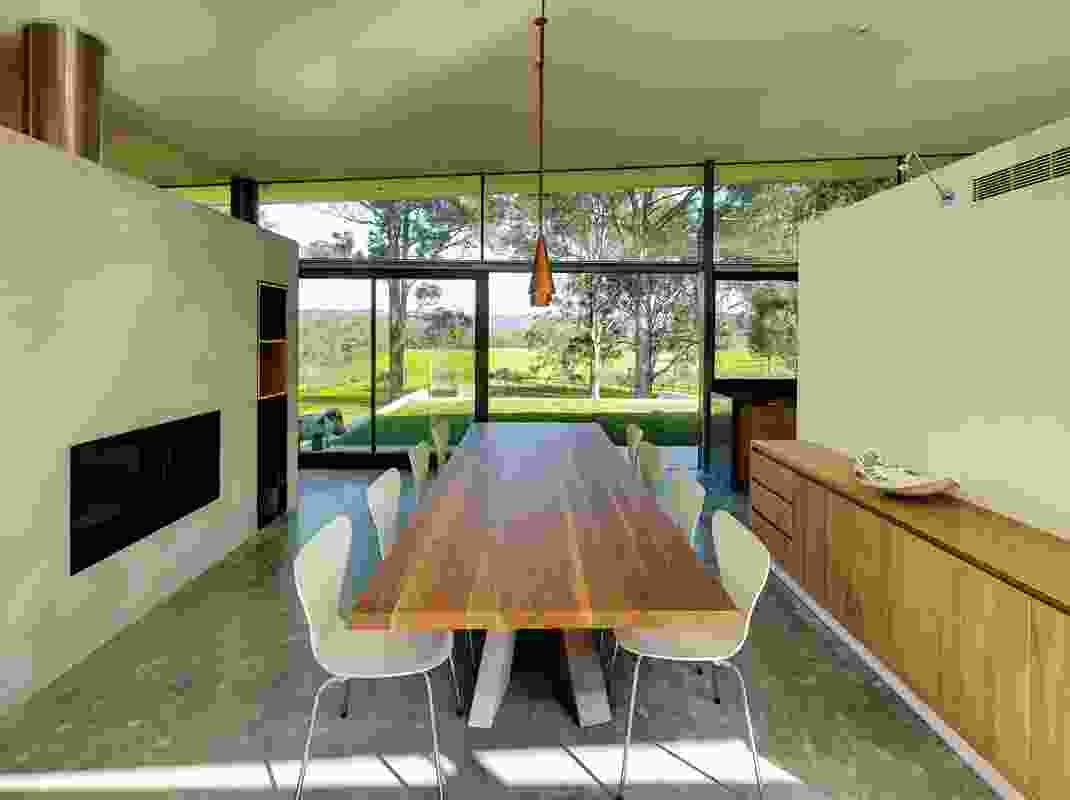 Clerestory glazing captures northern light and allows the visual continuation of the ceiling plane so that the roof appears to float. 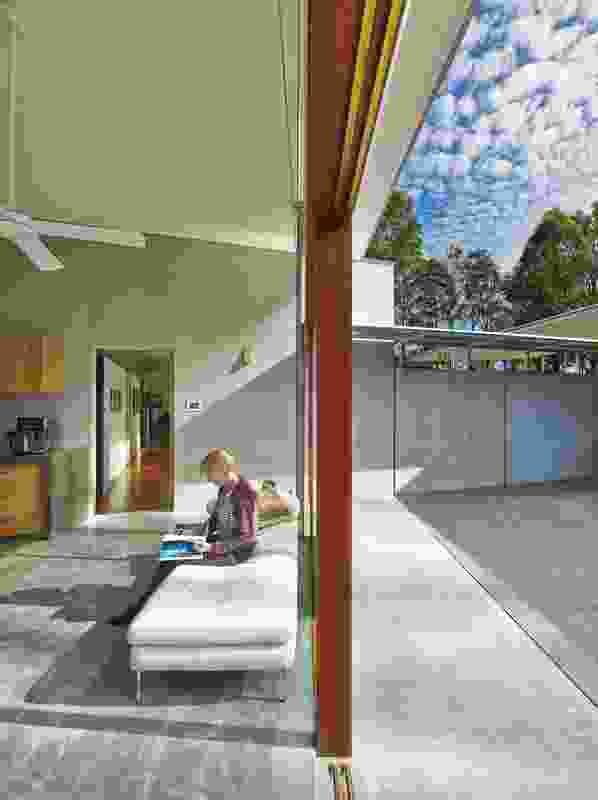 The communal area at the centre of the house is the only part of the building that touches the ground. 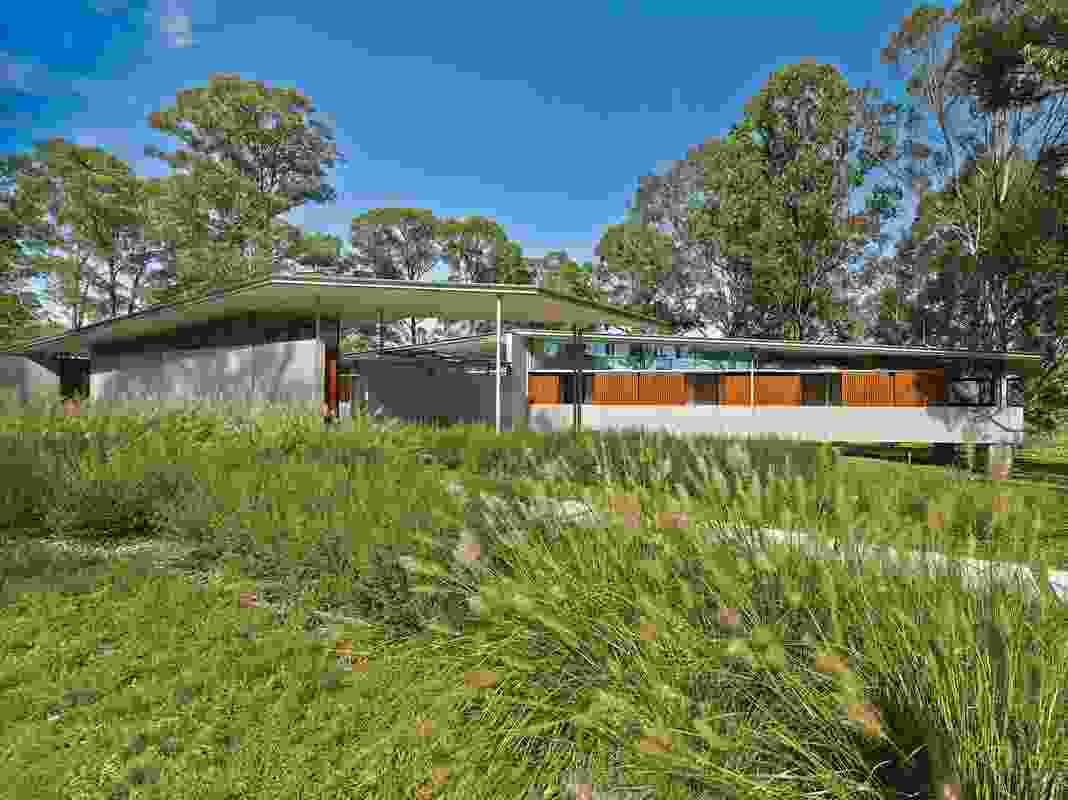 The roof line angles away from a near-central apex, allowing rainwater to flow unimpeded down the gentle slope of the land. 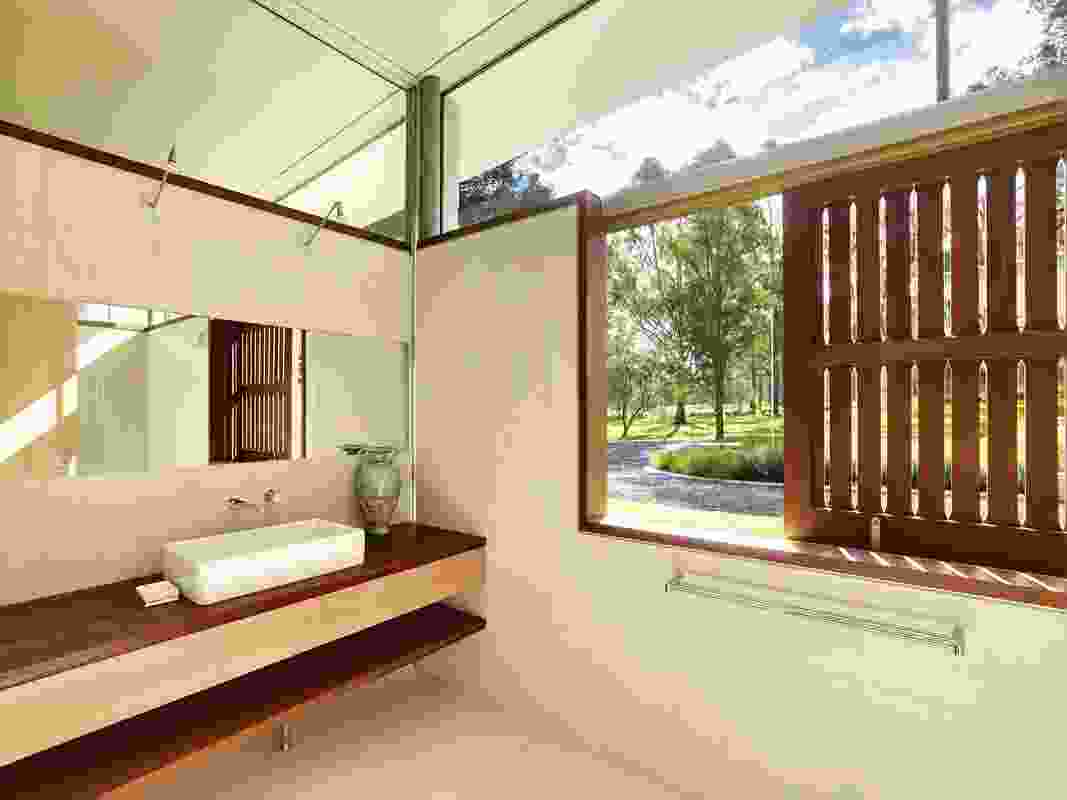 The bathrooms are open to fresh air and views, encouraging a connection with the elements. 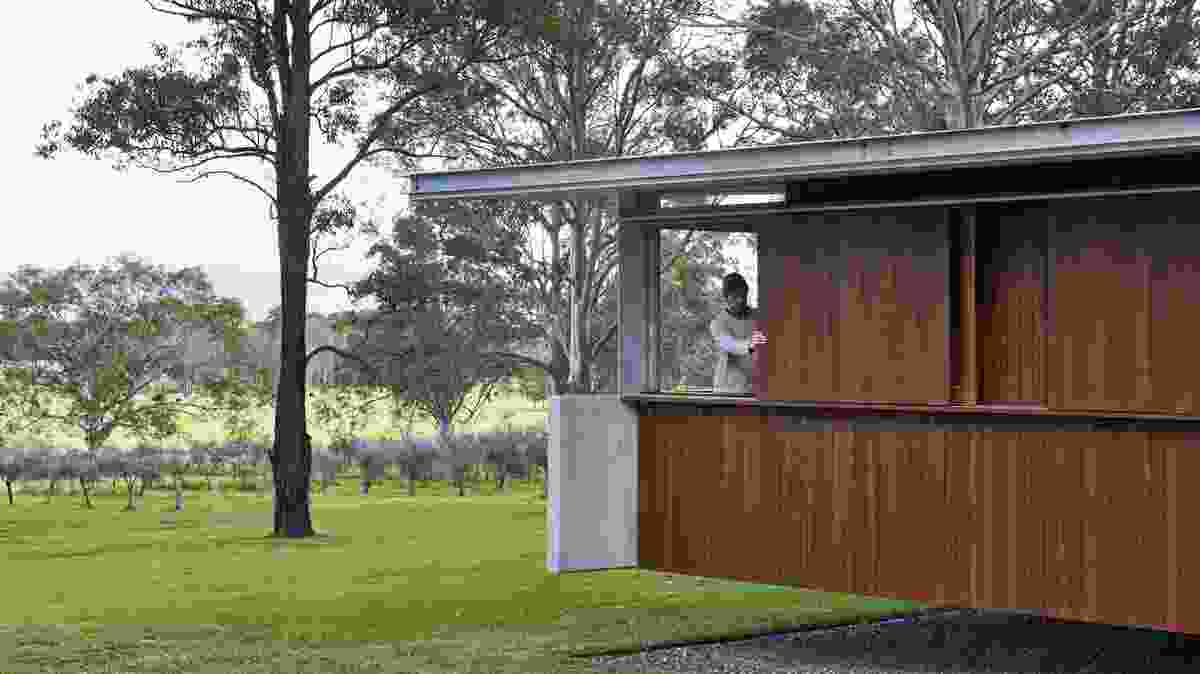