The first instalment of the RAIA state awards, leading to the nationals in Canberra on 17th November.

The RAIA Awards program has again thrust architecture into the limelight. In this issue we list award winners from New South Wales, Victoria, Western Australia and Tasmania. The next issue will feature South Australia, ACT, Queensland, and Northern Territory winners.

In this Olympic year, the  New South Wales  Awards attracted a record 143 entries. “There was a lot of work because of the Olympics, and the general building boom here, but the good news is that it has translated into a very good standard rather than the opposite, which is sometimes the case,” said jury chair Kerry Clare. “We discerned a sensitivity that has been respectful as far as the public realm and the environment goes, which were two issues of importance to the jury.”

In the absence of “in your face” heroic buildings, Kerry says the jury concentrated on discerning the subtle strengths of the key projects. “There are some very intelligent buildings being produced,” she said. “For example, the Tennis Centre (Bligh Voller Nield) is quite a robust building, not finessed in the way you might expect of a Sulman Prize winner but the work, environmentally, was so well done. On the other hand, the Scientia (MGT Architects) was a highly polished building, but we weren’t overawed by that. It was the broad picture of the public realm that the building responded to so well that impressed us.”

In commercial and public projects, Kerry has observed a move towards solutions that respond sensitively to public needs. “The shift has come from a lot of the commercial clients. They have gone past total rationalisation, concentrating on ‘core business’, and so on. As architects we are able to talk more holistically with them.”

In  Western Australia , Exmouth’s new international aiport at Learmonth RAAF Base by Jones Coulter Young took out the prestigious George Temple Poole Award, as well as the BHP Steel Award, and was applauded by the jury as a “jewel gleaming in the bush landscape of Exmouth”. Another noteworthy commendation was Central Perth’s 40-year-old Council House refurbishment by Peter Hunt and Daryl Jackson Architects. Not so long ago the building was scheduled for demolition – now it has been updated in terms of disability access, airconditioning and security while remaining consistent with the original Howlett and Bailey design.

In  Tasmania , innovative residential and conservation projects dominated the field, reflecting the burgeoning creative spirit in the Apple Isle. “We had 18 months of recession in the building industry, but the last six to nine months have been very bouyant,” said Tasmanian Chapter President Damian Rogers. “But people have been doing things on very tight budgets, so architects have been forced to be clever – to do a lot with very little. The future of architecture in Tasmania is looking at how we can find new uses for old buildings. With a stagnant population growth, we don’t need so many new buildings, but we do need to keep our heritage alive,” he said.

One major award, the Triennial James Blackburn Award for Residential Buildings, went to Leigh Wooley for a residential extension. “It’s very unusual to give a major award to something that’s essentially just a one-room extension, but the meticulous care and effort he put in to it, and the fact that he changed the whole function of the house, impressed the jury. It was more like a piece of joinery,” said Damian. “As there isn’t much money around, people are putting their design energies into smaller projects.”

Peter Crone, chair of  Victoria ’s Awards Committee, made a similar observation about the residential projects which impressed his fellow jury members. He believes the jury took a very fair-minded approach to assessing projects, taking low budget houses as seriously as the more salubrious dwellings. “The project I’m really enthusiastic about is the small house by Field Consultants, the winner of the Victorian Architecture Medal,” said Peter. “It is such an innovative project, on a tight budget, a tight site, and it posed a lot of problems to get it through planning. As an award winner, it conveys a positive message to the public – a lot of people are turned off architecture if they are constantly looking at million dollar houses.”

In Victoria, the large number of educational projects reflects a healthy growth in the sector. Overall, said Peter, the picture is a healthy one for practitioners – especially for young firms on their way up. “It’s maintaining a momentum that was building up through the nineties. It’s going to get better, and young firms are going to be able to make their presence felt.”
Julie Oliver 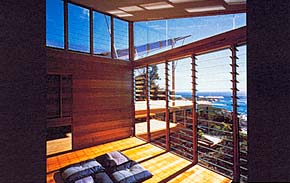 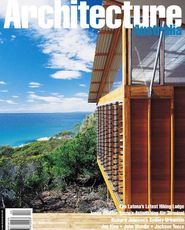