The architecture of the Illinois Insitute of Technlogy campus by Mies van der Rohe: the emphatic structural steel framework with brick and glass infill is an architectural statement of modern technology caressed by an abstract artistic vision.

In Houston, Texas, the University of St Thomas buildings by Philip Johnson follow the Miesian imagery, but in a suburban setting, at a gentler scale. 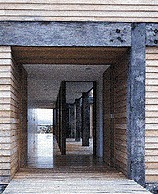 View through the house from the front entrance, with the colonnade of the pool court at right.

I have great admiration for each of those three examples of archetypal buildings. I had not anticipated encountering a building in Australia that would somehow fuse the predispositions of that trio into another context and interpretation. Least of all did I expect to find such a fusion at Merimbula, on the south coast of New South Wales. Merimbula has been long regarded as a sleepy oyster-growing, fishing and farm supply town with some wonderful beaches that holiday makers converge upon during the Christmas and Easter tourist influx. Over the last decade a surge of retirement villages and neo-yuppie apartments have added geriatric and gentrified elements to the Merimbula demography, so that incursions of a more cosmopolitan culture have given a cappuccino tinge to the previously relentless fish and chips demagoguery. This trend has brought some fresh insights and even a few instances of architectural creativity.

The most highly pitched of these poignant rural/suburban seaside architectural moments is this Merimbula beach house, a holiday retreat for a Melbourne-bred, internationally-based expatriate family. The design and construction of the house involves the diverse talents of a local dynasty, the Murray family, the youngest of which is the architect Clinton Murray, and brother Andrew the builder and craftsman. 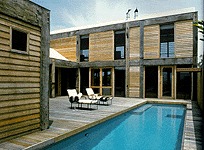 The structure and infill genre is directly announced by the street facade: perimeter posts and horizontal beam, with infill of yellow stringybark boards. Above, the horizontal top edge of the boarded panel takes a downward slice in the left hand corner, in line with the roof behind. Slightly off-centre, the entrance is deeply recessed. Immediately beyond the entrance, which is flanked by doors leading to bedrooms, clear floor-to-ceiling glazing leads the view down a corridor and, to the right, into a spacious courtyard-a considerable plateau of hardwood decking, and on its perimeter, a most astringent lap pool. Above the pool, a copper conduit delivers a stream of water, in the Luis Barragan manner, adding a touch of sparkle to the seriously fastidious composition. Moving through the flanking passage, beyond the glass line and within the courtyard, massive timber columns form a grand colonnade and link with the two storey volume on the north side of the courtyard. The size and spacing of these great timber columns and beams are the prime generators of the tectonics of the dwelling. According to Clinton Murray, this architectural choice was dominated by a wish to have a building which is not only actually but also symbolically resistant to natural forces: rooted firmly in the earth, like wharves and bridges. The great ironbark and tallowwood flitches, used in full 500 x 500 mm section for free-standing columns, and longitudinally sawn grey box beams, were brought from a Echuca storeyard whose owner specialises in stocking recyclable timbers from large structures.

The columnar structural beat continues within the dwelling, but the high ceilings are flush white plasterboard. The internal hardwood timber flooring and external decking are in the same plane, with no sills at thresholds-rather a canny row of holes through which water drains. 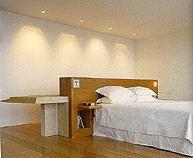 Upstairs main bedroom with desk behind.

The plan form is essentially three rectangles around the courtyard. On the ground floor of the two-storey block are the kitchen, dining and living areas, bounded on both long walls by frameless, double-hung windows and pairs of large doors. The eastern end is taken by the kitchen (with a storage wall masking the narrow stair to the first floor). The finishes of the kitchen components are sumptuously simple: marble, stainless steel and fine-grained timbers. At the western end of the living area, a sandstone fireplace, mantel and set of bookshelves is a slightly eclectic contrivance; its companion piece in the bedroom directly above being more effective in its restraint. The upstairs bedroom is of noble proportions, the view is panoramic. The combination of spare minimalist detail and luxurious unembellished surfaces induces a state of blissful tranquility. Discreetly tucked away behind the bedhead, a low sandstone wall, is a desk for the usual electronic gadgetry that is prone to shatter the leisurely life, or perhaps just for contemplative study.

The beach house is beautifully-crafted, exhilarating architecture. The instantaneous experience of it is thoroughly satisfying. 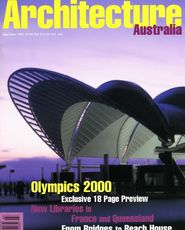