A glowing pavilion in Sydney’s Chinatown by Lacoste + Stevenson and Frost Design demonstrates the strengthening role of small-scale interventions.

The facade of semicircular light boxes with the artwork on the exterior.

An addition to Sydney’s Chinatown by Lacoste and Stevenson and Frost Design demonstrates the strengthening role of small-scale interventions.

Sydney’s first Chinatown emerged in The Rocks during the gold rush era of the 1870s. Beginning as an unofficial gateway for Chinese prospectors travelling to the goldfields, the district slowly crept south, and today’s Chinatown was officially established in Haymarket with the opening of Dixon Street Mall in 1980. Sydney’s Chinatown has undergone a series of facelifts since its original construction, and Lacoste and Stevenson’s Red Lantern kiosk, completed in January 2012, is one of the newest additions to the city’s version of the contentious urban archetype. Described by the architects as a “red emblem,” the kiosk is a small but high-quality addition that reinforces Chinatown’s significant role as a major tourist attraction, fuelled by a legacy of investment by City of Sydney Council and its own diverse community.

Red Lantern is typical of Lacoste and Stevenson’s portfolio of sleek projects that boast a bold use of materials and sensitive attention to detail. With the assistance of Frost Design, a new tourist information kiosk was inserted inside an existing pagoda structure to create a “highly sophisticated enclosure” with its compact, joinery-filled interior wrapped in a decorative glass skin. Perched on the edge of Goulburn Street, the lantern is a pop-art-like addition that lifts the atmosphere of the pedestrian mall with its surreal glow. A crisp materiality reinforces its iconographic and symbolic role, literally marking the edge of the Chinatown precinct and flaunting itself to the city beyond.

Despite its delicate appearance, the kiosk, now one year old, was built as a highly robust structure. The facade is created by a series of semicircular light boxes clad in curved glass with a patterned artwork carefully applied to the exterior, balancing the facade’s reflectivity with the textured warm grey of the graphite-infused surface. By day the lantern glows a soft red, contrasting with the pattern’s silhouette. At night this intensifies, and blazing red light articulates the paper-cut design, with the curved front facade closing to create a 360-degree artwork.

The lantern is a powerful symbol, echoed by the traditional crimson of hanging lanterns dotted around nearby shops and arcades. The original pagoda structure is prominently positioned on a plinth along the steep slope of Goulburn Street, providing useful conditions to enable its reuse as a tourist information point. The kiosk’s operable pamphlet-filled facade entices approaching tourists in the pedestrian mall, while the rear naturally blocks prevailing sun and rain, maximizing user comfort while projecting its decorative face to the city and passing traffic. The compact design has seamlessly integrated multiple requirements, maximizing joinery space, incorporating amenities and even enabling wheelchair access.

The facade artwork was created by Australian artist Pamela Mei-Leng See, who is of Chinese descent and practises a contemporary form of paper cutting. Stevenson describes her involvement as “lifting the bar” in the project, allowing the design team to move beyond mere shape-making in the creation of a unique artwork that incorporates important cultural motifs and a handmade quality. The artwork is characteristic of the artist’s style, which is delicate but has striking graphic qualities, incorporates a bold use of colour and depicts natural motifs including a crane, flowers and fish.

By incorporating these significant cultural references the artist adds depth and authenticity to the design, where the hand-cut artwork was digitized and translated into a printed graphic to wrap the facade. Carefully positioned LED lighting gives a highly consistent surface illumination, enabling the kiosk to mimic the form of traditional Chinese lanterns, whose glowing red surfaces were typically decorated with elaborate custom designs.

In order to achieve its material richness and formal precision, the project was tested with 1:1 prototyping and a high level of investment by its team of consultants. By achieving such a high quality of finishes the project exemplifies the potential impact of urban interventions at a human scale, here closely linked to the scale of Dixon Street with its narrow branching laneways and the dark intimacy of its enclosed pedestrian street.

The pagoda is transformed from a sterile cultural cliché to a modern expression of Chinese heritage. In this way, the skilful adaptation of an outdated pagoda demonstrates the potential for small-scale interventions to strengthen and even redefine the role of Chinatown in the city.

Building in Chinatown, however, raises issues around the area’s complex history and cultural role. The invention of the twentieth-century Chinatown was a phenomenon in which “antiquated” Chinese symbols were translated into new built environments, heralding changing attitudes to multiculturalism and ethnicity in the city. The Chinatown concept is often accused of lacking authenticity, being nothing but a simulacrum and a commodification of culture used to foster tourism.1

As the third most visited tourist attraction in Sydney,2 Chinatown has long played an important economic role, which is evident in the legacy of upgrades to the area carried out by the city’s council. The “red emblem” of this new lantern kiosk reinforces this investment into Sydney’s multicultural image and Chinatown as a profitable tourist icon. The ongoing repackaging of Chinatown reveals the important role of tourism as a driving force in placemaking in the city, where Chinatown could be considered a cliched cultural stereotype, or a profitable and symbolic centre for the Chinese community.3

Red Lantern has significant implications as an addition to this complex urban space laced with diverse cultural connotations. It reinforces Chinatown’s tourist-oriented role, while being an artwork in its own right that embodies Chinese artistic traditions, presented in a contemporary aesthetic and realized through modern building technologies. The pagoda is transformed from a sterile cultural cliché to a modern expression of Chinese heritage. In this way, the skilful adaptation of an outdated pagoda demonstrates the potential for small-scale interventions to strengthen and even redefine the role of Chinatown in the city. 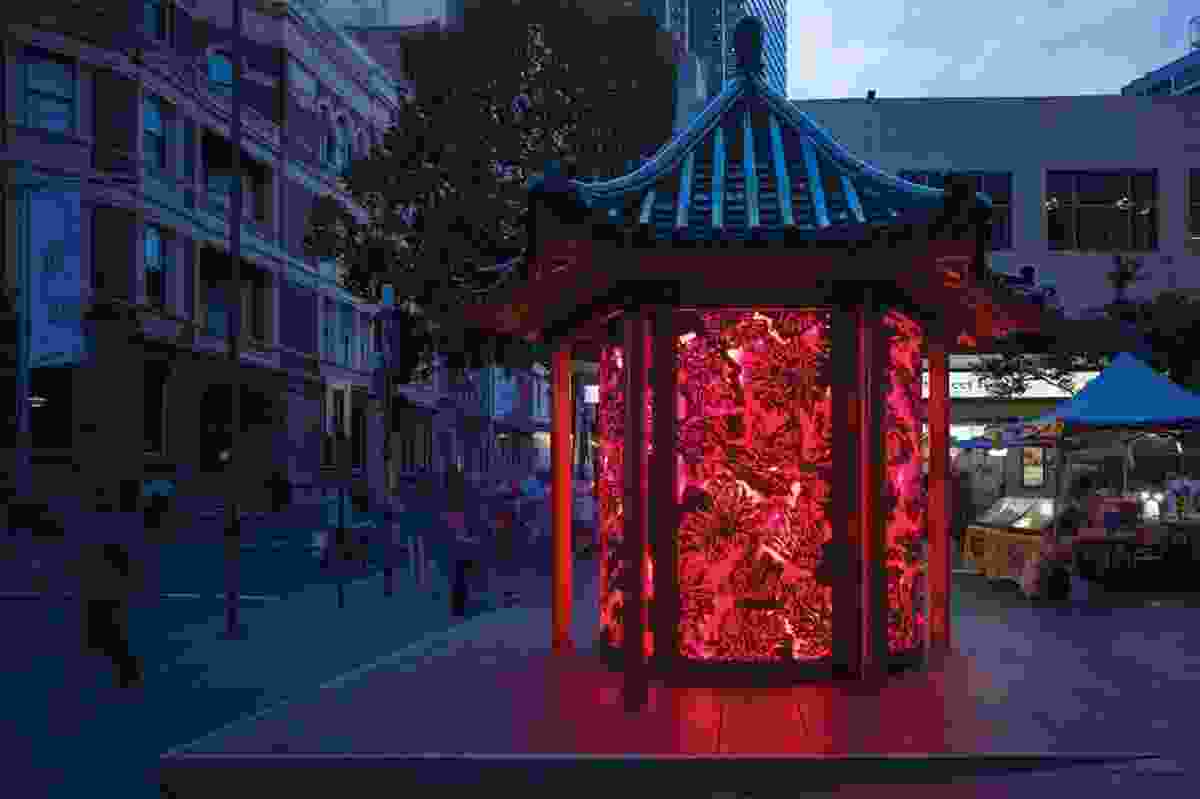 The facade of semicircular light boxes with the artwork on the exterior. 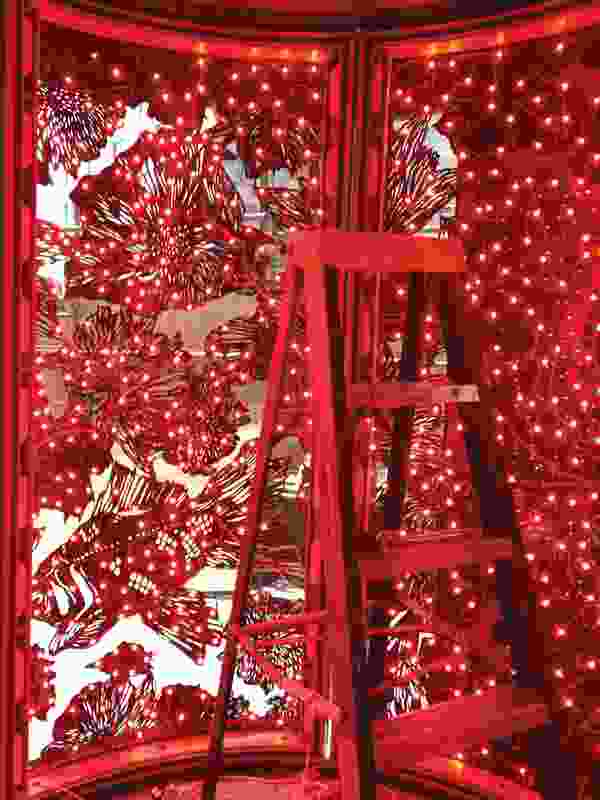 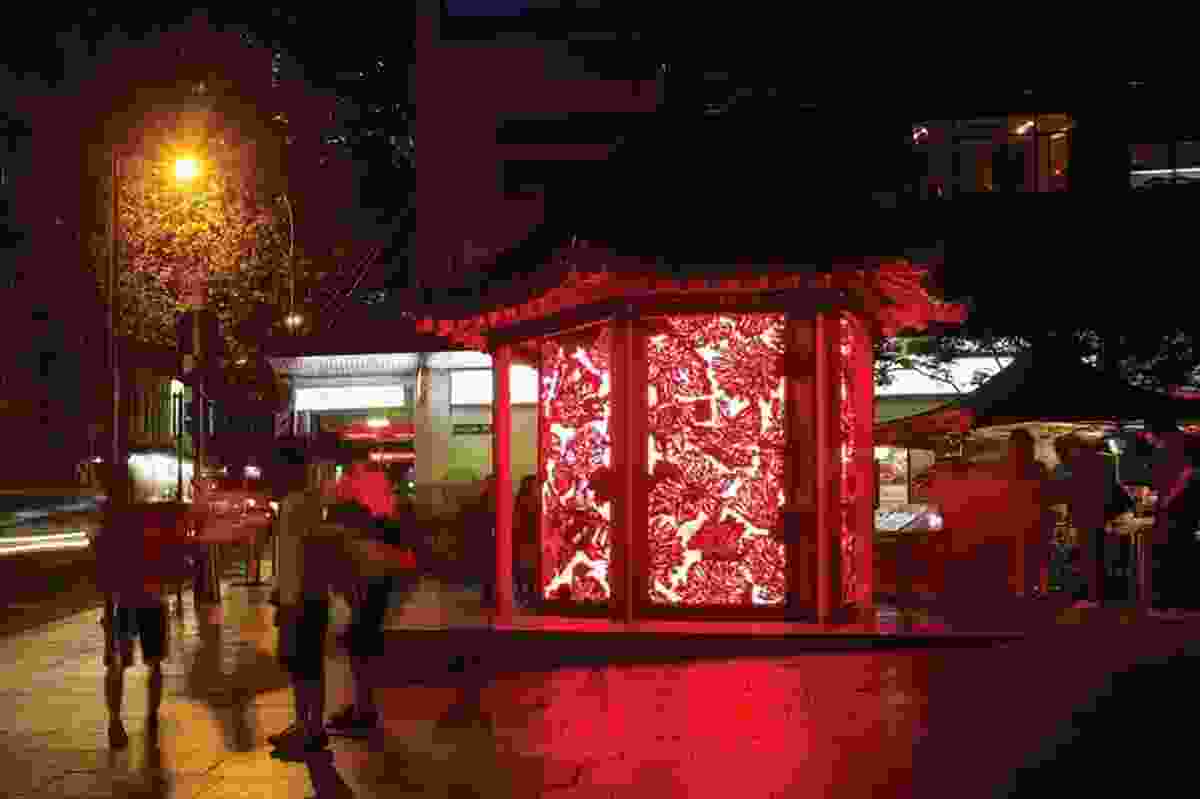 The lantern adds an atmospheric presence to the pedestrian mall. 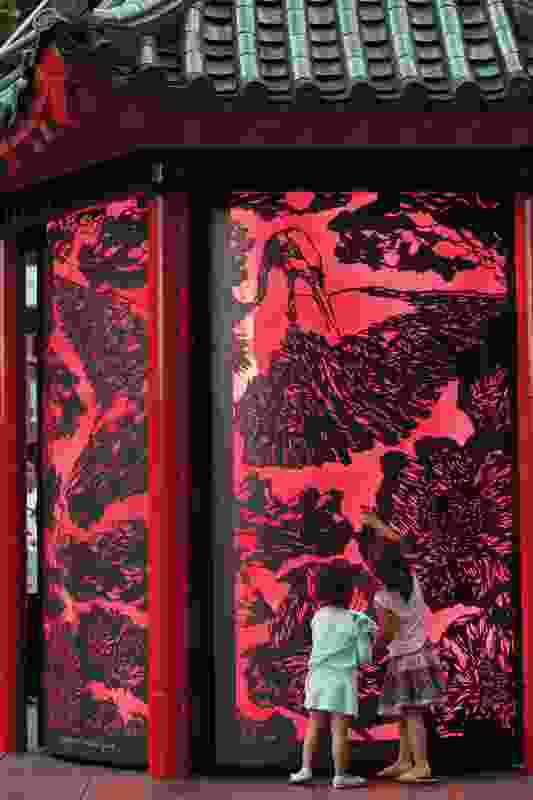 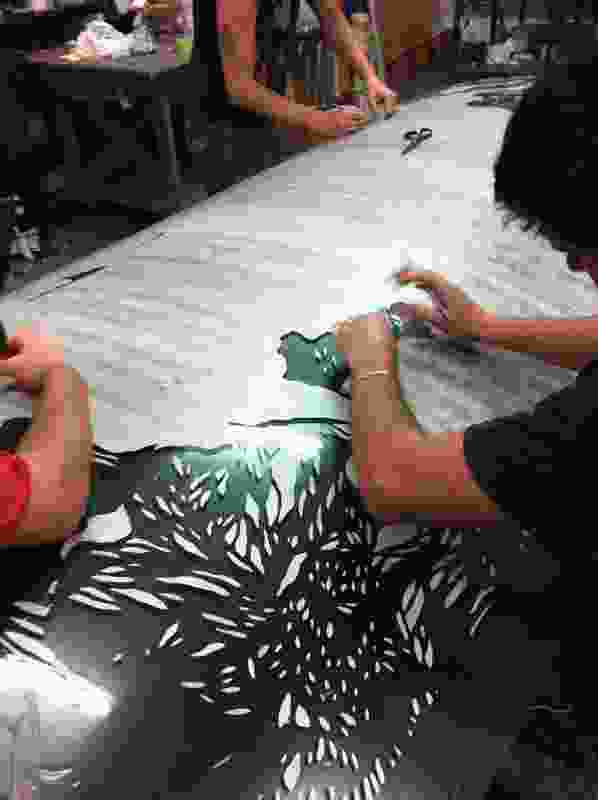 The art was hand-cut, digitized then translated into a printed graphic. 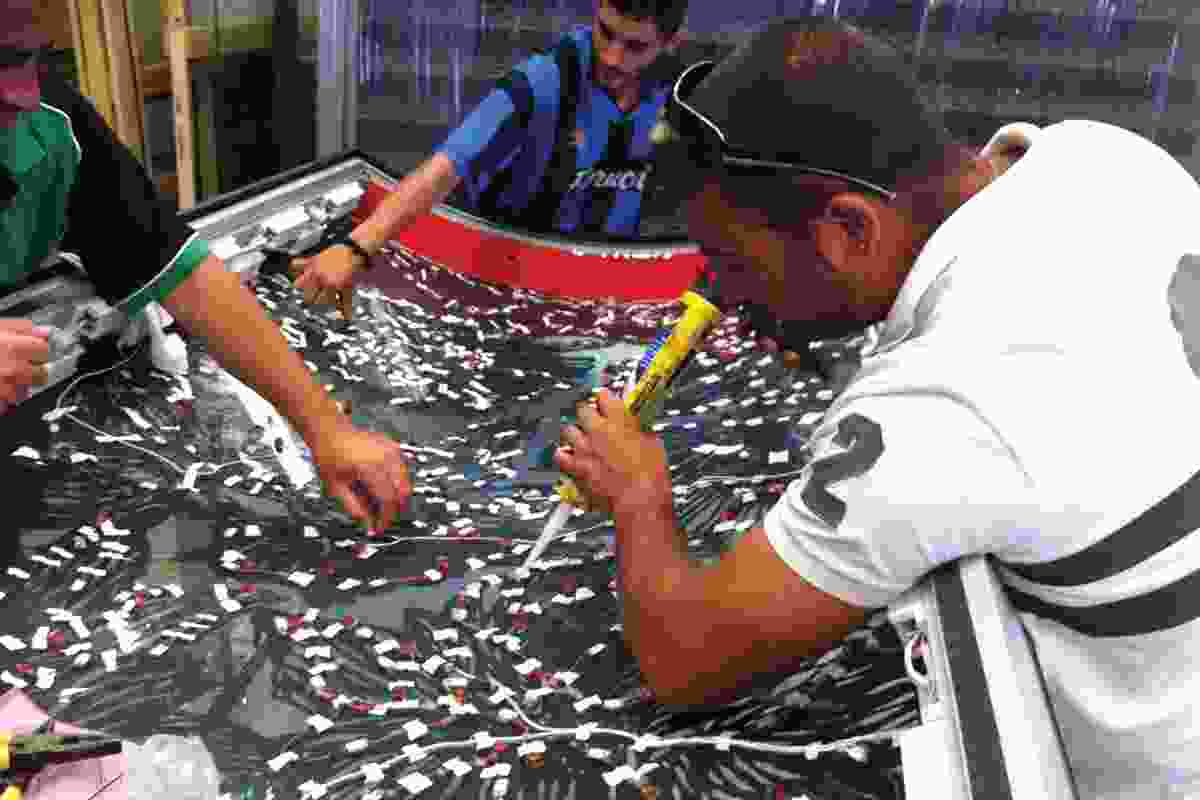 The team works on the facade. 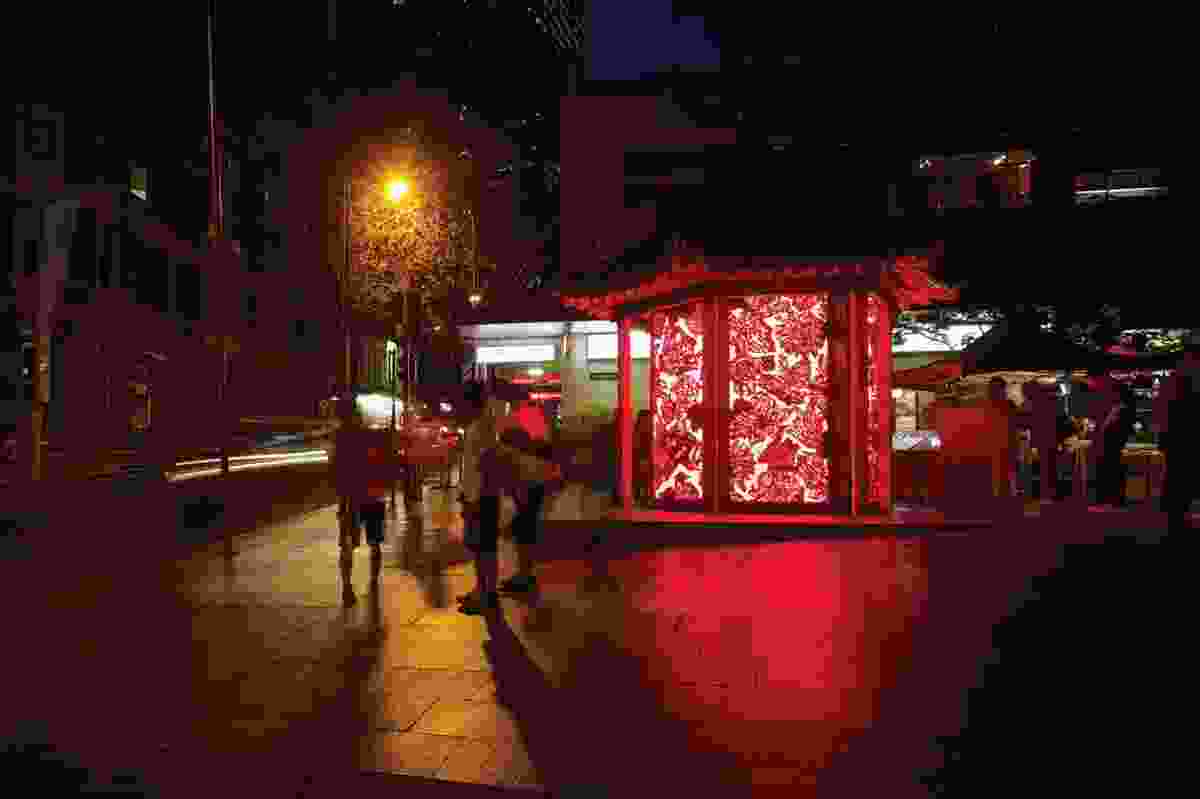 The lantern’s glow lifts the atmosphere of the pedestrian mall.