As architecture competitions almost seem to have become the default process for selecting architects and designs for every project, their proliferation risks devaluing the real merits of a fair and well-ordered competitions process. Michael Keniger surveys a suite of initiatives intended to protect design integrity, contain financial risk for entrants and promote innovation in local architectural culture.

The amphitheatre and plaza in Hassell and Herzog & de Meuron’s competition-winning scheme for Flinders Street Station, Melbourne (2013). No funding for the project had been secured by the Victorian government at the time of the competition.

Throughout my career I have advocated the use of architectural competitions to select designs or design teams for notable public buildings and spaces. Open competitions in particular can bring forward a breadth of new talent, new ideas and adventurous views of the future and serve to advance the architecture profession, especially when shaping the public realm. There is a sense of bravura and an excitement about the melting pot of ideas that results from the challenge of a competition, particularly when we recall the body of knowledge drawn from significant competitions of the past – most notably that for the selection of the design for the Sydney Opera House.

And yet today, our enthusiasm wanes. Competitions are no longer reserved for high-profile projects and have rather become the default process for selecting architects and designs for virtually any form and scale of project, public or private. Various competition formats are now almost-ubiquitous elements of common procurement processes, their value in driving forward new ideas diminished as clients and public bodies mix and match their preferred options across designs, design teams and contract types. The resulting loss of coherence dilutes the value of the competition process and diminishes the quality of the compelling architectural ambitions. As architectural services are divided and truncated by the increasing use of novation there is a risk that commitment to high-quality design outcomes will continue to be eroded, leading to even less time for design development or for the oversight of project delivery. Practical experience for many students and graduate architects is increasingly dominated by the preparation and rendering of documents for competition presentations. Broader involvement with projects is curtailed and site-based engagement during construction is often minimized, furthering a waning of skill within the profession. Focused research into the consequences of the broadened use of subsidiary design competition selection and appointment processes would seem to be timely.

The proliferation of competitions and a tendency toward a looseness in structure and conditions is buffered to a degree by the guidance provided by the Australian Institute of Architects’ comprehensive Architectural Competition Policy and the accompanying Guidelines for the Conduct of Architectural Competitions. The policy is about to be updated to address a number of issues, including concerns that client agencies are seeking international architects and thereby constraining the creative input of associated Australian architects. Other issues include the need to rebalance second-stage fees in two- stage competitions to ensure that they are commensurate with the extent of the work required, and a reconsideration of whether Institute endorsement should be granted only to a competition in its entirety (the policy currently permits partial endorsement of just the final stage). Clear, decisive responses to these questions will strengthen the general provisions of the policy, which aids in the establishment of a fair and well-ordered competition process and articulates why such competitions are of value.

Other useful guides include one prepared by the Office of the Victorian Government Architect to inform government organizations specifically on how to utilize architecture design competitions to achieve high-quality design. The guide is illuminated by concise case studies of competitions for Flinders Street Station, Frankston Station and the Shepparton Art Museum. These include their respective processes, outcomes, initiatives to protect design quality and a summary of lessons learned. In its case study of the Flinders Street Station competition, the guide states: “it is important to have clear messaging regarding the vision and purpose of the competition and how the project will proceed,” noting that, at the time of the Flinders Street Station competition, funding had not been secured.1 Such frankness reveals a difficulty too often encountered by competitors: that funding for a competition project has not been allocated.

Design quality has been championed in New South Wales through a variety of planning policies and design guides. Design excellence is one expectation of the state government’s Environmental Planning Instruments, which may be met through the employment of a design competition to select the design and the architectural team. In May 2018, the office of the Government Architect NSW released for public comment a draft of the revised and expanded Design Excellence Competition Guidelines, in which public authorities are urged to consider employing competitions to “encourage development that is healthy, responsible, integrated, equitable and resilient.”2 A particular feature is the advice given to adopt processes beyond the conclusion of a competition that serve to sustain the quality of the selected design, recommending independent oversight by a design integrity panel that includes between one and three members of the competition jury. The value of such scrutiny can help to ensure that the nature and quality of the selected design is sustained throughout the design development and construction stages of the project.

The City of Sydney has embraced design excellence by mandating the need for any public or commercial project in the CBD on a site area of more than 1,500 square-metres or of a height of 55 metres or over to conduct an architectural competition for the selection of the design and the architect. Compliance with the policy can result in extra height or up to 10 percent of additional floor area. This began in 2000 as an optional competitive design process and is now legislated through the Competitive Design Policy (2013). One consequence of the policy has been the greater adoption of well-prepared and well-structured competitions for the public spaces and facilities in developing areas such as Green Square. The recently opened library and plaza at Green Square by Stewart Hollenstein with Stewart Architecture has attracted international recognition, receiving the Architectural Review Library Award 2018. Critically, it won the praise of Elizabeth Farrelly who described its “gesture of genius: to create a public space by not occupying it … It’s subtle. It’s sophisticated. It’s the best possible argument for maintaining boundaries between government, as guardian of the public interest, and the private sector.”3 This relatively modest public project exemplifies the many positive outcomes that can result from a well-structured competition that is shaped by civic ambition and that benefits from the informed judgement of an experienced jury.

A recurring and consistent objection to the use of competitions is the perceived gross waste of effort of those who often submit schemes yet rarely win. In instances where construction of the selected design is thwarted, there is an even greater loss for the client body and for all those who gave their energy and their ideas to the common cause of achieving the best outcome. The 2014–15 international open competition for a Guggenheim art museum in Helsinki proved to be one such substantial loss. More than 1,700 architectural teams worldwide submitted schemes for the first stage of the competition. Six teams were shortlisted for stage two, with the winning submission ultimately determined to be that of Paris-based Moreau Kusunoki Architectes. The subsequent refusal of the City Council of Helsinki to contribute to funding caused the project to be abandoned – so undermining and devaluing the effort and purposeful goodwill of all those who had submitted.

Despite the pall cast by the ultimate failure of the competition, there could be lasting merit in having open access to the online archive of the submitted schemes provided by the Guggenheim Helsinki Design Competition website. The value of such a resource has been exemplified by Susan Holden in her appraisal of the competing and sometimes conflicting architectural ideas and motivations evidenced in the 681 schemes submitted to the 1971 Centre Beaubourg competition (the site of the Pompidou Centre), all of which have been retained in the competition archive accessible via the Centre Pompidou website. Her findings are illustrated by reference to a broad selection of the entries including those of Georges Candilis, Elia Zenghelis, Kisho Kurokawa, Arthur Erickson, Dennis Crompton, Sverre Fehn, Moshe Safdie and Ken Maher with Colin Stewart and Craig Burton, then recent graduates from the University of New South Wales. Holden suggests, “As won and then built by Piano and Rogers the Centre Pompidou is now celebrated for the way it materialised the challenge to the disciplinary limits that characterised architecture in the 1960s. But … the world of possible Pompidous opened up by the competition archive reminds us that such limits … may also be a function of an event like the competition itself, with its particular mix of entrants, jurors and bureaucratic idiosyncrasies. In this sense, perhaps more even than a celebrated arts building, [Georges] Pompidou’s real legacy was to let an open architectural competition unfold and a jury’s decision hold.”4

Sharpening the purpose and utility of competitions, ensuring that they are structured to suit the nature and scale of their respective projects, trusting the judgement of the appointed juries and enabling access to the full suite of submitted entries would, together, help to restore confidence in this facet of exploratory architectural endeavour. 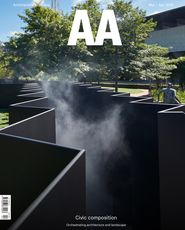 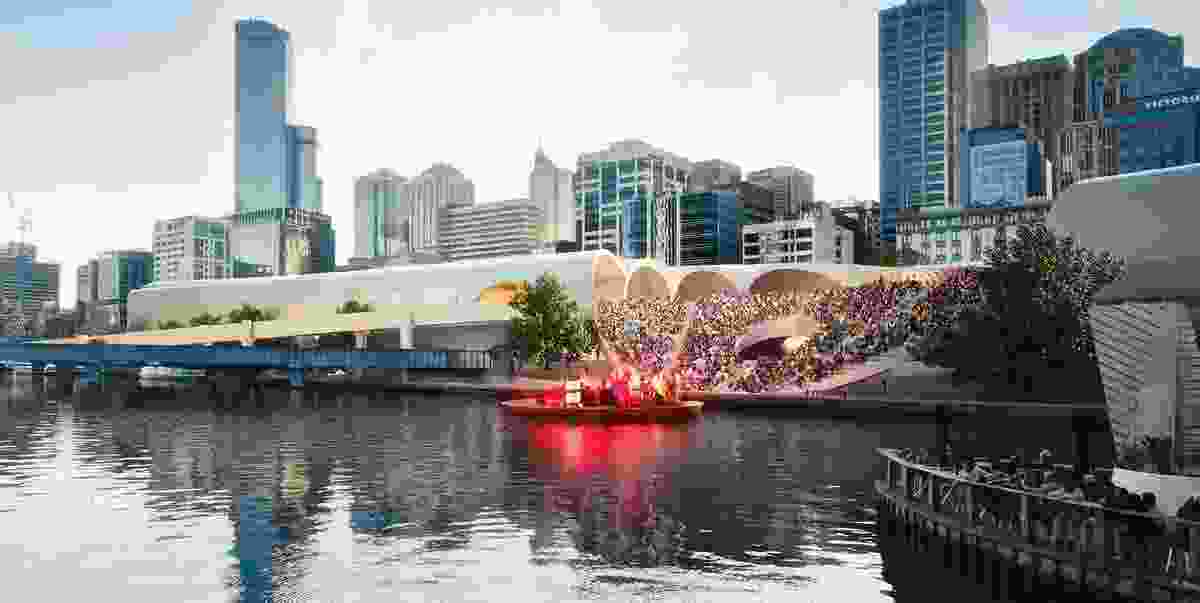 The amphitheatre and plaza in Hassell and Herzog & de Meuron’s competition-winning scheme for Flinders Street Station, Melbourne (2013). No funding for the project had been secured by the Victorian government at the time of the competition. 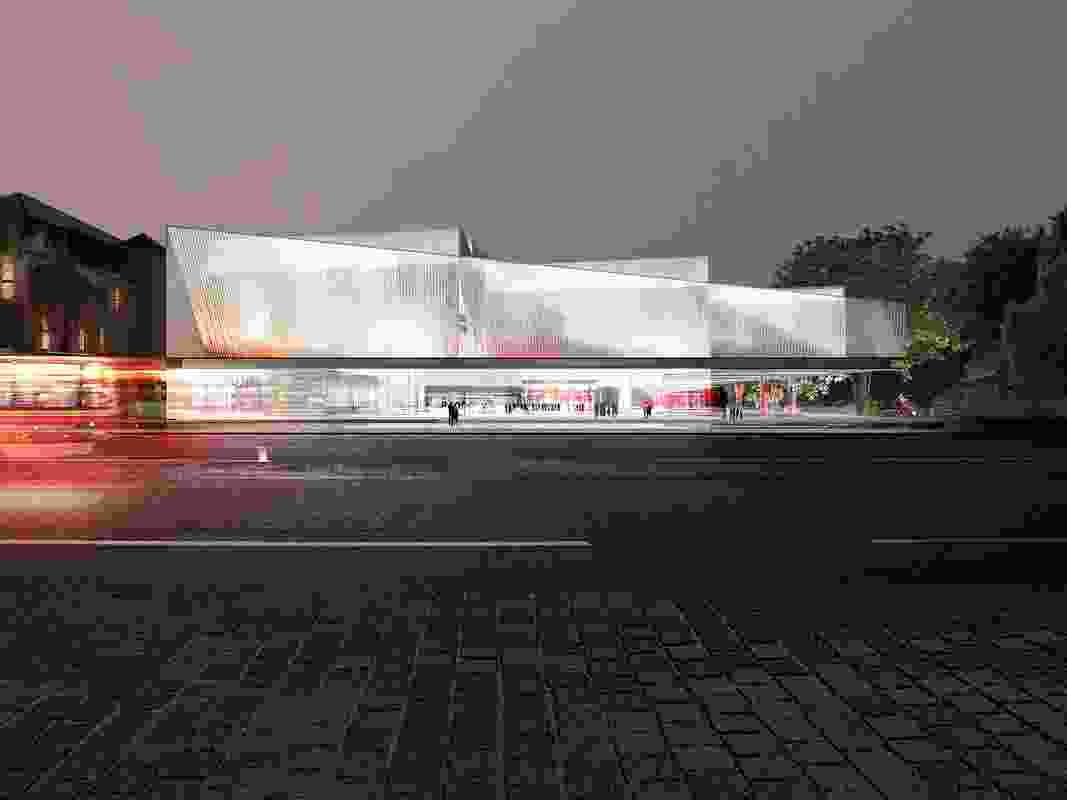 The winning scheme for the Adelaide Contemporary International Design Competition is a “porous, open and welcoming” design by Diller Scofidio and Renfro and Woods Bagot. Woods Bagot is now part of the design team masterplanning the broader site of the former Royal Adelaide Hospital. 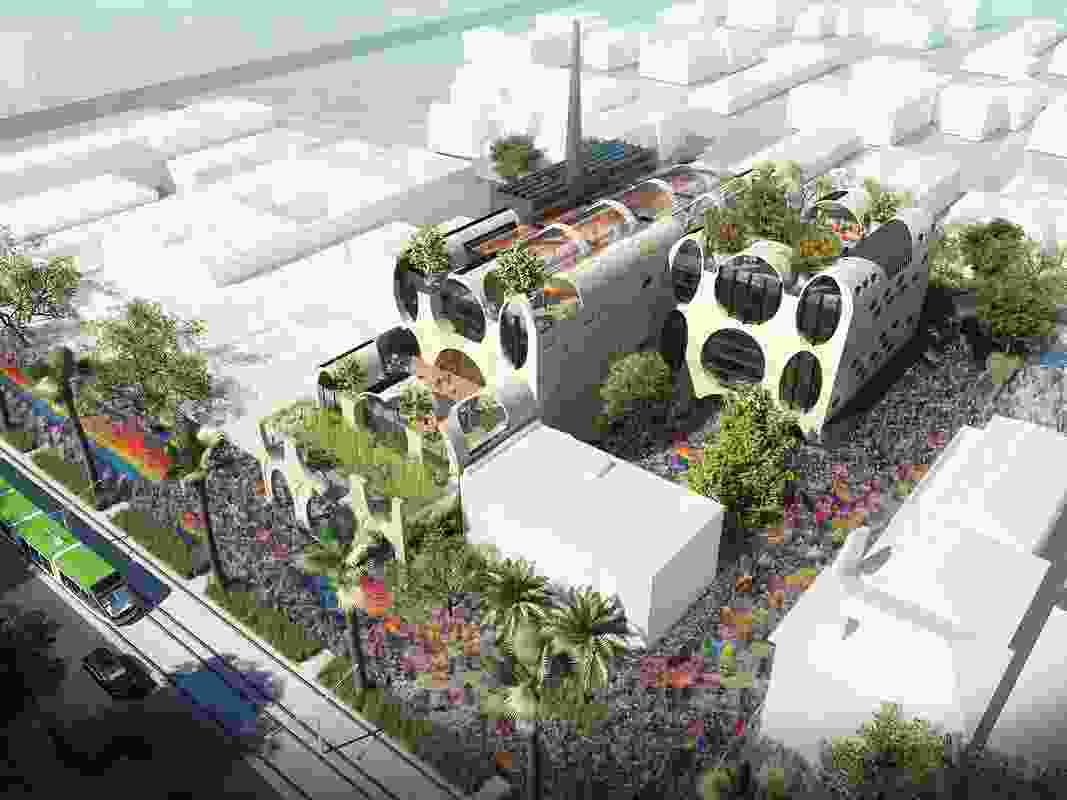 Australia’s first custom-built LGBTQI Pride Centre will be built in the Melbourne suburb of St Kilda to a design by Grant Amon Architects and Brearley Architects and Urbanists, following a 2017 design competition. 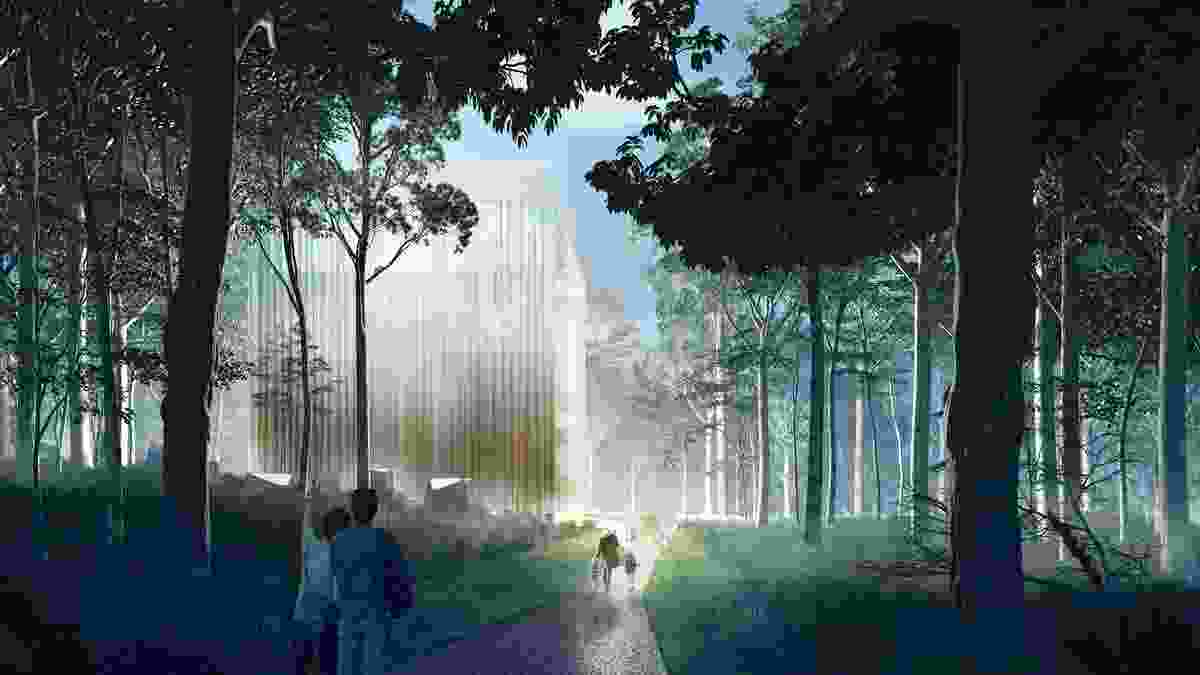 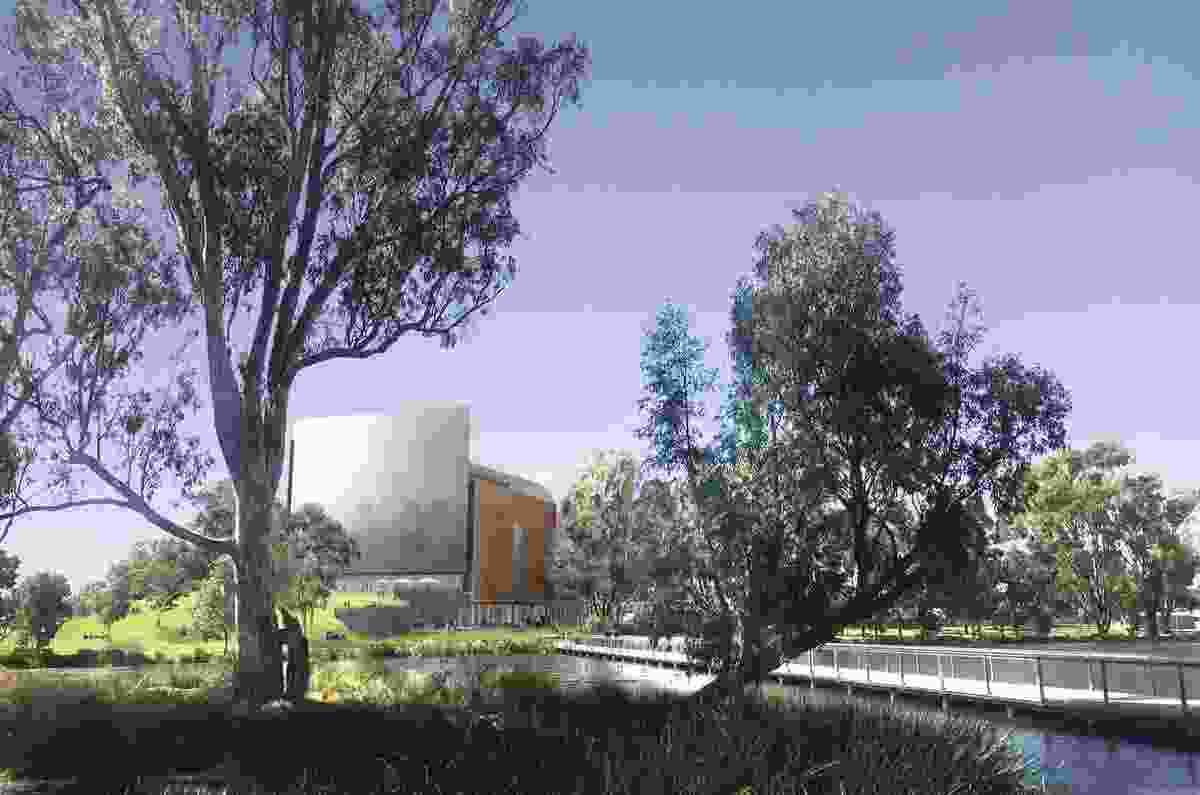 In 2017, a design competition was held for a new Shepparton Art Museum in regional Victoria. The winning design, by Denton Corker Marshall, is due to commence construction in 2019. 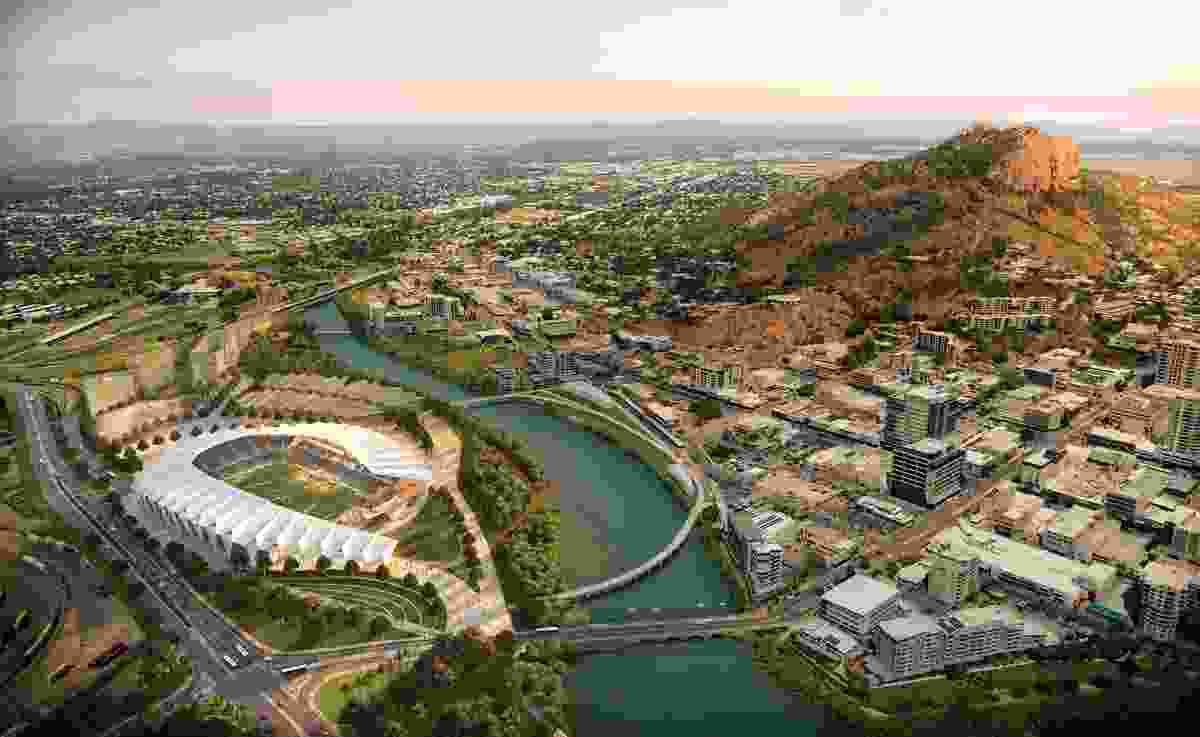 Funding for the North Queensland Stadium project was tied to the federal government’s Townsville City Deal. The 2016 competition was won by Cox Architecture and Counterpoint Architecture. 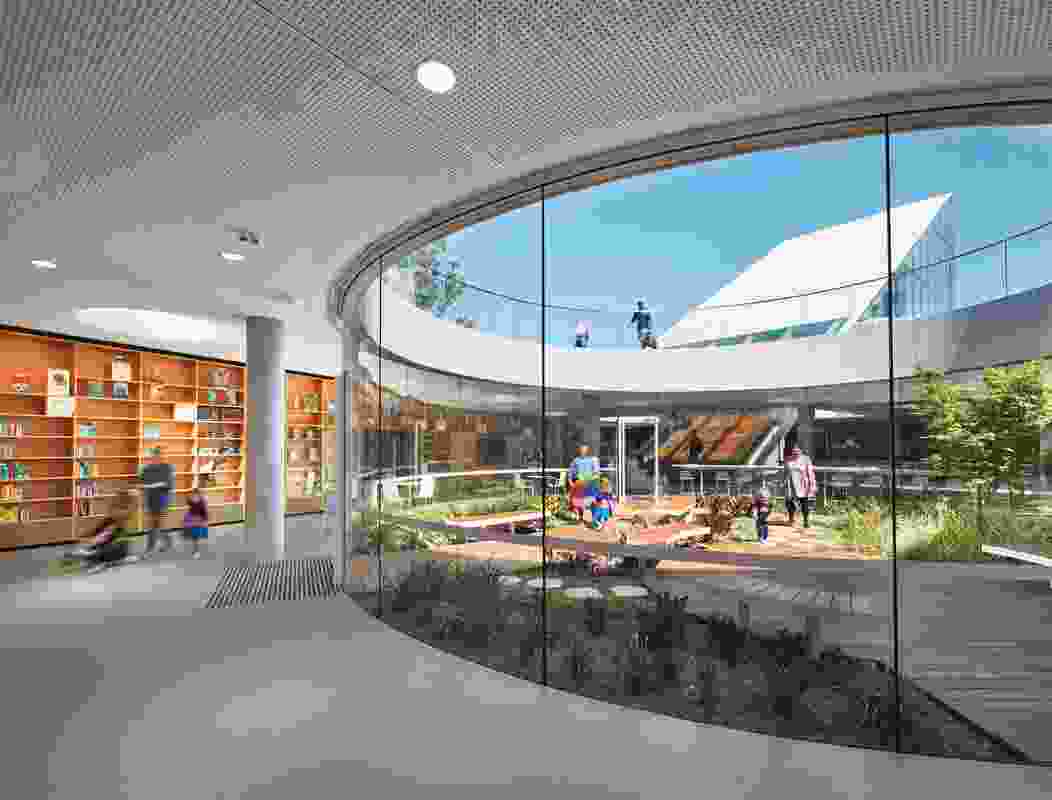 Studio Hollenstein with Stewart Architecture’s Green Square Library and Plaza in Sydney, which opened in late 2018, was commissioned through a City of Sydney design competition in 2012. 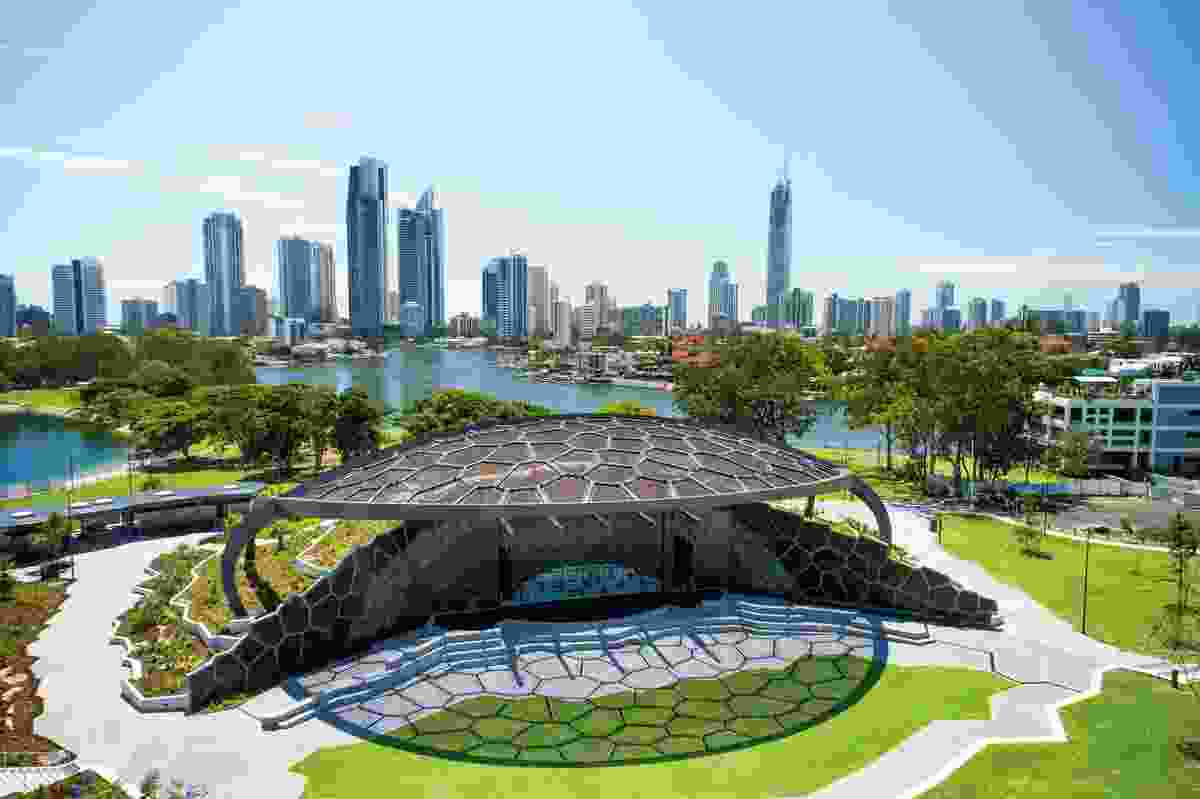 In 2013, ARM Architecture and Topotek 1 won the Gold Coast Cultural Precinct design competition. The first stage of the project, now known as Home of the Arts, is the Outdoor Stage completed in 2018. 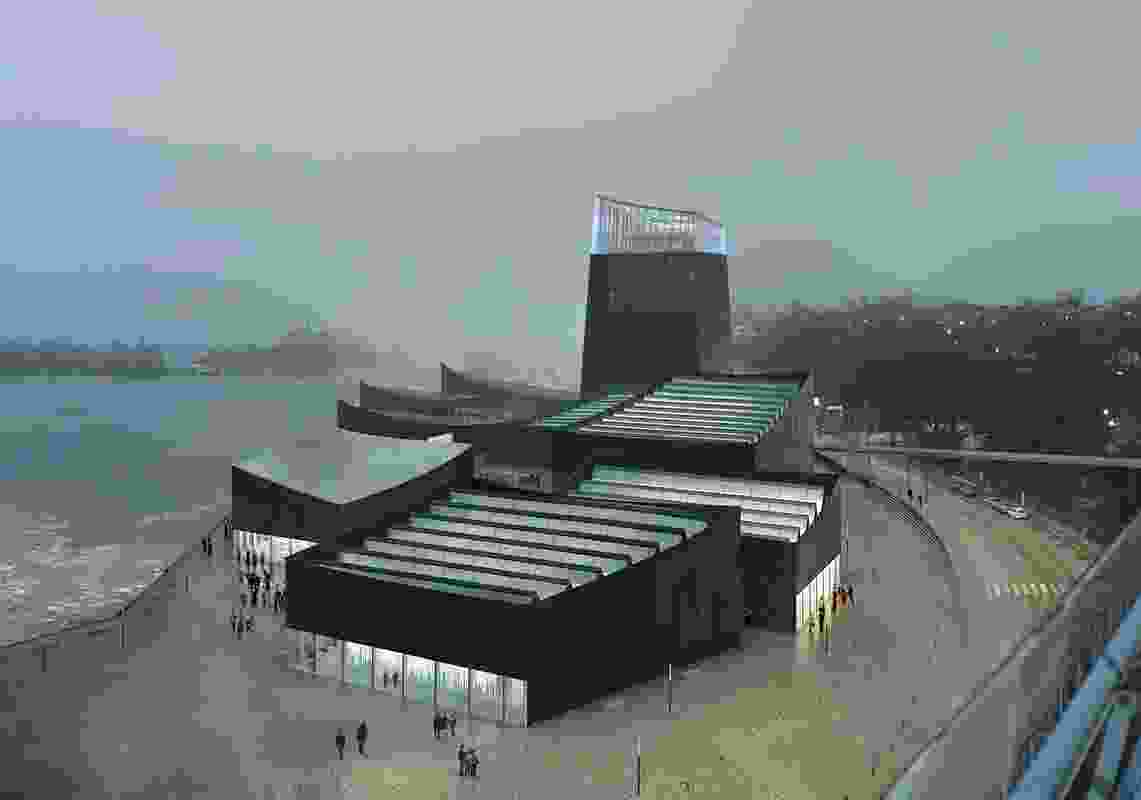 Art in the City by Moreau Kusunoki Architectes, the winning entry in the Guggenheim Helsinki Design Competition (2014). The museum project did not proceed after the City Council of Helsinki voted not to allocate funding.