Justin Mallia reviews Australia's exhibition at the 2018 Venice Architecture Biennale and finds it “an elegant and visually striking composition” that is “eloquently composed and engagingly experiential.”

Ten thousand native Victorian grassland plants are a distinct presence in the Australian pavilion at the 2018 Venice Architecture Biennale. The exhibition, entitled Repair, has been curated by Melbourne architects Mauro Baracco and Louise Wright of Baracco and Wright Architects in collaboration with artist Linda Tegg. It is a response to the biennale theme of “Freespace” that is eloquently composed and engagingly experiential. It raises questions that need attention and is subtly but authentically provocative.

Within the white-box interior of the pavilion, the organic mounds of Grasslands Repair work with the linear Skylight, an LED light installation that sustains the plants, and the interspersed human forms of visitors to create an elegant and visually striking composition. With grasses strategically planted in clusters also outside the building, overall the installation is skilfully woven into the available spaces, convincingly occupying the pavilion in a manner that is grounded and cohesive. The journey of approach, entry and circulation has impact but is not overwhelming, at once unusual and mildly confronting, yet also familiar and sensory. The humidity and temperature of the air, and the smell of the plants and the dirt, are subtle but unavoidably noticeable. Narrow paths meander through the varying topography of grass, drawing the visitor into contact with the grasses and enriching the sensorial experience of the installation. The grass itself is of a beautiful and vast selection, which is a pleasure to appreciate presented in the foreground as the actual display material. These plants are engaging to encounter in such detail and the space is a delight to move around.

In one corner of the pavilion, fifteen short films each present a project that is considered to be an exemplar of the exhibition’s theme of “repair.” These two-channel videos are eerily silent and, through a detached softness of movement and pace, are delivered with potency. Each film is screened twice throughout the day with an intermittent dimming of the lights. This changes the experience of the grasslands and assumes visitors will dwell in the space to appreciate it. It also means it is not realistically possible to view all of the films, which are worthy of being accessible again elsewhere.

Text on the wall at the entrance is the only other information presented in the pavilion. This written description is well conceived and articulated, and reveals the creative directors’ proposition, which challenges architects to creatively consider the grounds upon which buildings are constructed. It addresses pressing issues that architecture should actively consider and negotiate. The concept of “repair” reveals much about Baracco and Wright’s work and ongoing theoretical developments. Their proficiency is evident throughout the installation, while their Garden House (2014) – one of the fifteen projects examined in the short films – is recognizable as an exemplar of environmental repair, and one of several projects that serve as catalysts for wider types of social, economic and cultural repair. Having germinated in Australia, Baracco and Wright’s belief in a wide, holistic role for architecture is worthy of representation in this international forum.

In alignment with these principles, members of a multidisciplinary team are credited as collaborators in the curation of the installation. However, the text at the entry offers only a minimal exploration of this concept, leaving the question of how deeply and broadly the exhibition interrogates the implications of itself unanswered. More readily digestible expert input, analysis and discussion from broader fields would have been valuable to be able to consider.

Allowing an installation to primarily speak for itself is relatively unusual at the biennale, where information is often saturating, instructive and investigative, and research is typically exhaustively presented using direct, didactic methods. Allowing visitors to interpret an installation as a work of art or as a standalone display could be considered a strength but at the biennale, this is a harder point to argue. This is partly because the biennale is huge and tiring to encounter, but also because, for many visitors, this is a one-off chance to experience the work. In the context of such abundant information, it requires significant commitment from a visitor to delve beneath the surface of the immediately apparent, snappy presentation of any one pavilion and think meaningfully about the subject matter presented. While the Australian pavilion is undoubtedly a breath of fresh air, it risks expecting too much patience of its audience, but additionally, through its open posture, it is exposed to interpretations that are broader than its defined intentions. In addition to the focus of the provided description, this installation also raises other questions that may dilute the important and specific architectural messages the creative directors define in their introductory text.

The curatorial description – indeed, the installation’s title – references Linda Tegg’s 2014 work, Grasslands, in which native grasslands occupied the State Library of Victoria. But the gesture of transporting, artificially cultivating and presenting endangered Australian grasses inside a building in Italy unavoidably also situates itself very comfortably within Tegg’s broader work, such as Wolf Study (Mexican Gray), a video work involving a wolf in a motel room, or Horse, a video, performance and photographic study depicting a horse in an elegant neoclassical interior. Among other repercussions, the act of displacement undertaken in the Australian pavilion is of glaring conceptual strength, especially noticeable from the perspective of an international audience, but this reading is largely ignoredin the exhibition itself. The pavilion’s nominated theme of “repair” is really just one facet of a broader discourse happening in this installation.

The great variety of endangered grass species and the difficulty of transporting and cultivating them in Italy are emphasized in the curatorial statement. Although the curators are working on potential places to rehome the plants once the biennale ends, including a botanical garden in Venice and a research institute in Sanremo, there is no formal arrangement in place. Because of this, the installation itself does not seem an exemplar of the philosophy of “repair” that it promotes and, without a presented conclusion, the valuable grass appears to be a sacrificial display item of waste.

Overall the Australian pavilion is highly commendable. It successfully disrupts the viewing conditions through which architecture is usually understood, while providing a specific architectural framework to what is presented. While maintaining its open qualities, it would have benefited by also more rigorously facilitating the architectural unpacking, interrogating and presentation of the consequences of itself.

Addendum: A 280-page catalogue and a complimentary 12-page newspaper were published to accompany this exhibition. The plants grown for the exhibition have been re-homed in the Botanic Gardens of Padua, in the greenhouse. To read more about some architectural implications of the concept of repair see the Australian Institute of Architects’ Environmental Design Guide. 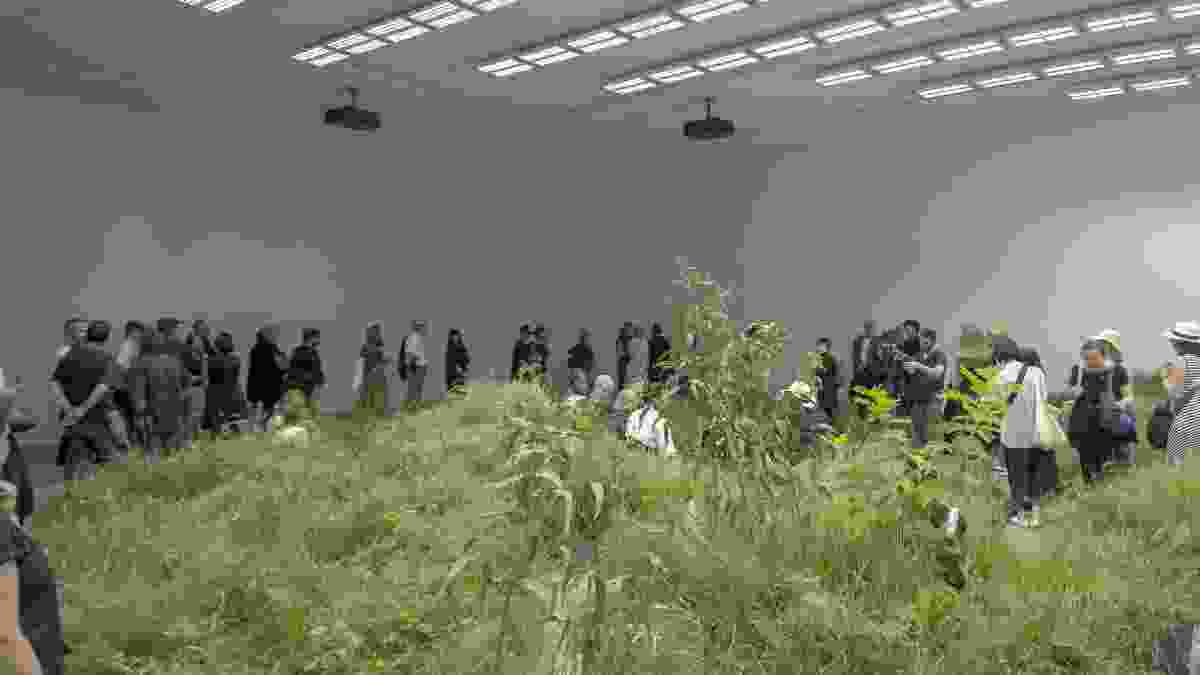 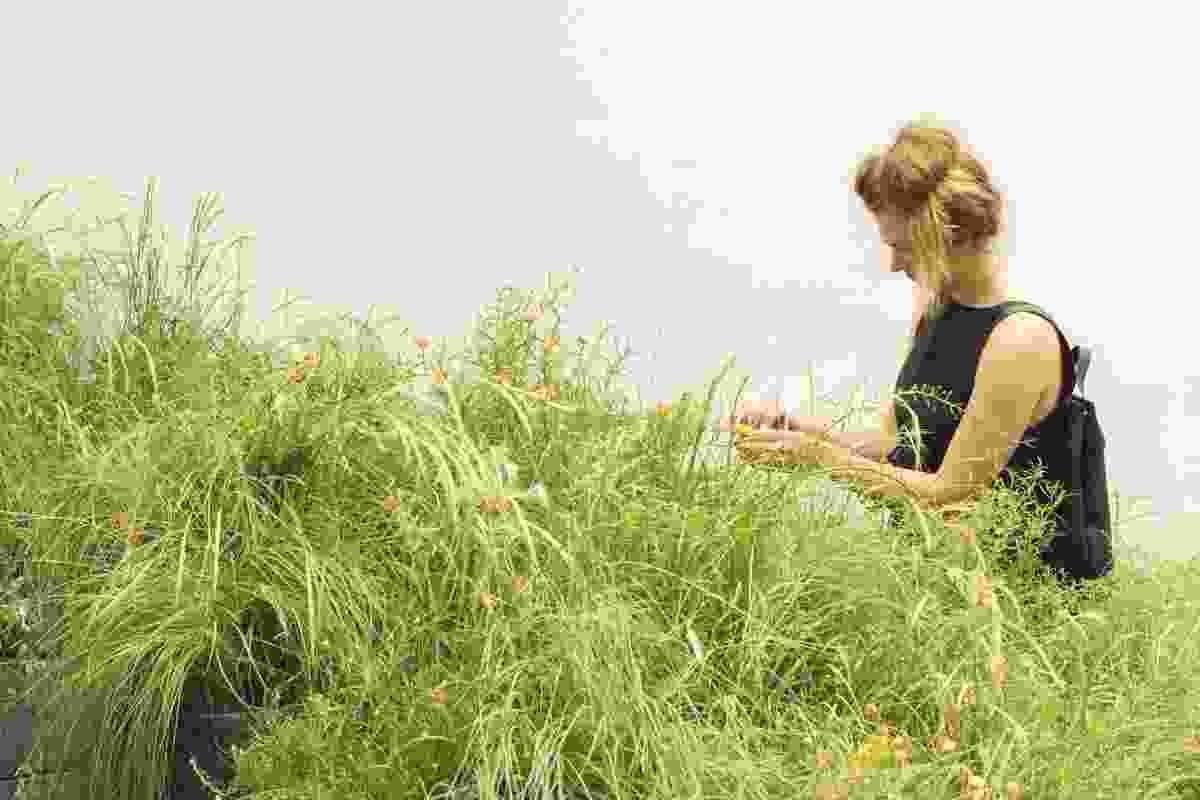 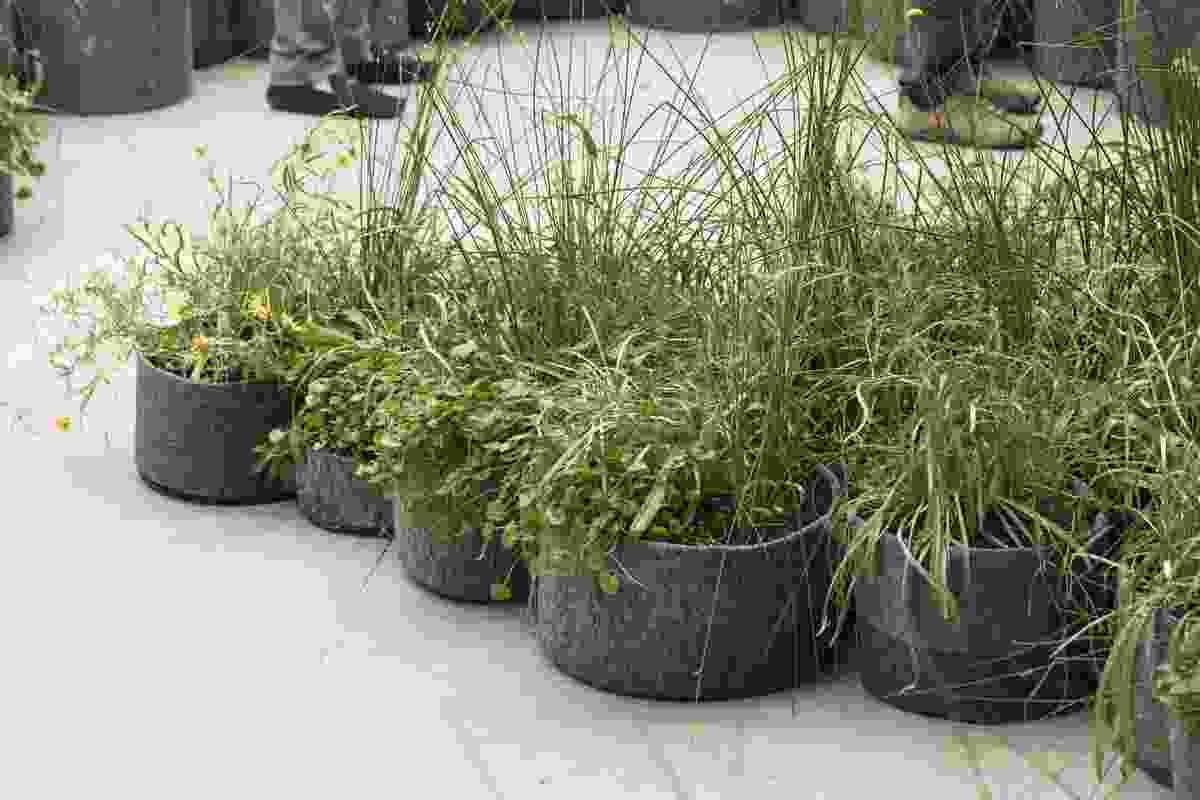 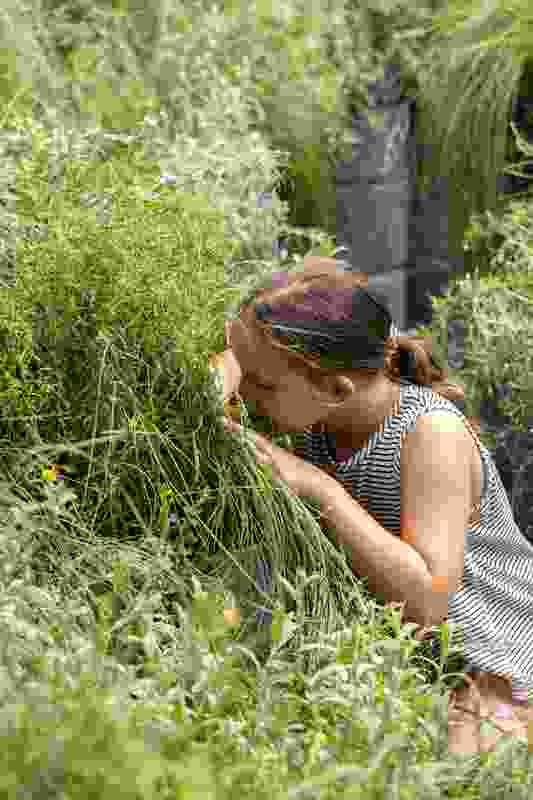 The grasses are engaging to encounter in detail. 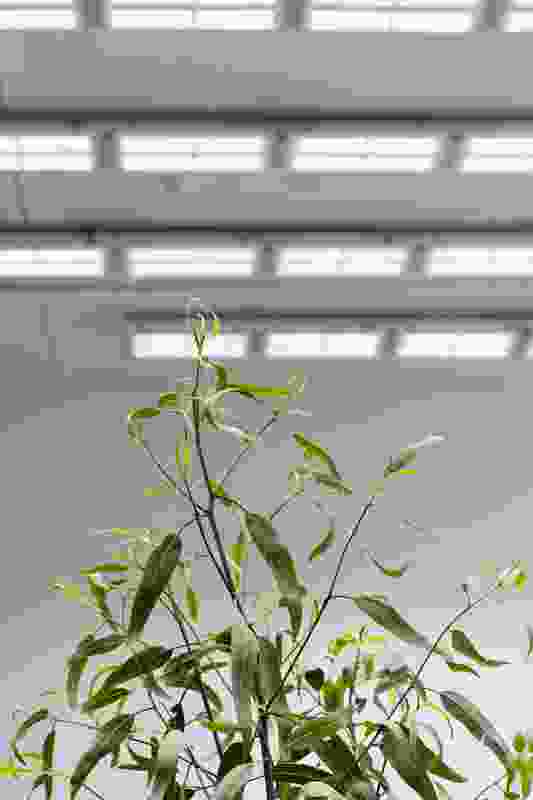 The plants are sustained by a lighting installation which simulates the energy of the sun. 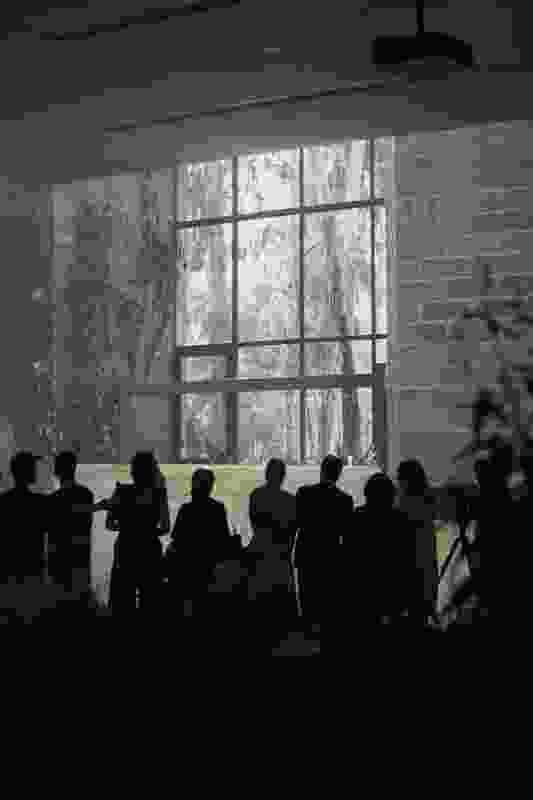 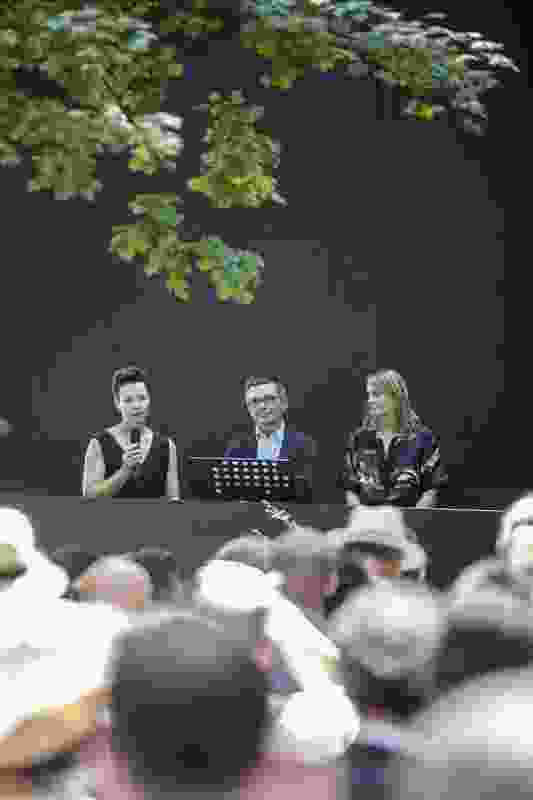 Creative directors Louise Wright, Mauro Baracco and Linda Tegg at the opening of the Australian exhibition in Venice.