The city-making potential of architecture

The 2019 Architecture Symposium, Sydney, staged for the second time at the Art Gallery of New South Wales, explored sixteen contemporary architectural projects through the lens of “responsive urbanism.” Curated with a blend of infectious optimism and insightful criticism by Laura Harding and Adam Haddow, the projects were selected as demonstrations that “re-affirm the power that architecture exercises in the collective project of ‘making the city.’”

Searching for inspiring antidotes to the economic and political expediency shaping the contemporary Australian city, the curators selected projects that transcended the quantitative framework of planning regulations to create “qualitative density”: density that creates moments of energized urbanity by elevating the physical, social and environmental amenity of the city.

As both the speakers and the curators were aware, these works of optimistic and constructive urbanity are in stark contrast to the normative production actively undermining the shape and life of our cities: the brutal imposition of many urban infrastructure projects, the unstudied assumption of a tabula rasa condition in many large-scale urban regeneration projects, the impoverishment of housing types and the devastating amnesia about how housing and street life can interact in the creation of density.

What lessons, then, can be learned from these sixteen inspiring projects? How can we articulate the qualities common among these diverse works, and could this be used to expand the reach of responsive urbanism? With these questions in mind, I started wondering if a kind of qualitative toolbox could be made from the ambitions and attributes of these urban interventions. As the day progressed, at least four key strategies were evident across the projects.

Channelling the history and geography of cities

Prioritizing a research-based approach to understanding the sites and cities that formed the context of their projects was a common thread in many of the presentations. This commitment to understanding sites beyond their physical conditions, tapping into literal and abstract geographies and histories of contexts, successfully expands the range of ways our cities can be understood.

The strategic elegance of Chrofi’s Maitland Riverlink, an over-scaled frame for the Hunter River, became more compelling with Tai Ropiha’s explanation of Maitland’s decline following the 1955 floods. The city’s prosperity waned, its river transformed from life source to existential threat. The act of reconnecting town and river within a relatively small project is a powerful example of contextual engagement. The project highlights how a responsive architecture can both accentuate and resolve the challenges of both geography and history and act as a catalyst for urban transformation.

Peter Elliott’s detailed historical survey of the Victorian parliament building in Melbourne reframed it as one that has been, for almost 170 years, incomplete. This description of incompleteness felt almost liberating for the way it recognized the addition of the Members’ Annexe as part of a continuum of accretive adjustments rather than a singular act responding to a fixed and complete existing condition.

An unseen history informed the design for the Waterloo Apartments in Sydney. Faced with an apparently featureless site surrounded by demolition and construction, Chenchow Little’s competition-winning scheme drew on southern Sydney’s swampland history to inspire a mangrove-like structure that became the defining element of this apartment project.

Another characteristic evident in many of the projects was a tendency to actively support and create a tight urban grain in both urban and suburban contexts.

Richards and Spence’s Cornerstone Stores in the Gold Coast suburbs was emblematic of this, exemplifying the practice’s remarkable capacity to transform retail briefs into exquisite demonstrations of what a fine-grain contemporary Australian city can look like. Eschewing the typical eighty-square-metre retail space for highly curated and affordable seventeen-square-metre tenancies, their playful resolution of serious urban intent was a standout for its mastery of scale in both architecture and urban design.

This tight-grain approach is also a potential outcome of larger developments in which part of the overall project commission is spread between multiple architects. Nightingale Village in Melbourne by Kennedy Nolan and Loftus Lane in Sydney by Silvester Fuller were examples of this approach being successfully implemented. As Kerstin Thompson outlined in her presentation, the city can withstand one or two bad larger projects when the texture of the city between them is of good quality and amenity. Valuing the architectural figure and interstitial space in equal measure, Kennedy Nolan and Silvester Fuller’s projects foreground responsive urbanism as a custodian of the tight, urban grain of the city.

Enriching the city through urban repair

Responsive urbanism was framed as a form of urban repair in many projects, and Nigel Bertram’s presentation of the RMIT University precinct was an extraordinary example of this. This project transformed an existing urban campus with a series of surgical incisions that literally found new sites and connections within the existing – a kind of archaeology of interstitial opportunities that breathes new life into a modernist work. The process of studying plans and then finding and making new sites through the act of selective demolition highlighted a very thought-provoking concept of urban repair that could be extended beyond the campus to energize the city itself.

Reflecting on the RMIT campus renovation, Bertram acknowledged the generosity of Lyons director Carey Lyon in setting up a form of engagement that allowed multiple architects to work closely and strategically on the campus renovation. The importance of the preconditions of a project and of the nature of engagement of the architect was recognized as essential to the success of any project. Angelo Candalepas discussed how the increased use of the competition model in Sydney has successfully enabled a much more diverse group of practices to operate within the urban realm, after a very limited “cartel” of practices controlled the city in the 1990s. However, he also suggested that more sophisticated models of engagement would be needed in the future to get the best from architectural commissions.

For actively reinventing both the supply and demand side of urban housing, the Nightingale concept continues to be a revelation. It has gathered a groundswell of support and admiration as a concrete example of an architecture-driven proposition for a fairer and more sustainable urbanity. Expanding this model from a single project to an urban village of seven projects will be a fascinating test of both the scalability of this concept and the richness of the urban environment on offer.

The day concluded with a discussion of the works between the curators and guests Lee Hillam and Andy Fergus. The success of collaborative models of commission, the embrace of complexity in the urban realm, the quality of work repairing the city, and the recognition of the city’s incompleteness and its rich historical layers were all celebrated in the final wrap up. Of course, the panellists also bemoaned that the dexterity of response shown by these architects is met with a blank wall of desensitized equality in the planning process. There was also an inevitable speculation on the possibilities of enacting controls beyond the quantitative – again, the idea of some kind of qualitative toolbox for architecture. Having been fed a diet of Christopher Alexander’s A Pattern Language in my early education, I am sceptical that we could extract and regulate the density of thinking fundamental to the quality of projects shown. Instead, I enjoyed the symposium as a reaffirmation of the potential of the architectural project in city-making while celebrating the capacity and camaraderie of current architectural culture in Australia.

Design Speaks events are organized by Architecture Media, publisher of ArchitectureAU. The 2019 Architecture Symposium, Sydney was supported by Oliveri.

The city-making potential of architecture 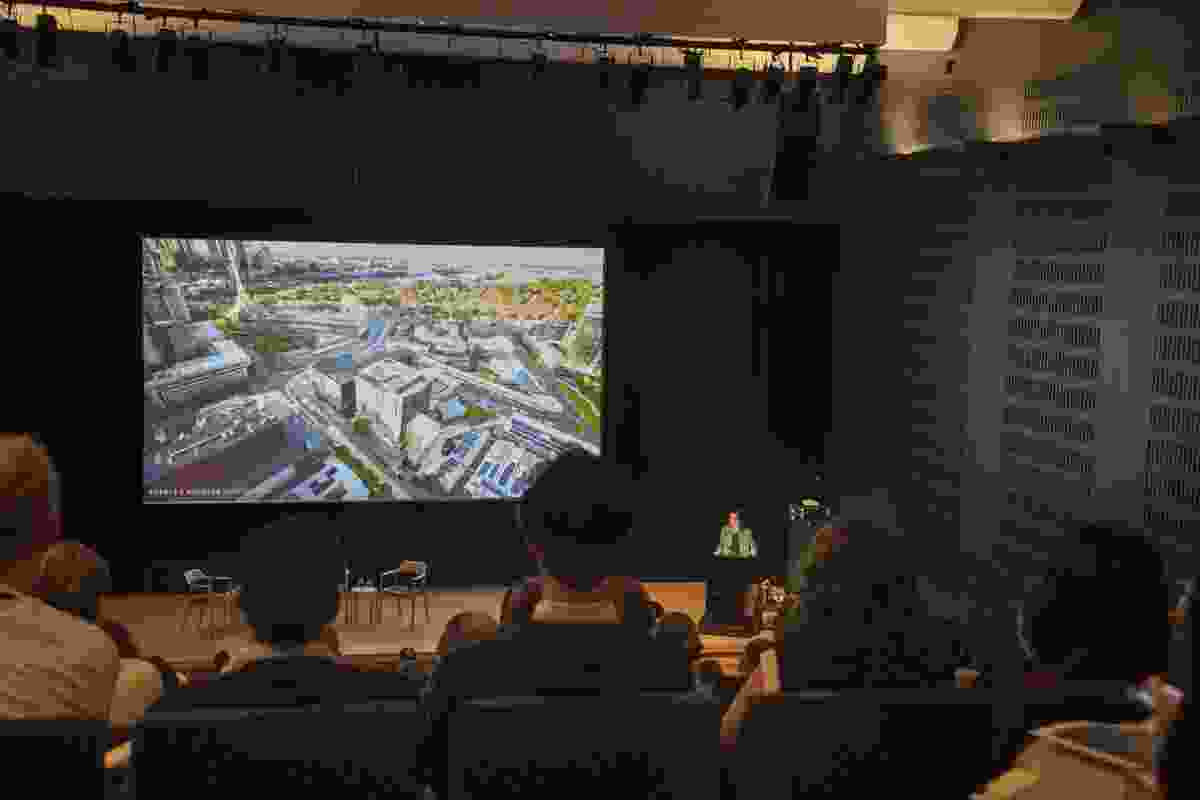 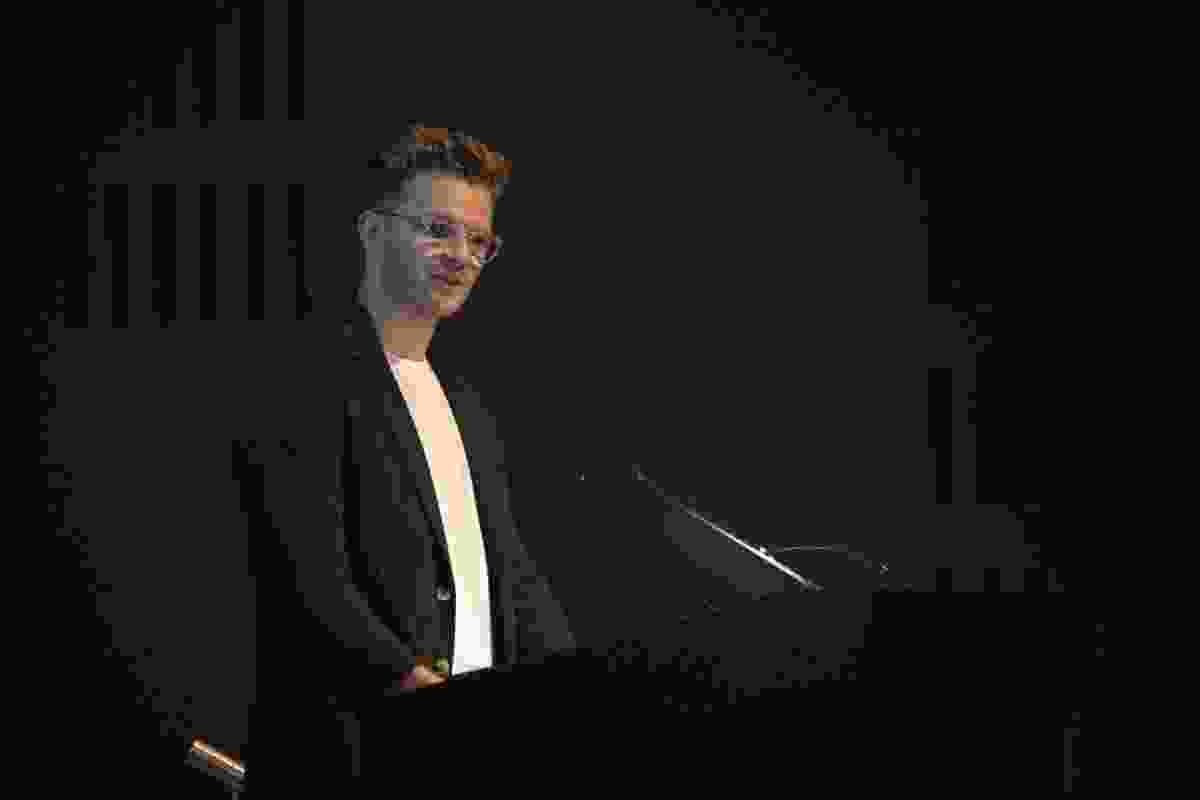 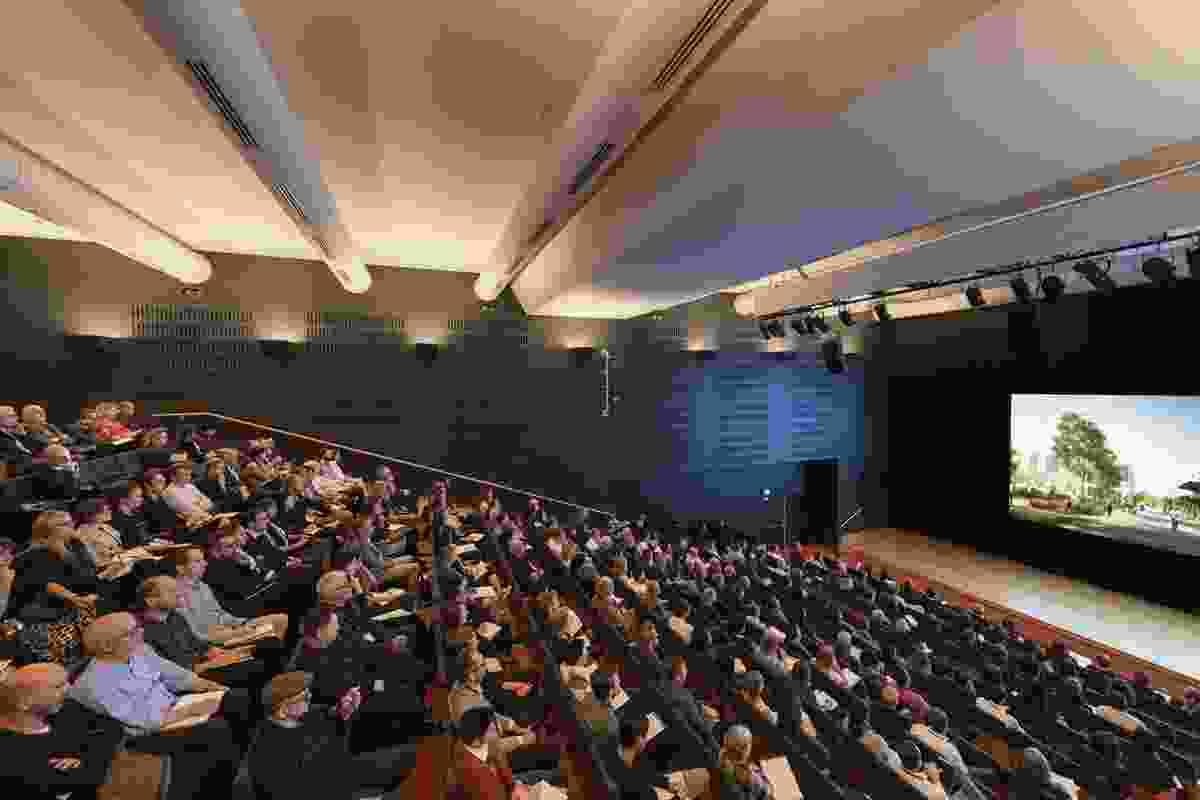 The Architecture Symposium, Sydney was held at the Art Gallery of New South Wales on 24 September. 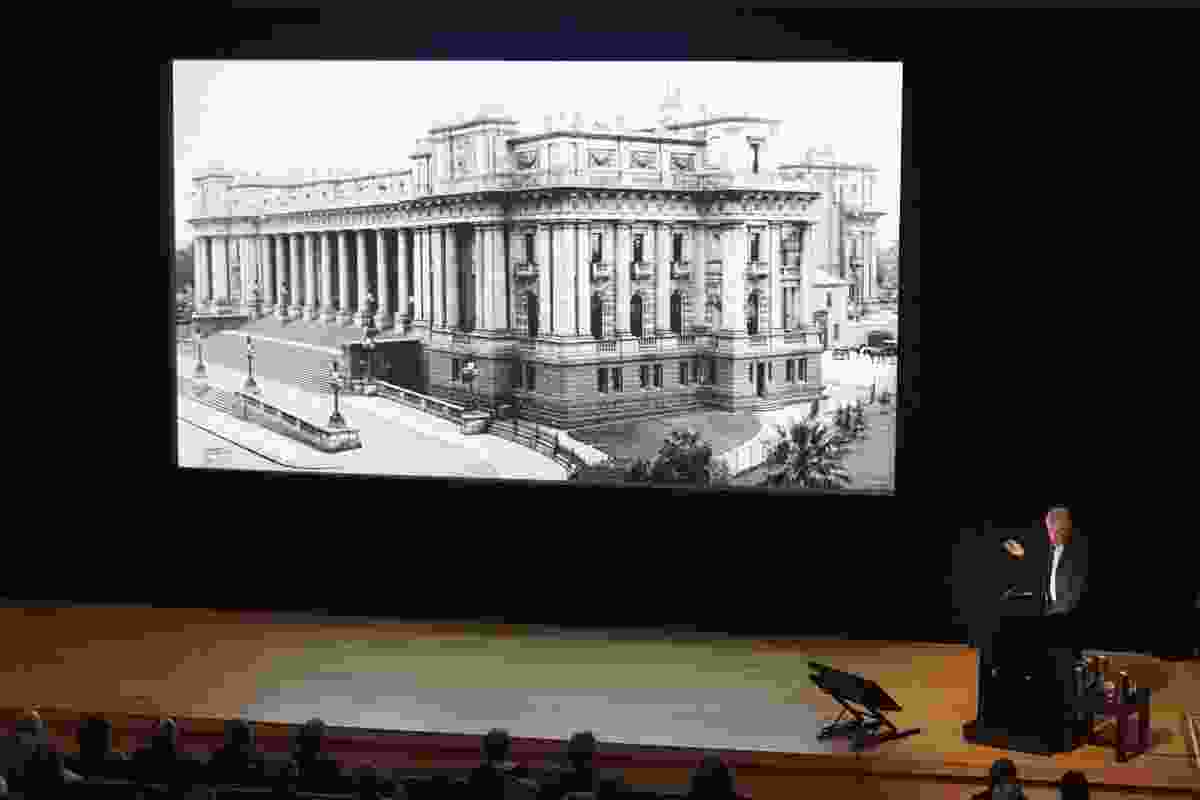 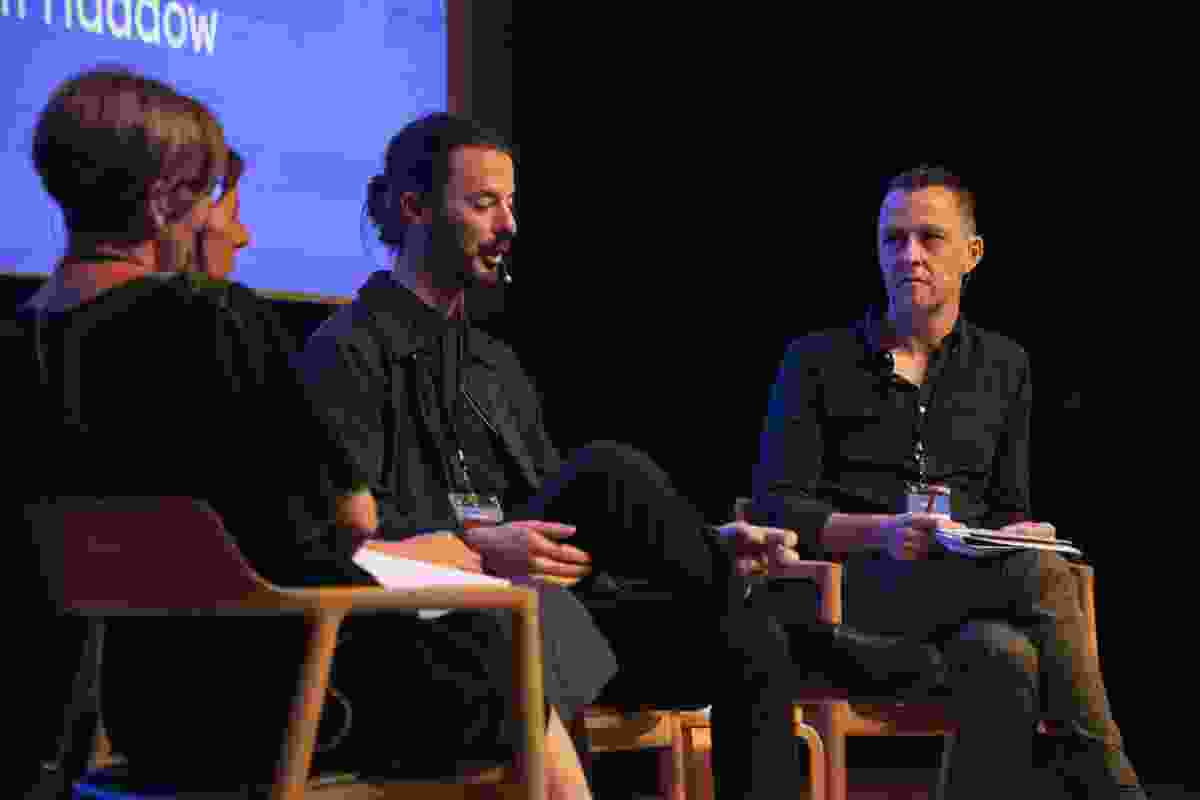 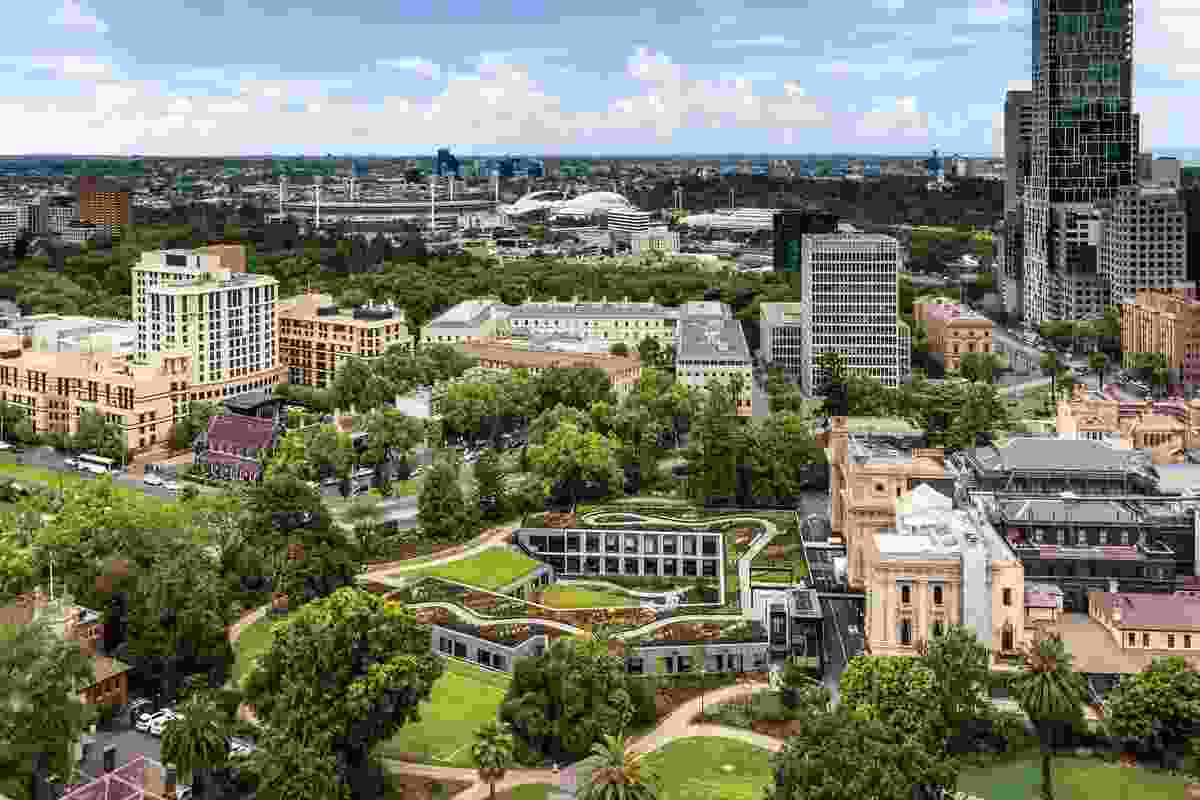