Inspired by the seven seasons that local Wurundjeri people divide the year into, a new park in Melbourne brings landscape back into playtime.

Located on the former Royal Children’s Hospital site, the new park and playspace has injected fresh life into Royal Park.

Melbourne’s Royal Park is the city’s largest inner-city park, and arguably its most unique. The park covers 170 hectares and is of state significance due to its size and Australian native landscape.

To some, it is an unremarkable expanse of brown grass, sparsely dotted with red gums, she-oak and the occasional jogger. To others, it’s a prized escape from daily urban life, offering peaceful solitude with long views to the horizon. Either way, it has generally been underused on the best of days. But a new park and playspace on the former Royal Children’s Hospital site has dramatically injected new life into this great park, and for the first time, provided it with a formal entry point that captures the attention of passers-by.

The project has its roots in the controversial 2005 planning decision to rebuild the Royal Children’s Hospital within Royal Park. The state government at the time promised to return the area at the corner of Gatehouse Street and Flemington Road to parkland, clearly to make the decision more palatable to the public. There was to be “no net loss” of public open space.

“We wanted play to be intrinsically connected with the landscape, not be seen as a bounded space, or to feel or look like a conventional playground” – Sky Haldane

In 2012, The City of Melbourne began an extensive community consultation phase to inform the design of the new park space, with more than 660 community members and 150 children sharing their ideas and vision for the site. Nature-based play was identified early as something that the community wanted to see included, and was enthusiastically adopted by the council and the Victorian Government Department of Health and Human Services, who partnered in the project.

After the old hospital buildings were demolished, the City of Melbourne design team had to quickly develop a grading plan so the building spoil could be distributed on site. Some of this forms a giant mound of earth covered in lush green turf – easily the most prominent feature of the project – offering long views to the grassland circle to the north, and back across the city skyline to the south. It’s amazing to see how much excitement this bit of topography generates.
Natural materials have been used wherever possible in the design of the playspace; there is little of the usual brightly coloured, off-the-shelf kit you’d expect at a regular playground.“When we engaged with children on the park design, climbing trees and water play were popular among all ages,” explains councillor Arron Wood, Chair of the City of Melbourne’s Environment portfolio.

I overheard parents commenting on how surprised they were that something like this was public. “It’s like something you’d expect to pay for,” commented a clearly impressed mother.

Skye Haldane, principal landscape architect at the City of Melbourne, cites Perth’s Rio Tinto Naturescape and the Ian Potter Children’s Garden at the Royal Botanic Gardens Melbourne as precedent studies. However, what sets the Return to Royal Park playspace apart is its open connection to surrounding parkland. “We wanted play to be intrinsically connected with the landscape, not be seen as a bounded space, or to feel or look like a conventional playground,” explains Haldane.

On a more intimate level, gullies provide a sense of enclosure and house climbing-courses made from undyed rope, logs and giant stone boulders. According to Haldane, “the gully spaces are set up against the existing woodland to embed these within the vegetation fabric, and to encourage play activity to extend into the unstructured spaces of the park.”Central to the playspace is a controllable watercourse – popular with my two-year old nephew who accompanied me on my visit – where children can dam the creek and release a flood on their friends downstream. I overheard parents commenting on how surprised they were that something like this was public. “It’s like something you’d expect to pay for,” commented a clearly impressed mother.

Leading up from here, the ground is densely planted in tussocks and ground covers. Three slides of varying heights propel children down the slope, who then clamber back up the stepped stone embankment to re-join the queues, providing graduated challenges for all ages.

With so many kids racing around the place it’s amazing to see how little damage has been done to the garden beds thus far. The new parkland includes more than 1100 trees and 17,500 other plants and grasses, of which over 80 percent are indigenous to Melbourne, and all are native to Australia. The planting selection is shaped by the seven seasons that Wurundjeri people divide the year into, creating a connection between the local seasons and play. The water play elements are associated with the “dry season”; while a diminishing sequence of metal hoops is an interpretation of an eel trap.

“Each area includes species that are important to that season, for example the silver wattle blooms in August and marks the transition from ‘wombat season’ [winter] to ‘orchid season’ – the start of spring,” explains Haldane.

The planting is an important component of the park’s goal to build the empathy that children have for nature, and to allow them glimpses for discovery and understanding of Melbourne’s indigenous landscape.

Above all, the project has not only filled a gap in Melbourne’s public playground offerings, it has increased the value that the public see in Royal Park. And given its long history of incursions, this can only be a good thing for the park’s future. 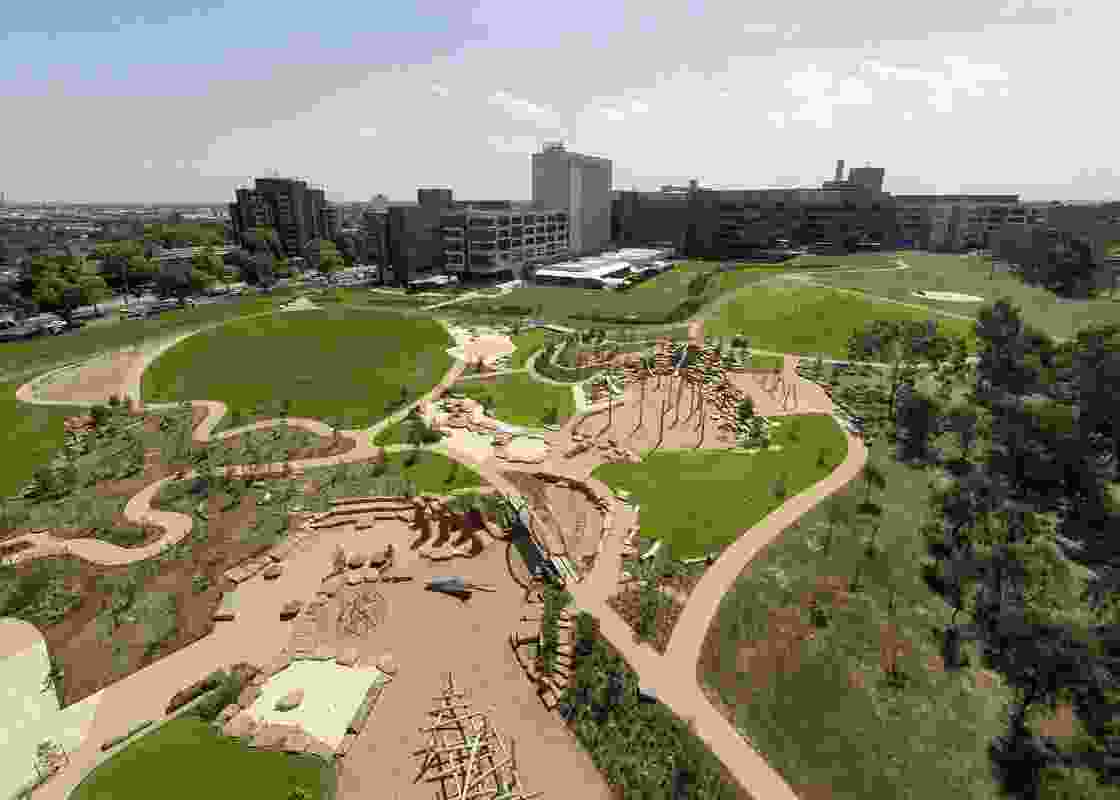 Located on the former Royal Children’s Hospital site, the new park and playspace has injected fresh life into Royal Park. 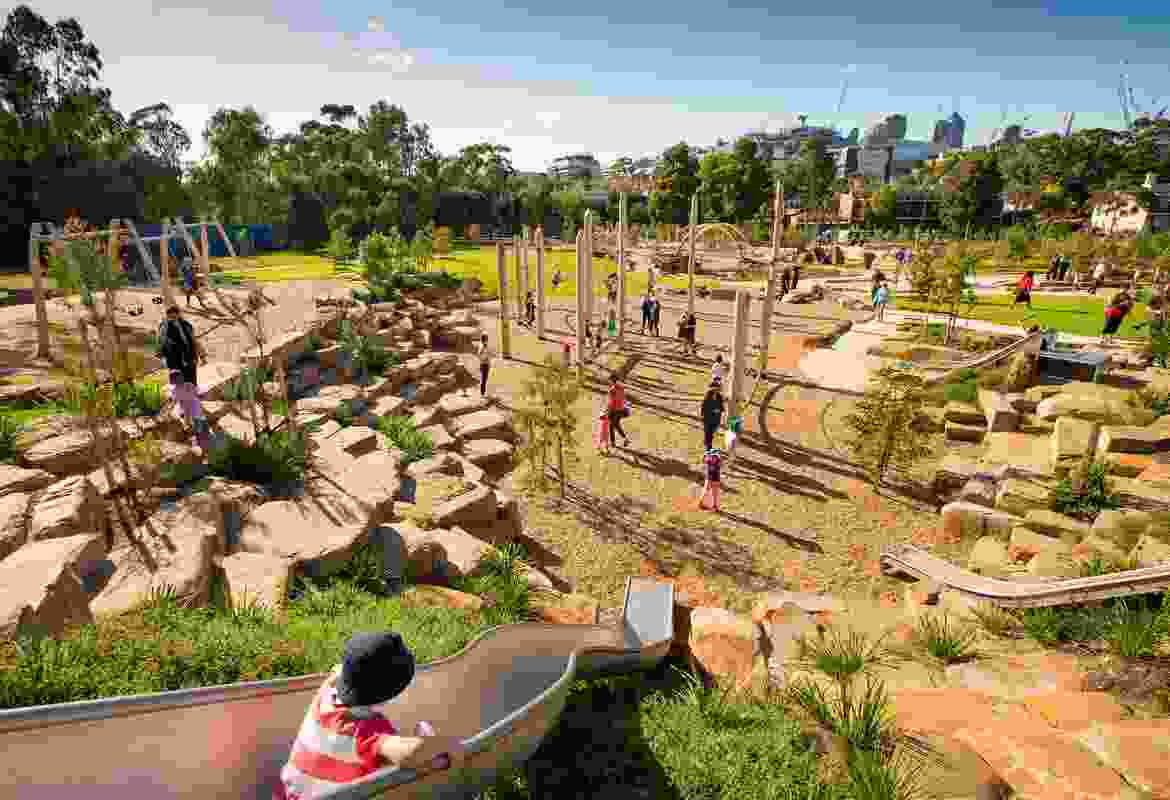 The City of Melbourne consulted 150 children on the design of the new playspace. Nature-based play was identified early as something that the community wanted. 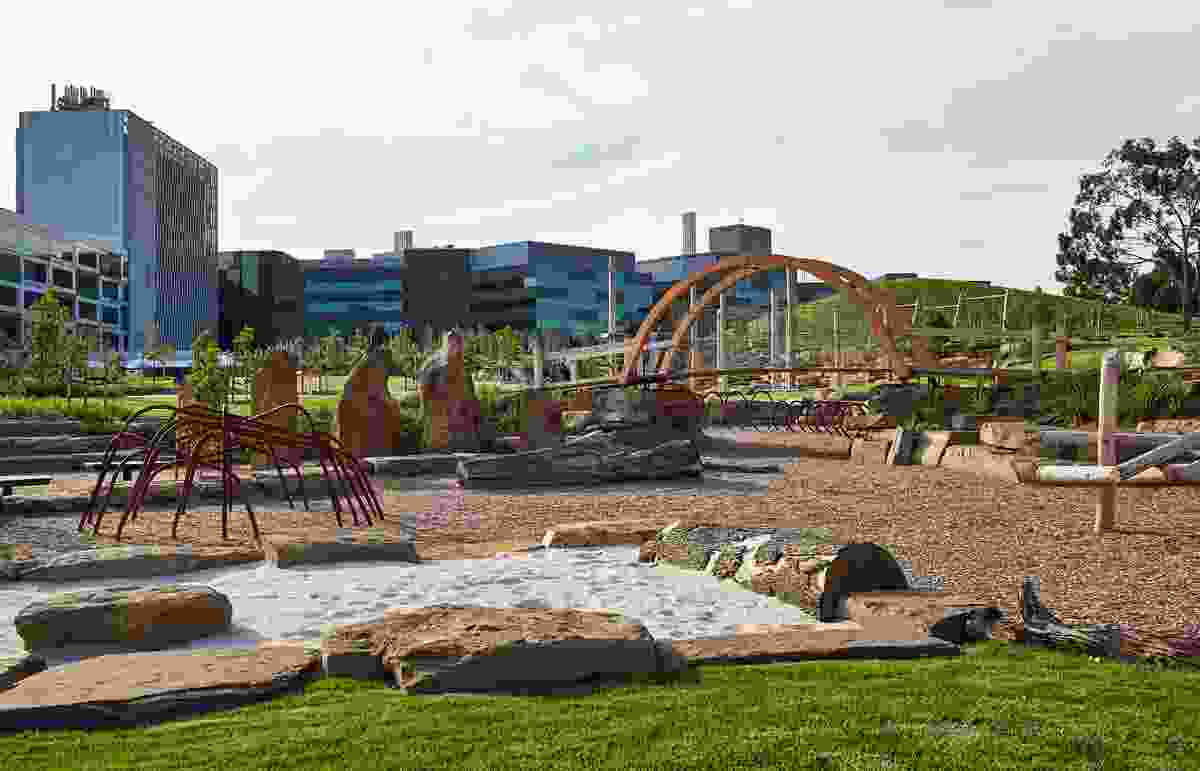 The designers wanted play to be intrinsically connected to landscape. 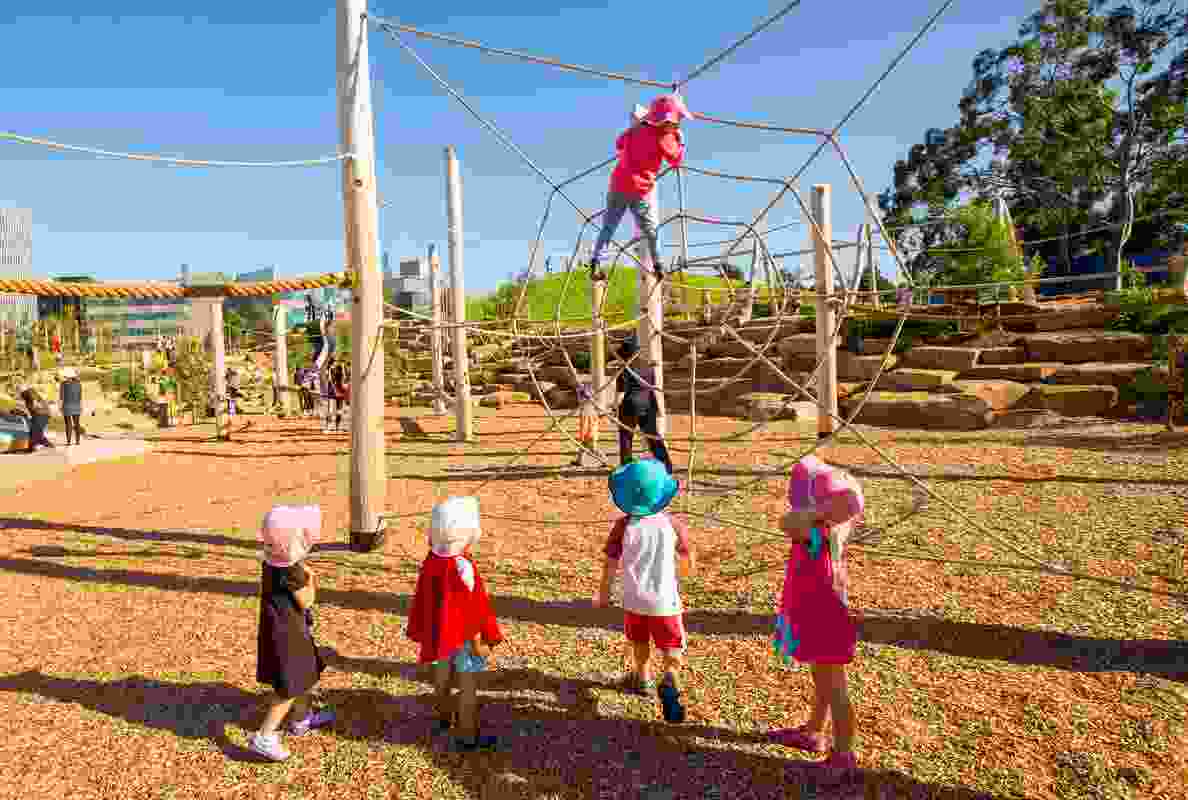 Consultation with children prior to the park’s design revealed climbing trees were popular among all ages. 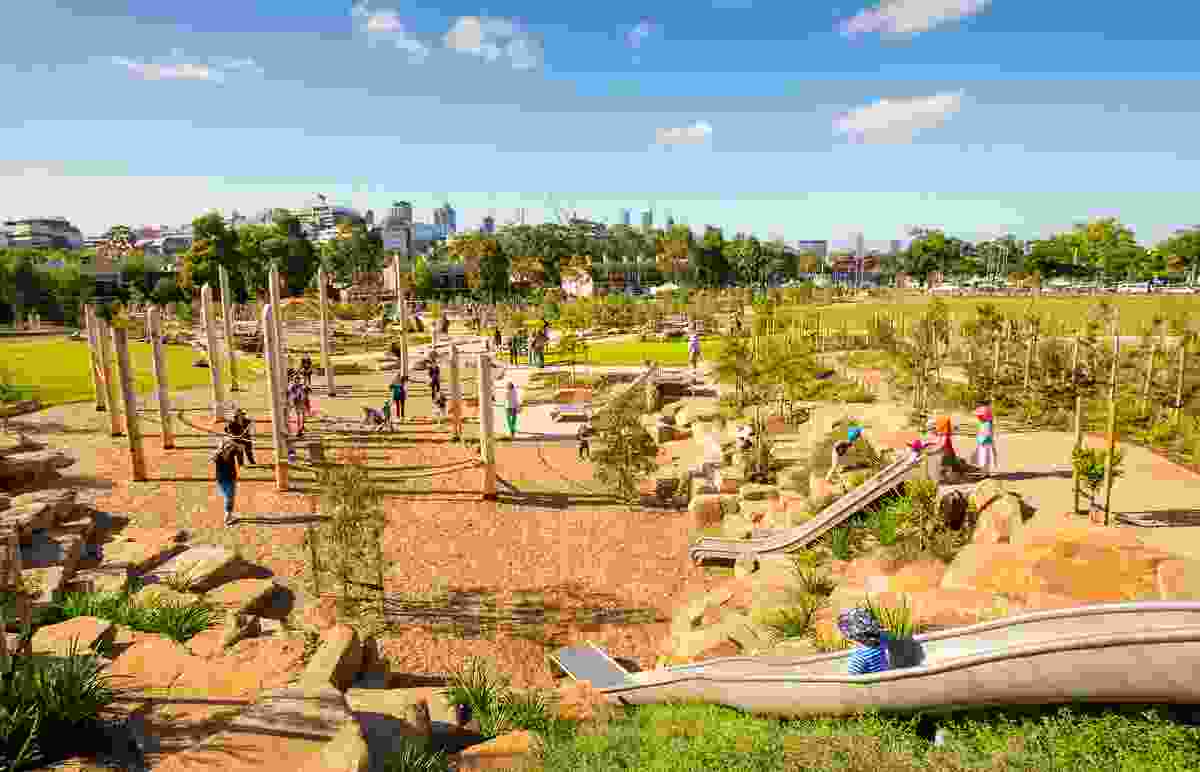 Three slides of varying heights provide graduated challenges for children of all ages. 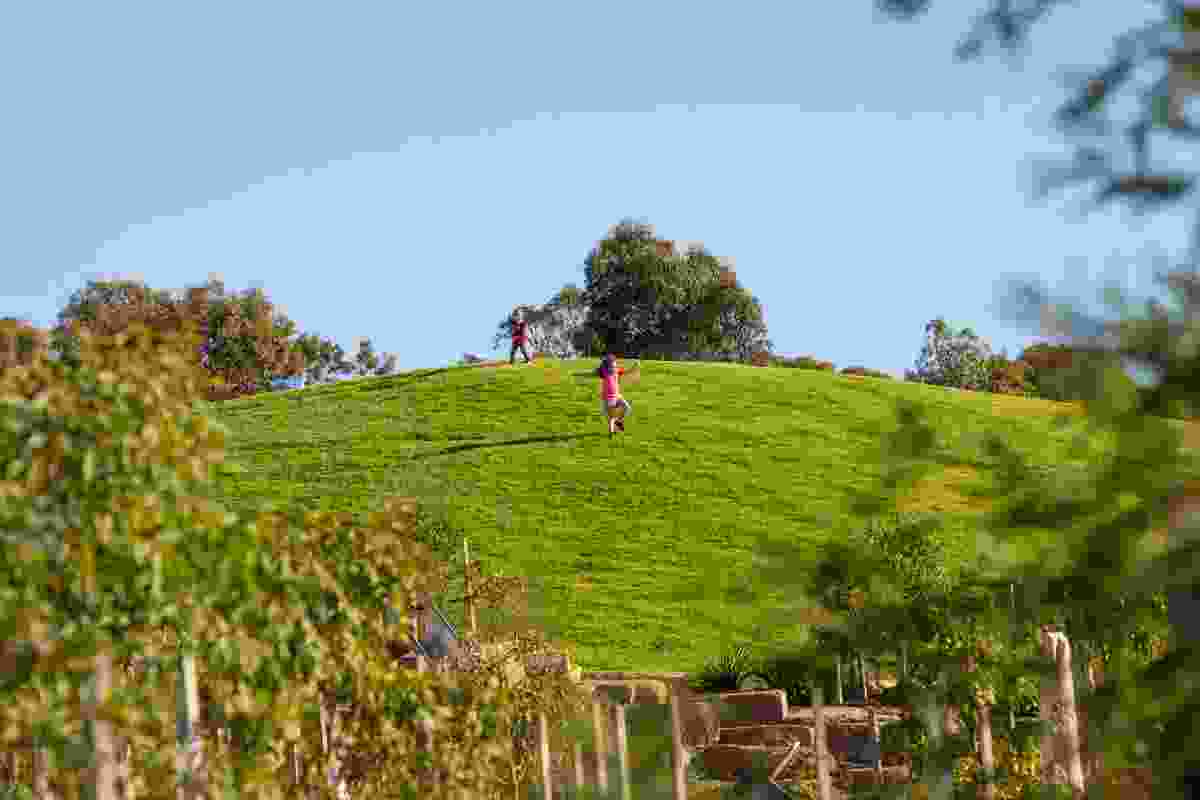 Building spoil from the demolition of the old Royal Children’s Hospital was used to form a giant mound of earth covered in lush green turf.