In North East Arnhem Land, the realization of a cultural centre – led by the Yolngu people – sets an important precedent for the creation of sacred Indigenous architecture.

The Garma Cultural Knowledge Centre, located at Gulkula in Wiwatj (North East Arnhem Land). Architecture is used by the Indigenous clients as a medium to convey oral histories and tell their story.

Completed in 2014, the Garma Cultural Knowledge Centre sets an architectural precedent based on two-way knowledge transfer, a long-established Yolngu1 practice of combining Indigenous customs with introduced ways to negotiate a creative synthesis. Here, that synthesis was with architect Simon Scally of Build Up Design, and the result is a powerful and distinctly Yolngu place – a building that expresses Yolngu’s interconnected approach to politics, social identities, ancestral law, kinship relations, education and religion, and exerts their ownership of the land. While joyful and light, the project exudes gravitas, highlighting the significance of place, sacred knowledge and knowledge transfer to Yolngu.

The Knowledge Centre is located at Gulkula (known as Djalkiri Wanga in Yolngu Matha, the Yolngu linguistic family) in Miwatj (North East Arnhem Land). The late Mungurrawuy Yunupingu, a revered cultural leader from the Gumatj clan within the Yirritja kinship group, described Gulkula as “an all-encompassing philosophical, physical, cosmological, theoretical place” where Yolngu “have danced from the beginning.”2 It is a sacred place, cosmologically associated with many Wangarr (Dreaming) stories: it was at Gulkula that the yidaki (didgeridoo or didjeridu) was brought to the people, an act that imbued the land with spiritual properties from the escarpment above to the ocean below. The sound of the yidaki remains a call to the clans of Miwatj to unite in ceremonies that have been performed at Gulkula since time immemorial.

The building is located on the sacred escarpment with spectacular views down to the ocean. Telling stories through architecture was an essential component of the design, with a series of complex Wangarr narratives layered into the project. The floor plan, for example, references the shape of an anchor, with a round window at the front of the building referencing the anchor’s “ring.” The anchor symbol is embedded in Yolngu cultures as a result of their historic relationship with the Macassan people from modern-day Indonesia. Over centuries, it has become a symbol rich in significance, even appearing in the Wangarr story of the female warrior Bayini, the spiritual protector of the land. Gumatj clan leader Galarrwuy Yunupingu AM describes the anchor’s significance:

The anchor represents unity and strength. It anchors Yolngu to our land and makes real our ties to the ceremonial meeting ground at Gulkula. Our guests are anchored to us and share in our cultural strength.3

Many sacred narratives are incorporated into the building’s design. For example, the late Gulumbu Yunupingu’s internationally famed work Garak, The Universe – an interpretation of Yolngu cosmology – was interpreted as a series of laser-cut Corten steel panels installed along the balconies as privacy and sun shields.

Elsewhere, yellow-painted external panels and dark red timber work – using the local and culturally significant gadayka, or grey stringybark (Eucalyptus tetrodonta) – replicates the colours of the ochre that represents the blood of the region’s Yirritja and Dhuwa kinship groups. This colour palette demonstrates clan affiliations, frees users of the space from the potential dangers of mystical powers, and links the past to the present. In The Handbook of Contemporary Indigenous Architecture, Shaneen Fantin postulates the material selection may demonstrate ancestral affiliations:

To use a particular material or resource is to imbue the thing one is building, or creating, with the stories and qualities that the resource contains in ancestral law. For example, stringybark (Eucalyptus tetrodonta) for Yolngu people has a moiety (Dhuwa) that links to a number of important ancestral histories associated with ethno-architecture from Arnhem Land. A building or structure made from stringybark has, therefore, an identity anchored in the Dhuwa moiety. Metal or steel products have been categorised by the Yolngu under the opposite moiety (Yirritja) and are associated with a different set of stories, many originating with the Macassan history of northern Australia.4

In this project, the choice of steel and metal with timber flooring and posts may align the building with Yirritja kinship law, history and the identity of the Gumatj Clan who developed the building. Importantly, to allow Aboriginal people to use the building with ease, it is designed to accommodate Yolngu socio-spatial preferences and avoidance practices – it has multiple entries and exits to enable people to move away from one another as needed, while allowing occupants to stay continually connected to the surrounding landscape.5

The Garma Cultural Knowledge Centre was initially conceived as a training centre and a venue for a range of cultural activities, but the agenda for the centre has evolved. Yolngu have always rigorously resisted outside control and occupation of their lands and view themselves as unceded. As such, discussions regarding Yolngu futures, land use and other matters need to be conducted in an appropriate setting, at a significant place on Yolngu Country. The Knowledge Centre dispels any notion that Yolngu have been alienated, disempowered or subjugated in their engagement with the dominant non-Aboriginal Australia.

Yolngu activists, artists and performers have been at the global forefront for decades, and this project has broken new ground in the field of Indigenous architecture, as Kelly Greenop and I explain in The Handbook of Contemporary Indigenous Architecture:

This appears to be the first Australian example where Indigenous clients have exerted absolute control over their cultural knowledge, using architecture as a medium to convey oral histories and to tell their story. During the design process, the meanings and symbols embedded into the design at the request of the client were not conveyed to the architect.6

The design defied convention by using ancestral histories as the basis of design, incorporating stories of divisions, boundaries and ownership. As Carroll Go-Sam notes, “if you put it in a building it is disenfranchised.”7 However, far from being disenfranchised, this design is strengthened by the incorporation of Wangarr signs and symbols, and its gravitas increased.

There are long traditions of Yolngu overlaying and blending their culture with the ideas, customs and social behaviour of other societies to achieve positive outcomes and maintain autonomy. Combining aspects of non-Aboriginal and Aboriginal cultures to form a coherent whole has meaning for Yolngu that is not just imposed on them from outside. For Yolngu, to lose tradition would be to lose the functional logic through which ancestral law is exercised and the human experience is sanctified.

The Garma Cultural Knowledge Centre is a powerful agent in preserving and conveying cultural knowledge, reinforcing the strength, and demonstrating the ingenuity of Yolngu cultures. Unravelling processes of cultural production behind the project’s architecture reveals significant complexities of Yolngu knowledge, power and identity, of land rights, politics and social systems, of religious beliefs and the forces of representation.

1. Yolngu (or Yolŋu) are an aggregation of Indigenous Australian people inhabiting north-eastern Arnhem Land in the Northern Territory of Australia. 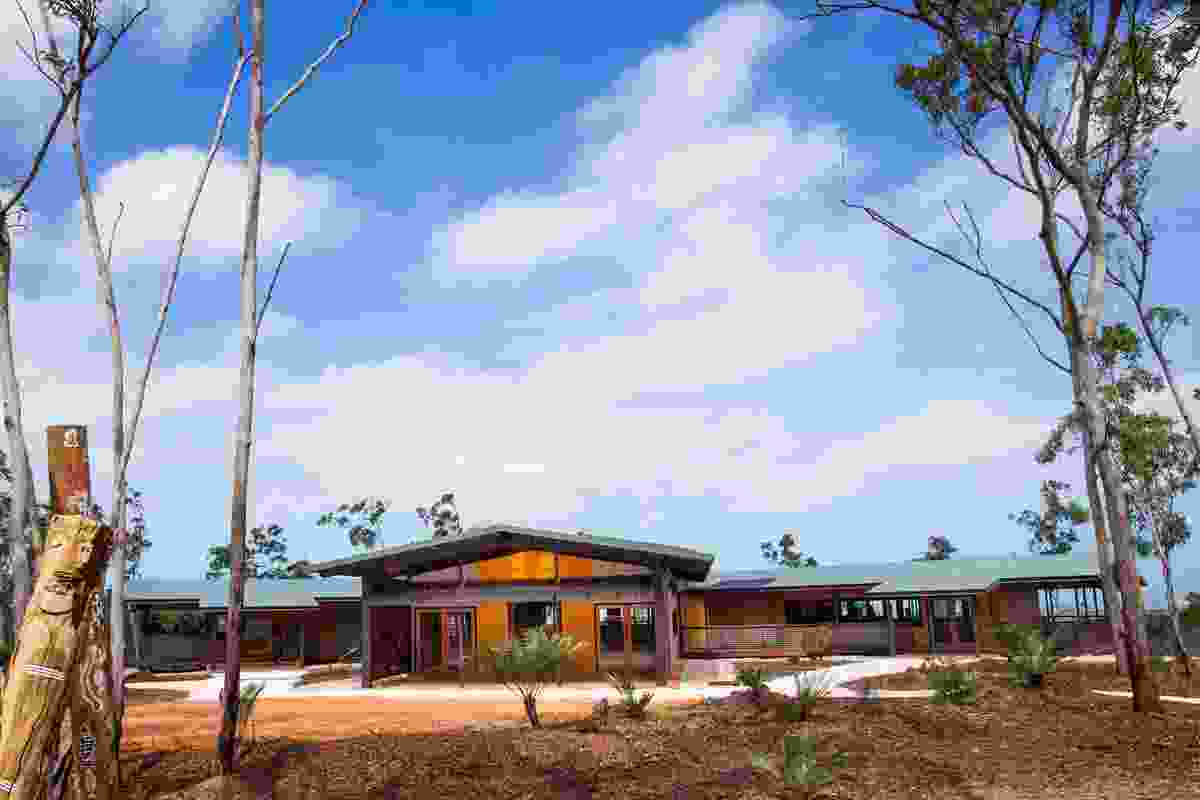 The Garma Cultural Knowledge Centre, located at Gulkula in Wiwatj (North East Arnhem Land). Architecture is used by the Indigenous clients as a medium to convey oral histories and tell their story. 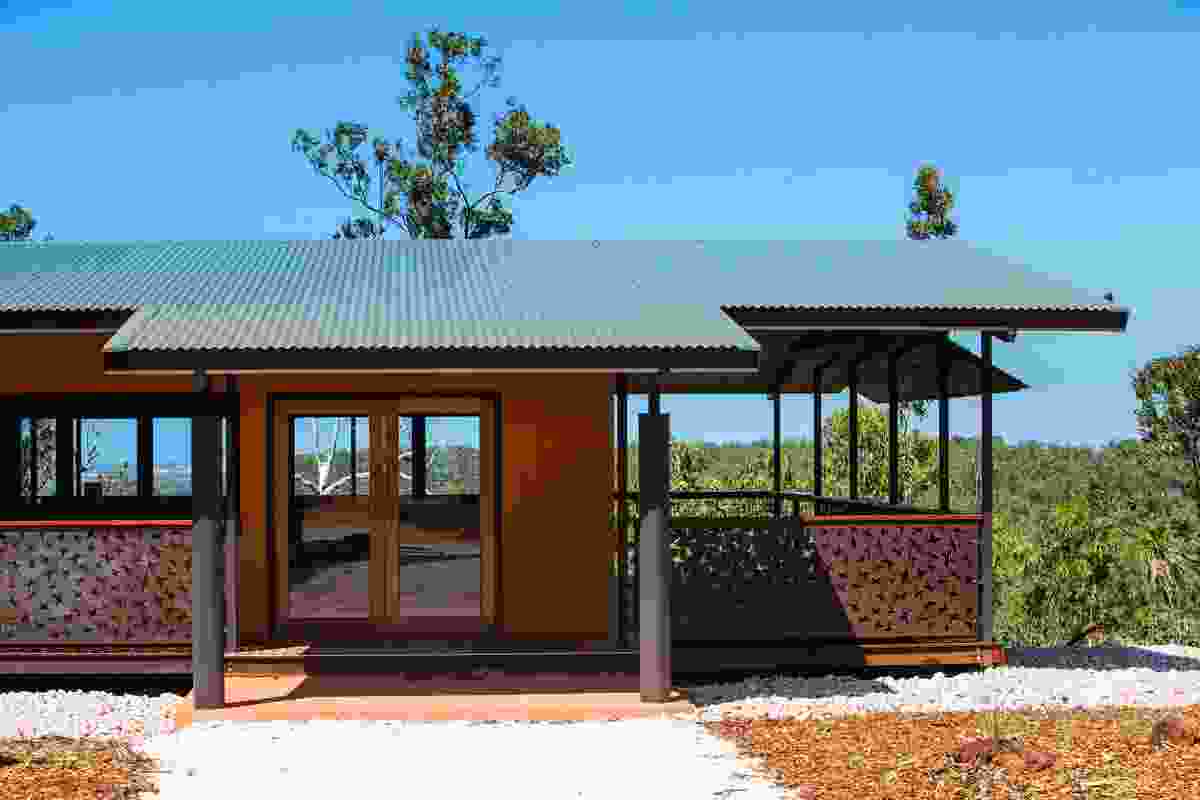 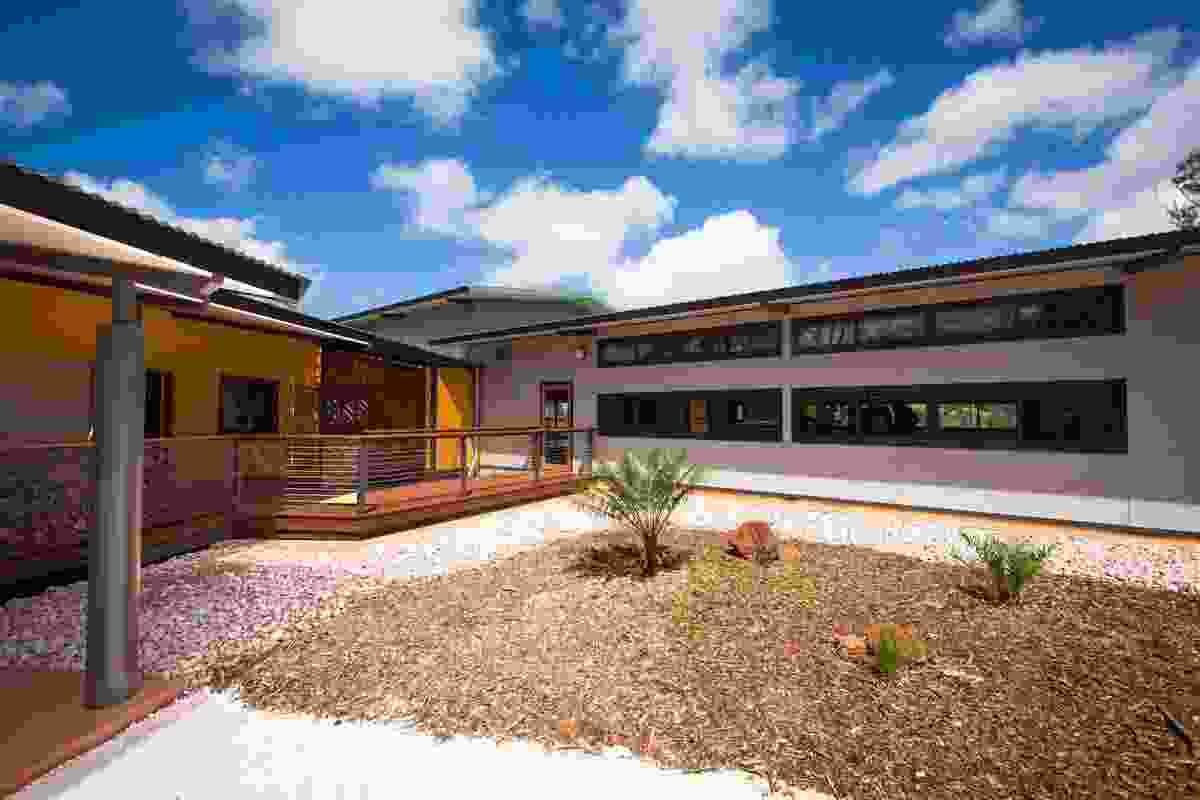 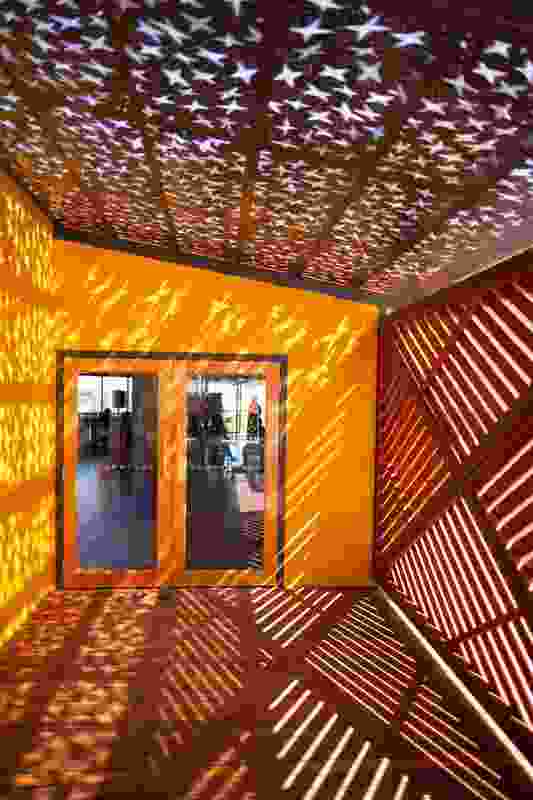 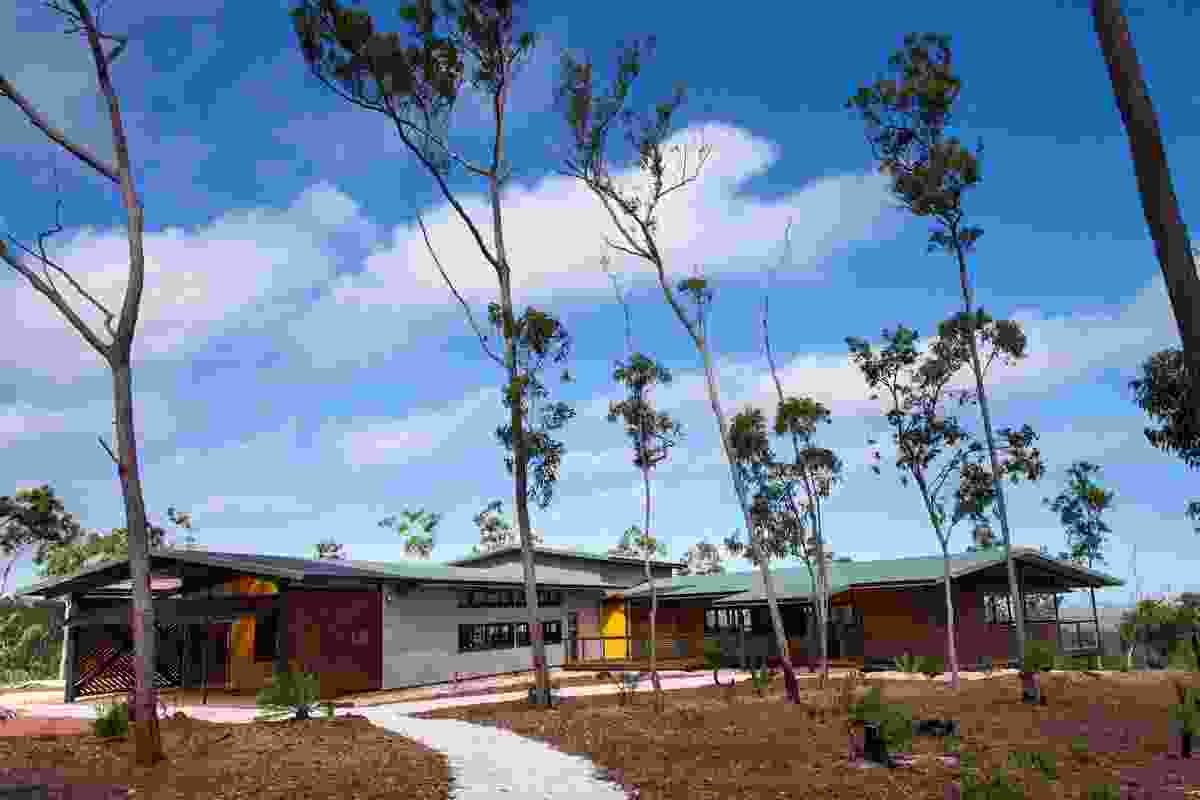 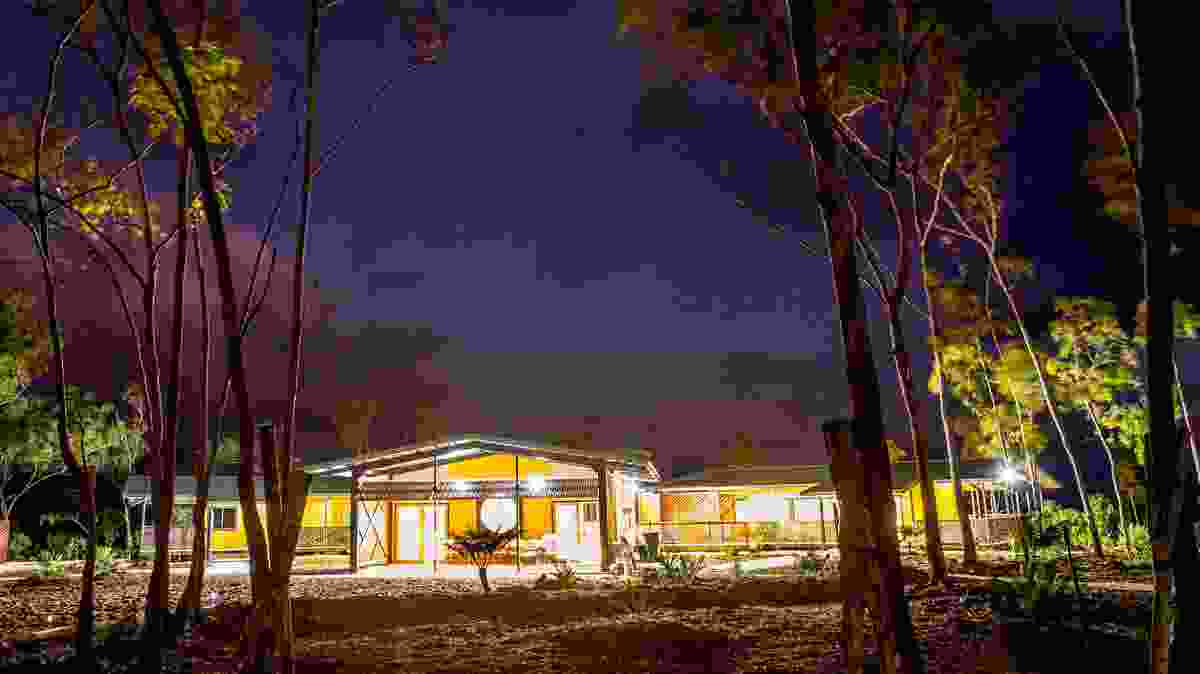 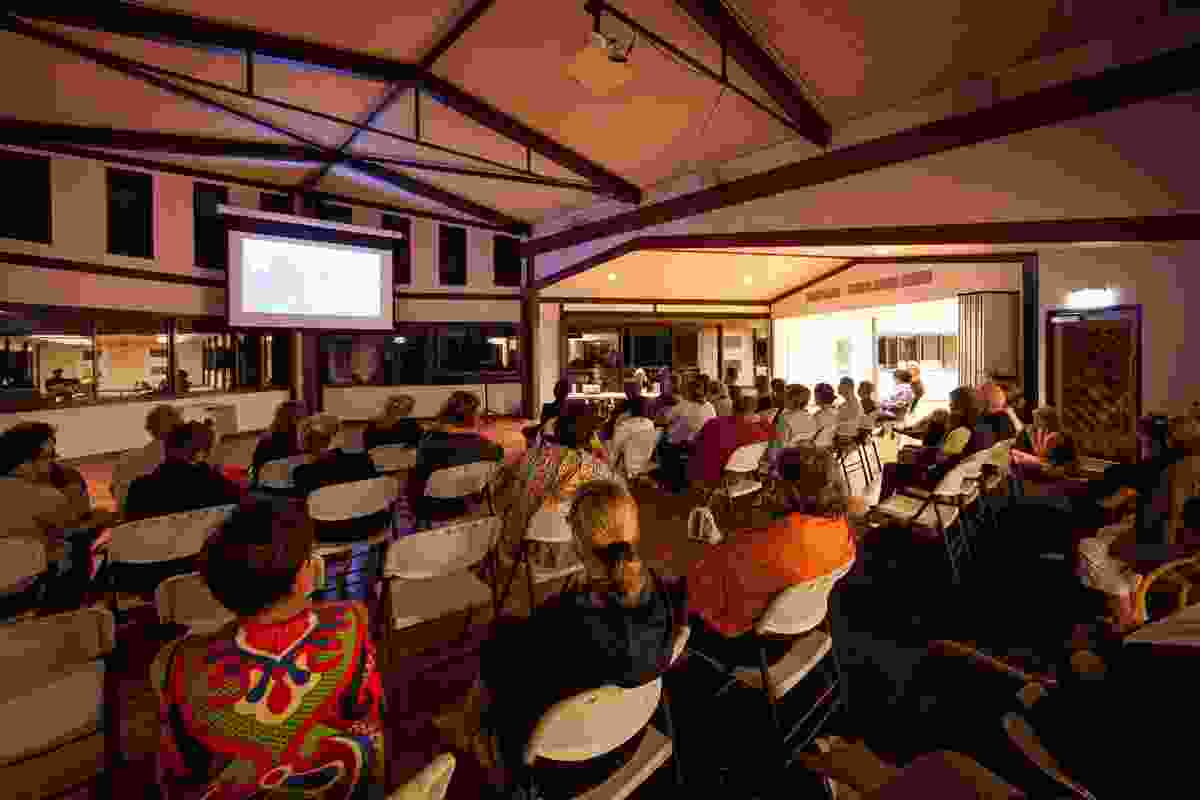