Teaming reductive simplicity in section with an irregular floor plan that responds to the bushland setting, this home is still an instructive source of delight thirty-five years after completion.

A flat-topped weatherboard wall sits between steel posts exposed at the corners, giving the house a crisp profile on approach.

The winding Brisbane River and undulating topography enjoyed by much of the city provide it with many locations possessing an idyllic charm. The Munro House finds its place on one such site, graced with significant tree coverage and descending to a gully that empties into the river. When construction was completed in 1980, it became home to its architect Ian “Darby” Munro, his wife and two children.

Domestic architecture in Brisbane seems to move periodically between embracing and rejecting the traditional Queenslander as a source of ideas for reinterpretation. When Munro was undertaking this project, the ascendancy was with those who were revisiting the Queenslander, thanks to intelligent projects being completed by the likes of Rex Addison, Gabriel Poole and Russell Hall. Munro House runs against the grain of the architect’s more well-known contemporaries. His design was focused on the same responsiveness to place that these other architects were pursuing, but used a more abstract set of tools drawn from influences that were less focused on the local tradition. The approach that Munro brought to the project was informed more by his earlier period working for RAIA Gold Medallist James Birrell and the modernist lineage of Le Corbusier and Oscar Niemeyer that many architects were tiring of. Projects like the Munro House that take an individualistic path in the context of an era as unfashionable as the early eighties always interest me as fascinating places to uncover something unexpected.

Munro’s approach to planning the house was grounded in responsiveness to the site – a skewed parcel of land with contours descending obliquely towards an ideal north-east orientation. It is not hard to imagine the house starting as a modernist object set out with systematic simplicity, which has then been pushed and pulled in acceptance of the topographic irregularities, by climate responsiveness and to set up good-mannered relationships with the neighbouring houses. What results is a peculiar beast that teams reductive simplicity in section with a floor plan of crystalline irregularity.

Approached from the street through terraced gardens, the house is revealed by the crisp profile of a flat-topped weatherboard wall cranking between black-painted steel posts exposed at the corners. While painted now, the brush box cladding was originally clear finished. The silhouette of a continuous datum simplifies the complexities that arise from the irregular-shaped footprint. The visual language of the exterior illustrates the project’s preference for abstraction over sentimentality.

Passing through a protected entry delivers occupants to a double-height circulation space that acts as an orientation hub. A winding staircase connects the communal spaces of this level to either the private family zone above or a studio workspace cut into the slope below. While the opposite northern side of the house has a bushland outlook that commands attention, the southern entry hall withholds the view. Instead occupants are given a counterpoint, an arrival and transition space that offers the most dramatic spatial experience within the house.

Munro’s design eschews the common tactic of eliminating as many internal partitions as possible. The alternative here creates intrigue through long but partial oblique glimpses to adjoining spaces. The architect’s spatial strategy is facilitated by enclosing the central dining space with a glass-topped partition, the use of solid upper-level balustrades and a stair that wraps around a walled core. As occupants circumnavigate the irregular plan configuration, new vantage points offer shifting visual connections between spaces.

The material palette reflects the ability of the architect to comfortably meld disparate elements into the design. Commercial construction systems establish a pragmatic basis for the house, indicative of Munro’s modernist sensibilities. This is contrasted with the extensive use of timber, which generates a feeling of warmth and reflects the house’s sense of belonging in the bushland setting. Upon arrival, occupants find Pirelli rubber flooring underfoot, whose grid of non-slip dots offers an unexpected graphic quality to the circulation spaces and wet areas. An immediate counterpoint exists on the ceiling, where rose maple timber boards dominate the internal materiality as well as being repeated on the soffits outside. Moving along the central dividing partition, occupants are drawn towards a classic early-eighties kitchen. Emerald green laminate and African ash timber create domestic warmth at the hub of family life.

The kitchen enjoys a prime outlook through the long northern wall, where the commercial glazing suite shifts the character of the material palette. Beyond the glass line occupants find themselves on an irregular-shaped deck billowing from the building, positioning them among the trees descending towards the river. The black-painted steel structure follows them outside, imparting an angled shape to the deck by Munro “connecting the dots” of the underlying structural grid. Inhabitants find their visual orientation redirected as the deck’s footprint shifts the building’s geometric order. When you look back at the northern facade, the house possesses a pared back, almost graphic quality, due to the rectangular planes of weatherboards protecting the interior from sun exposure.

The sequence of structural columns gains a companion in a spotted gum, predating the house, which passes through the deck. The act of recutting the hole as the tree has grown is emblematic of the accommodating interdependency of dwelling and site. Above the deck, the steel structure supports a triangular-shaped timber pergola. A climbing vine offers dappled shade and softens the angular geometry of the structure.

To live for decades in a house you have designed gives an architect time to evaluate their work. Reassuringly for Munro, this house has worked well as a home for his family. An effective ritual for living arose by spending daytime downstairs with a strong connection to the landscape, before retreating upstairs to a family lounge in the evening. Inhabitation has brought the architect moments of delight through what he described as a “slow kaleidoscope.” Changing qualities of light and shade animate the house throughout the day as northern sunlight, filtered through trees and edited by connecting glimpses, provides varied illumination across the different surface geometries.

Visitors have also found the house enjoyable to inhabit, although Munro says they often find it hard to pin down why they like it. I see this as a positive indication of the layering of thought embodied in the design. The Munro House presents a confident air of simplicity and pragmatism, easily handling the challenges and opportunities of an irregular bushland site. The design skilfully balances contrasts and integrates irregularities without feeling overworked. These attributes heighten the drama, joy and variety that unfold for occupants enacting the rituals of domestic life. Brisbane circa 1980 might not come to mind as the first place to go in search of timeless residential architecture, but thirty-five years later, the Munro House is still an instructive source of delight for those who encounter it.

Ian ’Darby’ Munro graduated in architecture from the Queensland Institute of Technology, Brisbane in 1968. He travelled overseas and worked in London before returning to Australia, where he worked with James Birrell until 1972. He then started his own architecture practice. A few years later, Munro was joined by Colin Denham and the practice became Denham and Munro Architects. During this time works were carried out in the residential, recreational, educational, health and commercial fields. The practice reverted to Munro Architects in the 1990s and still operates today as Marc and Co, under the guidance of Munro’s son Angus. 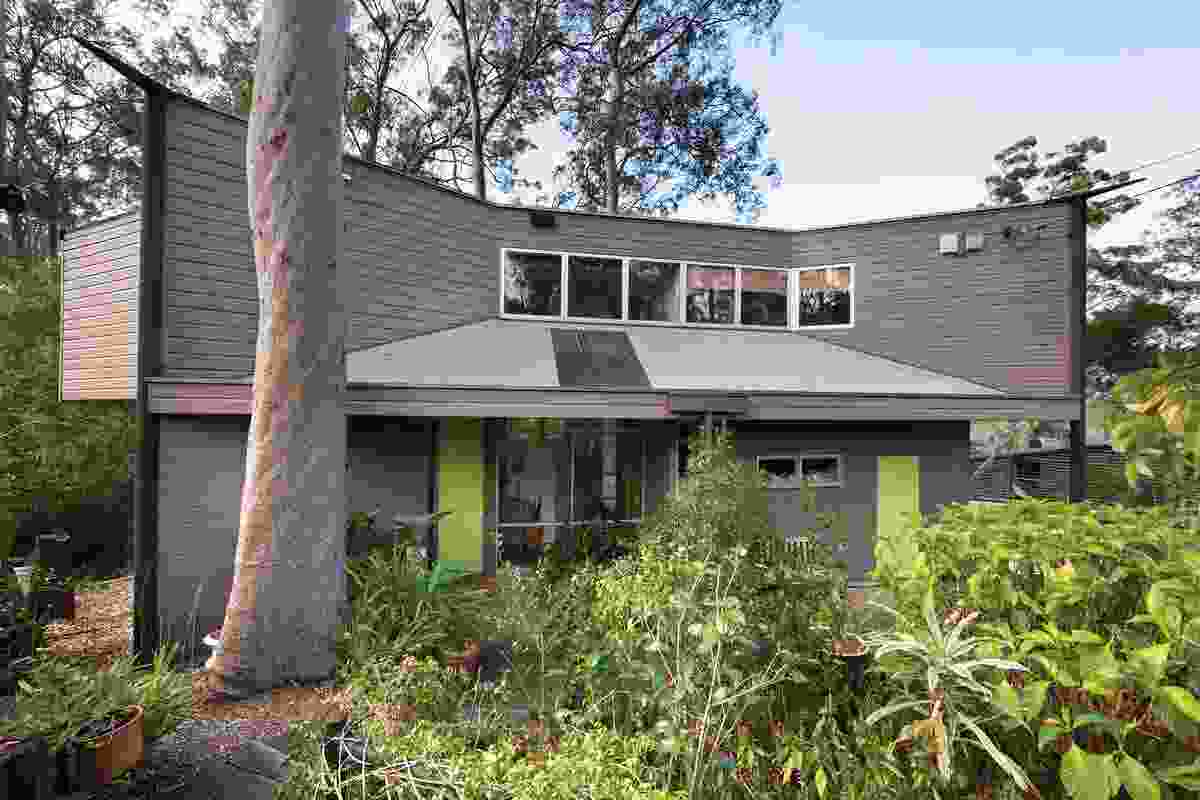 A flat-topped weatherboard wall sits between steel posts exposed at the corners, giving the house a crisp profile on approach. 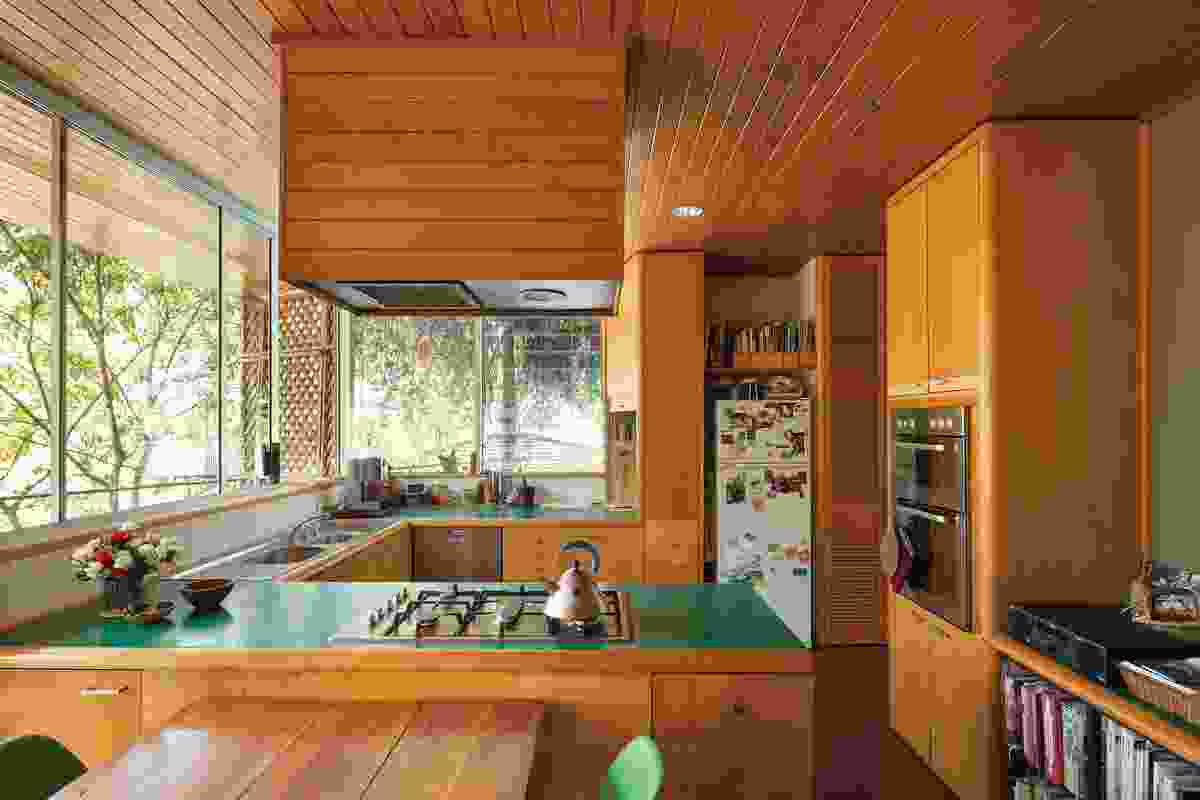 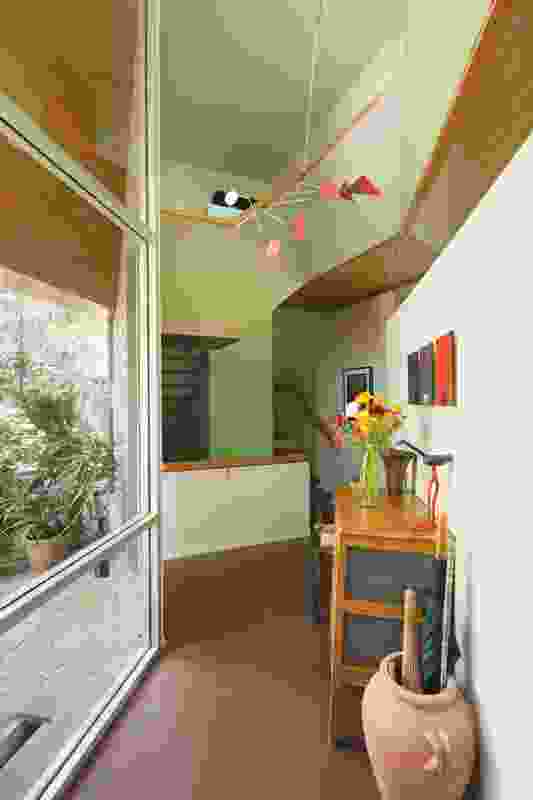 A double-height circulation space at the entry acts as an orientation hub. 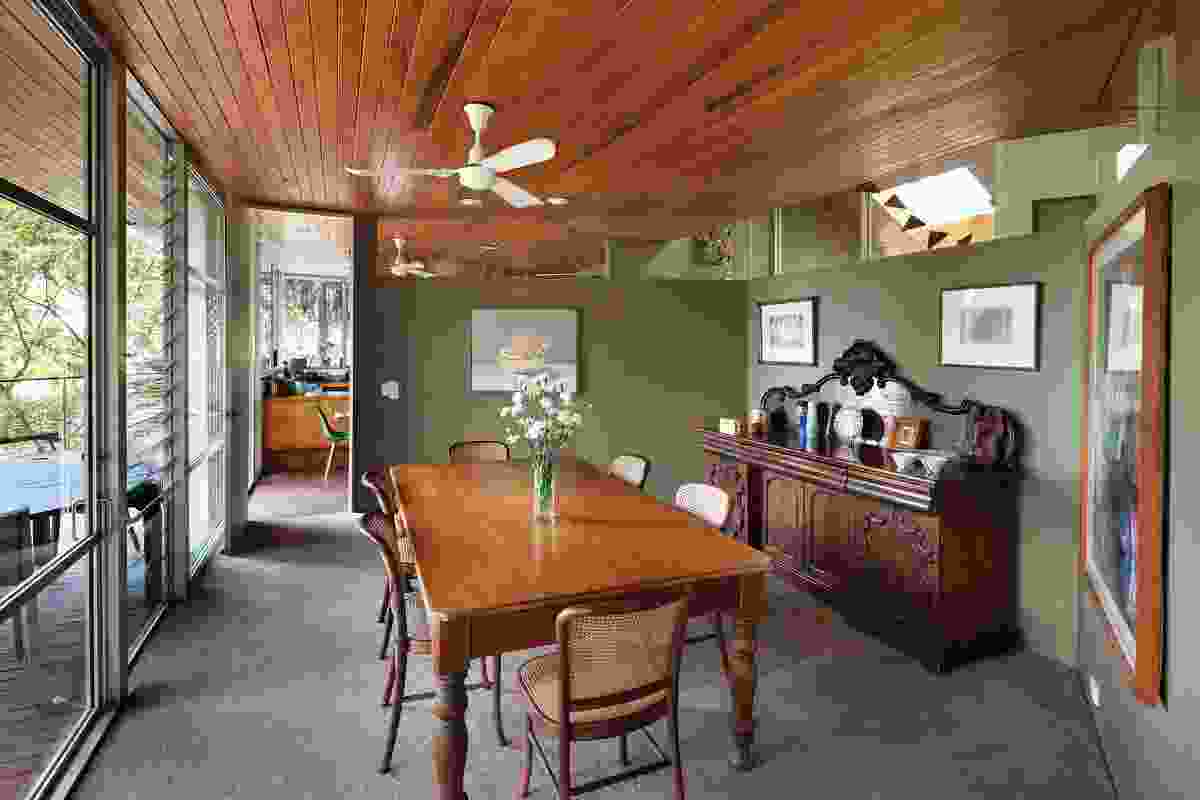 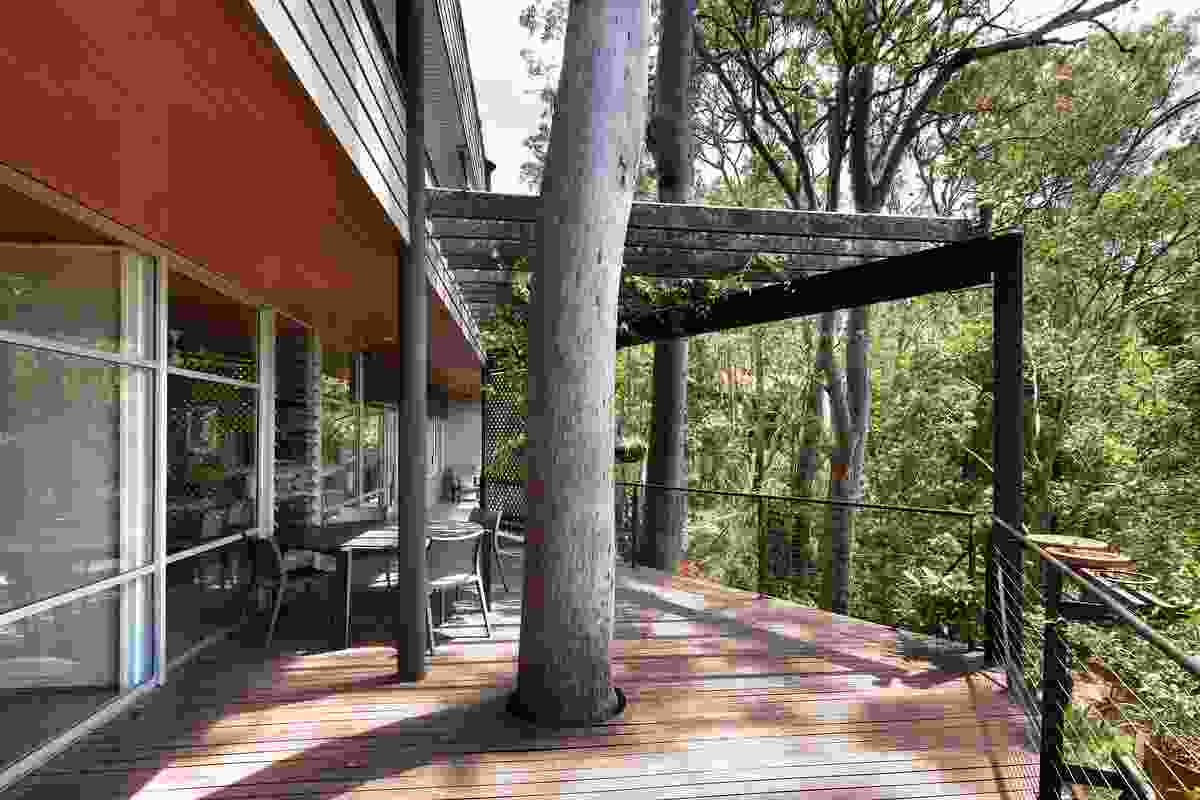 An irregular-shaped deck billowing from the building positions occupants among the trees. 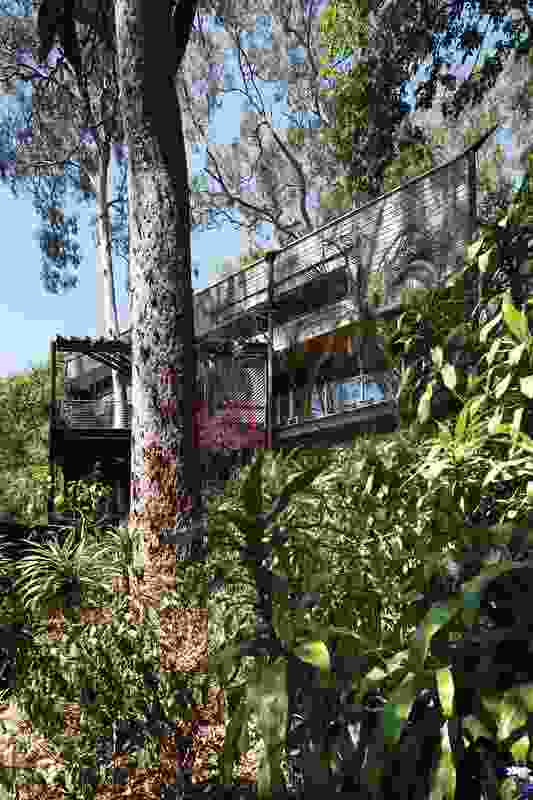 The house presents an air of simplicity and pragmatism, easily handling the challenges and opportunities of an irregular bushland site. 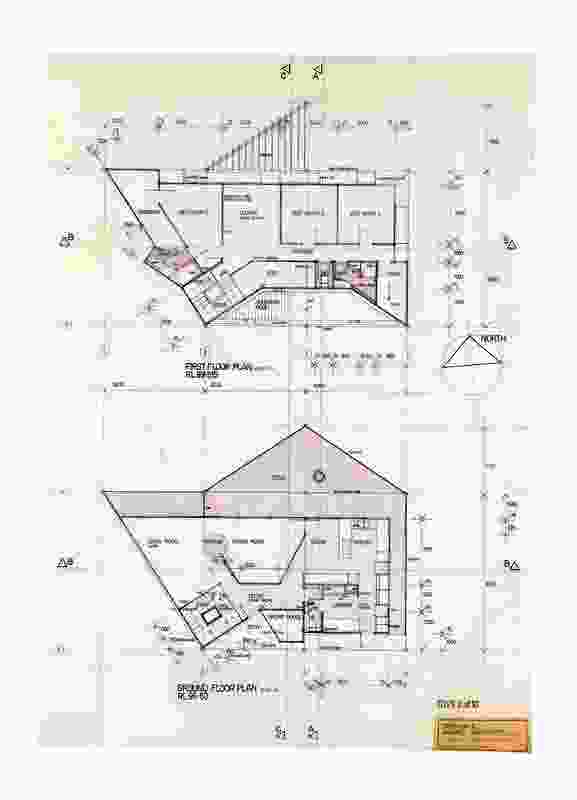 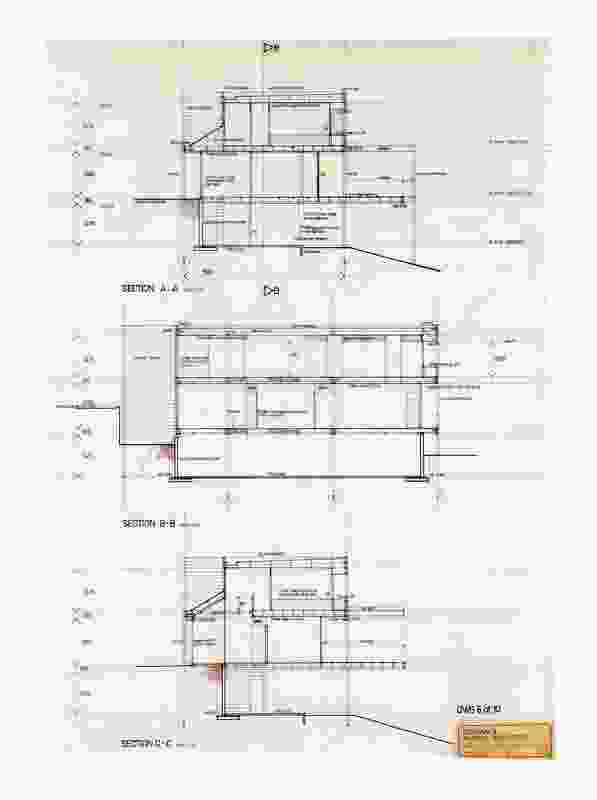