A 2013 photograph of Melbourne. The interim planning laws place restrictions on the height and floor space ratio of new developments.

The Victorian state government introduced interim planning laws for Melbourne’s CBD late last week that have drawn the ire of developers, with the Victorian branch of the Urban Development Institute of Australia (UDIA) saying they will undermine investor confidence and lead to a drop in the market.

A review into the city’s planning laws that will see permanent changes introduced next year was put forward in conjunction with the interim measures, which limit high rise developments through plot ratio controls and height limits.

The UDIA described the changes as “swift, uncanvassed action” and said they put both housing supply and jobs in “grave danger.”

A Swinburne University housing researcher, however, has said that while the changes would lead to “some pain” for developers, the certainty introduced by the new restrictions would have positive outcomes for housing affordability in Melbourne.

“There will be a dip as existing developers who have sites that are undeveloped without a permit – they will feel some pain from this, and they might choose to put the property back onto the market and the next buyer will get it a bit cheaper,” said Dr Andrea Sharam.

“The uncertainty was working in their favour, but that was a risk, so the developers who buy from now on won’t be looking for the same kinds of yields because they won’t have to pay the price that they were paying,” she said.

Sharam authored a recent report called Making Apartments Affordable: Moving From Speculative to Deliberative Development that looked in depth at issues in Melbourne’s housing market. The report suggested that a high level of speculation and uncertainty for developers in the CBD has been pushing up land prices and inflating the city’s apartment market.

Under the new interim measures introduced in Melbourne, the floor space ratio of new buildings will be restricted to 24 to 1, new height limits have been imposed and more space between buildings will be required. A number of buildings that have been approved in recent years would not conform with the new regulations.

The announcement by planning minister Richard Wynne signalled that the focus of the changes is on maintaining Melbourne’s liveability and character, and protecting the city’s amenity by preventing the loss of open space, wind tunnels and darkened streets.

“There hasn’t been a significant update of the central city planning rules since 1999, and it is our duty and obligation to bring plans in line with our evolving CBD,” Wynne said.

“Melbourne’s planning scheme needs to balance scale and density occuring in our city, protecting our heritage and character while preparing the city for more growth.”

The state government has signalled its intention to work closely with the City of Melbourne on the review, with a Memorandum of Understanding between the two authorities signed and the city council now being made the referral authority for planning permits before they reach the state government.

Proposed changes will be available for consulation in 2016. Updates to the Melbourne Planning Scheme that will replace the interim laws are expected in the second half of 2016.

The planning minister has also reaffirmed the state government’s committment to updating Plan Melbourne, a vision for the city in 2050 that was released under the previous Victorian government in 2014. 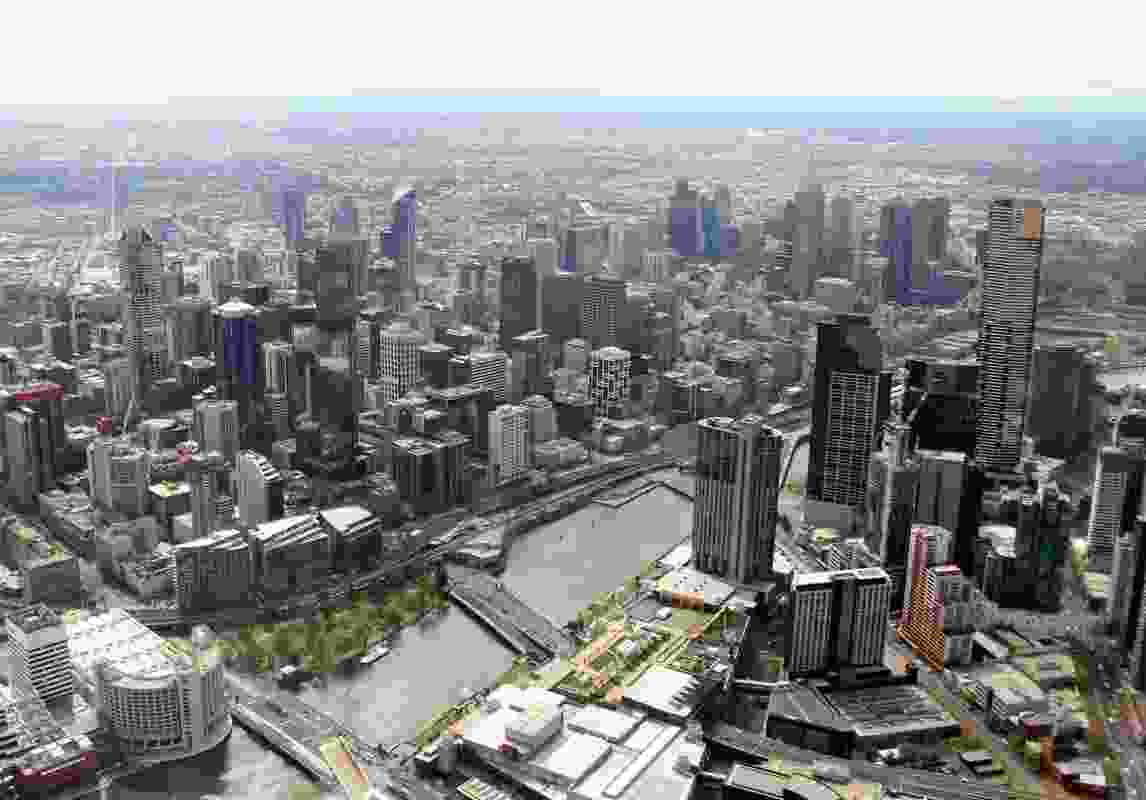 A 2013 photograph of Melbourne. The interim planning laws place restrictions on the height and floor space ratio of new developments.