Grace Mortlock and David Neustein assess the risks and rewards of the 2015 Australian Institute of Architects' National Conference.

David Gianotten of OMA presenting at the Australian Institute of Architects’ 2015 National Conference.

For two magical days every year, 1500 architects congregate in a corporate convention centre to listen to inspirational speakers from around the world/earn CPD points. The Australian Institute of Architects national conference is the main event of our architectural calendar, but in recent years the format has become a bit stale. So it was welcome news when the theme of “Risk” was announced for this year’s conference. A trio of safe hands was appointed at the helm: Donald Bates, Hamish Lyon and Andrew Mackenzie.

Reverting to the schedule employed by the “Parallax” conference of 2009, the directors have bravely chosen to divide the program into concurrent sessions, with a focus on conversation and interaction between speakers. But will this daring approach translate into the sessions themselves? We decided to investigate just how risky this conference could be. We have also chosen the riskiest format for reporting, unmediated daily coverage direct from the battlefront. Please forgive us for what you are about to read: Risk Report, day one.

The conference’s first speaker begins his talk with a cunning humble-brag. Fast Company has rated SHoP Architects as the most innovative architecture firm in the world, we are told, but “that and five bucks gets you a cup of coffee at Starbucks.” Gregg Pasquarelli, or Pasq as we affectionately like to call him, has a well-honed sales pitch. He rattles off a series of innovative projects at the limits of architectural practice. These include: a solar powered glass curtain wall; a software platform that allows for rapid cross referencing of building envelopes, planning codes and economic feasibility; and an app that allows contractors to track the live status of building components.

SHoP’s plan is clearly nothing less than world domination. Eleven towers taller than the Empire State Building are planned for New York, and they are building four of them. Melbourne is one of many green dots on their global conquest map, with a tower planned for 447 Collins Street. Pasq’s key strategy is to “double down,” buying into risk alongside his clients. His first major project was a joint venture with a client, and he flew to Belgium to purchase its zinc cladding himself. He had 72 hours to convince Bruce Ratner to award him the Barclay’s Center Stadium job, then just seven weeks to design the entire building. Pasq can rightly take credit for delivering the stadium (home of the Brooklyn Nets) on an impossible timeline, but perhaps he is stretching the truth when he claims to have masterminded the team’s change of uniform and single handedly boosted their revenue. Might a billion-dollar plus investment from a Russian oligarch, the team’s move from New Jersey, and Jay Z’s endorsement have had something to do with that? Finishing his steroidal talk with the phallic motif of “the world’s most slender tower” Pasq shifts gears from architect to presidential candidate. “I believe in architecture, I believe in design,” he bellows! We are left stirred but unconvinced. On one hand, SHoP’s practice is a paragon of disciplinary innovation, on the other all their products share the same wrapping paper.

Prior to the conference, we predicted Caroline Bos to be boss of all speakers. Appearing on stage without introduction, she launches immediately into a dry analysis on a newly completed university building in Singapore. Suddenly the greatest risk seems to be a mass inducement of sleep in the audience. We are shown fleeting glimpses of UN Studio’s extraordinary earlier projects, and made to yearn for them as the talk progresses.

Sadly, Bos’s delivery has all the verve and charisma of a first year structural physics lecture. She backs up her worrying claim that “a university is not so different from other infrastructure spaces of today, like an airport,” by showing university interiors indistinguishable from those of airports or shopping malls. Inevitably, UN Studio’s Singapore campus is based on circulation, an architecture of chamfered corners, corridors and spiral staircases. “Here we see how these informal spaces are occupied by students,” says Bos. Cue images of students sitting awkwardly on bare concrete slabs. In a similar vein, the “verdant quality of Singapore” manifests in green-coloured cladding applied to the building’s facades. Despite her assertions, it is never clear what is precisely so risky about being a starchitect hired to design an overseas university complex.

While their projects differ, both Suzannah Waldron and John Choi have attempted to squeeze the maximum level of refinement out of their respective circumstances, pushing clients and contractors to the limits. For both architects, normative outcomes are to be avoided at all costs. In this sense, risks are presented as obstacles to the sheer will of the designer. However, dialogue chair Deborah Saunt offers another reading of architectural adventure; suggesting that fixation on form is in fact a positive attribute, as craft industries will die out in the absence of elaborate details.

While the morning’s talks had focussed on urban challenges of procurement and delivery, Finn Pedersen and Kristen Green have ventured far beyond the pail. Their projects engage the elevated stakes of different cultures and extreme environments, with realisation constantly in doubt. In Pasq’s all-too-brief closing discussion, it emerges that both projects are not occupied as intended. Pedersen’s aged care facility has never been sufficiently funded, while Green’s resort is yet to be inhabited. In this session, risk is more than a misplaced cladding panel.

First, a word on the sponsor: this session is represented by the conference’s “insurance partner,” Planned Cover, which offers a timely reminder that insurers translate perceived risk into profit. This discussion revolves around the traditional attributes of the architect, and whether architects should be seeking to recapture lost skills or expand into new areas. While Kasper Jensen believes that architects should become experts in biology, psychology and virtually every other professional domain, Caroline Bos admits: “I don’t read contracts, I just don’t want to know.”

Posed with the question, how do you work out what the client wants, David Gianotten responds: “you read the brief and then you put it on the site.” This session brought delegates from the Planning Institute of Australia conference together with the architectural rabble to discuss shared territory. The unexpected star of this panel is Mitchell Silver, Parks Commissioner for the City of New York, who is able to expand the conversation beyond generalisations and a focus on built artefacts, drawing attention to the effect of generational change and infrastructural renewal on the city’s form.

“While we were talking about beauty, people were finding our architecture awkward, unsettling, even ugly,” says Saunt. An engaging speaker, Saunt claims to have invented new typologies, and to be discovering contemporary aesthetics, but her work is hardly ground-breaking. The most meaningful element of her talk concerns the struggle of a small but tenacious office to keep hold of public projects, with large commercial firms “circling like vultures.”

Day one was symmetrically book-ended by the convincing sales pitches of charismatic self-mythologisers. David Gianotten wishes you to know that he began his career as a professional soccer player for minor Dutch team Vitesse Arnhem. In the mug shots of OMA’s directors that he presents, we find him always placed next to Rem. “I am happy to stand in front of you as a star,” says Gianotten, who has the same gift for simplified historical narrative as OMA’s famous founder.

Accompanied by a fabulous array of graphs, Gianotten takes us on a dizzying ride through OMA’s highs and lows. His ironic claim is that, as architects earn the least profit from buildings of all involved, they are uncorrupted by the lure of cash and can therefore focus on pursuing a social agenda. Subject to fluctuations in the stock market and faced with a shocking project completion rate, OMA is now planning a move into development and construction. Will this result in OMA “never emulating our own work,” as Gianotten claims, or has OMA been successfully self-emulating for years? You be the judge.

In all, Risk’s first day was a thoroughly entertaining beginning to the conference. While the work wasn’t always convincing, its delivery was engaging and the conversation format excellent. We look forward to an expanded conversation in day two, with speakers taking us beyond the safe domain of the developed world and daring to explore aspects of risk outside procurement and delivery.

Read Grace Mortlock and David Neustein’s report from day two of the conference. 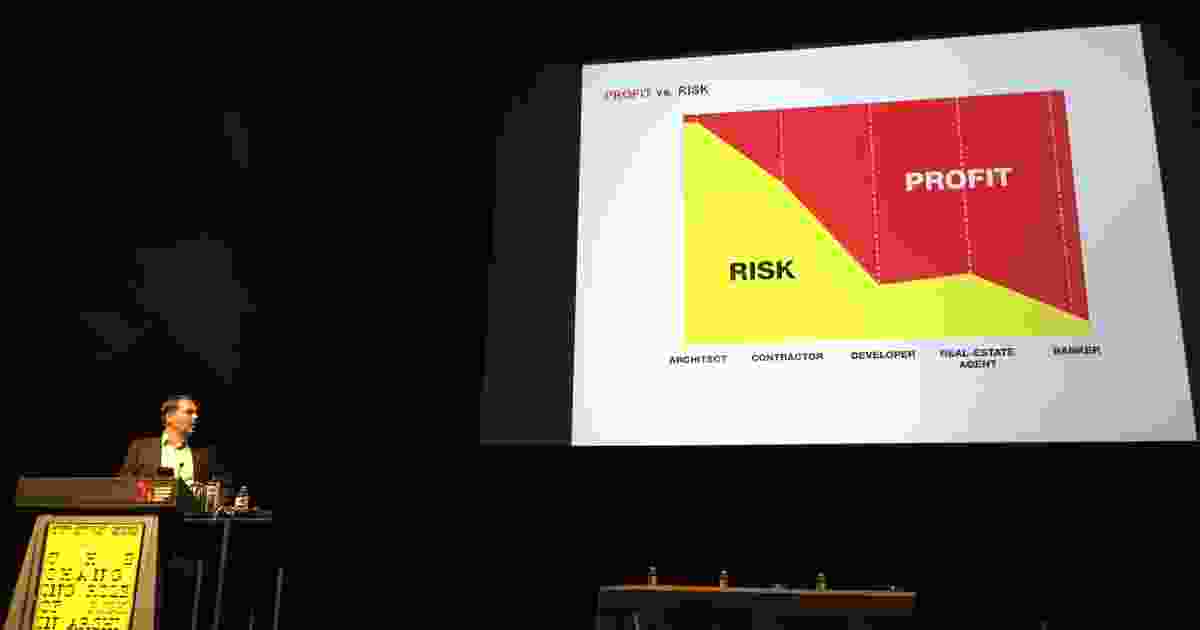 David Gianotten of OMA presenting at the Australian Institute of Architects’ 2015 National Conference.