This beachside home by Stuart Tanner Architects is precise without being overly fussy, facilitating a relaxed lifestyle with a measured sense of order and grandeur.

The planning and spatial sequence are precisely ordered to optimize space, belying the modest size of the house.

Along the coastline of Tasmania and the shores of inland lakes, informal shack settlements have formed a lineage of democratized space that is part of the local housing vernacular. This contrasts with the formality of the suburb, which is increasingly characterized by more demarcated and territorial models of housing and settlement. The question of how the relaxed informality of shack settlements can be translated to different conditions of ownership and privacy is a recurring theme of local architectural practice and central to Stuart Tanner Architects’ River’s Edge House.

After several years living and working on the Australian mainland and in Europe and the Middle East, the clients returned home to Tasmania. They recognized that Taroona, a beachside suburb ten kilometres from Hobart’s CBD, was an ideal location to provide their three young children with a “down-to-earth childhood” similar to their own. However, the existing small, single-level, postwar stucco house they had purchased required substantial reworking to adapt it to their requirements, and its location in the centre of the block created restrictions for expansion. Both the clients and the architect recognized that demolishing the existing house would allow the two-metre fall from the street boundary to the cliff edge to be exploited, enabling a new, larger house to fit within the restrictions of a five metre height limit and maximum 30 percent site cover.

The diagrammatic simplicity of the house disguises a complex orchestrated sequence, with a split-level arrangement providing efficient pinwheel circulation at the core. Moving through the house involves a series of level changes, and along the way the view across the site is revealed in diverse ways through the careful alignment of windows. From the street edge and down into the front garden, visitors enter at the mid level of the house, where the first hint of the expansive view of the River Derwent is revealed. The family enters via the adjacent carport, through a mudroom that allows for shoes, coats and schoolbags to be stowed out of sight of the front hall. Three children’s bedrooms are clustered together on the entry level, at the front of the house, each modest in size but subtly different in character and outlook. An adjacent playroom doubles as a guestroom for the grandparents. The main bedroom is up half a level, above the living spaces and service rooms, which open out into a series of garden spaces below.

The planning and spatial sequence are precisely ordered to optimize space, belying the modest size of the house. Every part of the site is assigned a use. To the north, an outdoor room is framed by a concrete block fireplace and a pergola overhead; to the east, a patio provides a sitting place overlooking the expansive view, with timber steps creating seating and an edge to the garden. Nestled in between the east and west wings is a garden playspace that is protected from the wind, while the long easement to the south offers space for clotheslines, wood storage and a garden shed.

Within the house, three distinct zones are created in the L-shaped living space: the kitchen is tucked into the corner but directly aligned with the dining room, which is separated from the sitting room by a central fireplace. A wide steel hearth forms a plinth that wraps around the chimney, creating a seat to the kitchen that is reminiscent of the family’s holiday shack. Family and friends perched along this ledge, with their backs to the chimney, become part of the life of the kitchen during meal preparation. Similarly, the steel benchtop spans beyond the cabinet below, creating an open edge that transforms the bench into a high table.

The base building of rough off-form concrete is contrasted with fine Tasmanian oak joinery. The texture of the concrete was enhanced by using structural ply, rather than plastic-faced formply, so the wet concrete degraded and stripped the timber surface, leaving a grainy imprint. Attention to the detail of the joinery, with shadow gaps between timber and concrete, and open shelves on bookcases at the end of corridors, transforms the material contrast into a spatial one. The ceiling of C-grade Tasmanian oak floorboards complements the roughness of the concrete, and their longitudinal arrangement emphasizes movement out toward the view.

River’s Edge House is precise without being overly fussy. It has the informality of a beach shack, but with a measured sense of order and grandeur. Material choices relate directly to spatial ideas. The rough off-form concrete and the grainy timber add to the impression of robustness and warmth. Subspaces are carefully delineated by a change in surface material, creating perceptual thresholds where no formal boundaries exist. Externally the concrete-block shell is an unadorned, boxy form that is a direct response to the interior space. Nestled below the street, the house is masked by a wide paling fence and an open carport, creating a low-scale and relatively mute edge to the street. The massing of the building allows views through the block and to the River Derwent beyond. The house is both functional and delightful, private yet open, with visual connections and paths around the building that match the patterns of more informal settlements to the conditions of the suburb. 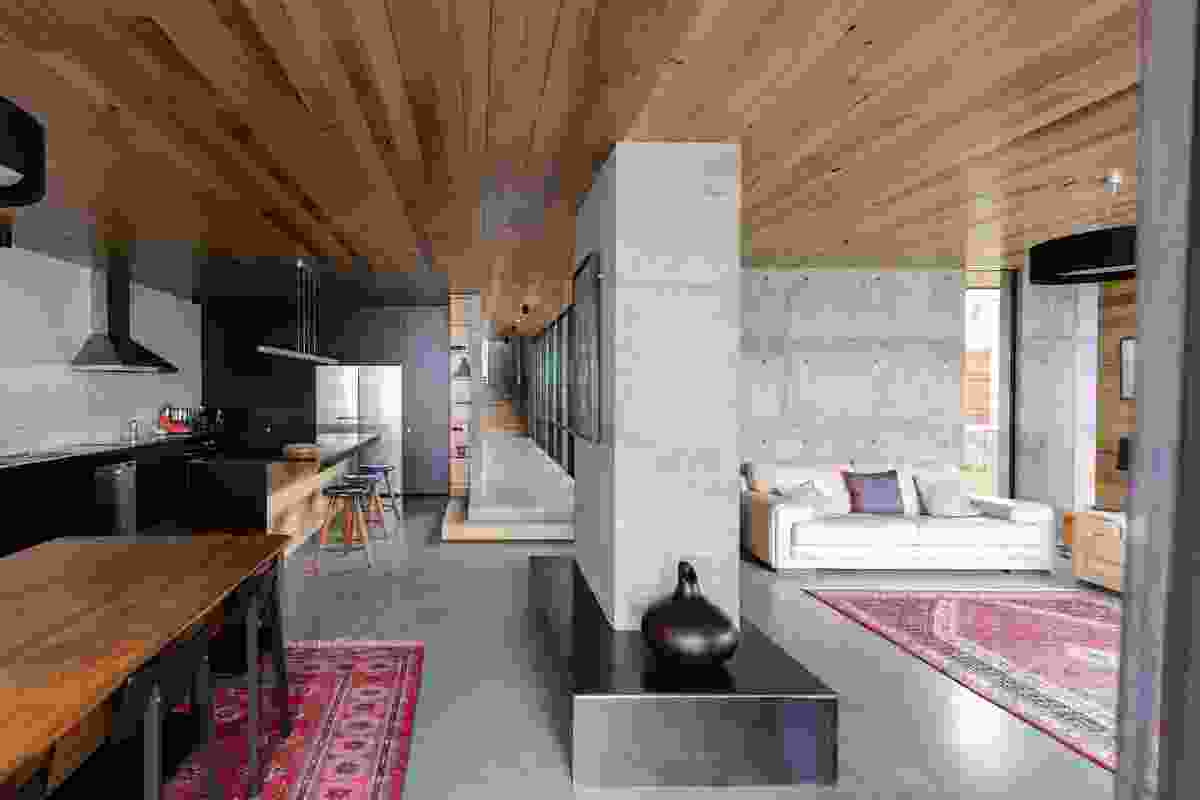 The planning and spatial sequence are precisely ordered to optimize space, belying the modest size of the house. 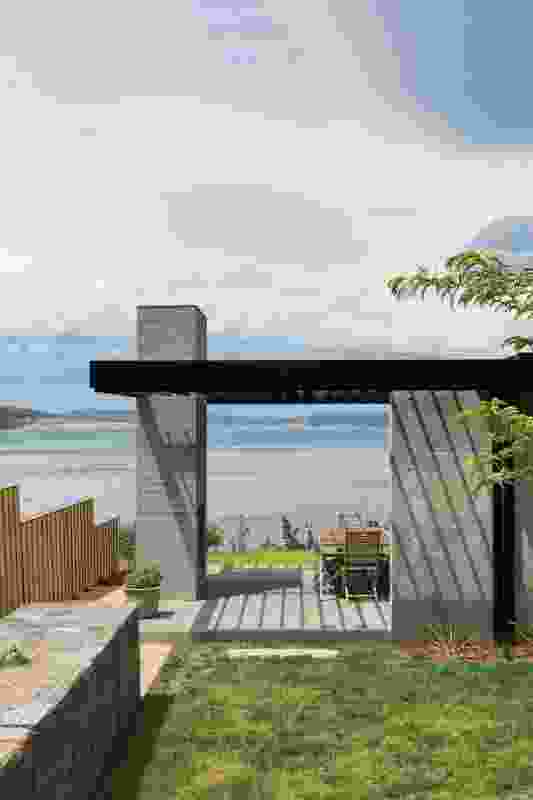 To the north, an outdoor room is framed by a concrete block fireplace and a pergola overhead. 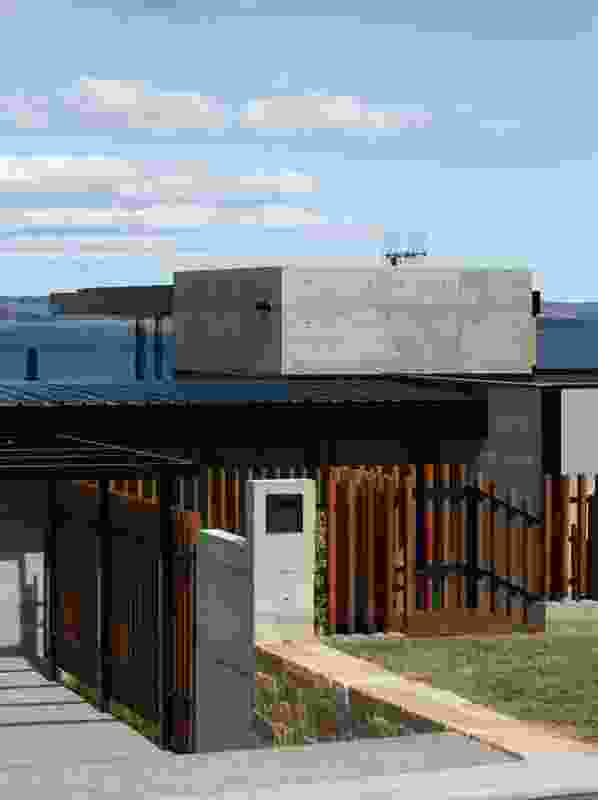 Visitors enter at the mid level of the house, the arrival sequence offering a spectacular glimpse of the River Derwent. 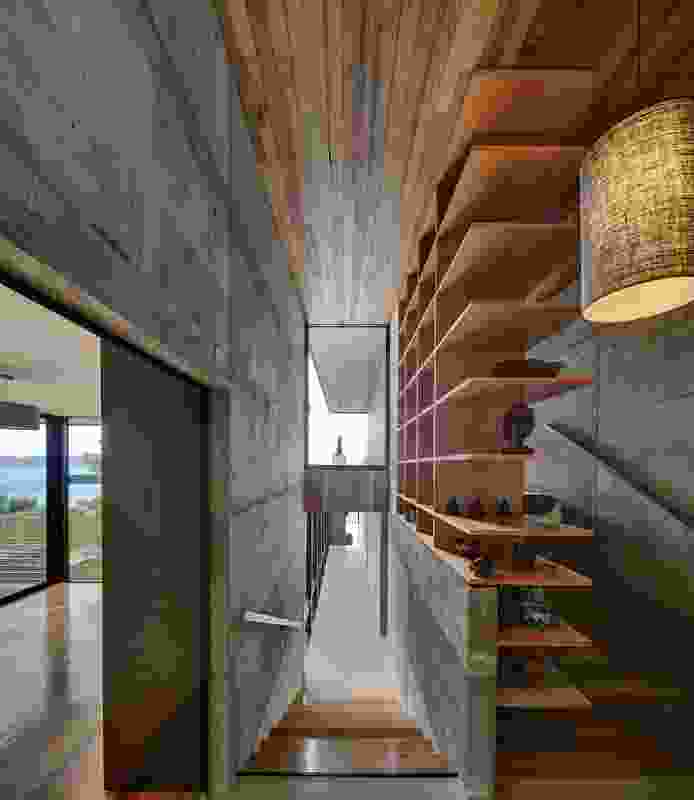 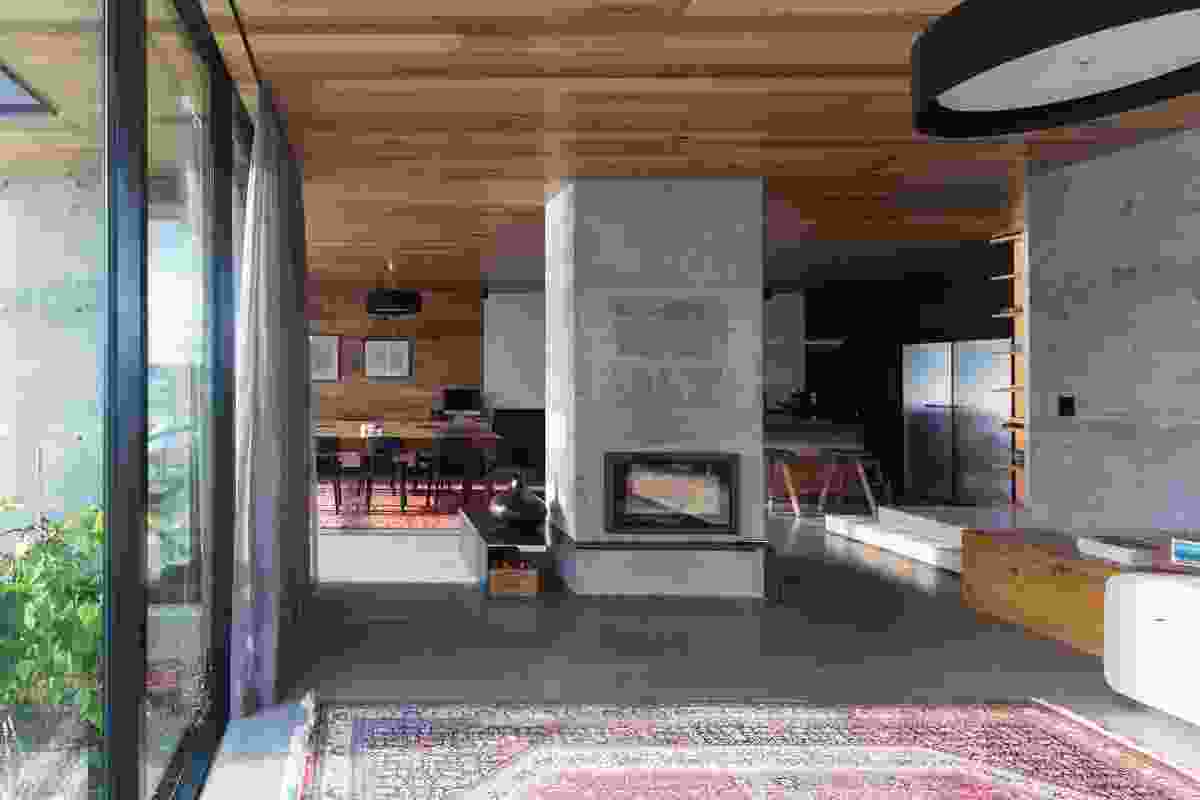 The L-shaped living space consists of three zones – kitchen, dining and sitting – with a central fireplace. 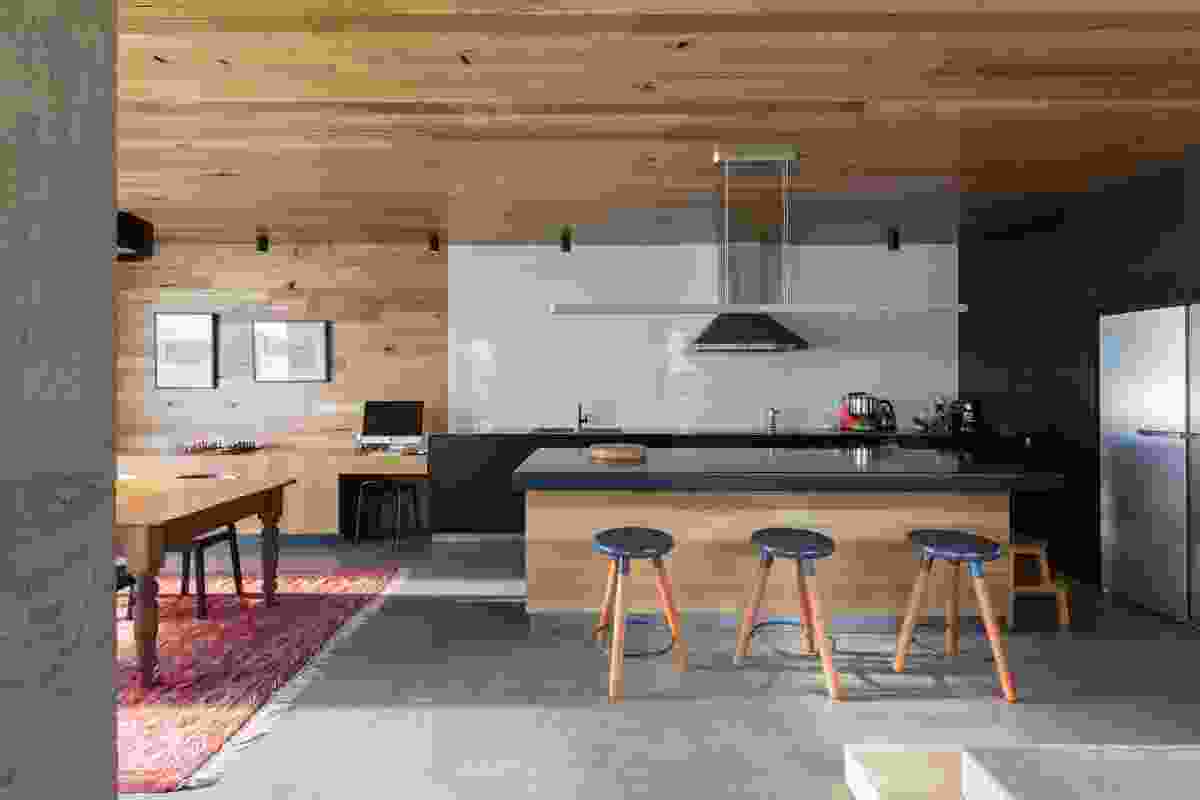 Spaces and joinery elements are designed to facilitate family interaction and a relaxed atmosphere.

A patio overlooks the expansive view, with timber steps creating seating and an edge to the garden. 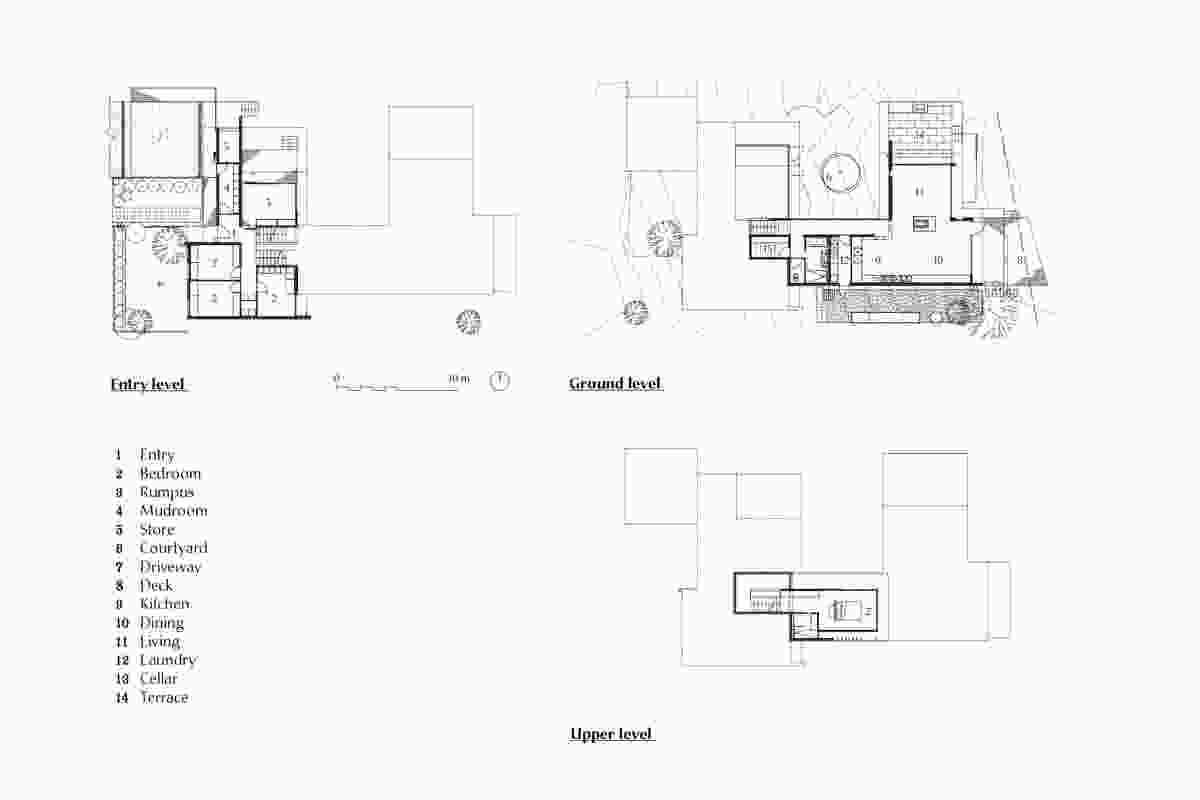