Allan Powell Architects met RMIT’s brief for an iconic building by delivering a quietly intriguing structure that looks as though it has just landed.

An “interstellar craft come to rest among the campus buildings”?

Walking the perimeter of the new building by Allan Powell Architects at the RMIT Bundoora West campus in the northern suburbs of Melbourne, it strikes you that there are quite a few things this building might be. A more active imagination might see an interstellar craft come to rest among the campus buildings. Allan Powell himself suggests you might see a “stylized Uluru” complete with the rivulets formed by water over many millennia. Theatre students might see “paraskenia,” the permanent stone backdrops of ancient Greek and Roman theatres, in the tiered landscape encircling the tall external walls. Those who have had the pleasure of visiting Powell’s TarraWarra Museum of Art will see further evidence of his ongoing investigations into siting, layering and the ability to create engaging spatial complexities with efficient statements in form.

The building is in fact a new lecture theatre for 360 students, located at the eastern edge of the campus. It is also a response to the university’s request for an “iconic” form, a welcoming gesture to students and visitors and a beacon to catch the attention of commuters along Melbourne’s rapidly expanding northern corridor. Key to the project, and an initial point of contention, was the siting of the building. The campus masterplan had located the theatre along an access road, neatly extending a string of curved, extruded blocks that left open an existing pedestrian corridor into the campus. Instead, the proposal set the building adrift, nudging it off its predetermined and somewhat predictable axis and allowing it to settle across what was an existing pathway. It is a high-level, if not a little bumptious gesture, which immediately creates a disjunction within its setting as well as forcing students to now navigate its perimeter, something that is key to establishing the overarching concept of the subtle, mysterious object that doesn’t quite gel.

Early concept sketches of the building depict it as a soft, weightless mass against a sharply geometric context, a cloud-like form settling to earth. It is described by Powell and co-design architect Ed Glenn as an attempt to create an “enigmatic form, akin to a mountain range whose exact shape you can never fully appreciate, whose shape is always changing as you move around it.” The finished product retains this nebulousness, but is more mountain range than cloud, due largely to the enormous charcoal precast concrete panels. There is a through line here to the ancient ziggurats, pyramids and Hindu temples, which emulated natural land formations to generate notions of the mysterious and engender sublime readings of their buildings as instruments of subjugation or as literal connections to the unknown. Using this language for a public building has the effect of making the unknown accessible and invites ownership by the student population, who get to learn its secrets every day.

In plan the building is a simple oval: why this is not obvious when visiting the building is as difficult to describe as it is to perceive. Perhaps it is the inward curving external wall, which makes the shape of the building at ground level hard to relate to its form at the top, or perhaps it’s the further complication introduced by the building’s second layer of form, whose white curved form is offset from the primary oval, hinting at a complex internal program while distracting the eye from interrogating it. From outside, the position of the theatre behind the external wall is impossible to pin down. It is aptly described by Powell as being like the gimbal in a ship’s compass; you could imagine its form is somehow not fixed within the building through a denial of any discernible “lecture theatre” shape, whatever that may be, from any point in the building. The theatre itself, designed to be easily divided into two floors of smaller tutorial spaces should the shift towards online education continue, is almost an anticlimax given the eventful spaces beyond it. It is a perfectly functional auditorium equipped with the required technology and relieved by the inclusion of two slender windows either side of the lectern, a controlled distraction that looks out into one of the inner “paradise” courtyards.

The layering of space is a primary focus of Powell’s practice; as with TarraWarra, admission to the building is an event. It is a crossing between public and private layers that takes place not just a single step, but which is a journey taken through a series of entries and antechambers that draw you progressively deeper into the building. Unlike TarraWarra, however, in which the building opens to carefully framed celebrations of the bucolic landscape, this project maintains its isolation behind its monumental external skin, only opening, sparingly, onto the fledgling internal gardens and courtyard spaces. The effect is significant. A thorough sense of isolation from the campus proper is created, and is heightened by the fluid, modulating circulation spaces that ring the theatre.

This complex anteroom is a radical departure from an earlier scheme which preferred a single, airport-lounge-style room attached to the theatre. Instead, the expanding and contracting corridor encourages a sense of ownership of the space by allowing groups of students to find a space that suits them. The building as a series of layers is also a neat method of unifying the functional requirements with the form. The outer shell serves multiple purposes, creating for the university an iconic form while neatly resolving issues of shading and entry and exit, hiding back-of-house function and providing circulation. Powell uses the Sydney Opera House and its difficult additions as an example of how even the most celebrated buildings can suffer if the climate and the programmatic requirements are not a primary consideration in the original design.

With RMIT Bundoora West Lecture Theatre, the request by RMIT for an “iconic” form has been handled by Allan Powell Architects with the maturity and restraint of an architectural practice that understands that interest is not always created by the object that flashes the brightest or screams the loudest; that indeed, genuinely iconic buildings are often the ones that look like they have a secret to tell. 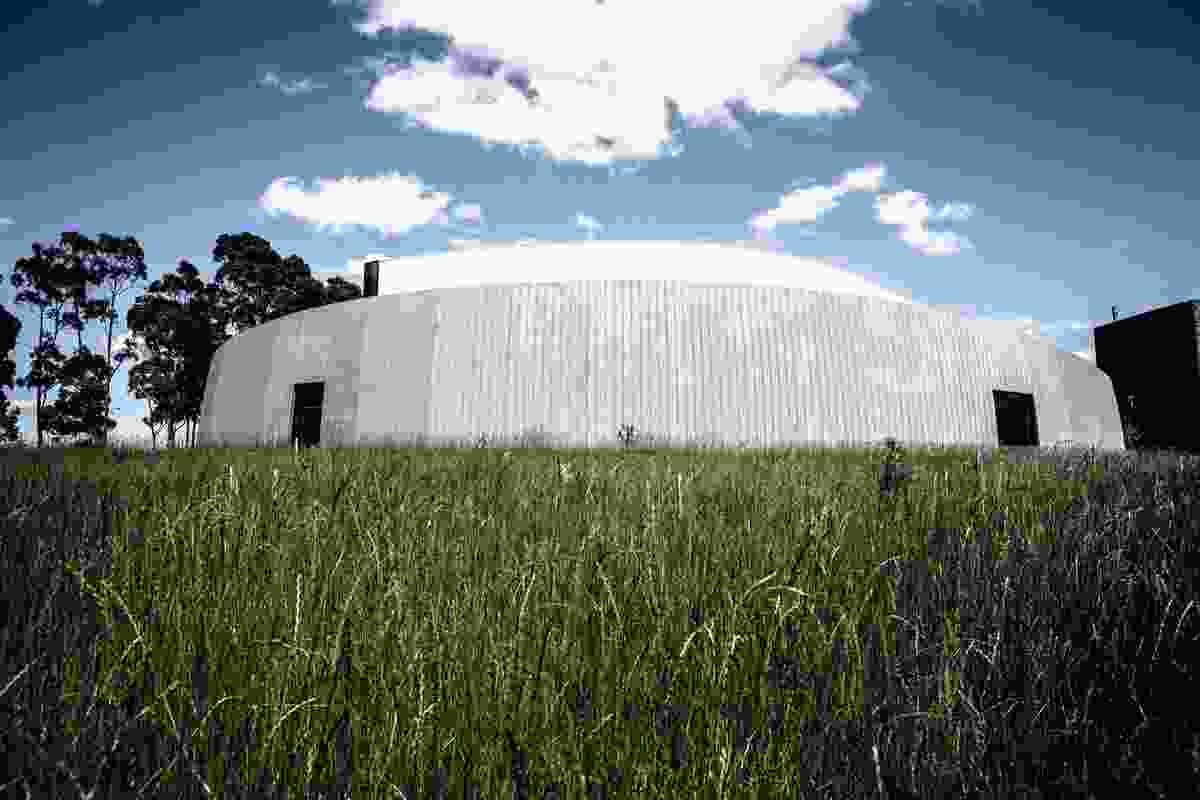 An “interstellar craft come to rest among the campus buildings”? 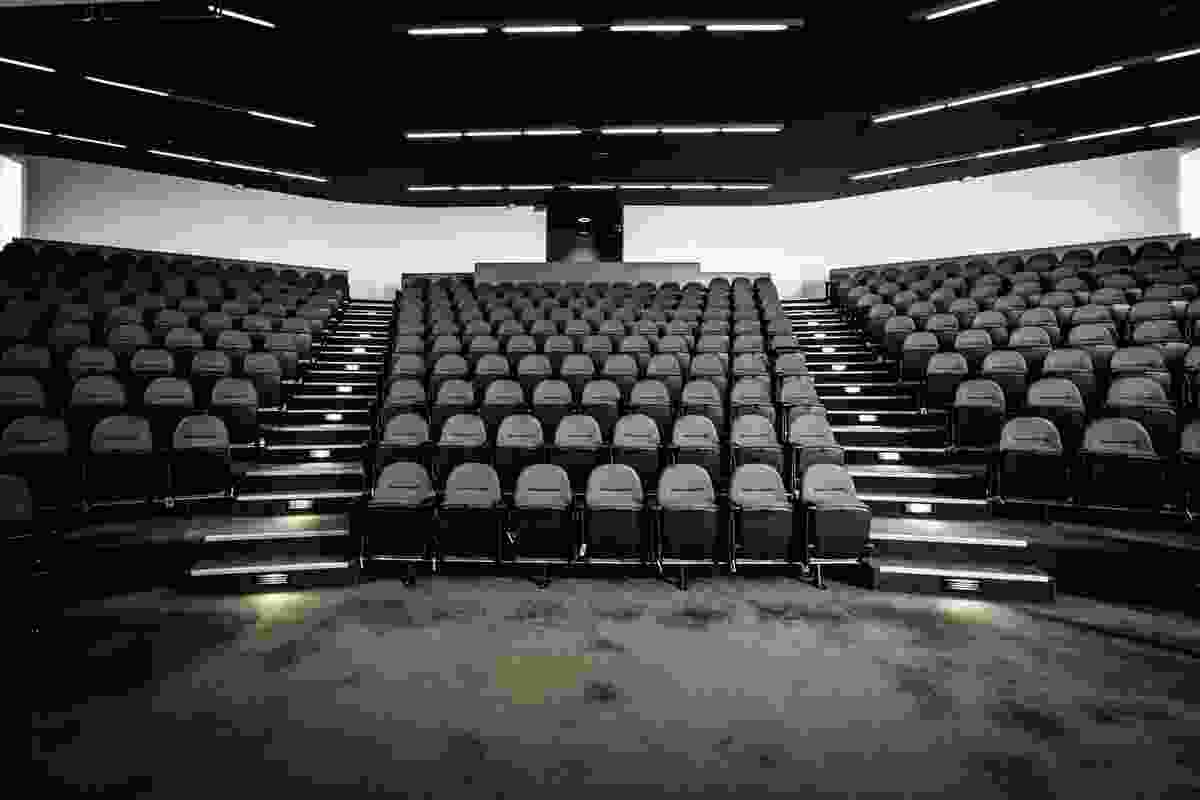 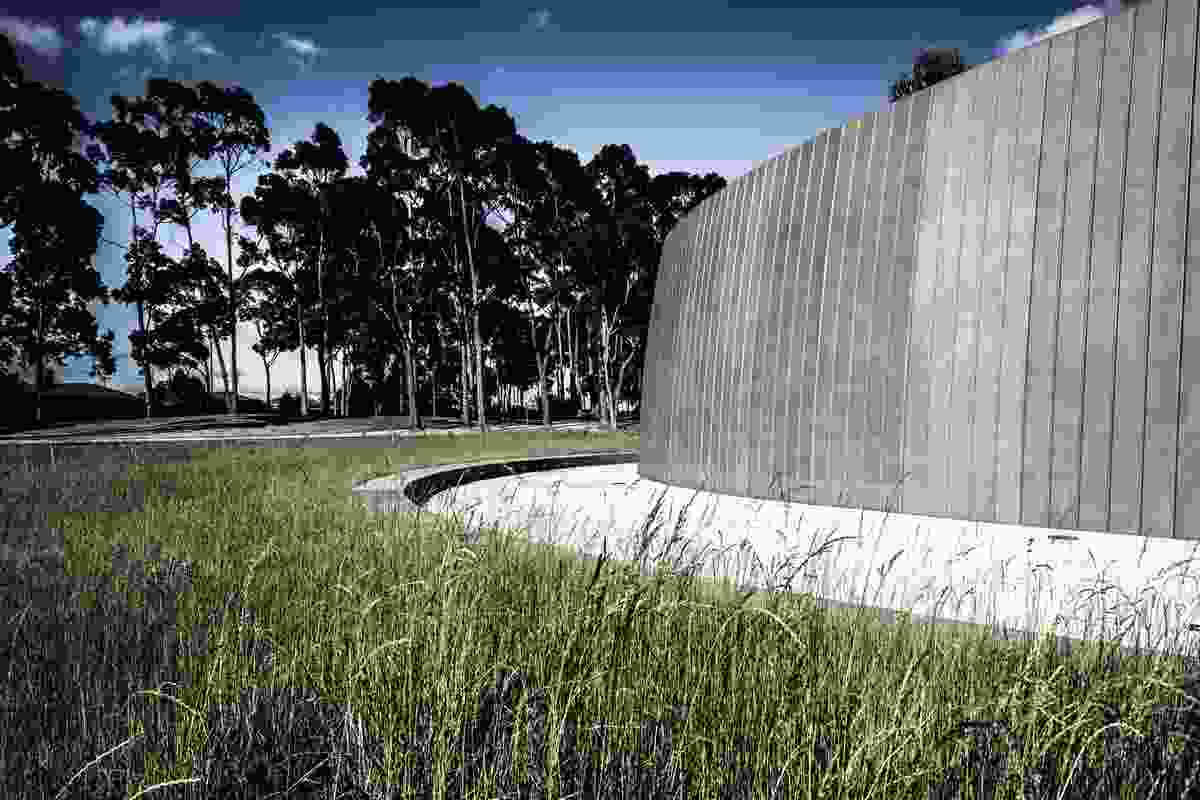 Its perimeter creates the impression of a subtle, mysterious object. 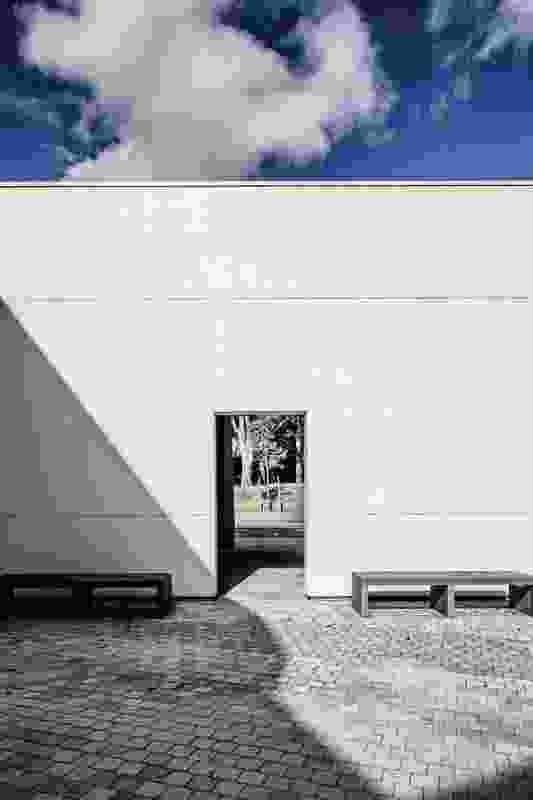 Only a few small appertures open to the internal courtyard and gardens. 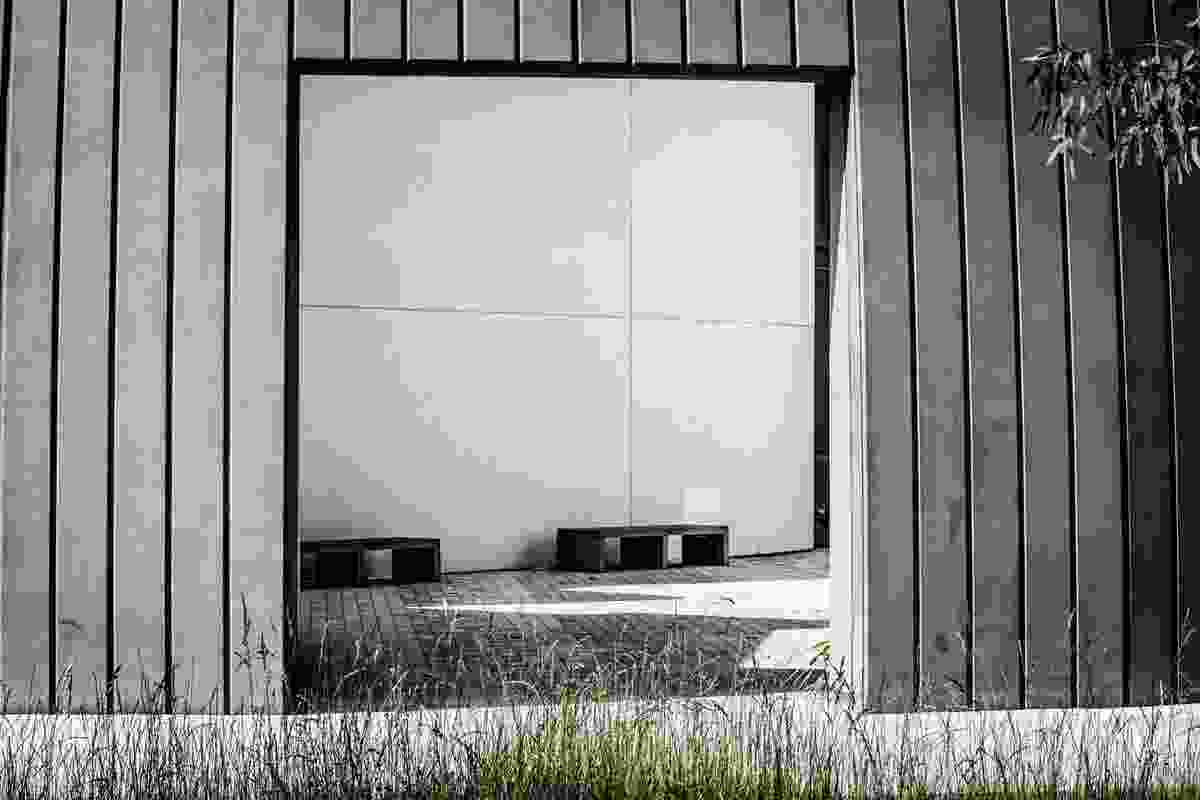 The offset second layer hints at a complex internal program.