Experimentation is at the centre of a single-bedroom house, designed by Archier, with genuinely new ideas and traditional technologies rethought.

Sawmill House sits above a dam, the north side opening to views across the water.

What is at the heart of making a good house? Perhaps the act of “making” itself. The Sawmill House by Archier has been a journey, one between places and brothers, between intent and agility. Let’s travel up and around the Hume Highway to Yackandandah, in Victoria’s north-east region. The area is a mix of agriculture, forestry, tourism, food and wine; its heyday was the gold rush. Just on the edge of the modest town is its old sawmill, now a local artist’s compound and the site for a young family’s home.

The Sawmill House is a collaboration between its architects and owner-artist Benjamin Gilbert, whose medium is often large sculpture. Ben is brother to Chris Gilbert, one of the three young designers who make up the emerging architecture practice. Both Ben and Chris grew up in “Yack,” and the project is a return home for the skilled and hands-on brothers. The site is still a place of making – the former sawmill is now Ben’s sprawling workshop. On arrival at the site the informal collection of rural sheds and towers presents itself while the newcomer, the house, is hidden. An almost ruinous wall of concrete comes into view, with the front door and verandah end offering entry.

The house is buried on one side and on the other it opens up and juts out into the rolling landscape. It sits atop a dam, the north side opening onto views across the water and beyond. The orientation is perfect – open to the view on the north side, solid with small openings on the south side. Experimentation has been at the centre of this project, in terms of both materials and building systems. And while the house as prototype is a well-known idea, here there are some genuinely new ideas, and these come from traditional technologies rethought.

The first is material – large “waste” concrete blocks. These roughcast blocks are made from leftover concrete in the mixing truck after it returns to base. To avoid the concrete setting in the mixer it is poured into large forms and then sold after it has set, typically for retaining walls. The blocks are different colours based on the concrete mix used for a particular job, some with pigments; bits of red, for example, scatter these new walls. The crudely laid blocks are varied and textured, making a rich wall material free of artificialness. The walls are single skin and can support themselves without mortar – brute weight and size alone give them the strength. The contrast between the blocks and far finer materials makes the concrete read as rugged and shows the delicacy of other materials used. The house is both rough and smooth.

The second is mechanical – a lot of the house moves. The focus of this is the verandah. A traditional space of transition, this house reinvents the most Australian of spaces. The roof of the verandah slides – all of it – retracting its fifteen-metre length to open the house to greater northern light when needed. The verandah’s macrocarpa batten screen also opens up – one large section slides while the other pivots, unveiling the verdant view. This allows the reading of the landscape to change and further shades the verandah space in summer.

The main interior living space runs along the verandah, merging with it through the use of a giant glass sliding wall. Again this is a bespoke piece of engineering, with concealed chain track and electric motor designed and built by the brothers (with some help from the old man). The living space is lined with locally milled red stringybark boards on both floor and ceiling – an expanse of warmth above and below you. This is contrasted by the shining glass of the north wall and the shimmering brass-lined cupboards on the back wall. The rugged concrete blocks come inside on the west side, the fireplace sitting in front. The simple kitchen integrates and unfolds onto the living space, while the compact bathroom buries itself into the wall further along, in the more private side of the house.

The house’s single bedroom moves also. The entire east wall is a glass pivoting door that opens onto the walled, grassed courtyard, a wonderful sheltered space that is also bounded by the robust concrete blocks. The planning and the courtyard recall the work of Ludwig Mies van der Rohe, who reinvented what a house might be with the Farnsworth House, Tugendhat House and a series of brick courtyard houses. Mies van der Rohe engaged at a component level – architecture for him was “building art.” His was a language of restraint but rich spatially, with walls and screens inside and out. The palette here is more textured, more agricultural but just as clear.

The spirit of experimentation here played out during con-struction, during which time systems were invented and the design evolved. This wasn’t a traditional building contract situation; the familiarity of people involved allowed an overlay of endeavour and separations between designer, builder and client were blurred. Everyone was in the same boat. This rare occurrence has been fully exploited – the making of this house was born of the understanding of site, innovation and hard work.

Doors
Custom door hardware in brass and custom doors in burnt/tung-oil finish, both by Agency of Sculpture.

Other
Custom furniture throughout by Archier and Agency of Sculpture. 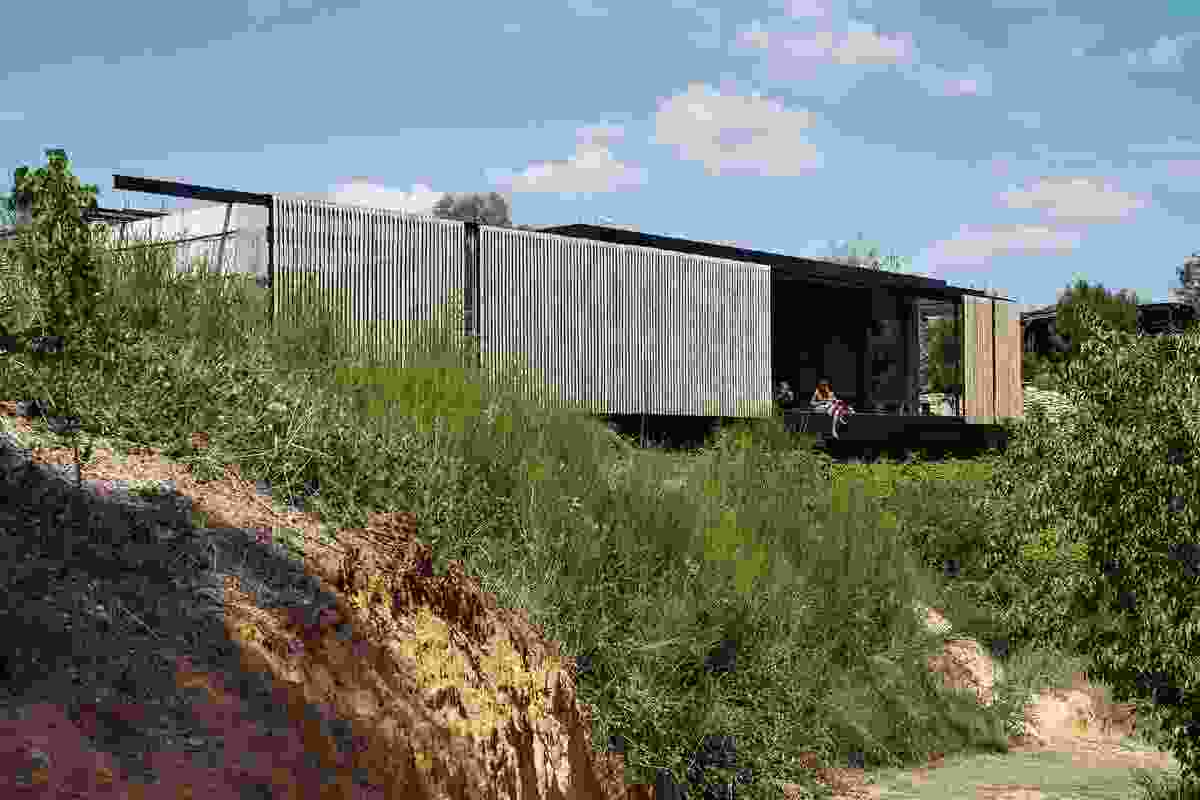 Sawmill House sits above a dam, the north side opening to views across the water. 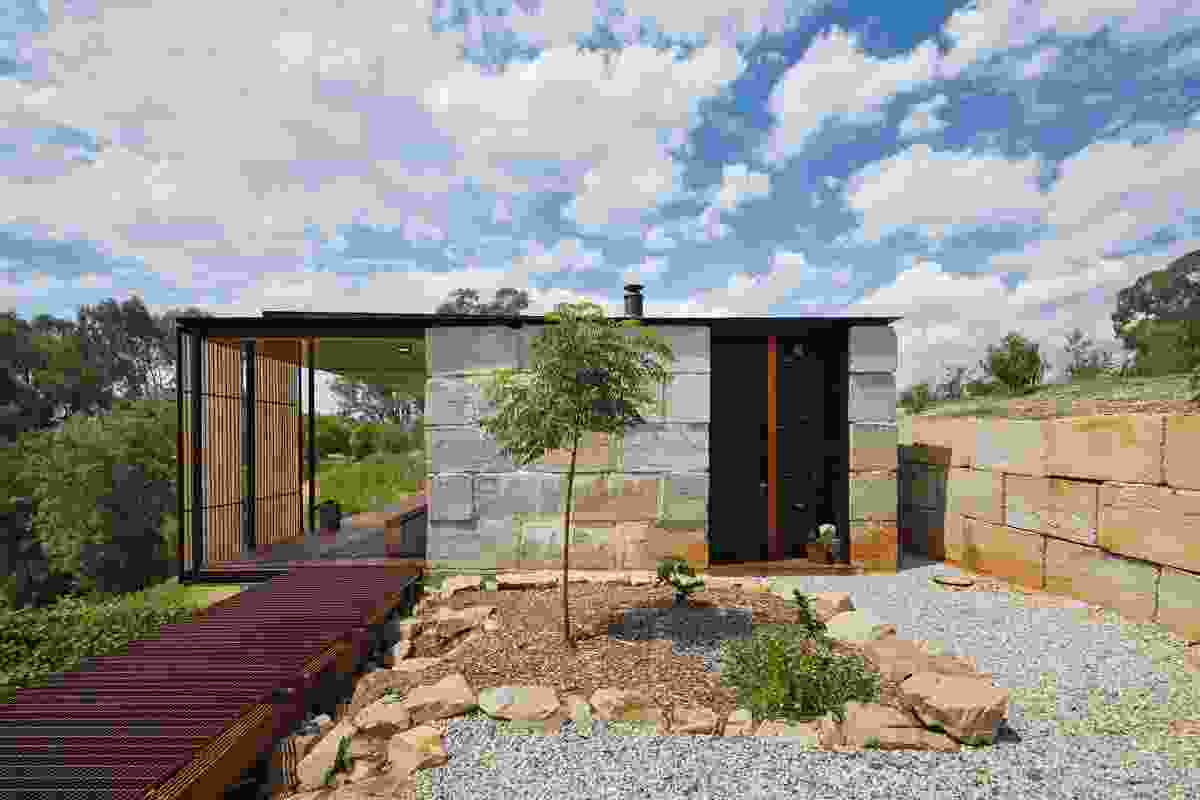 On arrival the new house is hidden, but further exploration brings an almost ruinous wall of concrete into view. 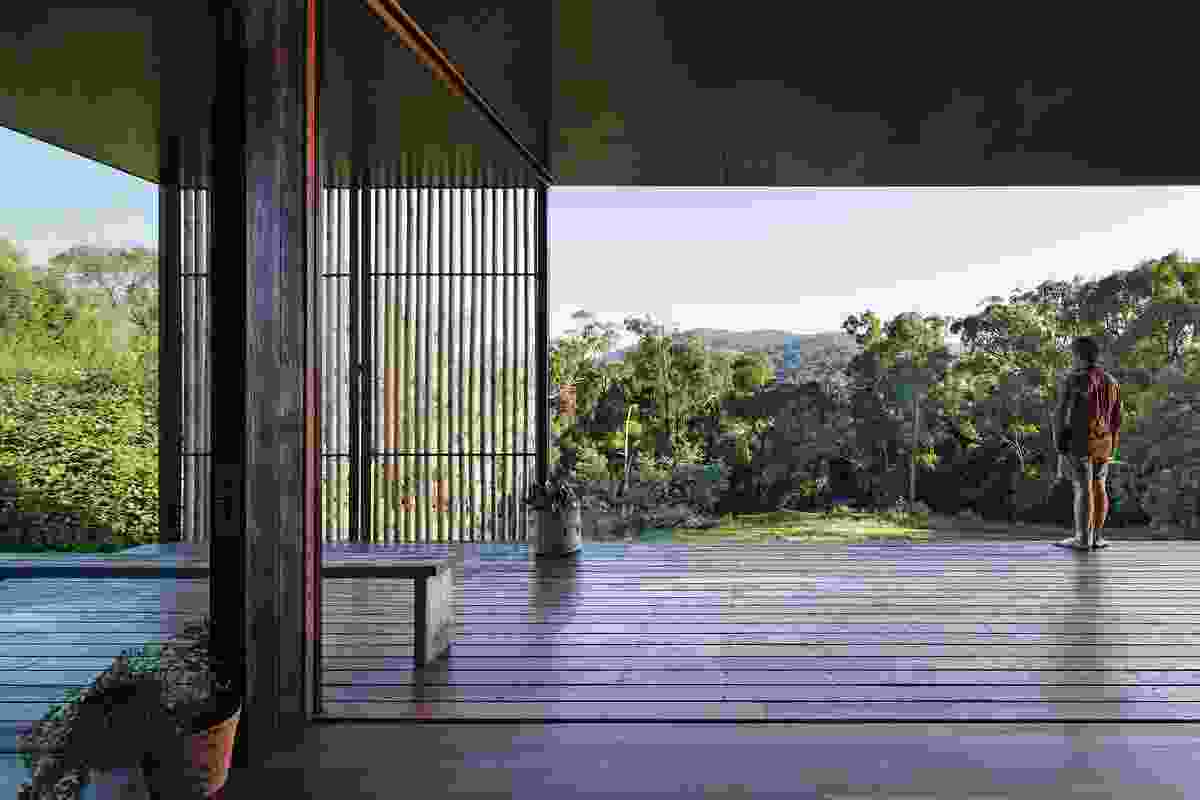 The roof of the verandah slides, retracting its fifteen-metre length to open the house to greater northern light. 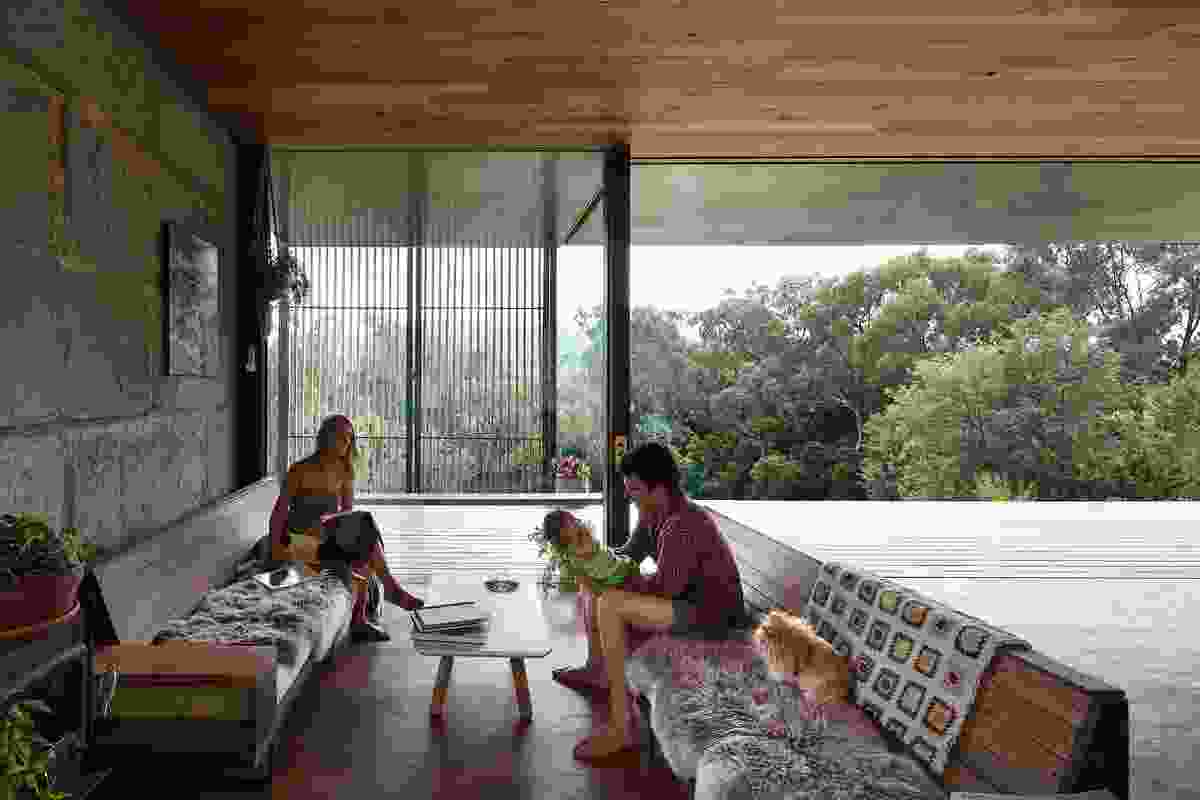 The main living space runs along the verandah, merging it through the use of a giant glass sliding wall. 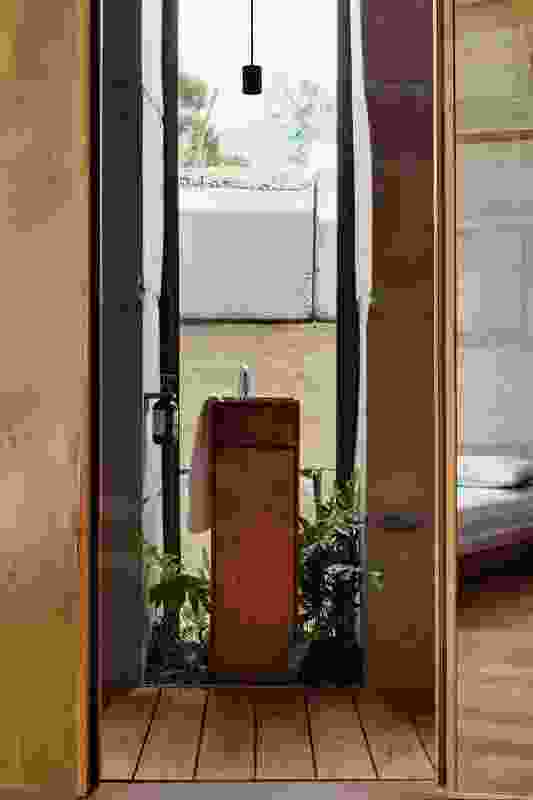 On the more private side of the house, the compact bathroom buries itself into the wall. 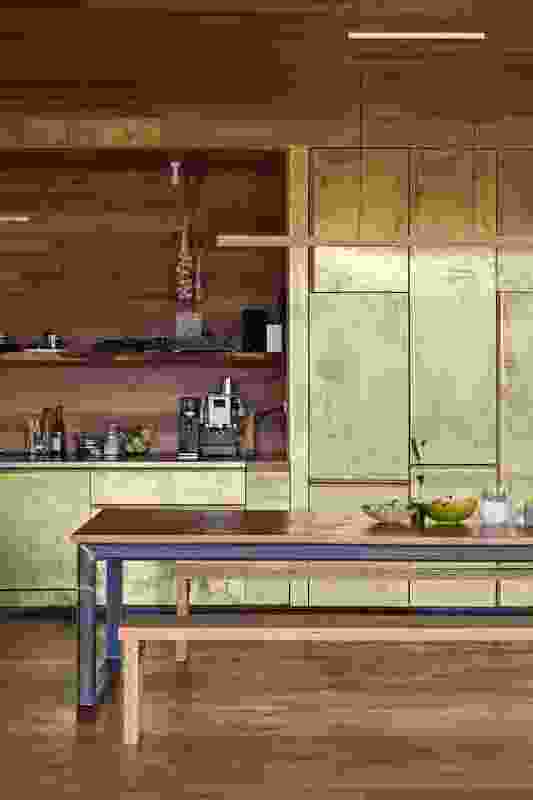 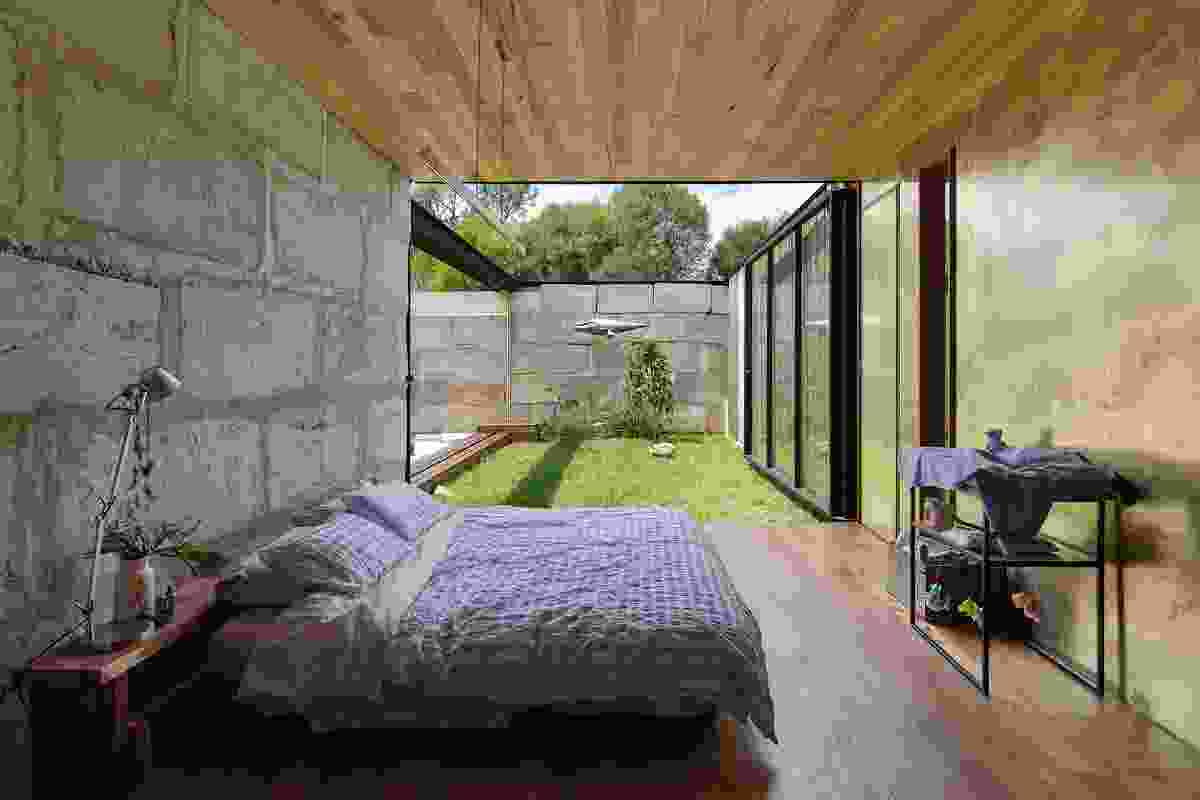 The entire east wall of the bedroom is a glass pivoting door that opens onto the courtyard. 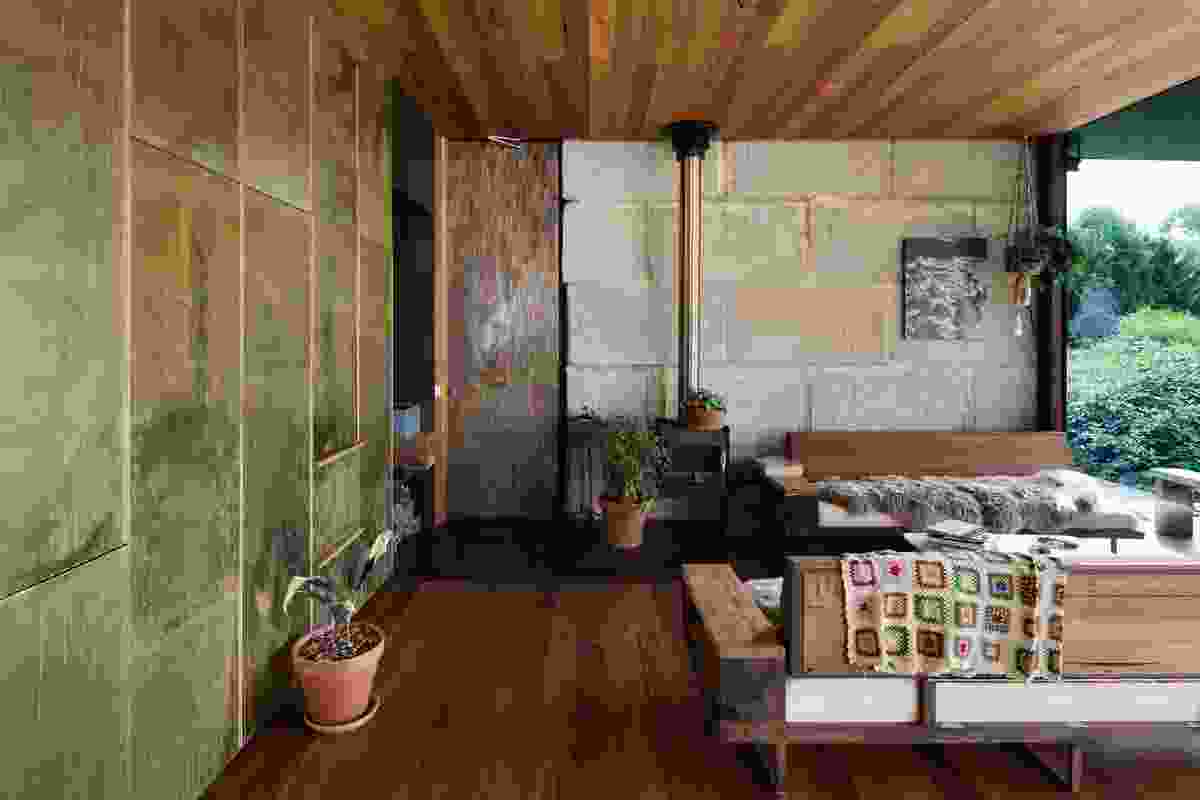 The living space is lined with red stringybark boards on both floor and ceiling, the rugged concrete blocks coming inside on the west. 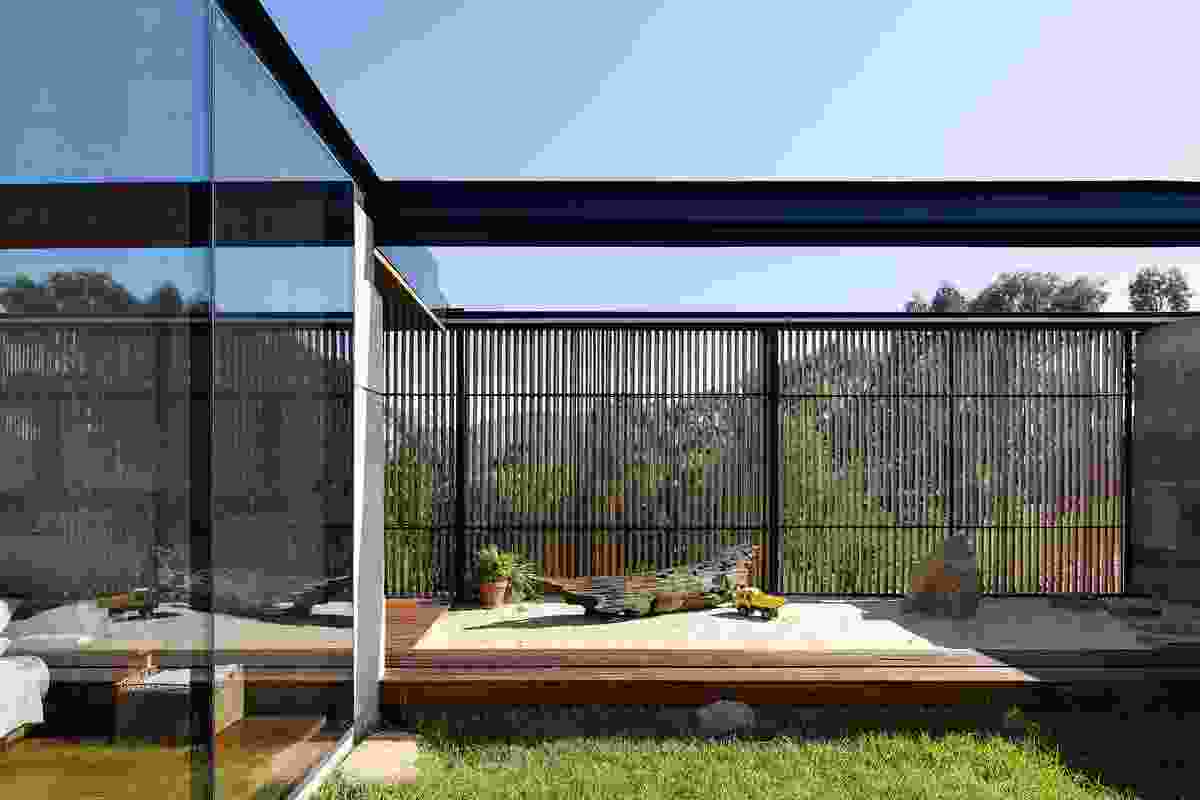 The planning and the courtyard recall the work of Ludwig Mies van der Rohe, who reinvented what a house might be.