The prototype being tested at the University of Canterbury’s engineering lab.

He is Christchurch born and bred and did his first degree in engineering at the University of Canterbury in the late 1960s. He then started work as a consulting structural engineer, first for Holmes Consulting Group, then – after completing a Phd in timber structures at the University of British Columbia – he returned to Christchurch and set up Buchanan and Fletcher in 1984.

It was while he was studying at Columbia he moved away from steel and concrete and developed a keen interest in wood as a structural material and that interest ultimately led him to sell his shares in his company, and join the University of Canterbury. He is now Professor of Timber Design at the university, where he teaches and researches structural design. His main interest now is multi-storey timber buildings, but he also has interests in earthquake engineering, fire safety and the environmental impact of timber, steel and concrete buildings.

I know all this, because I gatecrashed a presentation Professor Buchanan was giving at Canterbury University as part of the Seismics and the City event held recently in Christchurch.

“I’ve been part of the structural engineering team here for the past 20-odd years,” says Buchanan. “We’ve done a lot of work on earthquake engineering, but of course then we hadn’t had a large earthquake in New Zealand for 80 years, not since the Napier earthquake.”

He says the severity of the February earthquake in particular was exceptional. The horizontal and vertical accelerations were some of the highest ever recorded anywhere in the world. The buildings in Christchurch were simply not designed to withstand such a ferocious event.

Ironically, he was in the Holiday Inn attending an earthquake engineering conference when the February earthquake struck.

“The shaking we had in Christchurch was about twice what buildings are designed for. We design for accelerations of around 1G and the vertical acceleration was near 2Gs. It’s no wonder we had so much damage,” he says.

The buildings that fared best in the earthquakes were ones that had seismic design features and wooden buildings, in particular, engineered timber buildings, he says. “It’s very hard to find much damage at all. I don’t know of any serious damage to those kinds of buildings.”

Base isolation – another Kiwi invention – is a proven seismic design solution, as the Christchurch Women’s Hospital (still standing) is testament to, and there’s no doubt that base isolation will feature in the rebuilding of Christchurch.

Another solution, he says, is rocking frames and walls where buildings move in an earthquake then snap back into position with no damage. This is what his research is all about – post-tensioning techniques used to assemble structural engineered wood for both frame and wall systems.

The first building in Christchurch to use this technology – but in concrete – was the Southern Cross Hospital, which utilises the pre-cast seismic structural system (PRESSS) and it too came away relatively unscathed after the earthquakes.

Importantly, both these buildings were able to be used right after the quakes, providing medical assistance to those who required it. Business continuity is a happy outcome of seismic design. The ability to be up-and-running quickly without the need to relocate a business is a real benefit to property and business owners.

In fact it was the technology behind PRESSS that started Andy and his team on the path to research a similar system in timber. The story goes that colleague and associate professor Stefano Pampinin – who is managing the research programme and is currently on the advisory board for the Canterbury Earthquakes Royal Commission – had long used a timber model to teach students the concept behind PRESSS. After presenting the model to students time and time again, Stefano found himself asking: ‘why don’t we try this in timber?’

So they did. The university started research in earnest and sourced funding from the Ministry of Science and Innovation and set up a research consortium. The result was the Structural Timber Innovation Company (STIC) and, in association with Carter Holt Harvey, Nelson Pine and others, they set out to commercialse the technology.

Professor Buchanan is taking a few of us on a tour of the labs. We are standing in the original structural engineering lab, which was almost brand new when a young Andy Buchanan was a student at the university in the 1960s.

I see testing machines, pulleys, chains and lots of equipment. “We can build anything here and we can bust anything here,” he says. Looking around I see what he means. Huge, crumbled lumps of reinforced concrete litter the lab .

Professor Buchanan points to a large blue structure with steel chained to it. “That’s our toy shaking table. We can run little earthquakes on that.”

He pauses then adds “But nothing like we need to be able to do. So our long-term plan is to build something much better than that. We can do an awful lot in here – and we’ve done a lot in here over the years – in terms of steel, concrete and timber structures.”

We walk through the lab and up and down a number of stairs until we reach what he calls ‘the extension’ which is where they built and tested the prototype of the post-tensioned LVL building in 2010. Mainzeal helped them with the building of the prototype inside the lab – and then the subsequent dismantling and rebuilding of it on the grounds of the university, which they did between the September 2010 earthquake and the February 2011 one.

The building proved the technology works and has suffered no damage through the February earthquake and the numerous aftershocks since. The building now houses the STIC office and is used as a showcase for the technology. STIC have formed a new company called EXPAN to market the technology and new pre-fabricated engineered wood structural building systems.

These building systems will allow multi-storey commercial and long-span industrial buildings to be easily designed and built using engineered timber materials. Buchanan says that timber can now compete with steel and concrete.

Wood has the same strength as concrete and its weight is about a quarter of concrete and because it’s prefabricated, building costs can be kept to a minimum. It’s also a sustainable and renewable resource. Here in New Zealand we have a well-established wood industry based primarily around Pinus radiata.

Professor Buchanan – who is also research director at STIC – says that they are working with BRANZ to prepare guidelines for industry such as design guidelines, analysis software, material properties, embodied energy and sustainable building information and fire resistance and ratings, as well as durability information and specifications.

LVL is a strong and versatile product. It’s made of thin veneers of timber, which are glued together following the grain, making it stronger, straighter and more uniform than ordinary lumber. It is much less likely than conventional lumber to warp, twist, bow, or shrink due to its composite nature. And because it’s manufactured under controlled specifications, LVL products allow builders to reduce onsite labour.

“Wood is no longer a piece of four by two. We can now do anything we like with it,” says Buchanan.

The first building in New Zealand to use post-tensioned LVL timber frames is the just opened College of Creative Arts (CoCA) at Massey University in Wellington. LVL is used in the building and columns and beams are made into a post-tensioned timber frame, with composite floors combining LVL joists and concrete slab.

Another building utilising post-tensioned timber – this time using LVL shear walls – is the award-winning Nelson Marlborough Institute of Technology arts and media building. As well as post-tensioned cables, it uses U-shaped energy dissipaters between the walls, which are design to absorb seismic energy. The Caterton Community Centre is another building that uses a similar design system to the NMIT building.

Cross laminated timber (CLT) is a relatively new engineered wood product that uses boards crossed laminated and glued together, similar to thick plywood, which means big panels can be made. The first batch to be manufactured in the southern hemisphere is being produced by Nelson company Xlam and Professor Buchanan says there is already a lot of interested in this new material.

Overseas – particularly in Europe and Canada – multi-storey timber buildings are being built using LVL and CLT products. In London the world’s tallest wooden building, the nine-storey Stadhaus building, was constructed using CLT panels and in Canada plans are afoot for a 30-storey timber building. In Melbourne, a 10-storey apartment building is currently being constructed, which will become the tallest building in the world to be made out of CLT.

Professor Buchanan says we have a real opportunity to use engineered wood and seismic design in the rebuilding of Christchurch. There are a number of post-tensioned timber framed buildings already on the drawing boards.

“Christchurch isn’t all going to be wood but some of it certainly will be,” he says. “Some of our post-tensioned technology will be used in these new buildings. For us here at the university it’s an opportunity that we’re very pleased to be involved in.”

He says that damage-avoidance design will become the norm in New Zealand. “For the new buildings in Christchurch, we want to build buildings where the same thing won’t happen again when we get our next earthquake. Because we will get more earthquakes.”

And with the opening of the first post-tensioned LVL-framed building in New Zealand – the CoCA building at Massey University, Wellington – Professor Buchanan and his team at the University of Canterbury will finally see all their hard work and innovation come to life. 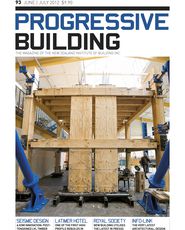 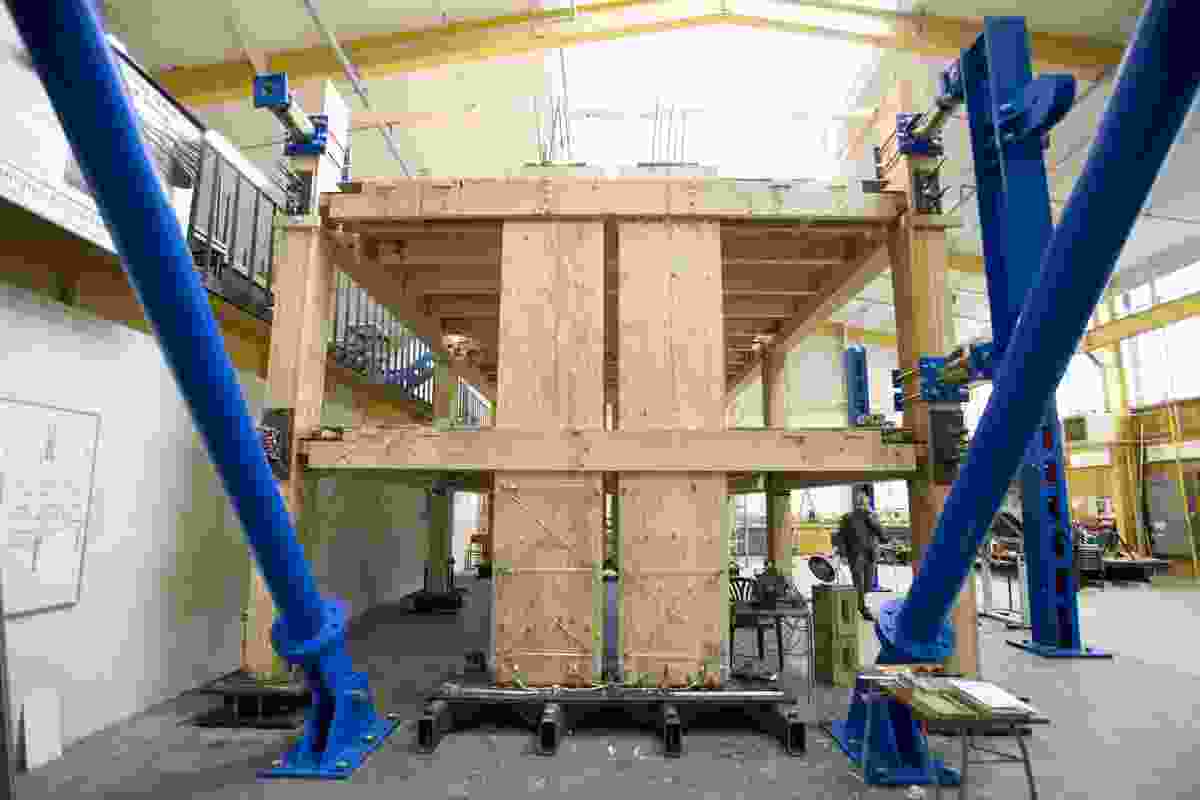 The prototype being tested at the University of Canterbury’s engineering lab. 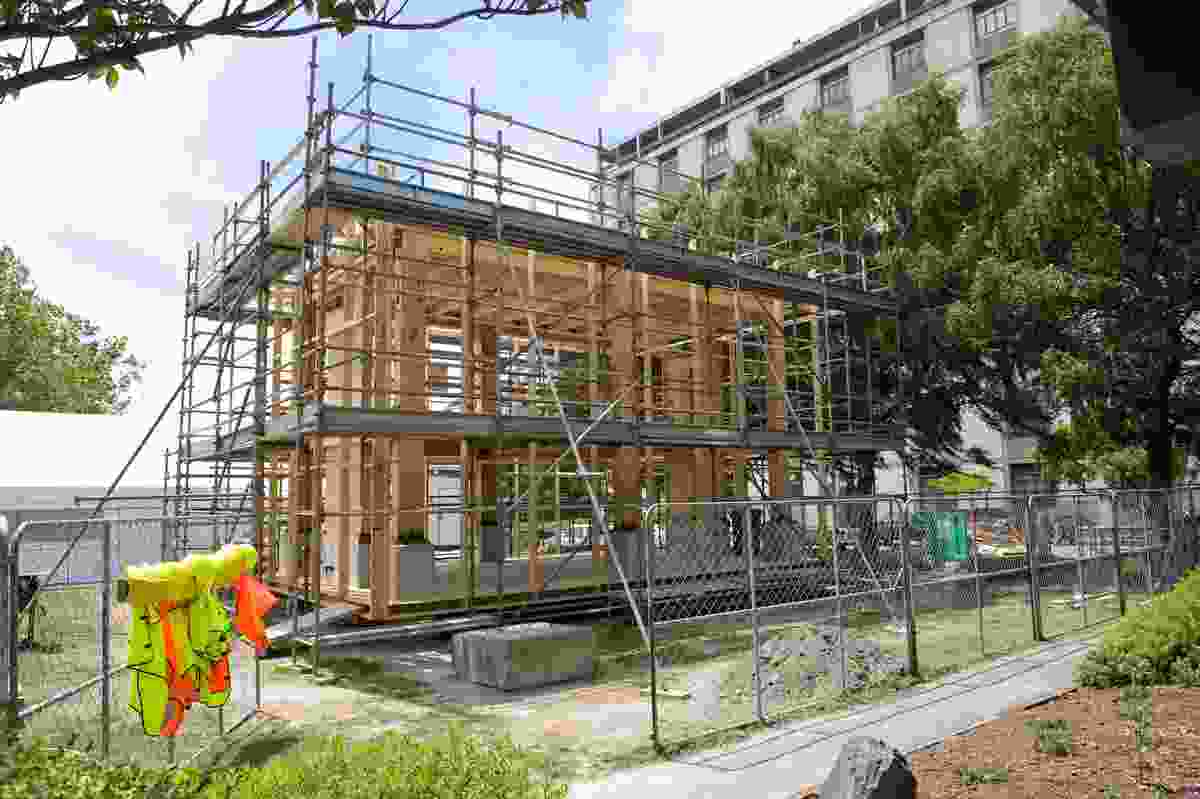 The prototype being reassembled in the grounds of the university. It came through the February earthquake undamaged and proved the technology worked. 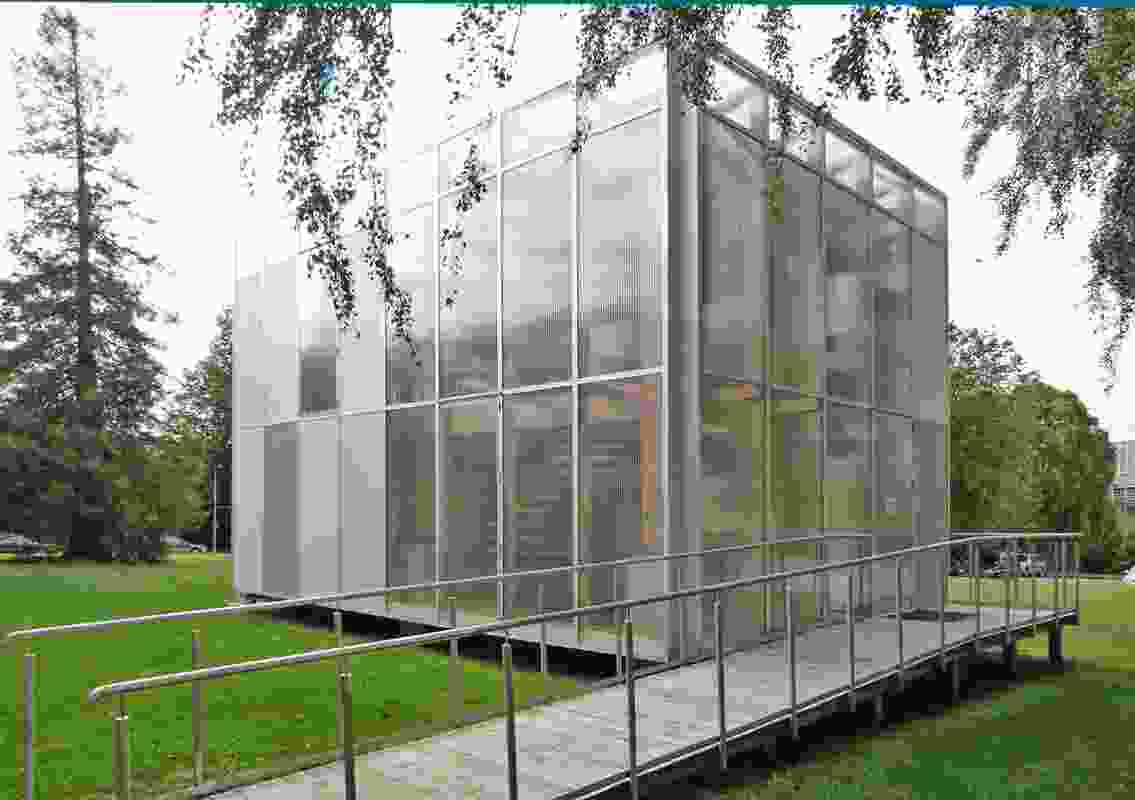 The completed building is now the STIC and EXPAN offices. 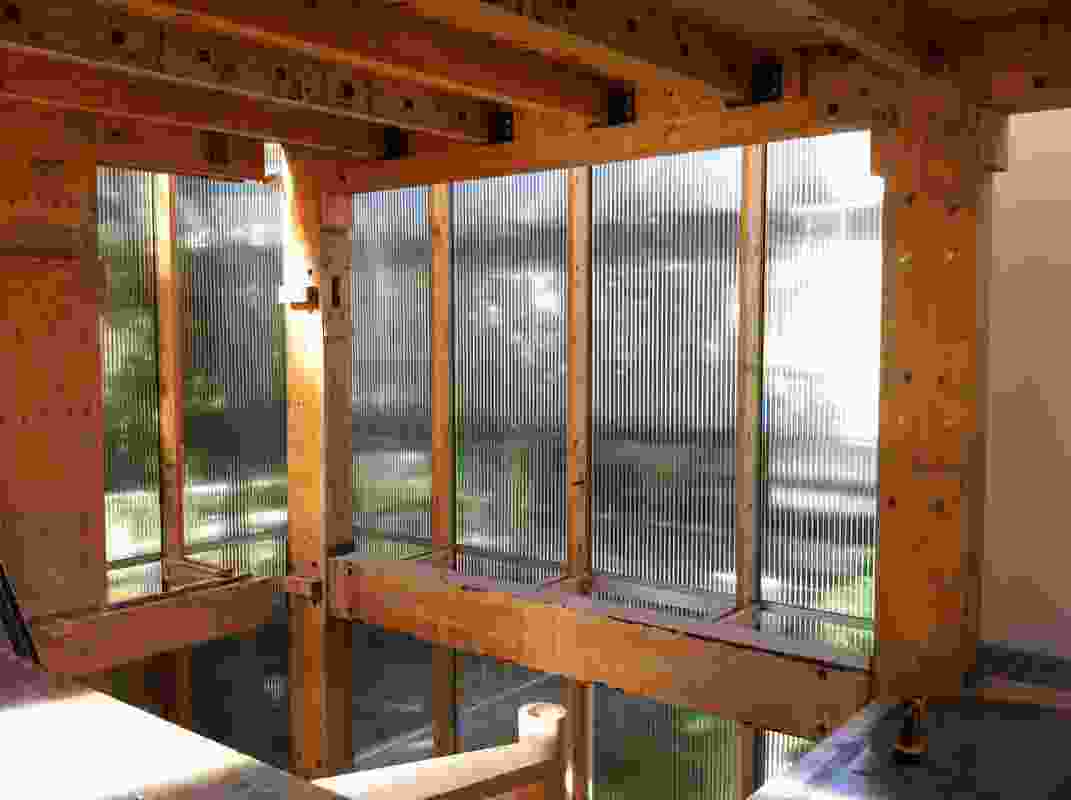 The prototype showcases the technology behind post-tensioned LVL timber buildings. 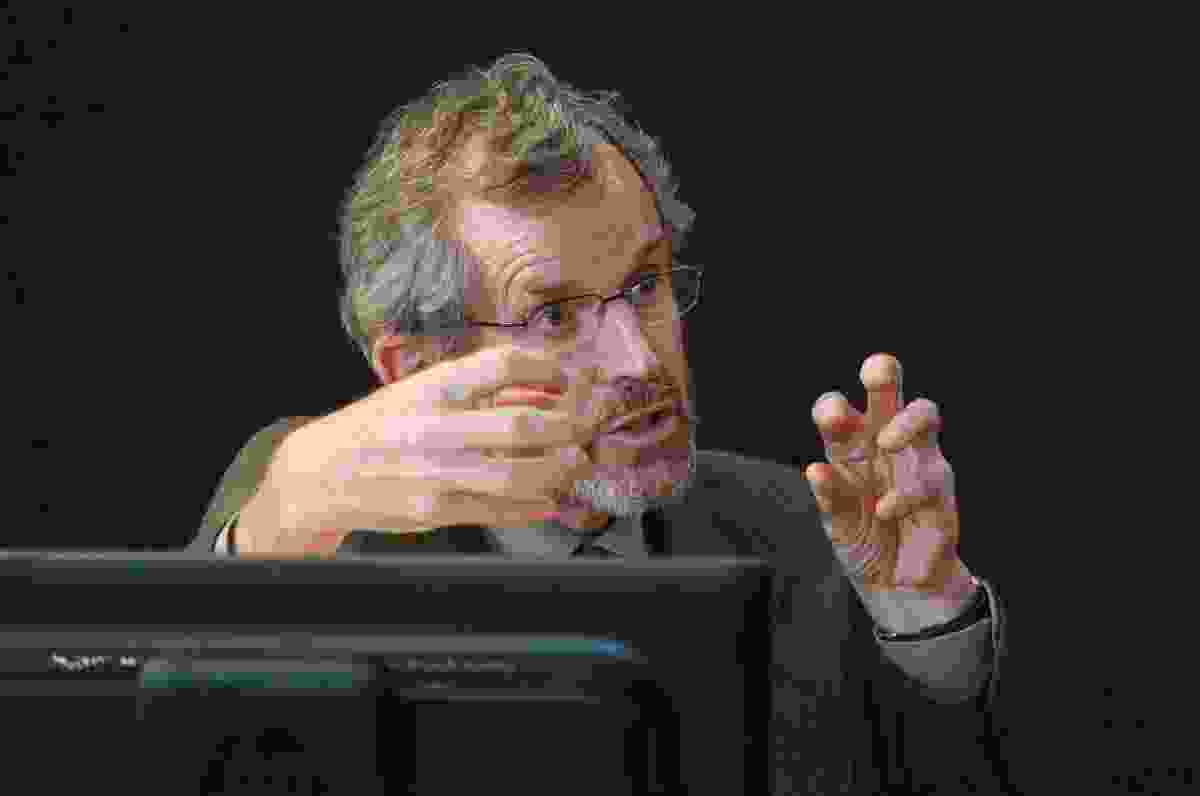 Professor Andy Buchanan: “We have a real opportunity to use engineered wood in seismic design and the rebuilding of Christchurch.” 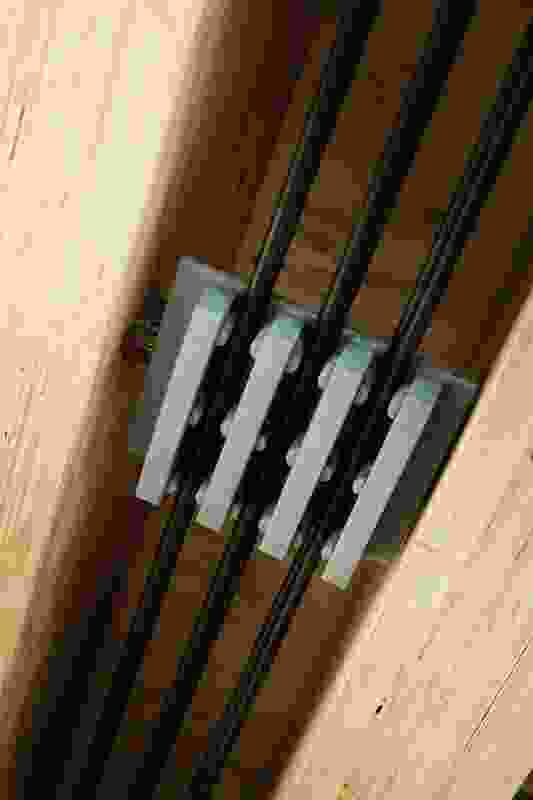