A Sydney house by Nathan Lester Architecture is in dialogue with its natural environment. The site’s topographic contours, sandstone ledges and bush areas have triggered a variety of spatial responses.

A timber-clad wall continues from the inside to the outside.

In reading architecture, distinct cues found in the context or formal aspects of a house allow an understanding of the architect’s approach or ideas. In some instances these can be quite elusive, making the project that much more intriguing. Shelly Beach House by Nathan Lester Architecture is indeed such a project. Despite commanding a prominent street position, the manner in which the house’s massing addresses the street means that what is beyond is not immediately evident. It is only in the actual experience of the house that an appreciation of its didactic qualities becomes apparent and, as such, allows the user to participate in the myriad spaces and amenities it provides.

The central theme to the house is the site and its attributes – a triangular plot composed of five distinct rock ledges that span its width and hold a variety of mature native trees, creating a somewhat sublime quality. Critical to the success of the project was the congruence of sentiment held by both the client and the architect towards the site. The sense of respect towards it and the inherent natural qualities therein led, by careful interpolation of levels, orientation and program, to the careful placement of the various built “pavilions.”

Splitting the house into different functional zones has meant that the main living level, which is open on both sides, is afforded the prime location, facing north to the vista across the park.

Splitting the house into different functional zones has meant that the main living level, which is open on both sides, is afforded the prime location, facing north to the vista across the park. It offers ocean glimpses and is connected to the largest overhanging rock, pond and garden. The more private areas, including bedrooms and utility spaces, are stepped according to site topography in alignment with the western boundary.

This layout ensures that all spaces have access to either northern or eastern sunlight, while retaining and being connected to the beauty of the rockscape, which is core to the identity of the house. Indeed, it is the site itself that holds the various programmatic parts of the house together and focuses them to the centre, resulting in a continual dialogue between built and natural environments.

The irregularity afforded by the site geometry is advantageously interpreted into a splayed plan type that opens towards the centre of the site in a gesture that invites the landscape to participate in the architecture. Within this central area are located the primary living spaces – the kitchen, dining and family rooms – which form the single-story pavilion at the front of the house. Opening to the north and south, this ensemble is articulated by a sensitive use of materials that blend and complement the natural colours of the site.

A black timber-clad wall flanks the side of this large room and helps divide the formal lounge area adjacent to the main entry while relating back to the upper pavilions, which are clad with the same material. The doors to both the rear and front of the living room completely slide away into pockets within the wall and on the outside of the building.

This wall continues seamlessly from the inside to the outside, blurring the distinction between interior and exterior spaces and further connecting the building to the site. The colour and the cladding, along with the open doors, allow the living space to be read as more of an outside room; the eye is led out to the garden.

Representative of the overall approach to the project, the living space is endowed with a multitude of functions and purposes as well as aesthetic significance. Forming part of the only two-storey element on the site, the adjacent central wedge contains bathrooms and storage areas that act as a spatial and visual division between various internal and external spaces, and directs prevailing breezes into the house for cooling.

The verticality is also visually enticing, offset against the mass of the gentle sweeping horizontal sandstone wall that anchors the house into the site at the lower level. Scale is deftly articulated by elements such as the louvre blades, which are both functionally and aesthetically important, as well as a considered palette of natural materials and glazing. The two-storey mass is thus played off against the single-storey living pavilion, providing the viewer with a visual conundrum as to the extent of the remainder of the house, which is larger than it seems.

To preserve the rock ledges, the bedrooms have been designed as individual pavilions stepping up the site, with each cantilevered on concealed steel beams, gently levitating above the rock.

The private rear sections are organized along a central hallway that follows the site’s topography, contains a bridge element and terminates with a view of the last rock ledge, meaning connection back to the site is constantly reinforced as you walk through this space. The bridge element spans the largest rock shelf and can be completely opened to offer views back to the rock, trees and pond. This gives a feeling of separation to the bedroom pavilions at the back of the site.

To preserve the rock ledges, the bedrooms have been designed as individual pavilions stepping up the site, with each cantilevered on concealed steel beams, gently levitating above the rock. Each bedroom engages with the outside in its own direct manner; small open decks project outwards into the site and personal space is created by orientation and outlook. Each room can be entered externally or internally, a feature that works for the family and the way it functions.

Flexibility here is not given lip service but has been designed as a genuine part of the way this portion of the house functions in relationship to the greater whole. It is this holistic approach that makes Shelly Beach House engaging on many levels, refreshing in its approach and imaginative in its range of materiality. There is no overindulgence, only the careful and appropriate application of knowledge in the making of an intelligent house. 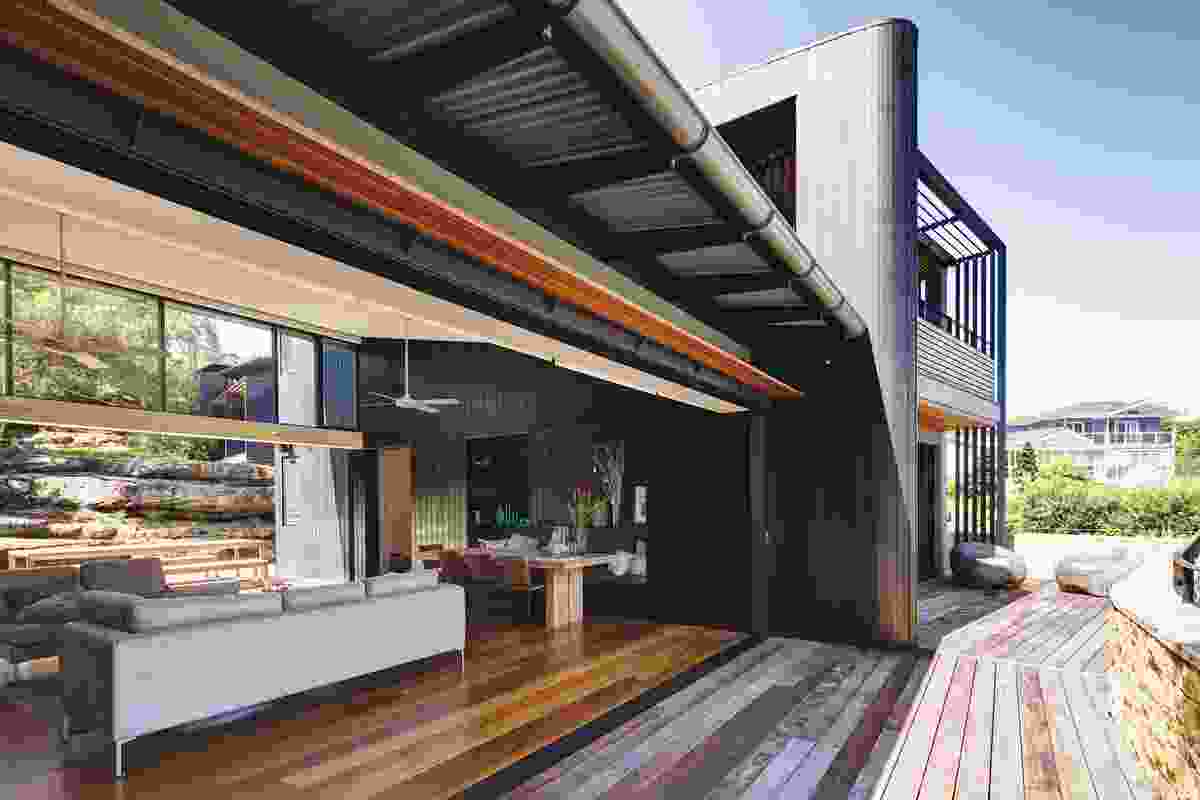 A timber-clad wall continues from the inside to the outside.

The site’s inherent beauty is considered in the pavilion placement. 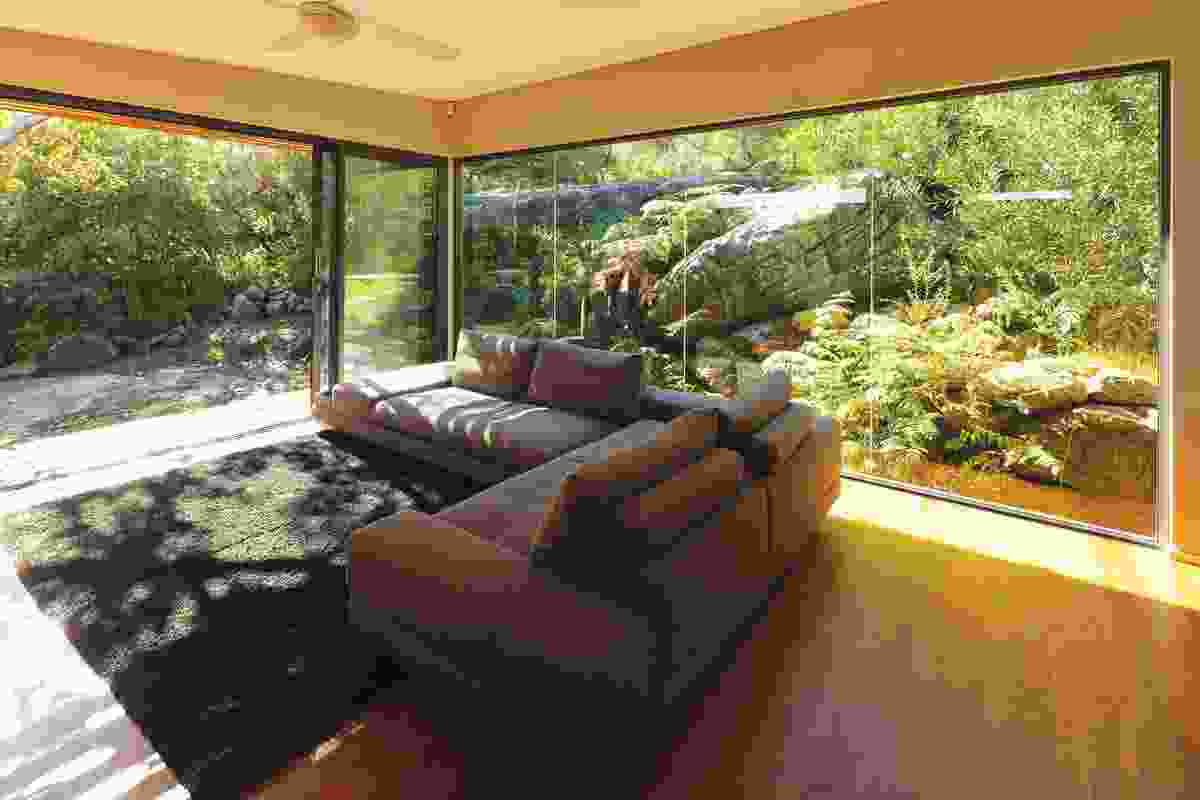 All spaces are connected to the rockscape in some way. 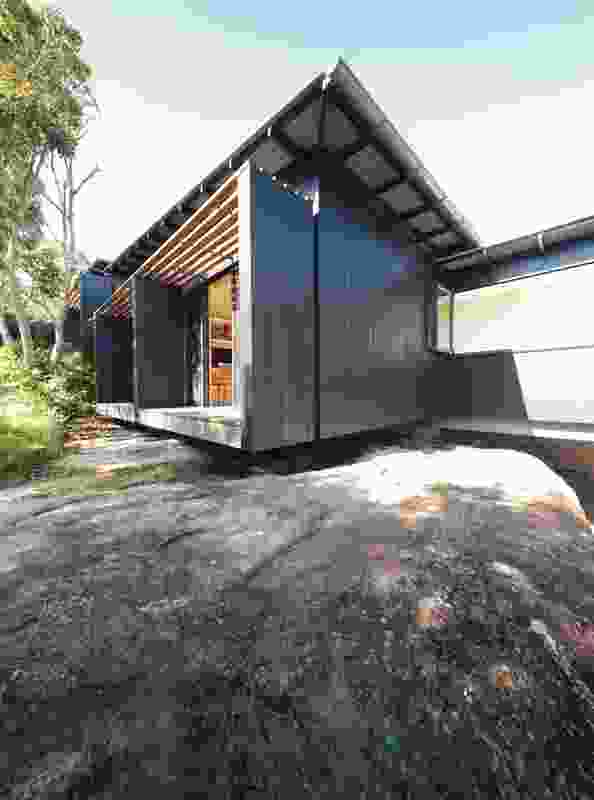 A series of bedroom pavilions hover above a rock shelf. 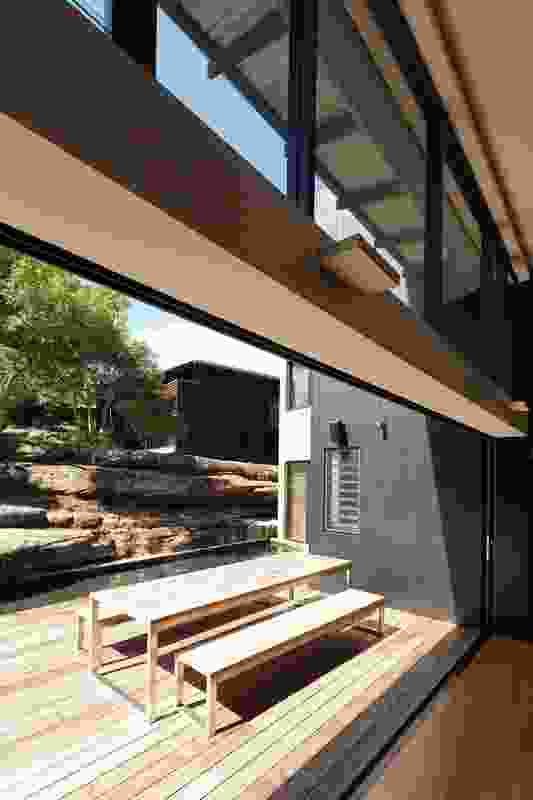 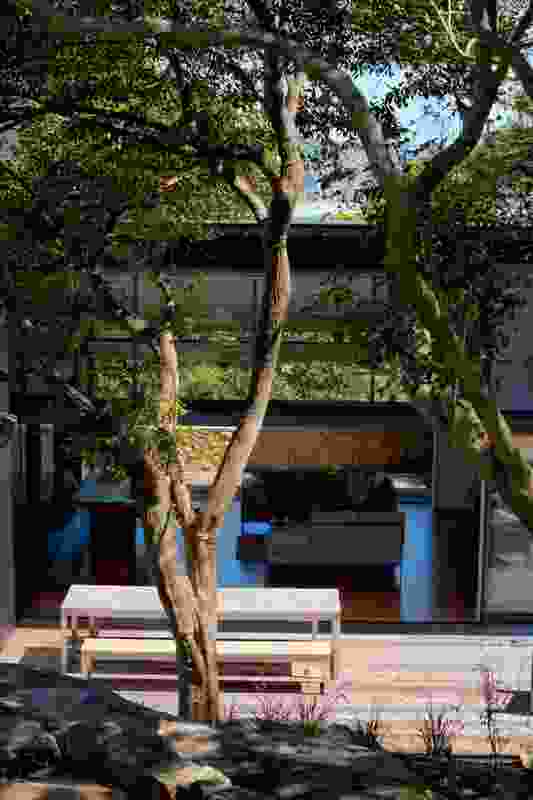 The central living space is open on both sides. 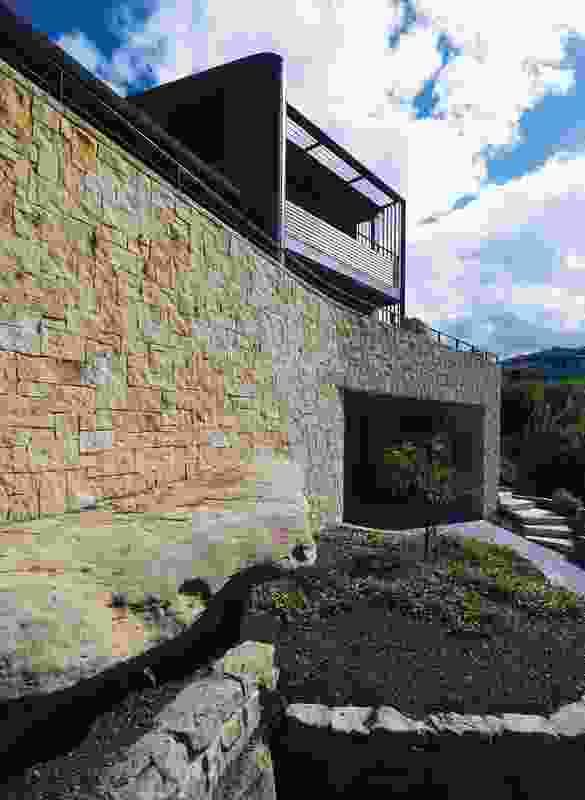 A view of the Shelly Beach House from the street side.