Life on the edge: Shutter House

By peeling off the back wall of the house and opening the interior to a new exterior room, Baber Studio's addition to a Queenslander rejoices in the vibrant tradition of the backyard.

The enclosed outdoor room provides the owner with a new kitchen and deck at the rear of the house.

Anyone who’s ever lived in or visited a Queenslander knows that life happens out the back. While the term “Queenslander” is used loosely and encompasses a wide range of design elements, for homes both grand and humble, over a century of construction in Queensland and northern New South Wales, there are recognizable common attributes. In Brisbane, city council development codes fiercely protect the Queenslanders’ prim and decorative street presence, often consisting of a front verandah and central door. The internal central hall is usually flanked both sides by symmetric rooms that serve as living and bedrooms, while out the back thrums the hearth of kitchen, bathroom and eating areas, often occupying enclosed sections of verandahs. This throb of activity continues into the backyards, where chook pens, water tanks, clotheslines, vegetable patches and any number of sheds and lean-tos define the owners’ preoccupations.

In many of Brisbane’s older suburbs, protected Queenslanders have endured numerous renovations to adapt to modern life. Baber Studio’s Shutter House renovation in Brisbane’s inner south adopts a thoughtful approach to the language of screening and verandahs, while maintaining the integrity of the original home’s modest proportions. Husband-and-wife design team Kim and Monique Baber was commissioned to provide the owner with a new kitchen and deck at the rear of the house, protected from the fierce western sun while embracing views to Mount Coot-tha and the western ranges.

As Kim notes, “It is interesting that the character code is fixated on maintaining street appearance but is largely silent about what happens to the rear of the house, prioritizing the nostalgia of cottage ‘faces’ all nicely made up, while renovations are permitted to go gangbusters at the back of the house.” Many a grand “entertaining” deck has been grafted to the backs of these homes, looking, according to Kim, a bit like “elevated tennis courts.” Shutter House, circa 1920, sits on a small three-hundred-square-metre site, closely wedged against neighbours on either side, enjoying aerial views into a magnificent stretch of backyard vegetable patches and eclectic sheds.

Baber Studio peeled off the back wall of the house, opening the interior to a new exterior room. The hybrid space is demarcated by its floor of narrow, pencil-rounded blackbutt boards abutting the original wide pine flooring, with infilled gaps to protect new interior rooms below. The new verandah has a carapace of operable shutter windows that provide shelter from sun, rain, wind or neighbours’ eyes as desired. The modulation and fine-tuning of the openings are strengthened by the geometry of the verandah’s periphery: a jagged coastline of vertical timber and closed-cell polycarbonate strips, sans overhangs, that allows the occupants to take in the views from the very edge of the deck floor at orchestrated moments.

Working on the principle that the edges of the deck are where people like to be, Baber Studio has dispensed with the need for greater floor space and heightened the impact and usefulness of the edge. From these angled platforms and pointed poop decks that create a subtle pelorus, one’s eyes are directed to the near and distant views, and at night to the starry skies. A series of bench seats along the edges also allows for occupation at optimal points next to openings. The generosity of the viewing platform is significant, given that only half a metre of extra space has been consumed by the new plan.

The timber casing of fast-silvering Western red cedar boards continues a common local language of extensions and outhouses. Part of that lexicon is the exterior staircase, wrapped in battens or lattice that often continues as a petticoat for undercroft spaces between timber stumps. Here Kim has incorporated the would-be exterior staircase into the interior, with a system of casement windows set into exposed studs of the external wall, and a delightful window seat nest hovering over.

Opposite, the new kitchen also occupies verandah territory, although its highly crafted joinery components and smooth brush box timbers give a contrasting feel of interior comfort. A skylight punctures the ceiling above the bulkhead, where a panel of salmon pink paint refracts warmly coloured light around the space. A bathroom skylight also has the owners bathing in sunlight. In addition to the openings at the back of the house, a picture window above the kitchen sink and an adjacent casement opening offer further communication with neighbours in this social locale.

“The clients are very social with their neighbours,” says Kim. “The shutters and openings allow them to holler out to them.” Perhaps one of the most valuable traits of Brisbane cottage settlement, Kim suggests, is this “contiguous tract of informal backyards where boundaries quickly become amorphous in Brisbane’s jungle-like growth.”

Other
Custom brushbox seat built by Darra Joinery with upholstery by Kiss Upholstery in fabric by Warwick Fabrics.

Life on the edge: Shutter House 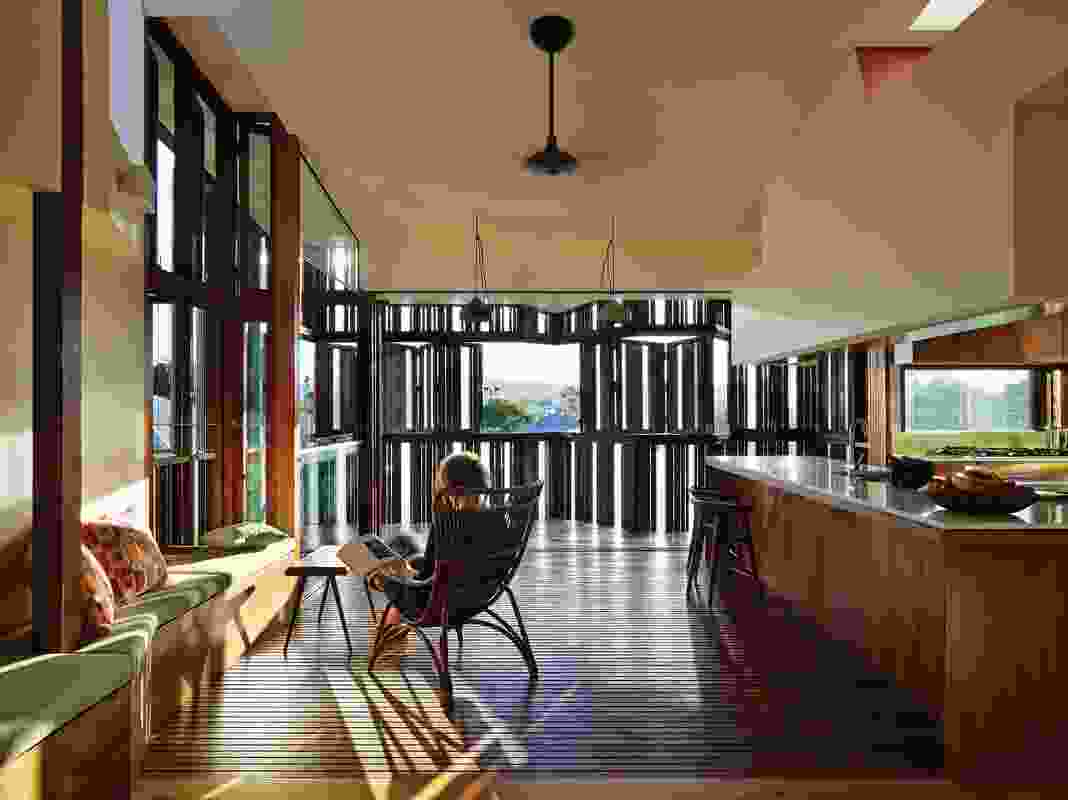 The enclosed outdoor room provides the owner with a new kitchen and deck at the rear of the house. 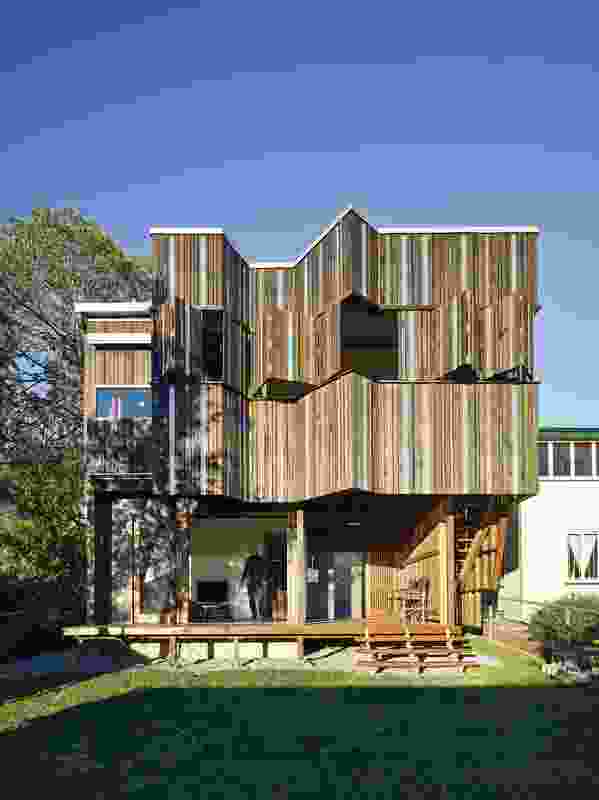 The new work embraces the Queenslander tradition where life happens out the back. 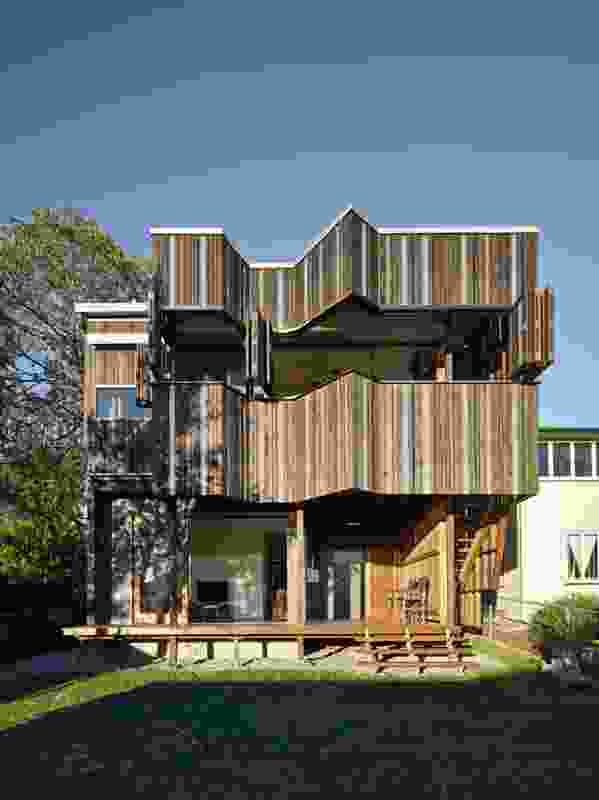 The new verandah has a carapace of operable shutter windows that provide shelter from sun, rain, wind or neighbours’ eyes as desired. 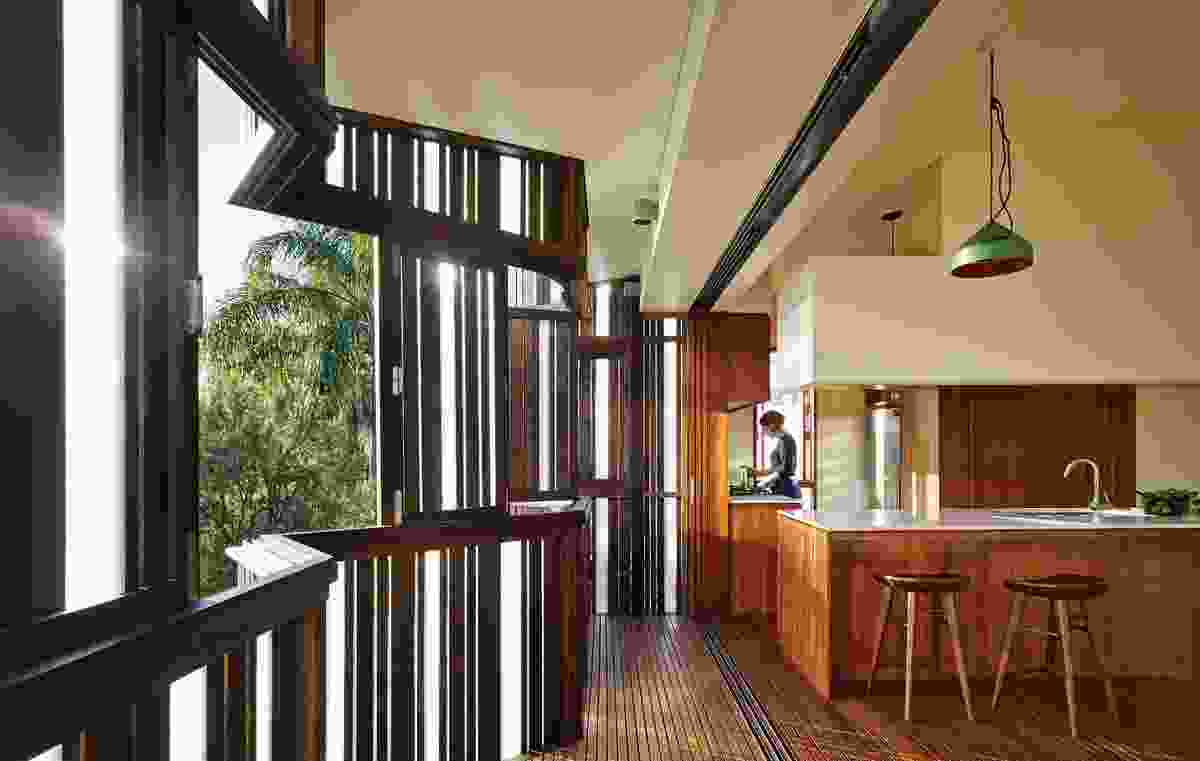 Angled platforms and directed views heighten the impact and role of the edge. 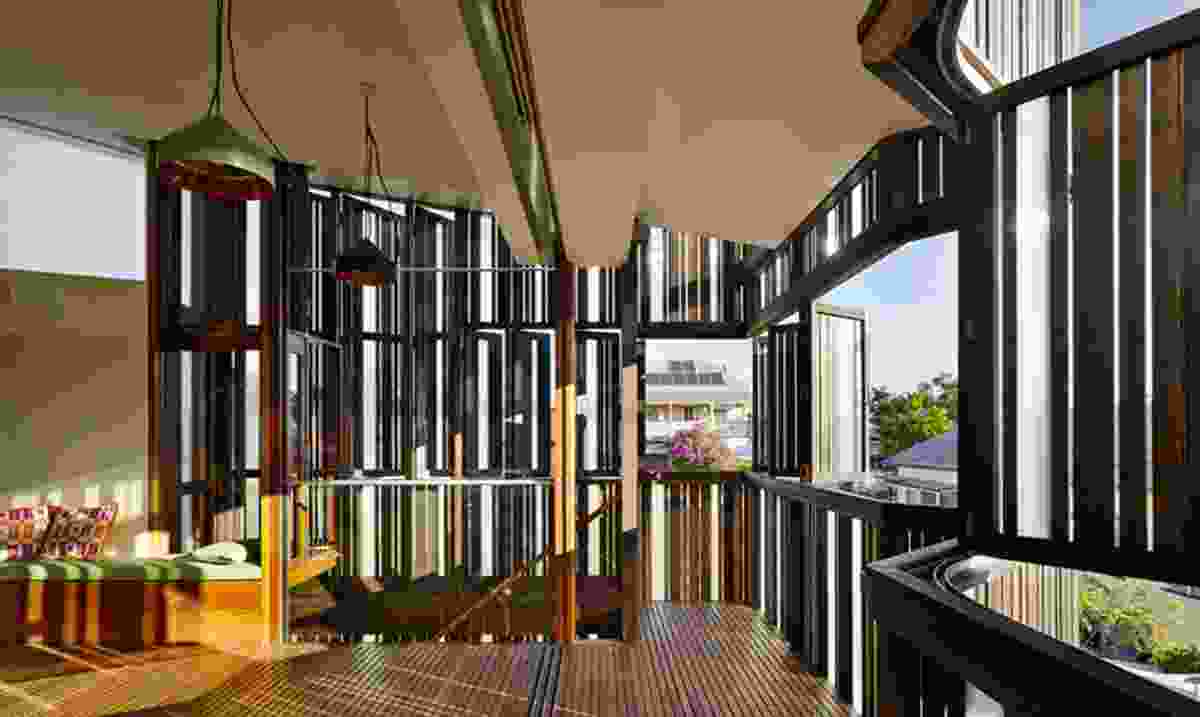 Bench seats are placed next to openings for maximum enjoyment of the edge. 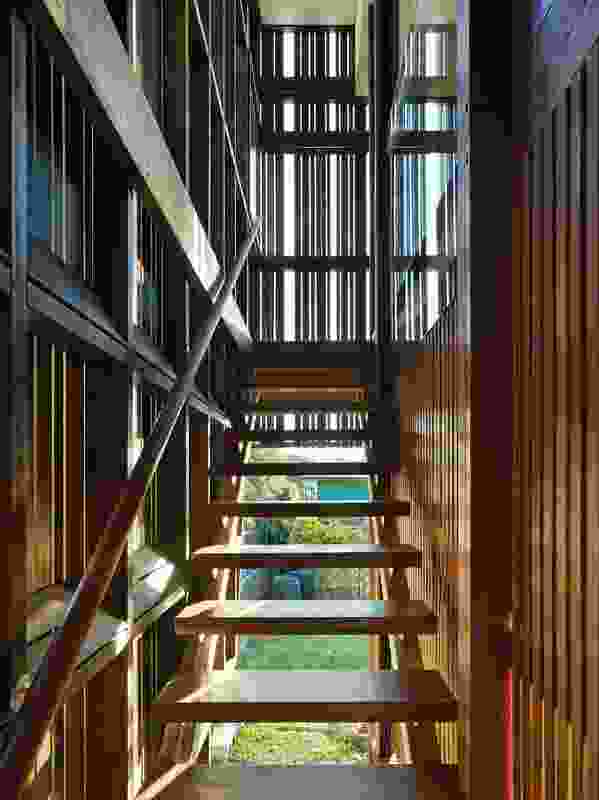 The traditional exterior staircase has here been incorporated into the interior space. 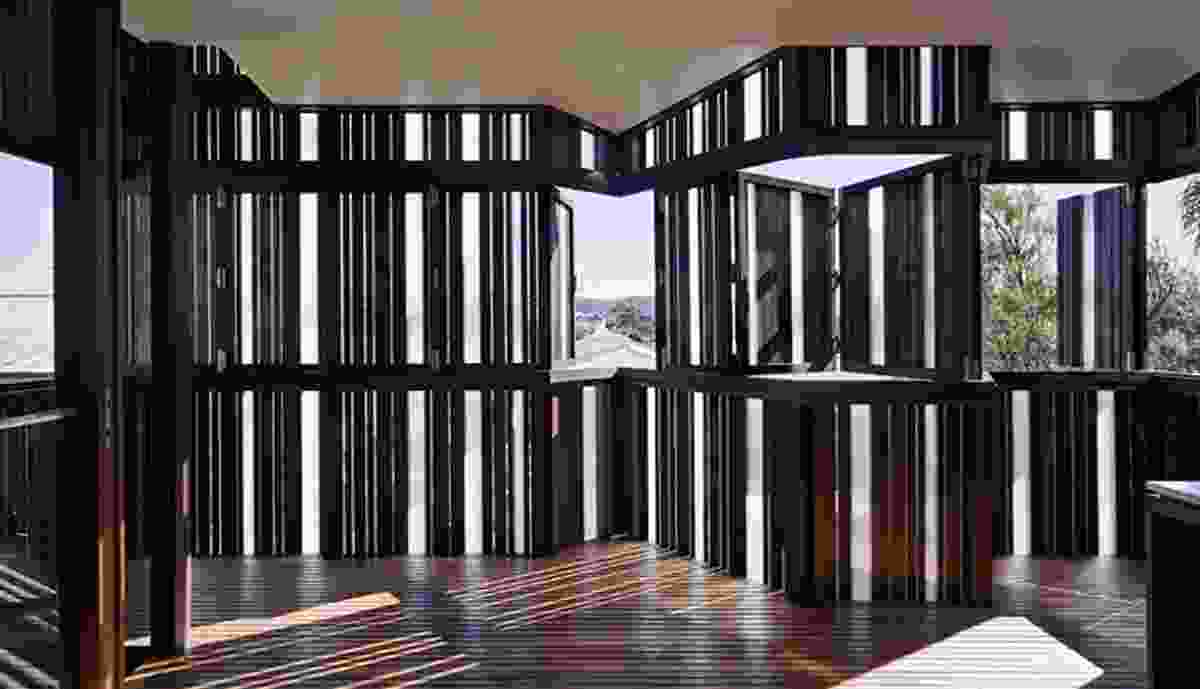 The modulation and fine-tuning of the openings are strengthened by the geometry of the verandah’s periphery. 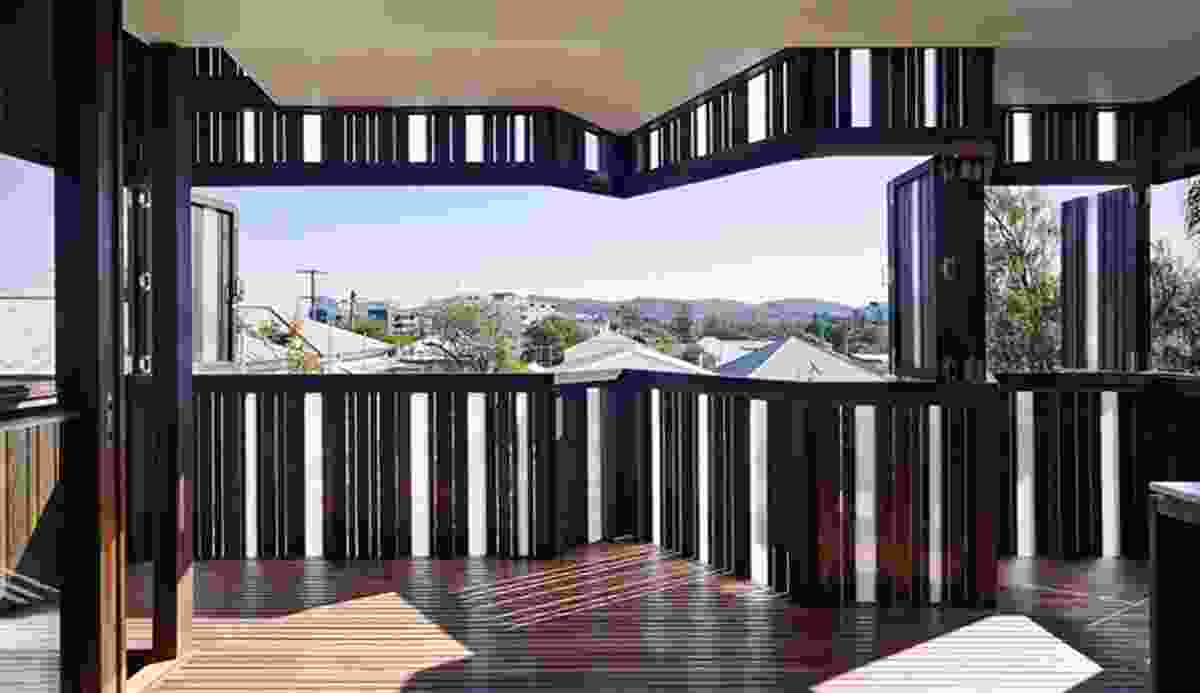 Protected from the western sun, the kitchen and deck look out to Mount Coot-tha and the western ranges. 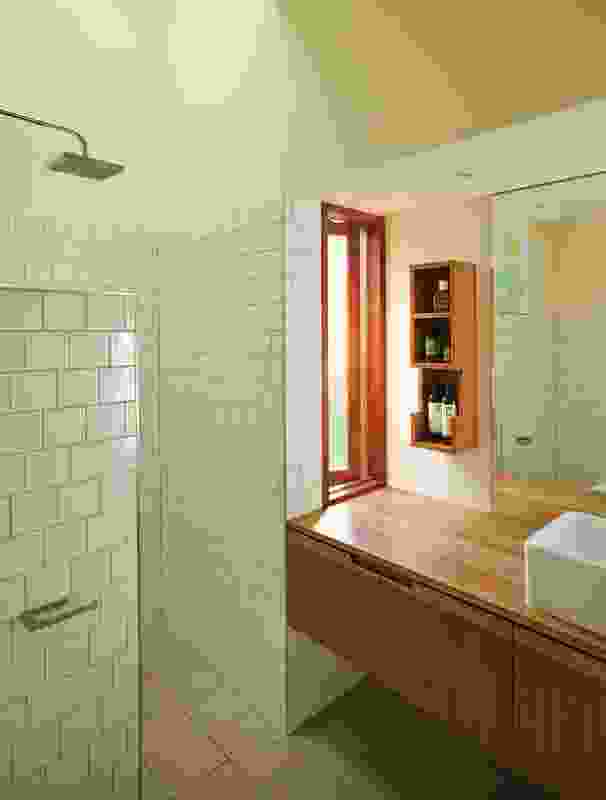 A bathroom skylight allows the owners to bathe in the warmth of natural light. 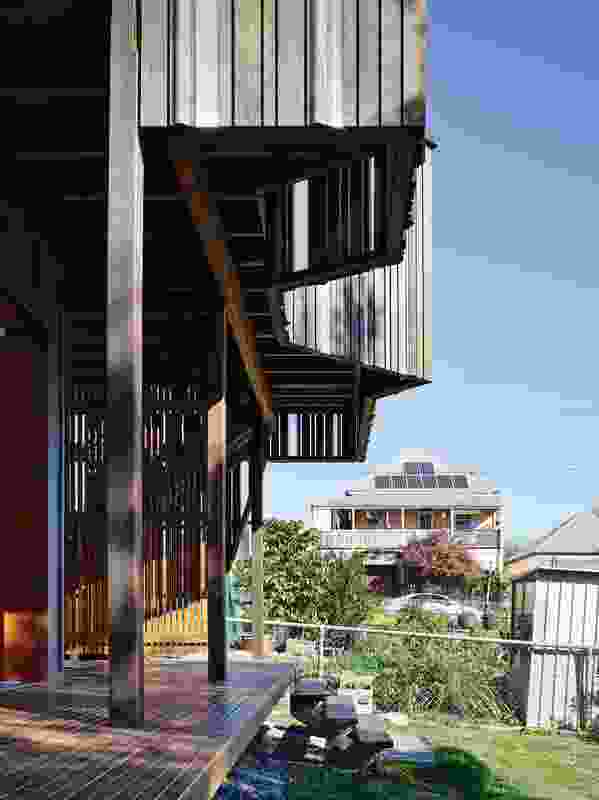 Although the new space is generous, only half a metre has been added to the original footprint.