Let there be light: Skylight House

The easeful simplicity of the addition to a 1930s house in Sydney’s North Shore by Andrew Burges Architects belies its painstakingly refined detailing and subtle spatial manipulation.

Skylight windows angled toward the south-east allow subtle daylight to fall into the new living spaces.

After visiting several projects by Andrew Burges, one becomes accustomed to the fact that his alterations and additions projects are generally invisible from the street. Skylight House, a comfortable 1930s home in the upper North Shore Sydney suburb of Lindfield, looks just like any other in the neighbourhood from its quiet, leafy street.

This has become one of Andrew’s trademarks – he and his team work with a quiet modesty, at a range of scales, often on humble things, to make them beautiful. He celebrates what he finds in an existing building and is extremely respectful of generic, often unloved, standard housing stock.

At Skylight House, the work done to the original dwelling involves only a subtle reorganization, with new bathrooms replacing an old corridor and a clearer front–back transparency established. The new wing sits behind the original house and extends a previous iteration of a small kitchen/family room. The new kitchen/eating/family room spreads wide but is only four metres deep, allowing a covered outdoor area between the indoor space and the equally wide, but not deep, garden. The garden is up two steps from the rear deck and the lawn meets windows at each end of the house. This deft move gives a flat lawn that is brimming at the windowsills, so that the garden feels very much a part of the house.

The new rooms have a roof tucked behind the main roof – it has a beautiful simplicity and fine edge/gutter details visible from the garden. By setting up a parallel slope to the rear of the main roof, Andrew allows daylight to fall into the new space through skylight windows. The sloping white ceilings are light and playful above a datum of raw materials. Below that datum, cupboards are timber, or black melamine with ply trim, modestly made but extremely effective. The extent of built-in furniture gives a control and uniformity to the rich messiness of family life.

This subtle control over light and material is a skill that Andrew has honed in recent years. When asked about the beauty of the raw materials in Skylight House, he admits that he realized he likes his sites most about 75 percent of the way through the project. He talked of the joy of seeing external construction materials beautifully assembled to make a shell, and then the sadness of those being covered over internally by linings. He therefore set about making a project in which the outside materials at times became the inside materials.

A lot of effort has gone into concealing the complexity of the house’s components, to make the main informal living space seem simpler than it is. Complex layers of timber louvres, windows and other screens on the rear elevation seamlessly disappear into cavities so that in summer the blurring of inside/outside lines is so acute as to make the rear elevation seem like a rudimentary garden structure. Andrew worries about the small details – how the main bedroom will have three types of timber (floor, windows, cupboards, wall panels) – and seeks to resolve these. He plays carefully with wardrobes in the old rooms, setting them to a picture rail height rather than full height (which would disturb the original cornice details).

In 2004, when I first met Andrew, Sydney projects were usually grander and more attention-seeking in presentation. His team, then in a large collective office, eschewed glamour and drama and seemed to work hard, with a certain solemnity. He was very much ahead of his time.

In a jury visit to one of Andrew’s projects in 2009 for the Australian Institute of Architects’ New South Wales Chapter awards, jurors were given sets of working drawings that were incredibly detailed, and care and love were evident in the modest finished project. He has always joked that his level of detail has been his vice, the reason he “never makes money.”

Andrew loves the challenge of matching budgets (rather than pushing for larger ones) and he is candid about how budget restrictions make a project stronger. His work in Sydney is not unlike the similarly fine work of Owen and Vokes and Peters in Queensland. His care for detail allows an ease of living, an informality and a robustness that many architects find hard to achieve.

One feels optimistic about the profound effects such a rich and relaxed environment will have on the four children growing up in the house. We joke that Andrew will be to blame when the children grow up to become architects, spending their modest profit margins on beautiful 1:10 corner details rather than holidays or fast cars. But at least they will have spent their teens in a beautiful, simple house, with history and modernity intertwined, hopefully emerging into adulthood with a passion for design and a feeling for how they too can contribute to shaping their surroundings.

Skylight House by Andrew Burges Architects is a winner of the 2014 Houses Award: House Alteration and Addition over 200 m².

Let there be light: Skylight House 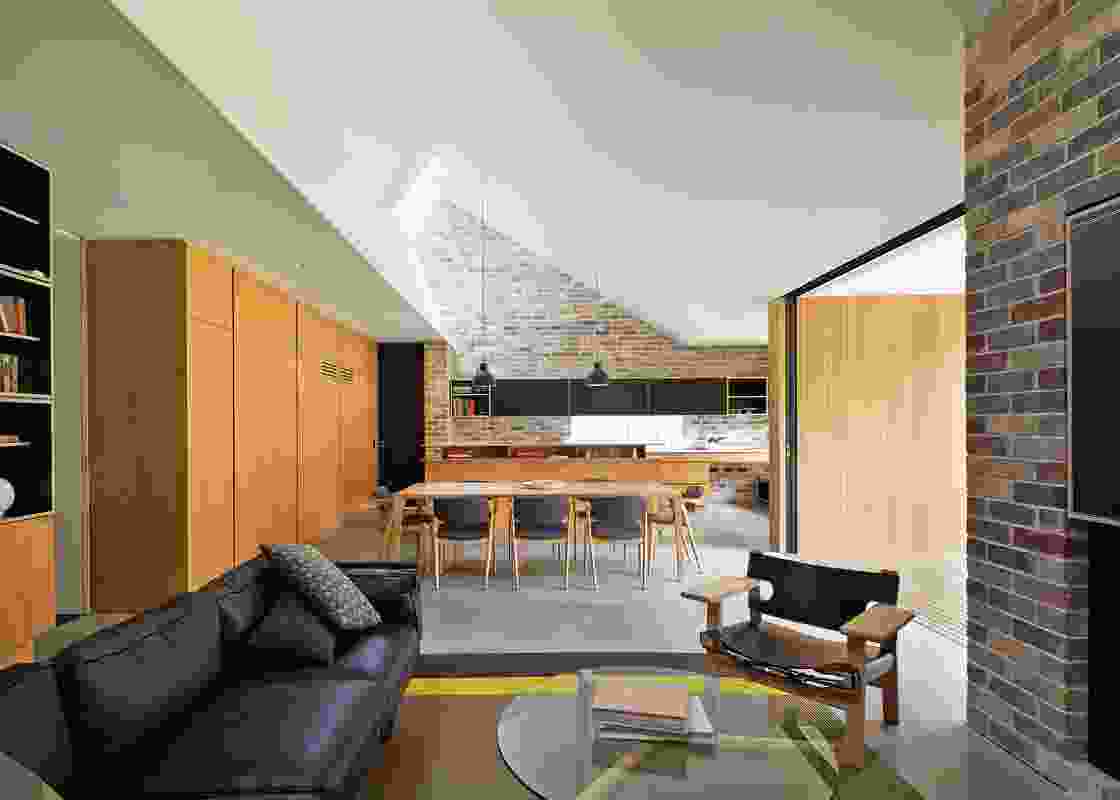 Skylight windows angled toward the south-east allow subtle daylight to fall into the new living spaces. 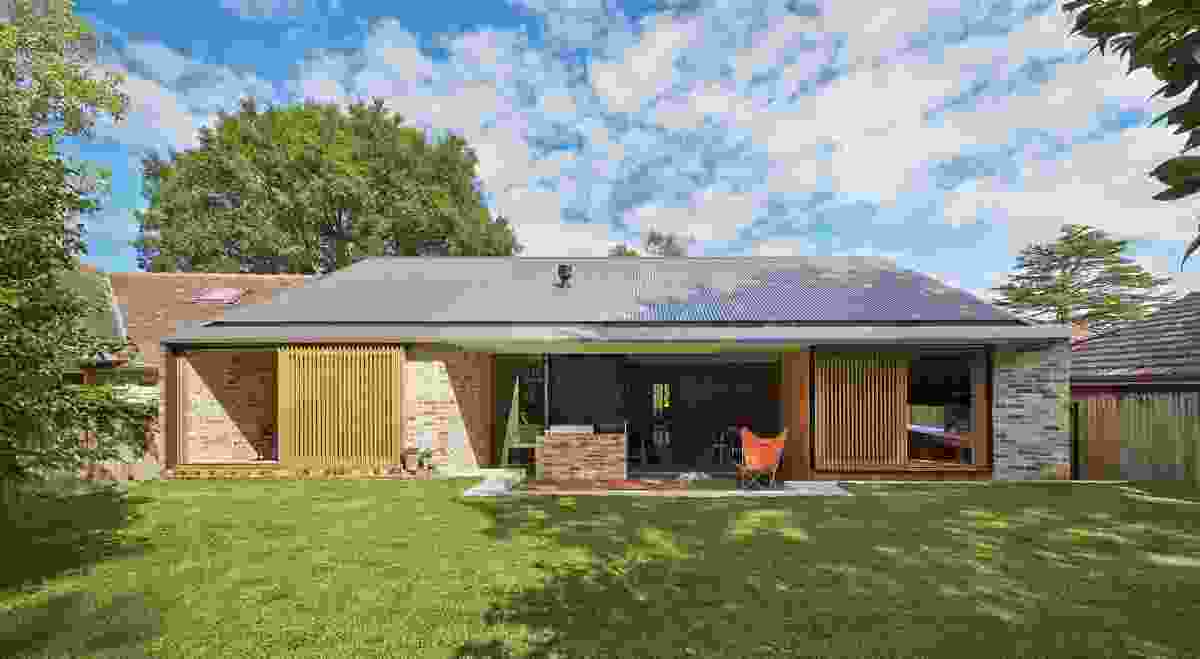 The house’s modestly scaled, low-slung form allows it to fit comfortably into its suburban setting. 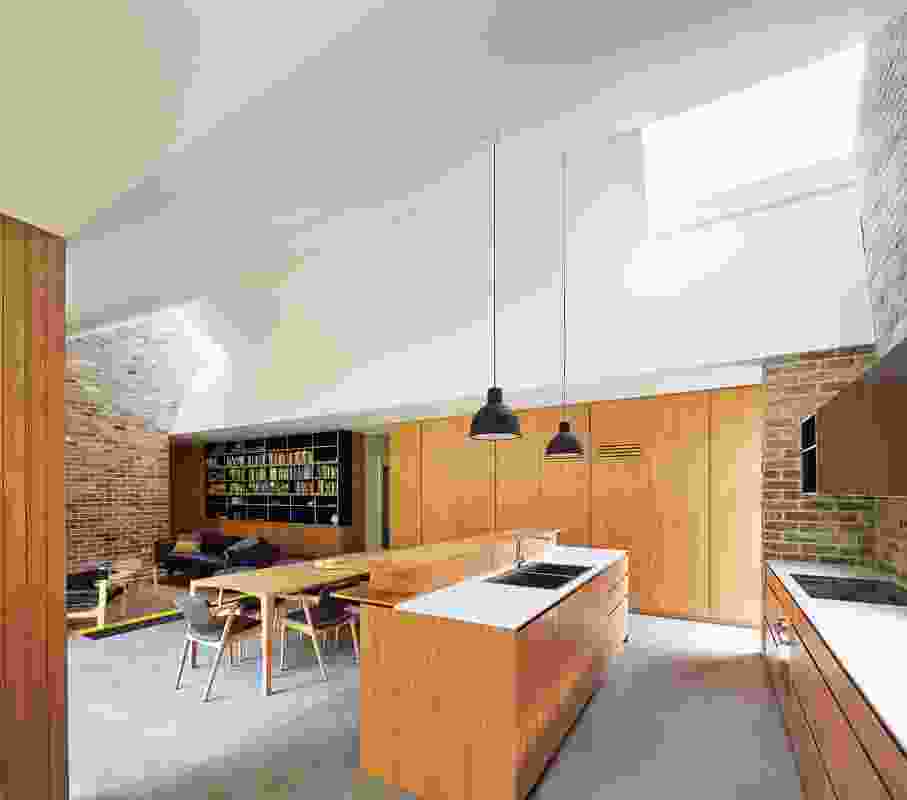 A robust yet refined materials palette lends the interior a sense of elegantly casual domesticity. 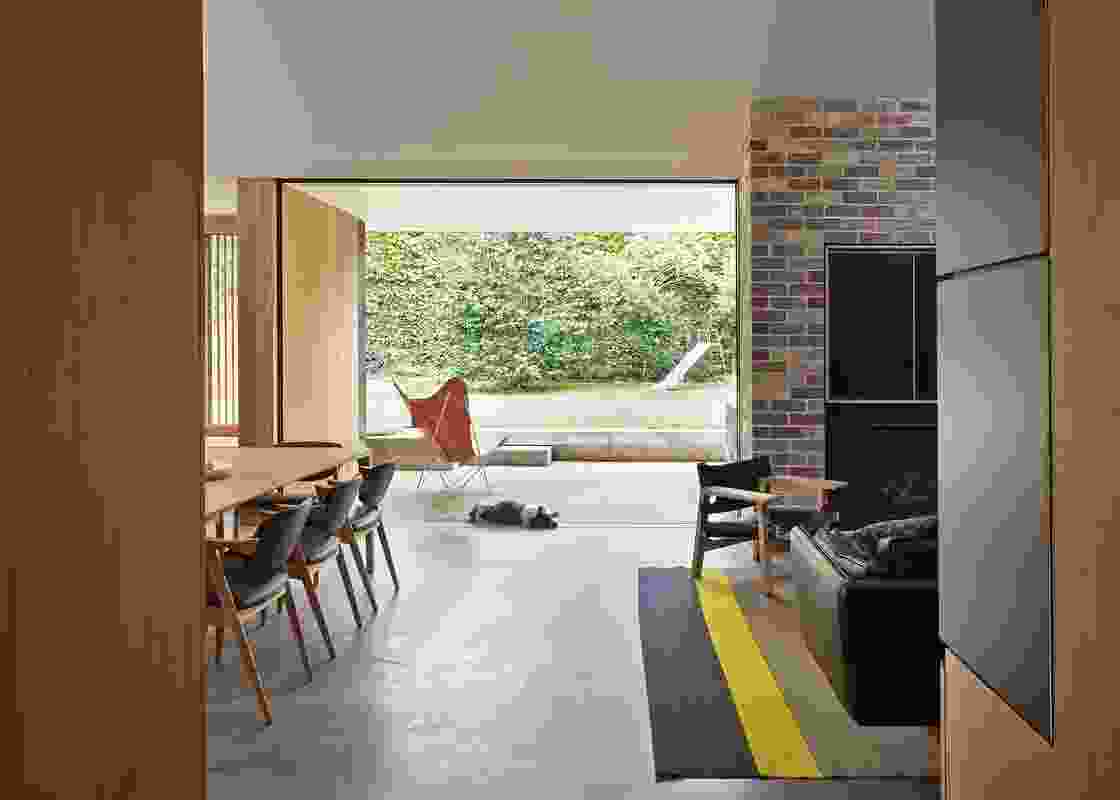 An expansive covered outdoor area sits between the wide rear garden and the living area. 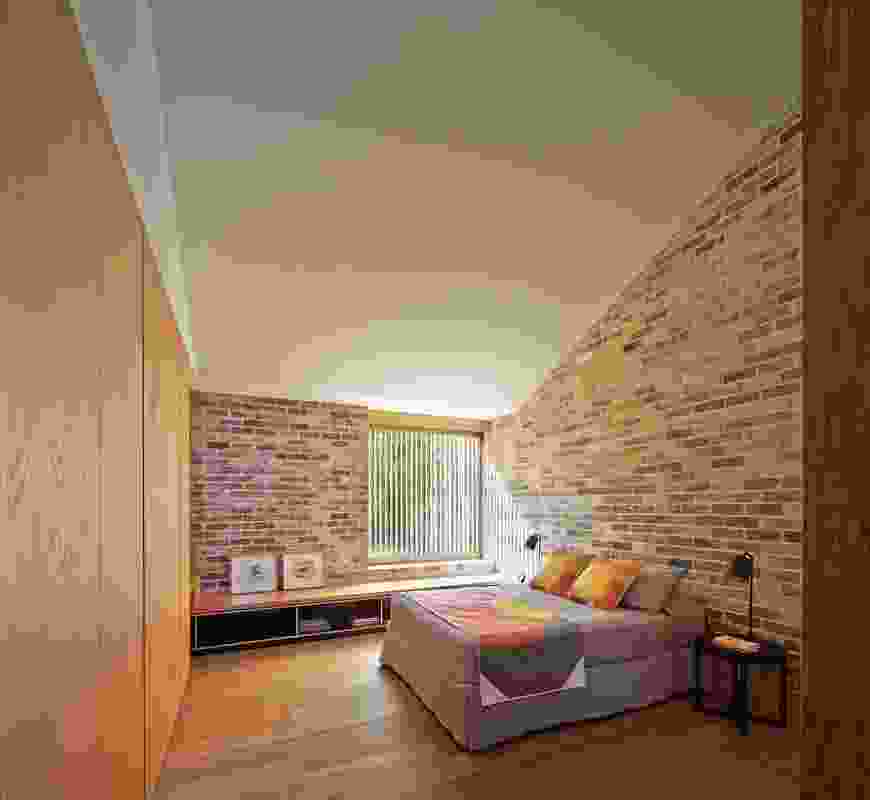 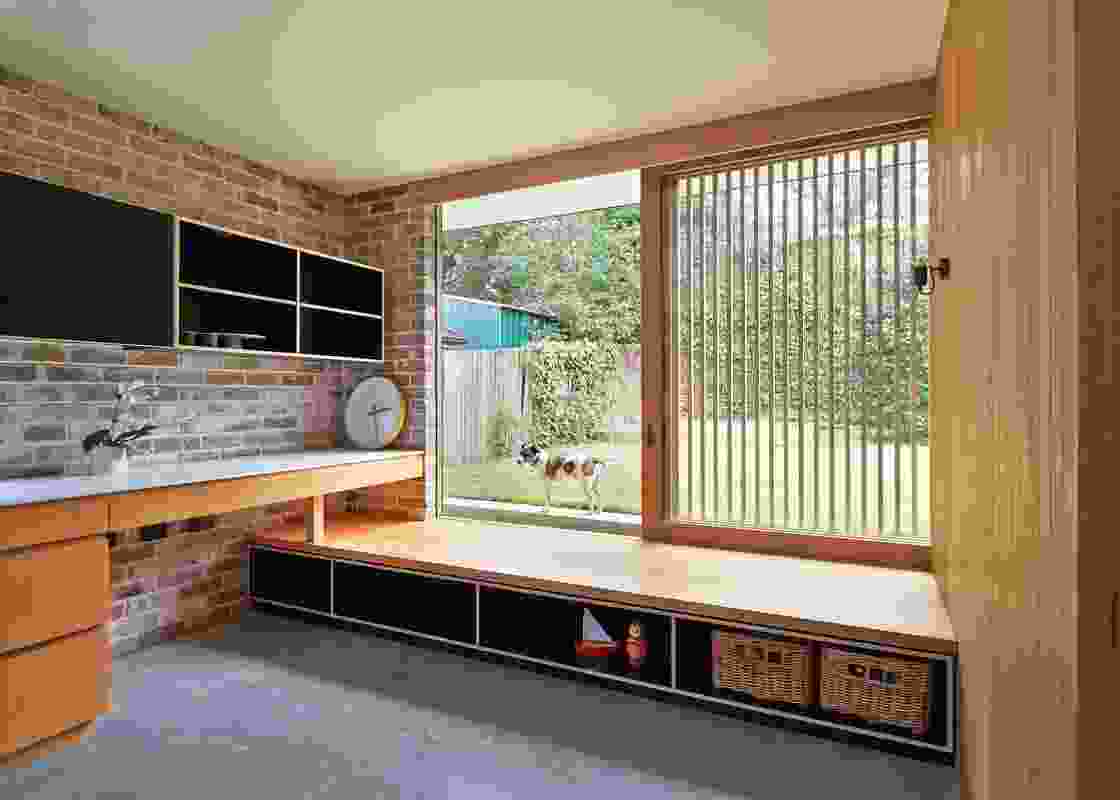 Built-in furniture gives a control and uniformity to the rich messiness of family life. 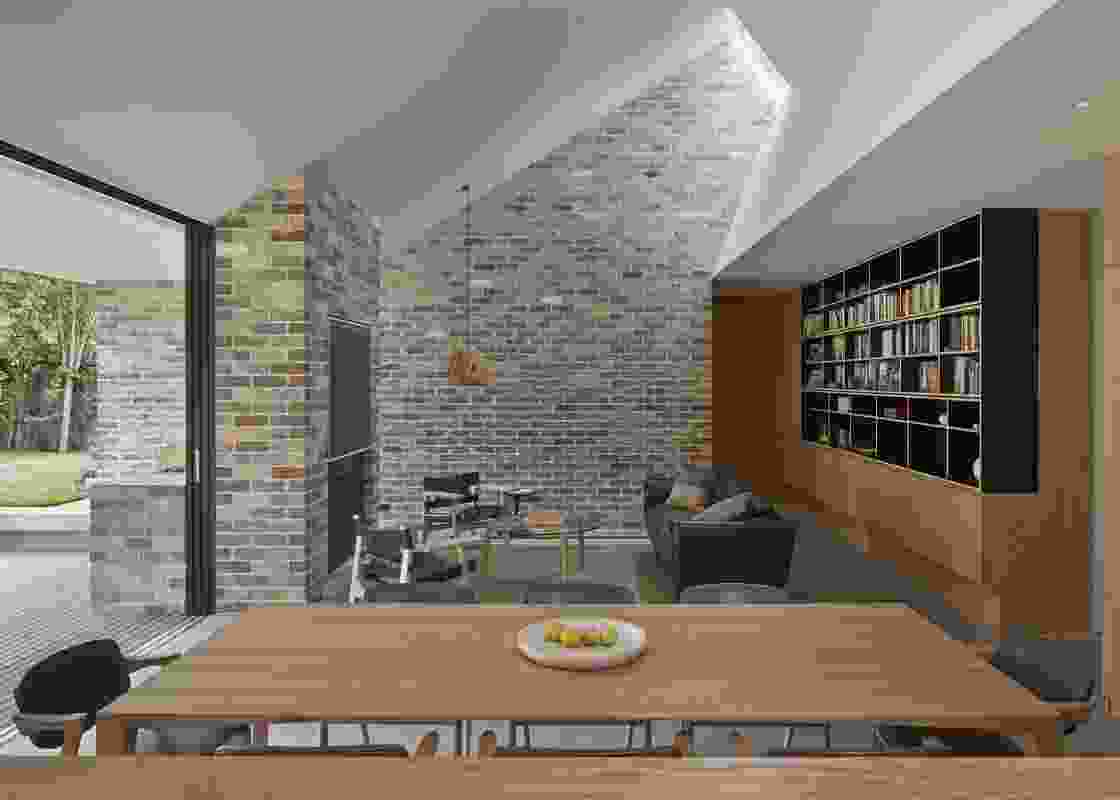 A lot of effort has gone into concealing the complexity of the house’s components, to make the main informal living space seem simpler than it is. 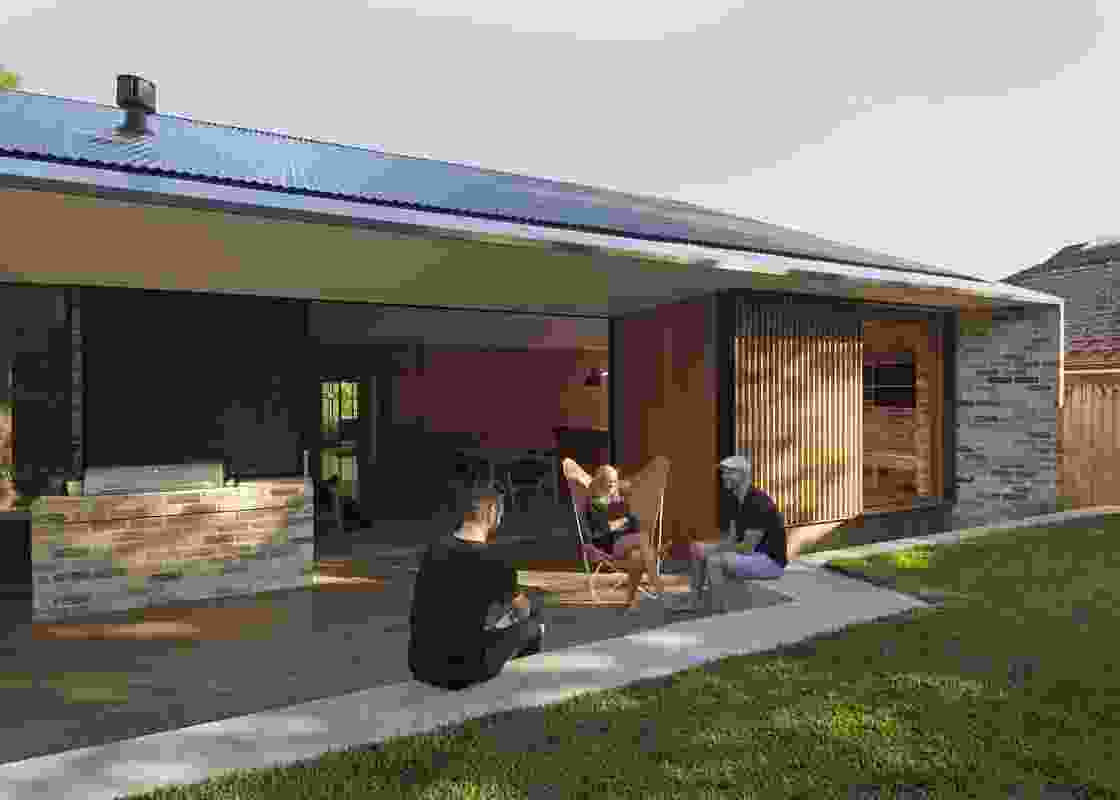 The garden is up two steps from the rear deck and the lawn meets windows at each end of the house. This deft move makes the garden feels very much a part of the house. 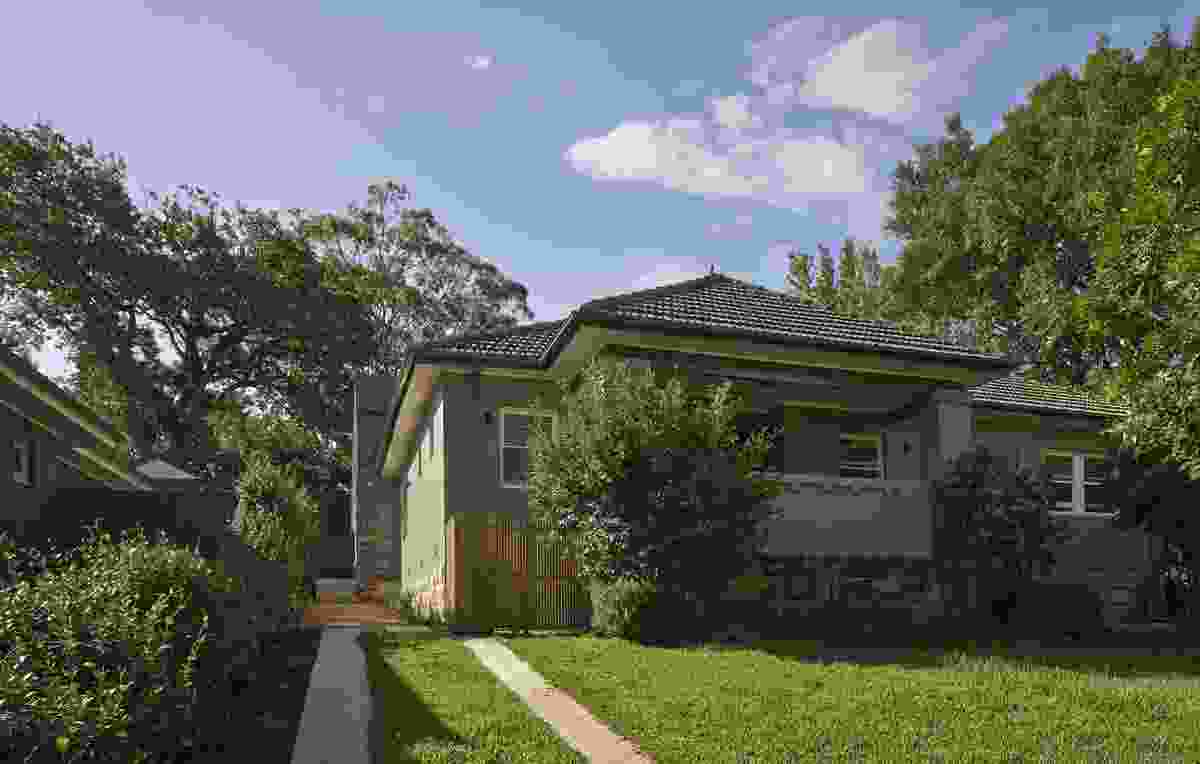 From its quiet, leafy street, the Skylight House looks just like any other comfortable 1930s home in the upper North Shore Sydney suburb of Lindfield.