Taking a neighbourly approach to design and construction, this addition to one in a pair of historic attached cottages by Archisoul in beachside Sydney preserves a connection to Australia’s coast-dwelling past.

All buildings have a story to tell: the story of the lives of the people that have interacted with them and the story of their place. Archisoul Architects was entrusted with reimagining and restoring two unassuming timber-clad cottages in Manly that occupy a unique place in the area’s history and in the story of Australia’s beach culture.

In the last decade of the nineteenth century, the Sly brothers, a couple of local fishermen, built the pair of semi-detached cottages, which sit close to Manly beach. From the rear of these houses they would take their boat to the nearby beaches and patrol the waters, in what some historians see as the establishment of surf lifesaving in Australia. With a story such as this that goes to the heart of Australian beach culture, there is little wonder these two humble cottages were deemed to be of high heritage value.

In addition to the heritage importance, the project also dealt with an unusual, but effective, client arrangement that generated almost as many stories as the building’s past. One of the owners of the cottages asked Archisoul to take on the renovations. After initial contact with the council, it was recommended that both cottages should be tackled as one project. This was not as easy as it sounds, as the owner of the adjoining cottage lived 16,000 kilometres away in continental Europe. Nonetheless, when contacted, the jetsetting neighbour was more than happy to collaborate in the rebuilding of the cottages and the result is an Australian beachside home in the spirit of European sophistication and comfort.

The first challenge the architects faced was the variance in the briefs, budgets and timeframes of the two separate clients. While the fronts of the cottages were given the same aesthetic treatment, that’s where the similarities ended. Jo Gillies, principal and director of Archisoul, says the project was “two different houses that share a common wall.” There were complex negotiations between the design team and the two clients in order to agree on an aesthetic strategy for the common aspects of the project. A strong juxtaposition between the old and new was used as a way of “honouring the past and defining the new,” and this is no more evident than in the southern cottage, where its small site and long, south-facing facade called for some clever architectural interventions to overcome the limitations.

The first tactic was to retain and reuse as much heritage material as possible in the existing cottage. All the timber floors were retained, and timber wall panelling was restored along with the ornate pressed metal ceilings. A clear delineation between the existing cottage and the new addition is made with sand-coloured polished concrete flooring. This, along with the warm tones of the plywood ceiling, give the space a beach-like feel. Bricks reused from a demolished chimney extend the original ground-floor fireplace to the first floor, connecting the two levels and offering a textural feature in the new living space, which is otherwise smooth and slick.

Over the dining area, a glass ceiling forms the floor of the upstairs study and allows light to pour into the downstairs space. Far from being dark and pokey, the central section of the house is dramatic and open. The client wanted people to “look up” when they entered the new section of the house and the glass connection allows for this to happen.

The kitchen island acts as a mediating device between the dining area and the living area, which connects out to the back courtyard. The whole of the ground floor can be opened up or screened off, and the polished concrete floors have in-slab heating, ensuring year-round comfort and flexibility. In general, the colour palette is conceived as “timeless and flexible” – nuanced neutrals of white and sand are contrasted with black, grey and brass accents.

Despite the proximity to the neighbours and the southerly aspect, the upstairs rooms are light-filled and private. Screening devices and windows have been carefully positioned to maximize light and minimize overlooking. The soft palette is continued on the upper levels, with oak flooring in the bedrooms and plywood ceilings. Clerestory windows from the internal bathrooms borrow light from the glazed study space, ensuring that they too are well lit from multiple directions. 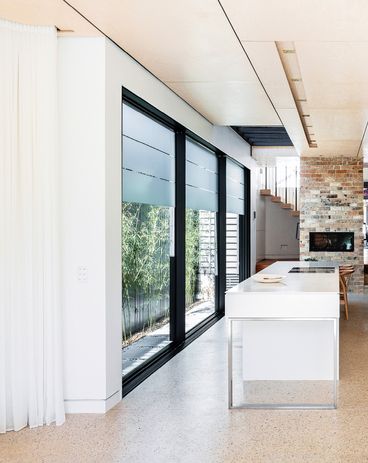 This project by Archisoul is an interesting lesson in collaboration. Skill and experience have delivered satisfaction to both clients and their differing needs, as well as allowing for these heritage structures to accumulate the stories of a new generation of occupants. 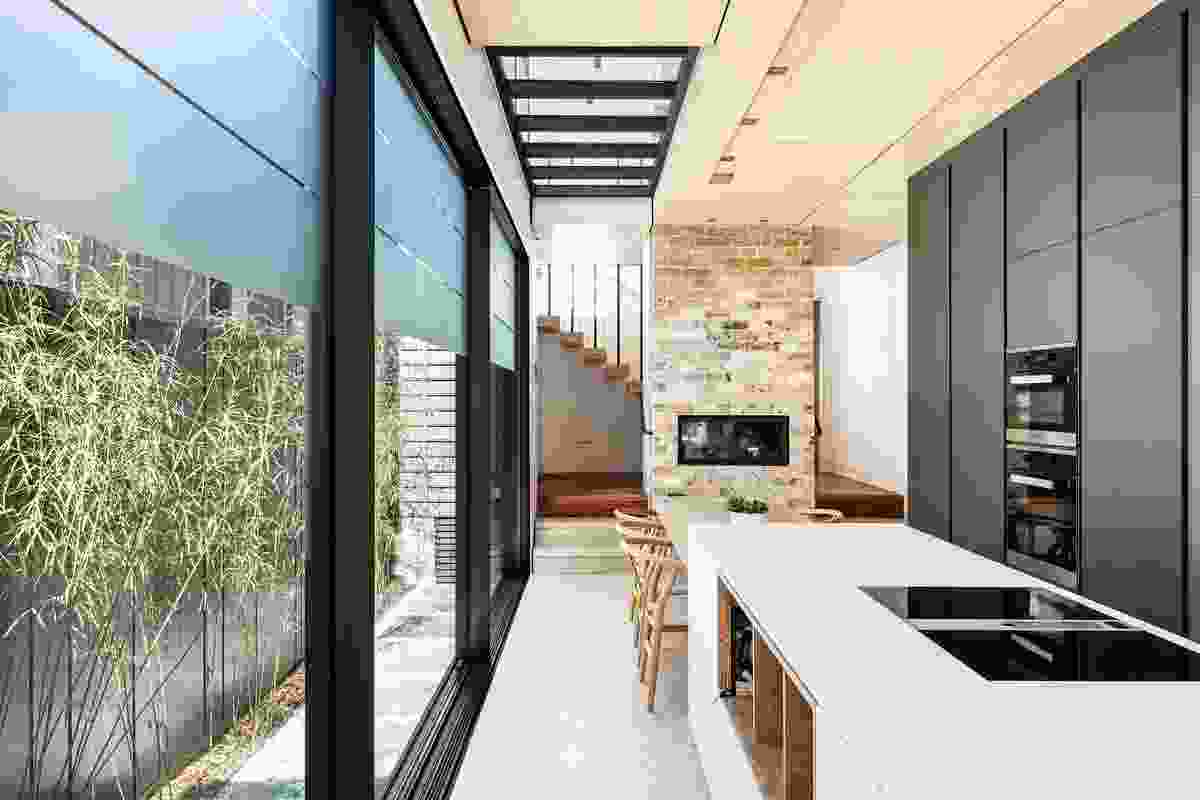 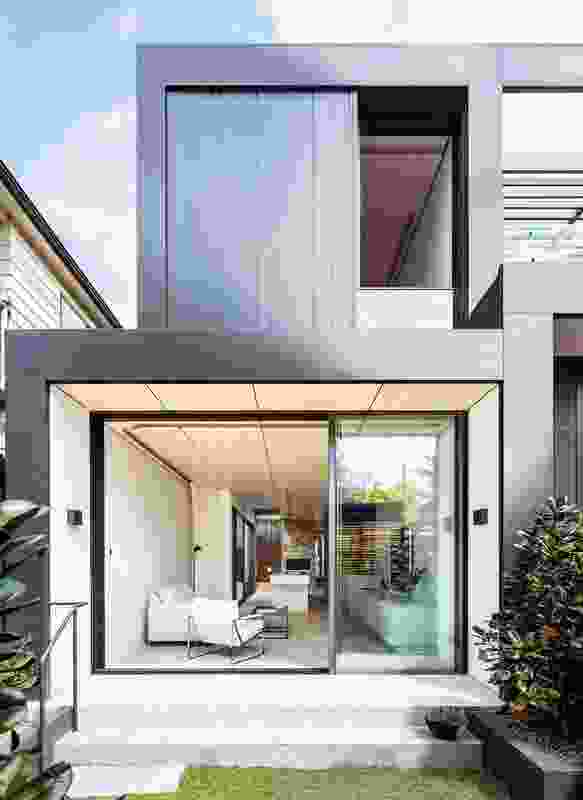 Recessed rear windows and doors provide privacy from the neighbouring cottage to the north. Reclaimed bricks from the existing cottage act as a connecting element between levels. 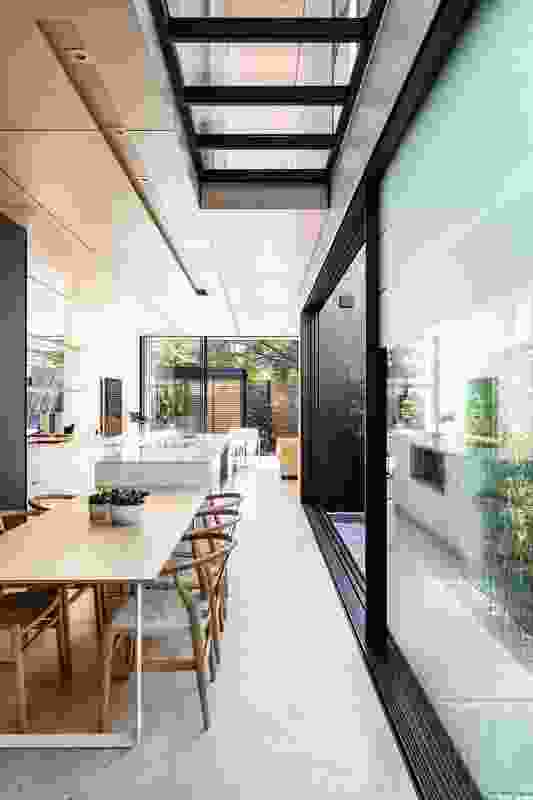 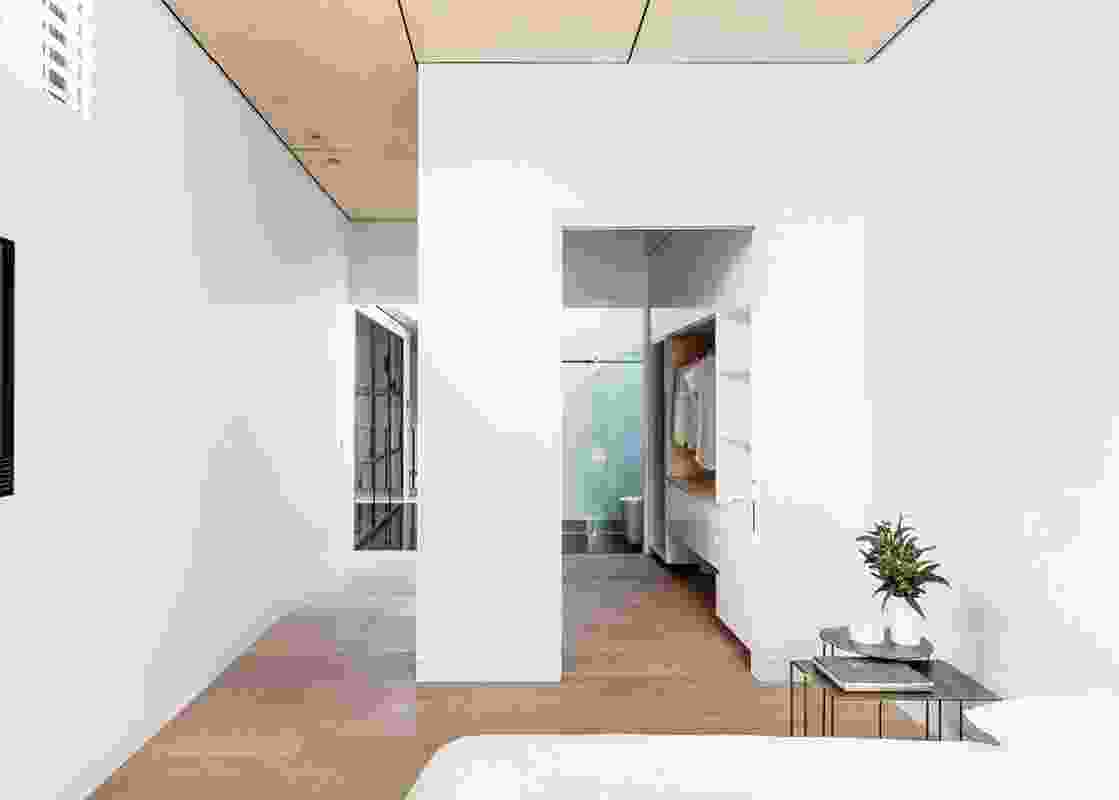 Warm plywood ceilings add to the “sandy” palette, in keeping with the beachside location. 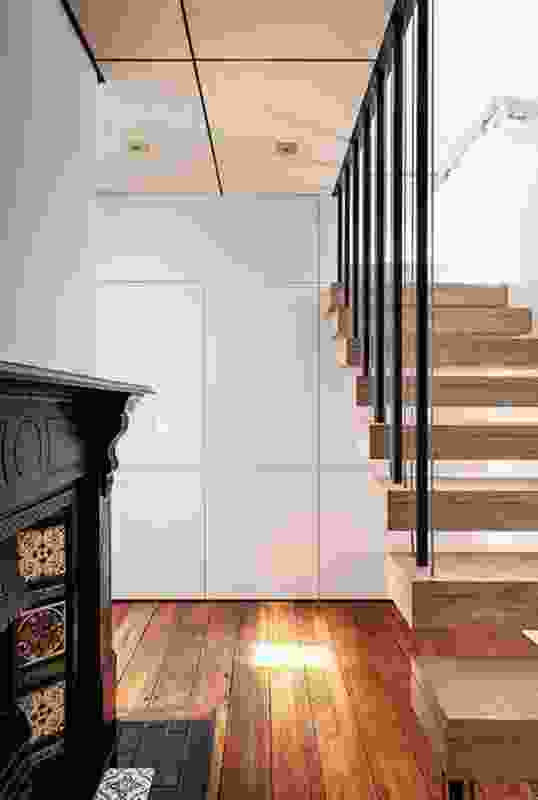 Original elements have been retained to preserve the period character of the existing house.

A change in material signals the line between the heritage cottage and the new living spaces. 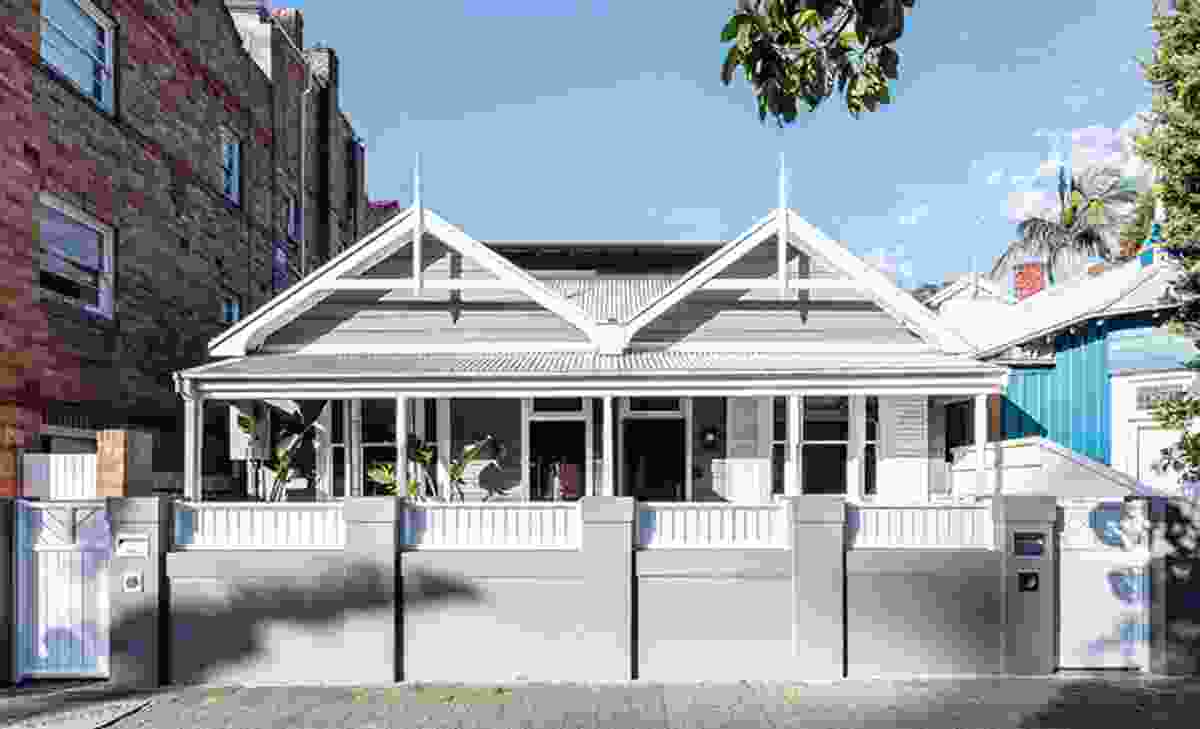 Design and refurbishment of the neighbouring cottages took place simultaneously.