A respectful reworking of an existing house, this project by O'Connor and Houle Architecture + Environments blends old and new architectural elements imperceptibly to create a cohesive whole.

In deference to the architecture of the existing building, the extension of the bedroom wing, seen here at right, continues the pitch of the old roof.

A short stroll from the beaches of Sorrento on Victoria’s Mornington Peninsula, Stephen O’Connor, one half of O’Connor and Houle Architecture and Environments, introduces Sorrento House with the line, “We didn’t have to do much, just make sure you could see the site.” This humble statement speaks volumes for the approach taken by the architects in reworking this existing home, which is tucked away in an incredibly picturesque pocket of grassy dune landscape and was originally designed some twenty years ago by fellow Melbourne practice Williams Boag Architects.

The initial brief to the new architects called for an additional dwelling, which would be located elsewhere on the site and provide the clients, a semi-retired couple, with a retreat when family descended over holiday periods. However, as the brief evolved, minor works to the existing home grew until it became evident that it needed a few major tweaks to allow it to handle the increased load. This, and the realization by the clients that they didn’t want to be banished to the garden for two or three weeks every year, shifted the focus back to the existing dwelling.

Stephen notes several times as we walk through the project that there was much about the home the clients loved, and best efforts were made to remain deferential to the original design. In particular, the defining gesture of the singular sloping roof plane was cherished and when the long bedroom wing was extended south by several metres to double the size of the main bedroom, the pitch of the roof was retained. Easily the biggest modification to the home was the flipping of the living areas. Previously the kitchen and dining area occupied the southern half of the open plan. O’Connor and Houle has relocated this to the north, tucking the kitchen space into the most intimate corner of the room, while positioning the lounge area under the lofty raked ceiling at the other end. The counterbalance to this shift was the introduction of a plank-formed in-situ concrete wall that Stephen notes “provides some added weight to balance all the height and glass.” Stephen outlines the lengths the architects went to in getting this wall right, from the meticulous planning of the integrated fireplace and services to the on-site selection of specific formwork planks of Oregon timber to ensure they would give the right level of texture. This effort is rewarded; the new wall anchors the space while adding a level of tactility, a pleasing contrast to the smooth banks of glass and plasterboard.

Another significant modification is in the west wall of the living area, which was previously composed of both solid and glazed sections to alleviate the effect of the west-facing glass. O’Connor and Houle was able to remove all traces of the solid wall, thanks in part to advances in glazing technology. This created a completely glazed western edge and dramatically opened the living areas out to the gardens. As a precaution, the architects have also made provision for future connection of automatic external louvres across the deck, should the force of the western sun prove too much for the new glass.

The remainder of the house has largely stayed true to the original, the extended main bedroom representing the only increase in building footprint. The compact proportions of the guest rooms and wet areas along the eastern wing reflect their intermittent use and were retained, albeit with a thorough makeover in O’Connor and Houle’s suite of typically crisp, inventive detailing and palette of warm, clean materials. A study nook along the corridor has been refinished with new joinery, while an original door from the main bedroom out to a small deck has been replaced with a signature element of this practice’s work – the deep, steel-framed bay window. This constantly evolving component of the practice’s repertoire has this time been lined internally with cork, then timber to create a thermal break, a refinement explored during this project that will no doubt be worked over in its next incarnation.

Having previously reviewed other O’Connor and Houle projects and discussed the minutiae of this window design, it was enlightening to hear Stephen elaborate further on how the practice believes this standard element of every home, of every building, can start to develop what is a rather barren, or in Stephen’s words “liberating but empty,” language for modern architecture. Through investigation of the basic elements and an “incremental experimentation,” lessons from each project are used to inform and develop the language of the next. The studio aims to create a kit of “iterations,” intimately understood and implemented critically in the pursuit of an endless refinement. This house, with its pre-existing framework, has proved a happy hunting ground for this kind of activity, and if Mies van der Rohe was right and God is indeed in the details, then this place should be consecrated. 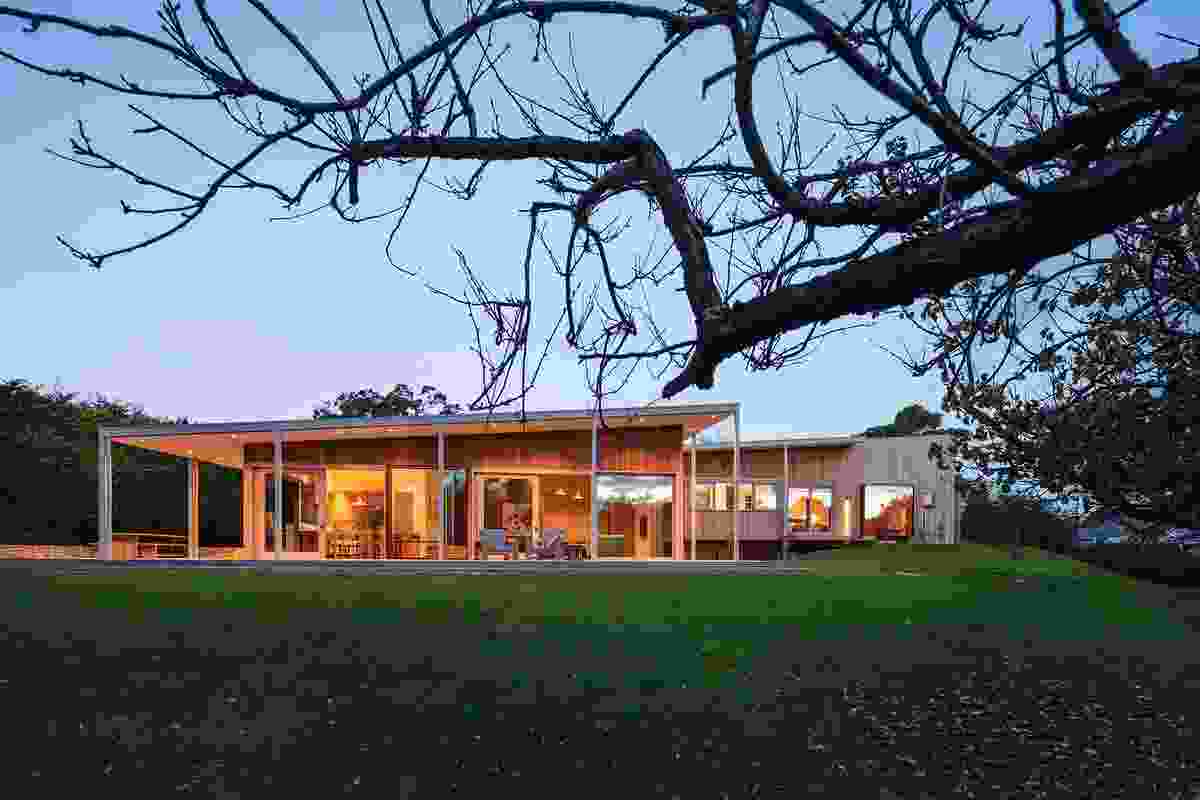 In deference to the architecture of the existing building, the extension of the bedroom wing, seen here at right, continues the pitch of the old roof.

O’Connor and Houle has relocated the kitchen space into the most intimate corner of the room.

The renovation opened up the kitchen and dining area to adjoining gardens through floor-to-ceiling, high-performance glazing.

The lounge area has been newly positioned under the lofty raked ceiling at the southern end. 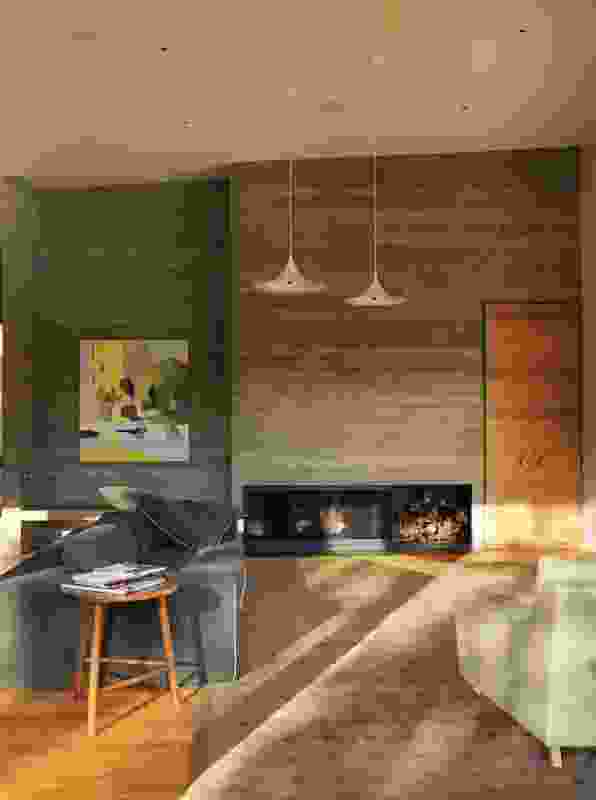 The addition of an off-form concrete wall in the living area anchors the otherwise light and airy space. 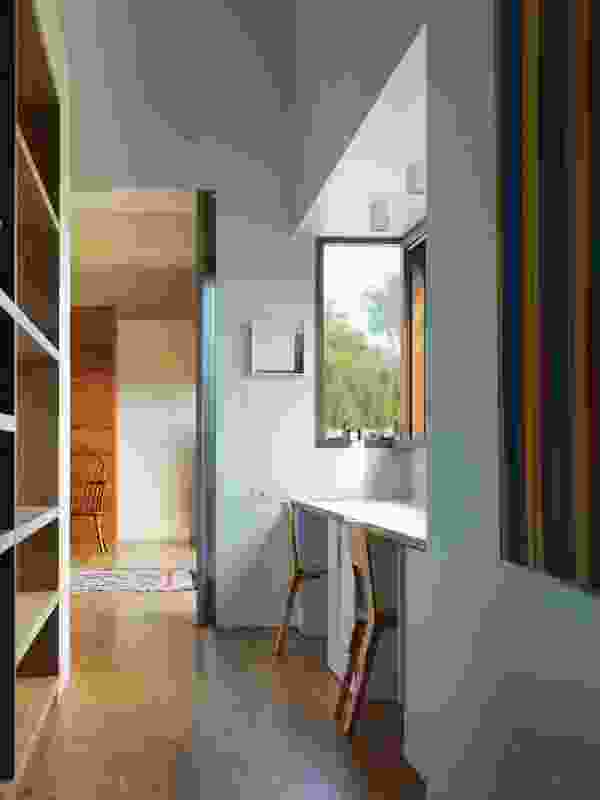 A study nook in the corridor has been refinished with new joinery.