A quaint walkway stepping up from Melbourne’s Yarra River is the sole means of access to this 1930s brick home, where an extension by AM Architecture fulfils the owners’ desire for a treetop sanctuary.

In time, the home will recede into the rambling landscape –its copper shroud will patina into washes of green and foliage will climb its blackened space frame.

Sitting within inner Melbourne’s fine-grained Domain Precinct, South Yarra House by AM Architecture binds together a semi-detached heritage dwelling and its expansive sloped site. The architects have drawn on a quiet design approach that subtly commands the experience of the home’s landscape and picturesque built context. Accessed solely via a quaint pedestrian walkway stepping down to the Yarra River, the 1930s house offered much charm but little connection to its surroundings. Seeking to make the most of the site’s wide-ranging views to the river and the city beyond, the clients wanted a “treehouse” from which to delight in the outdoors.

The extension is composed of two distinct parts. At the top of the house, a stepped copper shroud forms a striking silhouette of its clinker-brick neighbours’ pitched terracotta roofs. Below, a blackened space frame, also stepped, reaches up from the ground, softening the expansive twelve-metre-high northern elevation and breaking down the mass of the house with permeability and texture. Each element is designed to recede into their surroundings over time: the copper will slowly patina into washes of green, melding with the adjacent rooftops, and foliage will climb the frame, transforming the facade into a continuation of the rambling landscape.

Internally, the extension is pulled away from the rear facade of the original house. A double-height void draws attention to the unassuming aged brick of the old home, whose rugged tactility and inflections provide unexpected warmth and richness to the crispness of the addition. The home’s original Victorian ash flooring is continued through the extension, where a generous kitchen and dining area is executed with simple detailing. The timber sides of the kitchen bench are topped with a finely profiled stone surface. A wall of sleek black cabinetry lines the western edge of the kitchen space, affording separation from the bustling walkway beyond.

The front of the house has been sensitively restored. While circulation has been redefined for modern living, the home’s original sense of comfort, enclosure and serenity has been retained. A new laundry and powder room, inserted into the existing building envelope, are saturated in a striking green hue that will eventually match the oxidized tones of the external copper cladding. Upstairs, the existing bedrooms have been restored and refinished with restraint. Incongruous additions were stripped back where necessary, while the primary corridor was widened and lined with joinery along the western edge. The bathrooms are pared back yet considered; heritage-inspired fixtures provide personality and gentle green accents add a playful touch.

The single new opening cast into the existing house is treated as a steel-lined threshold to the upper level of the extension. Here, a short bridge creates a sense of suspension within the double-height void and draws attention to the elevated nature of the home and the finely ribbed profile of the copper addition. Beyond, the main bedroom offers broad views to the established canopy and neighbouring roofs. A north-west-facing corner window fitted with perforated copper screens references the irregularity and grain of the home’s existing windows, bringing together the disparity of the old and the new. A central window with deep copper-lined eaves provides northern shading in summer. Wardrobes lacquered in white and oxidized green stop short of the ceiling, emphasizing the height of the space.

The shroud and space frame dip and rise to modulate the experience of the site. To the west, the frame rises to form a screen that filters the sun, then lowers gradually to direct northern views to the Yarra, where the shroud lifts to maximize northern light. To the east, views to neighbouring flats are buffered by a lowering of the shroud, which rises once again to reveal a new south-eastern deck. Operable windows to the deck and northern fringe encourage cross ventilation while extending views to the far corners of the site, increasing the sense of space.

The site’s steepness and the lack of vehicular access directed the design and construction approach, including the lightness of the materials used. Director at AM Architecture Andrew Mellios says, “We deal with pragmatics in a direct manner and try to find a poetic resonance to how that’s expressed.” Seen from the Yarra below, the robust forms of the elevated home offer a surprising softness. Behind its gentle disguise, South Yarra House is a home hiding in plain sight.

Aboriginal Nation
Built on the land of the Boon Wurrung and Wurundjeri people of the Kulin nation. 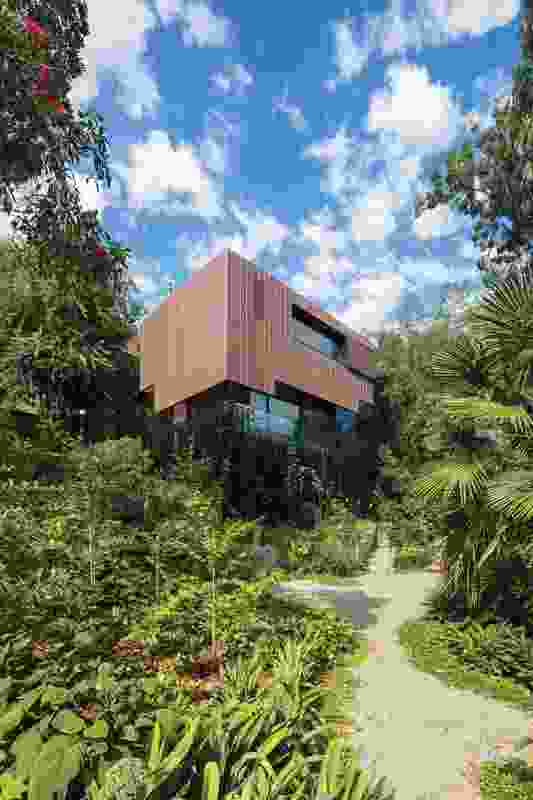 In time, the home will recede into the rambling landscape –its copper shroud will patina into washes of green and foliage will climb its blackened space frame. 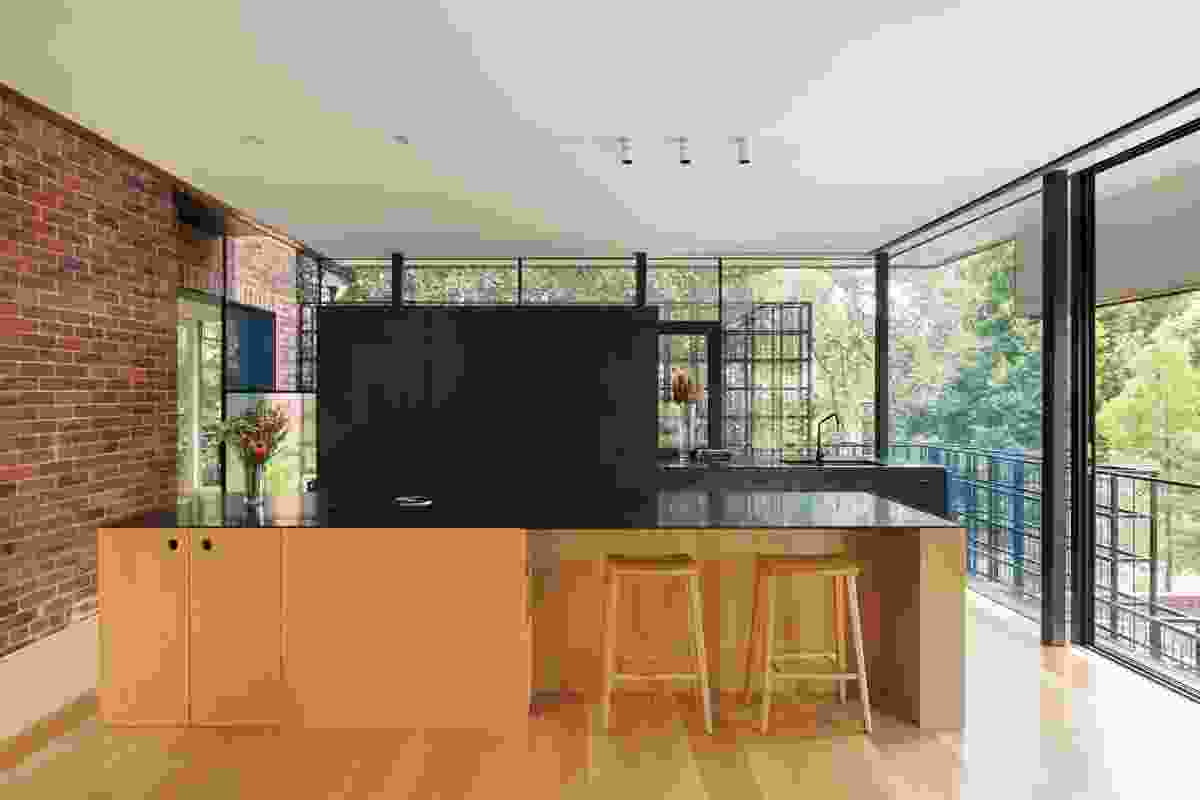 A wall of black-stained cabinetry lines the kitchen’s western edge, affording it privacy from the neighbouring walkway. 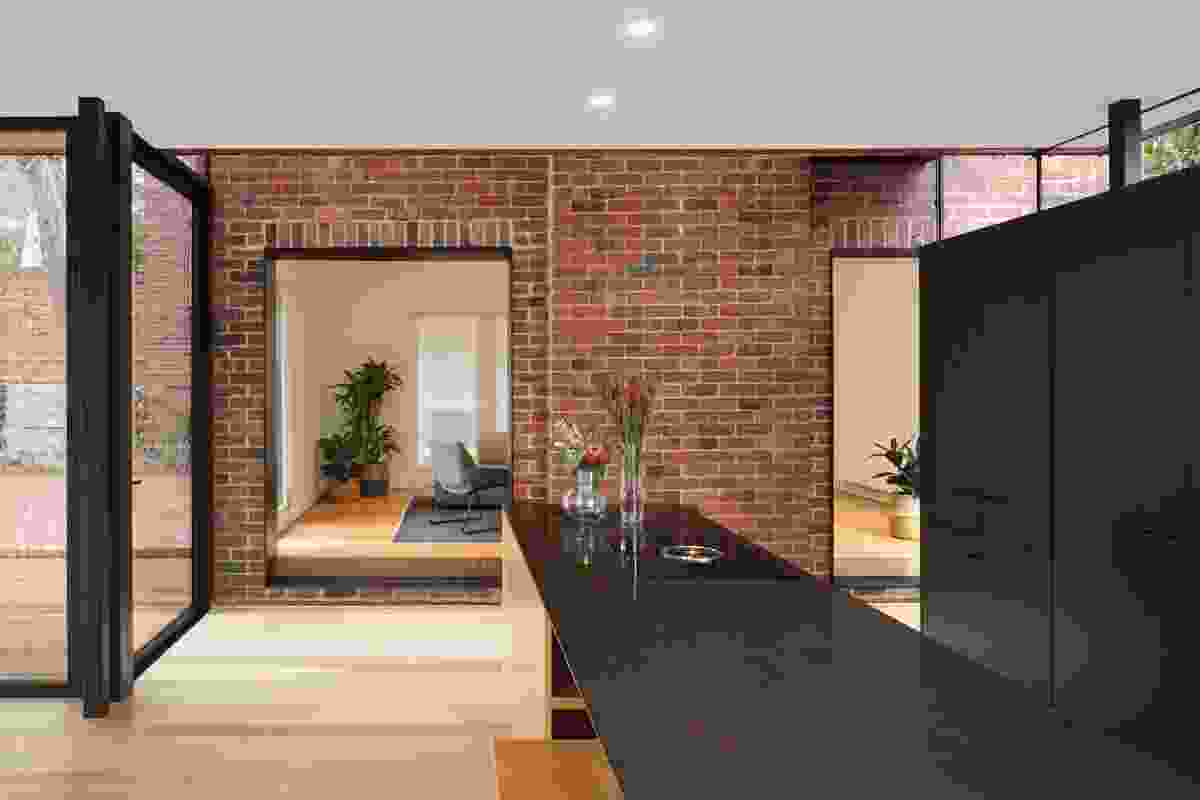 A new Victorian ash floor continues the material palette of the original home. 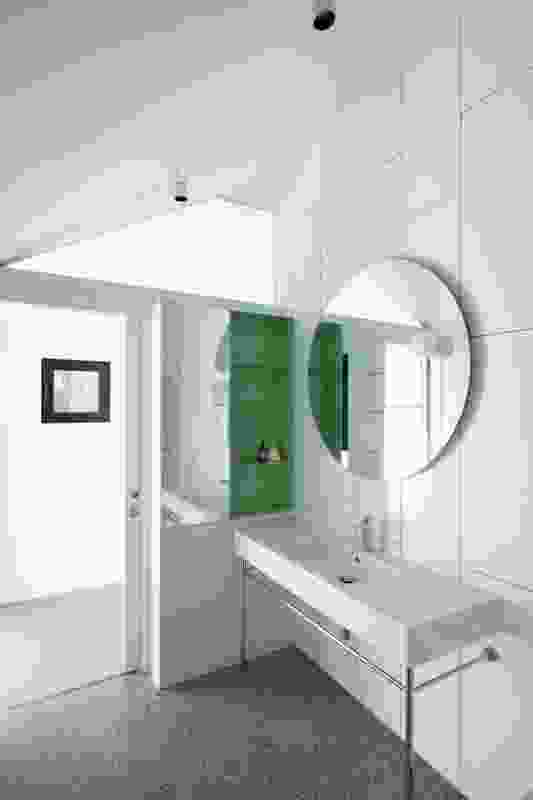 Gentle green accents are a playful touch in the pared- back bathrooms, where heritage-inspired fixtures add character. 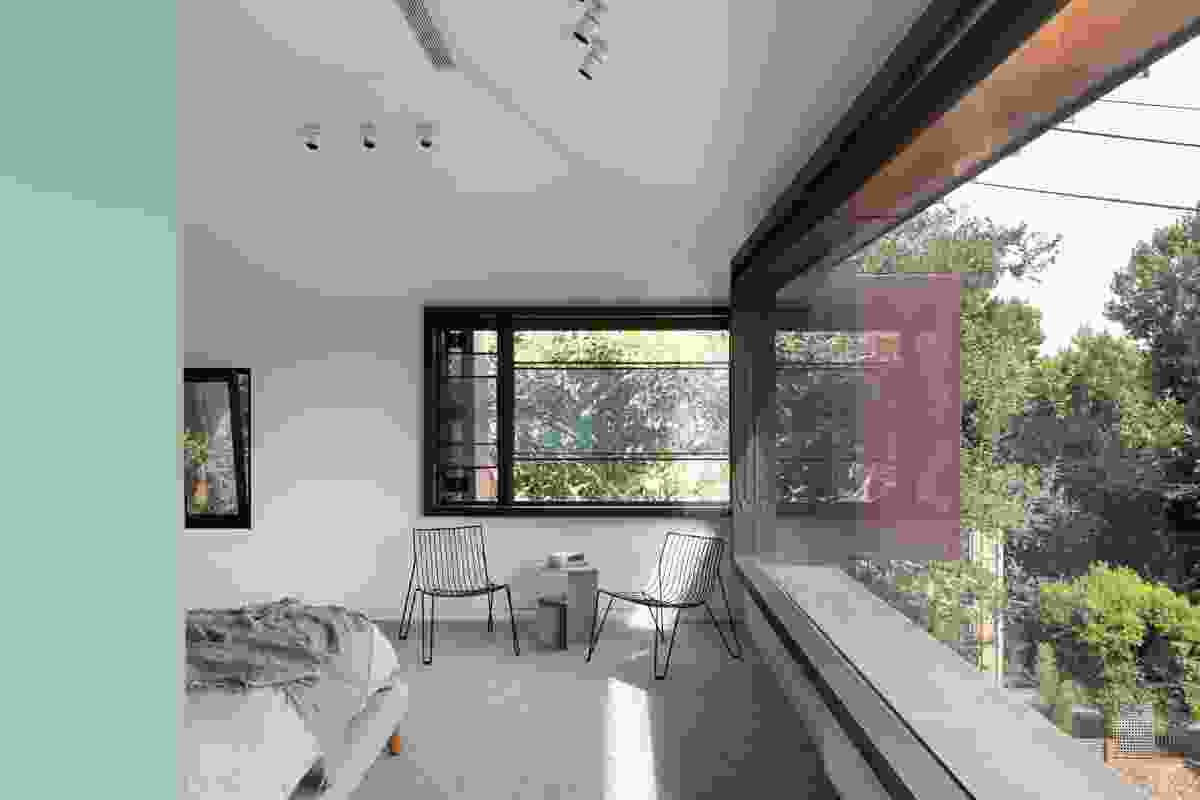 Older incongruous additions have been stripped back where necessary, while existing bedrooms have been restored with restraint. 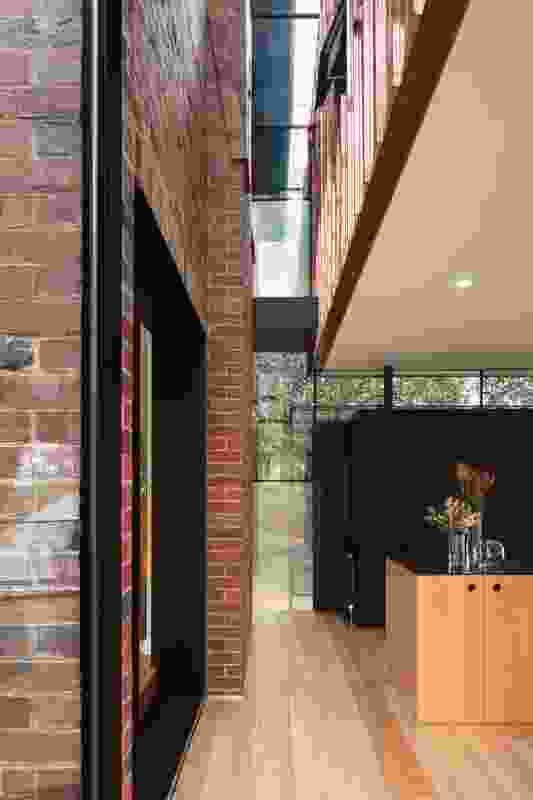 A double-height void marks the transition from restored 1930s house to new extension.