The Gold Coast comes of age with a civic space that provides an alternative to theme parks and reconnects the CBD with the environmental elements which make the region so attractive.

The parkland’s pavilions house a wide range of functions, including a gallery, an outdoor performance stage and council offices.

The Gold Coast is not somewhere that comes to mind as an epitome of high design. The place conjures images of holiday fun, wide beaches, meter maids, high-rise developments, canal housing and theme parks, all with echoes of Miami Beach. North of Tweed Heads in New South Wales, it forms a linear strip of straggling tourist and retirement accommodation with only a few glimpses of its famous beaches until you reach Southport and the Broadwater.

White pavilions mark the foreshore of Southport CBD, triggering memories of the follies of the Parc de la Villette - one of the key 1980s benchmarks for contemporary park design. These pavilions are part of the new Stage One Southport Broadwater Parklands designed and coordinated for Gold Coast City Council (GCCC) by landscape architect AECOM Design + Planning (formerly EDAW), with local practice White Architecture as sub-consultant. It is part of the Q150 Legacy Infrastructure Program, where the Queensland Government co-funded projects to celebrate the state’s separation from New South Wales. The $32 million Stage One project extends from the Gold Coast Aquatic Centre in Southport to the Broadwater swimming enclosure and includes the 105-metre-long pier that forms the spine of the park and provides an opportunity for views of Surfers Paradise, the Spit and Southport.

Prior to redevelopment the site was a 1,000-space car park servicing Southport CBD, which is located on the other side of the Gold Coast Highway. One of several CBDs on the Gold Coast, Southport is home to a major public hospital and Griffith University. It has been Brisbane’s holiday resort for a century and is identified as a major growth area. A new rapid transit system being planned for the Gold Coast and the GCCC is developing its economic base to ensure the city is not just reliant on tourism.

This new urban parkland is an alternative to the commercial theme parks both in and on the outskirts of the Gold Coast. As Sarah Chalkley, landscape architect for the GCCC, explains, the site’s brief called for catering of two key events that contribute significantly to the local economy - the annual Gold Coast Airport Marathon and the World Championship Triathlon. The marathon attracts 25,000 participants and 15,000 visitors, so there was a need for very large event spaces.

Joshua Hinwood of AECOM says that the design response to the brief was to cater for these event spaces and to “return the parkland to the community and connect it back to the CBD by having only a small car park, and to pay homage to the natural beauty of the Broadwater.” They achieved this by structuring the park around a major spine that links the pier with the CBD. An at-grade crossing replaces the former underpass (now used for underground services) and connects the CBD with the pier as a “key message to rehabilitate and draw the street into the park,” explains Hinwood. The event spaces are represented as rectangles. Chalkley explains that they are “exact replicas in size of a Southport street block, thereby melding the natural with the urban, and are designed to be seen from the high-rises above.” Hinwood points out that “the logic was to activate those major and minor spaces and to cater for events. The other point is that while it’s a really contemporary civic space, there is a strong desire to have fun and reflect the Gold Coast’s relaxed culture through the paving patterns, the shelters and the eye-catching park furniture, which is inspired by people bringing their own deckchairs and towels to the beach.” The designers have catered for everything, including photo opportunities and more reflective and intimate spaces. Chalkley also notes that “an experiential children’s water play area is currently under construction and some surprising public art will be launched mid year.” Environmental initiatives are integrated into the parklands in two ways. Applying water sensitive urban design initiatives, the 2,700-square-metre urban wetland filters and cleans nearly five hectares of stormwater run-off from Southport, which was formerly piped directly into the Broadwater. Integrated into the pier is a 300-metre-long spine of solar panels that generates the best part of the site’s electricity needs.

The overlay of angular, gleaming white pavilions anchors the spine and event spaces. Designed by White Architecture, these are the eye-catching shapes that can be seen from the highway. Simon White of White Architecture explains that the pavilions are “integrated into the landscape as built forms to be encountered, inhabited and experienced from every angle. It was important for them to be seen as civic buildings and not just timber and tin sheds. They needed to be robust and substantial and yet actually project an apparent lightness at the same time.” The pavilions house a wide range of functions including a visitor centre, a gallery, an outdoor performance stage, depots, toilets, council offices and, soon, a cafe.

A first principle for the architects was to “generate a robust and animated architectural language to be applied across all the built forms, and to consider the client’s and the park’s sustainability overlay at all times.” The bathing shelters with their play of colourful battens made from recycled plastic are an example of this consideration. The play of shadow and dappled light from the pavilions’ perforated panels reflects the fun of the Gold Coast. Electrical and water needs of the site and events were dealt with by being incorporated into walls, minimizing the impact of these services on both the park and the public.

Another layer of the park design is the artistic one. AECOM writes, “John Tonkin, electronic artist, was commissioned through our art consultant, based on his idea of creating a ‘nervous system’ consisting of twenty light- and sound-emitting poles. These poles act as a barometer to activities within the parklands, responding to the sound, light and movement of the Broadwater, the natural environment and its visitors.”

Looking at the pavilions and parklands in the context of the Parc de la Villette, it is possible to draw some broad parallels. When architect Bernard Tschumi won the competition for the park in 1982, it was hailed as a new park for the twenty-first century - there was a break from the “green lung” model and respite from the urban life method, where urban activities would be located within the park boundaries. It was a huge post-industrial site and the park’s brief was notable for its enormous and ambitious program of functions and activities.

French landscape architect Bernard Huet commented on Tschumi’s approach to La Villette’s design by saying, “It is made with the idea of filling it up with many things for everybody … There are forty of these follies and each one is supposed to be for some kind of activity. It corresponds perfectly to our silly world of consumption … it is not a new concept … we are obliged to think that people have to do something … We are afraid of emptiness. Afraid of the void, an empty, beautiful space”.1 The GCCC has adopted a program that works for a consumerist culture. While there are enormous spaces, there is also a very large program and demands placed on those spaces. As Chalkley notes, it was a substantial and generous budget in council’s terms, and the development needed to have the “wow” factor. In contrast with La Villette, though, the brief for Broadwater was largely driven by a program that includes activities and reconnects Southport to the empty, beautiful space from which its sense of place is derived from. 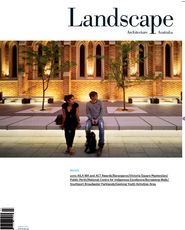 The parkland’s pavilions house a wide range of functions, including a gallery, an outdoor performance stage and council offices.

The pier forms the project’s spine, linking to the CBD and drawing the street into the park. 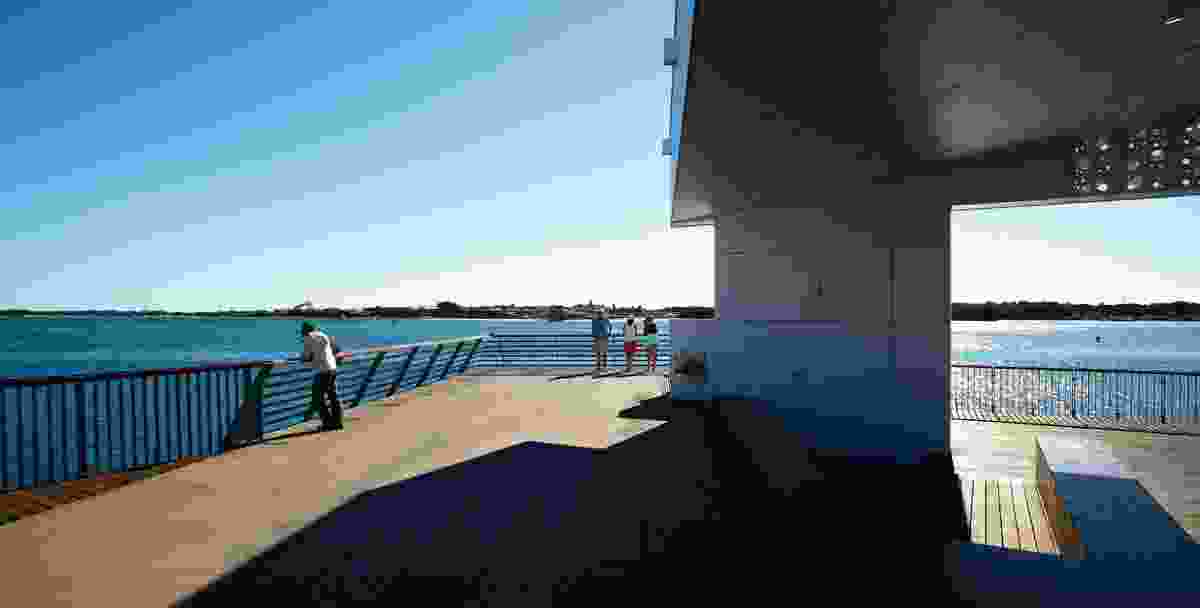 The schme provides areas for photo opportunities as well as more intimate spaces.

The site was required to cater for large events such as the gold coast airport marathon and a world championship triathlon, and its spaces have been designed to be viewed from high-rises above.

Over 300 metres of solar panels generate most of the site’s electricity needs.

Once home to a 1,000-space carpark, the site now has far less parking in an attempt to return the space to the community.

The park’s furniture is inspired by people bringing their own towels and deckchairs to the beach.