The renovation of a Sydney terrace house by Marsh Cashman Koolloos Architects offers a series of interconnected spatial experiences.

A window into a courtyard on the lower ground level acts as a light well.

There are certain themes that, regardless of trends and current manifestations of aesthetic and form, are enduringly relevant to the making of something distinctly architectural. They include simplicity, responsiveness to brief and client and the notion of appropriateness. Houses in particular can suffer from a predisposition to showmanship and architectural extravagance, which arguably detracts from the notion of home and results in a reductive modernist pastiche or an overwrought materiality, clichéd in its sentimentality.

Good judgment in architecture requires not only a certain level of skill, but also an external set of limiting parameters that are either pre-existing in the project, consciously imposed by the architect or both. In the case of the Split House by Marsh Cashman Koolloos Architects, the limitations set up by the existing split-level house, the earlier 1970s renovation and the context of the Paddington terrace all combined to form a defined framework within which MCK could find the freedom to create a series of interconnected and tight spatial experiences.

Taking an opportunistic approach, the architects set out to exploit every possible aspect of the house that was underused and had poor amenity. Inherent within the terrace design are the basement spaces. Located a full level below the street, these spaces usually connect to it via a narrow external staircase in the front courtyard, which renders the space ineffective and largely unusable, with minimal light and inadequate ventilation. A key move in the Split House was to directly address this lower level and make it an integral part of the house. With the removal of the front courtyard and its effective replacement a whole level down, MCK has created a clear connection through the house from front to back. Indeed, this is the only such connection, as the remaining spaces are linked vertically via voids and generally have a single orientation to either front or back. Consequently the house has a distinct sense of interiority, its rooms contained and internally focused.

Pivotal to this aspect is the central void, a space that already existed but only over two levels. By expanding the void over three levels to incorporate the basement, MCK was able to create an organizing element to which the main rooms relate. The resultant distribution of spaces within the house is then understood in relation to the void and although floor space is a premium in compact houses, the trade-off in terms of amenity is of far greater benefit. The Split House is a constant play of removal and insertion of spaces and elements and can be understood as a collection of positive and negative spaces, defined by built objects within the perimeter walls and voids removed from the existing volume. Definition is given through materiality and surface. Timber is used for flooring and in particular ceiling and wall panelling. Joinery alternates between polyurethane and warm timber veneer and the quirky selection of a bathroom tile or kitchen splashback adds moments of the unexpected to an elegant and understated palette.

On the upper levels, three bedrooms are located around a central bathroom. The owners’ choice not to have an ensuite was a considered move given common sentiment, but one that creates a more generous and open master bedroom. The main L-shaped bathroom is located along the eastern side of the house; the shower recess, within a long narrow slot, was the result of shifting an old skylight from its original location to the new void. The full height of the house is also exploited here, extruding the space upwards, giving it an abundantly generous feeling and infusing it with southern light from the high-level windows. Existing structure is clad in timber panelling and the thematic use of materials is continuous throughout the house.

To effect the full transformation from old to new, the rear elevation has been completely reworked. Incorporating a finely balanced aesthetic of timber, white walls and steel detailing, the facade relies on the deft handling of proportion and composition in order to achieve its apparent simplicity. In concert with the garden and the small rear structure, the house sits comfortably both in itself and in the context of its setting.

The Split House is an exercise in restraint, a project that sits above the register of the average renovation, but not in the realm of the extravagant. The house serves its occupants, limitation serves to constrain and constraints provide the opportunity to make what may be called “a real architecture.” 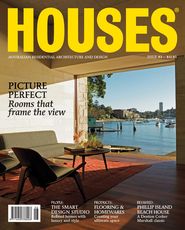 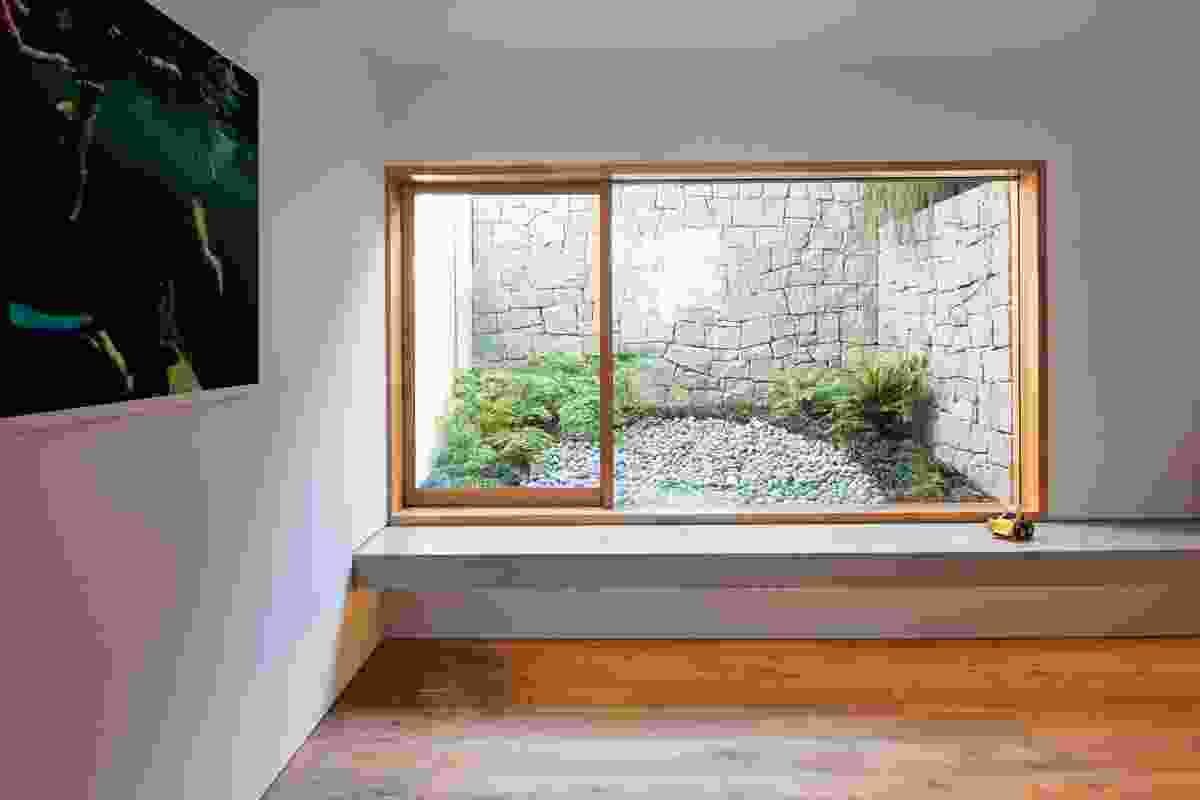 A window into a courtyard on the lower ground level acts as a light well. 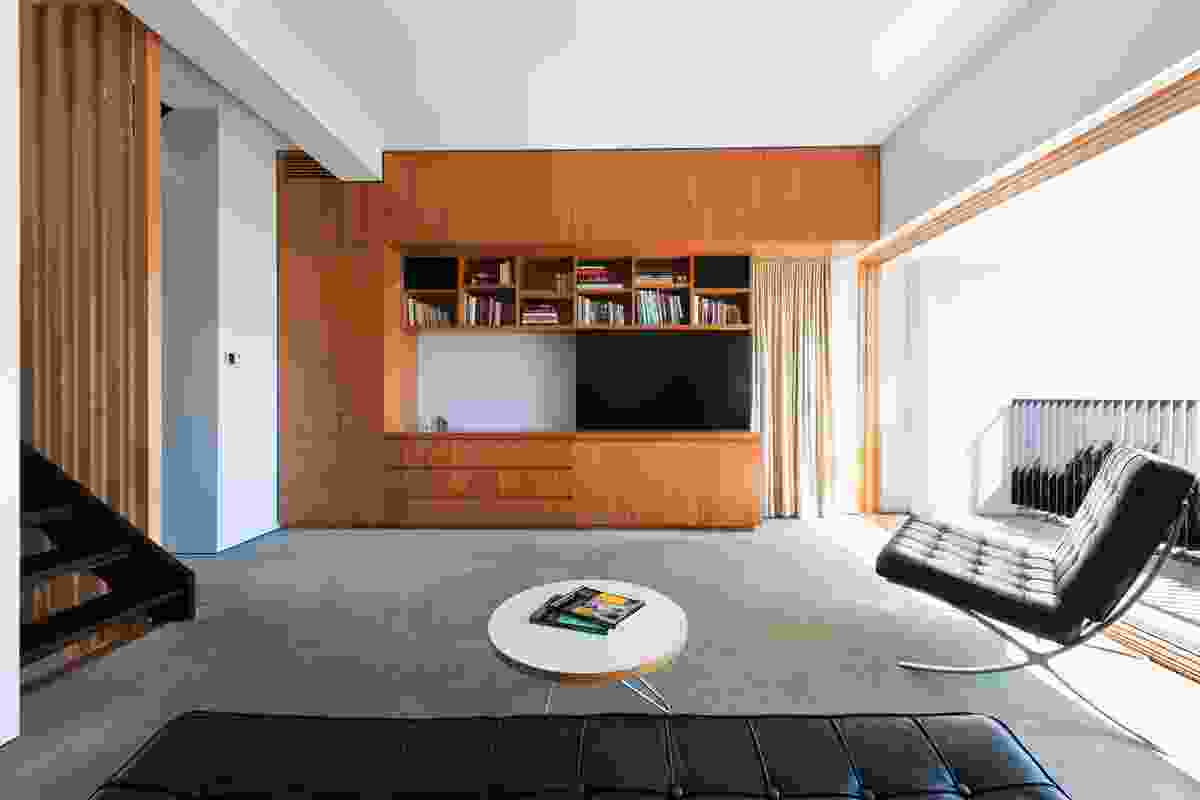 A living space with a balcony sits above the dining and kitchen. 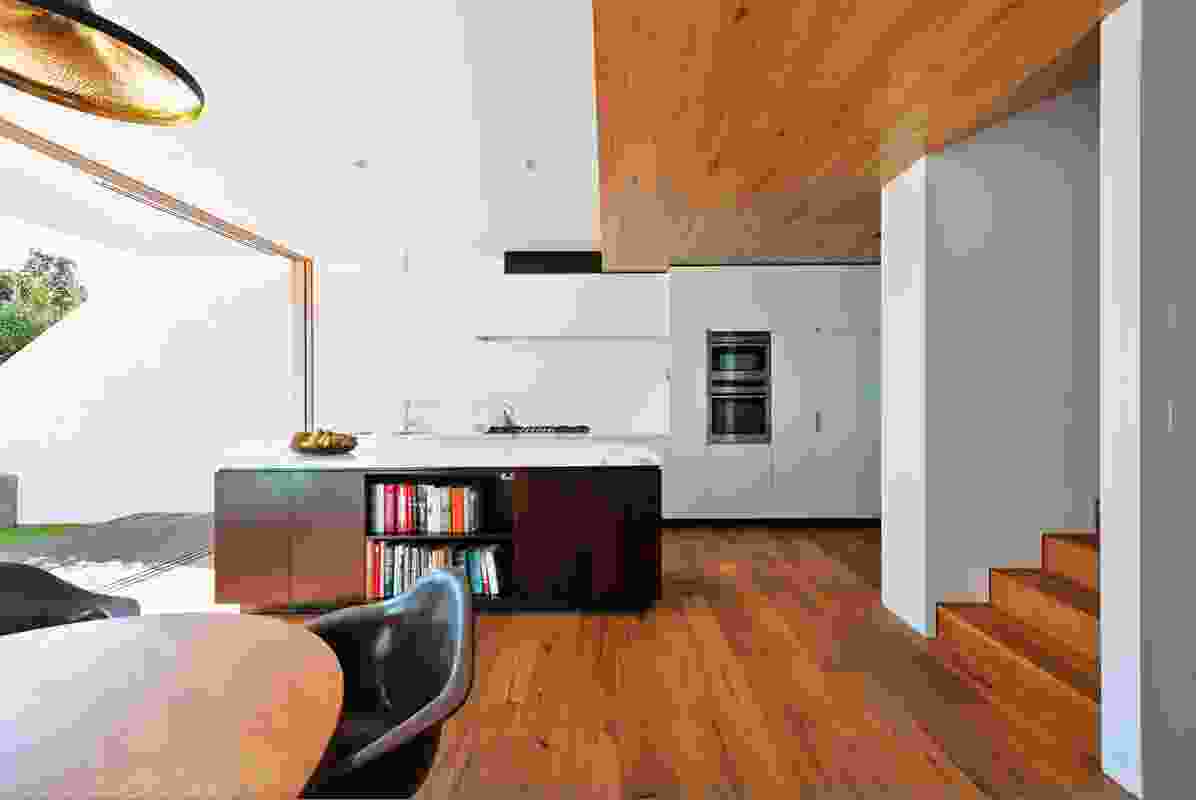 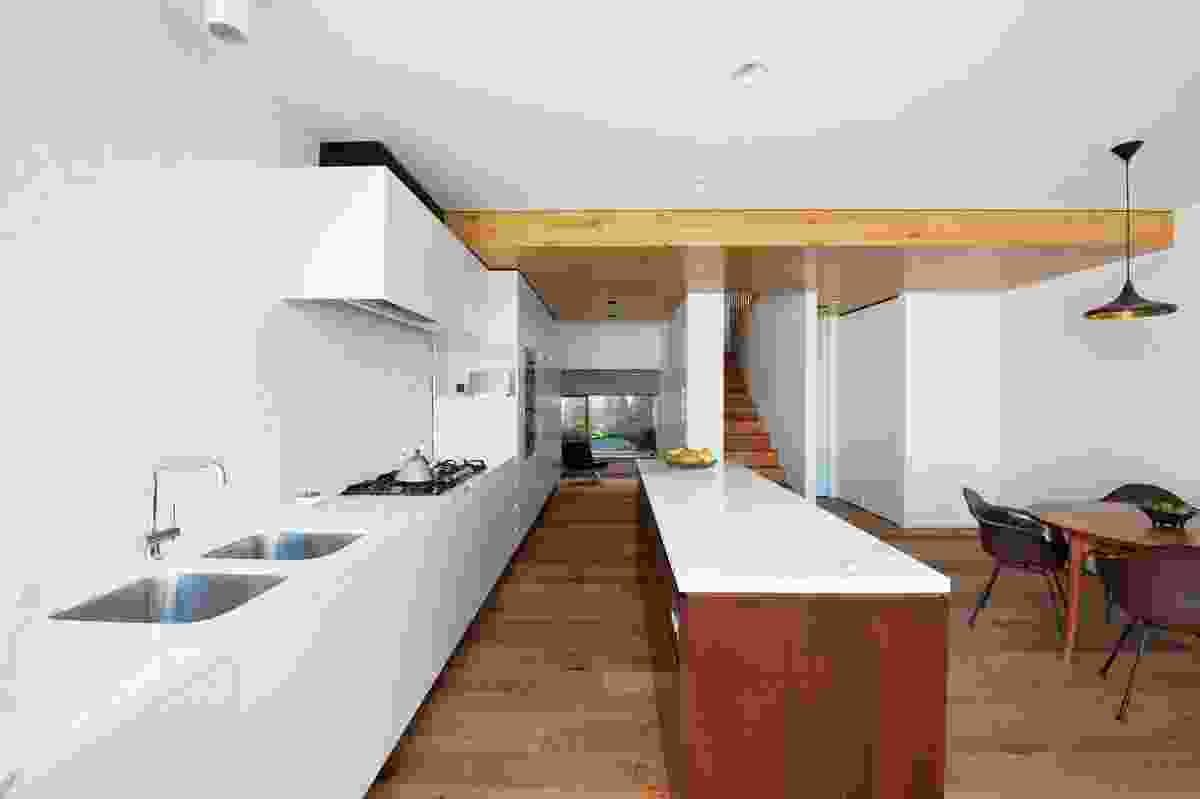 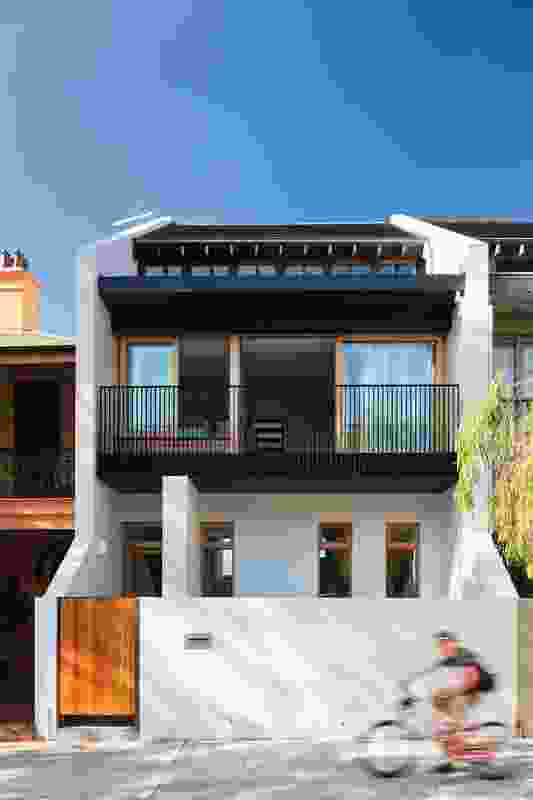 The interior materials and textures are carried through into the street facade. 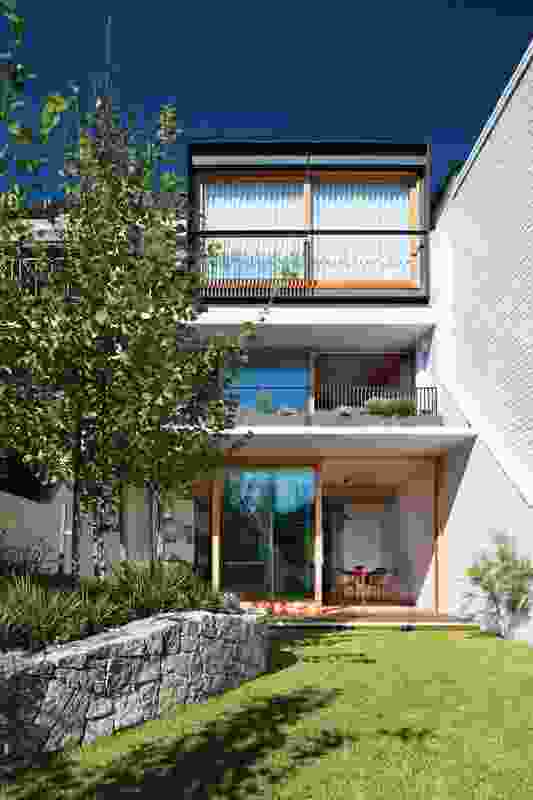 The rear elevation reworked, with “deft handling of proportion and composition.”