Overlooking the wild waters of Bass Strait, a family beach house by Perkins Architects carefully responds to the site and its surrounds.

Natural materials camouflage the building in its surrounds.

The coastal hamlet of St Andrews Beach is less than ninety kilometres from the Melbourne CBD - an easy weekend commute. This proximity and the location’s geography makes it a popular spot for Melbourne’s mad-keen surfers and golfers. The eclectic houses of St Andrews Beach are dotted along the gruff, foreshore landscape. Here, nestled in the sand dunes, is Perkins Architects’ recent addition to the Mornington Peninsula’s assembly of unique and award-winning residential architecture.

The site for this new beach house is right on the rugged foreshore, abutting a large tract of nature reserve. The family were attracted to St Andrews Beach for the seclusion of the unspoilt, coastal environment. Weekends spent in the unremarkable fibro shack that previously occupied the site allowed them to engage with the qualities (and the challenges) of the location before they set about creating a new weekend home. Their brief to architect Ian Perkins was for a comfortable, family beach house that would maximize the amazing views.

When planning the indoor and outdoor spaces of the house, the architects aimed to carefully relate both spaces to the surrounding landscape. A resolute circulation spine that runs north-south at both the upper and lower levels sets up these relationships. At the lower level, the spine is a platform-like deck that draws you deep into the centre of the plan to create the accent to the upper level. En route to the front door, this deck opens out onto a small east-facing court that brings the unruly landscape and the morning sun right up to the edge of the built form. Here, a small upstand wall creates a great spot to pause for a late-morning cuppa.

Opposite, the stair hovers within a crisp, glass box. The arrival strategy is both practical and experiential. Ian notes that the “entrance is located here so that both the pedestrian entry and garage side doors enter at the same location.” The experience is also carefully thought out. “Once you are within the entrance volume you travel up with slight glimpses of the potential views. When you are up at the platform level you immediately gravitate toward the view and arrive at the living spaces.”

From the arrival point at the top of the stairs on the upper level, the circulation spine becomes a generous hallway from which the public and private rooms of the house effortlessly extend. To the north and south the hallway frames distant views of the hills and the ocean. However, it is to the west that the full extent of the expansive vista appears, unfolding across a pocket garden and the internal open deck. The batten screening of the eastern hallway window amplifies this moment of reveal.

In each of the spaces on the platform you are placed in a different relationship with the surrounding environment. This relationship is artfully composed through the handling of the various apertures. Particular views have been captured through strategically placed horizontal and vertical windows in both linear and corner configurations. In some cases these are protected with screening devices and shutters for added privacy. Each of the outdoor spaces has a different orientation, suggesting a mode of occupation defined by weather conditions. In the main living area there is a palpable feeling that the space is literally unfolding into the landscape, blurring, if not altogether erasing, the distinction between inside and out.

The north-south section, cutting through the billiard room, deck and lounge, subtly cascades the levels from front to back to further heighten the experience of the landscape. In defence of the aggressive weather, the two main living spaces can be opened up and shut down via large silvertop ash clad shutters that shield the house from the, at times, severe buffering of the wind and rain. On a clear day the living spaces really open up to the environment. Ian observes that this “creates the sense of living on a protected platform – with only roof and floor and minimal wall.” In this mode of occupation the walls literally disappear. As Ian points out, walls “are only used as buffers to neighbouring interfaces and as screening devices.”

Looking out over the wild waters of Bass Strait, this house has been designed as a careful response to the site and its surrounds. The overall material selection is both robust and natural. On the outside, the cladding and decking materials are already beginning to weather and silver with age and will eventually camouflage the building in its surrounds. As the elevated living platform engages us with expansive views and rolling topography, it also sets the scene for the occupants’ daily life. From this vantage you are positioned above the heavily vegetated ground plane, maximizing the views out over St Andrews Beach. It is this image of the house that lingers with you after you have left - not the exact details of the materials, finishes and furnishings, as well-detailed and practical as they may be. This lingering image is the key to the success of the project. 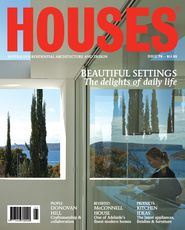 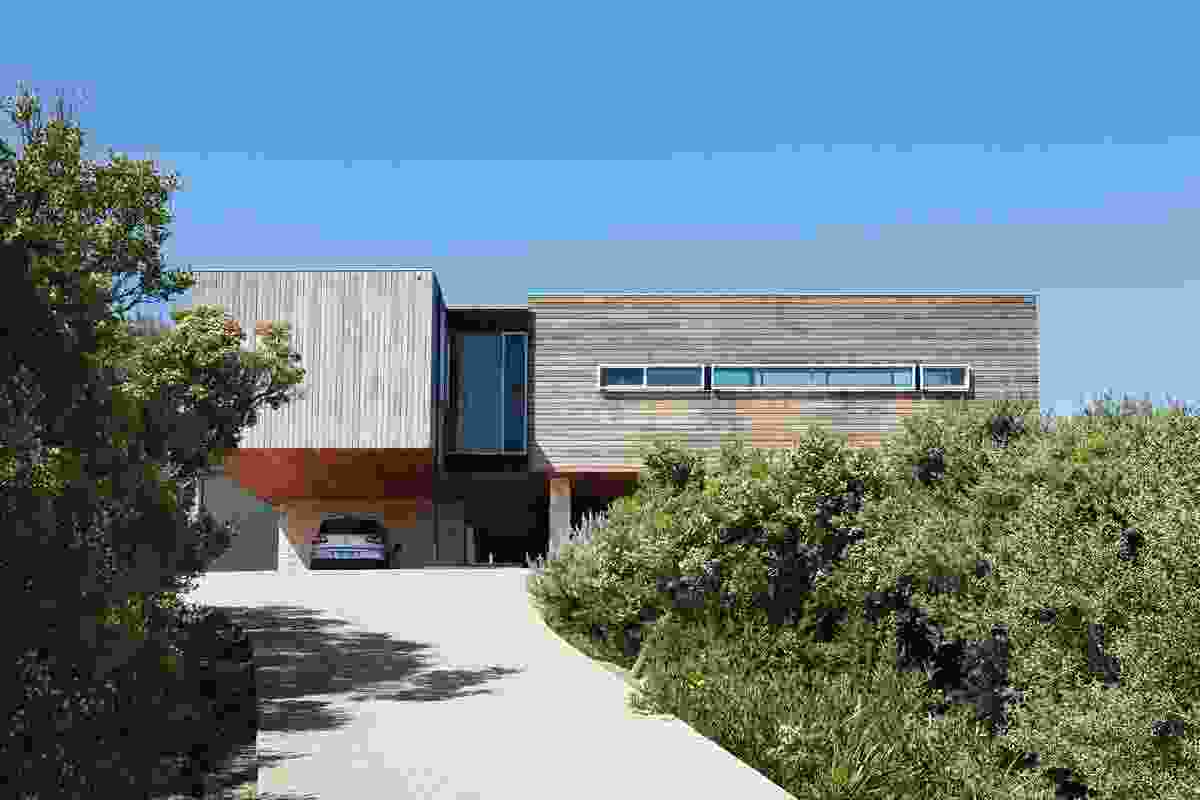 Natural materials camouflage the building in its surrounds. 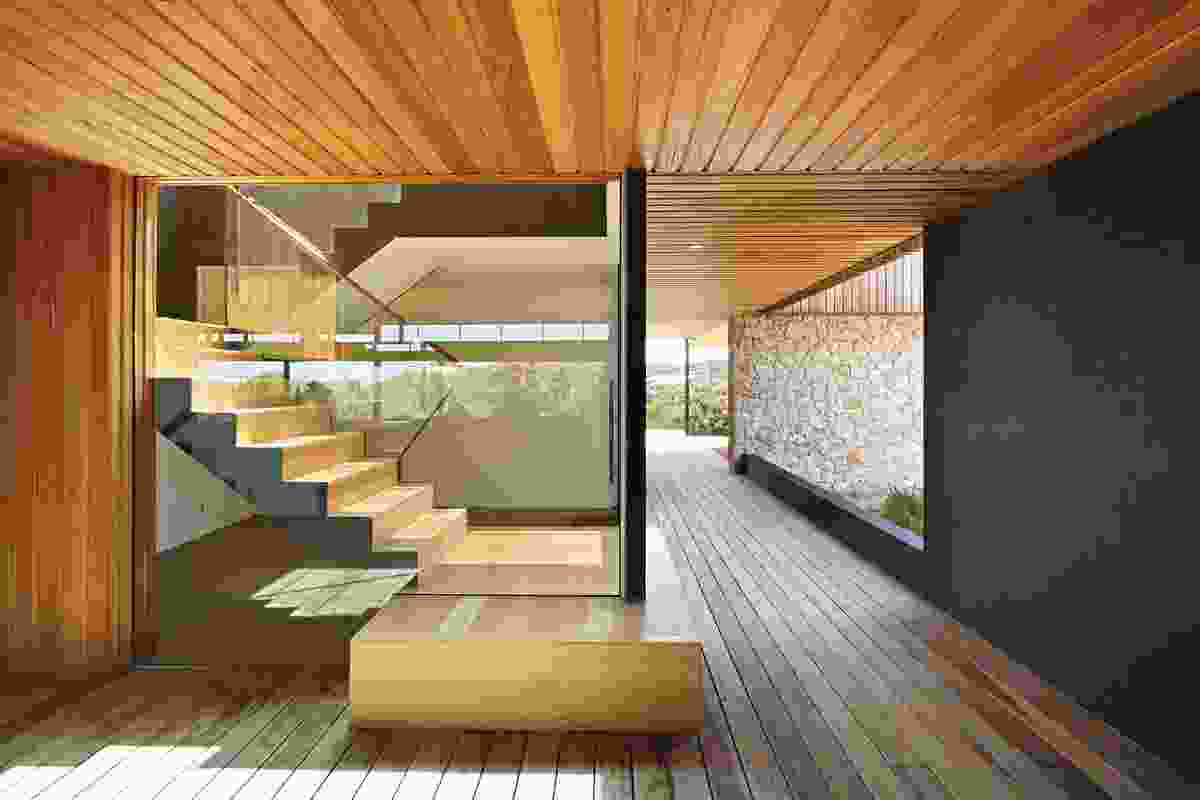 The entry stair hovers within a crisp, glass box. 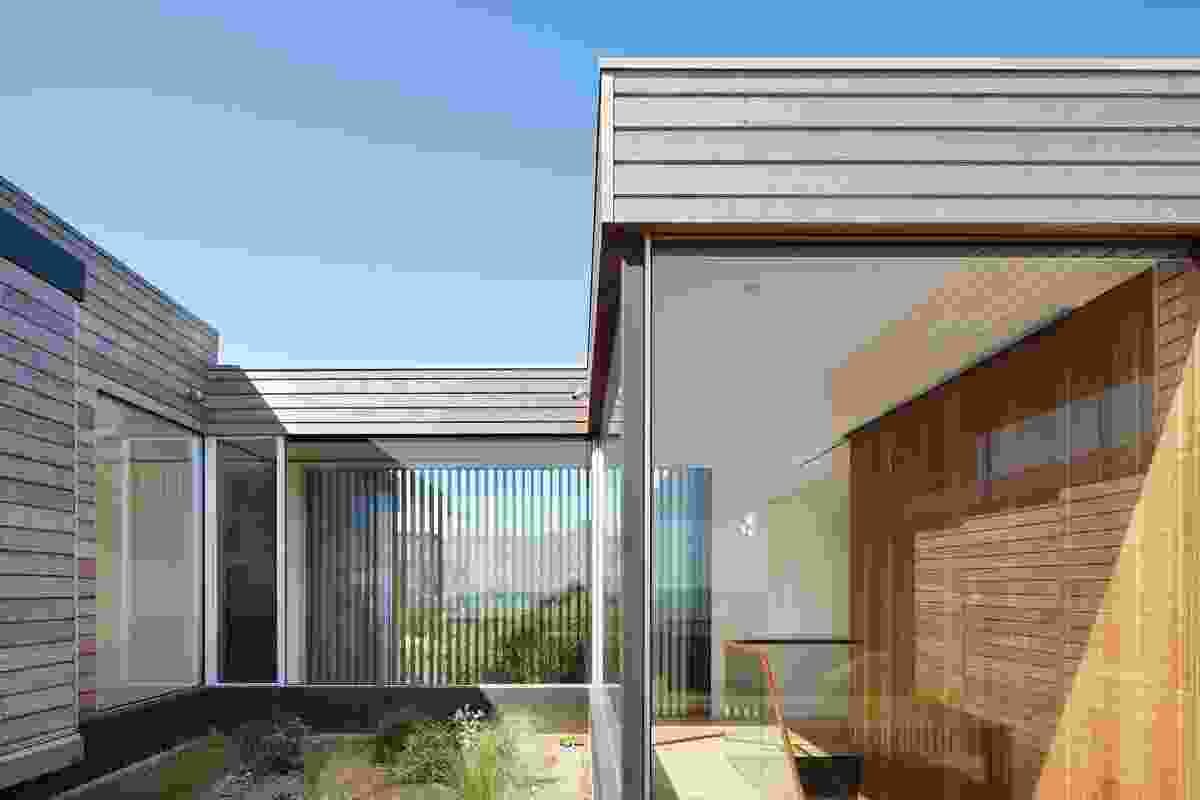 The arrival point pivots seamlessly between public and private space. 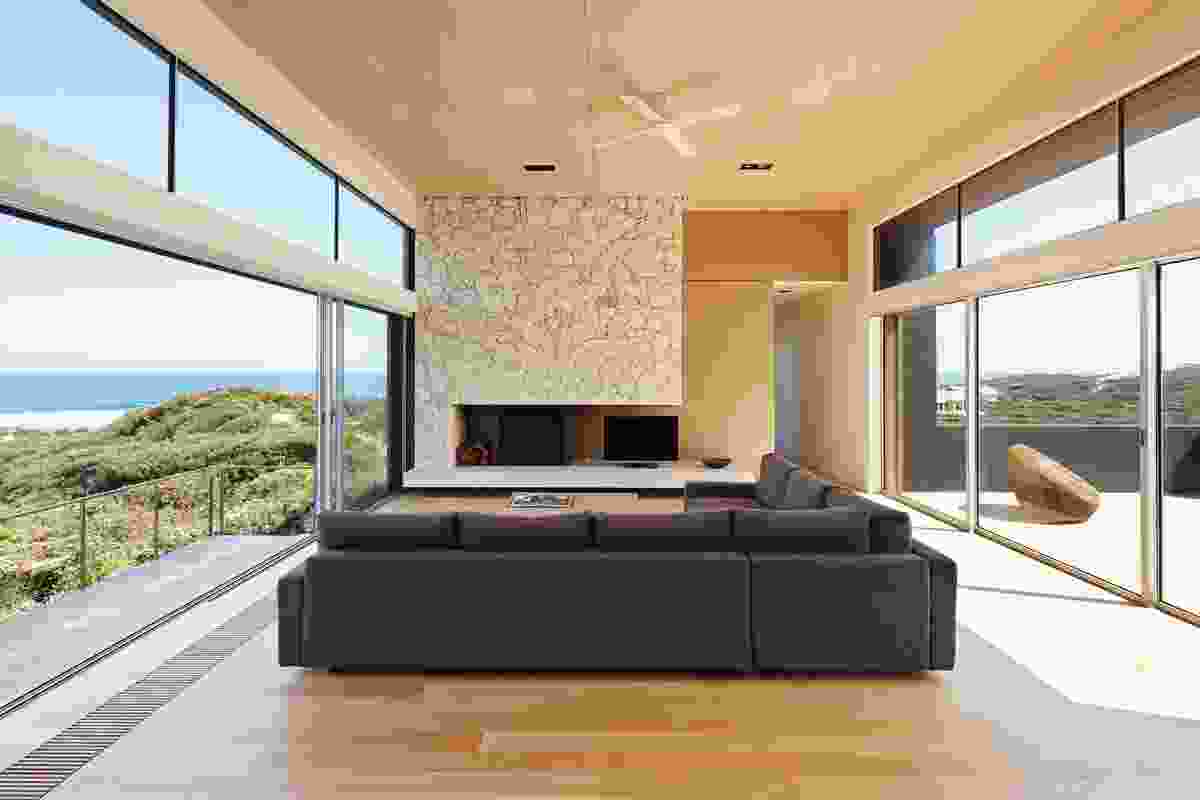 The lounge room is flanked by decks. 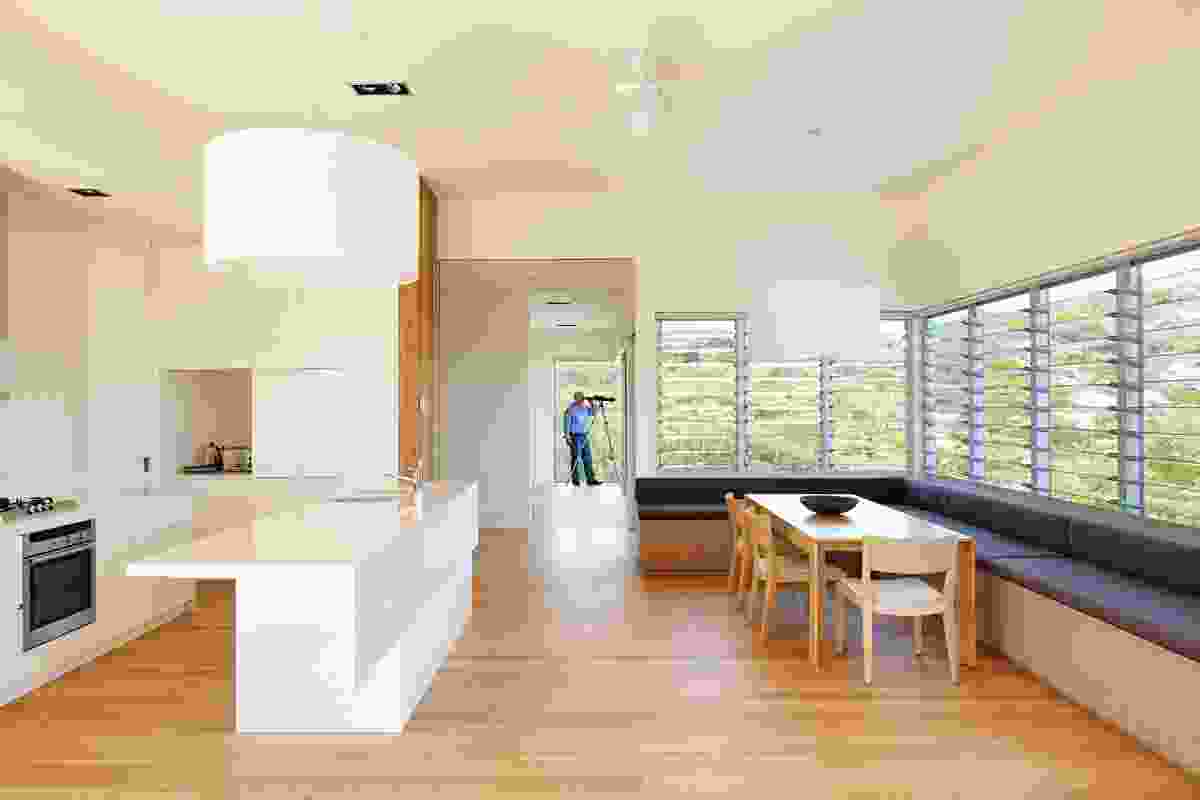 The generously scaled living spaces maximize views of the landscape. 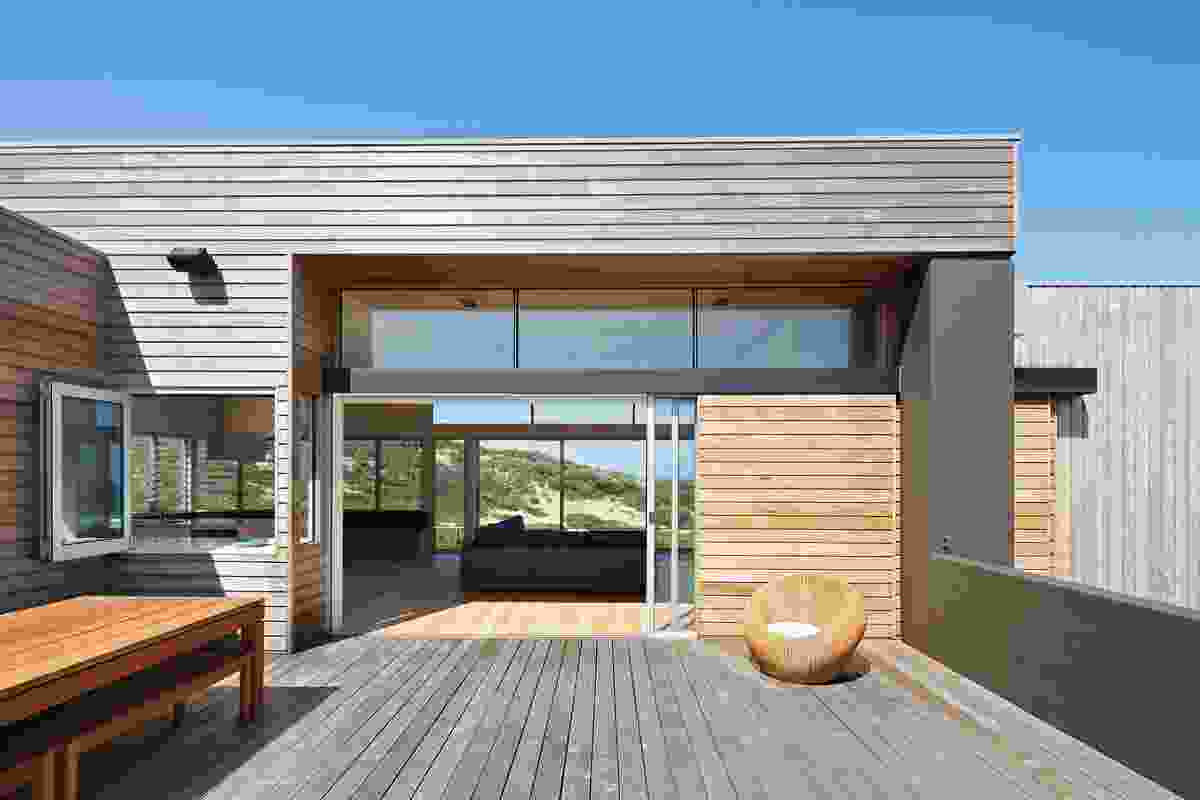 The lounge room can be shut down via large silvertop ash clad shutters. 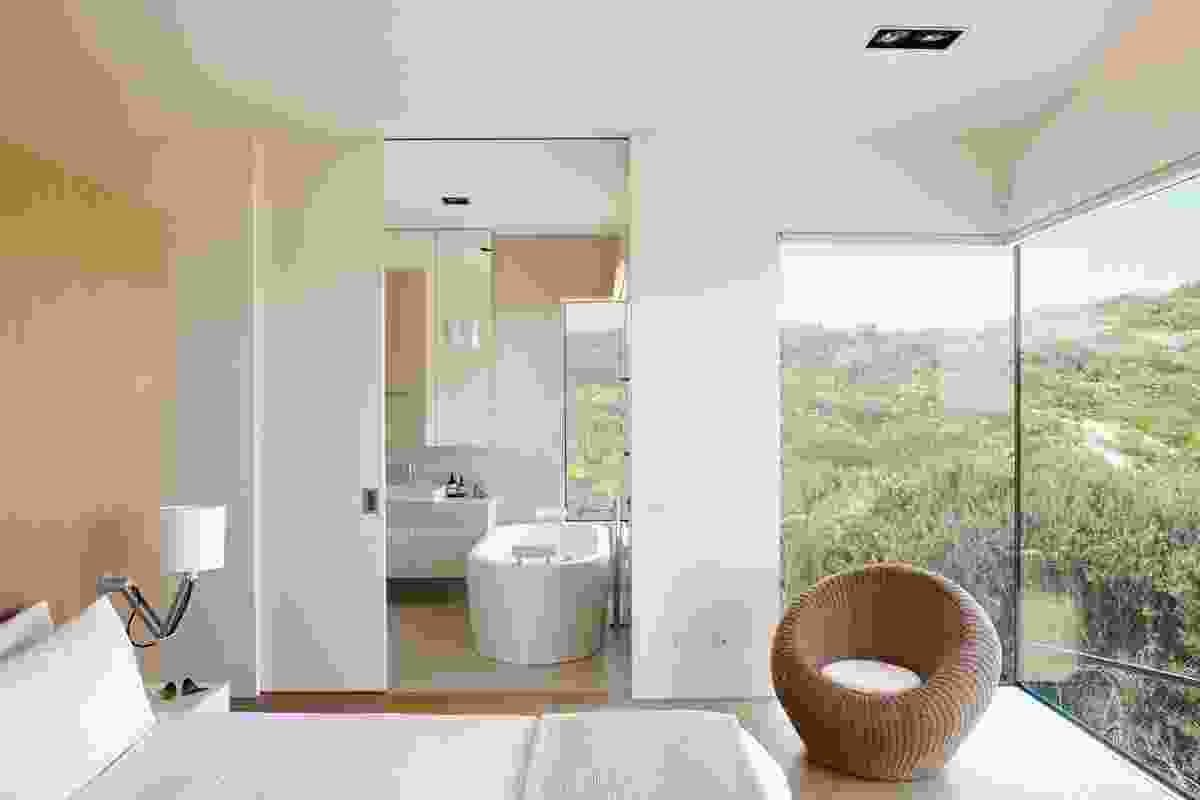 Window detailing visually embeds the house in the landscape.