The folded geometry of the chapel’s roof, with its ridges and valleys, is reminiscent of the first church buildings in Canterbury, the ‘V-huts’.

Although the Arts and Crafts Movement effectively came to an end with the onset of the First World War, it had a significant afterlife in the influence it exerted on the design and construction of war memorials during the 1920s and 1930s.

In New Zealand, its influence continued in the small country churches designed by Cecil Wood, R.S.D. Harman and Herbert Hall between the two world wars, and even extended into the 1950s. One of the last examples of this tradition was the chapel at St Andrew’s College, a Presbyterian boys’ secondary school founded in Christchurch in 1917.

Completed in 1955 as a memorial to old boys and staff killed in the Second World War, the chapel was designed by Cecil Wood’s former pupil, Margaret Munro. Jake Vivian, a one-time assistant of Wood’s favourite craftsman, Frederick Gurnsey, was responsible for the decorative carving of both the exterior stonework and interior furnishings.

Munro’s design was of red brick with Oamaru stone dressings and followed a traditional collegiate plan with a long, aisle-less nave, a modest sanctuary to the east and a square entrance tower at the south-west corner. The chapel made no response to the revolutions that had occurred in 20th century ecclesiastical architecture although, close at hand in Christchurch, Plischke and Firth’s St Martin’s Presbyterian Church (1953–1956) demonstrated that other approaches were possible.

Damage to the Memorial Chapel during the 2010 and 2011 Canterbury earthquakes was extensive, and the decision was made to replace the building with a modern structure that would be more versatile and also large enough to serve the entire college community, which had grown substantially since 1955 and now includes both girls and boys.

Wisely, the college chose to hold a competition, and the quality of the winning design by Architectus has fully justified this decision. The brief stipulated that heritage elements salvaged from the original chapel should be incorporated into the design, and also required a flexible space to allow it to serve multiple roles without compromising its spiritual dimension.

Fitting the building into the existing setting – with its stream, mature trees and views across playing fields to the Port Hills – was also a goal, along with the more prosaic requirements of warmth, comfort and good acoustics.

The footprint of the new Centennial Chapel is a large rectangle, with the north wall, a solid structure in red brick that incorporates the majority of the recovered heritage elements, anchoring the building and providing multiple links to the former building. Although the western entry, formed beneath the generous overhang of the roof, suggests that the interior follows a traditional east–west orientation, it is confounded on entering since the seating, arranged in a fan formation, faces to the south, where a wall of continuous glazing provides expansive views of stream, trees, open playing fields and distant hills.

The idea of opening a religious space to views of the natural world has a distinguished 20th century history, from R.S.D. Harman’s Church of the Good Shepherd at Lake Tekapo to the Siren’s modernist chapel at Otaniemi in Finland, a building that, significantly, was contemporaneous with the former St Andrew’s Chapel. By filling the entire south wall with glass, the architects risked creating a bland curtain wall, but this has been avoided by the decision to bend the wall into a series of five triangular bays, suggesting in plan form the repeated aisle gables of Gothic churches.

The effectiveness of the brick-clad north wall becomes even clearer on the interior, its apparent mass cut away to form a series of bays to accommodate the War Memorial Book of Remembrance, the font and also a contemplation room, sunk into the wall. This is accessed through the recovered doorway of the original chapel’s tower entrance, an imposing approach to a quiet and intimate space. No attempt has been made to restore these recovered elements; they bear the testimony of time and the scars of the earthquakes’ destructive power.

The central apsidal bay, in which the font is located, also incorporates the former east window, its stained glass glowing in the strong northern light. Its luminosity is enhanced by the curved walls that frame it, formed from an open lattice of bricks that create a mosaic of deep shadows and solid reds.

Along the south side of the nave, a raised dais runs the full length of the glazed wall, curving out in the centre opposite the recessed apse of the north wall to accommodate the communion table and lecterns. The floor is flagged with light-grey granite containing flecks of mica that sparkle when struck by direct sunlight.

The solidity of this large expanse of stone is complemented by the lightness of the American white oak veneer that covers the underside of the roof, a floating plane that is folded to form a double gable with a single leaf to the north that curves upwards and outwards towards the brick ‘heritage’ wall, to which it is connected by a clerestory. Although clearly modern in inspiration, the roof’s form nevertheless evokes its predecessor.

On the interior, the valleys of the double gables form a pair of wooden ‘hulls’ that frame the higher central space of the nave, evoking the traditional metaphor of the church as a ship. Hanging at the western end of the central section of the nave is a large box shape that houses the chapel’s original bell, previously hung in the tower that stood on exactly this spot. This ‘ghost’ tower further links the new chapel to the site of its predecessor, just as the sound of the bell connects past to present. From a distance, the square mass of the bell tower rises about the main roofline, a shadowy reminder of what once stood there.

It is a testament to the quality of Architectus’s design that, only months after its completion, the new chapel already looks as if it has always been there. If there is something slightly disconcerting about viewing the tower’s stone gargoyles at a much lower level than originally intended, there is the added advantage that the iconography of the carved stonework can now be more easily read. In celebration of shared heritages, Scottish thistles and saltires sit alongside representative New Zealand plants and birds.

The new St Andrew’s Centennial Chapel also explodes the modernist myth that integrating new and old building elements will inevitably result in a compromised design. The finely detailed elegance of the new steel and glass structure gains richness and resonance through its juxtaposition with the traditional building materials, repurposed doors and windows and reused furnishings. Such a layering of meaning would have been virtually impossible to achieve in a purely modern design.

That the building evokes the work of Carlo Scarpa, in its subtle interweaving of new and old, is a further indication of just how successful Architectus has been. For a school that places a high value on its traditions, its distinctive combination of Scottish and New Zealand heritages and the importance of life’s spiritual dimension, there can be no more fitting way to celebrate its centennial in 2017. 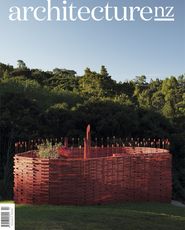 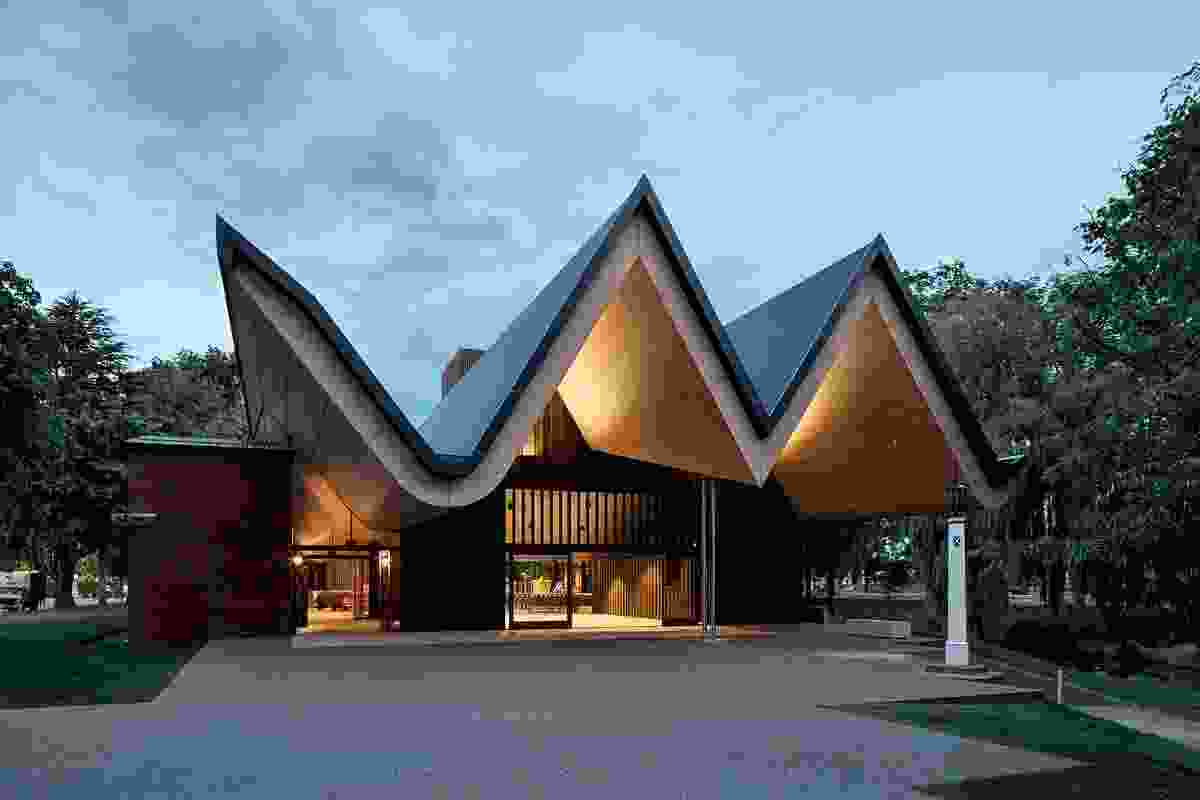 The folded geometry of the chapel’s roof, with its ridges and valleys, is reminiscent of the first church buildings in Canterbury, the ‘V-huts’. 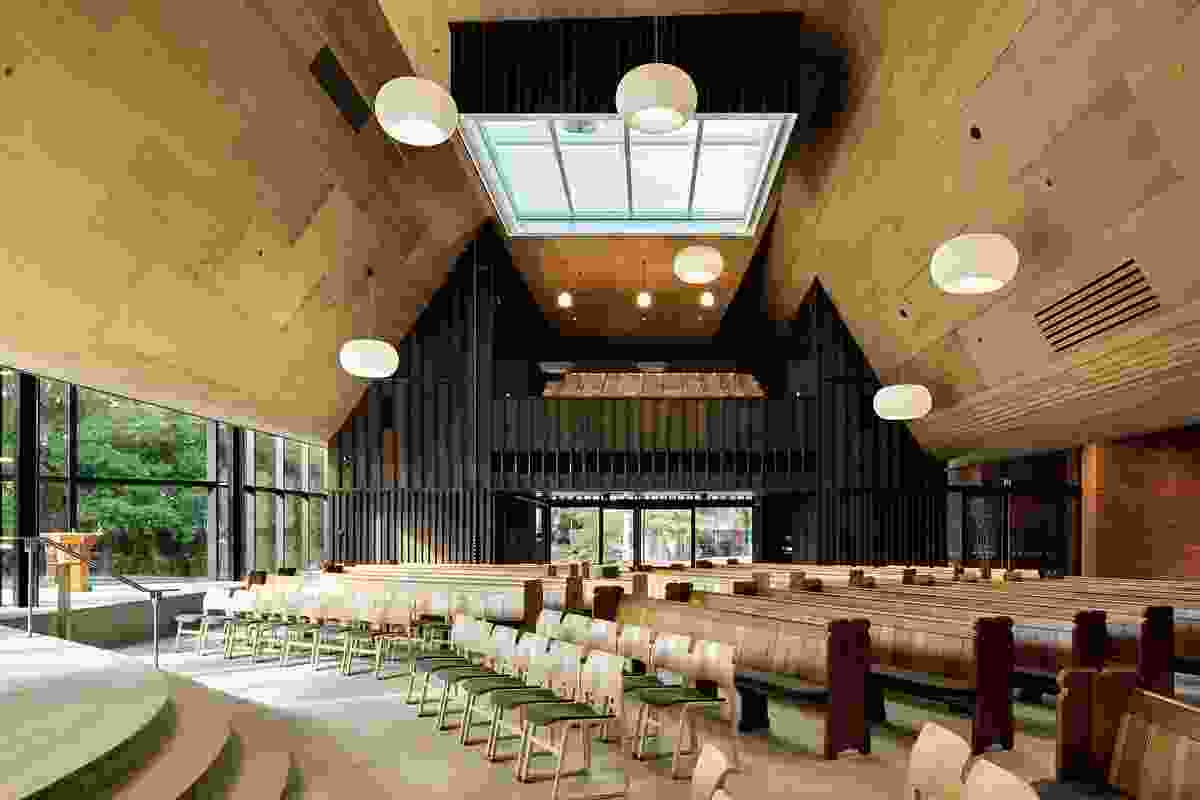 The orientation of the pews allows the congregation to form a relationship with the college community. 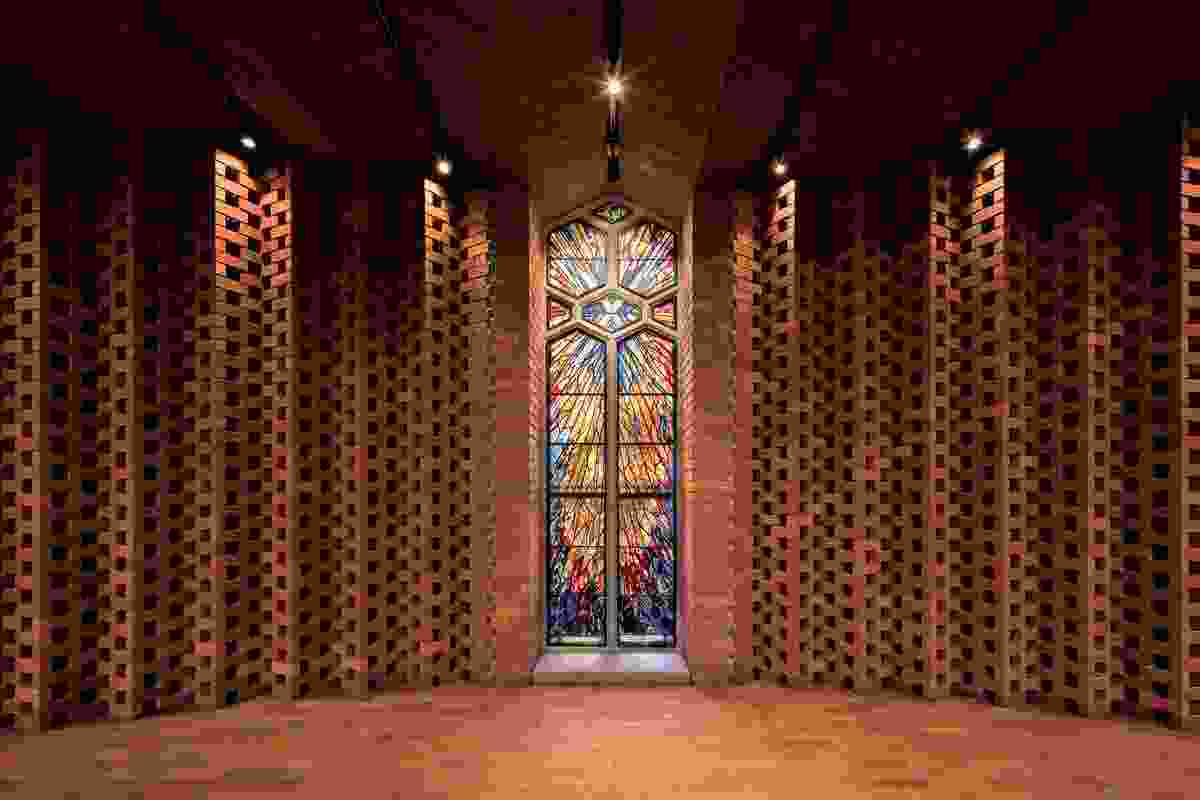 The folded brick screen behind the baptismal font incorporates a salvaged stained-glass window. 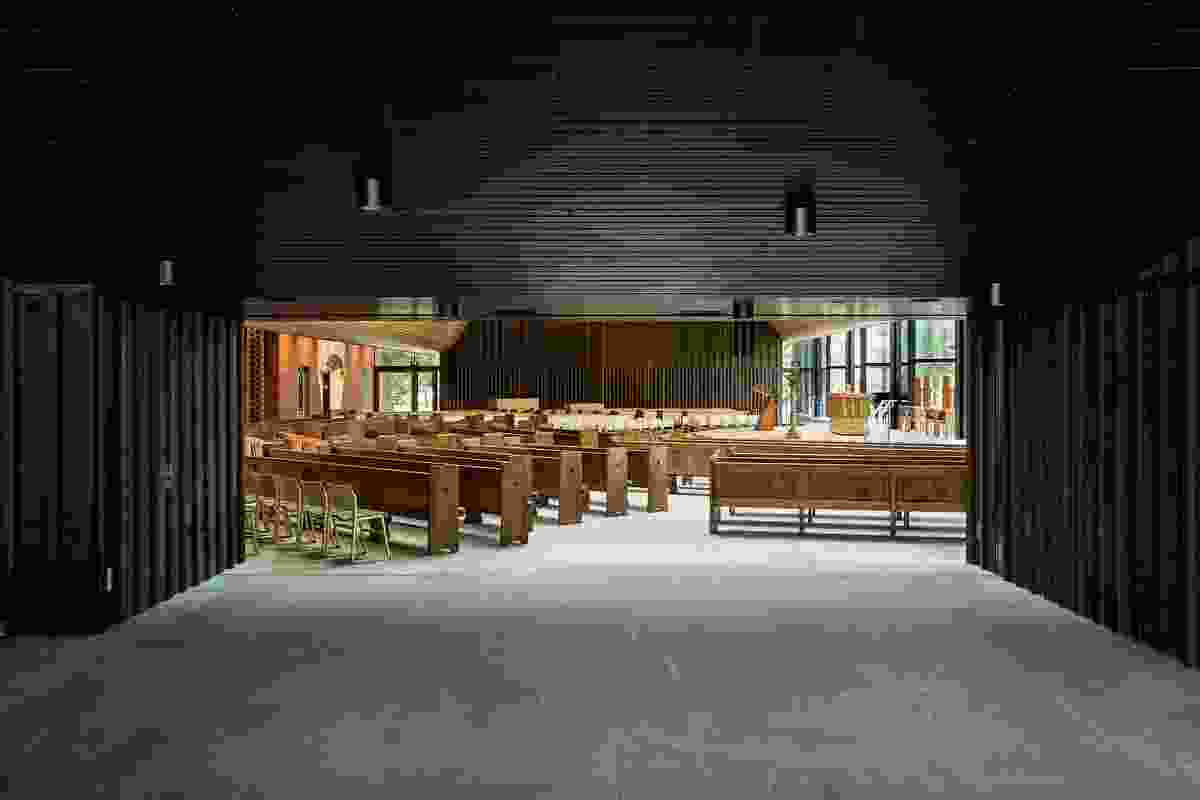 View from the foyer into the nave. Natural materials, both old and new, add warmth and drama to the interior. 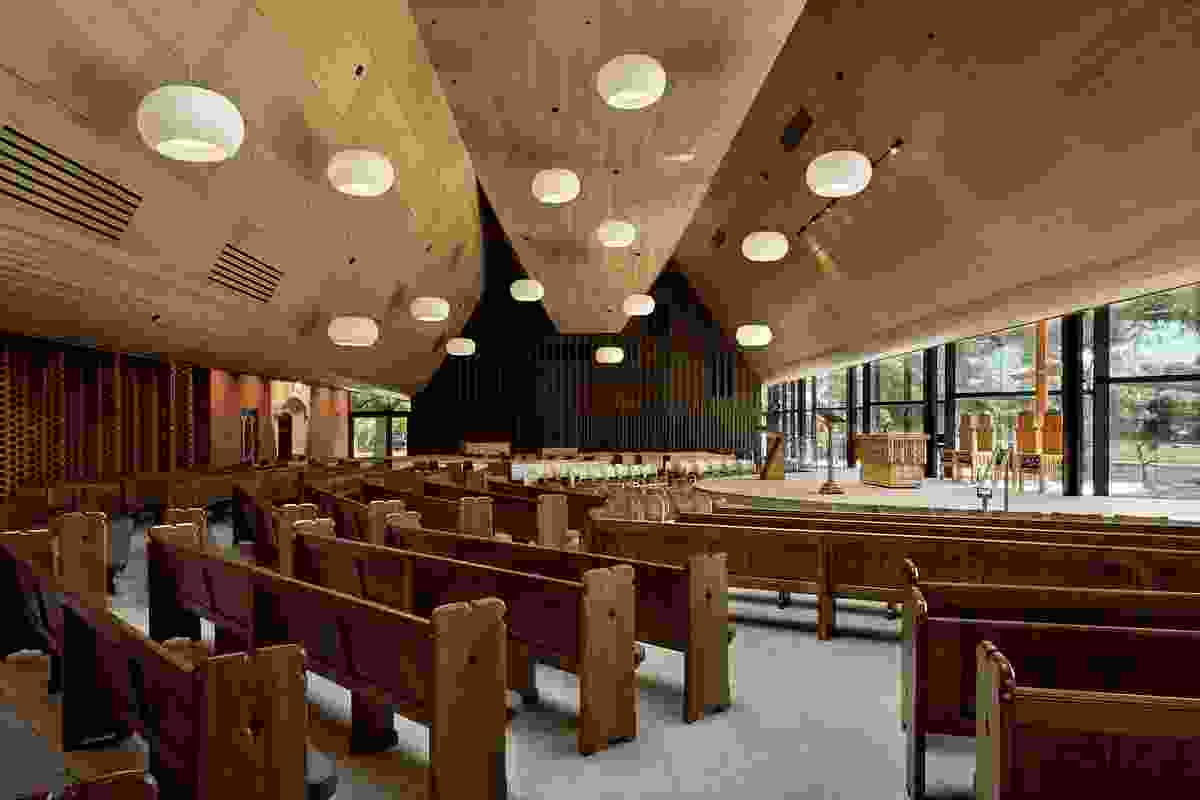 The overall organization of pews and seats is arranged as a collection of seating groups, placing an intermediate scale between the individual and the group. 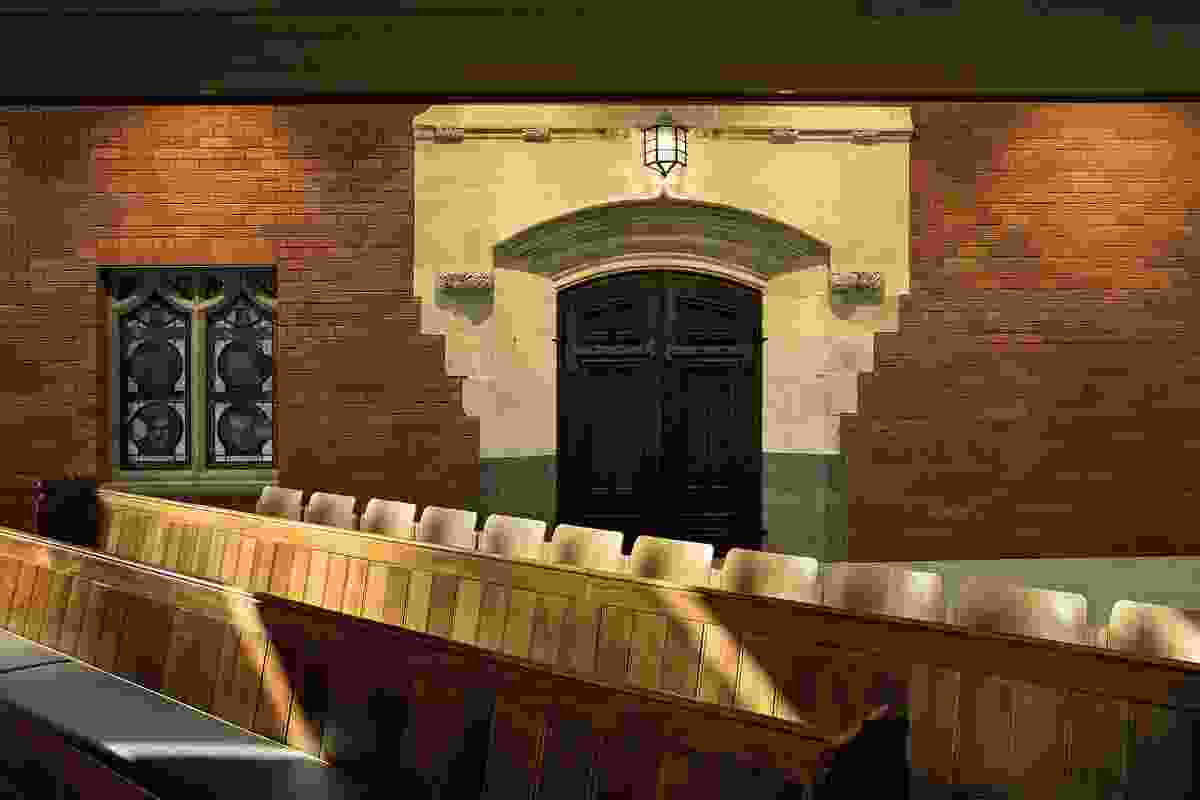 The chapel explodes the modernist myth that integrating new and old building elements will inevitably result in a compromised design. 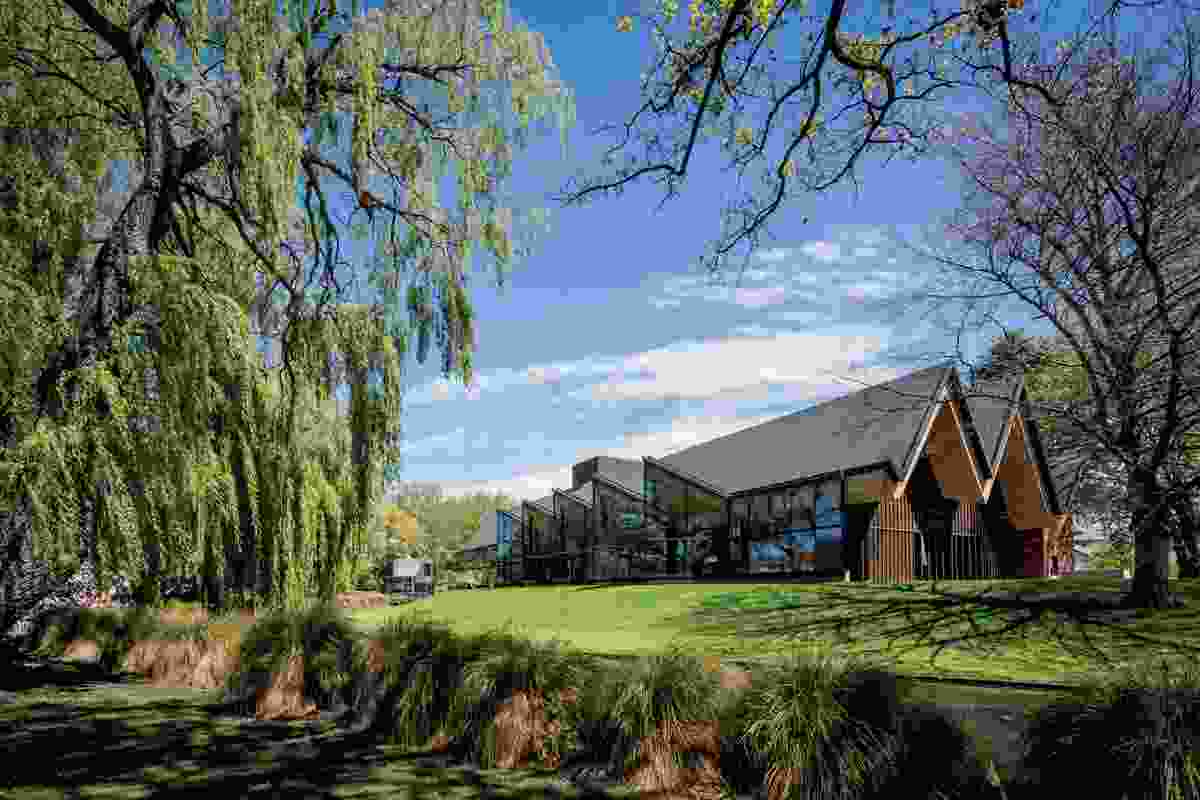 View from St Albans Creek of the new chapel, which generally occupies the footprint of the old Chapel. 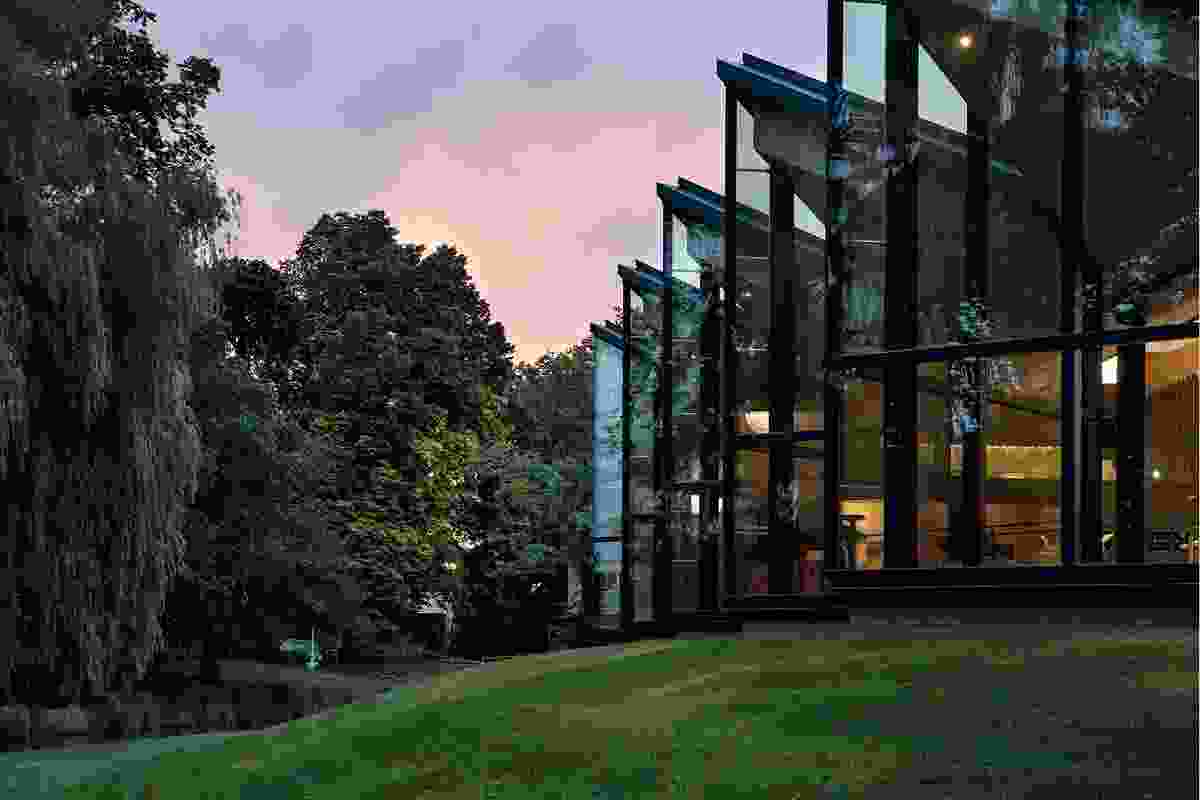 The folded glass wall on the southern side is light and ethereal, a window to St Andrew’s College and the mature garden landscape. 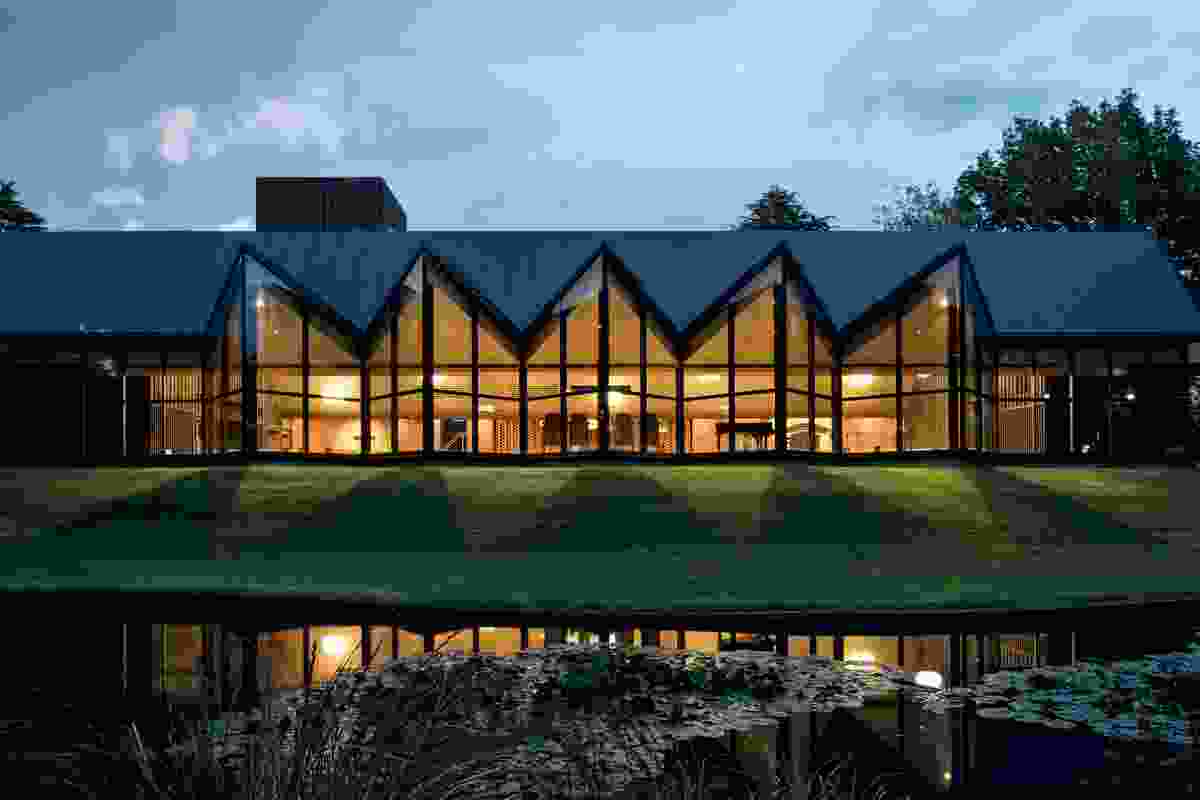 Above the footprint of the old bell tower, a ‘lantern’ stands in its memory and contains the bell. It punctuates the folded roof and acts as a skylight. 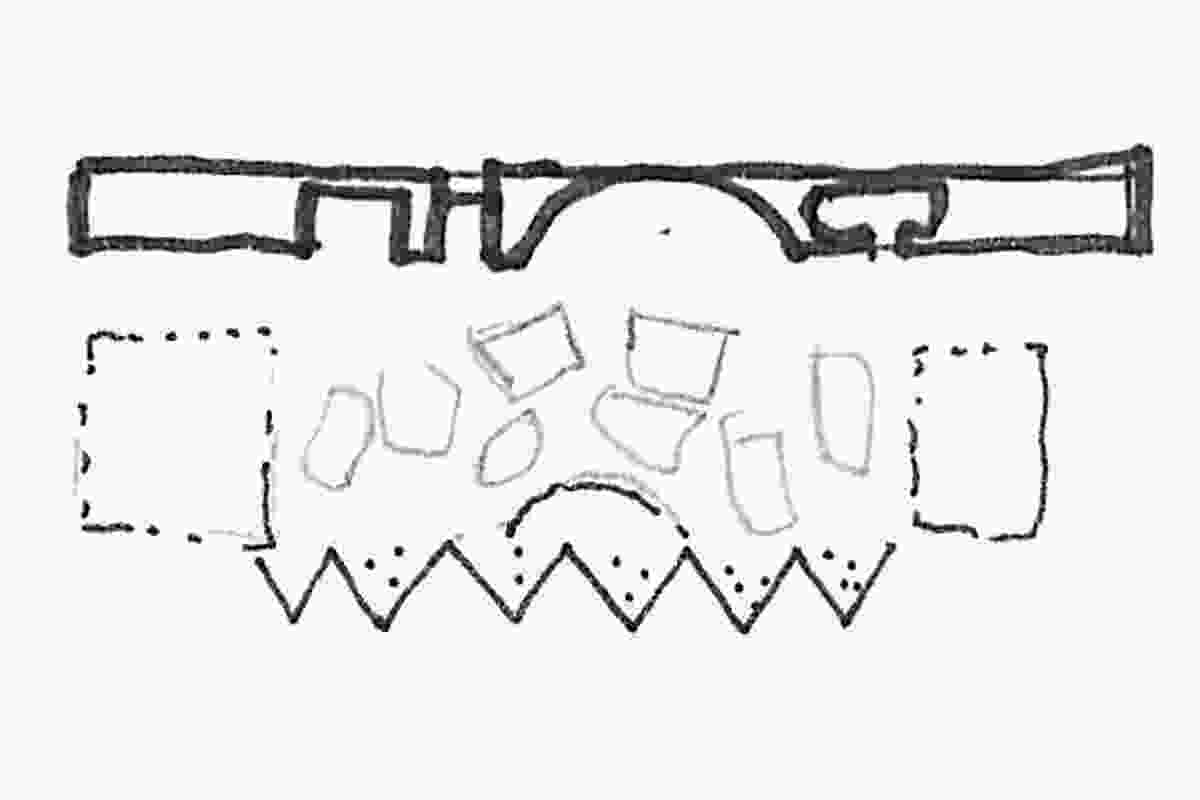 Architect’s concept sketch for the plan. 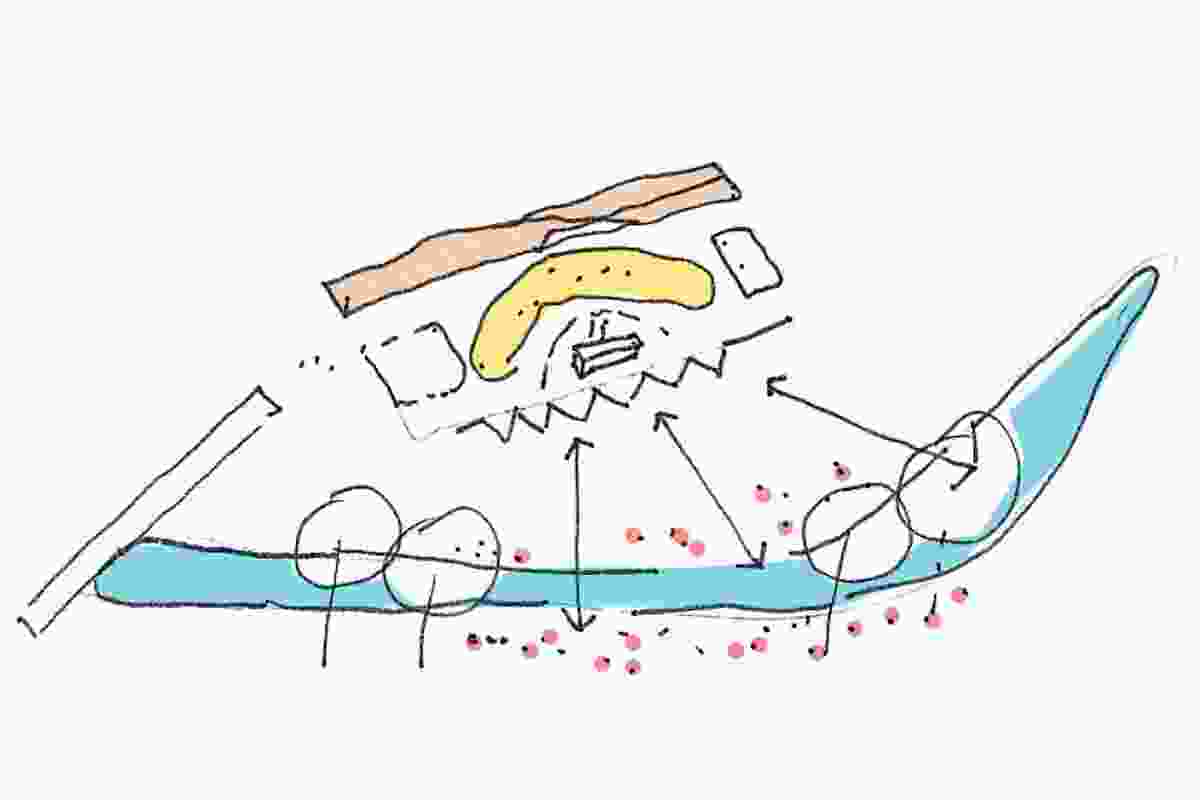 Architect’s sketch showing the chapel as ‘a stage’.