A lightweight steel roof is tethered above the brick pavilion, its underside emphasized by uplighting.

If we accept that our environment is both teacher and space for learning, it follows that our schools should endeavour to create the highest-quality built environments within the modest means at their disposal. Success in this requires a combination of design intelligence, a close working relationship with the client community and a desire to make the most of the contextual framework. St Ignatius School in Toowong, Queensland, was experiencing diminishing enrolments, largely due to a shortage of outdoor play space.

A project was conceived to transform the school’s underutilized tennis courts into a new playing field and pavilion, which was to be funded through a combination of land donation, fundraising, in-kind contributions and support from the federal government’s Building the Education Revolution (BER) program. What could have been a simple sports field and spectator stand is, in the hands of architects Richards & Spence, a carefully orchestrated sequence of landscape rooms and vistas.

The school is dominated by the St Ignatius Church, an Italian Romanesque polychromatic brick edifice completed in 1930. The journey to the new playing field and pavilion starts from street level via a ramp parallel to the main church that winds up to the new elevated playing field and terminates in an upper-level outlook space with expansive views of Brisbane’s CBD. A diversion part way along the journey continues to a higher plateau on which is perched a heritage-listed residence, Goldicott, purchased in 1903 by the Sisters of Mercy.

Brick is dominant, echoing the site’s material context. Brick retaining walls needed to construct the platform for the new playing field have been extended higher to create the character of a walled garden. The sea of chainlink surrounding the walled garden does its best to enhance the illusion and perhaps, through the invasion of climbing plants, the real thing will in part be the result.

The new pavilion is situated at the hinge point between the playing field and the convent. The ground level of the pavilion is constructed with brick as an extension of the retaining walls, with a folded lightweight steel roof tethered overhead. The emphasis on the underside of the roof enhances the effect of the journey up and of arrival. The fold of the roof gathers in a wide central gutter and downpipe that collects water to maintain verdant conditions during Brisbane’s dry spells. Perhaps a more articulated detail at this point could have revealed the discharge of water more powerfully and underscored the importance of water in our environment.

The rear brick wall of the pavilion terminates with a sweeping curve that closes on itself to define the accommodation, which comprises toilets, storeroom and a commercial kitchen. A stair running along the rear wall leads to an elevated lookout space on top of the main accommodation. This space is used as a spectator’s vantage point and outdoor learning area by day and as a space for social gatherings after hours. An established poinciana tree has been retained to provide screening and protection from the south. A random layout of glazed portholes in the concrete slab brings dappled light into the toilets during the day and, at night, light from below illuminates the roof overhead.

The lightness of the roof is enhanced by the way it is hung from a steel superstructure that spans overhead. One could focus on the object and draw parallels with a cloud or a white coronet; however, the skilful scaling and folding are primarily aimed at mediating views between the plateau, the white eaves line of the convent and the city panorama. This aspect is difficult to appreciate through photos that focus on the form of the roof rather than its mediating qualities. From the playing field, the opening up of the roof frames reveals the side elevation of the convent, while from the lookout space the fold of the roof frames the view of the city. Looking down from the convent, the roof presents a thin profile so as not to interrupt city views but at the same time it allows the sisters to see children playing on the field below.

The separation of the articulation of a heavy base as a terraced platform from a floating roof is reminiscent of conceptualizations of buildings in the landscape such as Utzon’s idea of “earth and sky.” This metaphor enables the pavilion to be conceptualized as a landscape or an occupied ruin, with the roof defining the place of refuge. The allusion will be more persuasive once the brick has had a chance to weather and the vegetation time to flourish, and perhaps a greater articulation and patterning of brick coursing may have helped to further emphasize this.

The architects stress that this is a building of endurance, timelessness and graceful aging, and this is true. With its set of simple, fundamental design concepts and thoughtful but effective manipulation of space and material Richards & Spence has delivered a project that draws the school together on many levels. These spaces will hopefully live on in the memories of the children who play there. 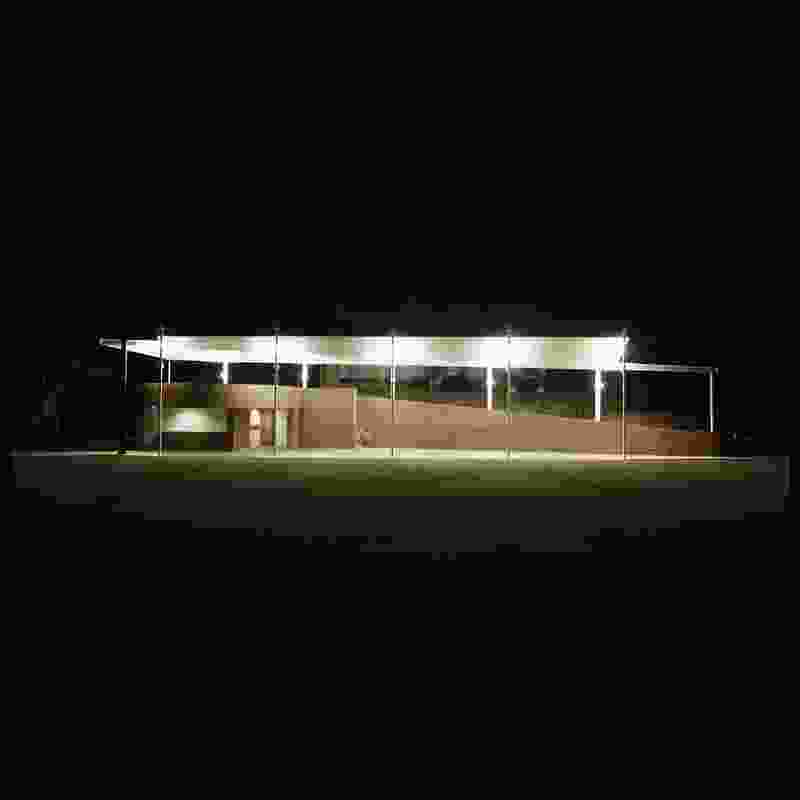 A lightweight steel roof is tethered above the brick pavilion, its underside emphasized by uplighting. 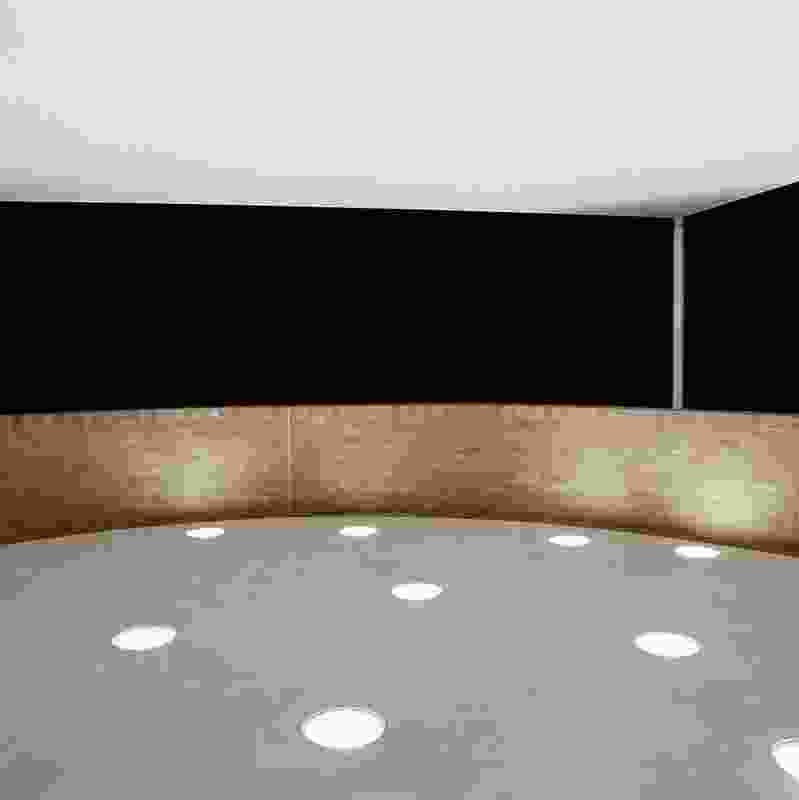 Glazed portholes in the slab allow light from beneath to illuminate the viewing platform. 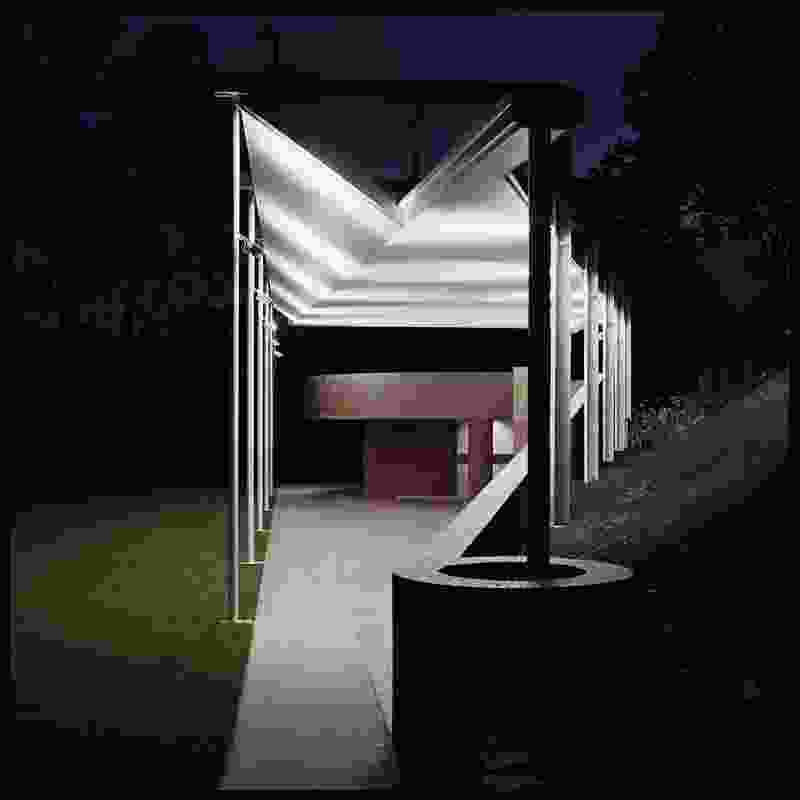 The fold of the roof gathers at a central gutter. 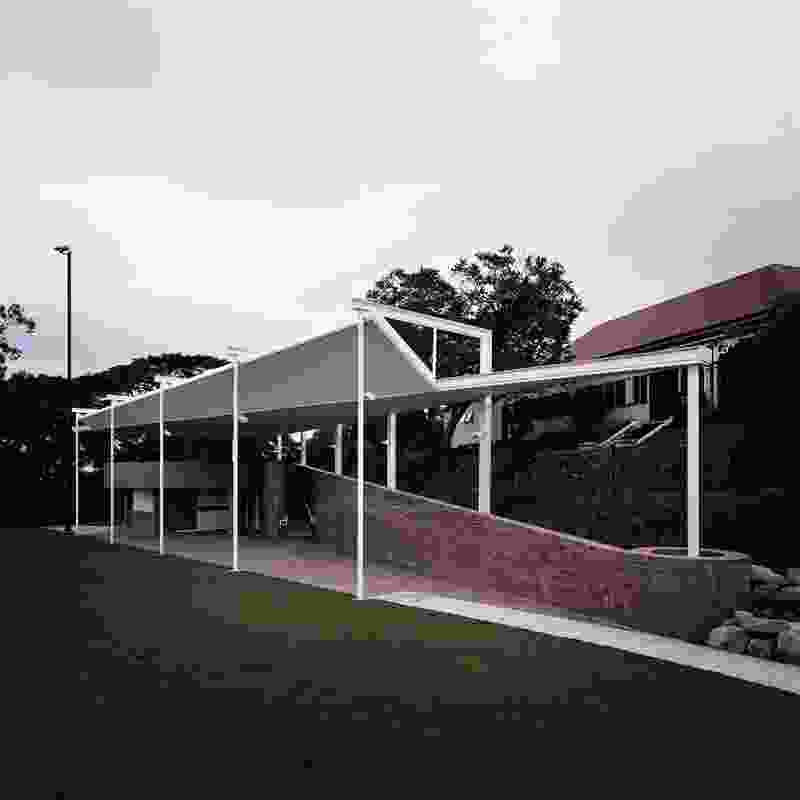 The brick retaining wall at the rear of the pavilion rises to enclose the viewing platform. 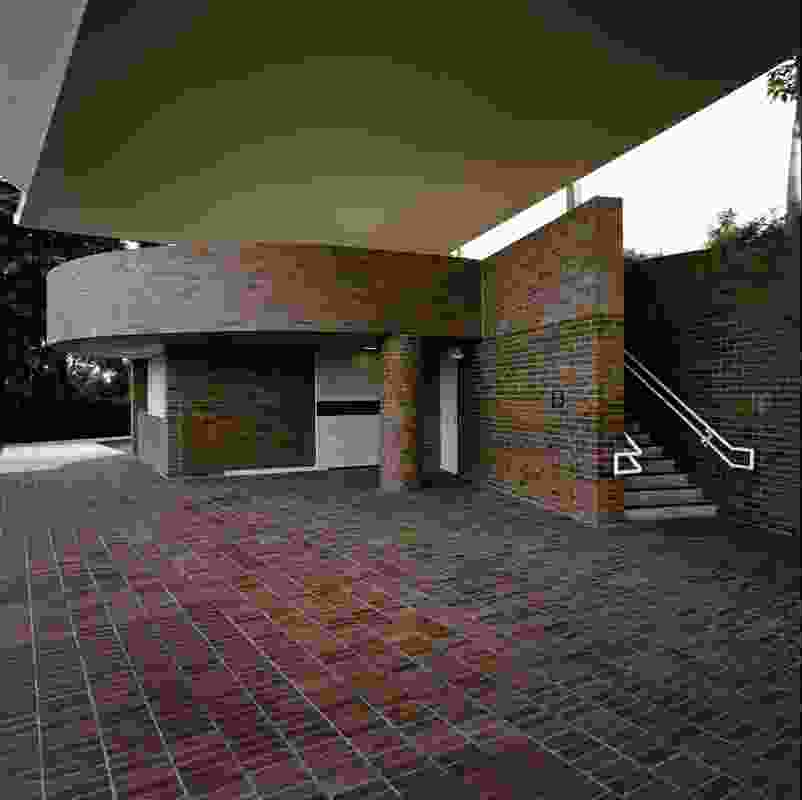 The lower level of the pavilion accommodates toilets, a storeroom and a commercial kitchen. 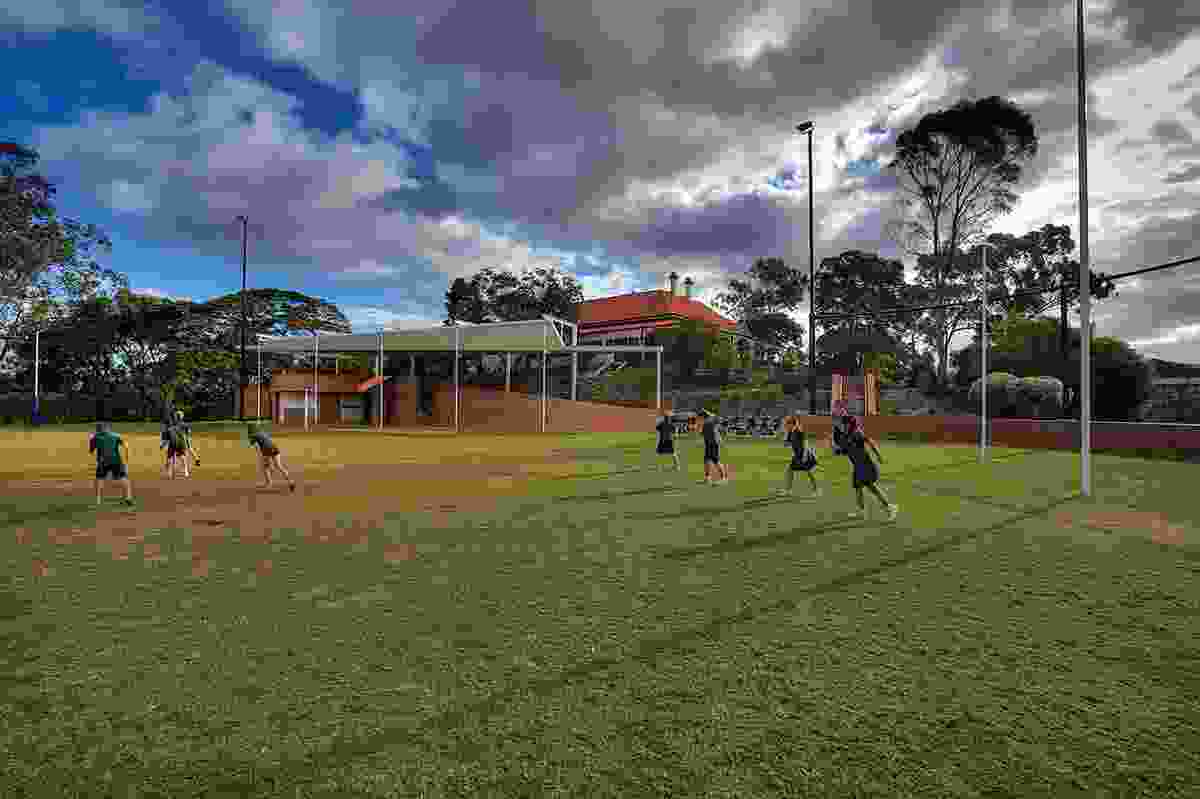 The pavilion is located between the playing field and the school’s convent.