The extension to this double-fronted Victorian villa by Clare Cousins Architects is as much a reflection of the owners’ personalities as it is a dialogue between old and new buildings.

North and south wings of the house are united at an external courtyard.

Contemporary renovations of so-called “character” houses tend to follow one of two conventions. One might see the architect attempt to return the existing dwelling, outside and in, to an approximation of its original condition, adding a new, distinct volume to the rear of the house to accommodate modern lifestyle demands. This approach assumes that it’s better to leave “modern” and “heritage” architecture to their own devices. The other convention might see the architect opt to gut the building, remodelling its innards to create an image of sleek modernity, even while its antique carcass is grudgingly retained as a sop to the local council’s heritage officer.

Not all renovations, of course, fall along these party lines. Clare Cousins Architects’ St Kilda East House, a renovation of a Victorian double-fronted villa in Melbourne’s inner south, bears many of the tastefully restrained trappings of your typical contemporary residential work – an emphasis on natural or expressed materials; generous spaces and ample light; furnishings, fixtures and fittings that blend choice mid-century design pieces with more recent additions to the canon. In subtle ways, though, it is a break with convention, a happy blend of Victorian and contemporary architecture where character is seen as being robust enough to withstand a bit of modernization, but also something more than just surface detail.

Facing the road to the west, St Kilda East House’s existing Victorian villa has all the hallmark decoration you would expect of its period – polychromatic brickwork, a portico fringed by lacy iron, Baltic pine floors, stained-glass windows and elaborate plaster ceilings. To avoid a sense of disconnection between old and new, the extension borrows some of this material palette – it is built largely of recycled brick, and timber floors feature in many of the living and circulation areas. Refreshingly the new design doesn’t respond just to the materiality of the older building, but also to the planning. To this end, the house retains what Clare Cousins describes as the “cellularity” of the original building, rather than following a more typically contemporary open plan. Counterintuitively, the hope was that this would allow for more flexibility of use.

The supposed benefits of open-plan living are largely accepted as a given nowadays, flexibility being one of them. When this idea came of age in the early part of the twentieth century, it was part of a suite of concepts associated with modernism that were, at least in some senses, a reaction to Victorian architectural mores. The architect Adolf Loos, who famously condemned the ornament beloved of the Victorians as crime (take that, scurrilous iron fretwork), valorized the idea of contiguous, continual space in his raumplan approach to spatial design, an early relative of the open plan later popularized by the modernists. This would have been anathema to the Victorians, who, obsessed with propriety, worked to keep everything in its proper place, segregated by walls and sealed behind closed doors.

While this primness doesn’t sit well with contemporary sensibilities, the open plan, despite its popularity, has its problems. Contiguous, continual space is not such an attractive proposition when the occupants of said space, in this case Clare’s clients, include a lively toddler and one parent who likes to spend his downtime playing big musical instruments. From a pragmatic, privacy perspective then, Clare rightly identified that the Victorians were on to something.

The design retains much of the existing plan, but also extends its cellular logic into a new northern wing, which includes the toddler’s room and play area, and a spare bedroom. The logic hasn’t been unthinkingly adopted, though, and in keeping with contemporary preferences the kitchen, living and dining areas that form the southern wing are partially open. An internal courtyard, which the clients use as a dining area, divides the new wings from one another. This courtyard is set at ground level, slightly lower than the wings on either side, with concrete pavers forming a floor that continues outside to become an exterior courtyard – a blurry boundary between indoors and outdoors that is also decidedly un-Victorian.

Careful consideration of sight lines helps soften rigid distinctions, too. Pop-out glazing on the eastern elevation offers views to the flourishing garden to the east (by landscape designer Fiona Brockhoff), but the two wings also stare at one another through large sliding glass doors. In addition to bringing natural light deep into the plan, this allows the clients to keep an eye on their toddler’s bedroom and play area from the main living space.

St Kilda East House cheerily brokers a dialogue between old and new buildings, Victorian ideals and contemporary norms. It’s worth mentioning that this openness also extended to the ideas of the clients, meaning the house is as much a reflection of their personalities as it is the result of these more abstract architectural concerns. This led to the sombrely elegant A110 pendant lamps by Alvar Aalto that hang over the dining room table, the tiny porcelain doorknobs that offer bright bursts of colour in the northern bedrooms, and the boldly geometric concrete tiles in the bathrooms. My favourites, though, are the porthole windows on the eastern elevation of the southern wing. On the face of it, they are pure whimsy, a foil to the building’s boxy form. Early in the morning on a good day, though, sun streams in through these eastern apertures, transforming the interior in a silent melody of refracted light – a criminally sublime start to the day, you could say, and a function of pure delight in the best Victorian decorative tradition.

The print version of this article defined Adolf Loos’ raumplan as a ‘free plan’, which drew a misleading connection to the plan libre. This was corrected in this version on 11 August 2014. 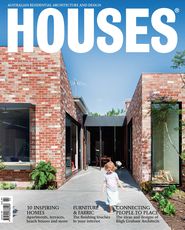 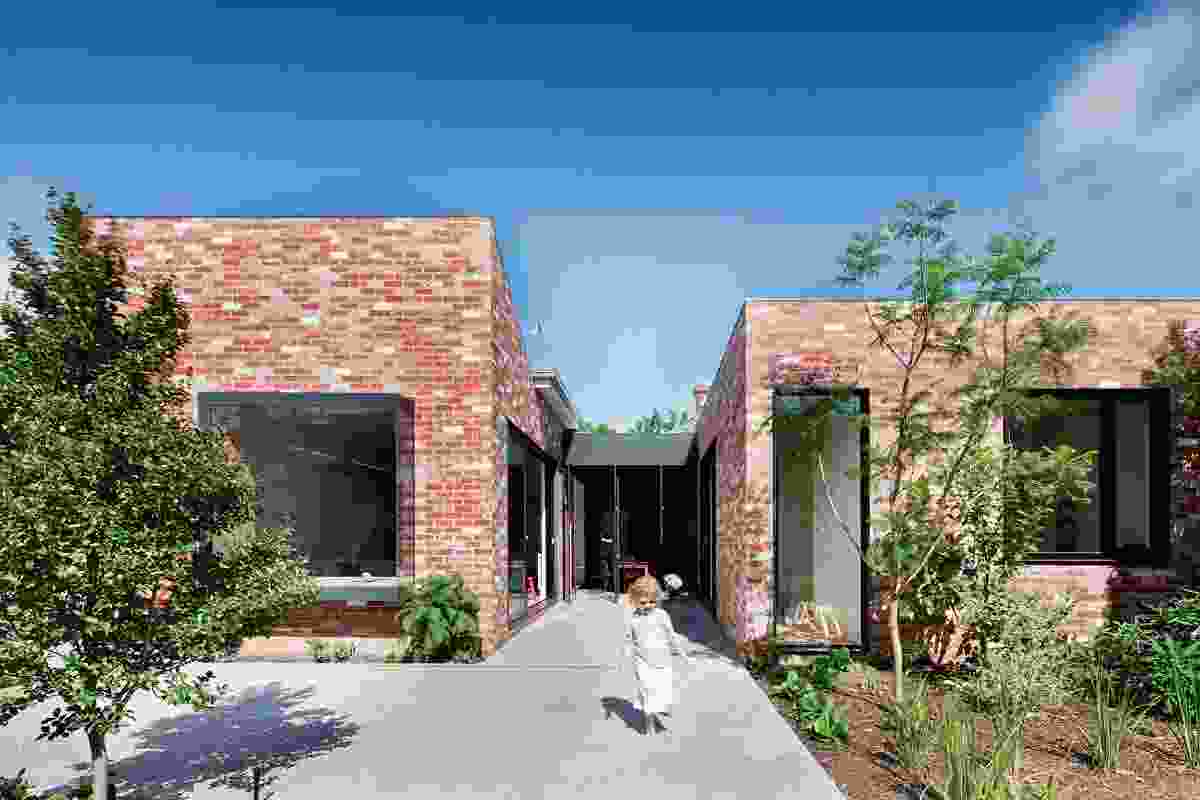 North and south wings of the house are united at an external courtyard. 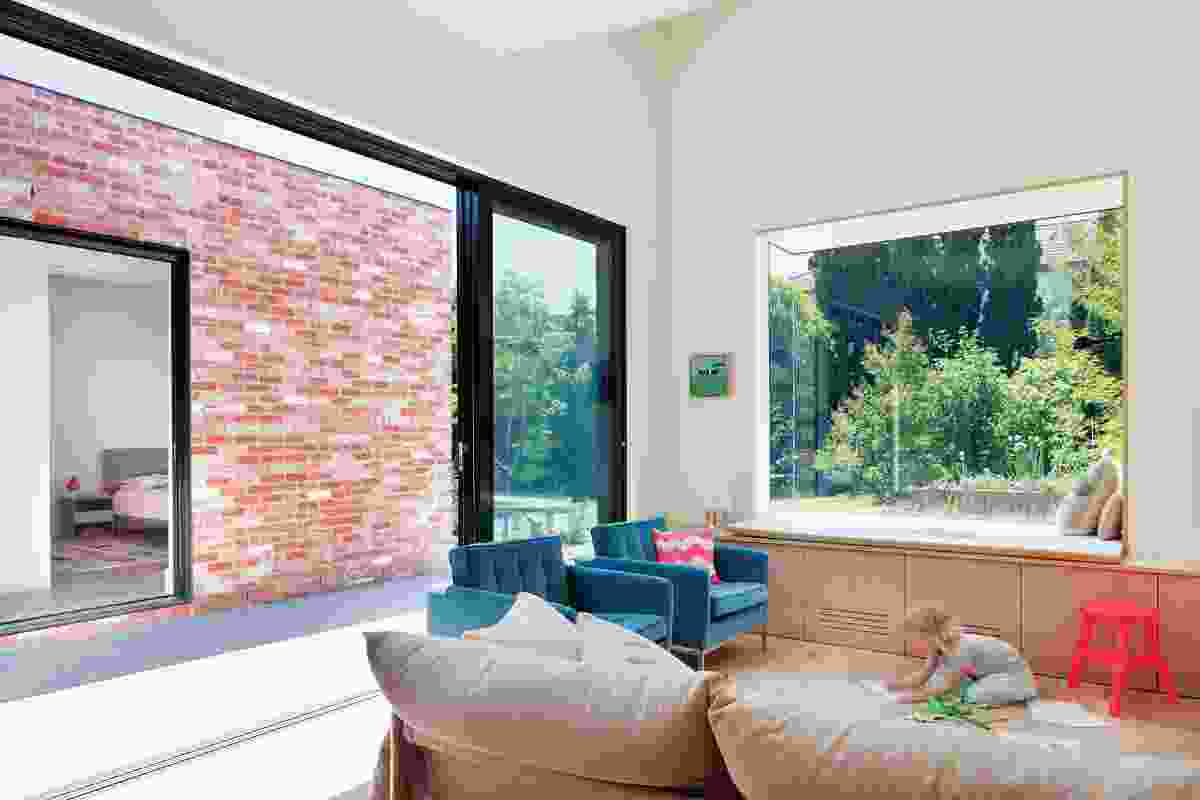 Large glass sliding doors on each wing allow the parents to keep an eye on young children. 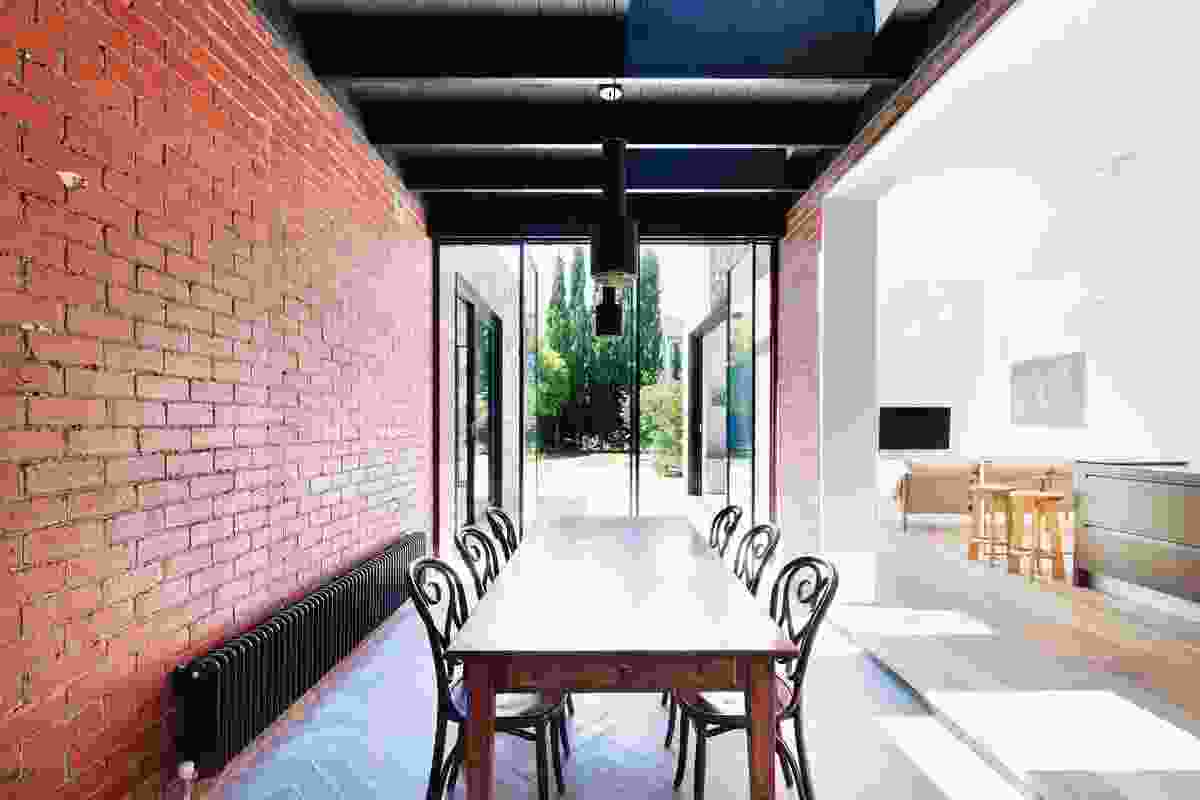 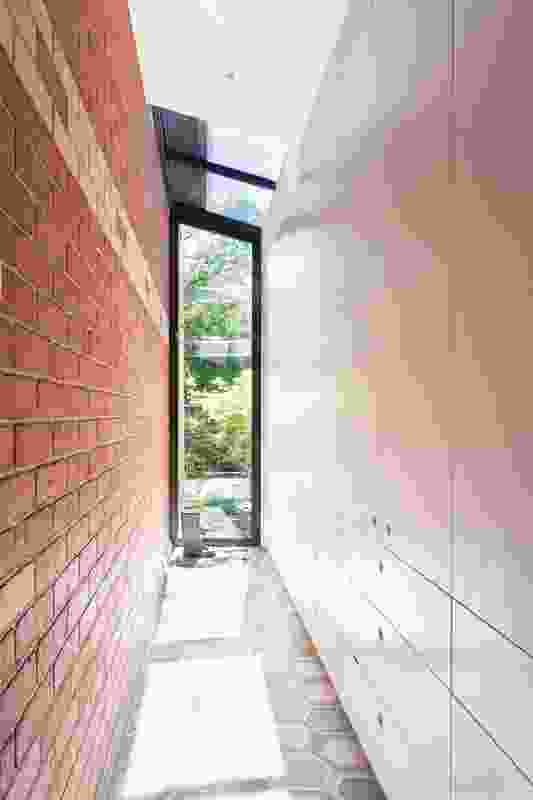 A window in the walk-in robe. 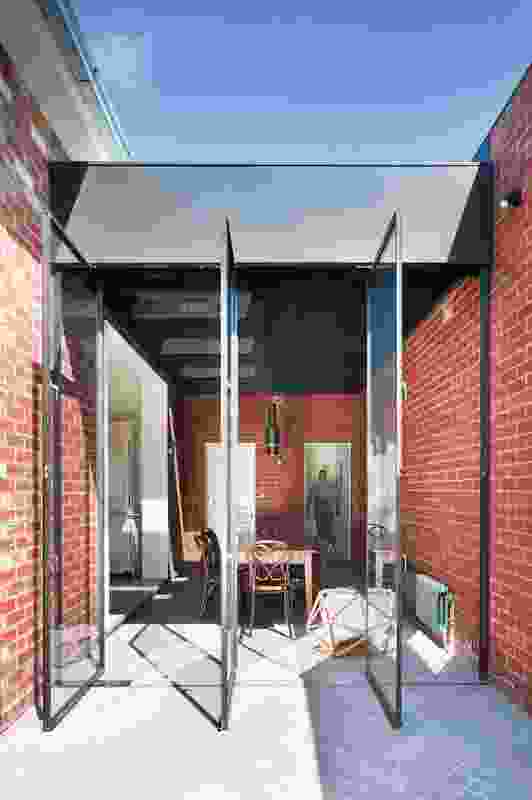 Concrete pavers are laid in a herringbone pattern. 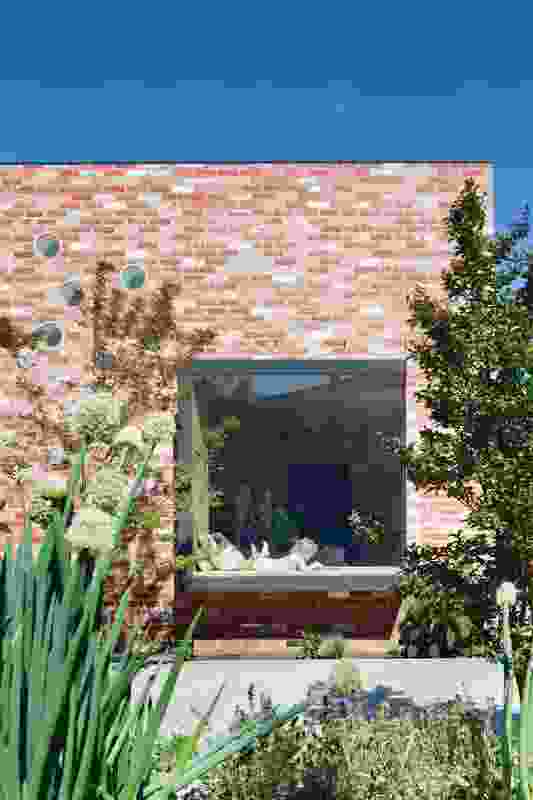 Pop-out glazing on the eastern elevation overlooks the garden. 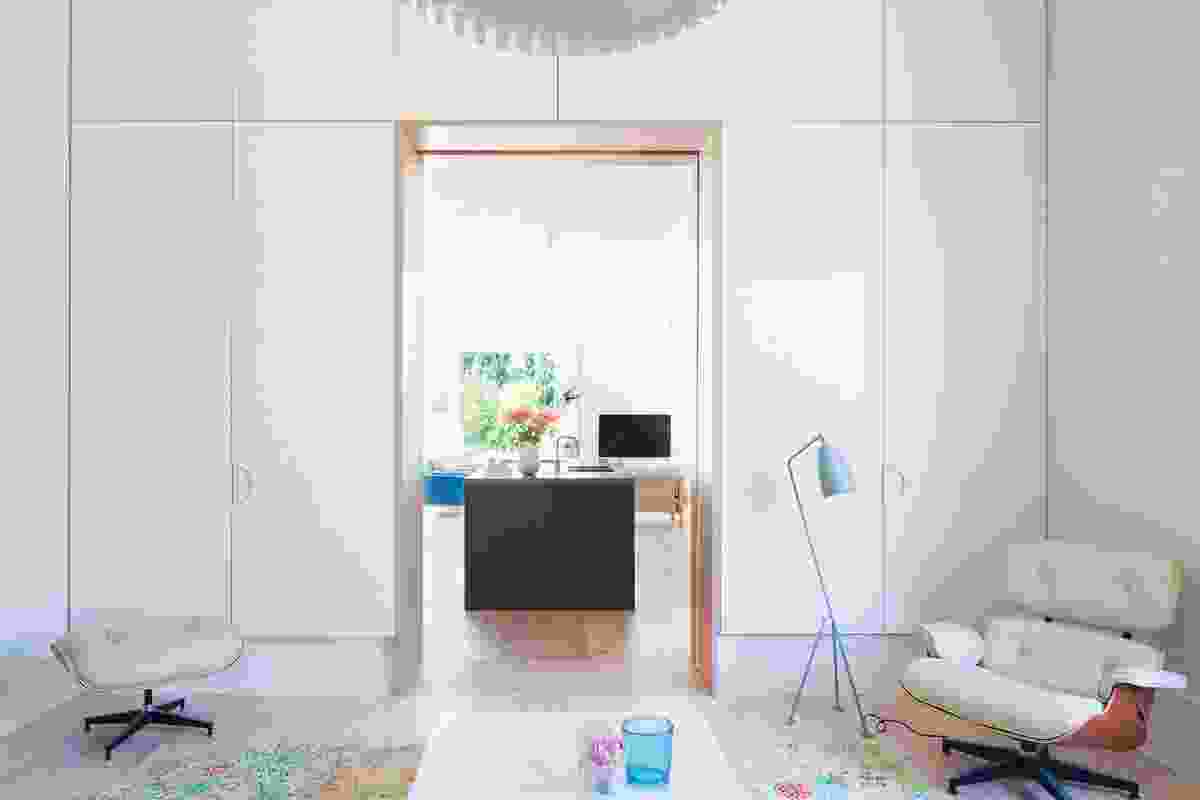 The new floor plan divides the house into a number of closeable spaces. 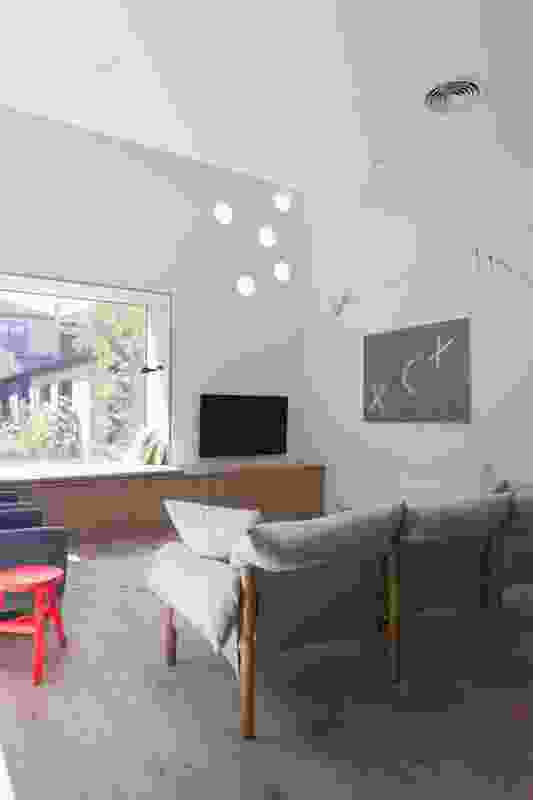 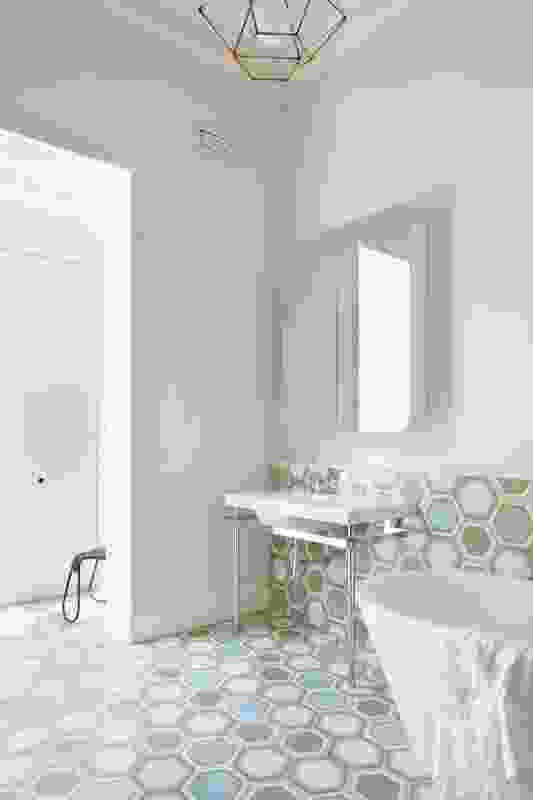 Hexagonal tiling in the bathroom is a nod to the Victorian era. 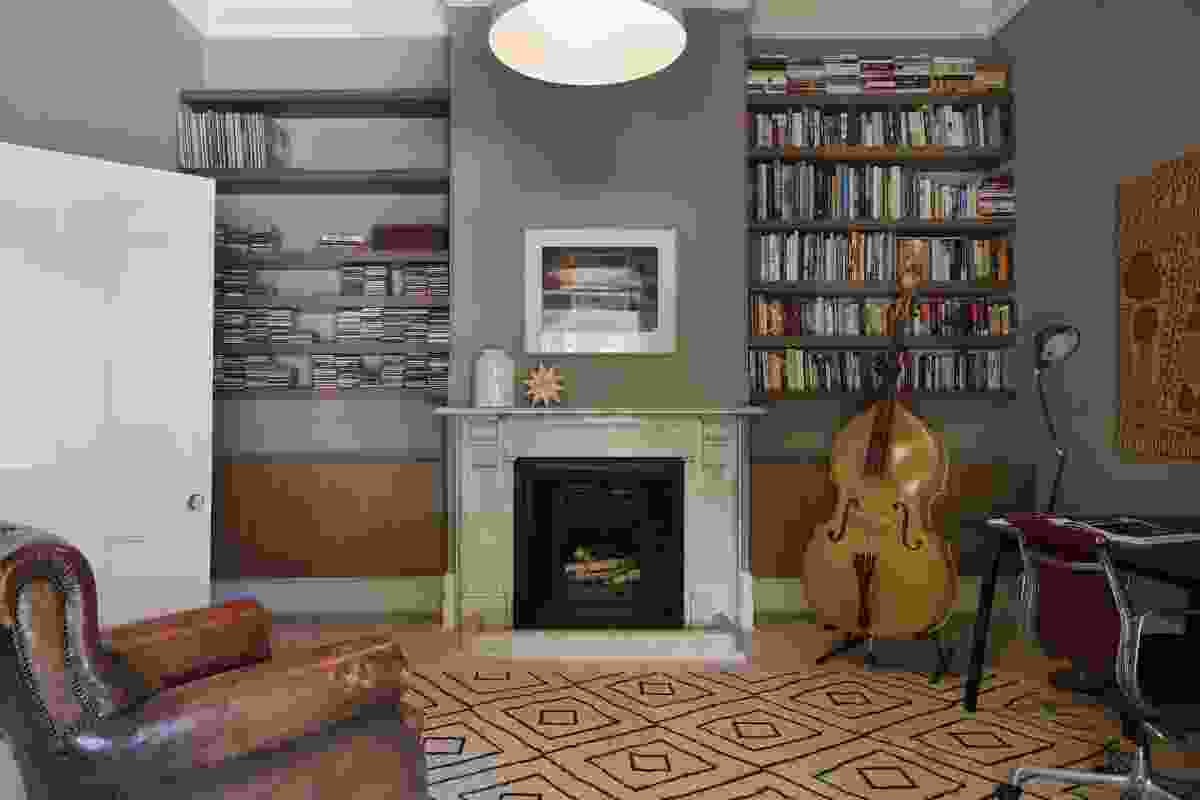 An original front room now converted to a music room. 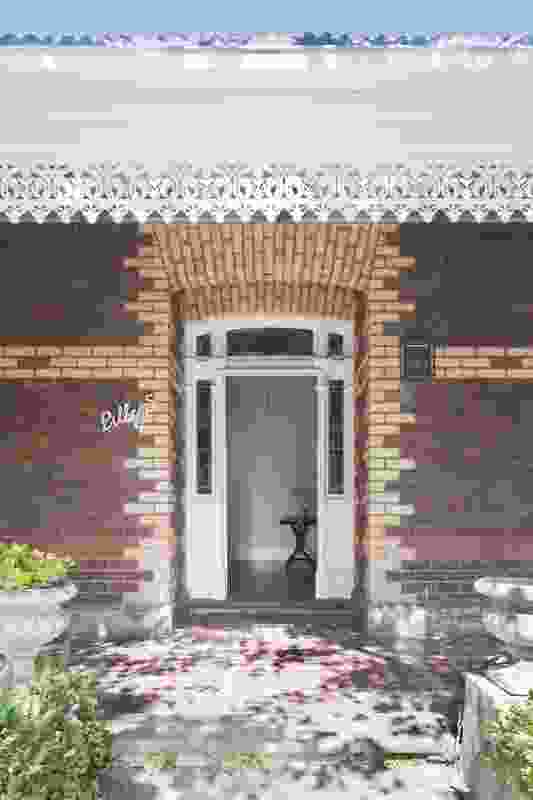